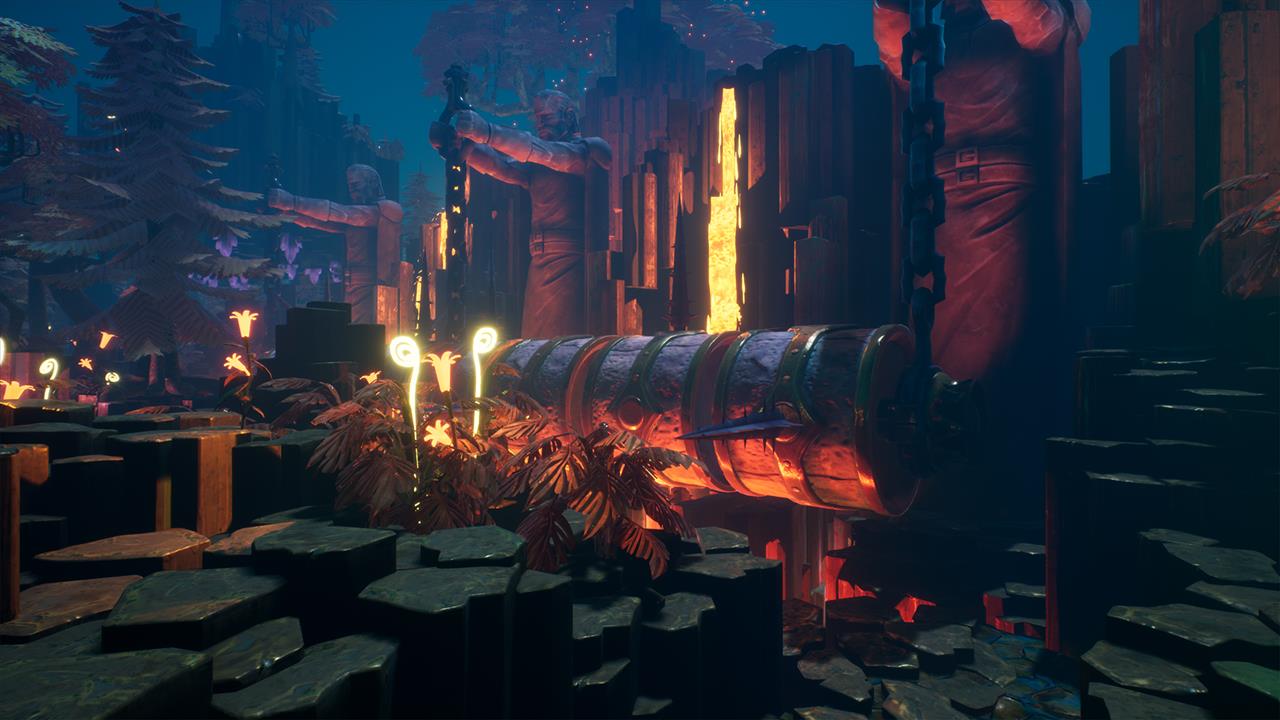 During these quiet days of being shut-in due to the COVID-19 crisis, it has been a welcome relief to step away from laboring on my PC for the day job, grab my Switch, and flop down on the bed for some dungeon crawling with Operencia: The Stolen Sun. This is a game that feels like comfort food to me, with its vivid cast of characters meeting some social need for companionship, despite the fact that they are only depicted as 2D comic-style drawings.

The witty banter of these characters around the campfire is one of Operencia’s many rewards, but it was surely the one that pulled me into this magical world the deepest. The seven or eight characters in Operencia are so distinct, so well-written, that I had a hard time picking from among them for my team of four to take into dungeons. They chatter among themselves while out in the world, and talk smack to enemies during battles. They aren’t quite the chatty Cathy’s that you would find in a BioWare title, but they are a lot of fun to be around, nonetheless. 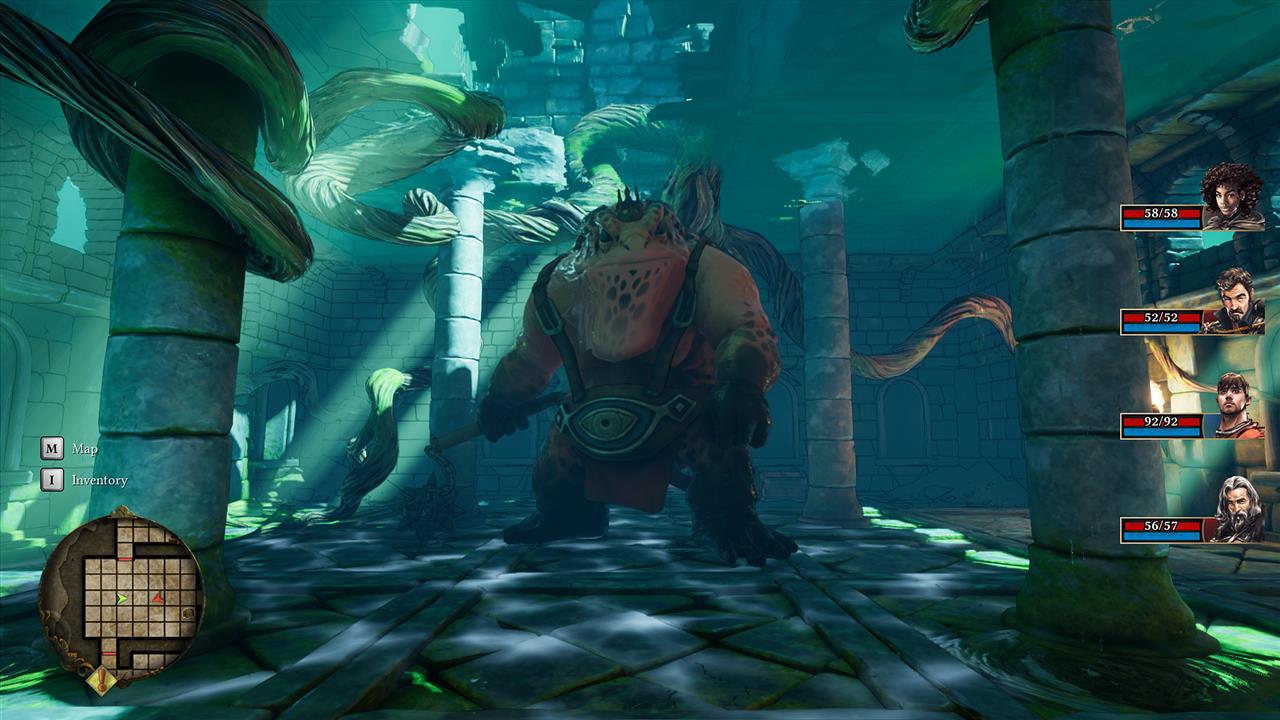 Operencia is a dungeon crawler, based on the legends and folklore of Hungary. If you aren’t familiar with these stories (as I wasn’t), they are wildly inventive. The lore in this game is rich, and it made me wonder what other country’s stories could be mined for entertaining gameplay purposes.

Operencia: The Stolen Sun has an interesting structure. Players run through a series of 13 dungeons. At first, I was confused and didn’t understand that these dungeons were distinct from one another. I was under the impression that they would transition from one to the next with no interruption, and I would be able to backtrack to an earlier dungeon. Not so. Instead, Operencia informs the player that they are about to leave each distinct area, and asks them if they are sure they want to go. If you still have unsolved puzzles or corridors yet to be explored, don’t take the bait and move on like I did the first time. You can’t go back, and are likely passing up some of the game’s best weapons and goodies. 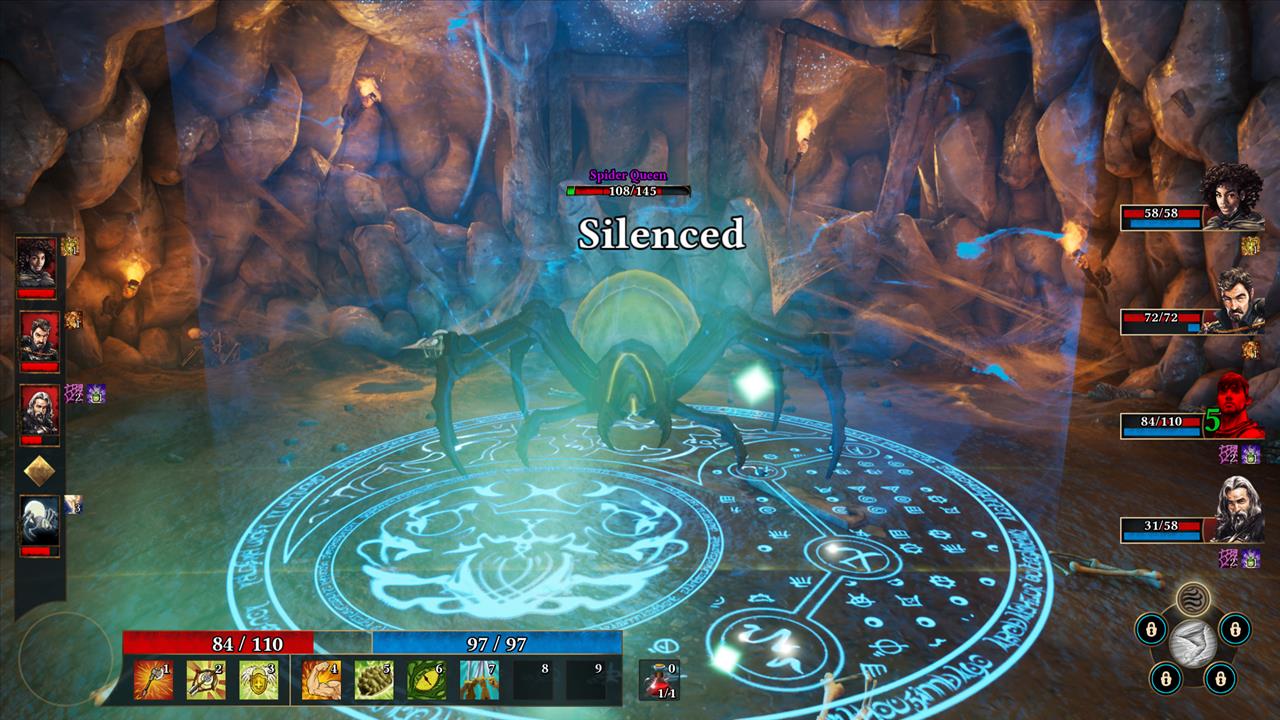 Players start with just one character, a farmhand who has been summoned to adventure by images in his dreams. Each character has a fairly extensive skill tree (you get one point to plug in to a skill per level gained), and this main character is fairly flexible as far as specialization. I turned my guy into a tank-y brute, bashing baddies with the biggest and most damaging weapons I could get my hands on. My farmer got the best gear, leaving the scraps for his buddies. What can I say? I’m selfish.

Before long, more characters are added, and you are managing a menagerie with a wide variety of skills as opposed to just one dude. Like most dungeon crawlers, characters move as a group, sliding over the grid in perpetual synchronization. The entirety of the game is played in first person. This is a smart choice, preventing the devs from having to render a ton of characters during battle sequences. You never actually see your guys outside of animated cutscenes, which allows for a fair amount of imagination. 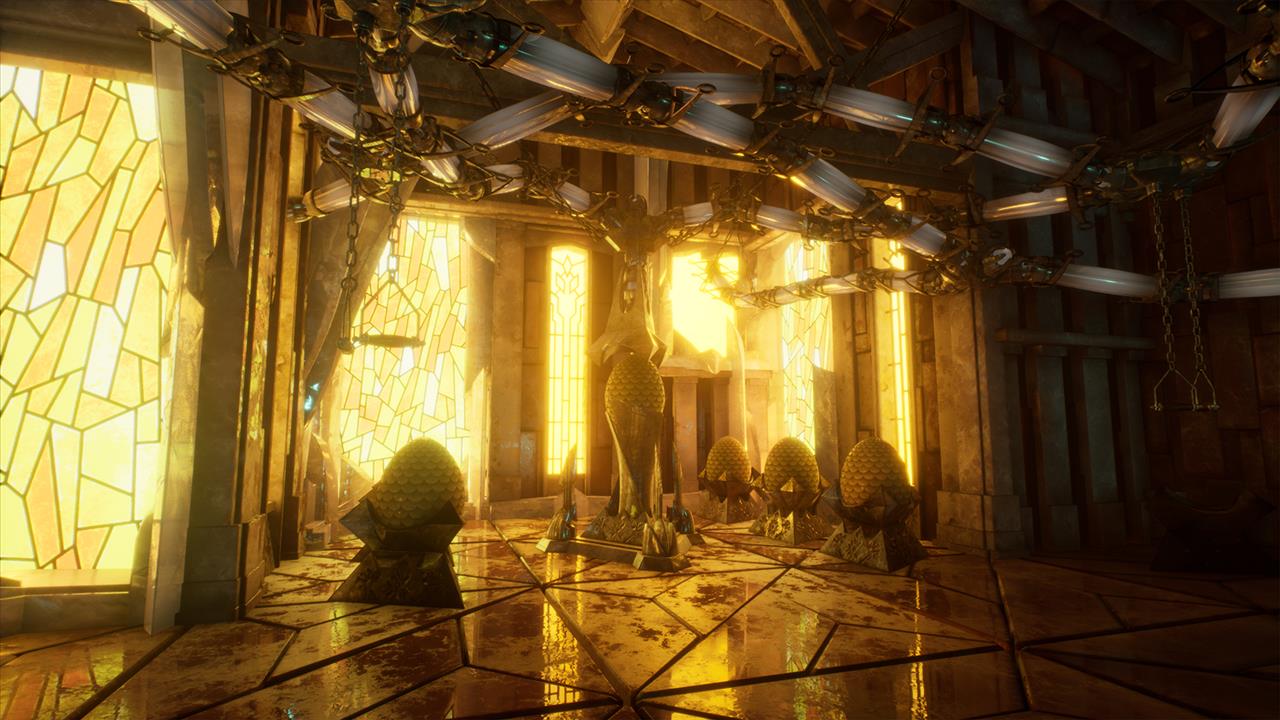 Even without seeing your characters, Operencia is a very nice-looking game. I wasn’t sure what the art style was going to be like after checking out screen shots. I was kind of assuming that the entire game would be rendered in the same art-style as the cutscenes. But in actuality, the game is played out with full 3D environments, with the player able to look around and turn freely. Though player movement is constricted to the genre’s usual chessboard-like grid, the ability to just look at the ceiling and floor feels freeing. I played Operencia on the Switch, and was very impressed by the visuals, even in handheld mode. We are talking at least Betheda-level environment rendering, which is nothing to sneeze at in a more modest title. Sure, there are some shortcuts taken, but in all, the game is damn impressive looking.

The dungeons are rather large and complex, with tons of interesting puzzles to solve and secrets to discover. Backtracking is often the order of the day, as you will find puzzle pieces long after you have given up and moved on. Luckily, when you do happen across an item that goes into an earlier puzzle, one of your dudes will pipe up with a comment like “I guess we know where that goes”. Though, if you are like me, you will likely sprain your brain trying to recall what the heck they are talking about. Operencia’s in-game map gives you a fair amount of information, including how many secrets remain in the dungeon you are currently exploring. It is entirely possible to beat a dungeon and escape without ever discovering a single secret. Disappointing, but possible. 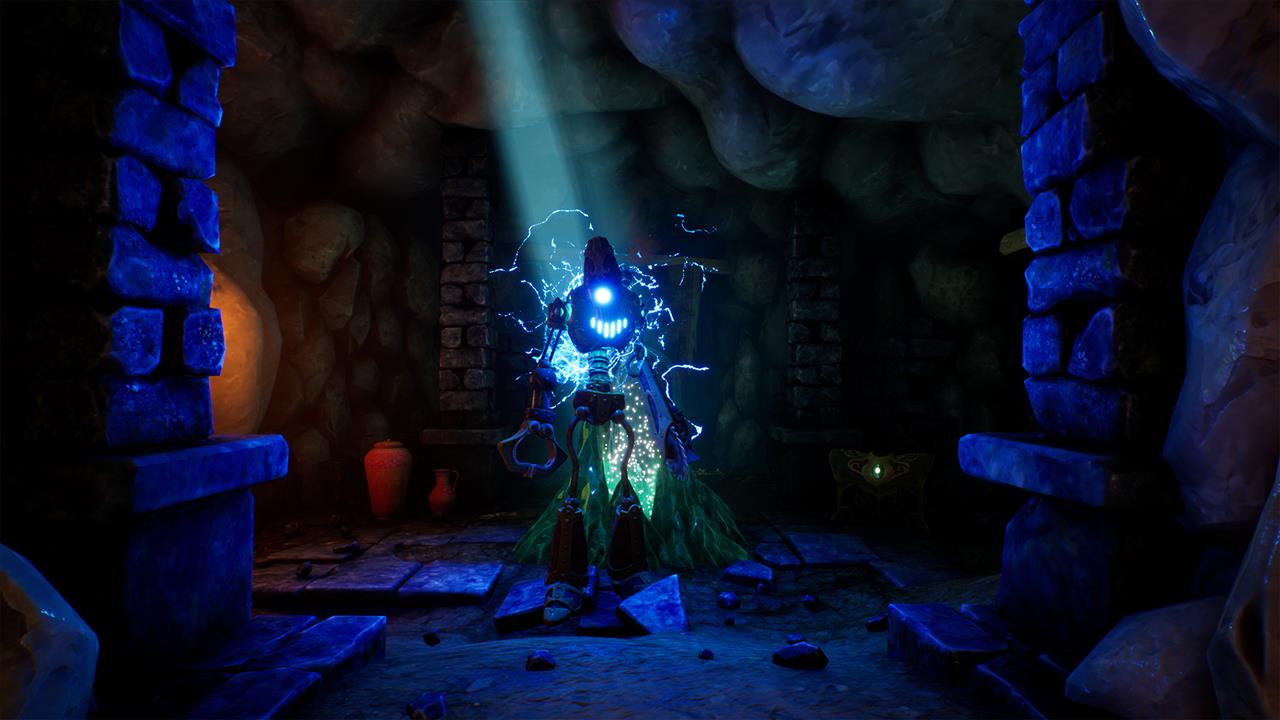 Combat in Operencia is strictly turn based, and is appropriately complex and deep without being taxing. Enemies appear on the battlefield across three planes of depth – close guys, medium guys, and ranged guys. Correspondingly, your team’s attacks and special moves are tiered to be strongest at one of these different ranges.

With weaker enemies (the skeleton warriors that never quite go away), I would hammer relentlessly on the individual bad guys one at a time with my default attack to whittle down their numbers, regardless of their placement. But with more complex or difficult baddies, more strategy is needed. I would typically have my thief hit the entire group with some DOT spells to soften them up, then carefully arrange my attacks to where they would be most effective. 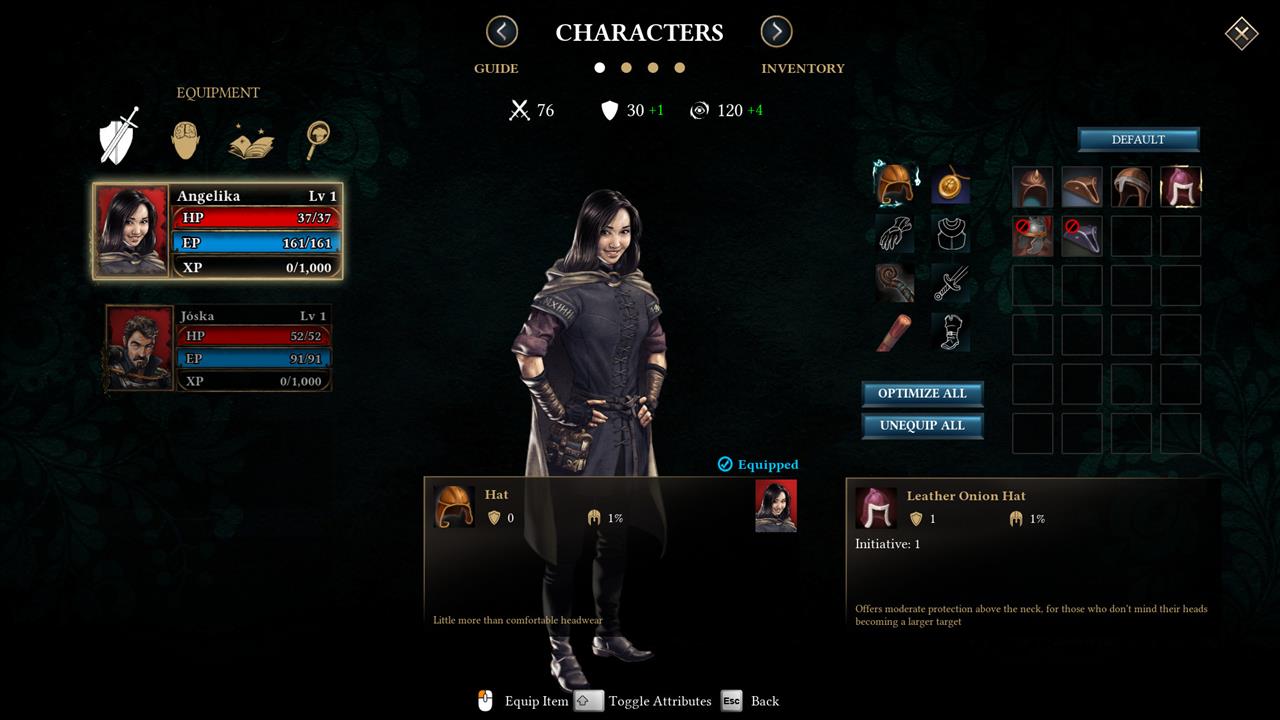 Skills and spells dip into the same pool of mana/energy, which must be carefully managed. Enemies can sometimes transform mid-battle, shifting or becoming stronger. You don’t want to blow your entire mana pool on aggressive offense right out of the gate, and then be left with no power left to heal your dudes when one enemy absorbs another and becomes twice as strong.

Though some later levels start to feel a little grind-y, for the most part Operencia strikes a very sweet spot between its breezy tone and its deep combat. This is a game that arrived right at the correct moment in my life, delivering a light-hearted escape into a delightful new fantasy world right when I need it most.

Zen Studios, a developer that has eaten many hours of my life with their pinball games, proves here definitively that they are more than just “the pinball guys”. By stretching into a wildly different genre, they have shown that the depth and charm in their pinball games is no fluke, and they can deliver polish and quality across a number of fronts. I can’t wait to see what they do next.

Zen Studios new dungeon crawler takes the tropes of an oft neglected genre, and updates them with wit and style. Operencia: The Stolen Sun oozes charm, with the perfect balance of combat, exploration, puzzles, and funny bantering characters. This game is a complete winner, and any fan of dungeon crawlers shouldn’t hesitate to pick it up.