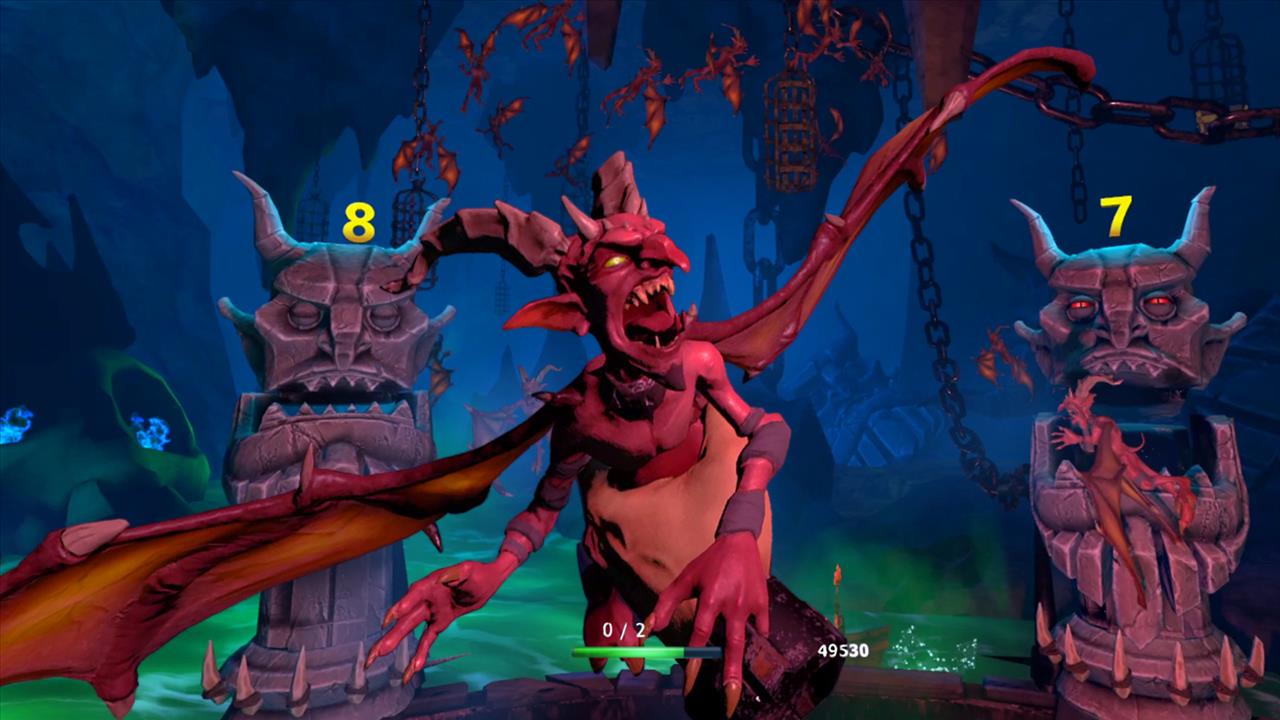 The concept behind Good Goliath is deceptively simple. The player character – a giant recently fallen from the sky – is mistaken for an evil invader. Having landed in a medieval town full of rather hostile and militaristic folk, the Goliath is immediately attacked on all sides. The town immediately militarizes, and before the giant knows what’s happening, he’s under attack. And under attack. And under attack some more. In fact, playing as the giant in Good Goliath, you had better get used to people hurling objects at you. Because it never stops, for the entirety of Good Goliath's brief playtime.

Ugly little townspeople begin swarming towards the giant (in waves, of course), chucking pitchforks at him. As the player, it is up to you to either dodge the incoming projectiles or catch them and throw them back at your attackers. 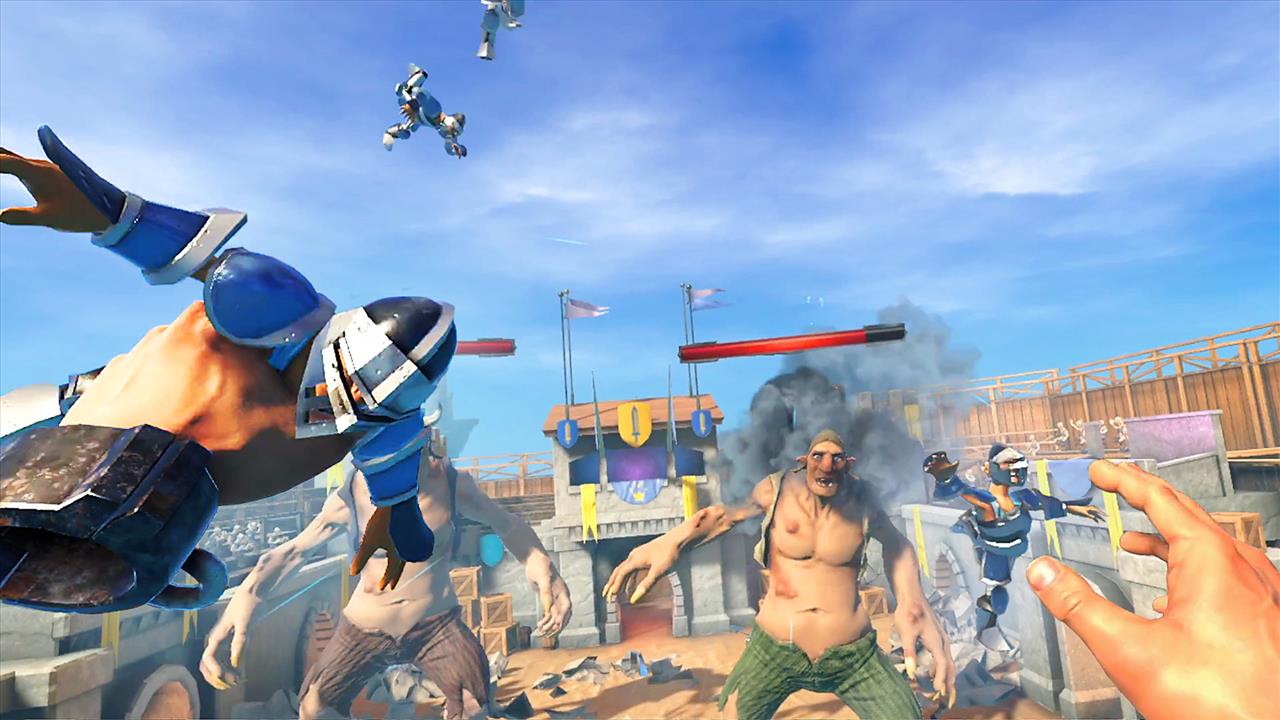 And that’s the primary mechanic at work in Good Goliath. Catch stuff, throw stuff back. Of course, a number of wrinkles are eventually added to this basic gameplay loop. New types of townspeople show up; some with exploding barrels, which allow you to take out small groups. There are other targets besides the townspeople, and when you find yourself with a spare moment, it is fun to throw things at the environment to see if you can discover any secrets. And of course, the little town is just the first of nine levels, each of which has its own unique characters and flavor. It seems that there are a lot of settlements that want their turn throwing junk at the giant. It’s like the new national pastime.

The level changes give Good Goliath a chance to show off some pretty stellar art and design work. The angry little characters are all very unique and fun, jabbering in their tiny language, and the environments look fantastic. One of my favorite things about PS VR is the way the platform allows for a sense of scale, and the idea to make the primary character a giant was particularly inspired. Each of the little dioramas is very nicely detailed, and the music adds a lot of flavor to each level. 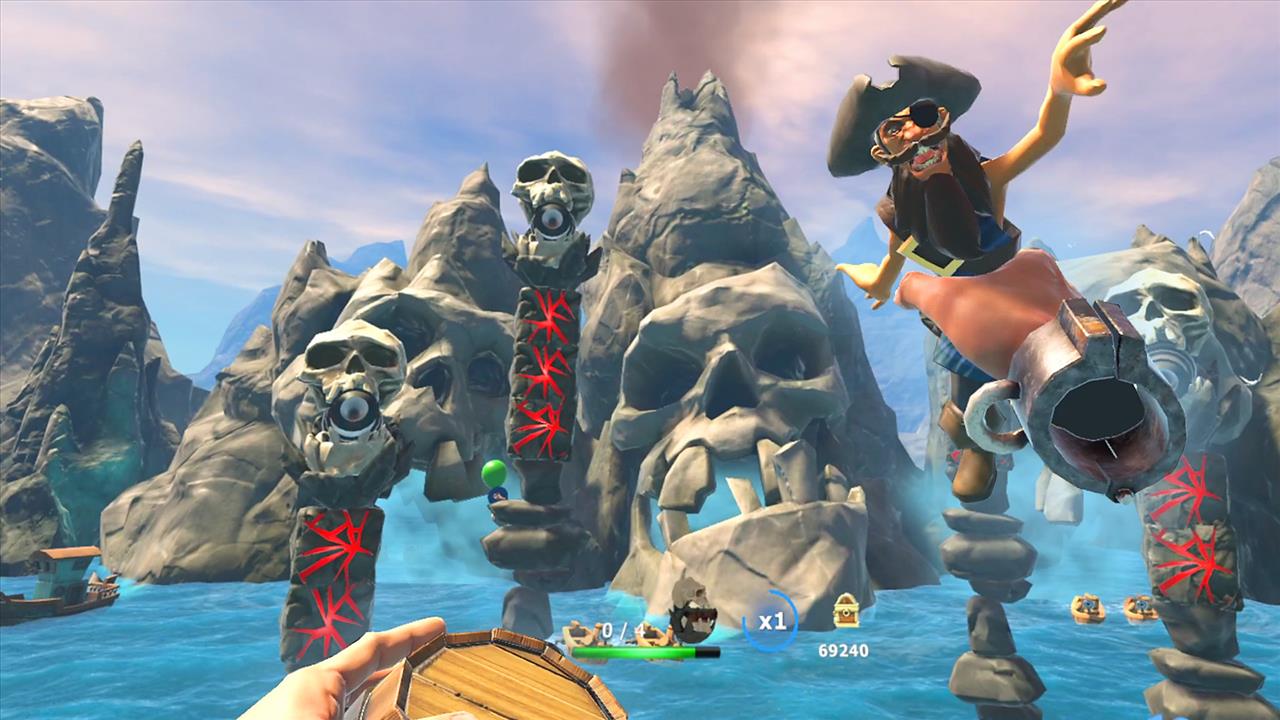 The levels consist of maybe 10 waves of attackers, who run out together and attack. Each wave is slightly more difficult than the last, and at times, the attacks can be overwhelming. Good Goliath is no pushover. If you boot up Good Goliath, be ready to move around a fair bit.

Good Goliath is a game best played standing up. I attempted to play sitting down, and the dodging mechanic was extremely difficult to pull off while seated. Further, as the waves progress, attackers show up stationed off to the sides of your peripheral vision. It is much, much easier to handle these attackers when you can actually turn to throw things at them. But sitting or standing, these fools were still annoying. 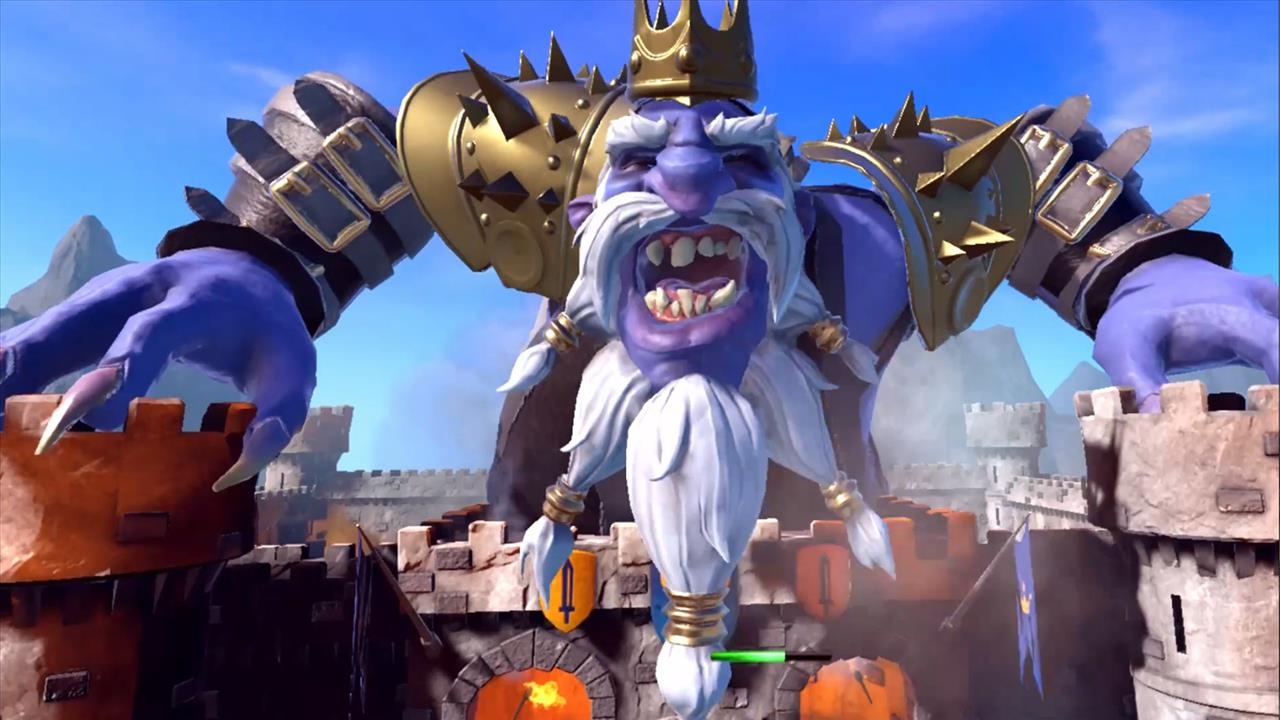 So yes, Good Goliath is a nicely designed little game with attractive visuals and good music. But is it any fun? If I am being honest, I really didn’t enjoy actually playing Good Goliath as much as I enjoyed experiencing it, if that makes sense. I liked the little houses and the little grimacing pirates, and of course I enjoyed throwing a shark at people – who doesn’t? But the act of actually having people throw stuff at me felt kind of invasive, and a game based around that mechanic triggered a mixture of annoyance and outright aggression in me. I just didn’t like these little turds chucking stuff at me. It made me unhappy.

So, I found myself catching primarily with my right hand, and throwing mostly with my left. I couldn’t get the hang of passing stuff from one hand to the other, so I was limited to whatever I caught in my left hand for my ammo supply. I kept trying to throw with my right hand but was ludicrously unsuccessful. I ended up trying to swat a lot of things out of the way, or just catching them and dropping them on the ground. I felt outnumbered and vaguely assaulted, which was not a pleasant experience.

Good Goliath is a good spirited arcade-style game that I just didn’t enjoy all that much. There are times where games just don’t click with me as a reviewer, although I can acknowledge that the games themselves are quality, well-made products. Good Goliath may just be one of those games.

There’s a reason that giants get mad and smash up little towns. Angry mobs throwing things at you makes you upset. Good Goliath turned me into something of an angry giant, and I’m not certain that’s a thing I want to be.

Good Goliath is a well-made arcade game that I just didn't enjoy all that much. The central mechanic of little dudes throwing things at you and you catch them and throw them back somehow made me feel angry and annoyed. Stellar artwork and design would not overcome some mechanical issues and, in the end, I was left feeling grumpy.