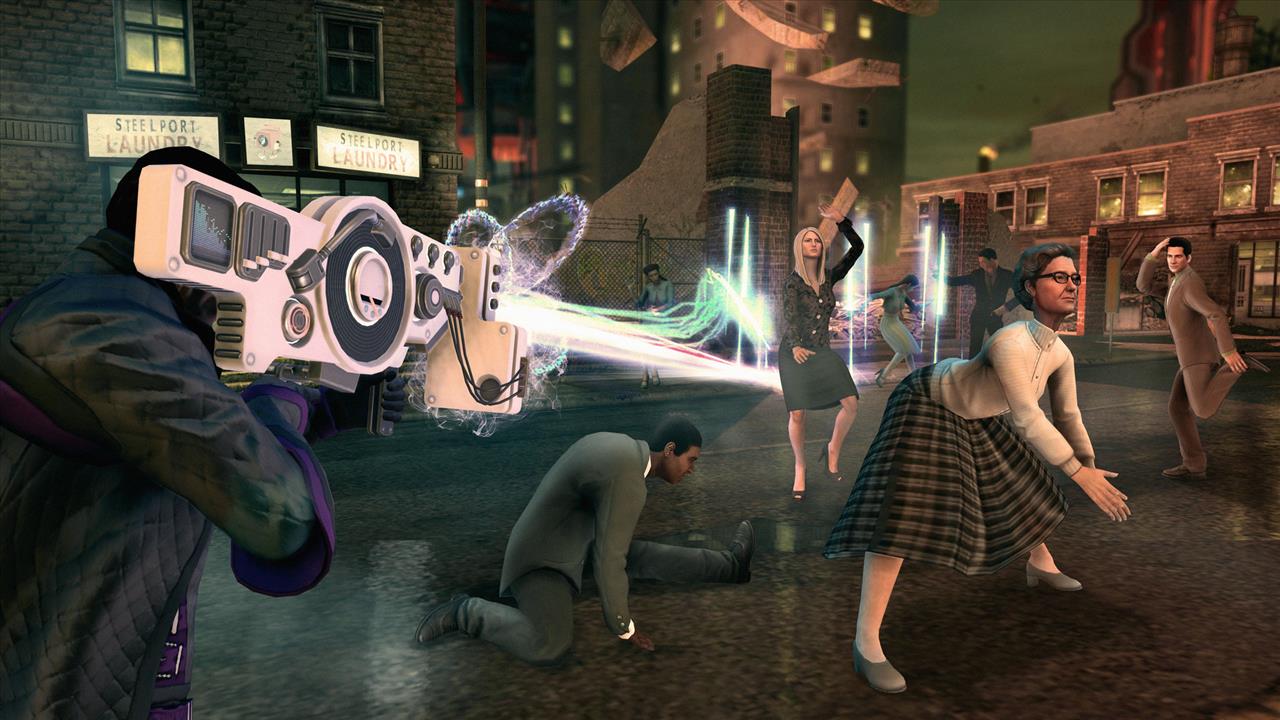 There is much I want to discuss in this review--much about the series history, what this game does different, even the criticisms. There is a madcap mixup of pieces that compose this game, but what I can't have is this central message getting lost in those details: the whole of this game comes together to be something more than its parts. There is an insane, and insanely gratifying, experience of sitting down to wreck mayhem in Saints Row IV: Re-Elected. Let's get this out of the way right now: if you're a fan of open world games of any flavor and want to just let go of your inhibitions, then you can't go wrong, or do much better, than what's on offer right here.

Saints Row hit the gaming scene back in 2006. It was obvious the underpinnings of the game was to be a Grand Theft Auto clone. But it was never merely some shallow cash grab to capitalize off GTA's success. From the beginning, the series paid homage to the budding genre and started pushing boundaries itself. The first game was widely praised upon release and rightly so. The sequel came along and refined the gameplay but only inched up the scope of the campaign. Saints Row: The Third hit the scene and really started expanding the borders, moving the location from the gang squabbles and turf wars of Stillwater, Michigan, in the first two and into the much larger metropolis of Steelport and introducing the Syndicate, an overarching crime organization with means and plans well beyond previous forays. Throughout this evolution, the series was introducing new concepts that others, even GTA, would later mimic--like GPS navigation and multiplayer. It also developed ones that GTA would never really embrace like more refined player movement and melee abilities with much more flourish. 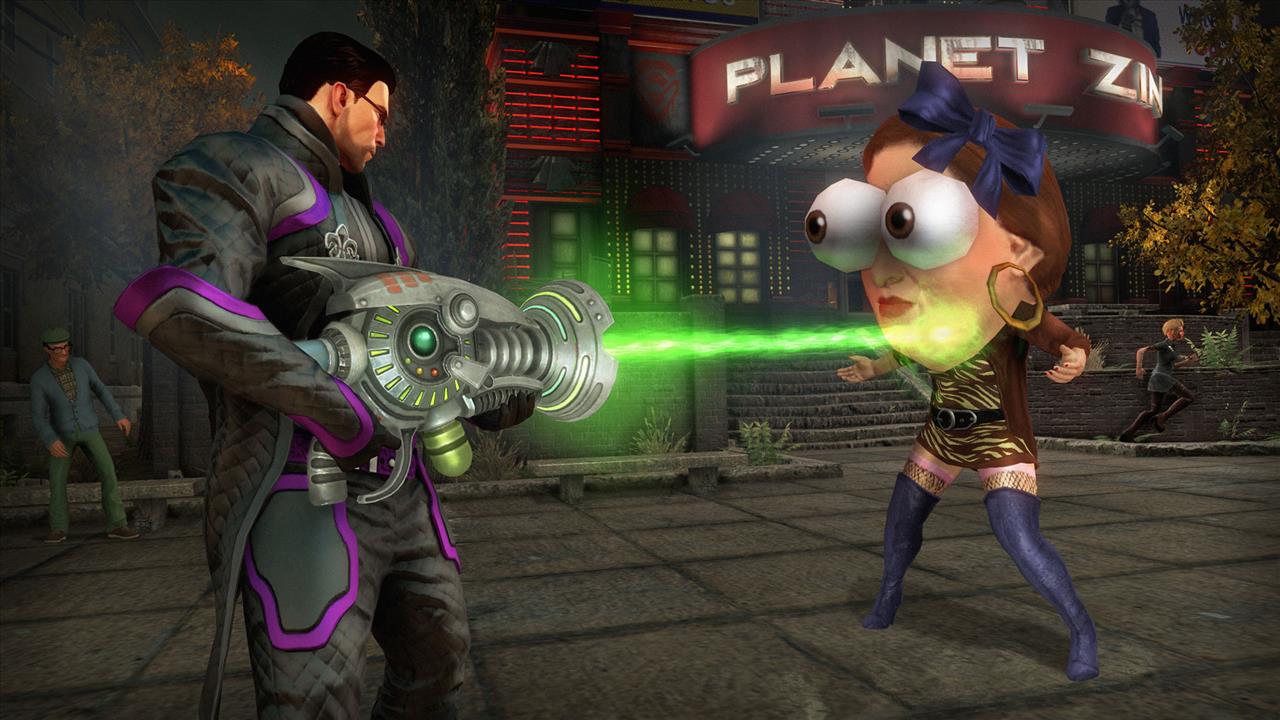 Finally, along came Saints Row IV and turned everything on its head. The cloning of GTA is now left in the dust, this game truly weaves together the open world of GTA with gameplay that meets somewhere in the middle of GTA and something closer to the Infamous series, a plot line stripped right out of The Matrix films, and all spiced up with elements from a series like Mass Effect and an over-the-top humor all its own. I defy anyone to try and pigeonhole this game into any known form, even a previous Saints Row title, because it is taking all these various elements and colliding them together in what might seem on print to be a gigantic confusing mess, but what actually comes out the other side as a rip-roaring good time.

Upon the first release, a console generation ago in 2013, reviews tended to be pretty tight lipped about these drastic changes in plot, gameplay, and pacing. Our own review on the Xbox 360 did so as much while also netting it a score of 8 of 10. We liked it then but didn't want to give away too much about the surprises it had in store. Well, it's now 6 1/2 years later and the cat's out of the bag. Even the Switch launch trailer pulls no punches. In this iteration of Saints Row, the Earth itself is left behind. Your main antagonist is an alien race, you will be launching attacks from space, and nothing is out of bounds. Wading through all this in the first hour or so of gameplay, none of it makes much sense. 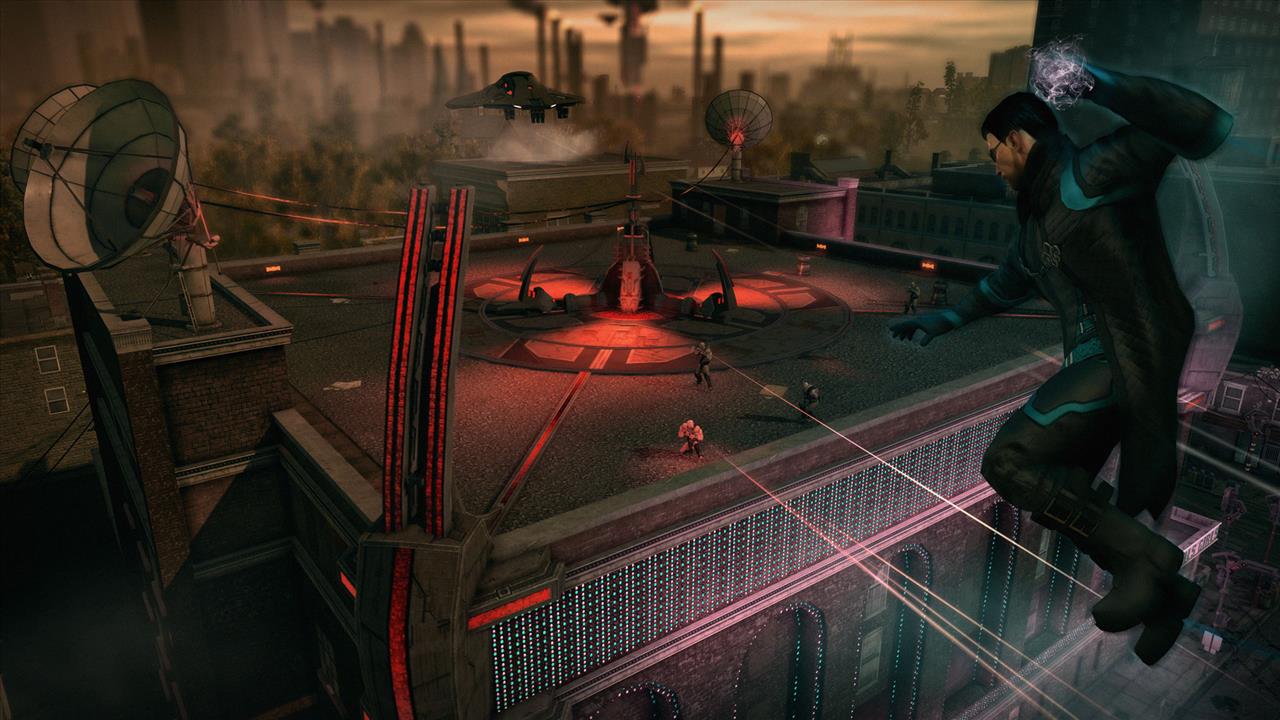 You begin the campaign on a mission that somewhat ties into the previous game as you are tracking down a Syndicate commander and briefly introduces you to some characters and combat. Mission complete, you non-sequitur right into the White House and fast forward five years into your character's run as President of the United States. How you actually got there, other than falling into the President's desk through a skylight, is completely glossed over. Then you leave the newly installed stripper poles in the Oval Office behind to attend a press briefing where the alien overlords fall from the sky, slaughtering or enslaving everyone around you. Next thing you know you are ambling down Main Street in a bad Leave It To Beaver rerun before the mayhem begins. Turns out your alien overlords have placed you in a simulation aping a 1950's nostalgia that never was. These first few missions are nearly entirely done on rails, there is no hint of open world play, nothing really makes sense nor it is particularly compelling, but bear with it, there's a payoff at the end. Freeing yourself from this simulation with the help of a duo of already escaped Saints sees you plopped out right into The Matrix plot line. Jacking back into The Matrix simulation to rescue the rest of your crew starts comprising the main plot line, while running side quests and romancing Saints already freed if you so choose. If it all sounds confusing and weird, it's because it absolutely is. Nothing really makes sense or pulls together until you get your first superpower, and then it all comes crashing together at once. All of the weirdness, all of this insanity, all of it is just a set up to give your carefully customized Saints boss the ability to run amok in an open world leaping tall buildings in a single bound and running faster than a locomotive. Oh and shooting freaking fireballs, that too.

It all comes together because it eschews the limitations of a GTA or previous Saints Row games or any of the open world games that must confine themselves even loosely to reality. In the simulation, everything becomes permissible. It comes together because you get the powers of an Infamous hero but also get to interact in a world with guns and cars in a way that is so much more immersive than that series ever wanted to focus on. It comes together because the zany comedy and ridiculous scenarios set the tone that this is not meant to be taken seriously, it is simply meant to be fun, and on that note it is pitch perfect and dialed up to 11. 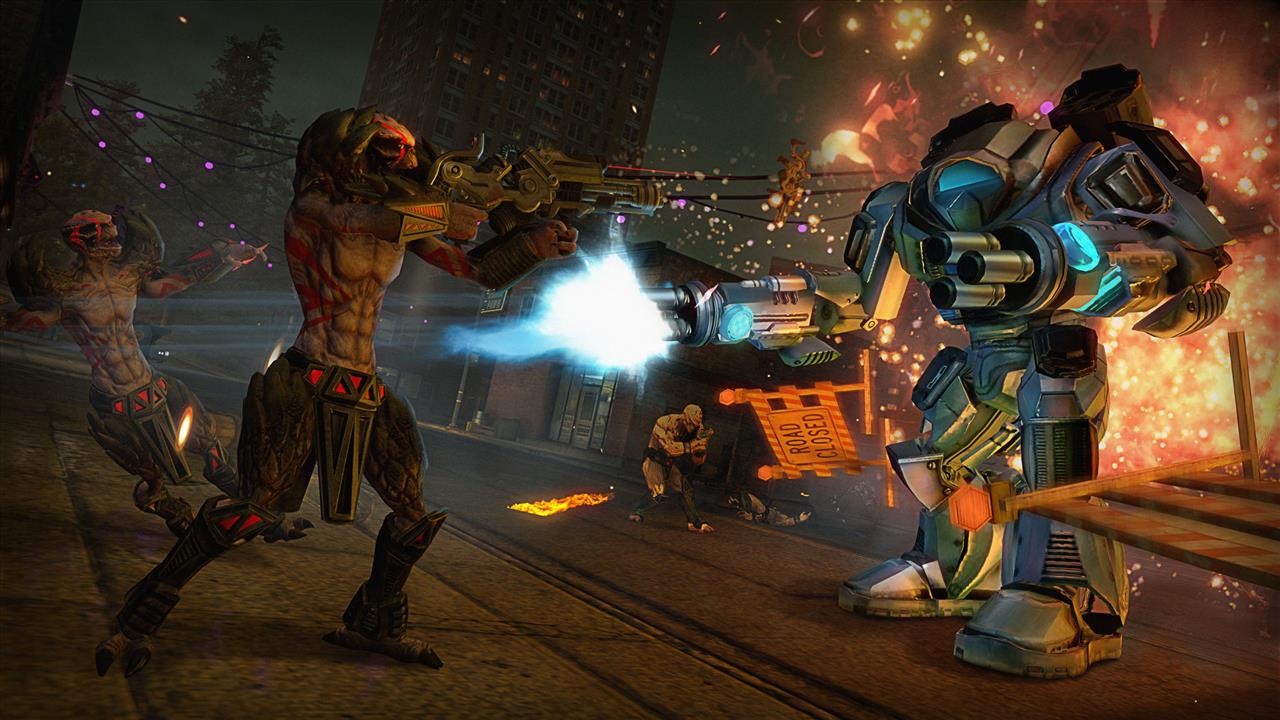 But it is also dialed up to 11 on a Switch, and this is where the platform's limitations don't so much get in the way but do make things a bit rough around the edges. The game runs smoothly for the most part. A little more so in handheld mode, a little less so when there is great destruction on screen when docked. The game world unfortunately tends to be a bit dark. It's nearly always night in this virtual Steelport sim which translates fine when docked on larger screen but can be difficult to really discern detail when docked. It's just not an ideal color and lighting palette for the medium. But frame rates are good enough and slowdown unnoticeable enough not to penalize the experience. The game does suffer, as most do, from the loss of tight thumbstick control that the Joy Cons just can't provide. Sensitivity and accuracy suffer greatly on the native controller hardware and can make combat much more difficult and frustrating than it should be. A Pro controller or even in a charging grip provide a much better experience. On the whole I found playing the game docked and using the Joy-Cons combined in a charging grip was the best way to go, but I think that's an important distinction. If you really want a handheld experience there are probably better games to recommend to that end.

This is not something new to my Switch experience. Some games, such as puzzlers, suffer nothing on the medium. Other, like Zelda, truly rise above. But there is a niche that really struggle, and previous reviews could not separate the struggle from the review, such as for a game like Sniper Elite. However, in Saints Row IV, this nuisance is actually fairly well mitigated by having a snap-to aim function available in the settings which helps a little and I encourage you to try and abuse a lot, but more so because unlike setting up a precise headshot from 300 yards away, the gameplay of Saints Row rarely requires such precision and patience. The Saints Row series has always been a little on the easier side and previously reviews for its various iterations would often lament this fact. On the Switch, however, it actually becomes a blessing by balancing out the difficulties presented by the sub-standard controller hardware. You are not going to find your greatest challenge on screen, rather in your hand, but the end result is mostly a wash. 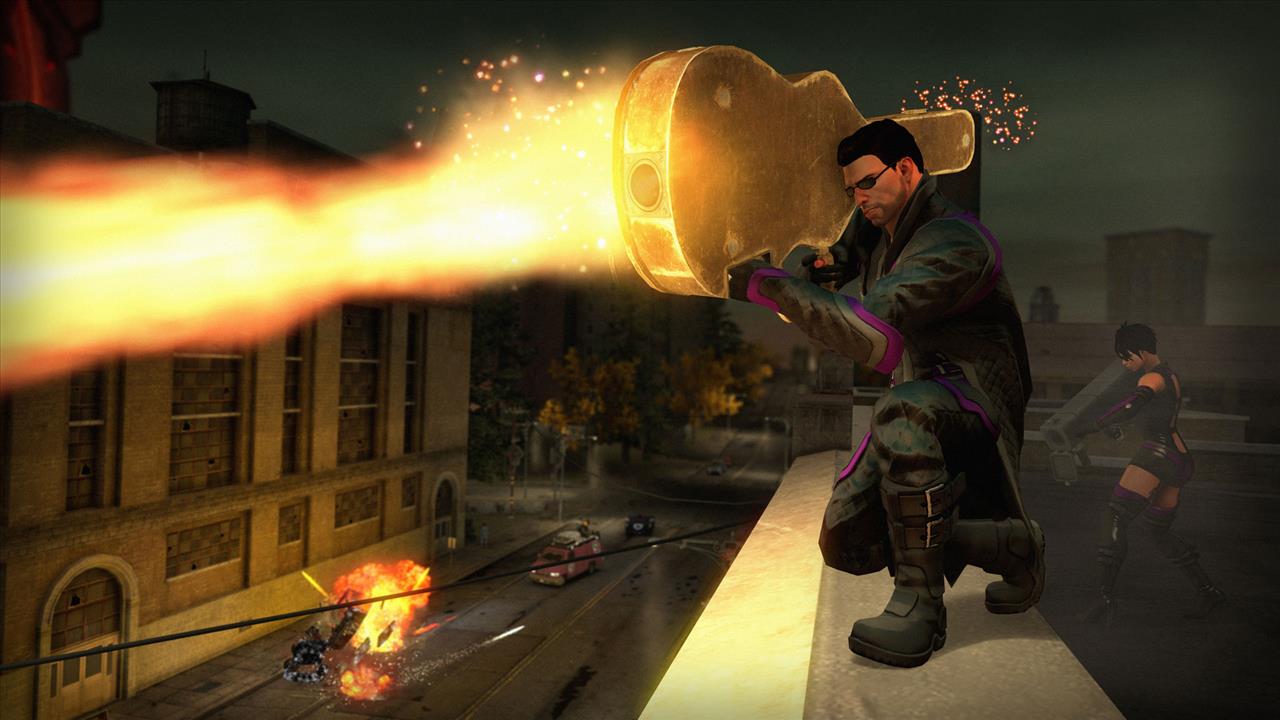 But once you are in it it is easy to lose sight of the limitations because the gameplay is just so satisfying and enjoyable. Once you get past that first hour and unlock the powers, there is an entire open world to explore, quests to run, collectibles to collect, customizations to experiment with, and upgrades to earn. The guns get bigger, the powers get stronger, and with each step there is a tutorial function that is uploaded in a sub-routine to properly walk you through the new abilities. Once learned comes mastery with bosses scattered throughout the quests to make sure you practice those new moves. The pacing is excellent, the new introductions reinforced, tutorials on point, and there is variety in all of the objectives: from car chases, to gun fights, to boss battles, to exploring the simulation with powers a little closer to Superman's than Neo's. There are also those unique missions and moments, fighting through a mission on Alien space 'shrooms, or dropping the quippy dialogue long enough to jump into a rendition of Haddaway's What is Love as you pilot a spaceship down the narrow winding trenches away from the core of an alien battle station so that you never lose sight that none of this is meant to be taken too seriously, only enjoyed. It takes the foundation of an open world crime spree game and on top of it builds a better Matrix game than you've ever played, with a better Crackdown game (sans environmental destruction) than that series was ever able to muster, all the while taking the piss out of Mass Effect and packing in more Easter eggs and references to film, games, and media that anything I can remember.

Even though we gave it a score of 8 over six years ago on its debut and on a previous console generation; I believe, despite the limitations of the Switch, this game deserves that score plus a little bump. It is a solid port, loses nothing in translation, and it now stands in an ecosystem uncrowded with similar games of this ilk.,however you want to define the mashed-up end product. Do not take this game too seriously, it obviously doesn't; but do come for the awesome, genre-bending power fantasy of rampaging through a cityscape with super powers.

It's rude, it's crude, and until Rockstar decides to port something better than LA Noire over or Sucker Punch stops being a Sony studio, it is the most fun you're going to have in an open world crime or mayhem type game on the Switch.