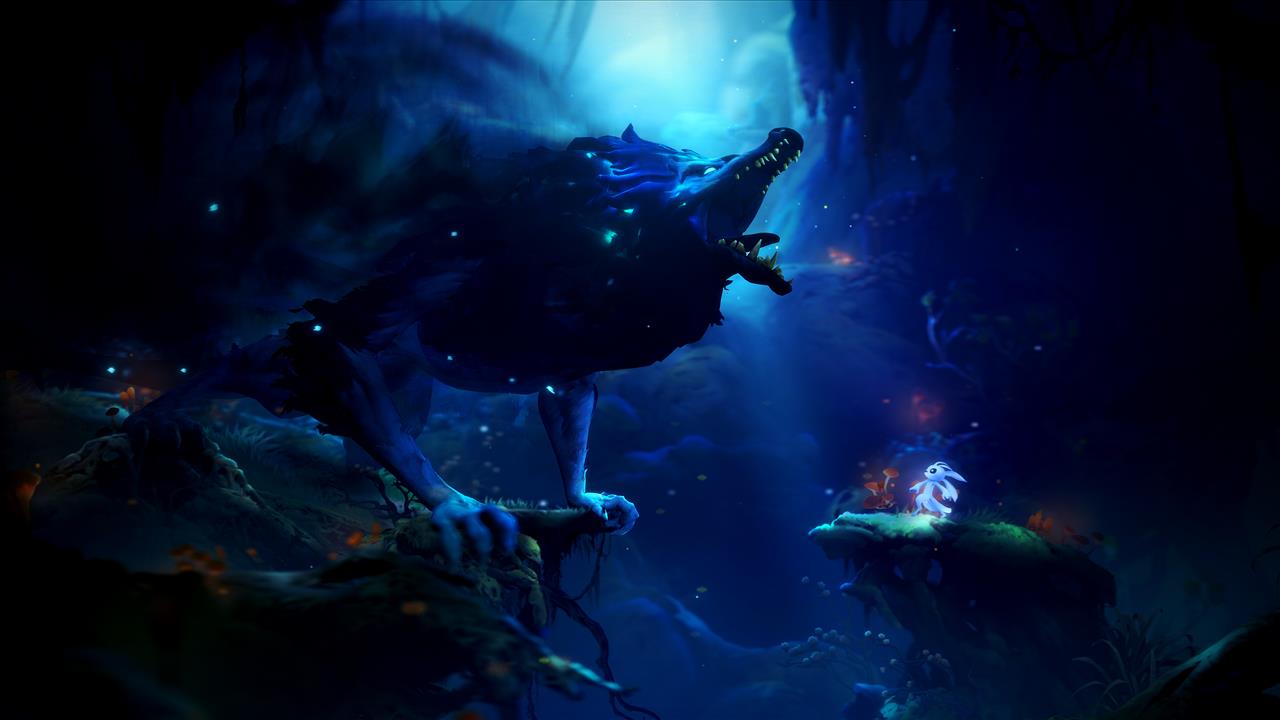 Ori and the Will of the Wisps

I...could be better, let’s say, at platforming. I was fully expecting to go into Ori and the Will of the Wisps and come out the other side having been driven out of my mind with just-missed jumps, pixel-perfect routes, and harsh consequences for missing a jump at the end of the level. I figured that the game’s beauty, obvious even from the start, would forestall that insanity by a little bit, but not enough to matter in the long run.

Yeah, it wasn’t a problem. Ori and the Will of the Wisps is gorgeous, and even during the more difficult sections of platforming—seriously, I don’t want to talk about how many times I died on tiny platforms and poles over poison water—I felt motivated and encouraged to keep going by the landscapes, fluid movements, and satisfying combat.

This game thrusts players into the twisting, intricate world of Niwen, after a storm separates Ori and the young owl Ku during their first flight together. Ori awakens in a dark, swampy landscape, and must navigate the nonlinear world in order to locate Ku and find their way back home. And what a world it is, y’all. The design is gorgeous; with enemies that look slightly different based on what part of the level they’re found in, dynamic lighting that changes depending on your altitude, and bioluminescence everywhere you look—which, by the way, is one of my favorite natural phenomena—the eye never gets bored. That’s to say nothing of the color variety, which is just perfect for the sort of natural, ethereal genre niche in which this game finds itself. 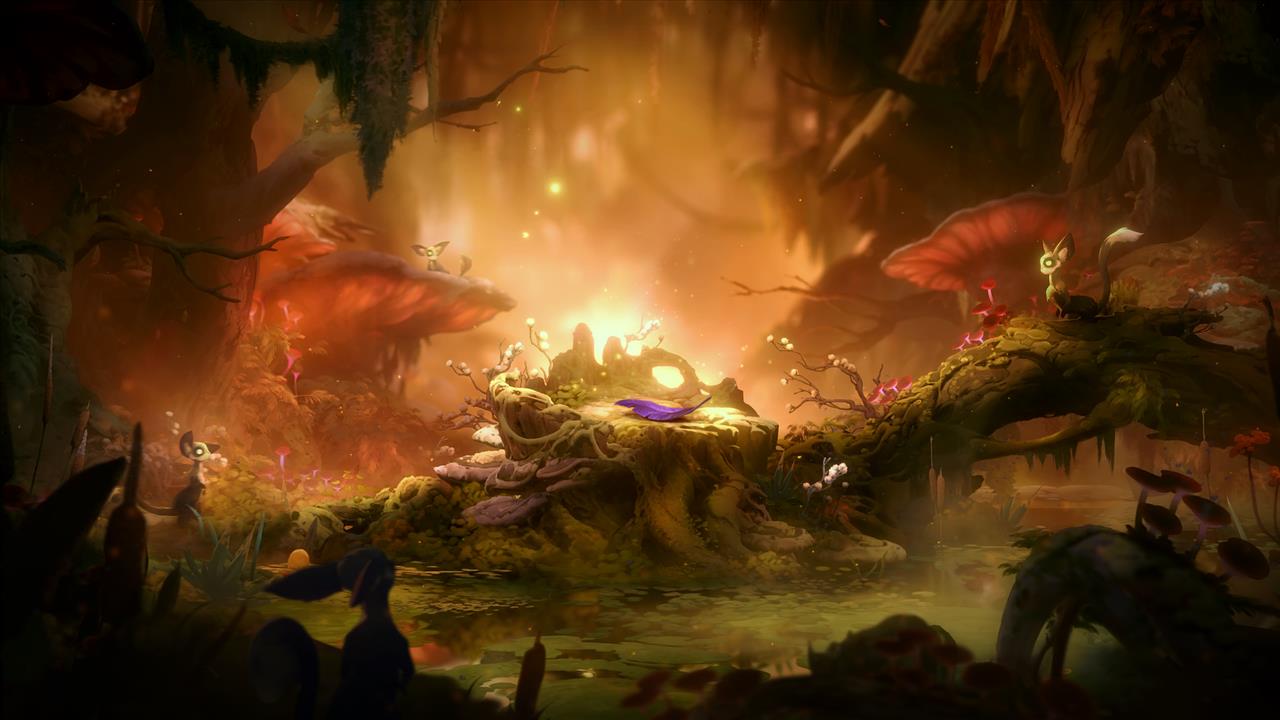 At first, Ori doesn’t really have many options for maneuverability, and though the most crucial of these thankfully become available at Ancestral Trees very soon in the game (I’m looking at you, double jump) it’s still a bit odd to get used to for the first small portion. And boy, do you need as many options for maneuverability as you can get, especially as you near late-game. More than once I found myself miss a jump by a pixel or two—and then promptly question whether it was because I sucked or because I didn’t have the necessary move yet—and plummet a depressingly long way, and then have to begin a long sequence of wall-scrambling and climbing. 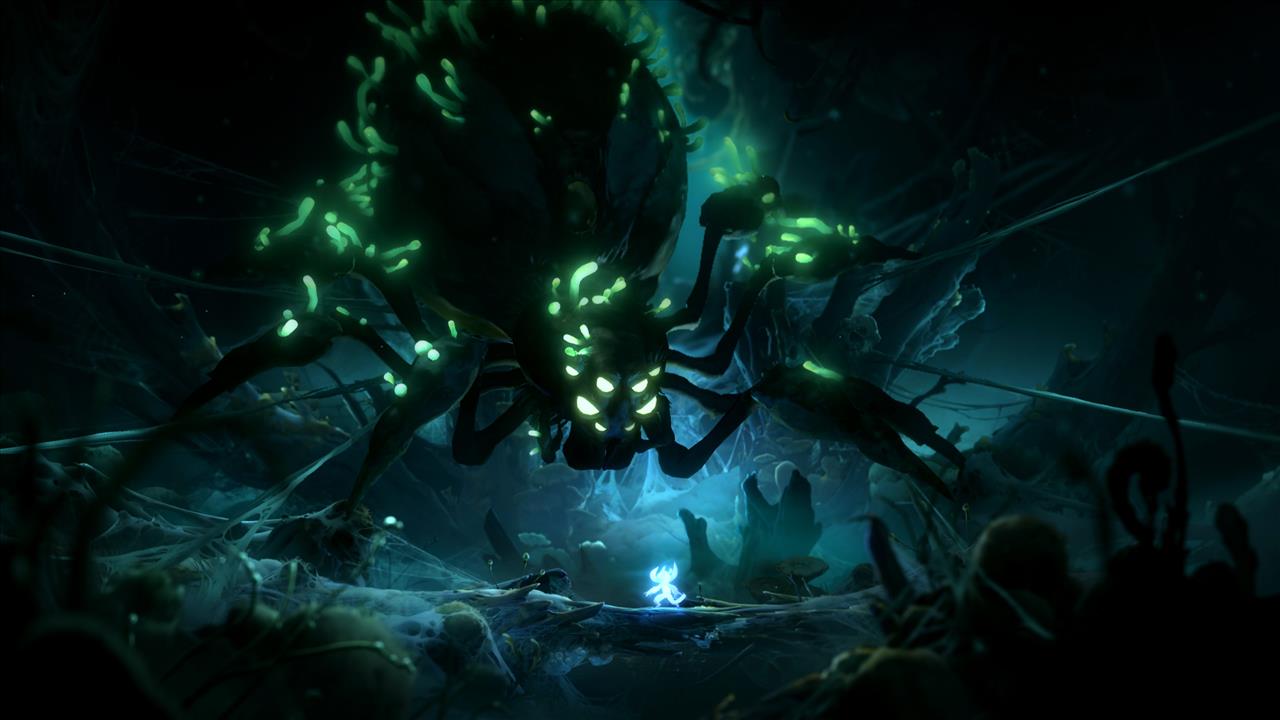 That being said, when you do get the hang of a particular ability or way to move Ori past obstacles, it’s incredibly satisfying. There’s nothing quite like realizing you’ve learned to perfectly time your wall jumps for maximum distance super early in the game, or panic-mashing buttons as you’re falling into a pit of spikes and accidentally double-jump-wall-jump-sword-thrust-whatever your way to safety before realizing, “Oh crap, did I just invent my own combo?” (And then practicing said combo, because you totally, absolutely, definitely remember what buttons you pressed and in what order.) Of course, there are plenty of those satisfying moments later in the game, where I realized that I truly obtained (relative) mastery over a particular move or combo, but having those more minor satisfactions so early in the game really went a long way in keeping me motivated to play. 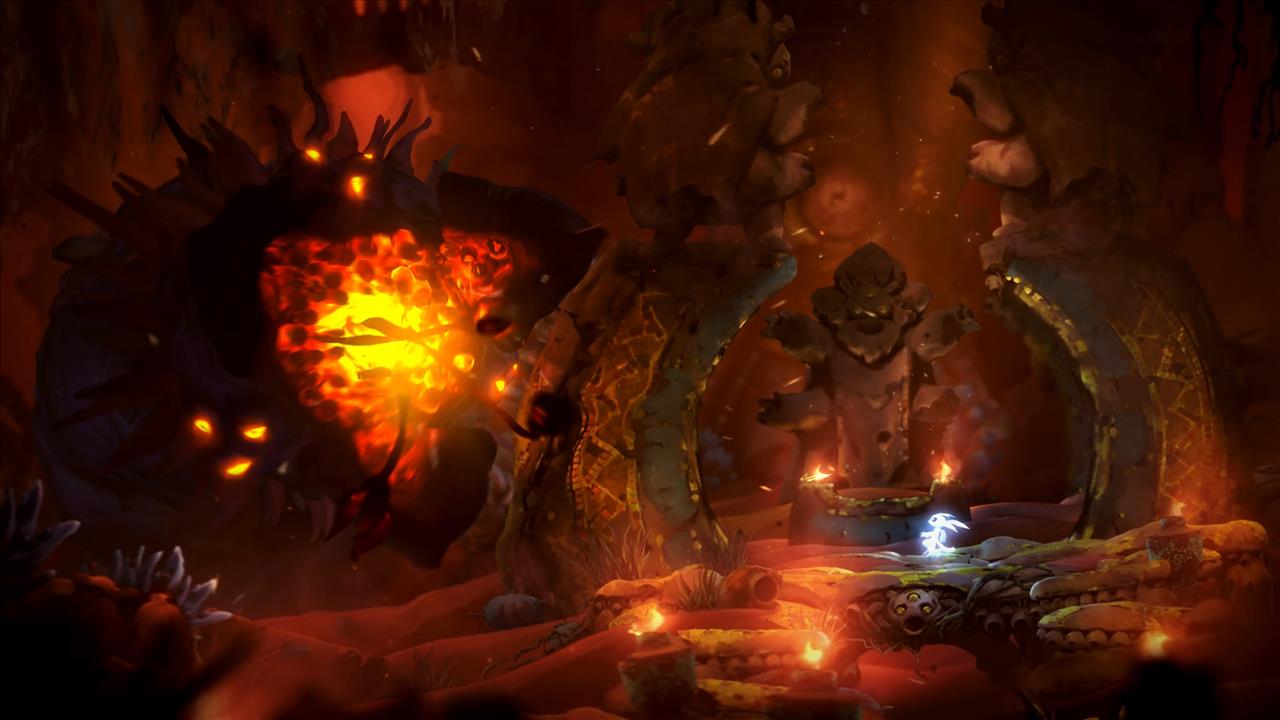 One of the beauties of this game is that there’s never nothing to find. Even if you find yourself falling down away from your intended route, or if you get lost in the twists and turns of the level, you’re very rarely going to be met with nothing. There’s always something hidden for you to discover, whether it’s an Ancestral Tree or a Spirit Shard or a Life Cell Fragment or any other assortment of things to aid you in your quest.

And trust me. If you play anything like how I play, there’s going to be a lot of straying from your intended route, and you’re going to find a lot of stuff. 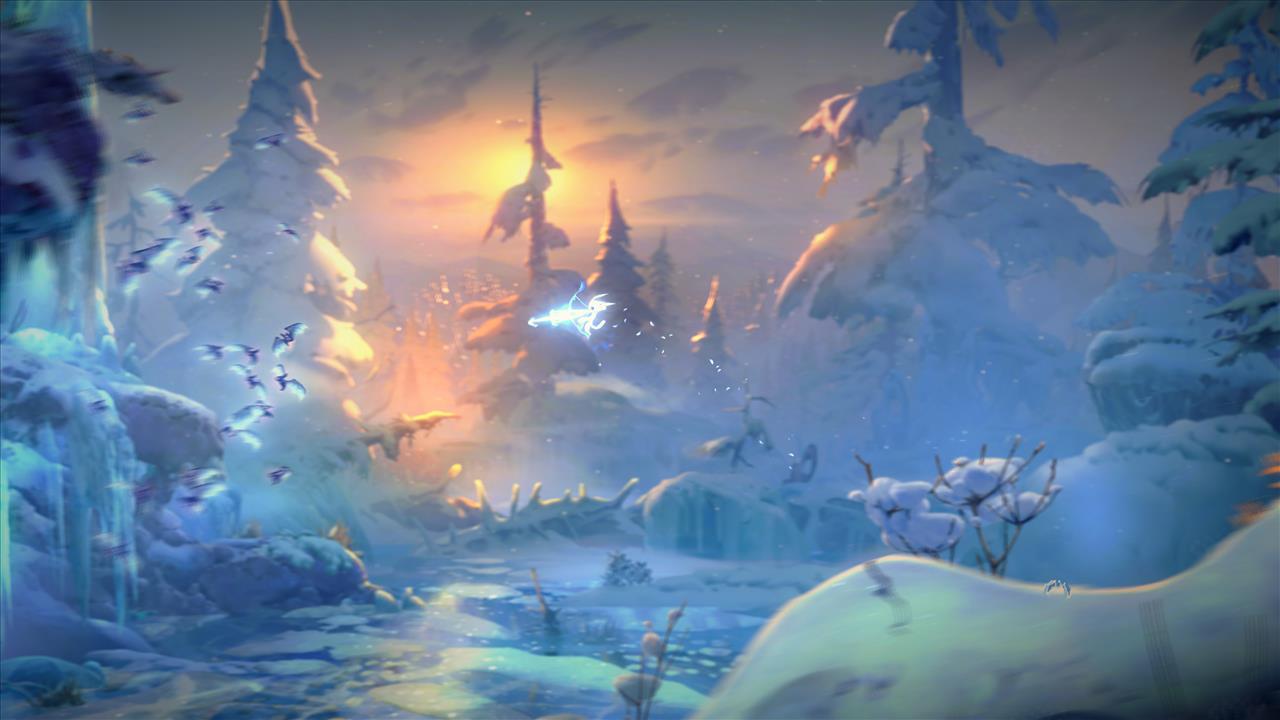 My general platforming failures notwithstanding, Ori and the Will of the Wisps is a very nonlinear game. If you don’t enjoy backtracking and exploring, and prefer maps with a clear start and finish as opposed to something more labyrinthine, then you might have a tough time getting into this game, because—just to provide an example—within the first half hour of gameplay I’d already crossed a particular junction three or four times. How many of those times were due to me falling, I’ll leave a mystery, but that’s neither here nor there. A lot of items and abilities are visible in the early game, but unobtainable until you learn particular abilities later on—and which ability is needed, it’s up to you to remember. Or you just stumble back over it during some of the aforementioned backtracking and go, “Oh, yeah, right, I remember this. I wonder if I can get to it now—oh cool, I can!” Of course, this is a totally valid style of game, and it’s something that many players thrive on; it’s just something to bear in mind before you dive in. 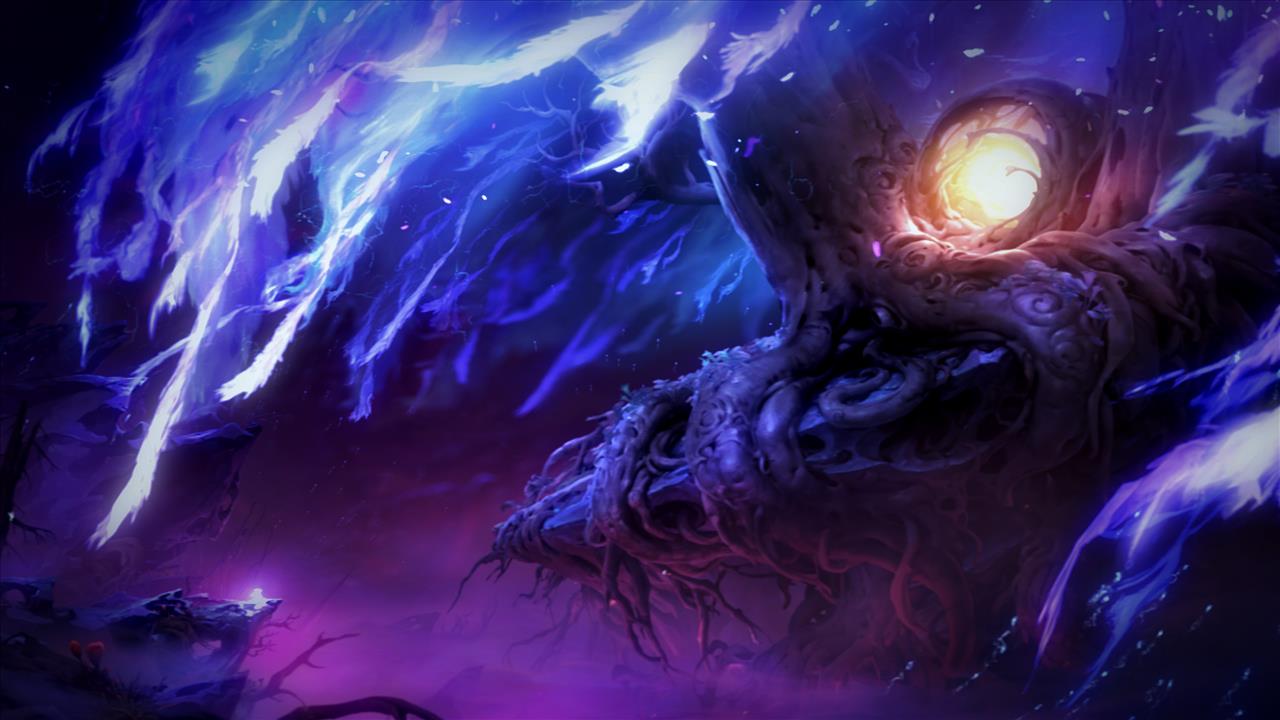 In this backtracking, you’re bound to run across respawned enemies, or, at the very least, enemies that hadn’t spawned last time you were in a particular area because you didn’t have a particular combat skill. Flashback to me climbing up toward the start of Inkwater Marsh at the very beginning of the game, thinking that I wouldn’t be faced with a tough enemy because it was a starting area, and then being lunged at by an extremely fast enemy who most definitely was not there earlier. This is fine, once you actually gain a real combat ability (at the first Ancestral Tree) and are no longer dependent on a torch you can’t regain once the game takes it from you. But as soon as I found Spirit Edge, which is basically a super cool light sword ability, I felt unstoppable. The combat was so fluid and satisfying, just like Ori’s own movement and platforming, and gave me a pretty awesome light show whenever I landed a hit. The attack animation changes directionally—and that downward stab? Chef’s kiss. Perfect. Showstopping. Not to mention the fact that you don’t have to spend six years aiming a projectile in a sidescrolling environment, which is something I’ve always struggled with in games. Unlike other video game protagonists, Ori is actually smart enough to realize that, when you fire a projectile, you’re trying to hit an enemy—rather than that one rock off to the left who really didn’t do anything to you at all. 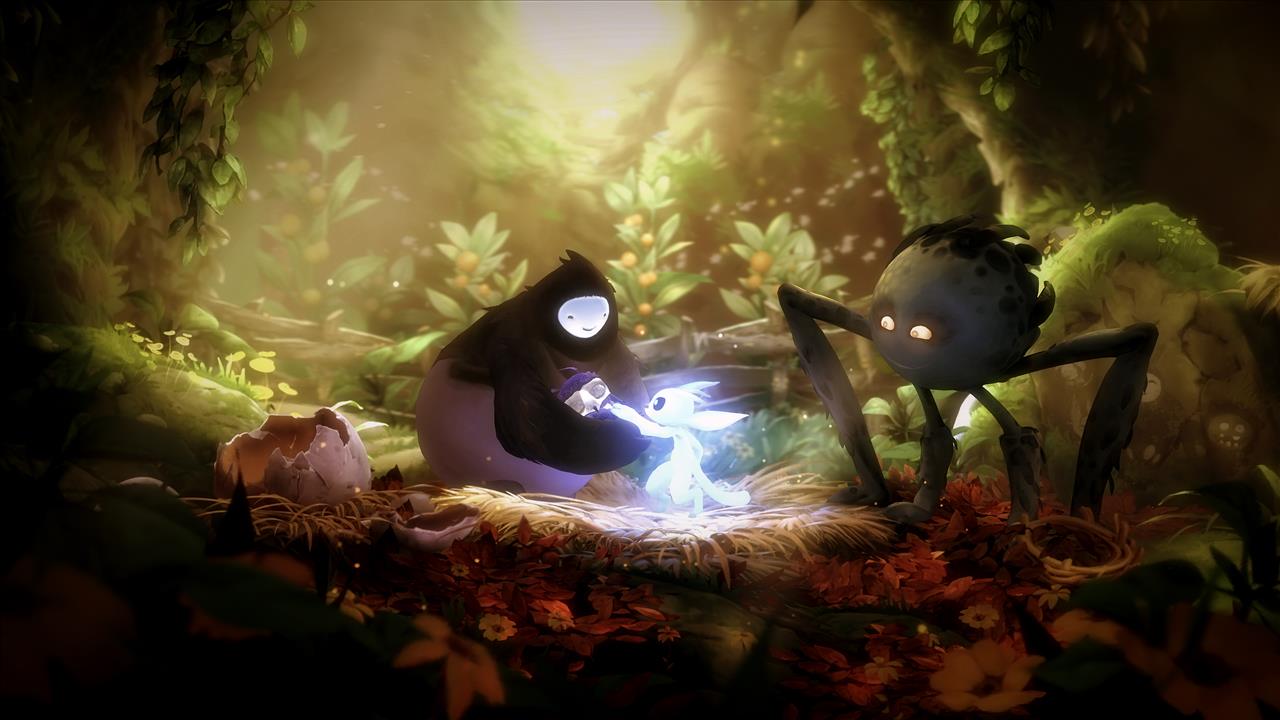 Despite my overall excellent experience with this game, I did encounter a couple of technical issues, all of which I attribute to this game being so new, and all of which I expect will be fully fixed as the devs roll out updates and bug fixes as usual. The more persistent one was pretty minor—just a bit of lag—where the game wouldn’t register my button pushes until a half second to a second later, which doesn’t seem like much until you’re faced with an enemy that really, really likes lunging at you in a blur of speed. The more obvious one, though, was right at the point when Shriek is first seen swooping overhead; when I first got to this point, I heard a piercingly shrill shriek, and then my screen zoomed in for a split second before going black—but since the ambient noise kept playing in the background, I thought for an embarrassingly long time that it was an intended cutscene with a long load time, until my Xbox finally gave out and kicked me to the home screen. Upon rebooting, I was able to progress through that portion of dialogue without incident, but man, was that a wild minute or two. 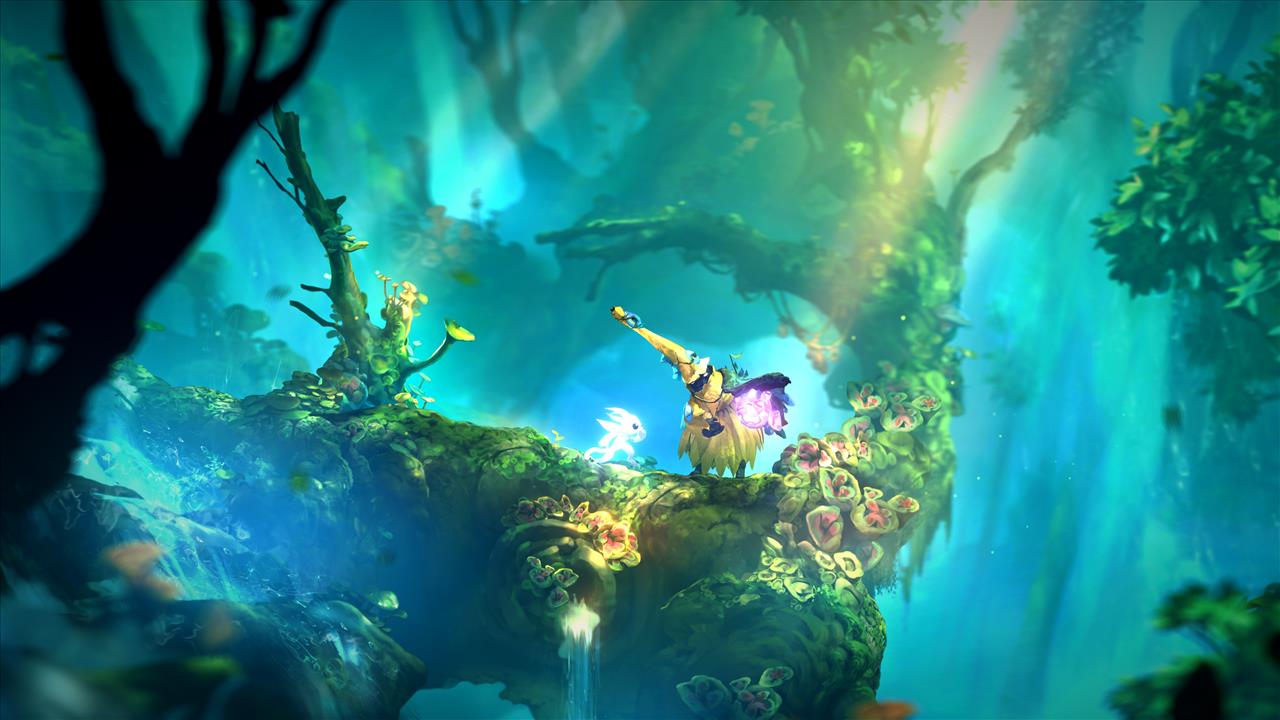 Overall, this is a satisfying, beautiful, and moving game, and the critical acclaim it has been receiving is well deserved. It will be frustrating at times. You will die a lot—sometimes for very stupid reasons. But Ori is forgiving (and thankfully, so are the reload times) and will ultimately make your time in Niwen worth it.

To no one's surprise, Ori and the Will of the Wisps is visually and audibly beautiful. Once you get the hang of Ori's abilities, the platforming is fluid and satisfying, the combat is cool, and the game rewards your exploration even when said exploration is a result of getting lost. Through it all lingers a feeling of accomplishment that makes it so easy to keep playing, even through the frustrating parts.