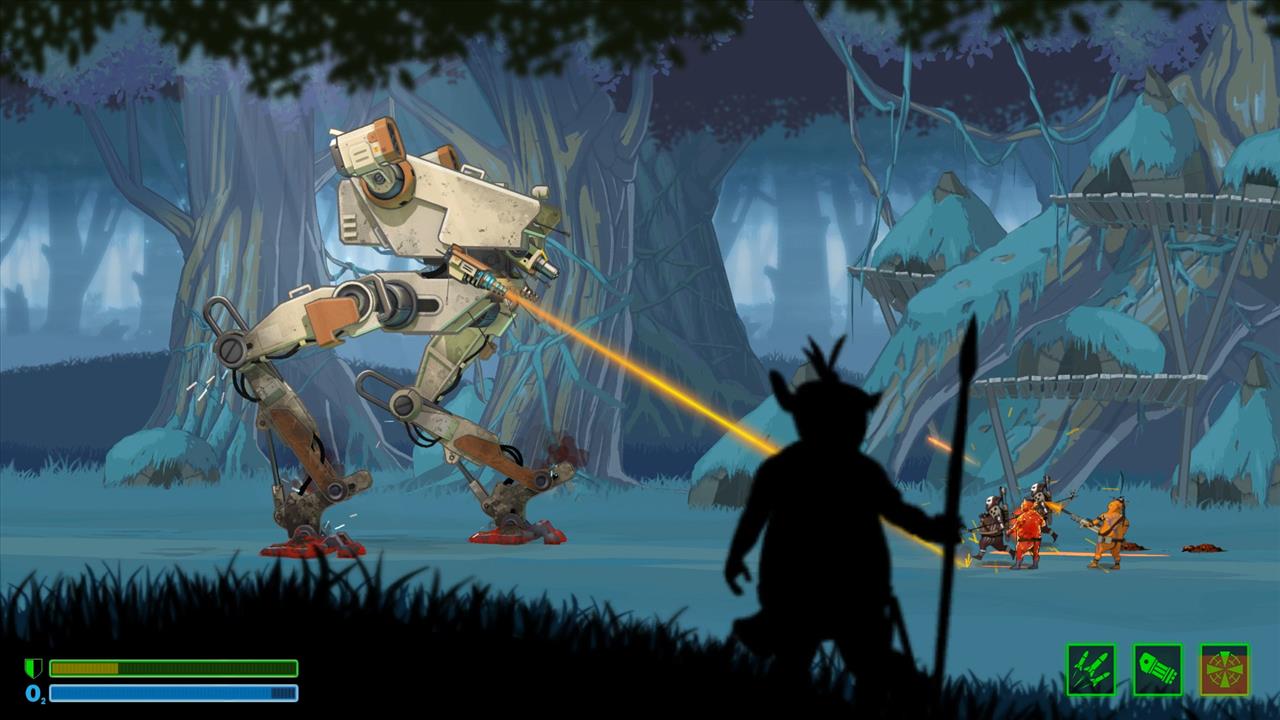 Indeed, I came very close to completely bailing on BE-A Walker, slamming down my Switch in anger several nights in a row and decreeing the game unplayable. I honestly began to think that perhaps BE-A Walker was some sort of elaborate hoax, a product designed to troll hardcore gamers and provoke online videos of streamers swearing endlessly at their audiences. I truly thought that there was no way to beat the opening level. 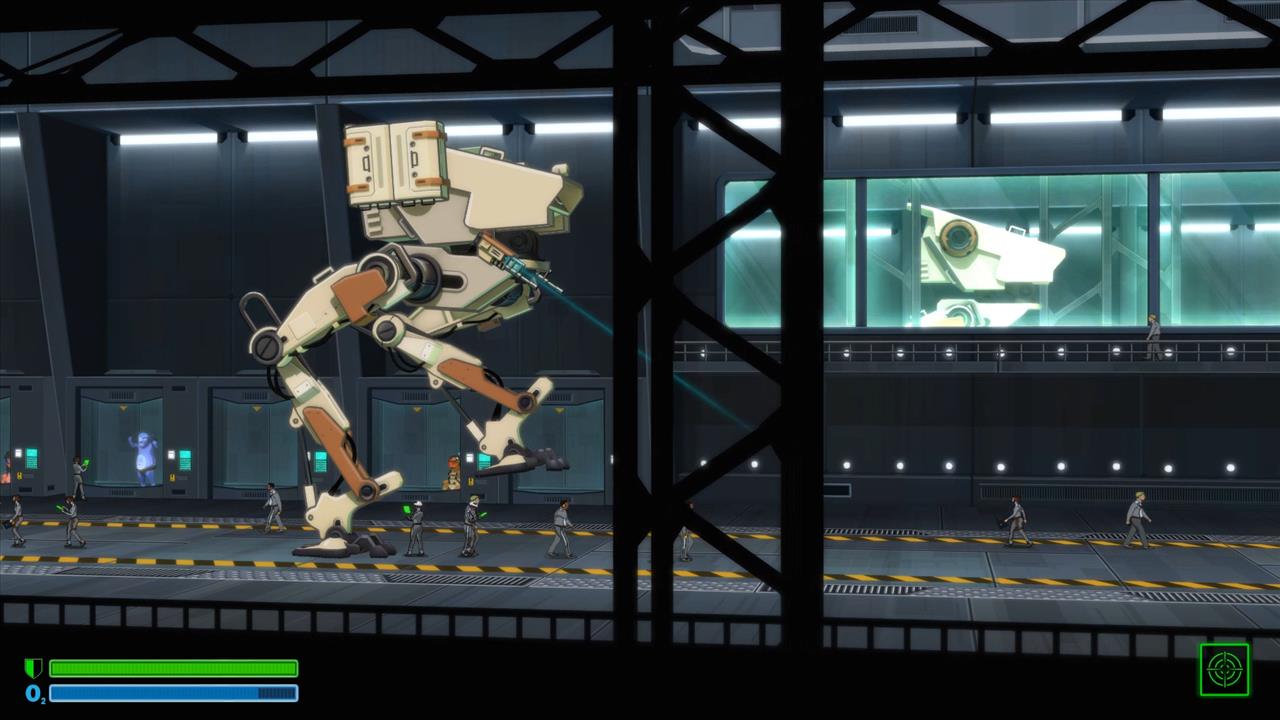 But no, once you suffer through that endless gauntlet (it took me at least 10 tries), there is an actually game hiding under there—occasionally enjoyable, but never friendly.

BE-A Walker puts the player in control of an AT-ST style walker, deployed to a hostile planet filled with unbreathable air and an angry indigenous population. Yes, the visuals look pretty Star Wars-y, but the storyline hews closer to that of Avatar. The line between the good guys and the bad guys gets pretty blurry, which is an interesting turn in a game that is primarily all about walking from left to right, stomping on little Ewok-looking dudes and shooting them with your woefully twitchy and unreliable weapons.

Each level (they typically take between two and five minutes) sends the player on a mission under different pretenses, but the bottom line is always the same: squash or shoot any enemy that gets in your way. That is easier said than done. For such a simple-looking game, BE-A Walker gives the player a lot to keep track of. 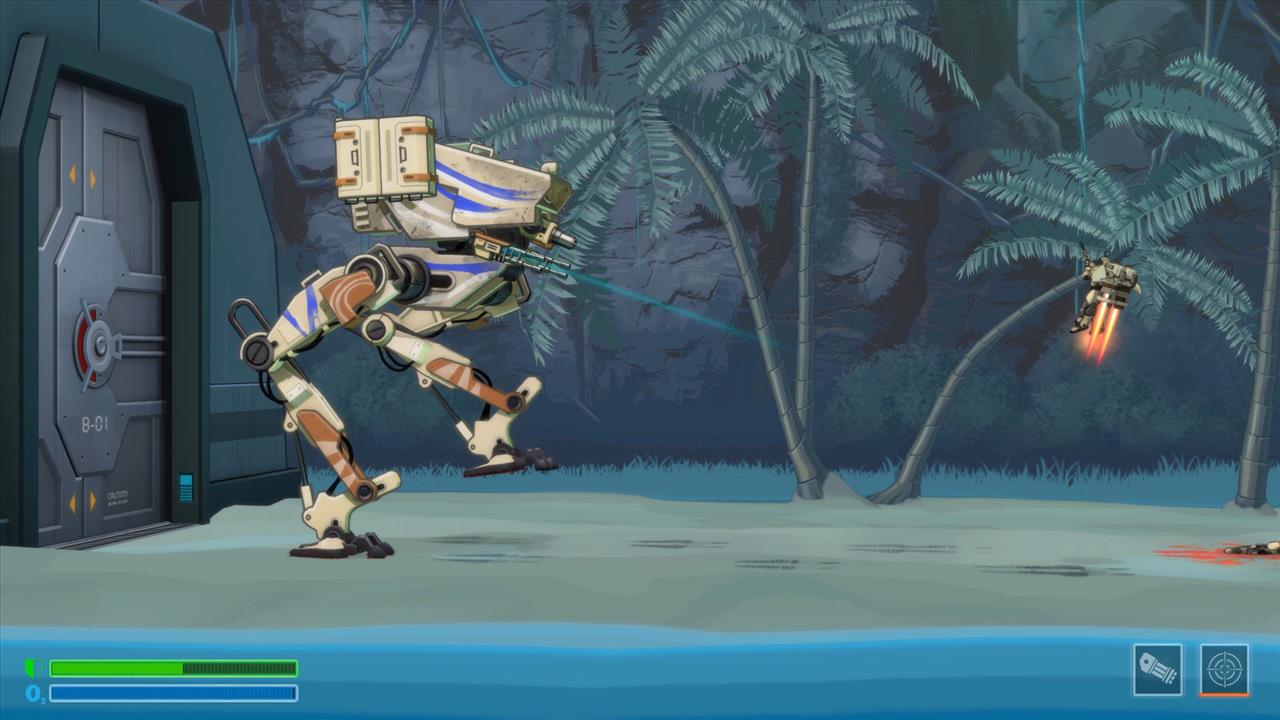 Two meters at the top of the screen track armor and oxygen. Armor is lost while your walker is actively under attack, but the oxygen meter is always ticking down. Run out of air halfway through a level and its game over. This adds a bit of strategic planning to the proceedings, but is also incredibly frustrating early in the game before you can afford to upgrade your oxygen scrubbers.

Another source of rising blood pressure are the weapon cooldown systems, which are stringent enough to be crippling. Fire just a few shots, and your weapons overheat—resulting in a brutally long cooldown period where the player is forced to either retreat (better watch that oxygen!) or wander back and forth stomping on enemies while taking damage.

Speaking of damage, any damage taken must be repaired in between missions, subtracting from your paltry earnings for each mission. Mitigating damage is a must if you ever hope to upgrade your walker, which, at times, is next to impossible.

Enemies come in swarms from the front, from behind, and dropping out of trees to clang away on the roof of your walker. Hang gliders drop bombs from above. Guys on the ground fire arrows and exploding projectiles. Every now and then some lunatic runs at you with a bomb strapped to their body. It can be a lot.

After some experimentation, I found that the best approach is to stop moving and carefully gauge each precious shot, taking it slow and managing the heat of my weapon carefully. Stomping on the guys behind you is the only way to take them out, so I typically tried to clean those guys up before tackling the dudes in front of me, as left unchecked they will pick away at your armor and cause hissing oxygen leaks. 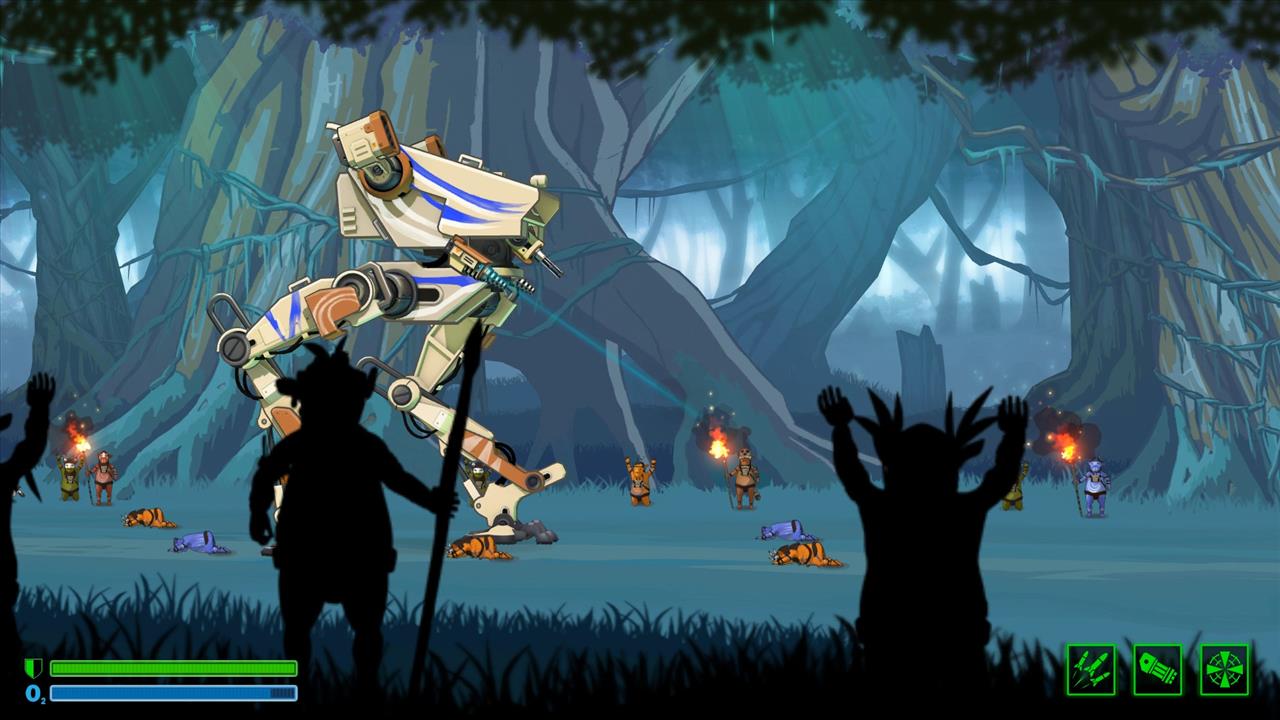 The visuals in BE-A Walker are fine for the sort of game it is, crisp and appealing. The walker is nicely drawn and animated, and as the game moves forward you eventually unlock different painted skins to change things up a bit. Enemies are tiny and undetailed, but that’s the point. It would be less fun to stomp them if they actually felt like people. They have sufficient individuality to be able to tell the different enemy types apart, but beyond that they are just gun fodder.

Godzilla-stomping on dudes is pleasing. They splat into little red puddles, with goo trailing from your foot as you move forward. And blowing them up with weapons is fun, for as long as your weapons last. The problem is, I wanted to rain down hell on these hapless clowns, but with the limitations place on weapons I was only able to rain down maybe 1/3 hell before having to back off. Yes, that dynamic forces a bit of strategy, but when I really wanted to bathe in the blood of my enemies, I ended up turning tail with arrows plinking off my armor.

The controls on BE-A Walker are a bit of a mixed bag. The game teaches you at the start how to lift first one leg and then the other, stumbling across the landscape like a newly reborn Frankenstein. But then BE-A Walker immediately offers an automated way to do the same thing, leaving you with little to no reason to go with the other, more difficult control scheme (other than to shake dudes off your roof—and one amusingly frustrating mission that has you walking through a warehouse trying not to squash the oblivious workers milling around your feet).

Weapons controls also feel a bit half-baked. Aiming is accomplished with the right stick, while the right trigger and bumper buttons fire your primary and special weapons. The aiming is very twitchy and demands precision, which is why I stop to shoot—aim for their feet! At times my right thumb would shake ever so slightly when firing my special, causing the precious shot to go spiraling off screen uselessly. Maybe my fault, maybe the game’s, but either way it made me curse every time.

BE-A Walker is a tough game that does little to accommodate players. Some players might really dig this; I did not. Almost every session I had with BE-A Walker ended with me slamming down my Switch in anger and spewing bad words at anybody in the vicinity. Yes, there is some fun to be had with BE-A Walker even for softies like me, but be warned: when the difficulty spikes, it spikes hard.

BE-A-Walker is the first game I can recall that opens with a difficulty spike. The message is clear: get onboard with the game's many anxiety-inducing mechanics or get out now. Beyond that, you will find a moderately entertaining AT-ST simulator. Be ready to juggle a variety of frustrating systems, as nothing in this game comes easy.