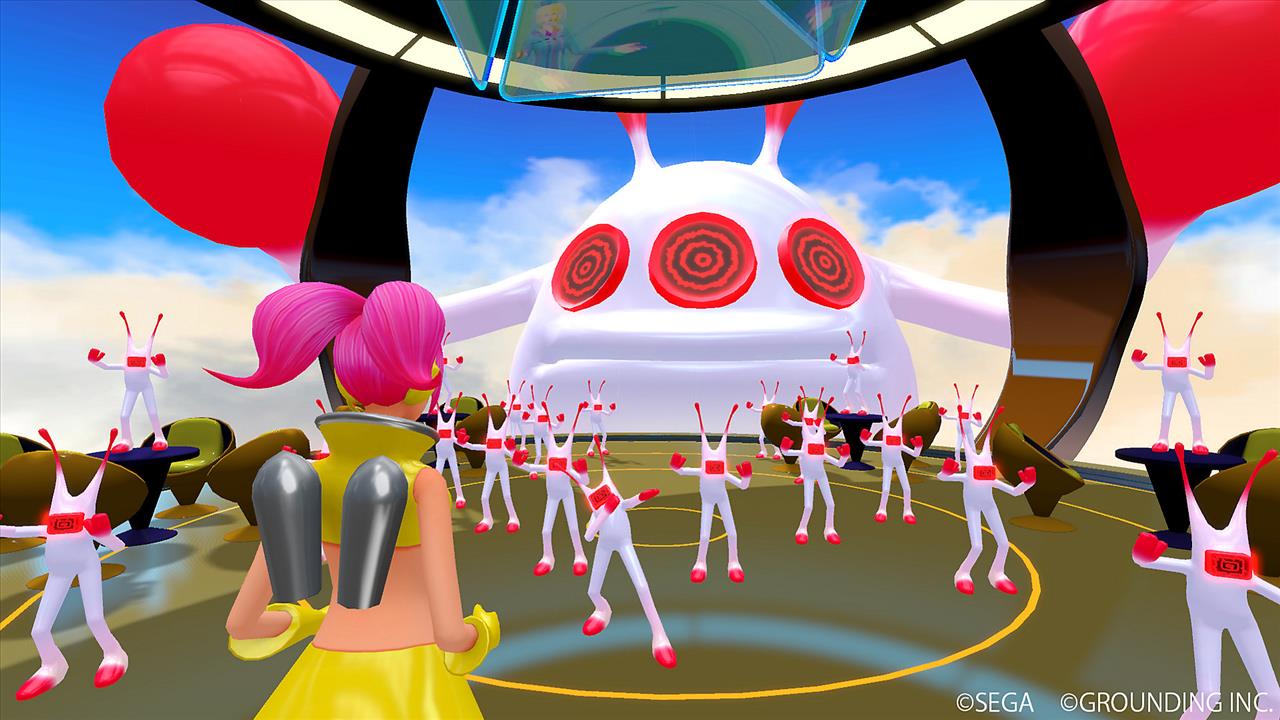 It’s time for some paradoxical real talk. Space Channel 5 VR: Kinda Funky News Flash! is the most enjoyable game that I would refuse to recommend. I loved every minute with this game. But with a campaign that stretches over an entire 27 minutes (if you play straight through and don’t die) and a price point of $39.99, there is no way that I could suggest that you buy it, no matter how much I loved it. I did the math for you. Space Channel 5 VR will cost you $1.48 a minute. I wouldn’t pay that much for…well…anything, really.

But setting aside the ludicrously inappropriate price point, would I recommend Space Channel 5 VR? Yes, in a heartbeat. This is a game the revels in its own style and insanity. I had an absolute blast playing through this tiny, four-song campaign. Space Channel 5 VR continues ratcheting up the crazy meter until it reaches an absolutely splendid crescendo, and I had a dumb smile on my face the entire time I was playing it. 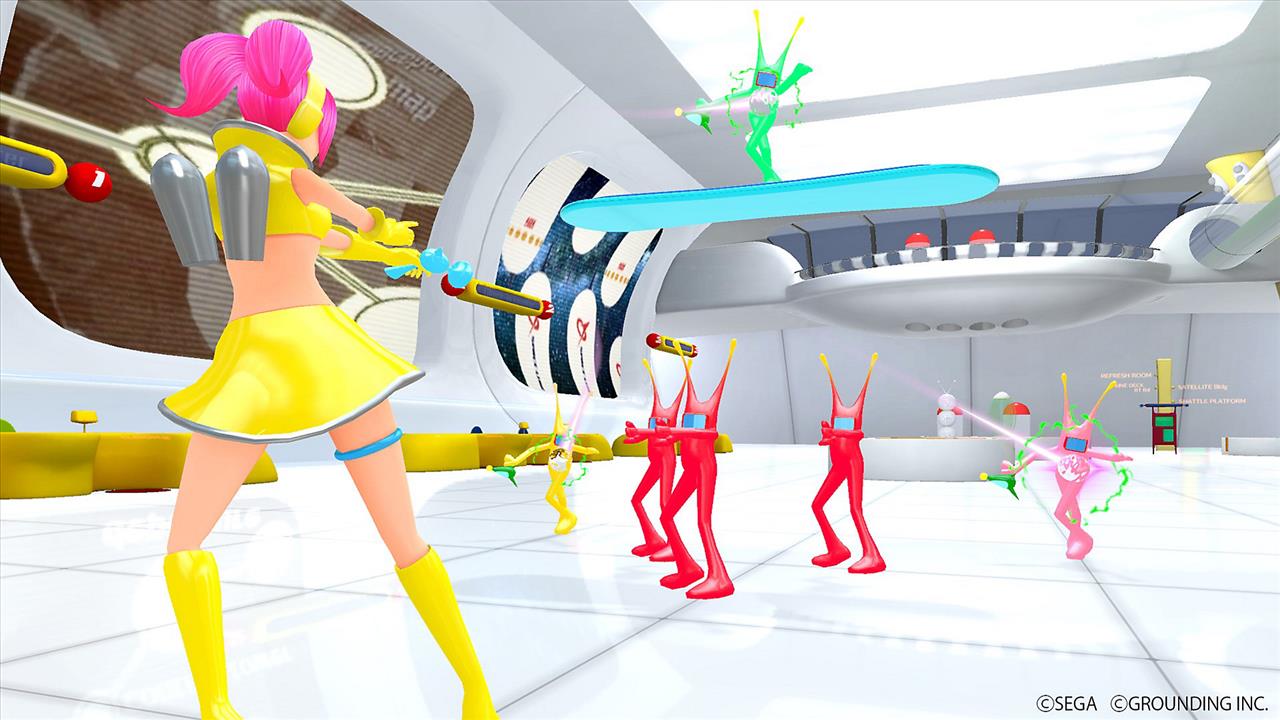 Players take on the role of a new recruit in Space Channel 5’s news team, an understudy to celebrated veteran reporter Ulala—hero of the Space Channel 5 series since the Sega Dreamcast days. Newcomers to the series should prepare to be bewildered and delighted, as the story that unfolds in absolutely incomprehensible, but utterly charming.

Ulala and her protégé stumble upon a possible alien invasion at a spaceport, and of course, the only way to avert this incursion is to hold a dance-off. Unlike the original series, which was more in the vein of traditional button-tapping rhythm games, this new VR version has players actually mimicking the dance moves of the aliens—which they kindly show off nice and slowly, almost ensuring that you will be able to follow along. 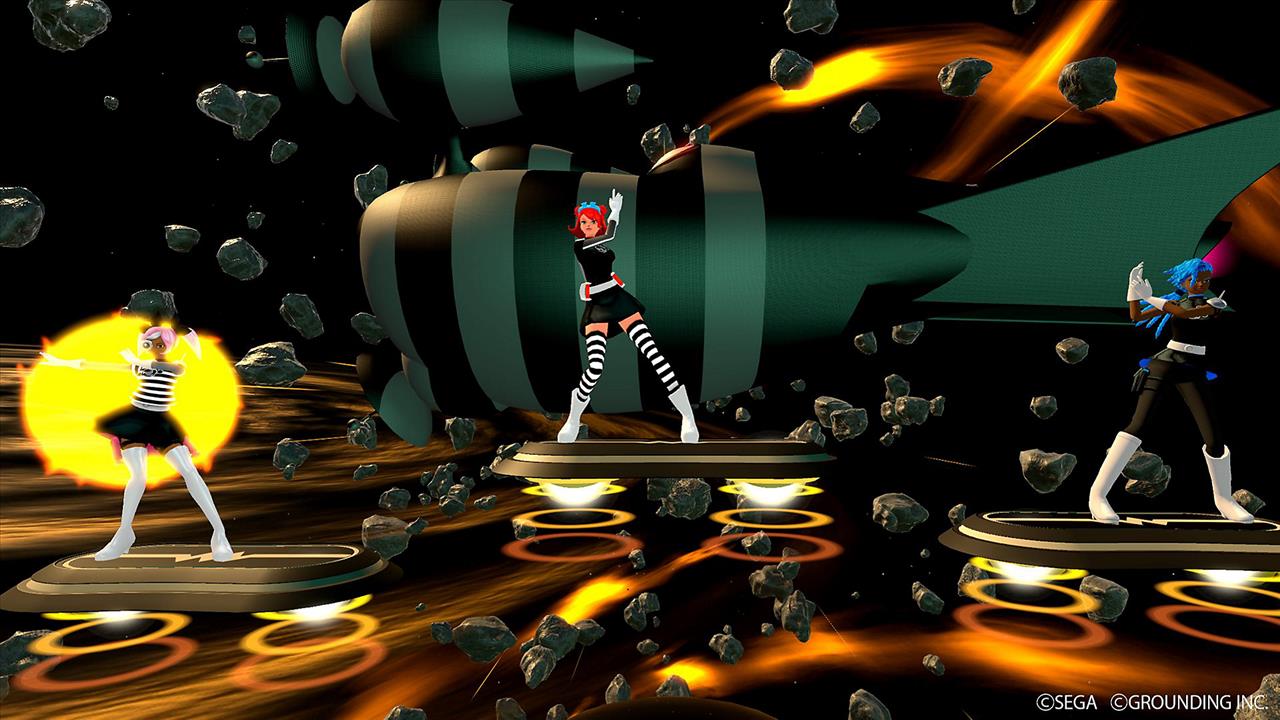 So the aliens dance, then the player and Ulala dance, and then the aliens dance, and then you and Ulala dance. Do that for 27 minutes, and you will have beaten Space Channel 5: Kinda Funky News Flash!. But what a wonderous 27 minutes it is. The scene shifts dramatically between each of the four primary songs included, and the whirling dervish of lightshows and bizarre characters had me grinning from ear to ear in wonder. I have no idea what was going on, but it was incredibly entertaining—kind of like the first time you watch Jacob’s Ladder—but happier. Playing Space Channel 5 felt very much like being plopped down into a music video for a very good band that you are utterly unfamiliar with.

The music bounces, and Ulala bounces, and the aliens bounce, and you bounce too. The dancing is very basic, with the player putting one or both of their arms into about four or five basic stances in time with the music. Not only do the aliens dance, but they literally tell you what moves to make. Ulala helpfully chants the moves back to the player in time with the music, so it’s all very monkey see, monkey do. Every now and then you have to duck to the side to avoid incoming obstacles, but that’s about as strenuous as Space Channel 5 VR gets. Beat Saber, this ain’t. 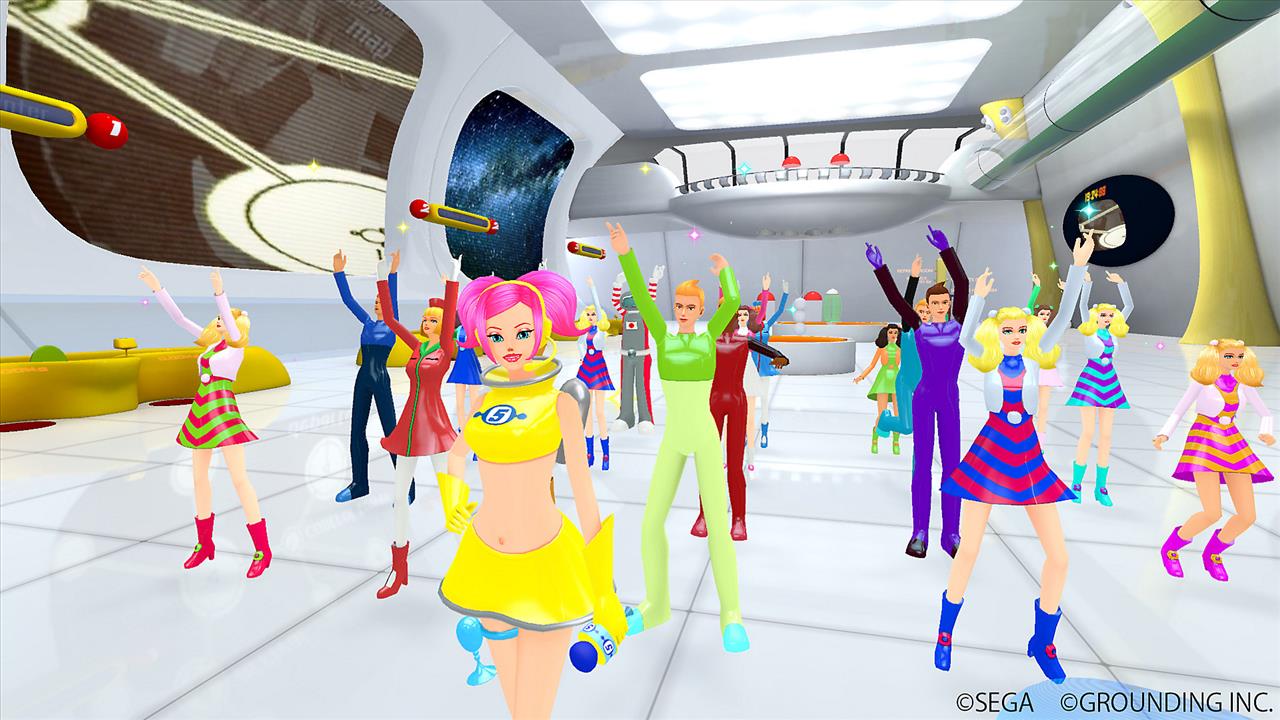 In addition to the primary campaign, there are a few extras in the package. One strange gallery allows the player to cycle through the various character models and…look at them…in every color palate. Weird. Another extra is a 100-level endurance mode. I played through about 30 or 40 levels, enjoying the music until I realized that the scenery was never going to change. At that point, I just kinda petered out. I couldn’t see a point to playing through all 100 levels. Super-devoted fans might get a bit of value out of this mode, though.

I absolutely enjoyed Space Channel 5, but I absolutely cannot in good conscience recommend it. Not for $40, at least. There is no way on this Earth that anyone should pay that much for this title. Players may be tempted to play through the campaign a second time, which would take them to a grand total of 54 minutes of play time. And the endurance mode is simply not interesting enough to push this title over the edge into “purchase even though the price is insane” territory.

DLC has already been announced for Space Channel 5 VR: Kinda Funky News Flash!, which might add some value to the package. I honestly struggled with what score to give Space Channel 5 VR, as the game is indeed well made and fun. But in the end, I want to be very clear that the amount of content you receive in no way justifies the price being asked.

Space Channel 5 VR: Kinda Funky News Flash! is an absolute delight—for the entire 27 minutes of its play time. While the music, swirling lights, and dancing are all accessible and fun, the price for this game is incredibly out of proportion to what you get for your money. Wait for an extreme sale, and then have a blast with this wildly entertaining game.