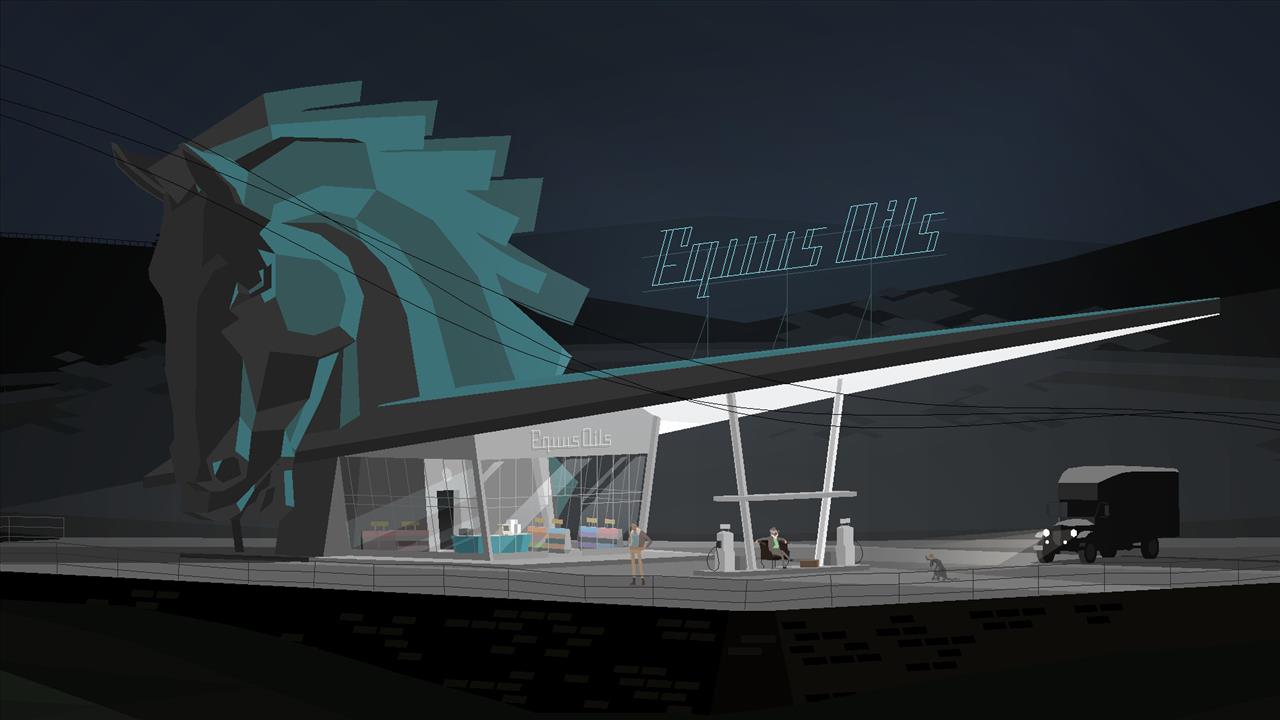 It took me too long to finish the five-episode season of Kentucky Route Zero. Not because of its sleepy pacing, though it has sleepy pacing. Not because of its dense narrative, though it has that, too. But mostly for my tendency to not want good things to end. Especially when it comes to adventure games. Specifically point-and-click adventure games.

There’s blue collar America. There’s the power company, representing the villain of our show. Power over utilities equals power over people’s lives and livelihood. Sometimes it feels like I’m piecing together some kind of dreamstate conspiracy theory. Somewhere in episode 5, one character finds himself “halfway between dreams and the afternoon sun.” That’s not any kind of spoiler, but there’s no more apt description of Kentucky Route Zero. That mild friction between relief and frustration when you can’t remember your dreams from last night? That’s the onramp to Kentucky Route Zero.

It’s entirely too bad my first run in with Kentucky Route Zero was a false start. The next story trigger failed to trigger, at the end of Act I, or so it seemed. I restarted even though I shouldn’t have. It was simply a matter of the game tripping me up with an invisible wall (essentially) when it shouldn’t have. It had me driving around Act I for literal hours, trying to find what I’d missed. I hadn’t missed anything. I’d simply obeyed when the game put up that invisible wall, when I should’ve pushed on through.

On the other hand, it taught me a fine lesson. Despite the game asking me multiple times about an injury I’d suffered, an injury I kept admitting had me feeling pretty messed up, I still relied entirely on myself to accomplish every task in-game. Without spoiling anything, I’ll just say, if somebody offers you a helping hand, maybe take it, and then proceed. 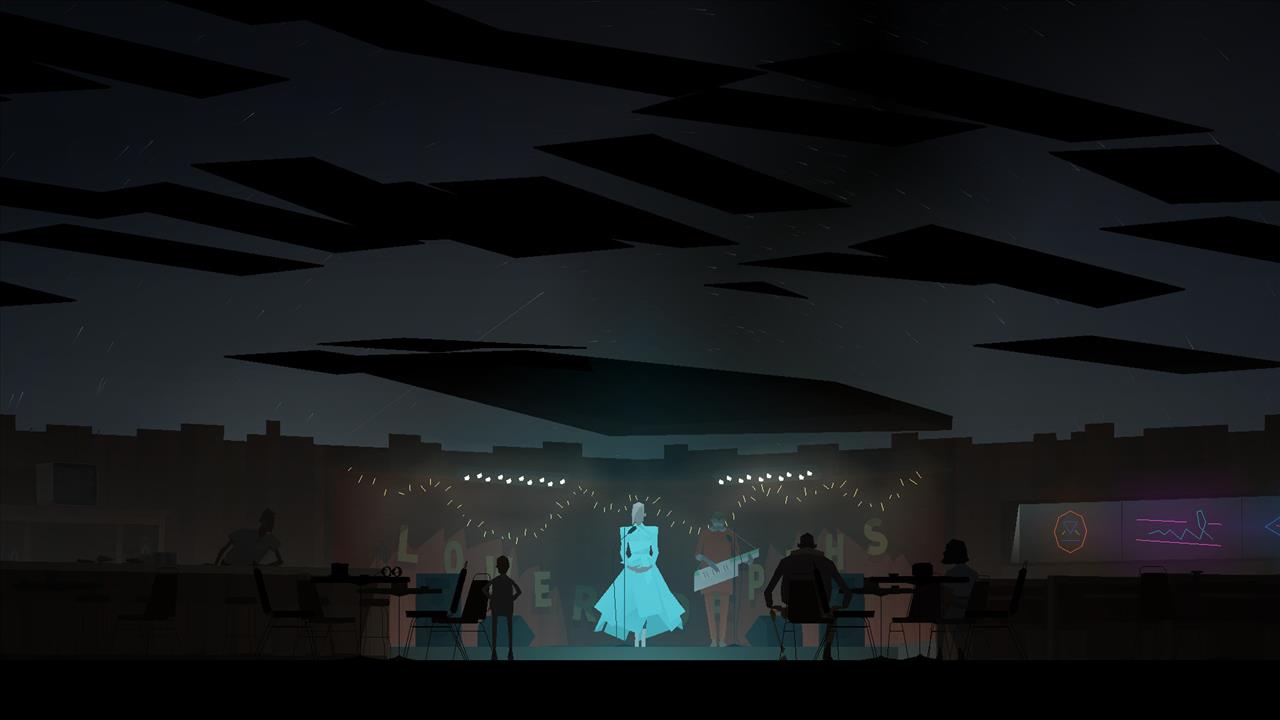 All that notwithstanding, I carved out a slightly different path the second time. Kentucky Route Zero isn’t, however, a story with wildly branching narratives. The choices you make don’t change a lot of what happens around you. They mostly change your perspective from within. You can be all business, or you can be all up in other people’s business. The destination, I think, is the same. But the journey—you guessed it—it’s all about the journey.

On that second playthrough it felt wrong changing my answers. My first, albeit false, start already felt canon. They were the choices I’d made without thinking, or at least without overthinking. So I’d retraced my steps. Despite knowing what lay along those steps, I was still excited to hit the road once more, already feeling a bit meta since this was my second time through Act I.

Very early on you’re confronted with the question of what is real and what is “not real.” Seems weird, coming from a computer of all things, to tell you what’s real or not. But in this magical-realism text-heavy adventure, you’re pretty much at the whim of what you’re told.

So you begin, an antiques and curiosities delivery driver, with a ship-to address that’s been hiding from you all night. You pull into Equus Oils, a gas station with an equine head the size of the Trojan Horse. It’s you and your straw-hat-wearing dog. There’s this older gentleman lounging on an elaborate piece of furniture between two gas pumps. He sends you down into the basement to switch on the circuit breaker. In that basement, stuff gets weird. It’s how you know you’re not in Kansas anymore.

What is real and what isn’t real certainly does become the question. The tractors trudging slow on Highway 65 seem real. Your dog—named Blue or Homer, depending on what you name her or him—seems real. But that glowing 20-sided dice you find in the dark might or might not be. Not to mention the three folks playing at a gaming table down there that don’t seem to hear you when you ask them a question. Is this a ghost story? Is this an exploration of liminal spaces?

The environment flows in and out, not making sense 100 percent of the time, like you’re in some kind of digital fever dream. Walls peel away and reveal rundown architecture. The camera pulls away and reveals a folk band in the foreground. And that’s when you’ll realize that simply sitting, watching, waiting, and listening are important gameplay tools at your disposal. Even the sound effects take on an abstract bent. A whistle sounds like the squeak of railway brakes. Or a P.A. system sounds like the tiny mechanical whir of a brokedown motor. Or my voice sounds like a robotic howl down a narrow pipe.

You’re not always the main character. You’re sometimes you, today, in your living room or computer den, watching archival film footage, or listening to old reel-to-reel audio clips. It almost feels like you should be taking notes on everything, putting on your journalistic hat. Then again, just feeling what you’re going through also seems more important than putting anything into writing. 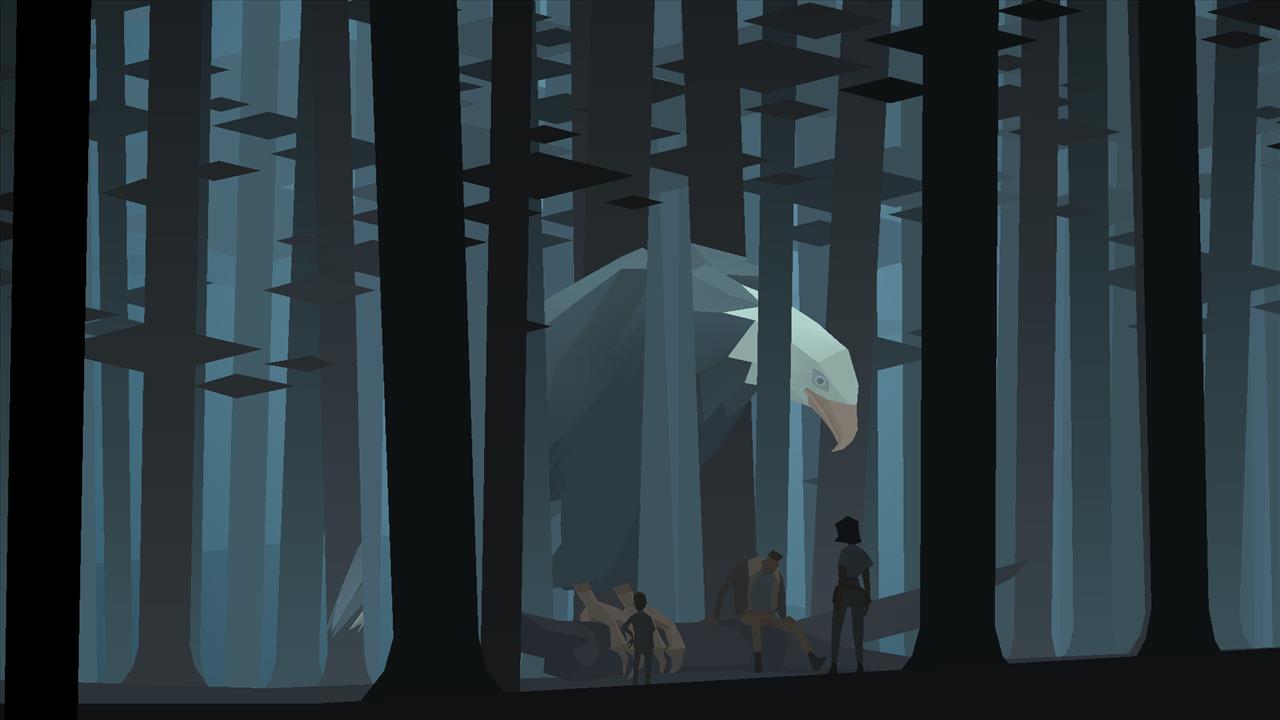 If that sounds like some weirdo video game metapsychology, well, you might be right. It’s the kind of game—the kind of storytelling, rather—that doesn’t immerse you in itself so much as it immerses itself into you. Sometimes it’s like a gif that you’ve been staring at for too long, for too many repetitions, getting faster, or the seams disappearing or becoming all the more apparent. It sometimes makes me uncomfortable.

When it’s not making me uncomfortable, it’s making my wife uncomfortable. From her place on the couch she said, “I know it’s part of the game, I get it, but you’re lucky I love you or I wouldn’t stay in this room. Turn it down a click.”

Not only is Kentucky Route Zero: TV Edition the entire five-episode season, it also includes interludes that were released for free during Kentucky Route Zero’s years-long gestation period. These interludes, in small ways, manage to broaden the stage for this text-heavy/sound-effects-laden adventure.

In role-playing games, having multiple-choice dialogue can help carve out different character paths. Good, bad. Paragon, Renegade. Jedi, Sith. But in Kentucky Route Zero, more often it feels like the multiple choices of dialogue complement what’s being said out loud. The thing you click might be what you say or do, but the thing you don’t click could be exactly what you’re thinking or preventing yourself from doing. Like Miles Davis once said about jazz: It’s not the notes you play, it’s the notes you don’t play.

Throughout all of this, it can sometimes feel like you’re out of control. Not that you’re crazy. But that you’ve taken your hands off the steering wheel. That’s why a strange open-world element enters into this when you’re given directions to the next place. That’s when you have to get dialed in, when you have to pay attention. You don’t have a GPS, on a smartphone or otherwise, when it comes to getting from one place to the next. You receive instructions that are never as straightforward as what a Google Maps will tell you. They’re like the instructions countryfolk give to one another. Head a country mile, as the crow flies, past the vehicle that’s overgrown with blackberry bushes, then hang a left and stop once the road goes from gravel to dirt. I grew up in the country. I know what it’s like to grow up on roads without a street sign for miles. 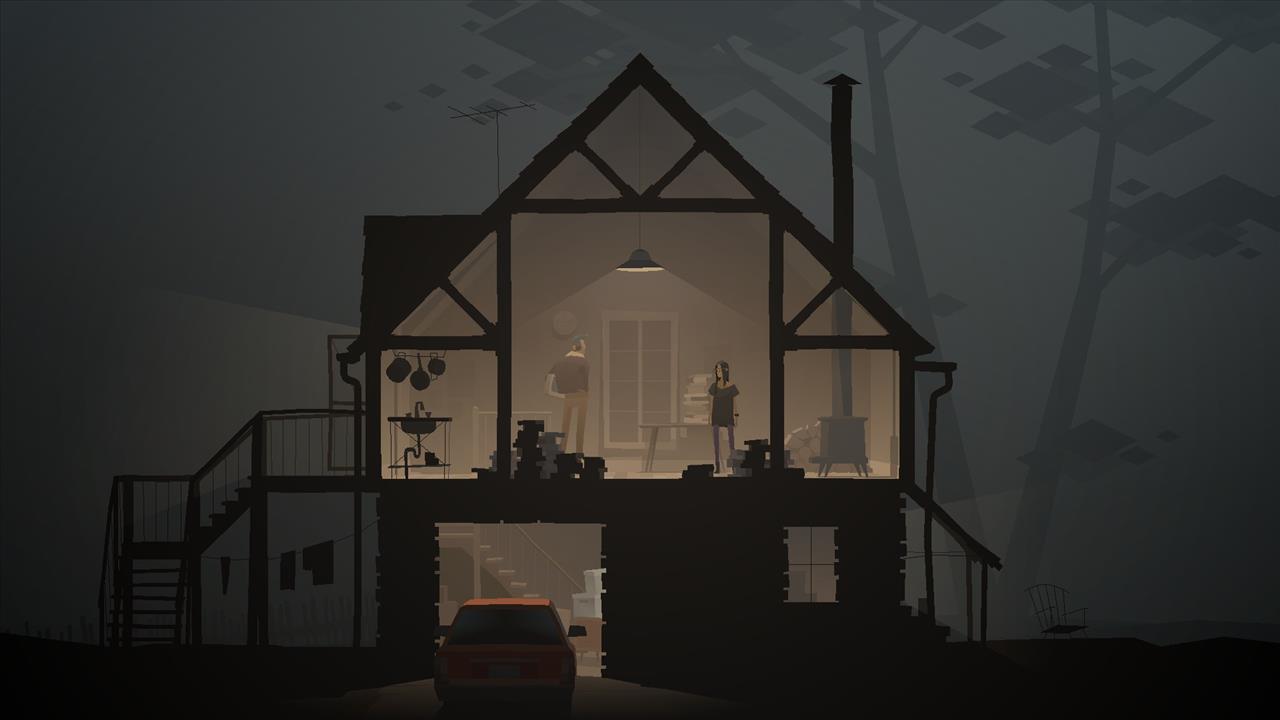 Amidst the wreckage of perfectly normal lives, we see the remains of “cultural fossils.” We meet people who’ve regressed into cavemen, using old computers to fuel their bonfires. We drive around in that old jalopy of a delivery truck, a truck that you always leave running because you never know if it’s the last time it’ll turn on. A woman and a boy travel with you eventually, somehow forming a family unit in the middle of this AM/FM fairytale, staring into wireframe models, trying to scrape together some meaning out of all of this.

Kentucky Route Zero’s economic depression really sets in when you see how corporate resources have greater value than human resources. It’s products over people, logistics over lives, employee evaluation over human emotion. Everything heads down a reverent but fearful spiral as the story delves into the alcoholism that can accompany, assuage, or alleviate depression, be it psychological or economic depression. Then comes the sober realization that, while we are not our jobs, some folks don’t or can’t know any better. They are they’re jobs. It’s all they’ve ever known. And the prospect of a work-life imbalance that suddenly comes crashing down on the other side of that balance? It’s a fearful place to be. For some, retirement is the end of the Yellow Brick Road. For others, retirement is like being crushed by Dorothy’s house.

Adventure games—the point-and-click kind—have always had a soft spot in my heart, even as my heart has hardened to certain other genres. Yet I'm often looking for something more from adventure games. I grew up in the era of King's Quest and Roger Wilco, when Sierra Entertainment was more than happy to leave me wandering through screen after screen of endless wasteland until I died. Now, in Kentucky Route Zero, instead of sketching out maps in a steno pad, I'm building in-game narratives with song lyrics, watching my protagonist literally get worked to the bone, and reviewing the State of the Nation over the course of this game's seven-year launch window. We've come a long way from the days of "guess the Rube Goldberg solution to these point-and-clicker puzzles" of yore.

Kentucky Route Zero goes so many places it’s ludicrous to name them all. It talks about doomed industries and out-of-date technologies, national health care and homeopathic medicine, online dating and college radio, melting polar ice caps, lottery tickets, emotional support animals, sibling rivalry, drinking on the job, freak accidents versus acts of God, or that one time you did something wrong and then that’s all you can think about for the next 20 years. It’s a living document. Not that the game changes if you play it again, but you will have changed when you play it again. Even if you take the same old route, things will have changed.

Part point-and-click radio play, part adventure game audiobook, Kentucky route Zero is as much of a journey in sound as it is a meditation on surrealism. I’d nominate it for the Booker Prize in literature before I’d hand it a Keighley statue at the Video Game Awards.