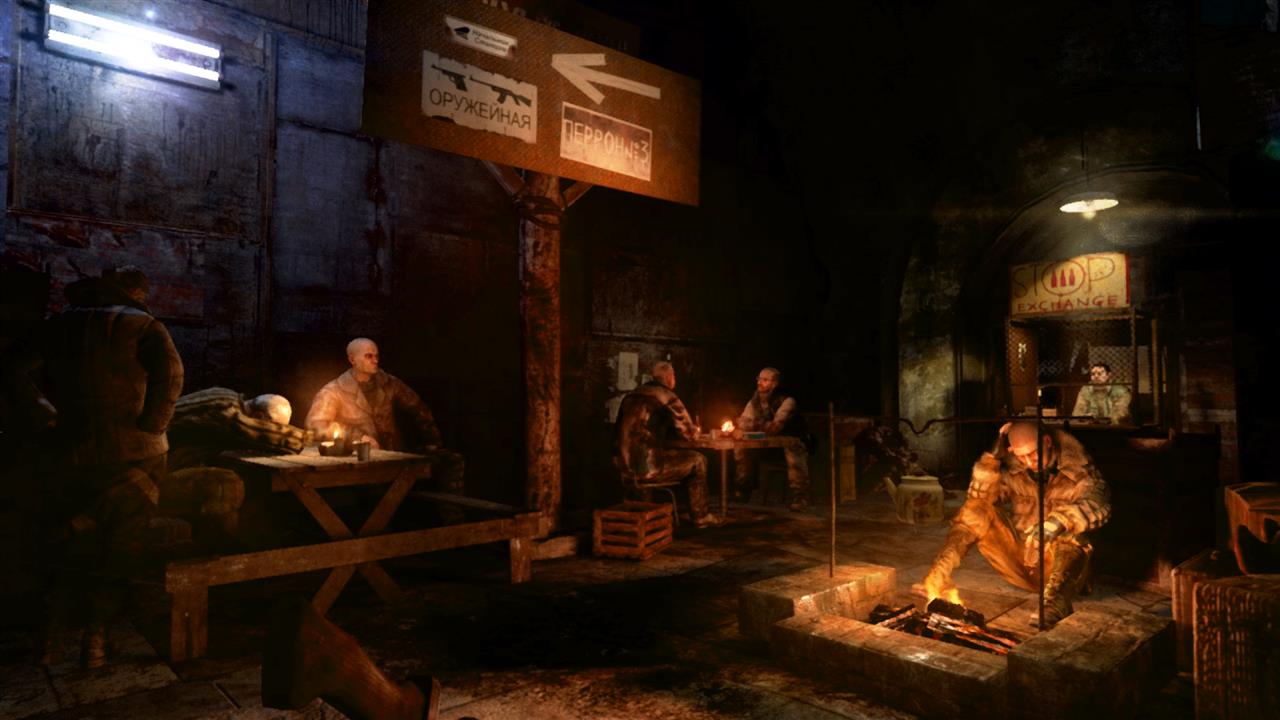 The early-to-mid 2000s was an intriguing time for first-person shooters. In the wake of Half-Life 2, Far Cry and Doom 3, we saw younger, hungrier studios hit the scene with experimental takes on the genre. This trend couldn’t have been truer than in Eastern Europe, where a number of developers birthed what would be retrospectively (and affectionately) called the “Slav shooter” sub-genre. GSC Game World kicked things off with S.T.A.L.K.E.R.: Shadow of Chernobyl, an incredibly ambitious, persistent open world interpretation of the classic Russian novel Roadside Picnic. S.T.A.L.K.E.R. was audacious for its day, but the game that would play itself out with or without player interaction was also horrendously buggy, and didn’t reach its true potential until after years of both official and fanmade patches dropped.

The sadly now-defunct Digital Spray Studio took the Half-Life 2 approach with their criminally underrated and underplayed shooter You Are Empty. While hobbled by mixed production design, tragically cut features and a baffling lack of exposure (I think I was one of five people who played and enjoyed it), You Are Empty’s subtle environmental storytelling left a lasting impact on those lucky enough to experience it. Its levels were a mix of slow burn, free-form exploration and linear progression, and in its best moments the art direction nailed a sense of haunting, industrial Ukrainian despair that Half-Life 2 couldn’t even touch. It’s really one of the flawed-but-great unsung gems of the era.

And then, of course, you have Metro 2033 and its sequel, Metro Last Light, a pair of games that took the middle road. Based directly on the best-selling Metro 2033 novel by Dmitry Glukhovsky, the setup is bleak in a uniquely and unmistakably Slavic way. Twenty years before the game begins, a nuclear holocaust annihilates everyone in Russia…that is, everyone who wasn’t belowground in the country’s metro tunnels the moment the bombs fell. The beleaguered survivors must come to terms with the fact that everything and everyone they knew and loved is ashes, and they must scrape together what little semblance of society they can in the metro system. One such survivor is Artyom, who was only a young boy when the nukes landed. 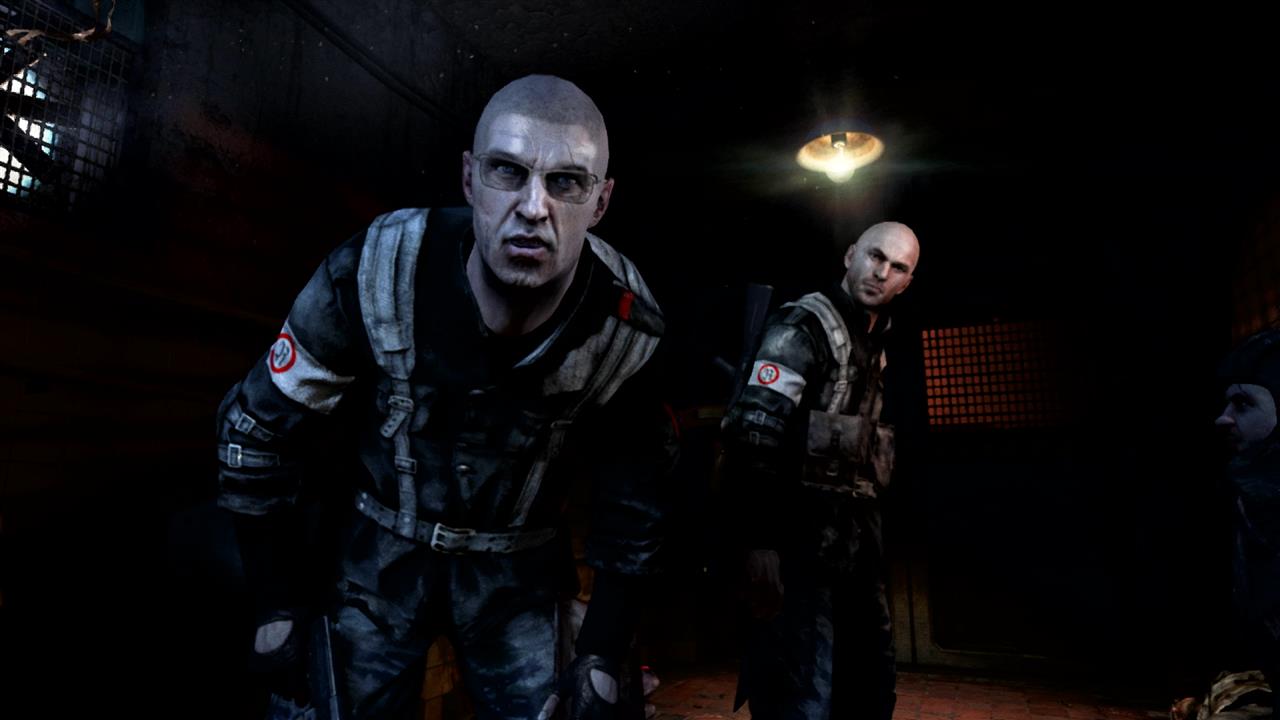 As the protagonist of the game, Artyom is sent on a mission by his friend Hunter, an elite soldier who disappears while investigating an anomalous disturbance. Aside from the human bandits and hideous mutants that attack Artyom’s fragile metro community, a new more sinister threat has arisen: the Dark Ones. These otherworldly beings appear to be nigh-invulnerable and almost instantly lethal to any humans who encounter them, but rumor persists that they are merely misunderstood, and their methods of communication are simply incompatible with human life. That is…for all but Artyom, who can psychically commune with the Dark Ones and survive.

Without spoiling more of the plot, it’s clear that developer 4A Games wanted to strike out in a new, narrative-focused direction. I can’t blame them; 4A Games was founded by two key members of GSC Game World, who left late in S.T.A.L.K.E.R.S.’ development due to abysmal working conditions and insulting pay. Shortly after S.T.A.L.K.E.R. shipped, GSC Game World laid off its entire art department, who all subsequently landed at 4A Games. Burned by the mismanagement and haphazard direction on S.T.A.L.K.E.R., the 4A team was committed to making a tightly focused gameplay experience built around a strong story, which resulted in a unique mix of styles when Metro 2033 released. 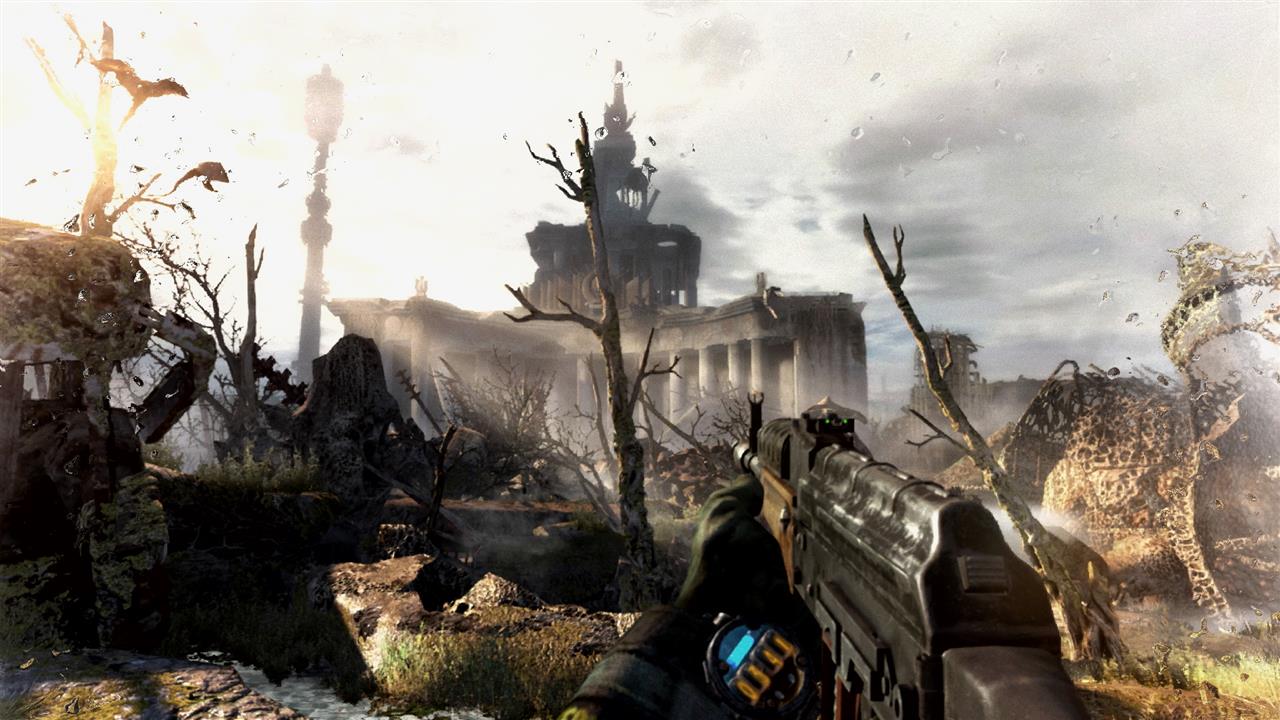 The end result is an unmistakably “2010” kind of game. Perhaps appropriate to its predominantly subterranean setting, Metro 2033 is a very linear game, and it has a lot more in common with the Call of Duty and Medal of Honor games of its day than S.T.A.L.K.E.R. There is first-person shooting, weapon customization and occasional exploration off the immediate beaten path, but for the most part this is a game about going in a straight line and experiencing the narrative. When you’re not being led by the nose by gravelly voiced NPCs with thick Russian accents, you’re standing at the eventual objective, waiting for said NPCs to finally catch up and trigger the next part of the story, be it shoving a crate out of the way or throwing a rusty old lever. It doesn’t help that the game leaves the distinct impression that something was lost in translating the novel’s original plot and texture to English. What is supposed to be stark, barren and soulful insights muttered by Artyom between chapters comes off as edgy and boastfully cynical, like the depressed composition book ramblings of a melodramatic, faux-nihilist teenager.

When Metro 2033 occasionally does let you off the chain to explore, the potential of the gameplay—and setting—start to shine through. The minimalist UI is a window into all sorts of potential simulation aspects; Artyom’s objectives are scrawled onto an actual journal that he holds up, and illuminates with a distinctive lighter built out of an old 7.62mm cartridge. Speaking of cartridges, the game’s economy revolves entirely around ammo; pre-disaster bullets boast a hefty punch and high accuracy, but are also invaluable as a sort of hard barter currency. You’re better off hoarding military-spec bullets for trade and loading your guns with less effective (but more common) post-disaster ammo…but in desperate situations, those pre-war rounds can really save your skin. Most of the brief exploratory segments happen above ground in the irradiated hellscape that used to be Moscow, so Artyom must don a gas mask to avoid inhaling the highly radioactive dust. You can consult his watch at any time to see how long until his mask’s current filter runs out, and if you take too much damage to that flimsy mask, you’re sucking isotopes. 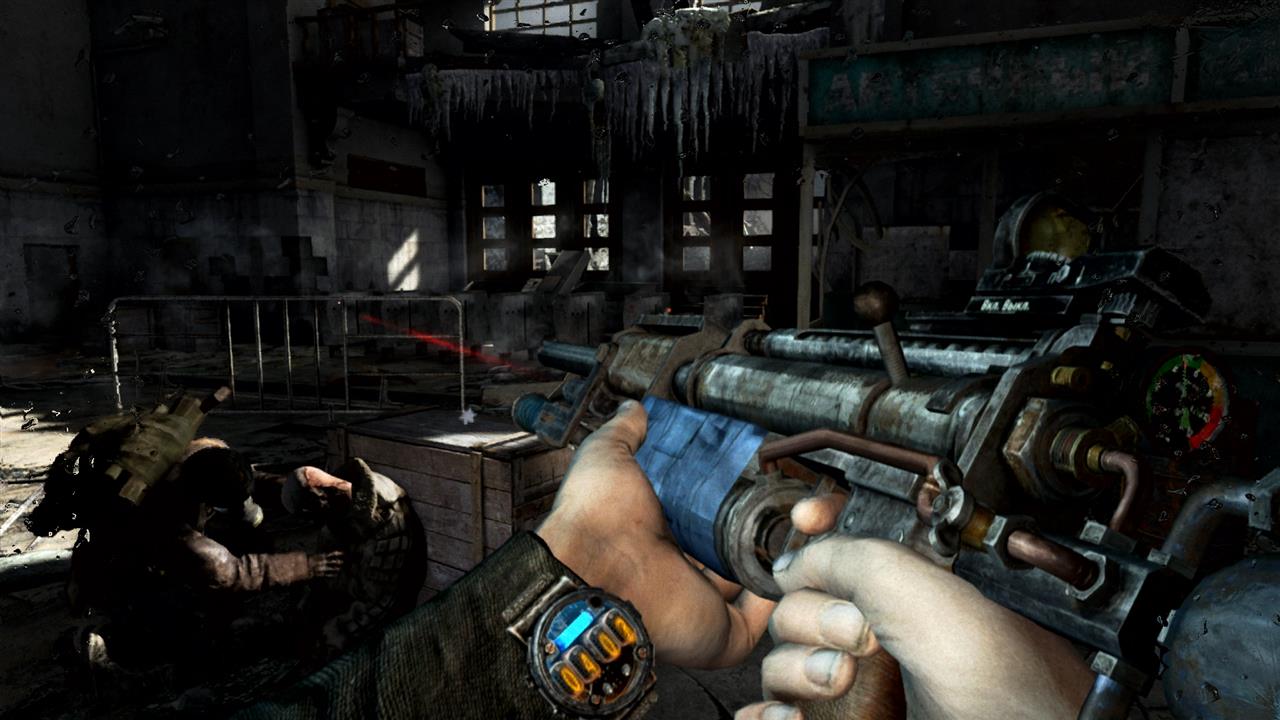 It’s just frustrating that all of this glorious world building is constrained by linear gameplay, and a pretty clunky engine at that. The environments are full of geometric details, and if Artyom gets caught on any corners he screeches to an abrupt halt. Aiming and weapon handling is also noticeably stiff and clumsy, made all the worse when the game asks you to battle off waves of galloping mutants or suffer through one of its pass/fail stealth sequences. Metro 2033 is not necessarily a game you play for the gripping, addictive gameplay; rather, you play to experience the breathtakingly realized world of Dmitry Glukhovsky, brought to vivid and intricately detailed life by 4A’s artists.

This dedication to the craft followed in 2033’s sequel, Metro Last Light. 4A acknowledged their freshman effort’s problems and redoubled their efforts to build a tour de force that was satisfying both in story and gameplay. Last Light refines and expands nearly everything its predecessor introduced. While still a linear, narrative-driven experience, Last Light tightens up the shooting mechanics to deliver a truly satisfying concoction of action, stealth and periodic wasteland survival. I felt like I was fighting 2033’s archaic design at every turn; when I got to Last Light, instead I was hooked on its heady mix of post-apocalyptic storytelling and adaptive level-based gameplay. I can see here the seeds of freeform play that inspired Wolfenstein: The New Order. This does reduce the survival horror elements of the first game, but in terms of playability and fluidity of experience, I personally feel it’s a fair tradeoff. 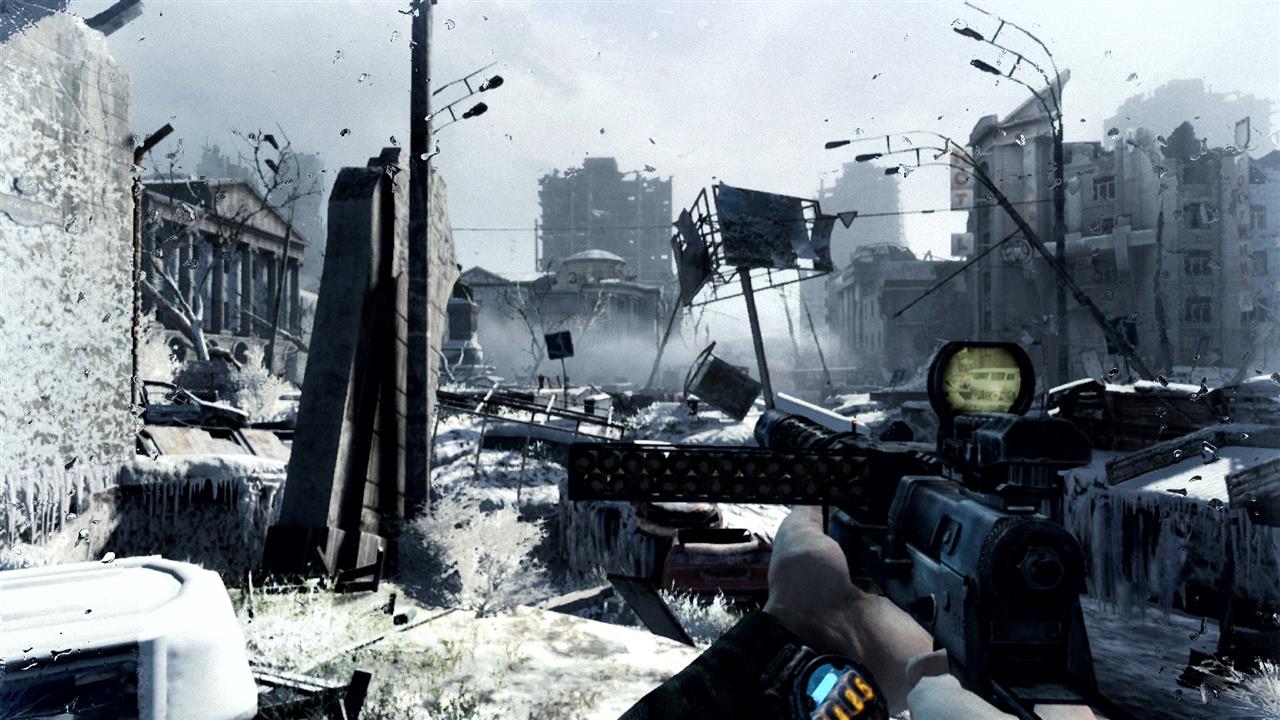 So by modern standards, Metro and its sequel is a mixed bag that eventually gets really good, delivering an FPS experience that feels oddly familiar due to its far-reaching influence on other titles, but with a literary flavor and texture that keeps it distinct. But now we come to the all-important question: How does this collection play on Nintendo Switch?

Well in a nutshell, pretty damn good, with a caveat or two. Numerous Switch ports are handled by third-party studios, like the esteemed talent at Feral Interactive (Alien: Isolation), the magicians at Saber Interactive (The Witcher 3) or the unstoppable maniacs at Panic Button (Doom, Wolfenstein: The New Colossus). Metro, however, was ported by the original developers at 4A Studios, and the results speak for themselves. Knowing the ins and outs of their own engine, the Switch ports retain nearly all of their graphical fidelity. Textures aren’t quite as crisp as the ports on PS4, but they are remarkably close and you probably won’t notice unless you’re really looking. A fairly robust adaptive resolution scale keeps the game looking reasonably sharp while maintaining a nearly flawless 30fps. 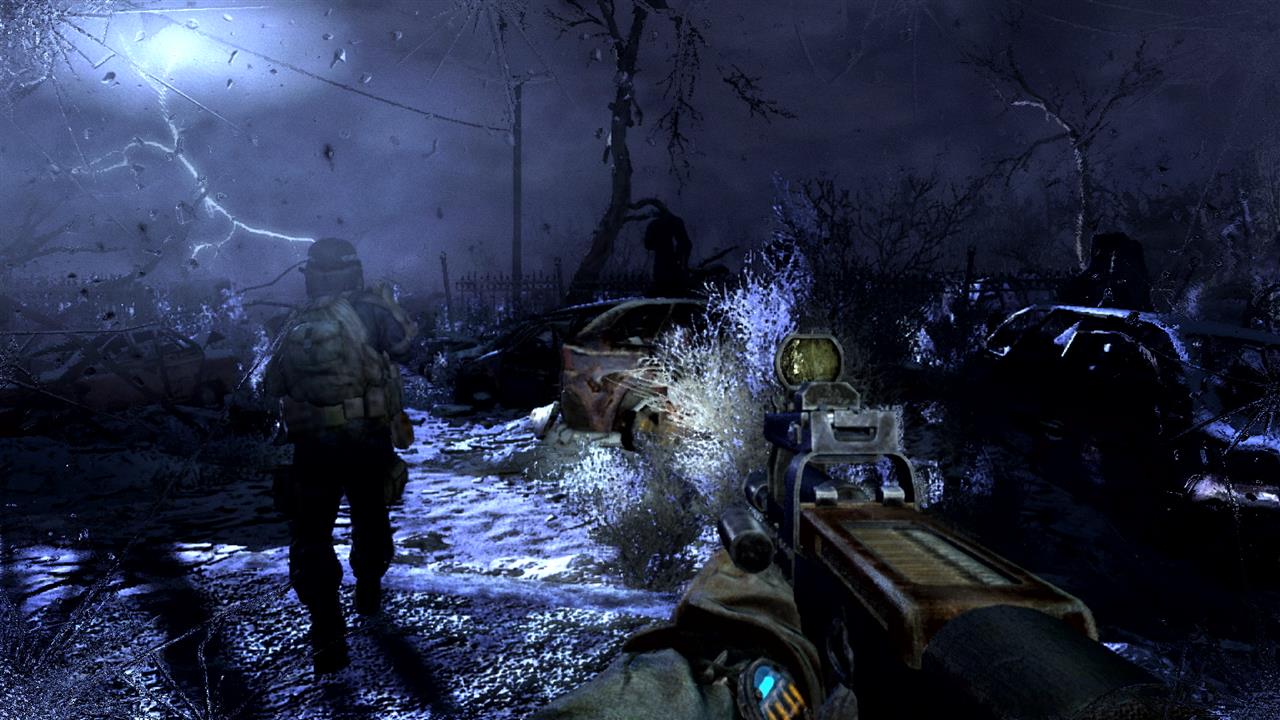 The only real issue I ran into was loading times. Booting into a saved game and loading between big areas can take up to a minute on every session, which is disappointing considering how snappy the Metro Redux collection is on even a moderately powerful PC. That said, loading from death only takes a few seconds. Here’s hoping 4A can shave some time off those loading screens with a patch or two.

These few minor issues aside, Metro 2033 and Metro Last Light are incredibly solid ports on Switch that sacrifice almost nothing. You won’t get exact parity with PC or current-gen consoles, but 4A have gotten the Switch ports so close that what you do have is an extremely impressive portable showcase. Metro 2033 might be an acquired taste but its sequel, Last Light, is one of the standout action-horror-narrative experiences of the last generation, and now you can carry both games around in your backpack. If you’ve never explored the haunted post-nuclear subway tunnels of Moscow, this Switch port is the perfect excuse to strap on a gas mask and venture forth.

Regardless of your feelings on the first two Metro games—which are quite good in their own right—this is a masterful portable collection handled with an expert hand by the games' original developers.