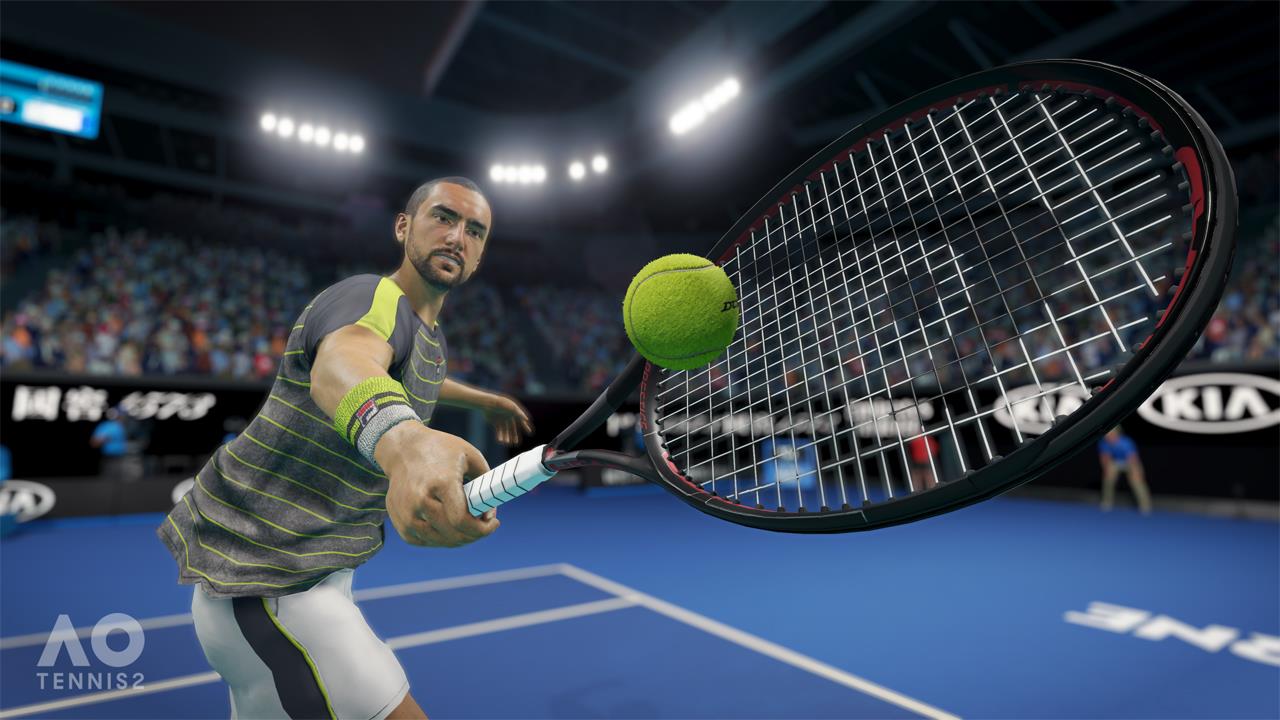 Alright, let’s get the tennis puns out of the way.

Some AO Tennis 2 reviews will launch a volley of backhanded compliments. But, no matter how you slice it, that’s poor sportsmanship. Don’t let these reviews fool you. AO Tennis 2 isn’t an ace tennis simulation, and it has its fair share of unforced errors, but it does nail a few winners.

Phew. Okay, now that we’re past that, let’s move onto the review.

To be transparent, I did not play the first AO Tennis, which hit the market in May 2018. Though, from what I can tell through gameplay videos and reviews of the first release, the second installment of the AO Tennis franchise has come a long, long way. It still has plenty of room for growth, but the folks at Big Ant Studios have demonstrated their unwavering commitment to listening to their community.

Perspective matters. A tennis simulation isn’t for the masses, it’s a niche game for a specific market. If you’re not at least a casual tennis fan, the odds of you enjoying AO Tennis 2 are low.

I liken it to baseball. Although baseball is a much bigger sport in America, people tend to either love it or loathe it. My response to baseball dissenters is always the same: If you didn’t grow up watching or playing baseball, you won’t understand its intricacies. That sentiment is true for a lot of life’s activities, and I think it holds up for tennis too—at least to an extent. I think it’s easier to appreciate tennis without a prior tie to the sport. At least at a high level, it’s simpler and faster. 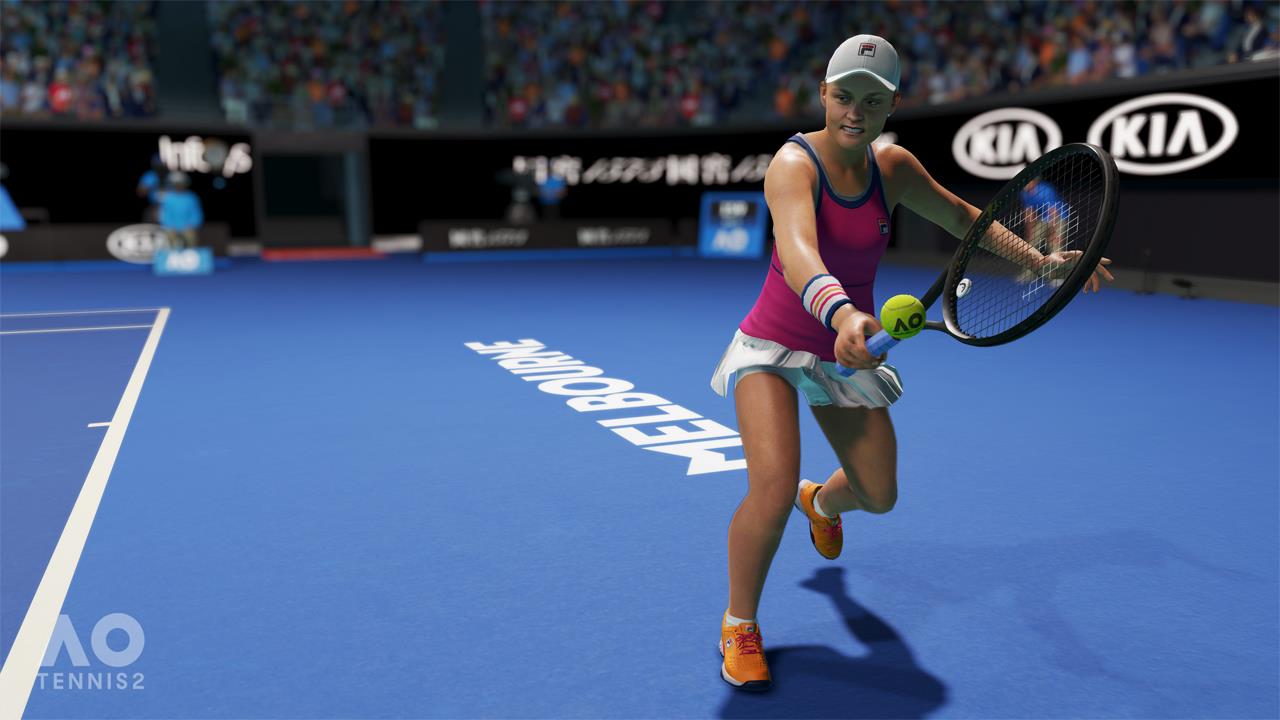 To be a reputable judge of AO Tennis 2, it helps to have an existing appreciation for the sport of tennis.

Having played tennis my entire life, I booted up AO with a formidable knowledge of the sport. I’m not a hardcore fan by any means. I don’t follow a particular tennis pro or consume tennis content with radical religious fervor. I try to watch Wimbledon every year, and I catch tennis highlights on SportsCenter, but that’s the extent of my fanhood. I prefer to play the sport rather than watch it. Tennis is a mental battle as much as it is a physical one. It’s a beautiful blend of strength, finesse, and strategy.

AO makes an admirable attempt to capture the mental and physical endurance tennis requires. From balancing your career mode champion’s schedule to outlasting relentless rallies with AI opponents, the intrinsic challenges of tennis are accentuated. But the gameplay fundamentals could use improvement. 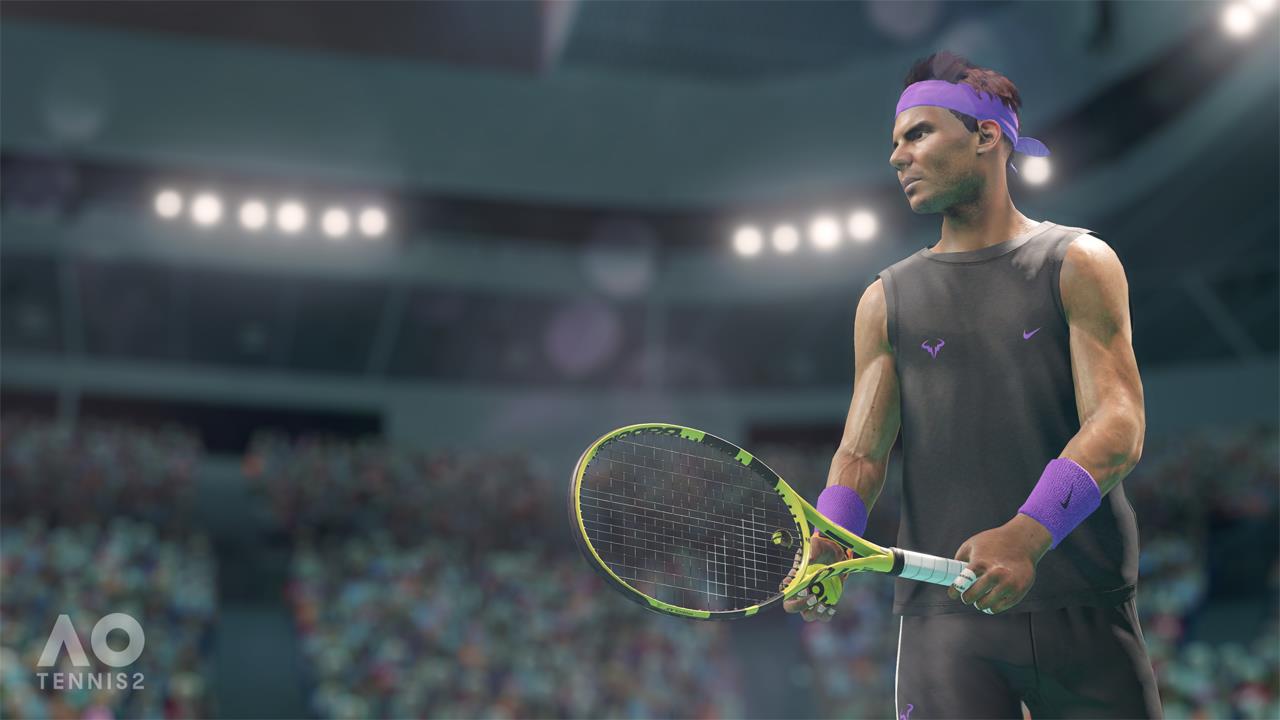 Like any sports simulation, to generate intrigue and replay value, the gameplay fundamentals have to be right. The controls need to be fluid, the graphics need to be captivating, the audio needs to be convincing.

Why? Well, because that’s like 80 percent of a sports game. If you’re going to produce a simulation of a real-life activity, it needs to feel real. At the end of the day, if you don’t enjoy the actual gameplay, then clean menu interfaces, diverse game modes, and in-depth customization tools don’t matter.

Regarding these fundamentals, AO Tennis shows signs of progress—but it’s not all the way there yet. The graphics are good, but they’re not quite up to par with other major sports titles. Meanwhile, the audio could use some serious work—it just feels off. Matches don’t have commentary, which isn’t necessarily a bad thing since video game commentators are repetitive anyway; I just like to have the option. The main audio issue I found was crowd noise. Crowd reactions are exaggerated or mistimed enough to be noticeable, which takes away from the experience.

But the controls deserve the most attention and critique. There’s a steep learning curve (for a video game, anyway) that will frustrate the most patient player. The controls can feel cumbersome, which is a direct result of using one stick to control both your player’s directional movement and your shot’s positioning. This setup makes hitting consistent quality shots a challenge, leading to longer rallies since it’s harder to finish points. The result is a veiled tension that’s similar to the real-life tension of a back-and-forth tennis match—but it’s not the same. It feels more like a circular frustration rather than a genuine challenge, especially on higher difficulties.

Expect to be frustrated when you first start playing. It takes a lot of repetition to get a firm grasp of shot timing and footing. I can’t tell you how many times I've hit a perfect serve only to follow up with a feeble half swing due to poor footing. My 20-something-year-old career mode champion regresses to a geriatric approach shot far too often.

But I’m a glass-half-full kind of guy. The challenge of outdueling an opponent that doesn’t miss, while feeling out the controls, is enough to spark my determination. It’s a tough balance, but AO presents eight difficulty options to choose from, so you can tinker until you find the right fit. 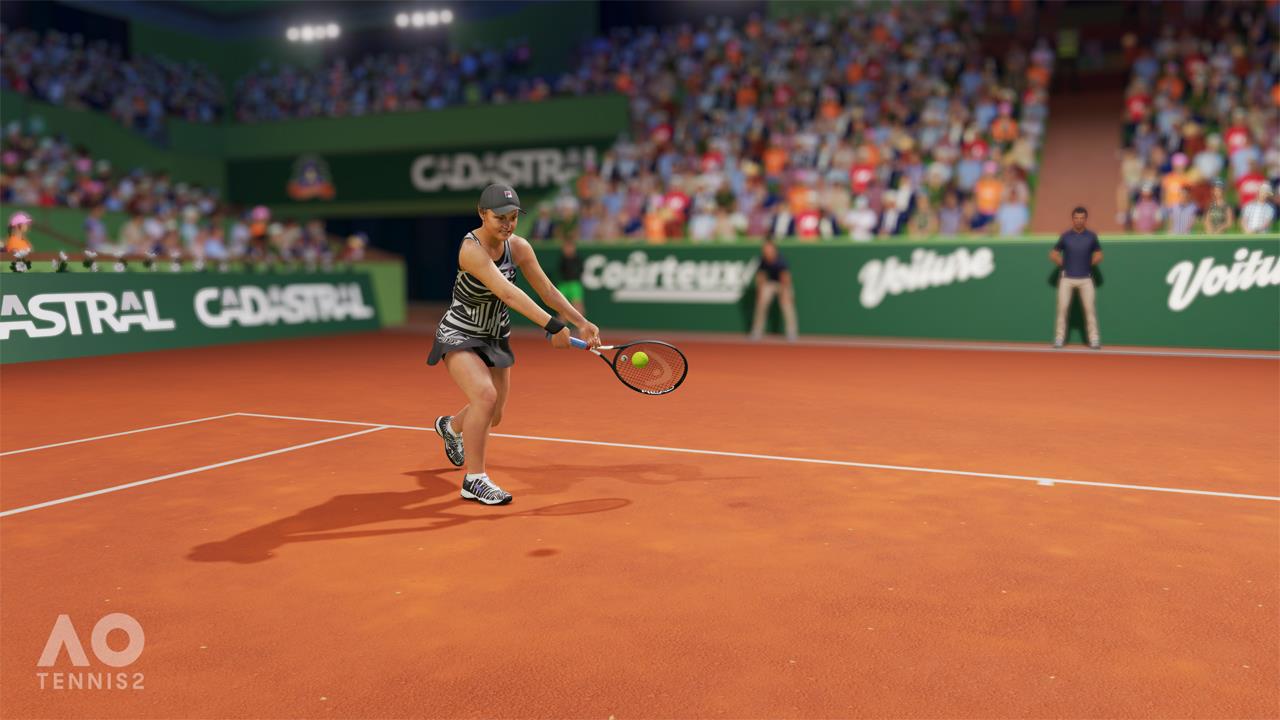 I must say, I was disappointed to realize the majority of big-name players and venues weren’t in the game. No Roger Federer. No Novak Djokovic. No Andy Murray. No Serena Williams. No U.S. Open or Wimbledon.

Credit to Big Ant Studios for landing the likes of Rafael Nadal and Gael Monfils. AO just doesn’t have the licensing rights to include a lot of popular players and venues (outside of the Australian Open, obviously, since Big Ant is located in Melbourne).

But there’s a solution.

The AO Tennis franchise’s biggest asset is its community.

Couple hardcore fans with AO’s intricate customization tools and you’ve got a game with a much higher ceiling. Although AO lacks a full dosage of star power, the game’s community has been committed to recreating popular pros and venues from scratch. Thanks to roster sharing capabilities, you can download community variants of your favorite players. Make sure you download before starting your career though, it won’t update along the way with newly acquired players. 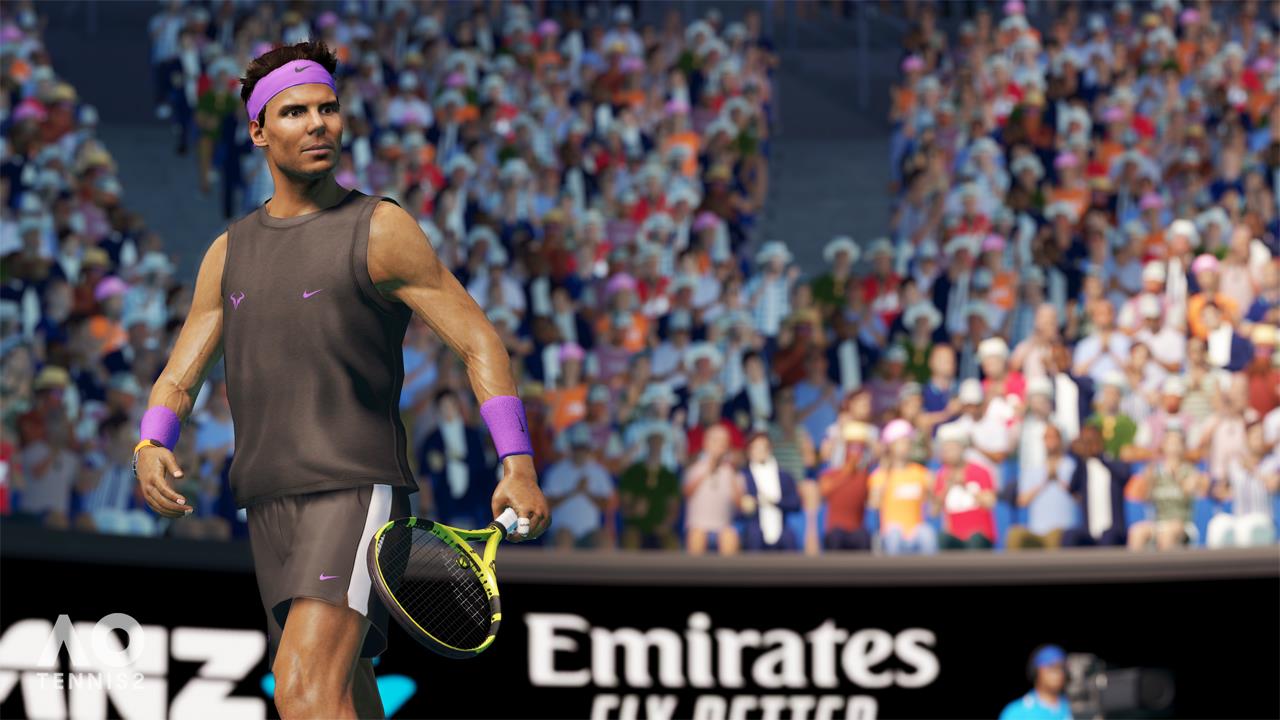 AO offers a full-fledged career mode that takes you around the world as either an existing pro or a new up-and-comer. If you were really into recreating yourself or Björn Borg or whoever, you have the tools to do so. AO’s customization capabilities are extensive. If you’re a perfectionist, you could spend hours on this component alone.

Beyond this, AO’s career mode is pretty well designed. You’re inserted into the life of a professional tennis player, balancing tournaments, training, press conferences, sponsorships, and rest (because you’re human, after all). There are some cheesy cutscenes, which seem to be popular in career modes, nowadays, but I’ve seen worse. 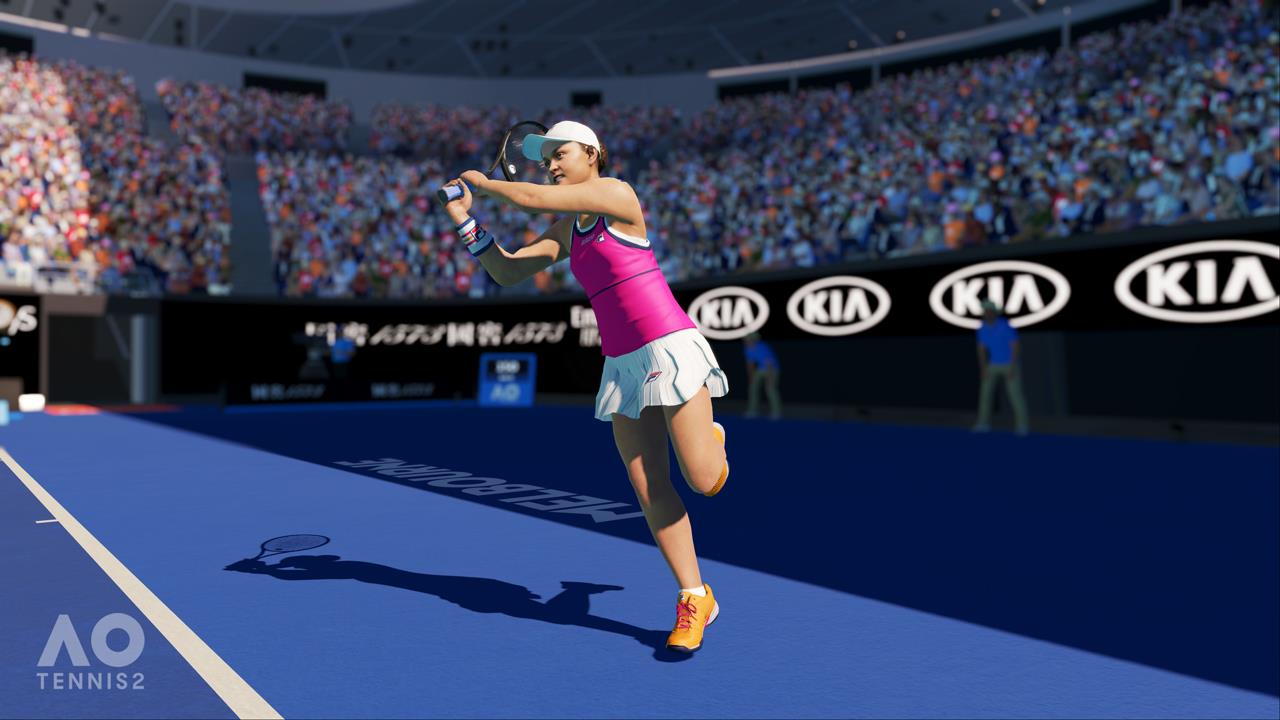 The career progression is handled well. You can train to increase your skills, e.g., flat serve, backhand topspin, etc., and compete in tournaments to win money, which can be used to bump up attributes further or hire support staff members.

When it's all said and done, Big Ant Studios deserves kudos for producing a tennis game, which has been an underserved market for quite some time. The second installment is leaps and bounds better as a result of Big Ant's commitment to developing a better product. AO Tennis 2 isn't an ace, but it's not a fault either.

A solid, but still returnable, second serve that could use a little more mechanical tinkering.