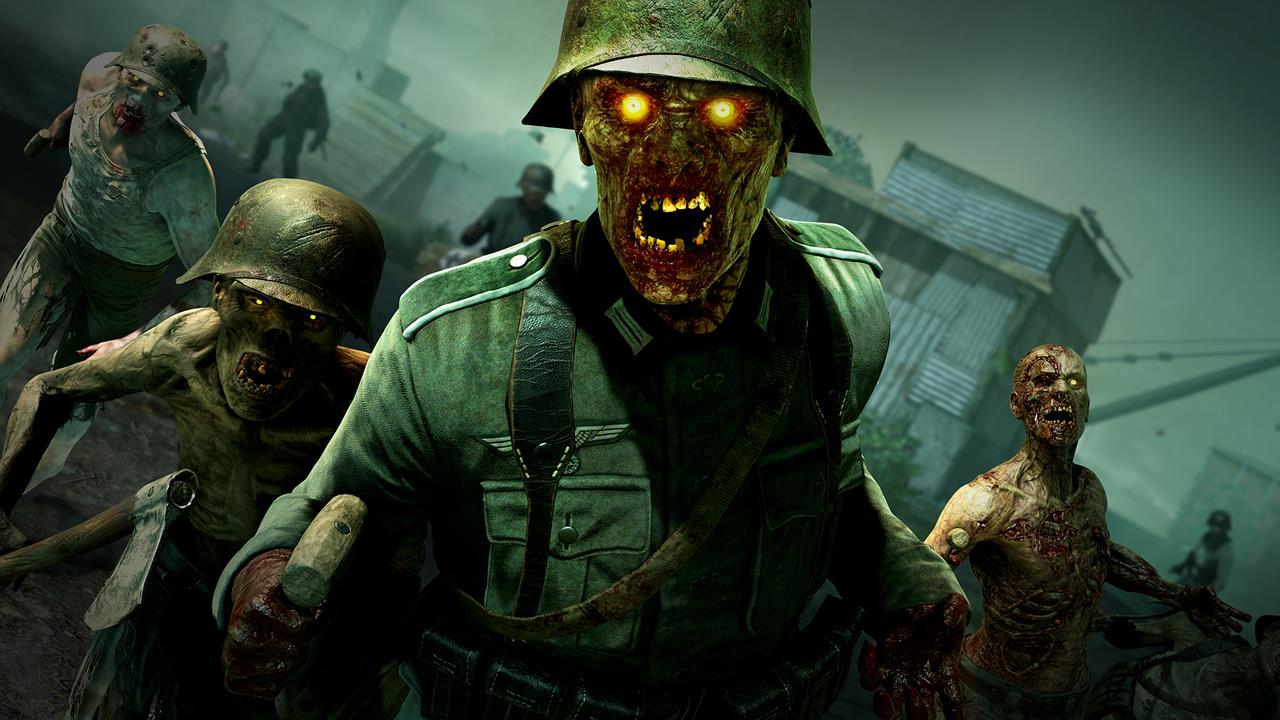 These days, zombie games are a dime a dozen. The endless tide of the undead seems to find its way into a new game every month or so. At this point, we've certainly blown well past zombie fatigue and into pure zombie exhaustion. I mean, the thought of playing another zombie game could be enough to make anyone's stomach churn. But—and of course, there's a but—what if the newest zombie game ships with a pedigree?

Enter Zombie Army 4: Dead War, the sequel to the now more than five-year-old Zombie Army Trilogy. Originally a standalone expansion to the Sniper Elite series, the Zombie Army games blended their marksmanship-focused third-person shooter with the ever-classic tropes of the zombie genre in a way that sparked joy in many a gamer.

The first and most important thing to note about Zombie Army 4 is that it's not a Sniper Elite game anymore. Although the game still arms you with a rifle, it's notably more "arcadey" than its predecessors. Unlike the old days, your secondary weapon and pistol are no longer afterthoughts reserved for those moments when the hordes of zombies finally close in. More often than not, I found myself swapping weapons to better deal with the threats that laid before me, rather than feeling as though I had to stick to my rifle at all times. For the Sniper Elite purist in me, this was a little painful, but there are still plenty of times where the game challenges your marksmanship skills.

The biggest addition to the game is an actual bona fide progression system. Rather than just setting your loadout, the game has a full leveling system that gives players access to different skills, equipment modifiers, and much more. Every gun can be upgraded to modify stats or add unique damage types, such as electric, incendiary, and holy. Even the four different playable characters have minor stat tweaks between them that cater to different playstyles. Not only does this increase the overall depth of the game; it extends the replayability of the game beyond a single story completion.

The only real downside of the game's progression system was that it felt a little too lengthy. Even after a full run of the story and several rounds of horde mode, I was still well short of many upgrades. Ultimately, it felt like I'd experienced so much of what the game had to offer, but there was still too much locked behind levels I would probably never reach. 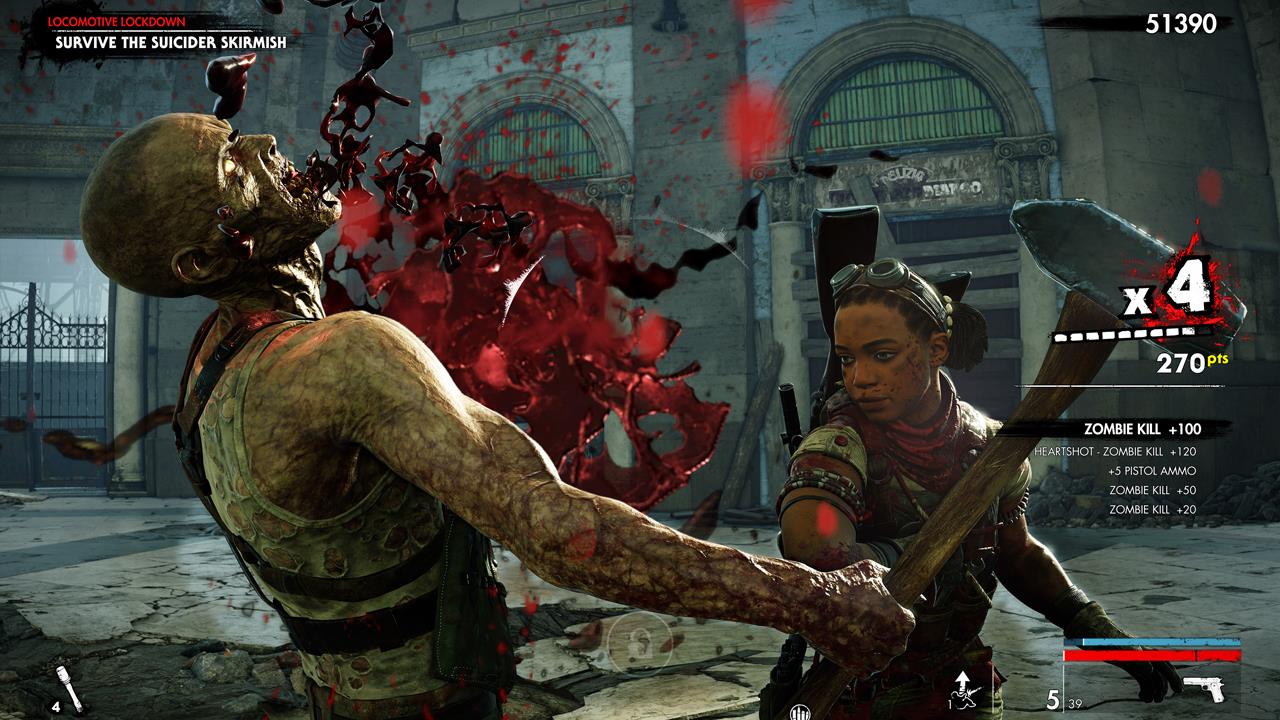 Enemy variety is healthy in Zombie Army 4. Besides your run-of-the-mill zombie, players can expect to run into a wide variety of special zombies designed to throw a wrench in your best-laid plans. Many of the special zombies make a return from the original trilogy, but there are some new ones added to the guest list, like riot shield zombies that lob grenades at you from a safe distance. Oddly enough, the distribution of the special zombies is somewhat lopsided. During the story, you come across some blind zombies that charge at you when you make too much noise. They were notably tough to fight the first time I encountered them but then were even more notably absent for almost the entirety of the rest of the story. It was weird to have this unique enemy type see almost no use during the campaign. 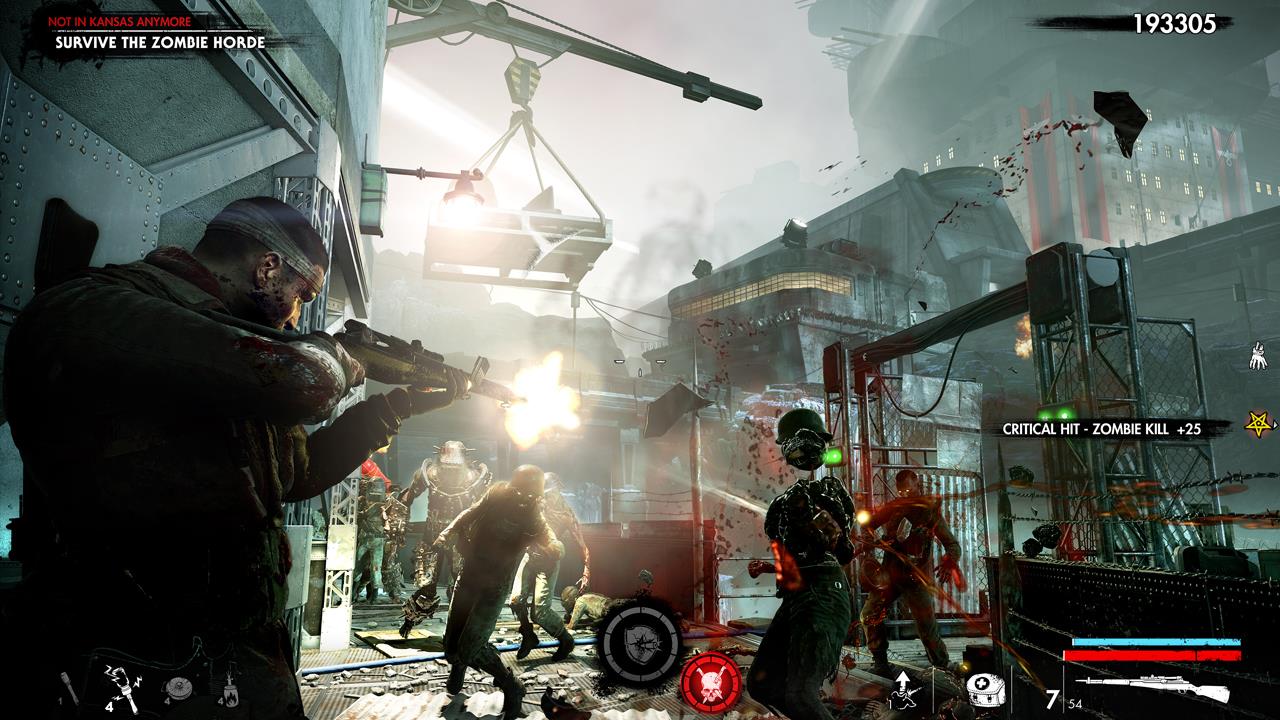 The story was, in my opinion, one of the weakest parts of the game. Each chapter plays out as a series of three or four levels, culminating in a big fight at the end. My main problem is that the majority of the chapters in the game felt way too similar. Sure, the locations change, but every chapter just boiled down to the same formulaic path. Without that sense of natural progression, Zombie Army 4 ends up forcing the player to solve the same problem over and over.

To be fair, I don't generally have high expectations of stories rooted in zombie lore. But realistically, Zombie Army 4 doesn't do anything to challenge those expectations, sweeping the player from one locale to the next, each one feeling less inspired than the last. A big part of this was the distinct lack of the big culminating events the previous games had. More often than not, those climax events at the end of each chapter tended to go out with a whimper rather than a bang.

Sometimes it's hard to get past a story that doesn't quite click. I'll admit that Zombie Army 4 is not one of those games. The way I found best to deal with the weaker story is to tackle it with other people. This game is fun when you play it alone, but it's an absolute treat when you play it with buds. The increased spawns better fill the levels and create a more frantic pace of play, and nothing can match trying to line up shots while your teammates constantly strafe in front of your scope.

Zombie Army 4 feels like an old friend you're reconnecting with after a few years. Even though it's similar to its predecessors, the game has been refined into something that holds greater mass appeal. Weapon upgrading, fresh enemy design, and a packed progression system give players a reason to keep coming back. The core gameplay loop is even better more when tackled in co-op, yielding some hilarious and action-packed adventures. Despite the good, the game's core issues arise from a bland campaign that lacks the impressive set pieces and locations from the previous iterations.