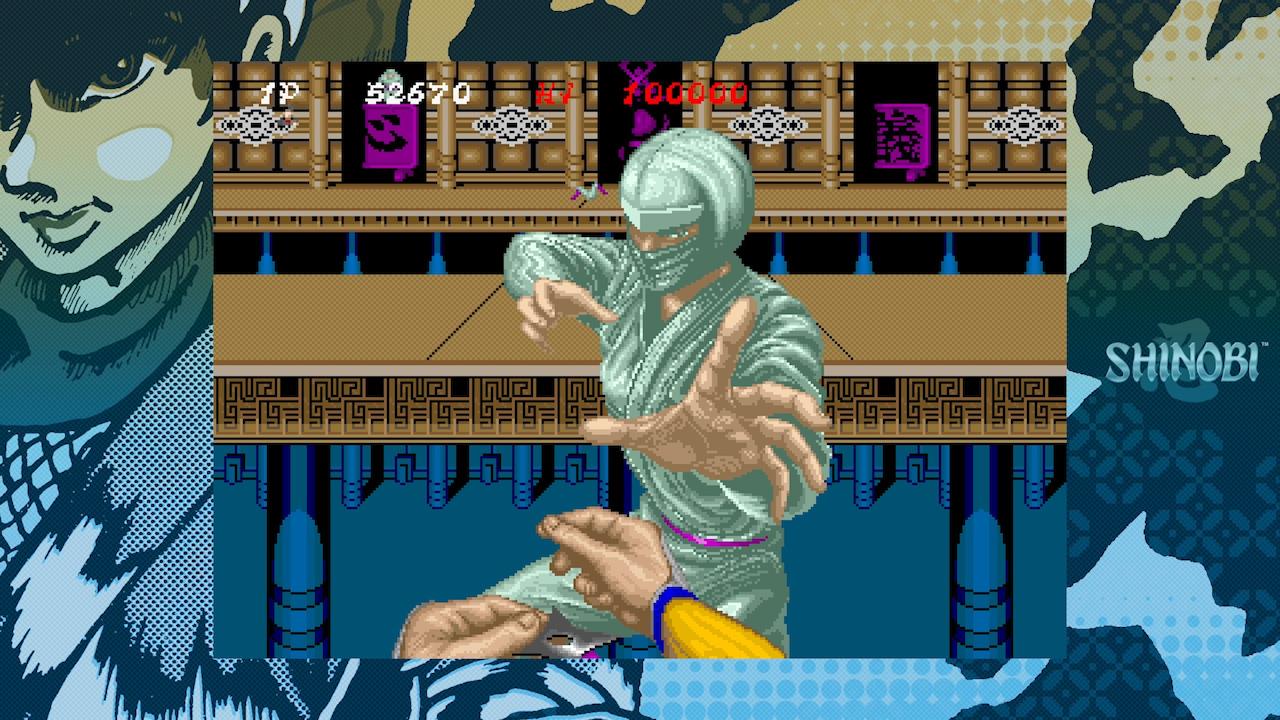 Back in 1996 Sega released a series on the Sega Saturn called Sega Ages. Each volume contained anywhere from one to four previously released games in Japan. While the series was mostly exclusive to Japan, the U.S. and Europe did get one volume with four games on it. The next series, Sega Ages 2500, was released for the PlayStation 2 in Japan between 2003 and 2008 and focused on remaking a lot of their older games with updated 3D visuals, though nine of those games were packaged together as the Sega Classics Collection in the U.S. and Europe. Then came Sega Ages Online on the PS3 throughout 2012 with five of the 10 volumes releasing worldwide under the title Sega Vintage Collection and also launching on the Xbox 360. Finally we reach the topic of today’s review: The Sega Ages series on the Nintendo Switch, where Genesis, Master System, and Arcade games would be released as individual titles on the Switch’s eShop worldwide. Today I’m going to take a look at one of those titles: the arcade version of Shinobi.

You play as Joe Musashi and play through five missions to rescue the kidnapped children of your ninja clan who were taken by a criminal organization called Zeed. That’s pretty much the plot, though this is a port of the arcade game and some arcade games were kind of thin on plot; they let the gameplay itself do the work, so to speak. Shinobi consists of five missions with four stages each (three in the first mission), the final stage consisting of a boss fight. In each non-boss stage you must rescue a certain number of children before you can proceed to the next stage. Naturally the stage is filled with enemies but Joe isn’t completely defenseless. His primary method of attack are shurikens that he can throw an endless supply of at a rapid pace. These will take out most enemies they hit but many can block them with their swords. Speaking of which, if you get in close you can slash at an enemy with your sword, defeating some enemies that can normally block your shurikens. Finally you have a screen-clearing Ninjutsu attack that you have once per level/life. This is best to save in very dire situations because this game can be absolutely brutal.

If you’ve never played Shinobi before you’re in for a rough ride. By default you start out with three lives on Normal difficulty, but you can change either of those options before you start the game. Normally one hit will kill you outright, but if you just hit the enemy themselves and not their weapons or projectiles, you’ll just bounce right off of them. Even still after the first couple of missions the enemies begin to appear in the most inopportune of locations and have the tendency to surround you. Thankfully there are a couple of options in the Sega Ages version to aid you. The first of these is a rewind feature which, I’m not going to lie, I used extensively to get through the game. By holding either ZL or ZR you can rewind up to the last 12 in-game seconds of gameplay (or about eight seconds in real time). If you’re not an expert at the game this is incredibly useful as there are a lot of times where you’ll find yourself surrounded by enemies appearing out of thin air. 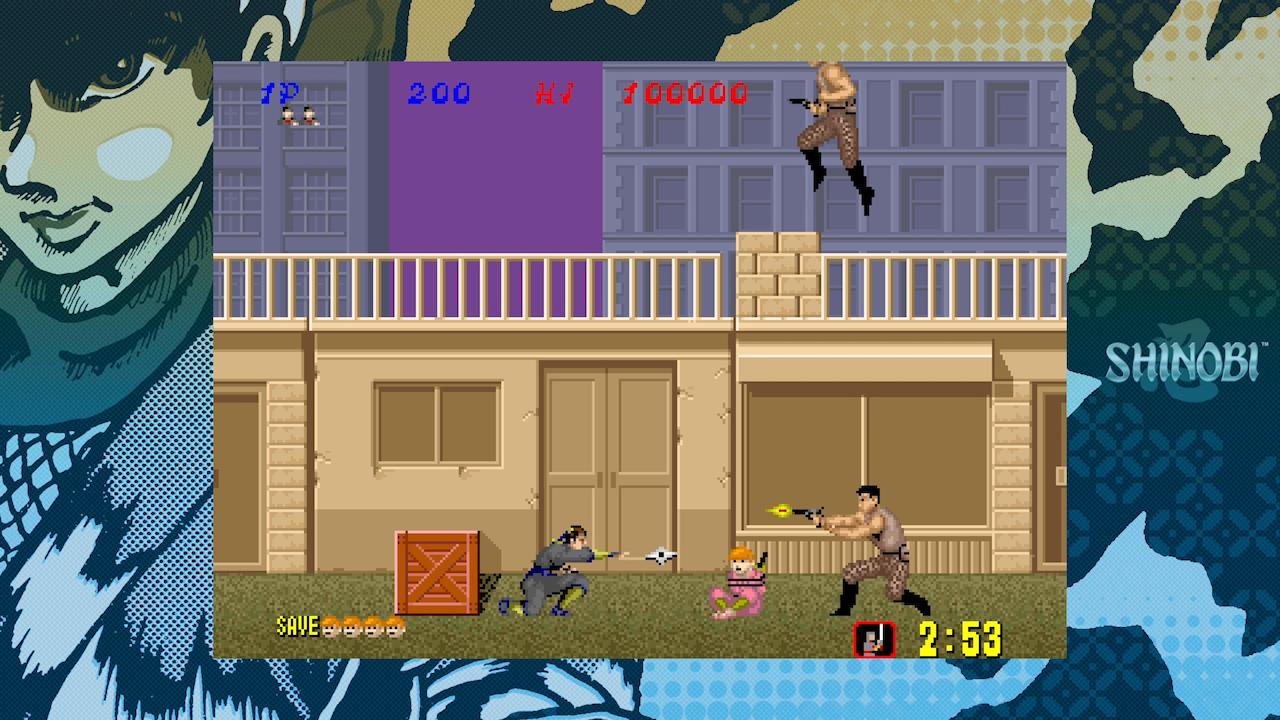 Even then you might find yourself really getting tired of spending half of the game holding the ZL and ZR buttons. That’s where the other useful feature comes into play: save states. Sega Ages: Shinobi gives you 10 save state slots to use which is pretty generous. However, after finally finishing the game using the rewind feature, I went back through (still on Normal difficulty to keep my sanity in check) and started using save states now and then to work on some of the more difficult sections in each stage. While the rewind feature is nice to use, it is limited with how far back you can rewind. Plus even when I survive a difficult area I’d rather go back and practice it a few more times until I can pass by it without any issues. In addition to the save states and rewind features, there’s also a Sega Ages mode you can choose from on the game’s main menu that will let you start with a white ninja outfit that basically gives you an extra hit point. When you get hit your outfit will turn red, and from there you’ll die in one more hit. 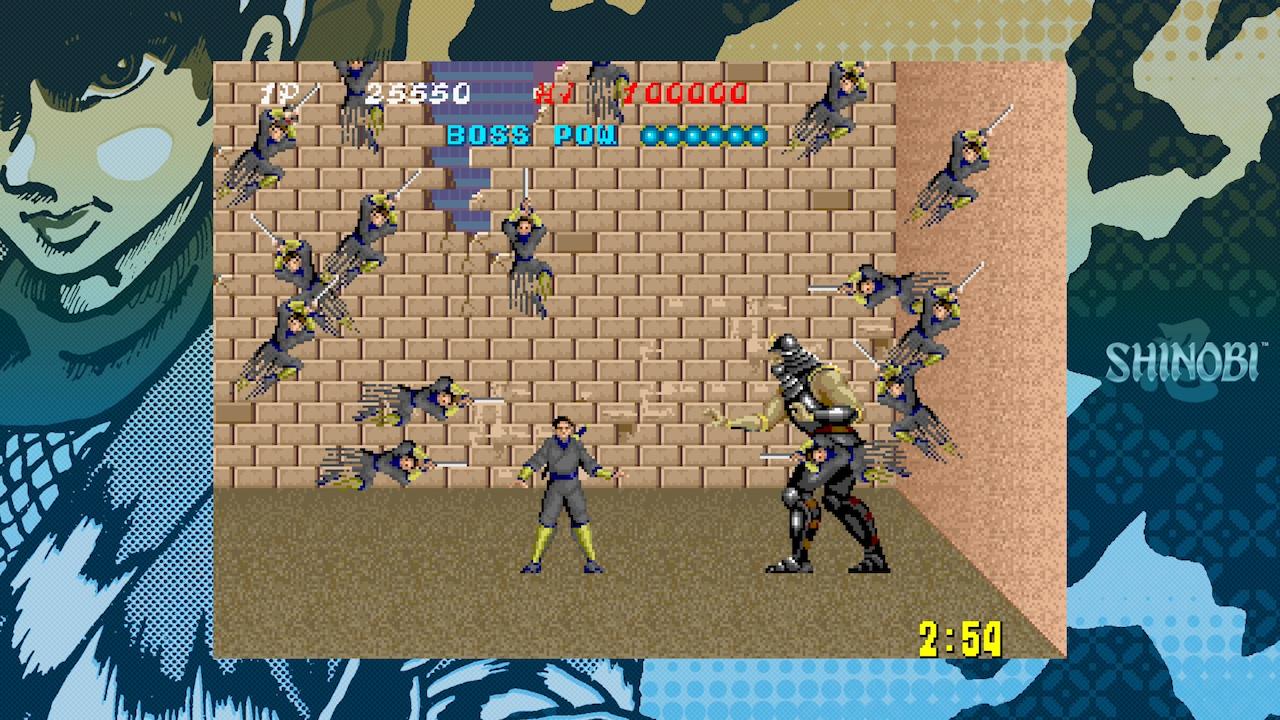 Now we come to probably the toughest part of writing this. For the most part I’m essentially reviewing a port of a game that was released over 30 years ago with a few additions. At the same time, though, it is reaching a new audience and the new features could be considered tailored to that new audience. That being said, Sega Ages: Shinobi is a great game after all these years. Arcade games could sometimes be on the short side but also be very difficult in order to keep you spending quarters in the hopes of making it to the end. When making a port of a game on a newer console that will potentially reach a new audience, however, that could also be a bit of a detriment. You could end up turning off potential newcomers by the game’s difficulty even though they technically aren’t spending any money in the game itself—just what it cost to purchase the game. 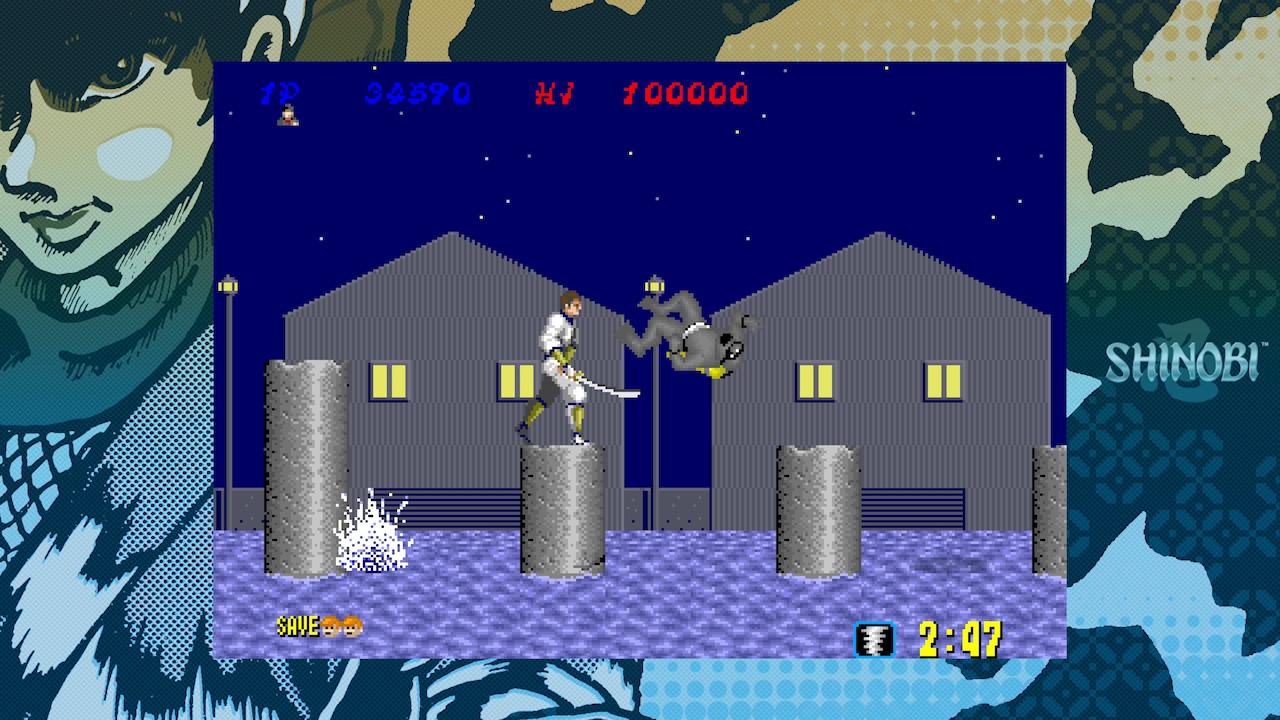 Would I recommend Shinobi to someone who has never played the game before? Honestly, I think I would. If it was a straight-up port with no additions I’d be a bit more hesitant, as players might think the game is too difficult even after changing the difficulty and number of lives. However, the additions of the rewind and save state features make it so a newer or less experienced player can pick up the game and take their time learning it. The stage select option is nice as it lets anyone go straight to any stage or boss and practice it without having to slog through the rest of the game. On top of that if you are an experienced player, you can just not use the features at all. In fact, the game has rankings based on your score and the rankings differ for the normal and Sega Ages version and you can turn off the rewind feature for rankings as well. If you’re a fan of the game or are just curious about checking it out, it’s definitely worth the eight dollars, but just be prepared for a pretty difficult experience if you’re a newcomer.

Sega Ages: Shinobi is still a great game more than 30 years after its initial release—and it's still just as difficult. It takes a lot of skill to progress beyond the first couple of missions. Newer players are given a couple of tools to help them, namely save states and a rewind feature, while expert players will find the same game they enjoyed all those years ago. Whether you're an experienced ninja or you're checking the game out for the first time, Shinobi is a great addition to the Sega Ages library.