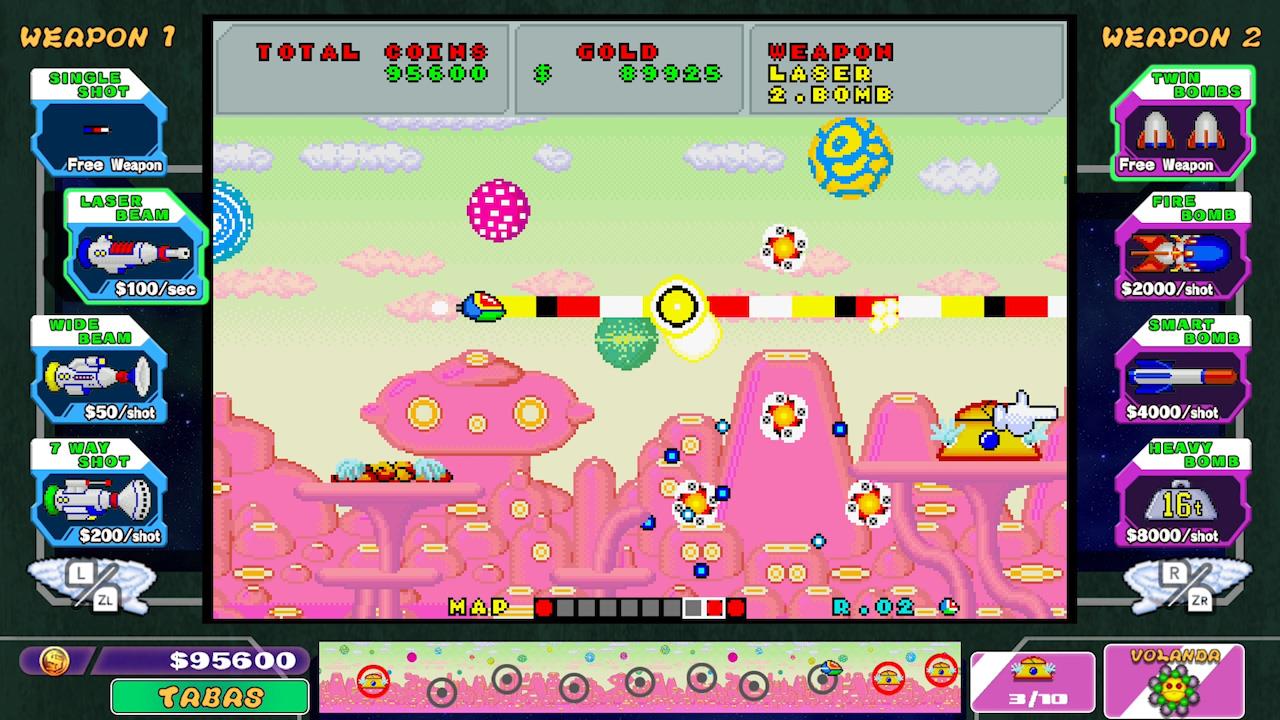 Recently I’ve had the opportunity to check out a couple of games in the Switch’s Sega Ages library: Shinobi and Fantasy Zone. My time with Shinobi before the Switch port was minimal as it was a game I had played briefly in the past but was never that good at it, and with the difficulty of Shinobi games in general it’s not too surprising. Shinobi takes a lot of skill to even progress past the first couple of missions and it can be an intense experience, especially for someone who has never played the game before. The other game, Fantasy Zone, is a bit more relaxing of an experience, namely because you don’t have ninjas appearing out of thin air, but I digress. That being said, let’s take a look at Sega Ages: Fantasy Zone on the Nintendo Switch. 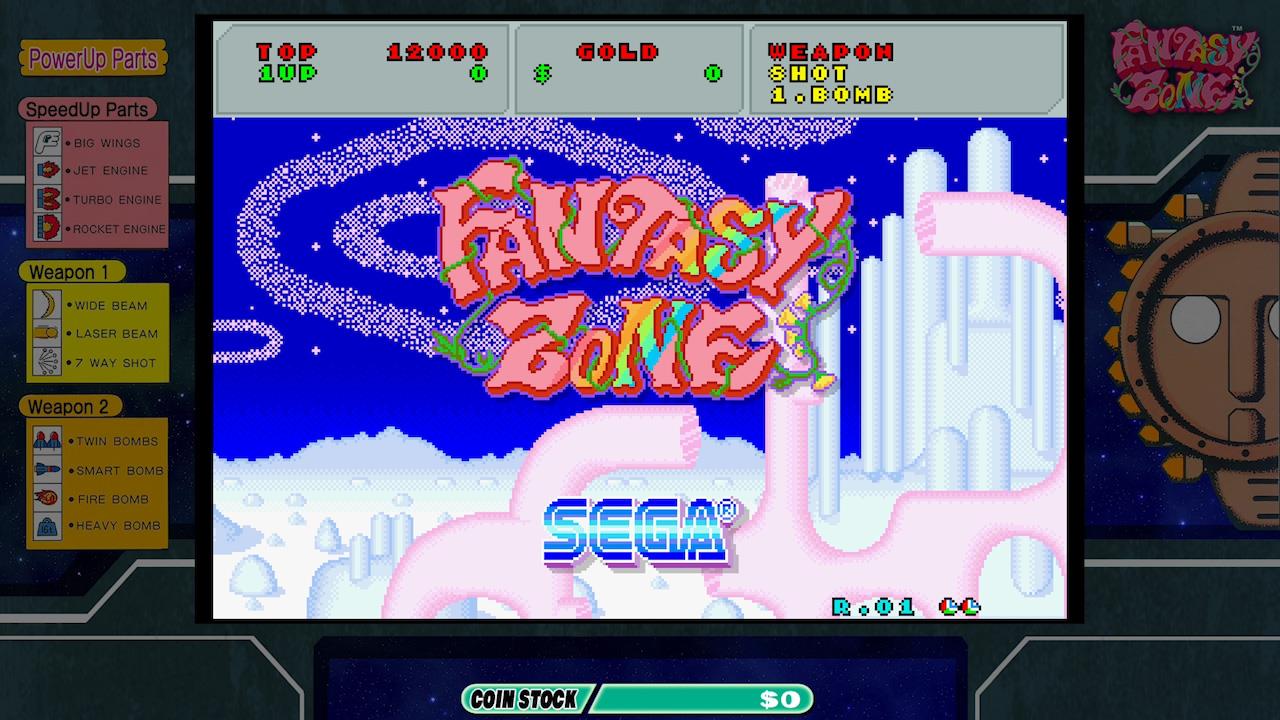 Fantasy Zone was released in arcades in 1986 and was ported to several home computers and consoles over the next three decades. Players control a sentiment ship named Opa-Opa through eight planets in the titular Fantasy Zone, defeat 10 bases in each stage, then take on the stage's boss (this is different for the eighth stage). You can move Opa-Opa in any direction  and while the screen does move vertically a bit, most of the movement is from left to right. At the bottom of the screen you’ll see a number of red dots indicating which sections of the stage still has a base to eliminate, and below that is a small map of the stage that shows the rough vertical position of you and the remaining bases. After taking out all 10 bases the stage boss will appear shortly thereafter and taking it down will let you progress to the next stage. 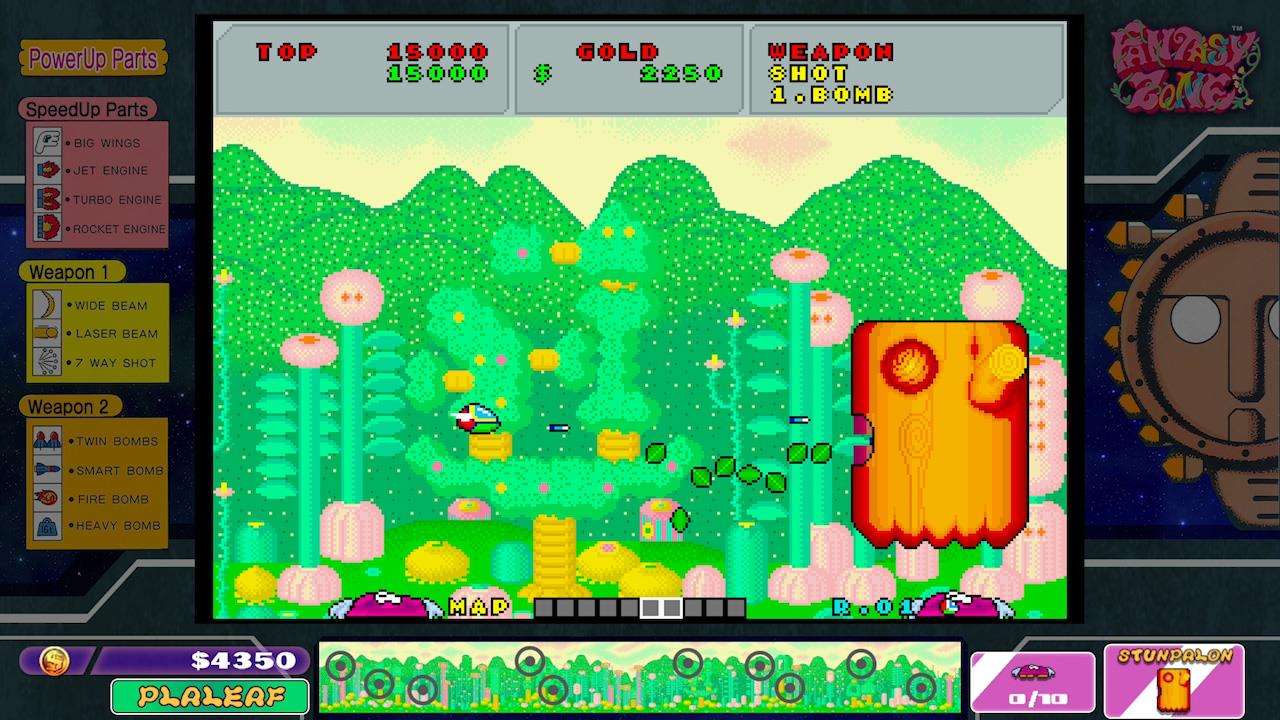 You start the game with a simple bomb you can drop on the ground and a primary weapon you can fire straight ahead. Defeating enemies, bases, and bosses will make them drop coins you can collect, and every now and then a red balloon that says “Shop” will float by. Touching the balloon will take you to a shop where you can spend the coins you collected on various upgrades to your primary weapon, bombs, and your engine. You can only use one upgrade for each part at a time and some of the weapons are timed. Once the time runs out you’ll go back to the default weapon, but engine upgrades are “permanent.” I put that in quotes because while engine upgrades aren’t timed, losing a life will cause you to lose all upgrades, including all of your weapon and bomb upgrades as well. In addition, as you purchase an upgrade the price of it will go up the next time you go to purchase it (i.e. if you purchase a bomb upgrade and you die, buying the same bomb upgrade again will cost more coins). In that sense it’s all about knowing what to buy and when, and when to hold onto your coins for later.

The Sega Ages version that I looked at has a couple of other modes and options to check out. For the default game you can turn on a Round Select option. However, instead of letting you pick from any stage in the game, you can pick from any stage you’ve already played. In other words if you’ve made it as far as stage five, you can choose to begin on stages one through five. This has kind of a risk-versus-reward factor as you can start later in the stage, but you won’t have as many coins built up to spend on upgrades. For that there’s another feature for the game that’s a nice addition. Whenever you collect coins they’re added to a grand running total throughout all of your runs through the game. Even when you spend money in the shop the grand total will never decrease. If you choose to play with the Round Select option turned on, you can take some of that banked money to start the game with to give you a bit of an edge, but that comes with its own drawback. There are extra options to unlock, such as the extra bosses from the Sega Master System version of the game, that require a grand total of 250,000, 500,000, and 1,000,000 coins. It’s really easy to build up your coin stock as you don’t have to even finish a game or get a game over for the coins you collect to be added to your total. 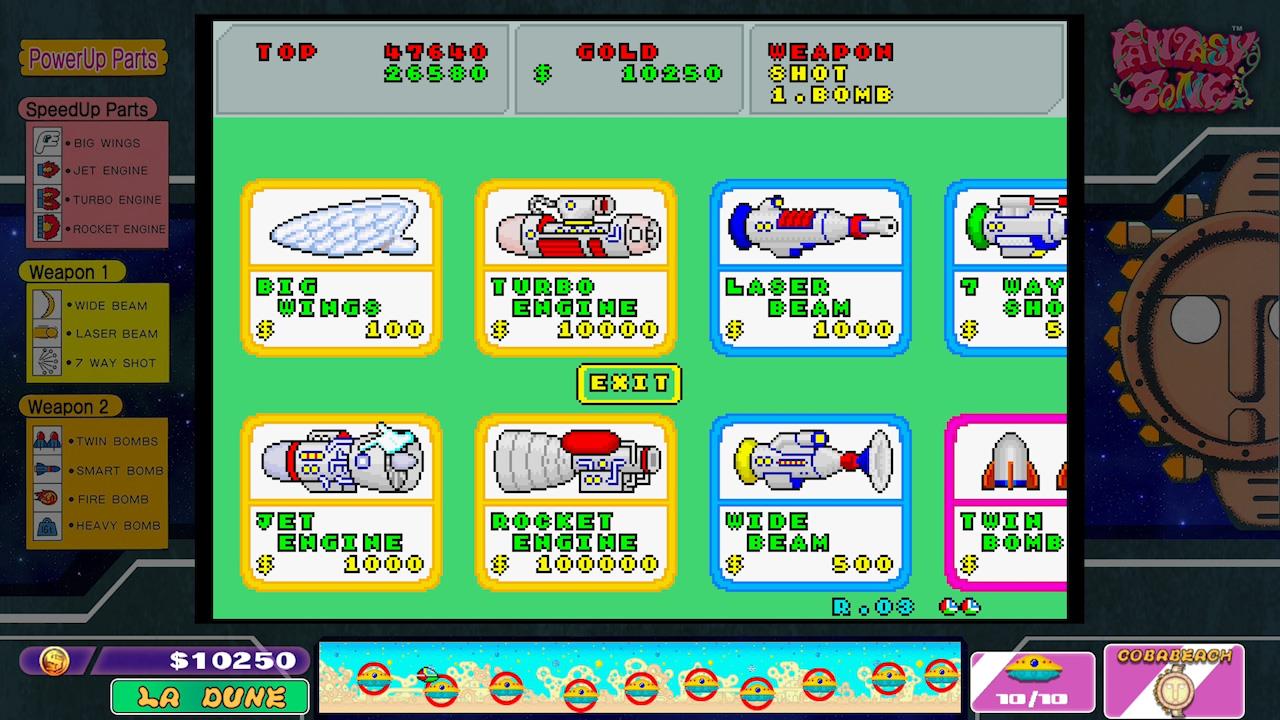 The other two modes are Upa-Upa Mode and Time Attack Mode. Upa-Upa mode is an interesting take on how the weapon systems work. Instead of going into a shop, spending coins to buy a new weapon, and then only having it for a limited amount of time or if you die before that time runs out, now you can select any special weapon you wish, but it costs money to fire it. You can switch between the weapons with L and R and as you fire, your coins will go down a set amount per second fired depending on the weapon. This is nice as it wasn’t too often in my normal playthroughs where I’d get a shop to appear just before a boss did so I’d almost always have to go in with the regular bullets. Saving up your coins until you really need a special weapon and being able to swap to it whenever you want really helps. You also have a save state system you can utilize though I don’t find it as useful in Fantasy Zone as I did in other games such as Shinobi. Then again with Fantasy Zone it may be a bit difficult in the later stages to get a brief moment where you can create a save state where you aren’t surrounded by enemy projectiles. 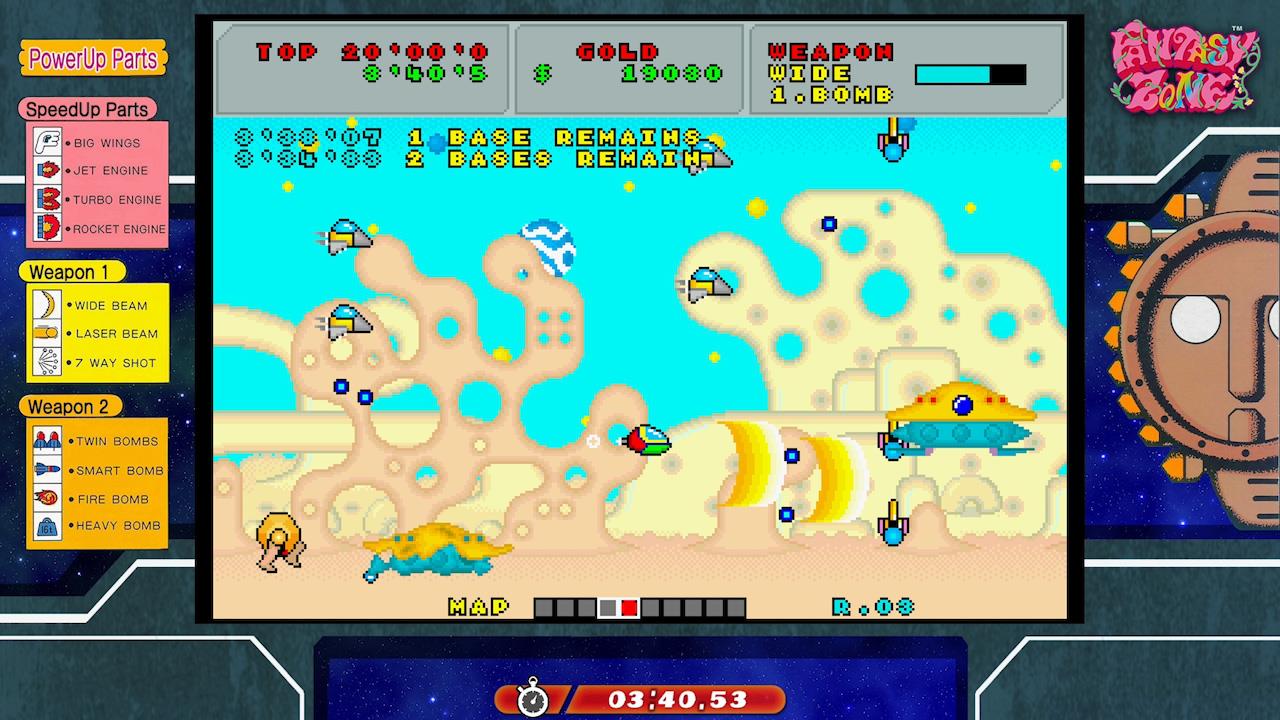 Time Attack Mode is kind of what it says on the tin: simply clear the game as fast as you can. However, there are a couple of differences between Time Attack and the other modes. For starters you have infinite lives. While the timer does keep going during your death animation and as you start your next life, you don’t seem to get a game over in this mode unless you quit entirely. In addition when you reach a boss and die, you’ll get sent to the shop to spend any coins you wish to spend before facing the boss again. This is great because as stated above it wasn’t too often in my normal playthroughs that I’d get the shop to appear just before a boss so I’d never have a special weapon going into one. You don’t have to worry about scoring points, so just defeat enemies, collect coins, defeat the boss, and move on. 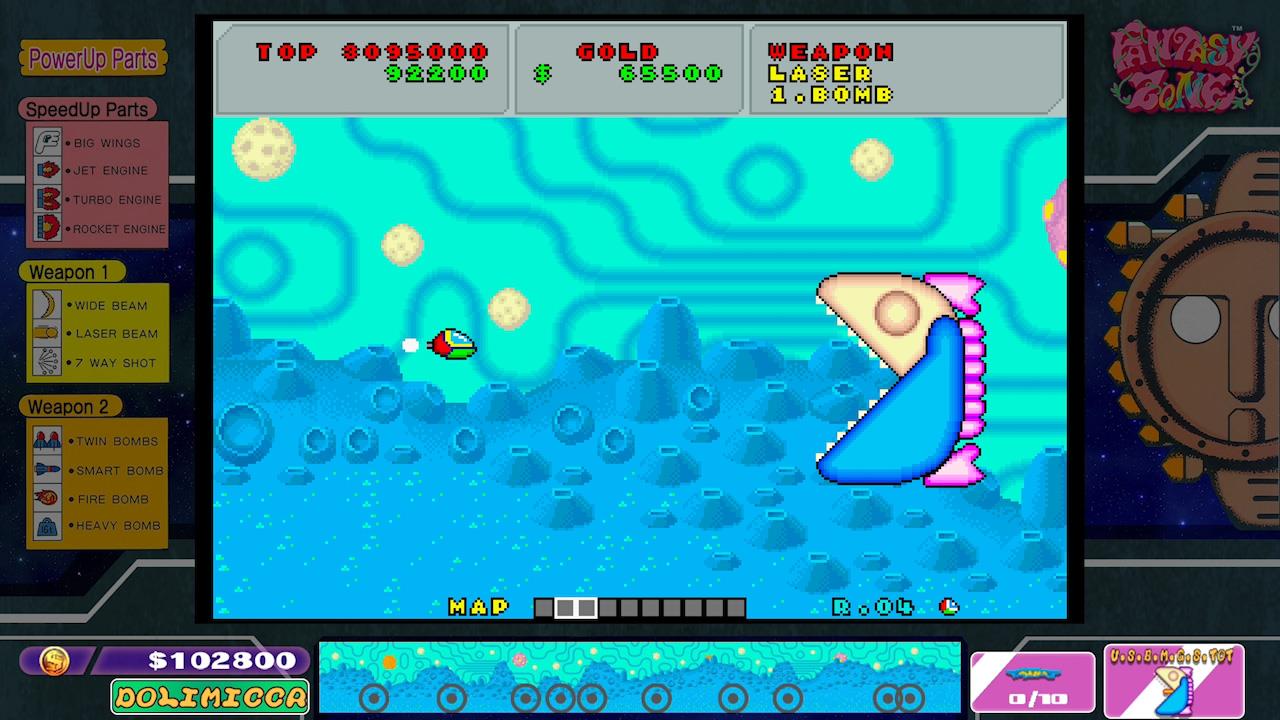 Fantasy Zone is a game that starts out simple enough but increases the difficulty naturally over the course of the game’s eight stages. When first starting out I was having trouble with the third stage but after a while I was clearing it without too many issues. If you can clear the first couple of stages without spending too many coins you’ll have a good amount for the third stage to purchase a couple of upgrades. Just remember that dying makes you lose all of them so spend wisely. While a game like Shinobi tends to be fast paced and requires a lot of skill from the get-go, Fantasy Zone eases you into the game and gradually gets more difficult as the game progresses. For another contrast, Shinobi’s extra modes and options help make the game easier for newer players while Fantasy Zone’s extra options are a bit more tailored for once you become more familiar and experienced with the game. If you’re looking for a nice fun arcade game to sit back and relax with, Fantasy Zone is definitely worth picking up.

Fantasy Zone was a lot of fun when I first played it a long time ago and it's still a lot of fun today. While the save states aren't quite as useful as with other games in the Sega Ages library, the Upa-Upa and Time Attack Modes do add some variety to the gameplay for players looking to change things up a bit from the normal mode. If you're looking for a fun simple shooter that has a nice difficulty curve and a bit of strategy in how you play (namely in how you spend your coins), Fantasy Zone is worth checking out.