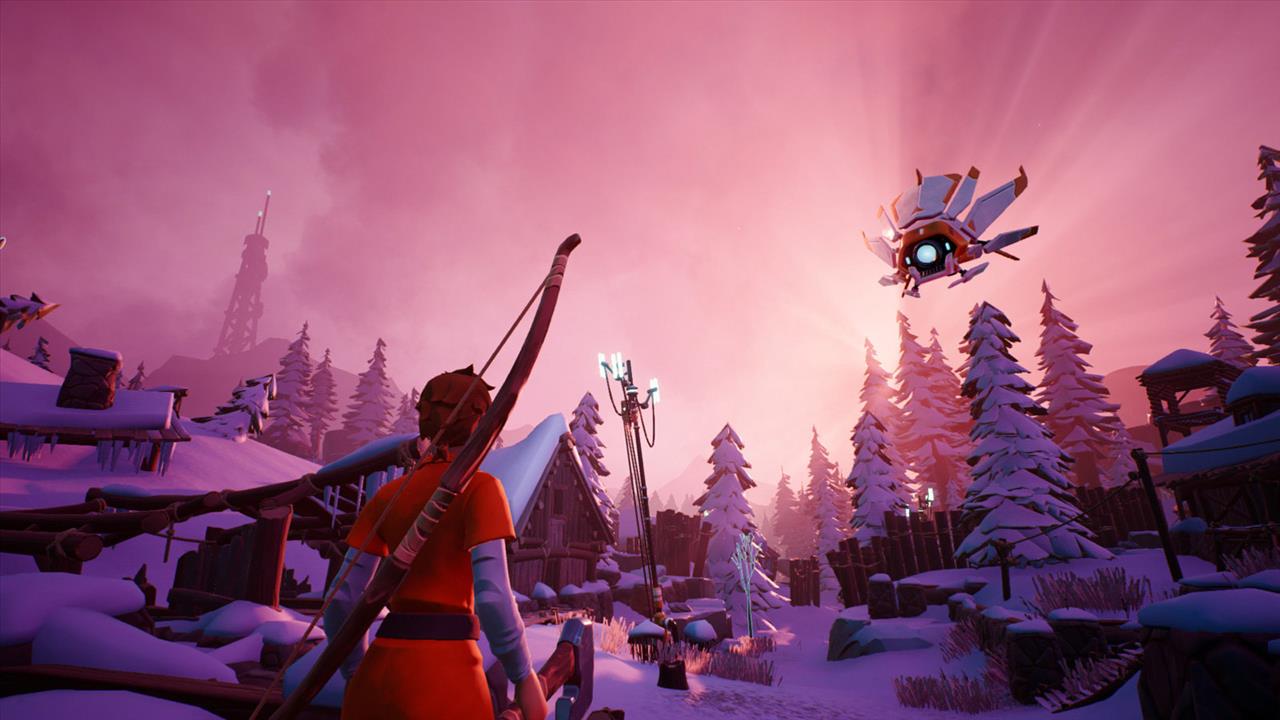 I am not a huge fan of battle royale games. I typically download them, play a couple of matches, and then clear them from my hard drive to make room for something that I really want to play. I don’t like chatty people howling into their microphones, and I have no time for games where I can get sniped from across the map by someone I can’t even see. I fumbled around for a couple of hours with Fortnite, and I ran some rounds of Apex Legends with my teenage sons when it dropped, but for the most part I’ve been waiting for someone to come up with a battle royale title that appealed to me—the creeper hanging at the edge of the map waiting for everyone else to die.

Enter Scavengers Studio, and their 2018 release Darwin Project, just released on PlayStation 4 in January. These folks have stripped away all of the junk that I can’t stand about battle royale games, and replaced it with something that actually feels fresh and original. Rather than simply changing the setting, Scavengers has altered the core mechanics of the genre. As a result, Darwin Project is a game that I will happily sit and play for hours on end—particularly since the community seems to be made up of fun-loving adults instead of shrieking children.

Darwin Project takes place in a much smaller arena than other battle royale titles, which works out great, because you only spawn into each instance with nine other players. This smaller player count leads to quicker matches that feel more intense and intimate; when a player runs away from you, you will remember them when they either die or kill you later. 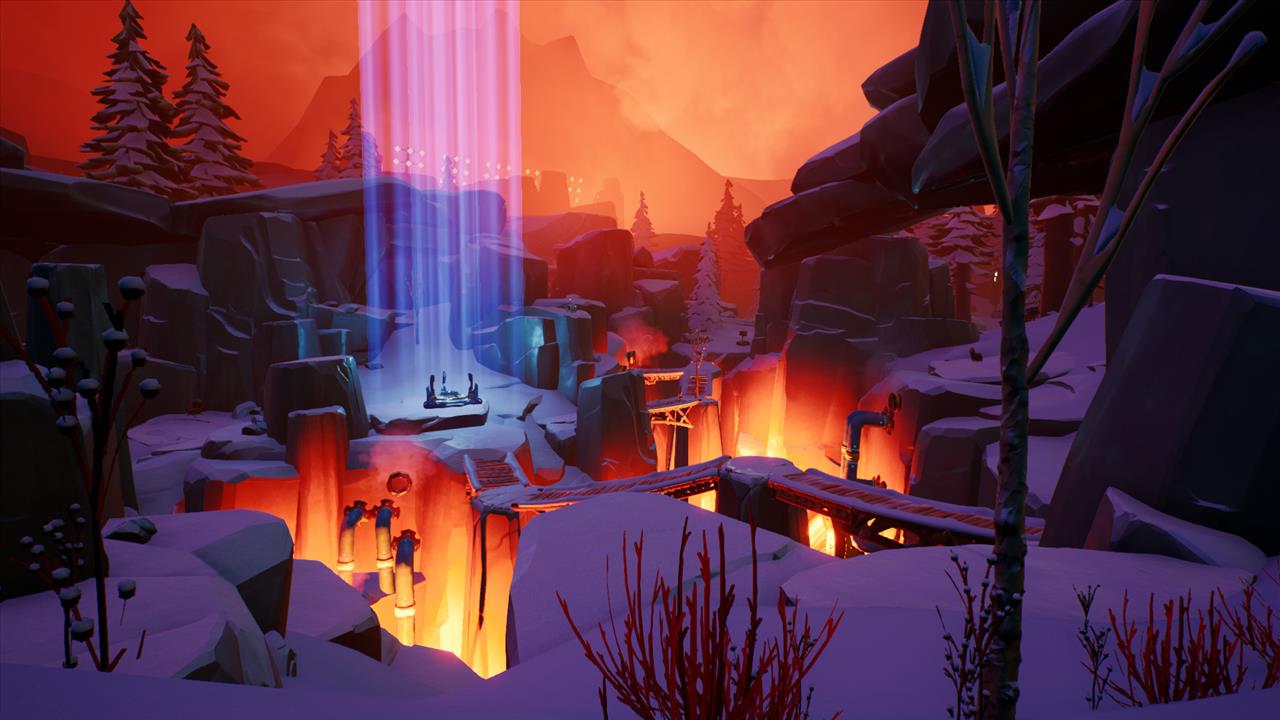 One of the hooks of Darwin Project is that there is an element of survival that players must constantly be attending to. The entire arena is chilled to sub-zero temperatures, and players’ core temp is constantly, slowly depleting. Ignore the creeping cold at your own peril. I’ve lost more than one match by freezing to death at the last minute. To combat the cold, players can build small fires to warm themselves by, but you must chop wood to do so. As wood is also used to carve arrows, the choice between warmth and ammo offers a light push and pull until you have enough resources to indulge yourself.

In addition to your bow (which is somewhat difficult to aim in the heat of battle), each player is armed with an axe. And that’s it as far as weapons go. No grenades, no sniper rifles, no handguns. Most matches come down to two people whacking away at each other with axes while the cold crashes down around them. It’s intense, and crazy fun. 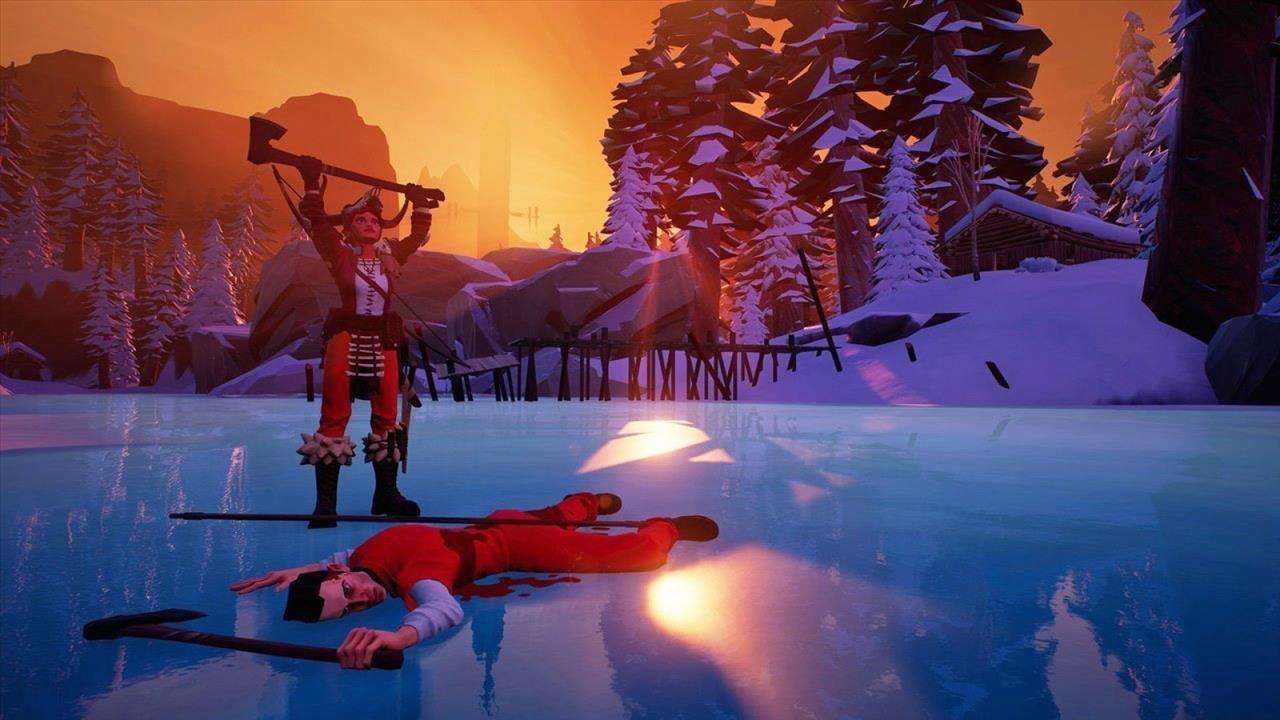 Players can choose one of three classes at the start of a match, each of which levels independently of the others. Levels are fairly meaningless; all that is gained is a cosmetic item for each level achieved. Though I was delighted by my sweet yellow pants when I got them, I haven’t exactly been trying to jam though levels. I’m far more interested in developing a decent strategy that will let me win this thing. I’ve been number two more times than I can count, but number one eludes me. It’s sad.

But I’ve digressed. What was I talking about? The three classes. Right.

One class gives players the ability to fly short distances, launching themselves straight into the air when danger looms. Another class equips players with a grappling hook, allowing them to zip across chasms and close gaps between them and the enemy almost instantly (the grappling hook/axe combo can be devastating in the right hands). But my favorite is the headhunter drone, which will zip about grabbing resources from a distance. Very handy when a large part of the game is gathering everything you can get your hands on.

In addition to wood, players also gather “Darwinium,” a generic resource that allows them to build and deploy secondary powers. For example, when playing the headhunter class, players can choose two from the three supplementary abilities: temporary invisibility, a radar that pings enemies and goodies, and a turret that will shoot at enemies. Darwinium can also be used to build traps—stuff like land mines and spike traps, which can be laid about the environment to wait for wayward enemies to trigger them. 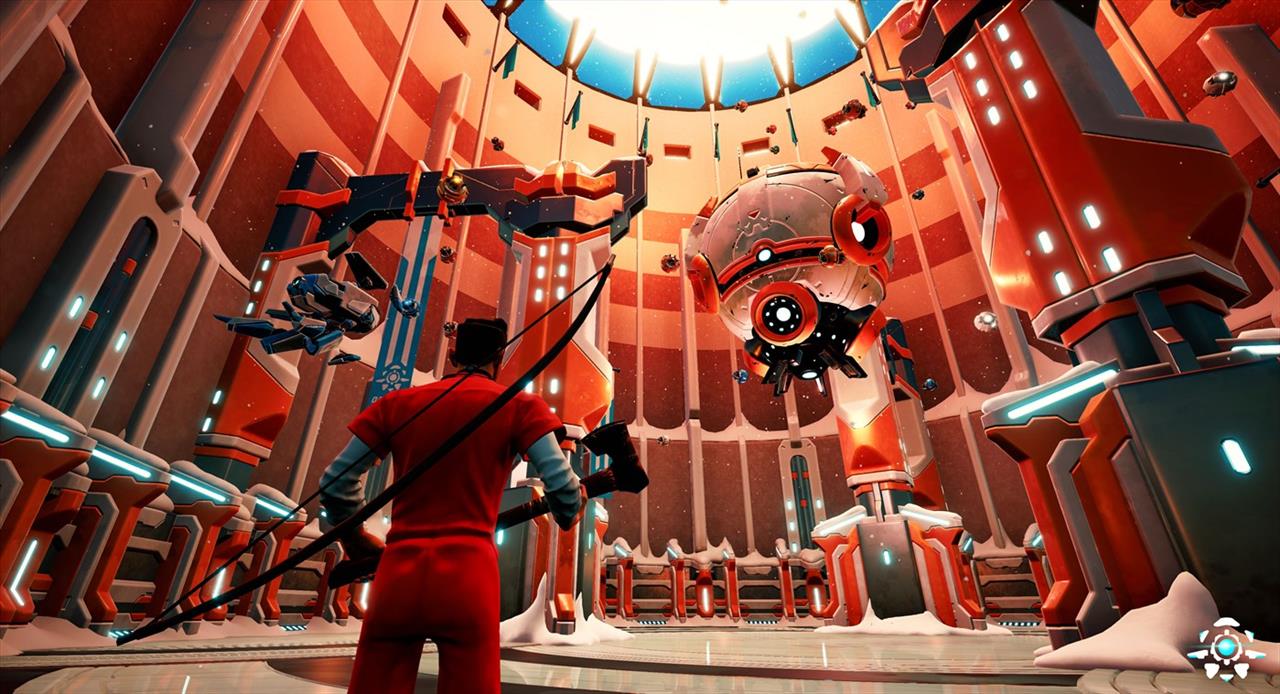 The map is divided into seven sectors, which are closed off one by one, shrinking the map in great swaths. If you are caught in a closing sector, you get one minute to hightail it out of there, or risk a quick freezing death.

In addition to the closing off of large chunks of the map, players must also deal with the “Director,” an eleventh player that can either help or hinder the situation, depending on their level of chaotic mischief. Players acting as Director (the option unlocks once you hit level five for any of the classes) can cause any sort of ruckus. They can gift resources, dropping Darwinum onto a map, or wood directly into a player’s inventory. They can also absolutely wreck shop. In one match I was playing with four sectors left open, the Director chose to start closing two sectors at once, dropping a nuke into a third, sending everyone scrambling to the last safe sector to duke it out. 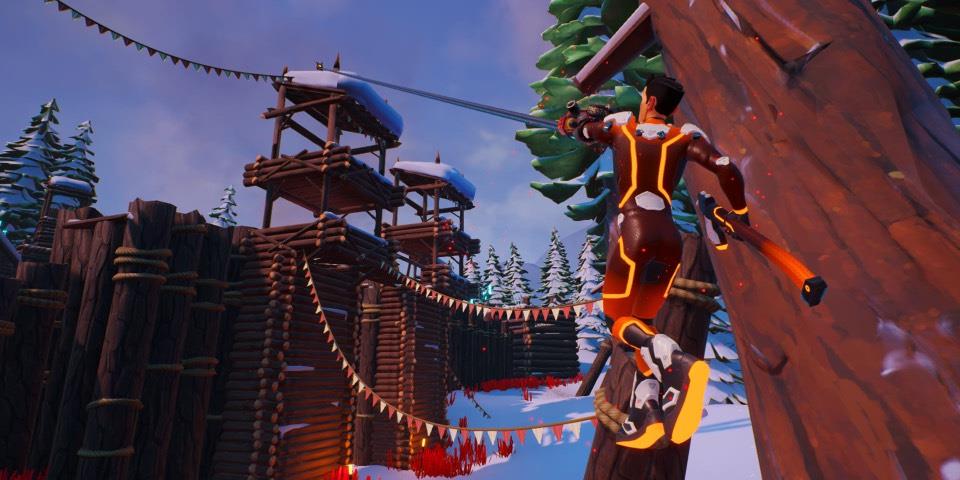 This level of chaos keeps players on their toes, and also help to make each match feel fresh and intense. As a camper, I have been actively called out by the director while trying to hide in a cabin, his voice booming out over the entire map while mocking me with taunts like, “Are you sure you’re playing the right game? You’ll never get any kills hiding in there! Yes, I’m talking to you!”

Indeed, the entire community playing Darwin Project seems to be pretty devoted to having a good time. Most players crack jokes when they meet up with each other in-game, offering a “GG” to opponents after viciously murdering them with an axe. It is this level of interaction that makes Darwin Project feel so unique among its peers, as players are forced to get down and dirty with opponents if they want to survive. It’s almost always all coming down to blood spattered in the snow, but the community’s good attitude keeps the game feeling light and cartoonish. 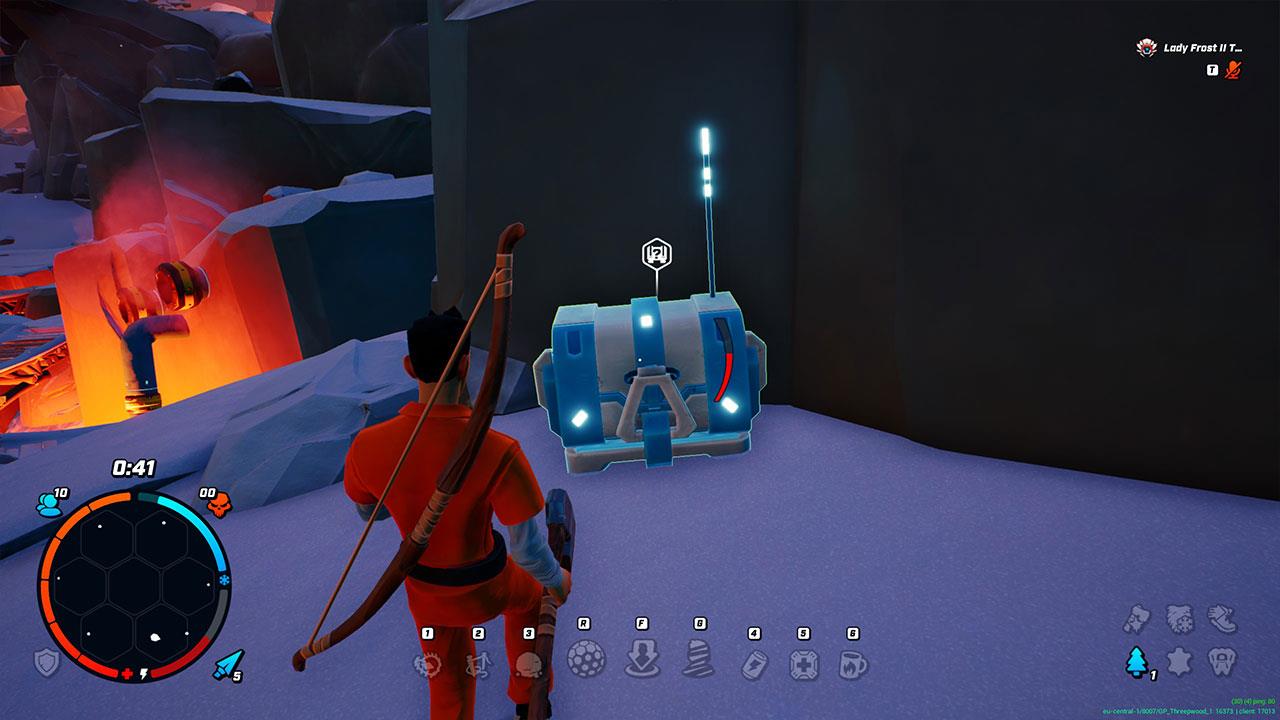 Darwin Project is a game for people that want to play a battle royale, but don’t want to play the big-name titles. In many ways, it feels like a respite for the rest of us, a place for people that like the idea of BR games, but rejected them for one reason or another. The mechanics feel unique, but are simple to learn and fun to use. I was surprised how much I enjoyed Darwin Project, and how often I’ve been going back to it. This is the good stuff, and I hope people stick with it after this initial post-launch honeymoon. Communities this good should stick together.

Darwin Project takes the battle royale formula and turns it on its ear with simple survival mechanics and visceral axe combat. While hunting down your peers, be sure to keep warm, or else you will freeze to death all by yourself. With a tight map, fun and unique classes, and little in the way of intrusive monetization, Darwin Project feels fresh in a quickly crowding market. A battle royale game for those that didn't get hooked on the big titles, Darwin Project is an enjoyable competition with a great community.