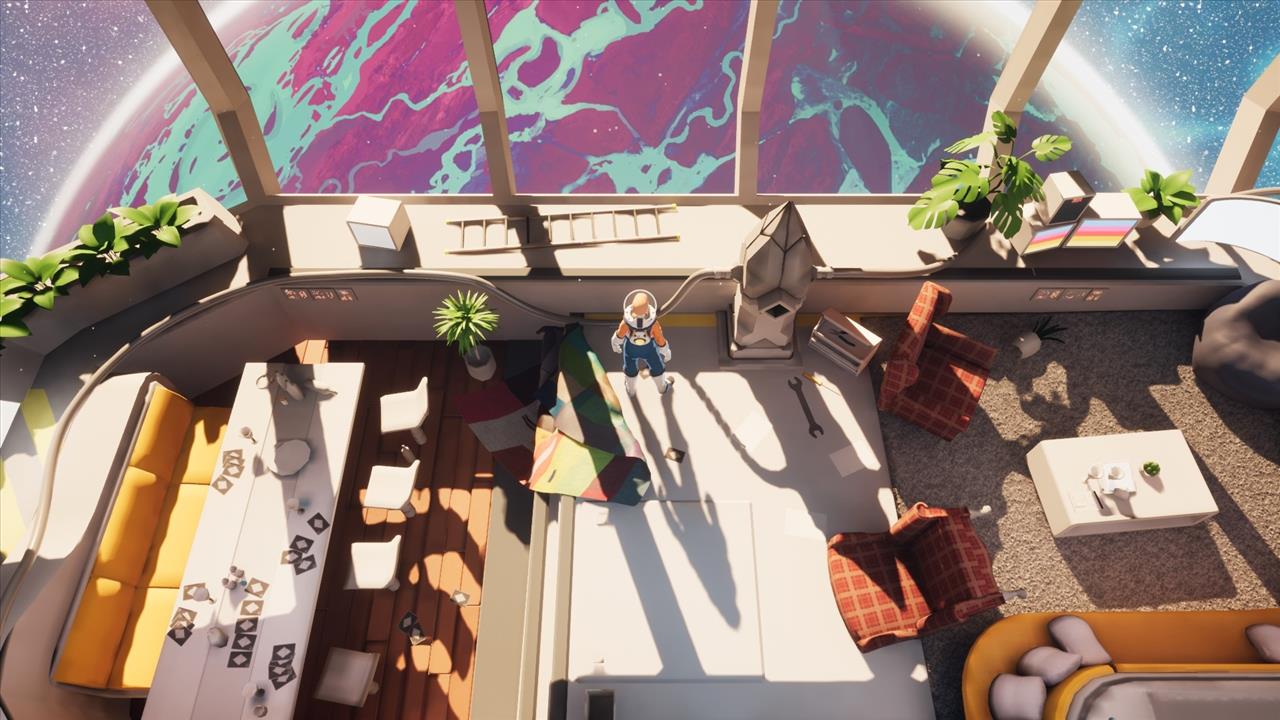 You’re a red-headed, hipster-bearded, spacesuit overalls-wearing puzzle solver. That’s one half of you, anyway. The other half is someone I like to call Little Light Bulb Buddy. That’s not its real name, but that’s whose tiny white tennis shoes you’ll be running around in mostly. A small incandescent bulb with warmly blinking eyes and a square mouth, stringing along a bright line of light bulb filament behind it.

Hipster Beard, with his sloped shoulders and silent-protagonist speech patterns, immediately finds himself aboard the Alabaster, a seemingly abandoned ship floating high over an unnamed planet. But no, it appears the Alabaster is not abandoned. The captain is talking to you over a PA system. The captain sounds glad you’re here, but also nervous that you might be a weirdo. She’ll have to get over it. She’s trapped on the bridge and you’ve got somewhere in the neighborhood of 300 puzzles you can solve over the course of Filament, piecing together the crew’s story bit by bit.

At various pylons placed throughout the ship, you’re given sets of five puzzles. Hipster Beard places his hand inside an opening of these pylons, and then you’re transported to Little Light Bulb Buddy land. This is where most of the puzzles happen.

The puzzles build upon each other with various elements added for slowly increasing complexity, but the gist of it is this: you enter a square puzzle room from a tiny doorway with Little Light Bulb Buddy, you string your filament around light posts inside the puzzle room, you light up all the posts, you make your way back to the entrance/exit. You leave behind a Cat’s Cradle of string, beautiful once you’ve solved a puzzle, but heinous when you’re stumped.

More often than in, say, The Witness, the puzzles in Filament act more like an old fashioned game of Snake. Or a ropey round on Tron bikes.

At its most basic level, you have to be aware of a few things while working out these puzzles. One, you can’t cross your own filament line. Two, that’s about it. At first, of course, this will be a simple enough task. Just hit every single light post with the filament without cutting yourself off from the exit. As you progress to harder and harder puzzles, you’ll have to light up the posts in a particular order. More posts, more problems. There’s also, naturally going to be a shortest-route-possible solution to every one of these puzzles. But the developers are seemingly kind and leave room for at least a couple solutions. I think. The moment I solved a puzzle I moved on. I wasn’t sticking around long enough to see if I could even repeat what I’d just done, let alone come up with an entirely new route. I’m not that kind of gamer. 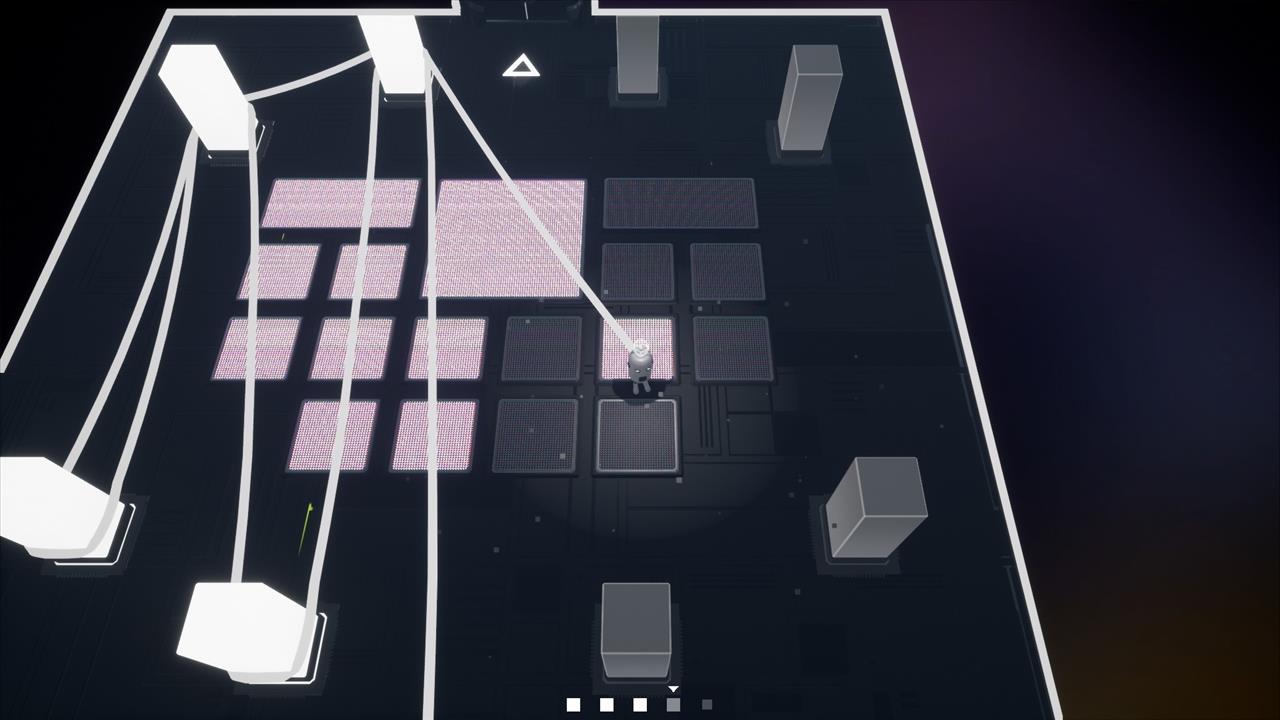 Filament immediately shows off its dry wit, along with its palette that’s as brightly colored as an Orange Julius, and its hopeful tune that tinkles out of a piano-laced soundtrack.

The filament-threaded puzzles introduce themselves abruptly, though not in any mean-spirited way, into this walkabout narrative puzzle game. I’m given just a taste of narration by a woman trapped on the bridge of this vessel I’ve just boarded. Then I’m given entirely too many more puzzles to solve, back to back, before I get to hear her voice again. The game has only just begun and I already feel like the story-to-puzzle ratio could use some rebalancing.

I had to give up on one set of five puzzles one night. The last puzzle just wasn’t going to reveal itself to me in this setting. That’s fine. I know how it goes with puzzle games. Taking a break from a seemingly unsolvable puzzle and then coming back at a later time to instantly solve it is, to be honest, one of the hallmarks of puzzle design. It simultaneously makes you say, “Duh,” and “Aha!” Except Filament didn’t make it (wildy) apparent that I could start right back up on puzzle three of five, or four of five. It sort of sits you right back at puzzle one of five and will let you start all the way back there if you let it. 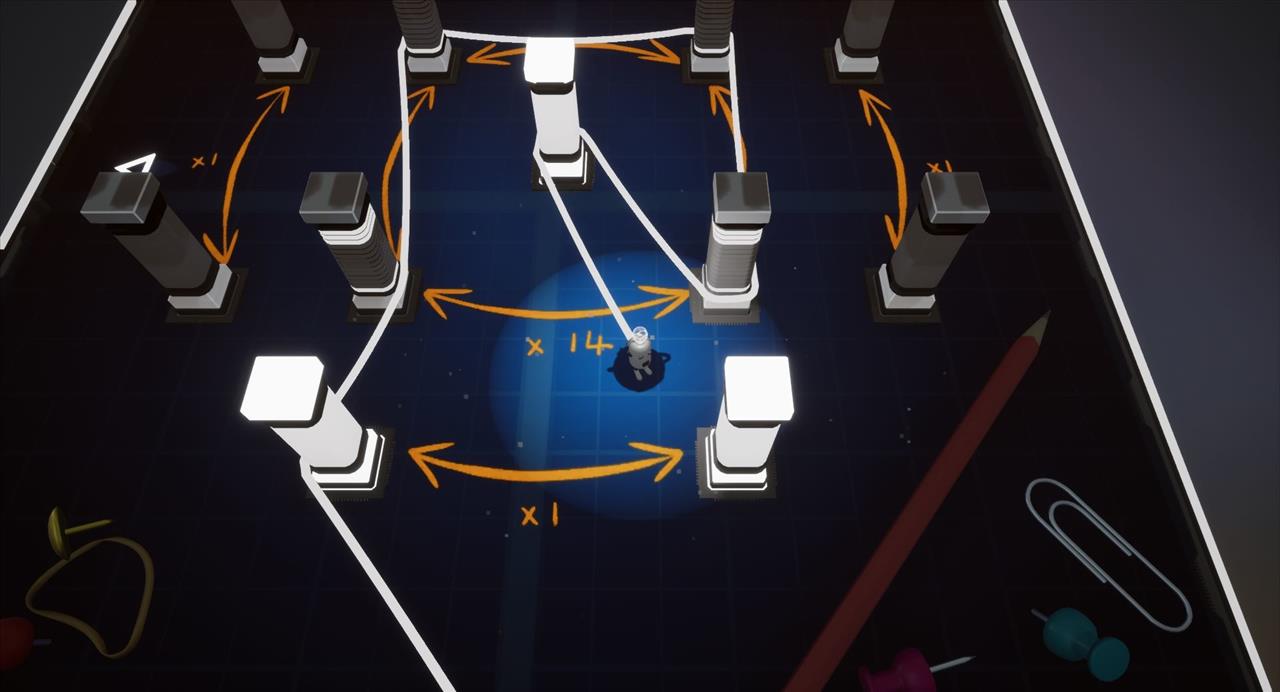 This might be because, yes, the developers also know how puzzle games work and that, yes, you may walk away from one pylon, go solve two or three others, and then come back to this troublesome one. You just might need to ramp up to this particular pylon’s idiosyncrasies again, from the beginning. So it gently lands you on puzzle one of five. But you can leap back up to where you were if you’re determined. I typically went right up to where I’d left off. I told you, I’m not the type of gamer that’s going to be willing or able to solve the same puzzle over and over again if I don’t have to.

The voice overs, coming from the marooned individual presumably on the ship’s bridge, locked behind hundreds of puzzles, is a sight for sore eyes. Or at least the audio equivalent of that. I would’ve never gotten as far as I did in the preview were it not for her, eeking out a little bit more Firewatch-styled dialogue. Well, monologue, anyway. Remember, she may have visibility on the puzzles you’re solving, and she may give you some encouragement along the way, but you have no means of responding. The captain just has to take your word for it, so to speak, that you’re doing your best to help out the crew of the Alabaster and that you have no malevolent intentions.

Filament is a game about color and light. It doesn’t get dark, physically or metaphorically. Video games have trained me to expect things to get dark, but that doesn’t seem to be Filament’s M.O. In fact, the ship is fun-loving and cluttered in a very lived-in way, contrasting to the necessary sterility of the puzzle rooms. The whole place isn’t bedecked with throw pillows and fuzzy blankets, but it’s easy to tell that the Alabaster was a home and not just a cold, careless starship. 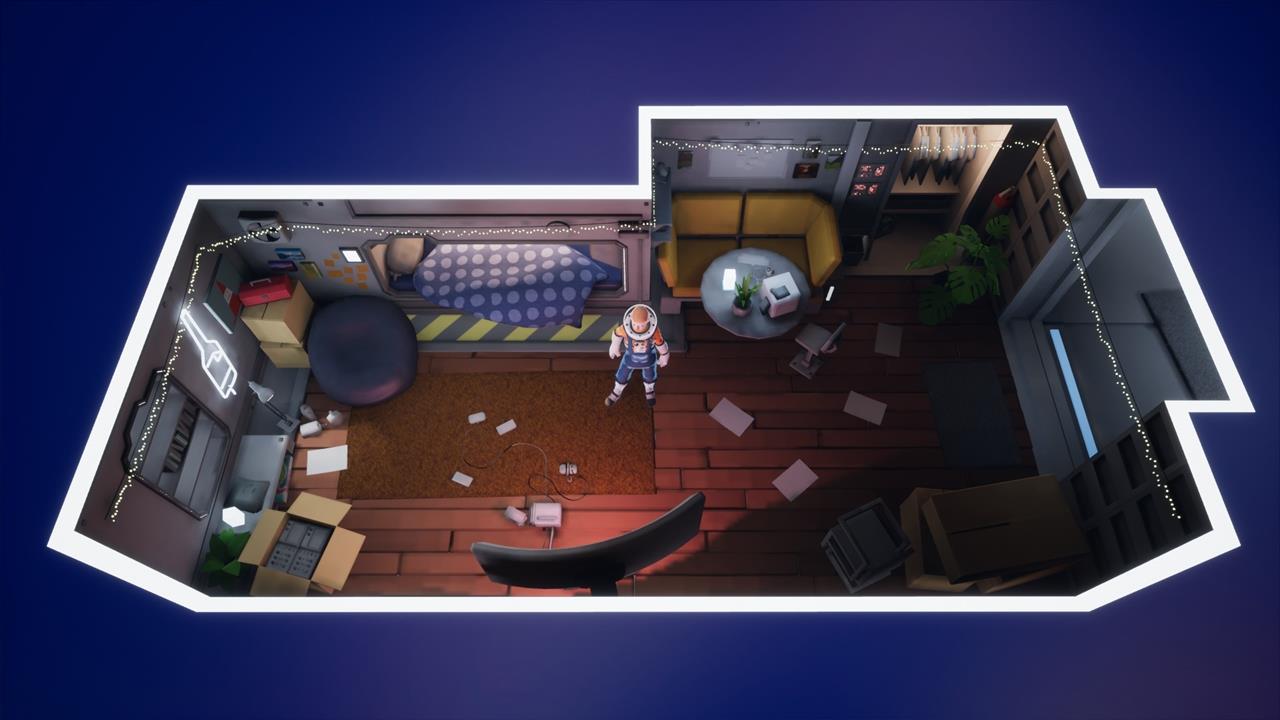 Then I stumble across a good ol’ CRT monitor, a central computer, in all its 4:3 aspect ratio and terminal fonts. There’s a lot on there that I don’t fully grasp. There are system(s) online, system(s) offline, and system(s) unresponsive. There are Unresolved Issue(s) preceded by a number that’s much bigger than I’d hoped to see at this point. And there’s a motherboard-looking map of this homely spacecraft, featuring blue and orange dots that I’m sure are not colored in my favor. There’s removable storage which--look, I’m going to be honest--I barely know what to do with in real life, let alone this in-game storage which has a whole lot of question marks where there should be message logs.

But there are a ton of message logs. Internal emails, basically. I really wish I would’ve seen some of these along the way. Instead I was handed a completely packed inbox of messages that I hungrily ate up. I read them, all of them, beginning to end. Because while the captain’s voice overs are good, I wanted more, and reading people’s emails is as good a way as any to give me my video game lore- and world-building.

Despite taking plenty of art classes in high school, I never got further than Roy G. Biv when it came to identifying the color wheel. You know Roy G. Biv: it’s an acronym for red, orange, yellow, green, blue, indigo, violet. They’re the primary stops on the color spectrum. But in Filament, Roy G. Biv is for casuals. I’m now being asked to care for colors like “marmalade” and “juniper” as though the colors themselves are people. Because they essentially are, in this game anyway. 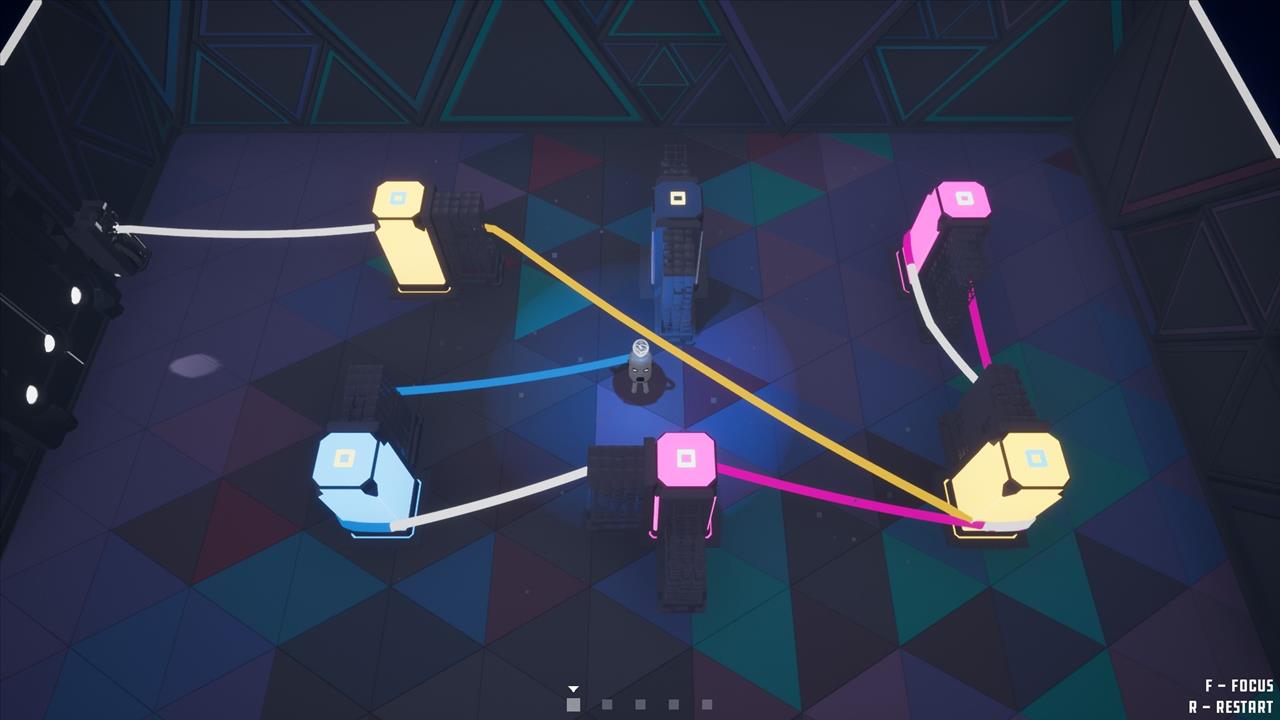 I’m finding that a crewmember named Vermillion (to me vermillion just means “red”) has a lot of medical expertise to lend to the crew. And that Juniper (uh, blue-green?) is feeling pretty snarky about Canary (ooh, I know this one: yellow?) also  feeling pretty snarky. There’s a whole lot of mood going on in this game that I was unaware of--at least fully--until I stumbled across this good ol’ email terminal. And hey, I might have a chance of remembering Pistachio because they’re a light-green color and they work in the greenhouse. Whew. Nailed one.

Filament isn’t without some wrinkles. The filament rope would inexplicably snap off behind me sometimes. No idea if it was because I’d tried and retried too many wrong puzzle-solving stretches, was so far off that the game was giving the rope a mercy cut, or if it was just an out-and-out glitch. I’m guessing it was that last one. There’s no reason it should’ve allowed me to run around untethered from time to time, but it did. Can’t solve the puzzle without the filament, so that meant you were restarting the level.

But I like Filament. Even if puzzle games want to fight me more than friend me. If it weren’t for the environmental storytelling and the chit chat from the captain, I wouldn’t have committed as much to the game. Solving puzzles, in and of themselves, doesn’t give me the dopamine hit that it gives to some people. It’s just not enough. But solving light bulb puzzles and then being rewarded with storyline? That combination brightened my day.