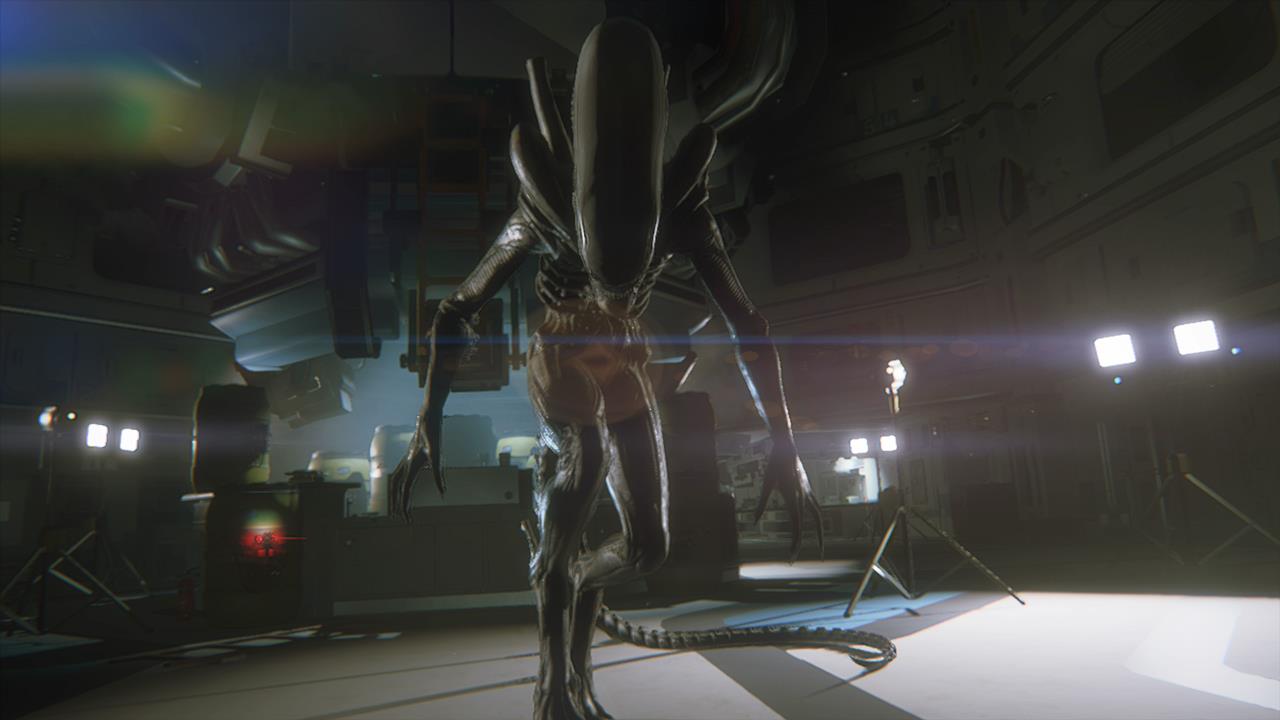 Once, maybe twice, per console generation, you encounter a game that is as close to perfectly balanced as possible. This is a game where artistic vision, technological skill, gameplay concept and narrative design all synergize into a singular experiential tour-de-force, a game that knows exactly what it is, what it aims to accomplish, and pulls off a nearly flawless, seemingly effortless execution. For a lot of people that game is The Witcher 3, or 2016’s Doom reboot, and on the latter I’d have to agree. But above both of those, for me at least, is Alien: Isolation.

Released in October 2014 by Sega and developed by Creative Assembly, Alien: Isolation captured—and extrapolated on—Ridley Scott’s 1979 sci-fi horror masterpiece in a way that was both richly expansive and mechanically succinct. While the environments, art direction and exploration perfectly translated the dreary atmosphere and setting of the original film into an indulgent, almost meandering corporate dystopia, the gameplay laser-focused onto pure, distilled dread and kept the tension high for nearly the entire playtime. The game constantly victimizes the player with the legendary Alien, using advanced AI and a persistently inconvenient, passive-aggressive environment to trap the player in a maze and torment them with unease. And now you can carry this sadistic haunted house around in your pocket.

I won’t belabor the high points as you could just read my original review from 2014, but I do want to get across just how potent a horror experience Alien: Isolation still is, and just how effectively it adapts to a portable platform like the Nintendo Switch. Ported with impeccable skill by Feral Interactive—the studio that brought Grid Autosport to Switch—their work on Alien: Isolation might be even more impressive. I went in expecting at least a few cut corners as is customary with Switch ports, but encountered almost no shortcomings. It helps when you have such a masterfully crafted experience to begin with, but keeping it smooth, beautiful and most importantly terrifying when distilled onto a six-inch, 720p display takes considerable skill. 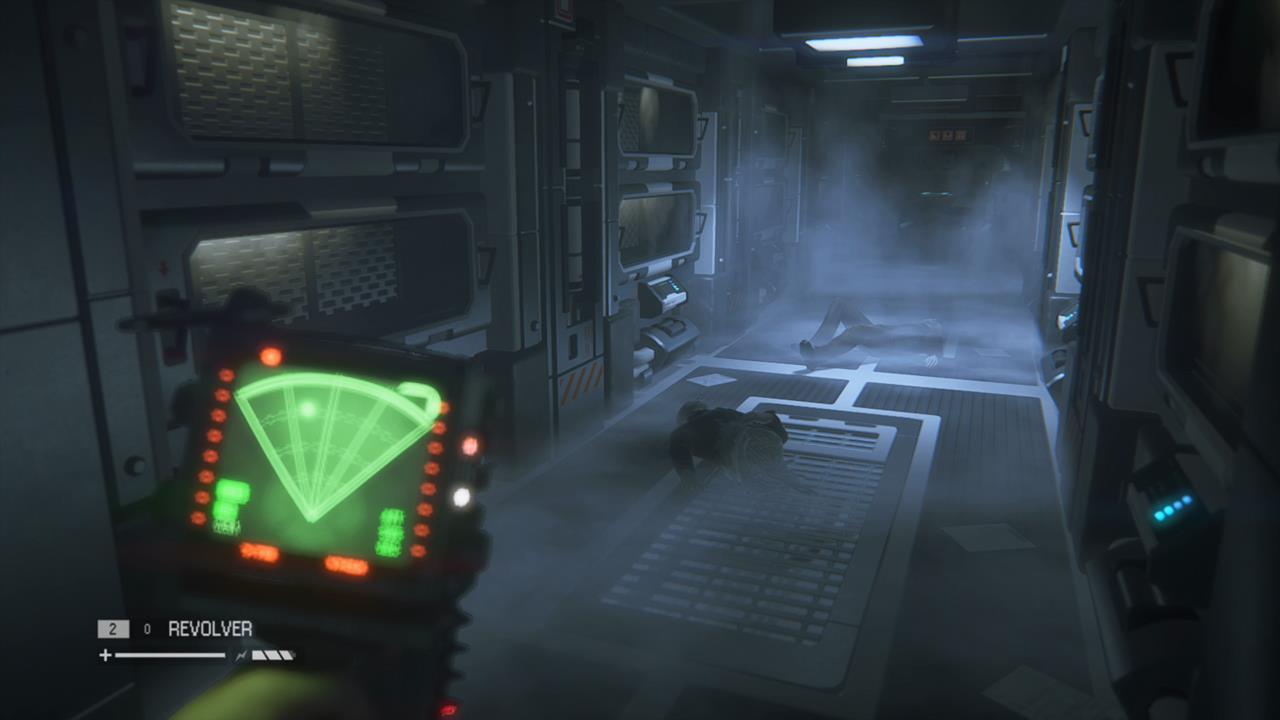 Alien: Isolation takes place 15 years after the original film. Ellen Ripley’s daughter, Amanda, doggedly searches for her mother, lost after her ship, the USCSS Nostromo, disappeared near Zeta Reticuli. Weyland Yutani, the infamous company that owned the Nostromo, informs Amanda that they may have a lead: the Nostromo’s flight recorder has been recovered and taken to a nearby free port, Sevastopol space station. Sevastopol is owned by a rival company, Seegson Corp, so Amanda and a handful of other company reps travel to the station to negotiate for the return of the black box.

When they arrive, it’s clear something has gone very wrong. Long languishing in disrepair and bankruptcy, Sevastopol is falling apart. Amanda is separated from her team during an EVA and barely makes it onto the station alive. As she searches for her missing crewmates she quickly discovers that something unspeakable: an implacable alien monster is stalking the surviving population of Sevastopol. The few remaining humans on board are paranoid and violent, but worse, this alien entity soon takes to hunting Amanda as well. Alien: Isolation is a slow burn to start but once Amanda is trapped aboard the station she’s really never safe. The Alien or the murderous Seegson androids are always after her, and this up-and-down roller coaster of cold sweat tension only lets up occasionally, just barely long enough to catch your breath. A big part of this is how claustrophobic, dim and dreary the game world is. 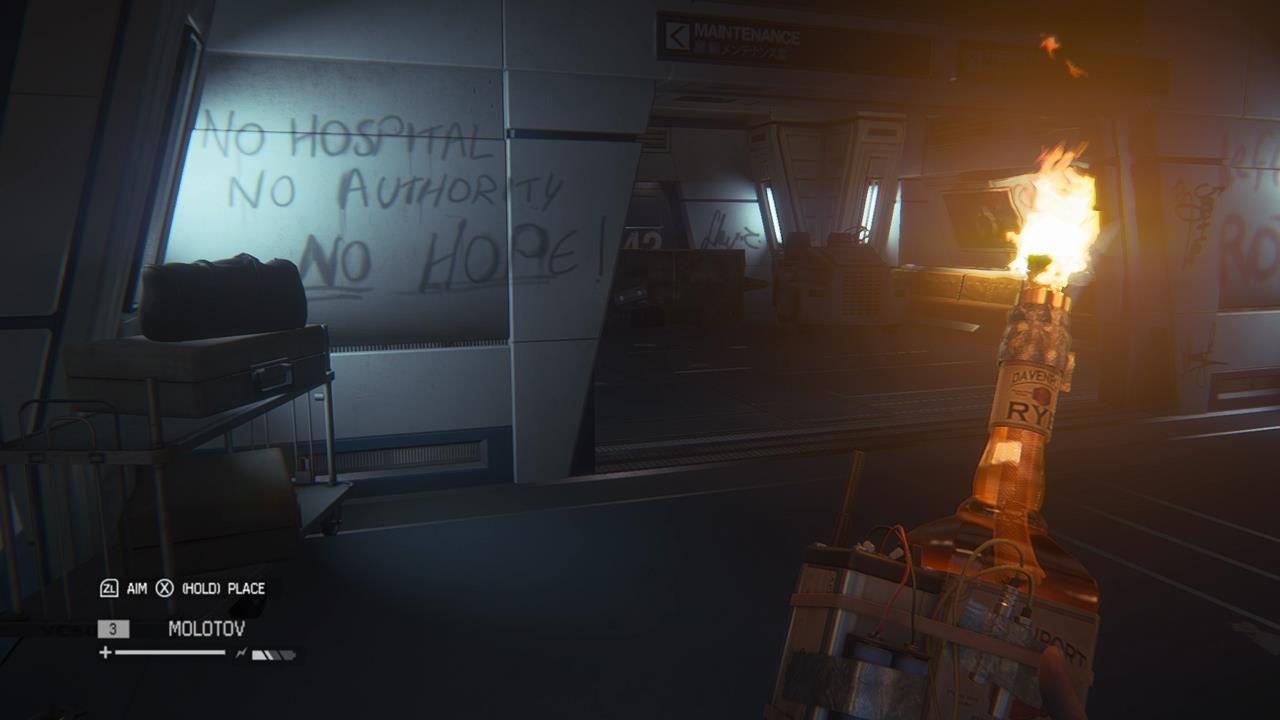 When originally developing Alien: Isolation, the team at Creative Assembly soon discovered that the Alien itself, even with its full suite of deviously adaptive AI, is only as scary as the environment you put it in. A bare, dark maze might put you on edge, but the retro sci-fi walls of the Nostromo turned the experience into something close-in and sweaty, an almost unbearably queasy and suspenseful endurance test of being stalked by something awful. Thankfully, Feral Interactive have moved this atmosphere and setting onto Switch practically untouched.

Sevastopol is still a beautifully oppressive neo-corporate hellscape, a thin veneer of professionalism lying in tatters to reveal the botched scramble of industrial disrepair beneath. Creative Assembly accomplished some very impressive texture and material effects—leather, burnished steel, pebbled glass, dull plastic—and all of that comes through on Switch. The station’s padded cream walls and flickering displays clash and flow into conduits, generators, dripping pipes and smoky ventilation ducts. Scattered throughout are the mundane details of everyday living; bobbleheads, magazines, drinking birds, those unmistakable off-white plastic Tupperware coffee mugs. Sevastopol’s rugged, dilapidated mundanity comes through in dozens of subtle little details that make it look and feel like a real place, a place that would be depressing enough to work in even before you were being hunted by an alien monster and a bunch of creepy wigged-out androids. 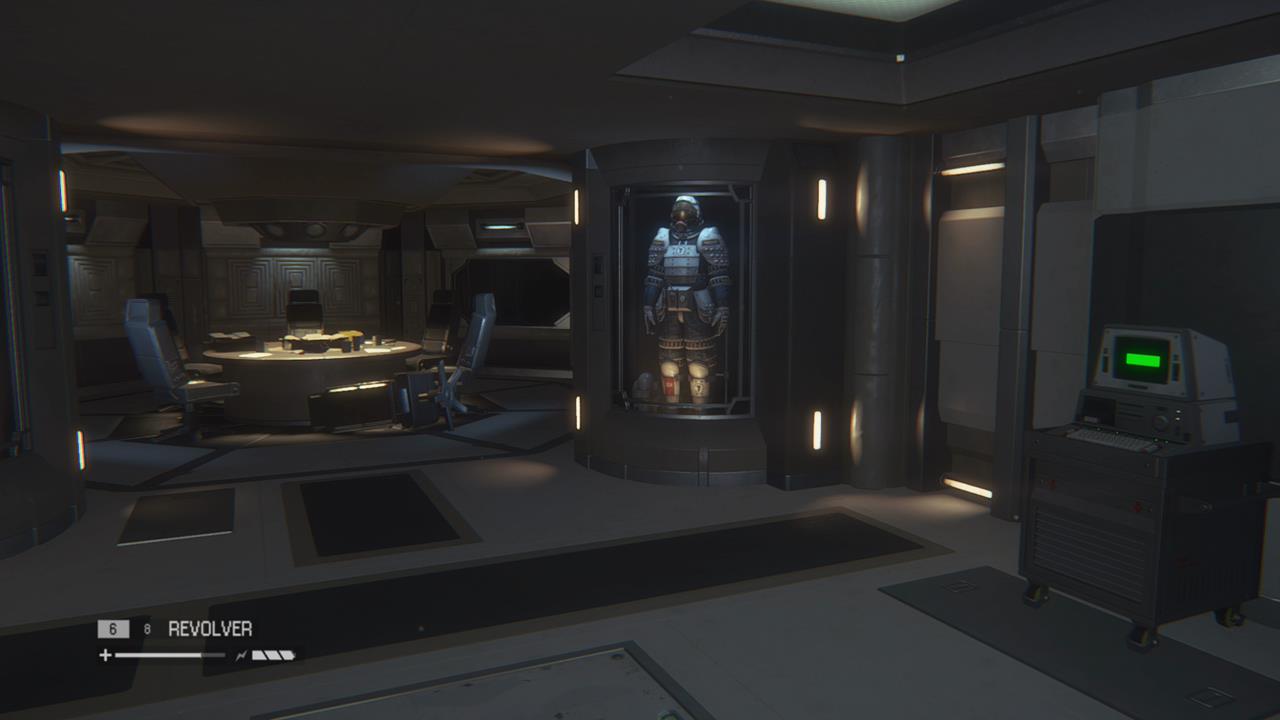 It’s a perfect extrapolation of the speculative late-70s futurism that characterized the film: a cluttered, analog, user-unfriendly environment that frustrates your path in a hundred nagging little ways as you’re desperately trying to hide, to get away. Even the color balance is perfect, recreating that distinctive soft warmth of '70s filmstock that belies the harsh bureaucratic indifference of Sevastopol. It’s a wonderfully effective place to be hunted in, conveying and sustaining anxiety like no other game world I’ve inhabited before or since.

The Alien is the other half of that equation and is equally well designed by Creative Assembly and well translated by Feral to Switch. Originally conjured from the actual nightmares of Swiss surrealist H.R. Giger, the Alien is concentrated liquid fear, a blend of organic and mechanical shapes that add up to a graceful, intimidating, uncomfortably sexual silhouette that stomps and slithers through the corridors of Sevastopol as if it were right at home. Invulnerable to the small arms you have on hand, you can only momentarily frighten the Alien with fire; first with cobbled together Molotov cocktails and after about the halfway point, a flamethrower. You cannot outrun, mortally wound or completely escape the Alien, and if it sees and catches you it is instantly lethal. 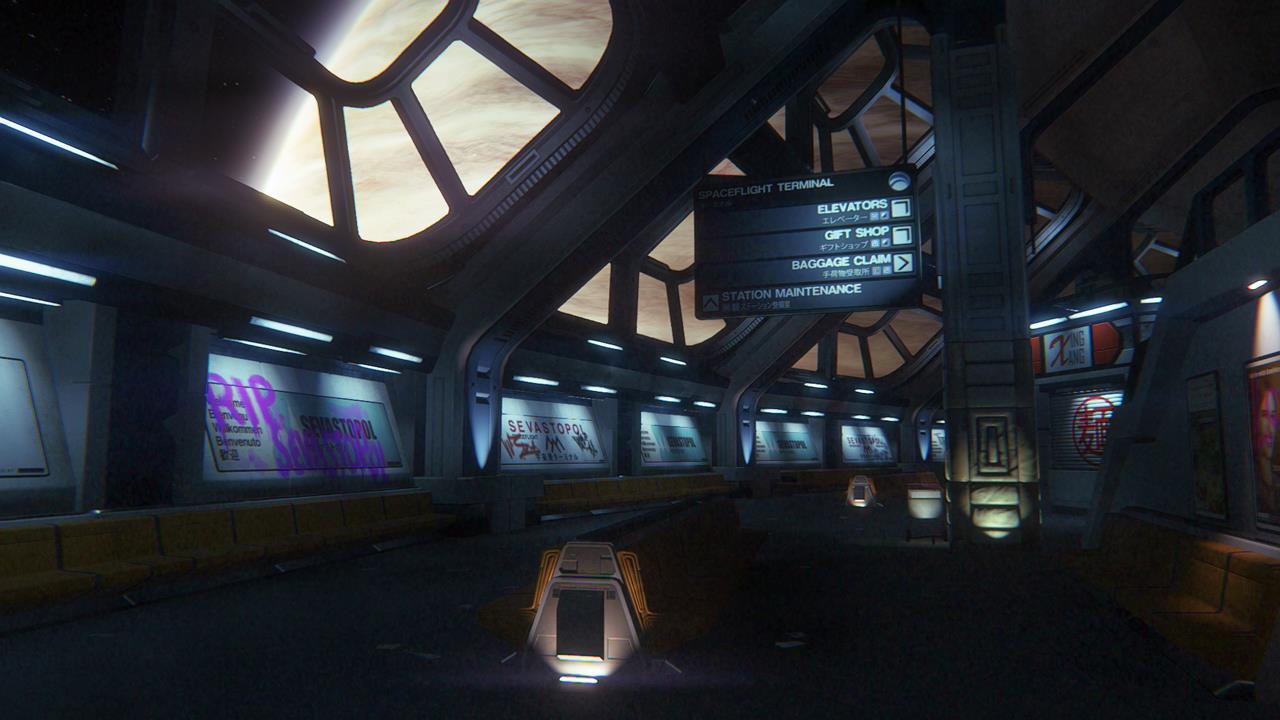 I’ve been playing this game for five years now and the blasted Alien still manages to surprise me. At one point I was inching away from the thing down a long corridor, and barely managed to creep through the bulkhead door when the monster spun around and spotted me. Acting quick I smashed the emergency lock and sealed the door, thinking that I’d trapped the creature long enough to make my escape. Without missing a beat the Alien bounded up into a ventilation duct, bypassed the locked door, dropped down behind me and shivved me with its spiked tail, all in a handful of heartbeats. This monster is smart, will adapt to your tactics over the course of the game, and it’s just as terrifying on Switch as it was on PC five years ago.

Feral’s port maintains all of this at 30fps both docked and in portable mode for nearly the whole game; I encountered only the occasional framerate hitch, and only two bugs, both of which occurred during scripted events, strangely enough. At the beginning of the game when the character Axel is leading you through an extended tutorial, at one point his voice lines stopped playing. Later in the game, when the Alien is scripted to corner you before an explosion goes off, the Alien was strangely absent from the scene. Loading from my last save rectified both of these issues, so hopefully a patch later will smooth these things out permanently. Otherwise Alien: Isolation is a technological accomplishment on Switch, and unless you have a very trained eye it’s indistinguishable from the PS4 and Xbox One versions. 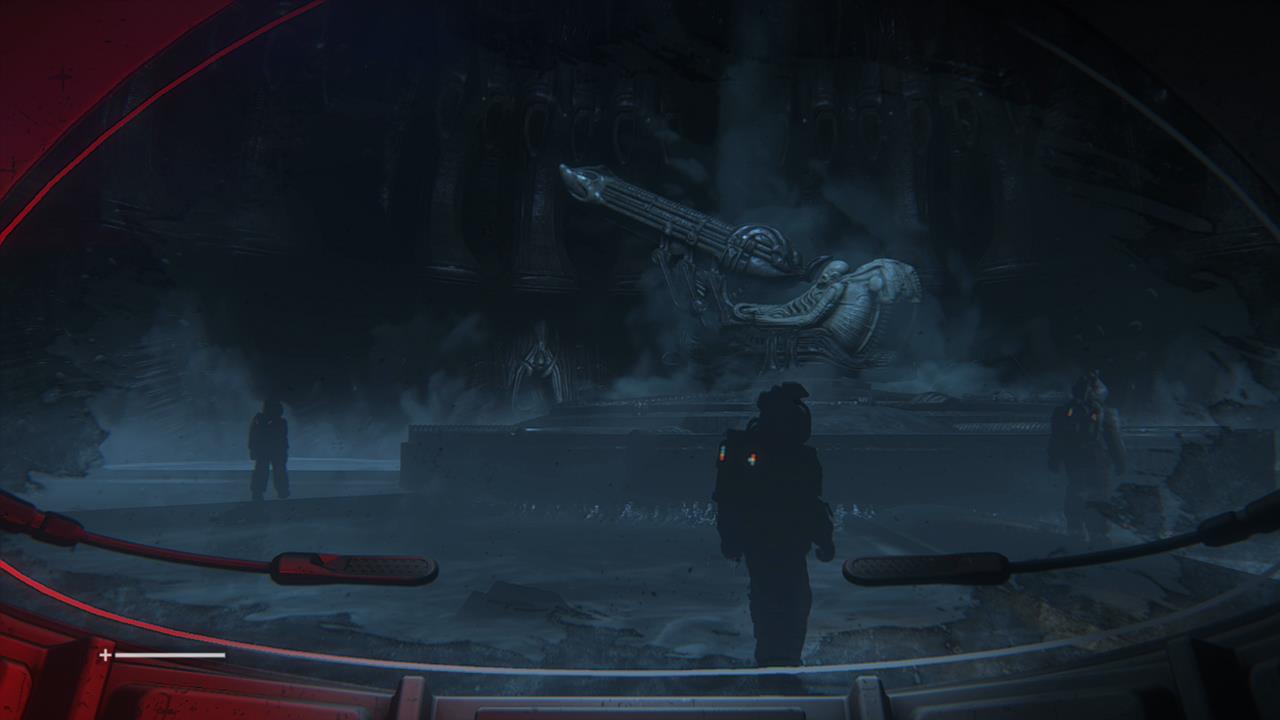 Switch owners even get a few bonuses. For starters this port includes all DLC released for the original game, including the Crew Expendable and Last Survivor bonus missions that recreate sequences from the film and let you play as the Nostromo crew. You also get all five packs of challenge missions for the game’s survivor mode. I didn’t groove on these as much as I’d hoped back when the game released in 2014, mainly because they were more score-based than narrative heavy, but they’re nice for completion and if you want more of the core experience’s gameplay. The Switch port also has surprisingly responsive motion aiming, and an effective use of HD rumble. If you’re playing with Joy-Cons or the Pro Controller, the motion tracker lets you feel both the direction and proximity of the Alien through fine-tuned pulses. It gives the game’s most useful item, which was designed with tension-raising limitations in mind, just a little more utility.

Honestly, there isn’t much more I can say without just repeating the praises I heaped on this game back in 2014. It’s held up remarkably well, which is a testament to what a horror masterpiece it was when it launched. Feral Interactive deserve a lot of credit for bringing this game to Switch with almost no compromises; as far as I’m concerned they stand alongside Panic Button, Saber Interactive and Virtuous Games in pushing the Switch hardware’s limits and getting the most out of it. Suffice to say, if you’re a horror fan and still haven’t experienced Alien: Isolation, pick it up on Switch. It’s still an uncompromising, difficult, beautiful game that will ignite your senses and test your nerves. Five years later, it’s still giving me nightmares.

Feral Interactive has ported Alien: Isolation to Switch with no cut corners. Simply put, this game is a timeless horror masterpiece that ratchets up the dread and doesn't let up, and it looks and plays amazingly on Switch. Don't pass it up.