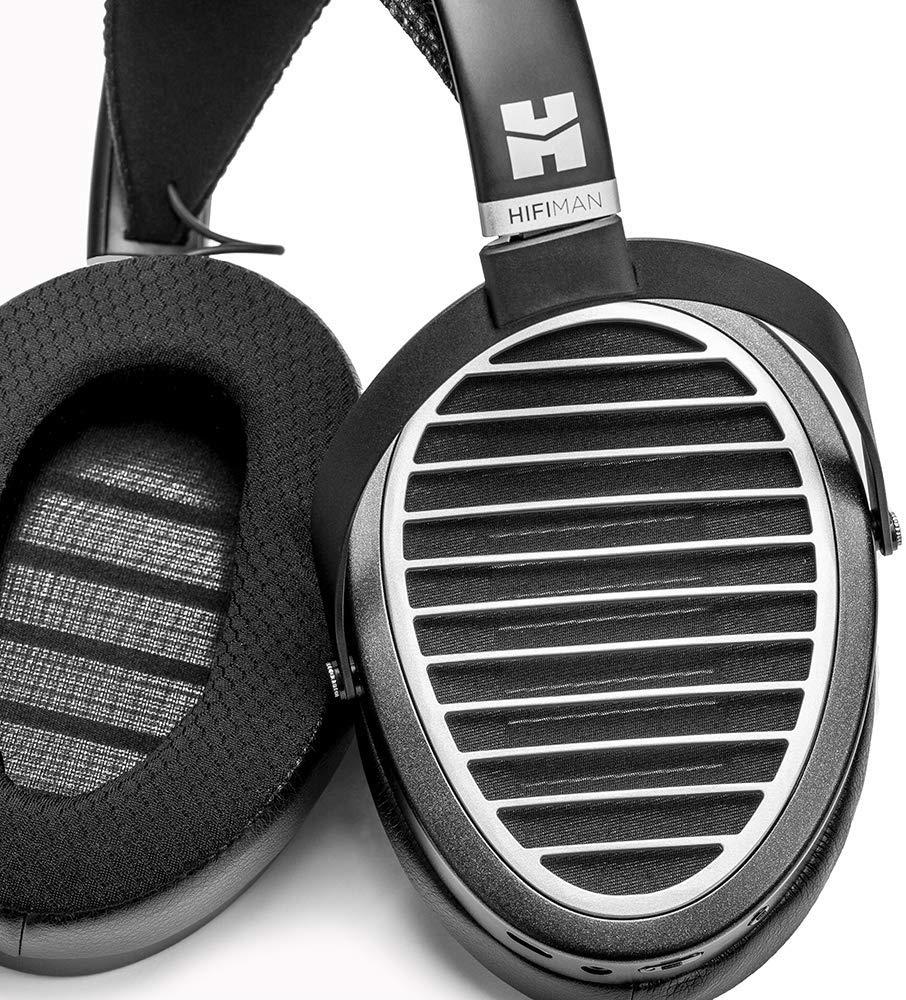 There used to be a time in audio when anything that wasn’t plugged into an amp was considered cheap. Granted, I’m talking 30 years ago when Bluetooth wasn’t more than an idea by Nils Rydbeck as he tried to develop a short link technology that allowed users to enjoy audio without having to deal with cords. In those days, there were two kinds of headsets: Personal use and professional grade. Walkmans and Discmans became the thing to have and grabbing a pair of headphones to plug into a mini-jack was the best way to get sound on the go, but then technology improved. 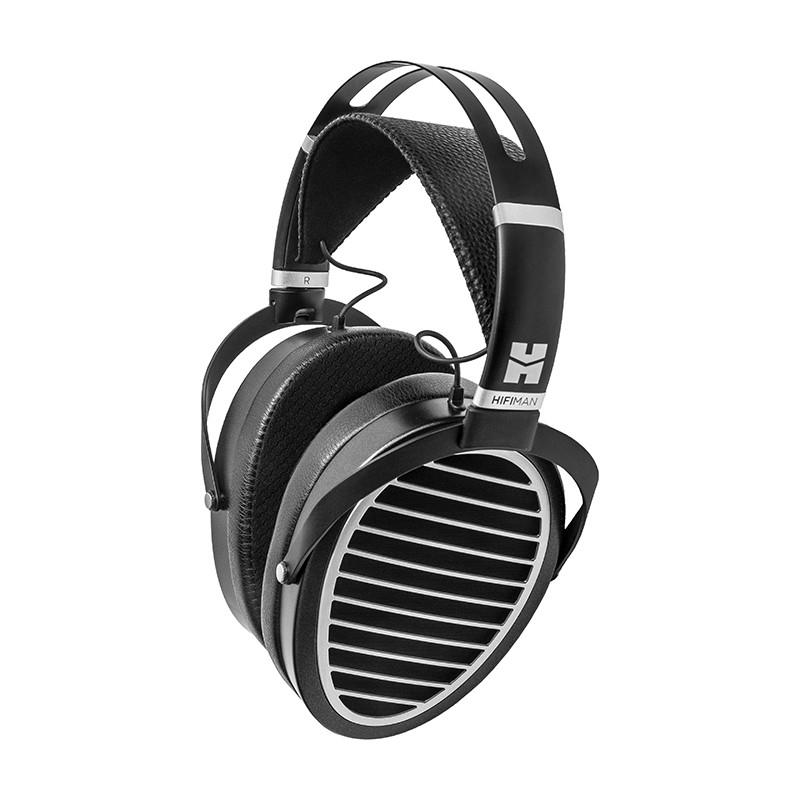 Bluetooth, noise cancellation and noise isolation became staples of the industry, and companies found new ways to create fantastic audio options without having to purchase several other accessories to maximize quality. Gamers fall into a strange niche when it comes to audio, though. Having options for PC, console, mobile gaming and just general audio are all items that have to be considered when making a purchase. Throw in the need for voice chat and it only further complicates issues. The good news is that there are always options, and sometimes you want to splurge and get the best audio. Hifiman understands this and now has an option that covers most of what a gamer needs with the Ananda-BT headphones.

That frequency range is just wonderful, especially when taking into consideration you’ll get up to 24bit/192khz via USB, dropping down to 96khz via Bluetooth. The playback time of 10 hours is completely understandable as this headset is going to push out the best quality sound possible and not want to conserve power. The support of lossless audio files in the form of Hi-Res Wireless Audio, LDAC and Qualcomm aptX HD is simply fantastic. 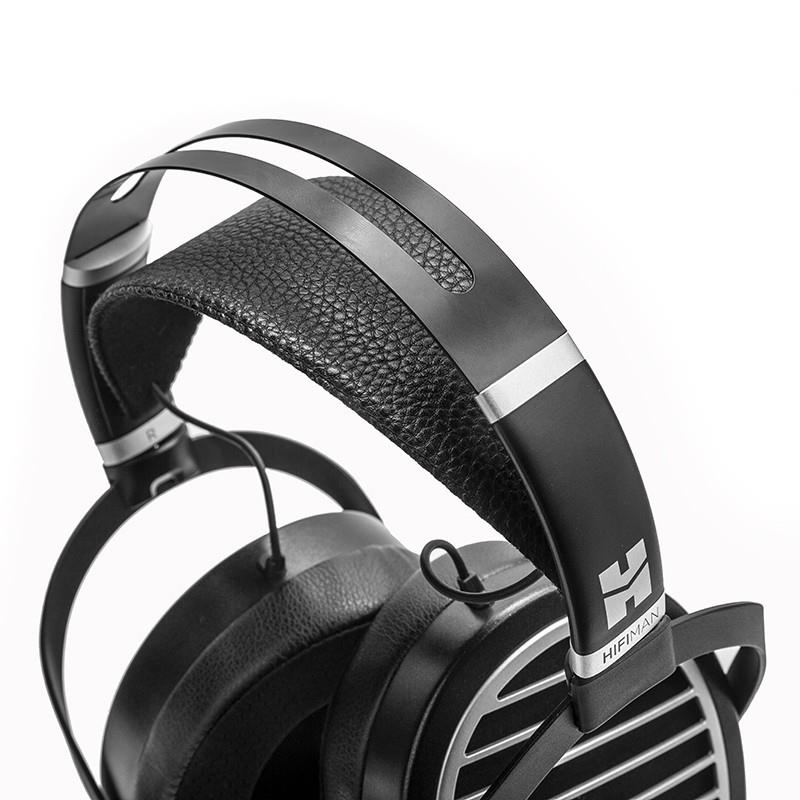 A comfortable design, but maybe a tad bulky?

The headset design is quite unique and unlike anything I’ve ever tested. While they haven’t made any changes to the original Ananda model that is not wireless, this is my first foray with the model series. The open back design is a refreshing change in a world that is dominated by noise cancellation. The on-board DAC adds a tad bit of weight from the original Ananda model as well. The headband is surprisingly comfortable, though the metal band for adjustment that supports the unit above it can look a little strange on anyone. That’s a small price to pay for amazing audio.

The earpieces are a tad bulky but not at all uncomfortable. The Ananda does a fantastic job of resting on the ears and head in a balanced state, though adjustment is a little rough. The band is strong, so getting the right sizing takes a bit of work. All in all, a solid design that I didn’t feel I was going to break it just by adjusting to get it on my head.

One thing I didn’t figure out early on was that there is a specific charging mode for the headset. A press of a button will put the headset into charging mode, but you can still listen to them while charging.

There are three plug-in accessories that come with the headset: The microphone, a USB-A to USB-C cable, and USB-C to USB-C. This allows for connectivity for just about anything in your home, though there is no 3.5mm cable for this as it simply is not designed to be utilized that way. That port is for the microphone and nothing else. 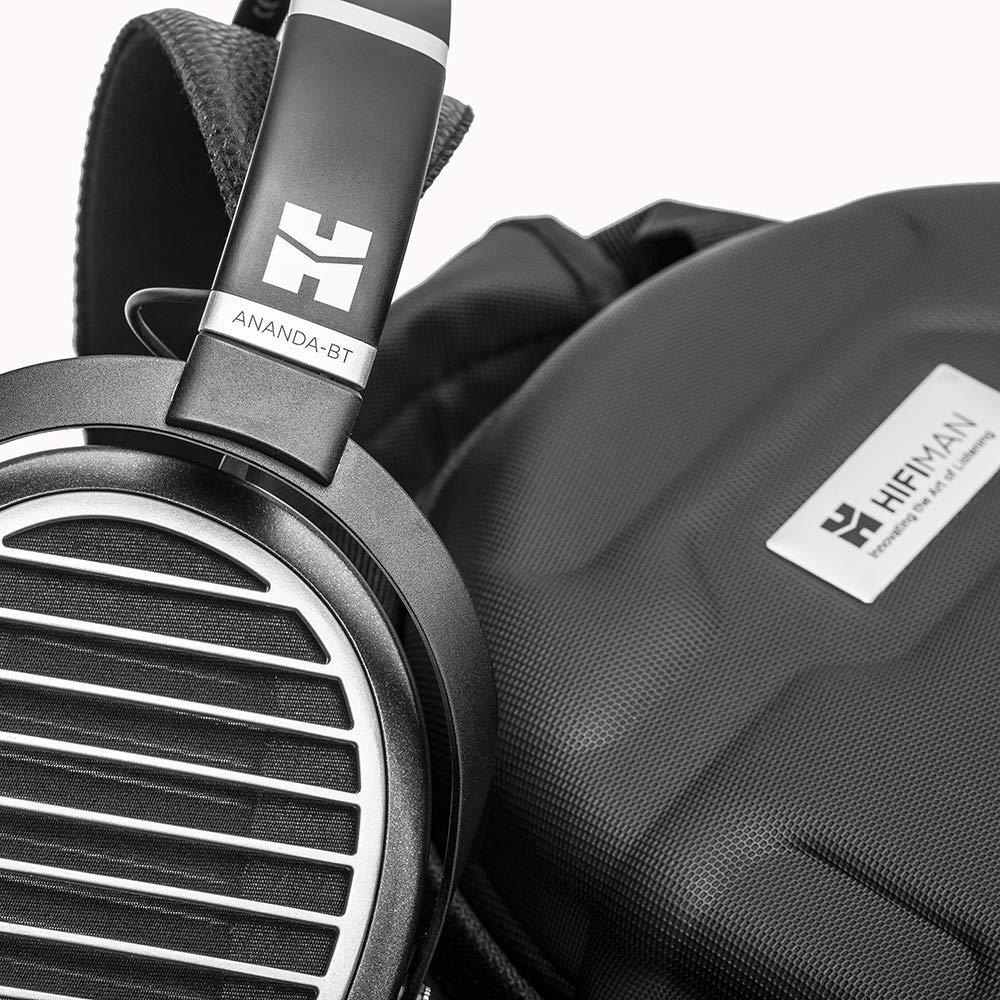 Enough about the aesthetics. How do they sound?

Inside of the Ananda-BT is a custom-designed amplifier that matches up well with the HD codecs I listed above. Of course, you do not need to have only these audio files to enjoy the headset. Just using the headphones on YouTube yielded a gorgeous, rich sound on anything that had a good bitrate to it. I spent my first week with this headset just going through various ways to listen to them. Spotify yielded some great results as well as Pandora. YouTube, as expected, was a mixed bag because the headphones are at the mercy of the quality of the recording. Spotify and Pandora provide good quality files, in contrast.

The Ananda-BT truly stood out as soon as I found audio files with the lossless codecs. I stumbled across John Carpenter’s Lost Themes on YouTube recorded in AAC as a lossless rip. It’s at this point where even my solid Sony noise cancelling headphones sounded like tin cans on my ear. It was like being awakened by the cleanest audio possible, and I hadn’t scratched the surface yet.

This is where I ran into a minor issue with the headset: Pairing. The Ananda-BT, the moment it’s turned on, will go into pairing mode and search for the last thing it connected to. If it finds it, great: The headset is connected. The annoyance comes into play when it’s connected to a source you don’t want to use at that time. Switching between my phone and PC was a chore because I’d have to drop pairing on my phone and power cycle the headset to get it back into pairing mode. Basically, it wanted to hang onto the prior source even if it was turned off. Again, this is a very minor detail but I do wish it was a tad easier to switch sources.

Switching from my phone to the PC yielded no change in audio quality via Bluetooth or hooked up to the USB-C cable. The headphone might make a quick switch and lose audio for a second, but the music resumed almost instantly. Connecting the cable via USB-C yielded another minor issue in the form of multiple units detected, even though it was the same headset. This may not be the headset’s fault, though. It appears that Windows wants to detect it as both a listening device and a communication device. When I first plugged into the PC, I noticed the audio was a drastic dip in quality. It sounded like a bad phone connection, to give it a comparison. Switching to the proper source on the PC corrected the issue and I was back to high resolution sound in no time.

Speaking of communication devices, let’s talk about the microphone for a second. The microphone isn’t bad at all. It’s pretty good in comparison to a lot of units I’ve tested, but it’s not going to set any records. It also rests really low from my mouth and my friends on Discord said I came through okay, but I sounded a bit far away. Eventually, I gave up using the microphone and opted for my Yeti Blue like usual. Is it great to have the option of a microphone? Sure, but you’re not dropping this kind of coin for a communication device. 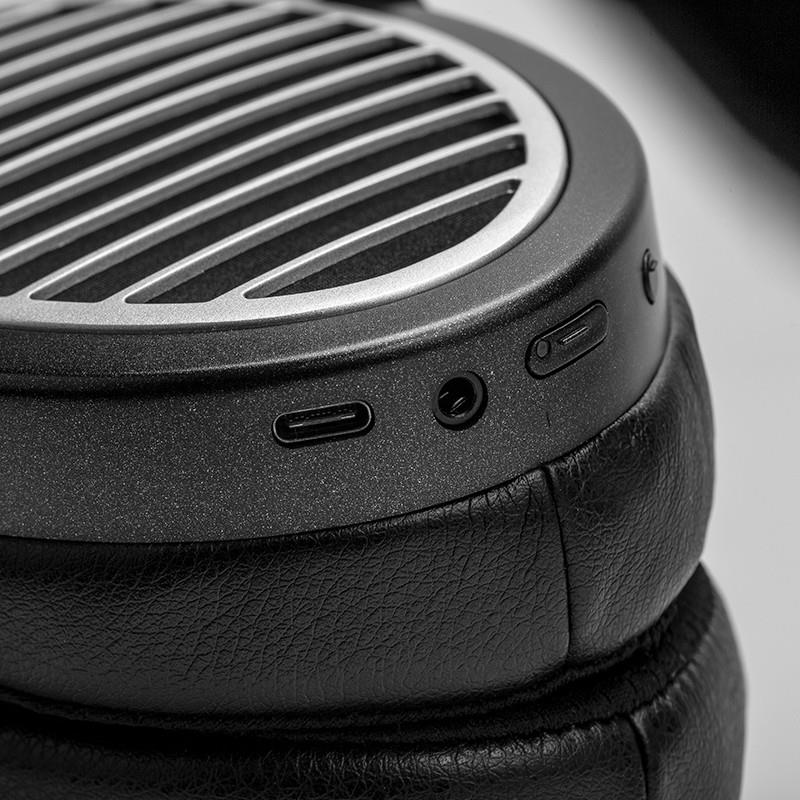 So how did gaming sound?

Gaming headphones today try their hardest to simulate the best surround performance possible, and some do a great job! There’s just no comparison at all that will do justice for these, though. Even my current favorite gaming headset is a solid step or two down. That makes sense, given the price point and what’s actually inside the headsets. The best way I can put it to start out is that even a simple game like Citystate, which is a SimCity-esque builder, sounds incredible with the Ananda-BT on my head.

If my regular gaming headsets allow me to hear everything going around me, no matter the game I’m playing then the Ananda-BT will let me actually feel it. The first truly mind-blowing experience was in Rocket League, of all games. When scoring a goal, there are different celebrations that can be used. They’ll be everything from an explosion of fireworks to a bunch of balloons bursting. The celebration that made me sit up and take notice was the “drop of water” celebration. The depth of clarity and quality in just one simple noise made me realize how special these headphones are. I don’t get that feeling with other headsets, at least so far.

Games such as Skyrim, Hellblade: Senua’s Sacrifice, Elite: Dangerous and others brought the kind of experience once would expect from such a high quality device. New sounds weren’t just appearing, but they were becoming a staple. The littlest of sounds that I would miss through my regular speakers or standard headphones suddenly became an experience.

The open back design is certainly nice to have for gaming, given that it doesn’t shut out the outside sound. Noise cancellation is great, but it does drop the audio quality down a bit. This is perfectly fine when traveling on a plane and I want the outside world to fade away, but if I’m sitting at my desk and trying to lose myself in audio? This is the headset I want.

The drawback for gamers is that console users are left out in the cold due to the limitations of the Xbox One and PlayStation 4. Neither system can connect Bluetooth headphones unless specifically designed (Think Sony’s Gold and Platinum headsets) to do so. Wired connection also isn’t a possibility as anything wired has to go through the 3.5mm connection on either the Xbox One or PS4 controller. Simply put, hope that the PS5 or Xbox Series X support Bluetooth headphones without the limitations. 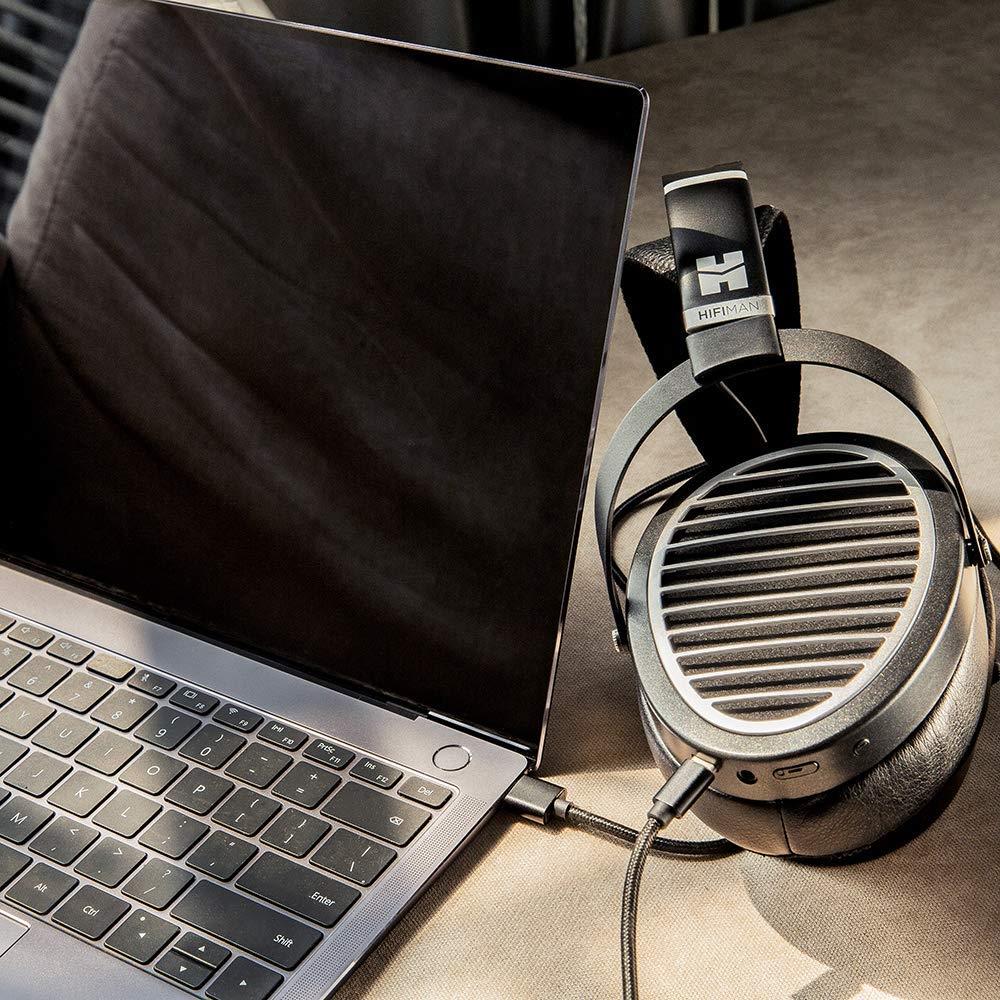 Let’s talk price, shall we?

If what I’ve described in this review sounds too good to be true, well here’s where the other shoe drops: These aren’t going to be for everyone. The Ananda-BT retails for $999 on their website and on Amazon. I have seen them go on sale for as low as $849 on Amazon, but that was a short-lived promotion. This isn’t just a random audio purchase, though: This is basically an investment in audio quality. It seems strange to say that an open-back wireless design is making me say that the price tag is justified, but here we are. It’s worth every last penny for top-notch audio. I cannot stress that enough.

Audiophiles should absolutely be rejoicing with this headset. Wireless or wired, this builds upon the success of the original Ananda and loses absolutely nothing in the process. From standard audio quality to lossless codecs, I truly struggle to find a downside to this headset. The pairing is a minor pain but quickly forgiven the moment the audio hits. If you have the budget and want to use the absolute best wireless headphones I’ve ever worn, don’t even think twice.

There's no question that Hifiman has truly outdone themselves. An open back, wireless headset that supports lossless audio without the need for an amp is a true accomplishment. Price point aside, you're not going to find a finer option for audio needs.