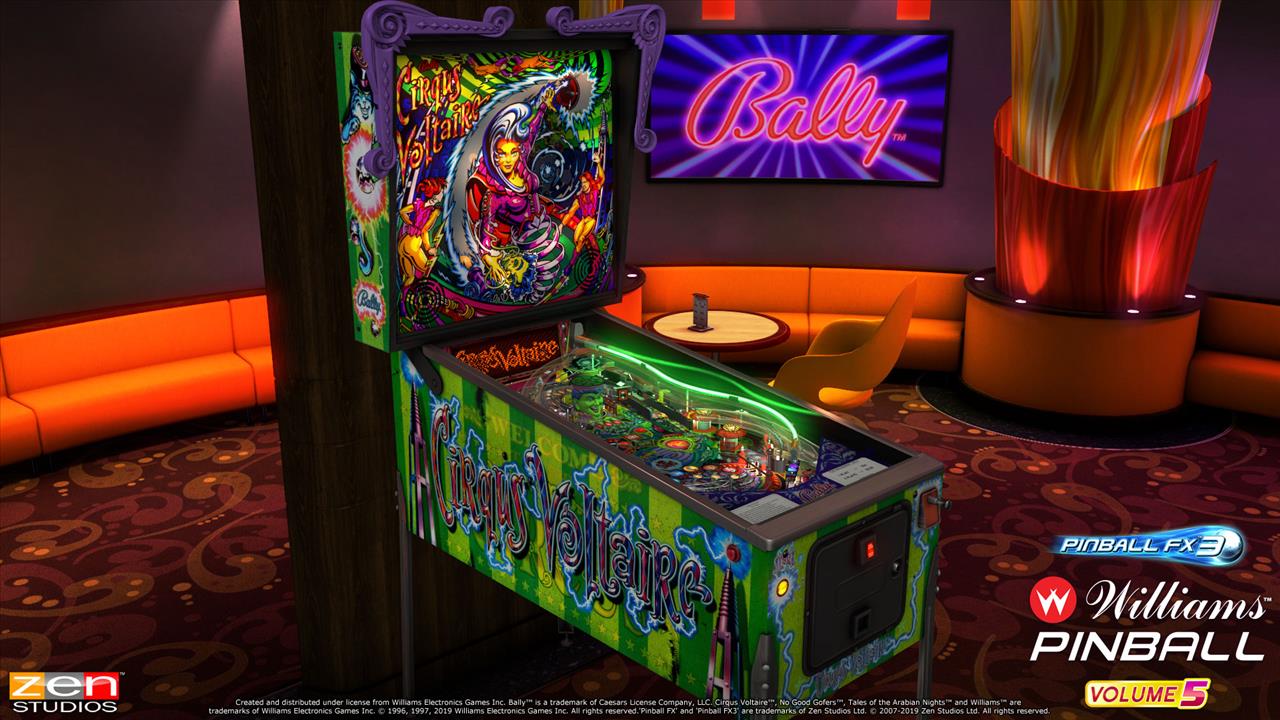 It is getting tougher and tougher to review Zen Studio’s excellent Williams Pinball releases. Zen has been cranking these things out at a rate of maybe one every other month – each pack containing two or three digital adaptations of classic Williams Pinball tables. While each pack is unique in that it contains different tables – when we review these games, we aren’t really reviewing the tables. We are reviewing the adaptation of the tables, and there are only so many ways to say “it’s perfect”.

The digitization of these tables is faithful and precise, which should come as a surprise to absolutely no one. Booting up Cirqus Voltaire, one of the cornerstones of this pack, I could practically smell the beer and stale cigarette smoke that I associate with this machine – I used to play it fairly regularly when I was younger. And it still makes me swear like a sailor. 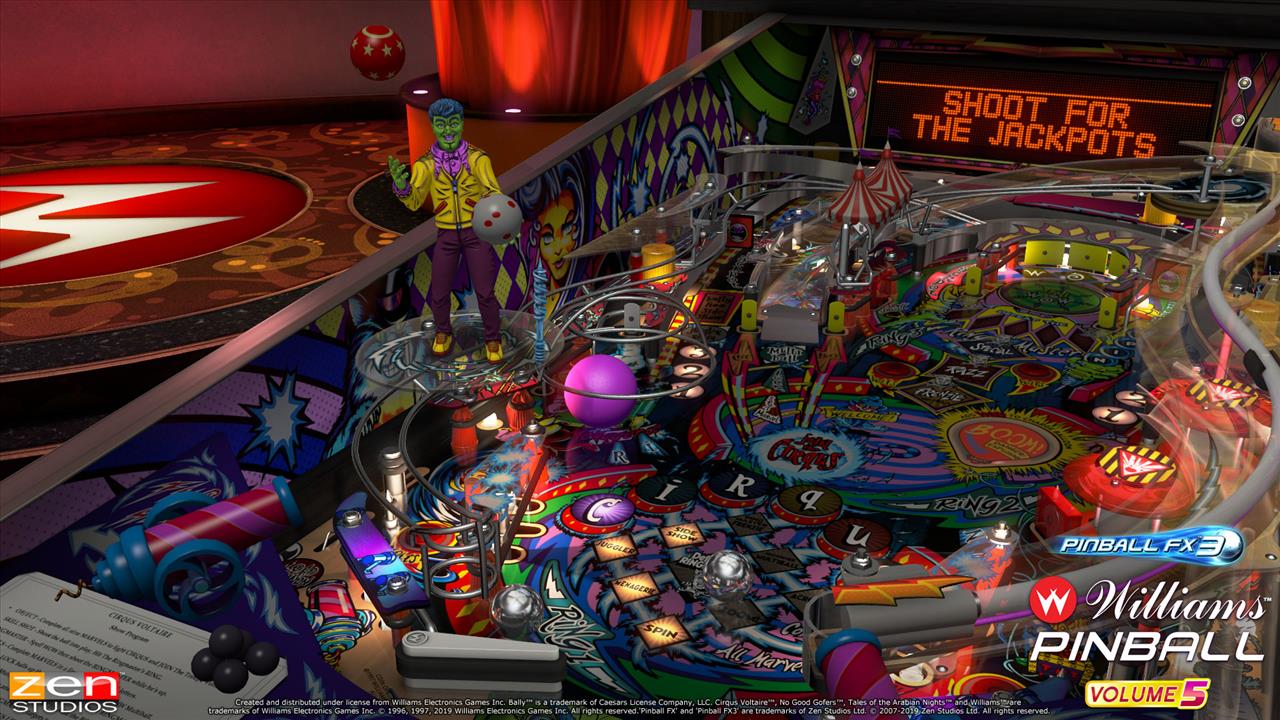 In many ways, these Williams packs are like hard drugs for me. There is nothing “Zen” about it. Every time I give in to the temptation and start one up, I feel a mix of guilt and exhilaration. I know that I shouldn’t start chasing the dragon, and yet I can’t help it. I sit in my living room, blood pressure rising, slowly becoming a monster. I shout out obscenities. I twitch and moan. I throw myself backwards on the sofa, every muscle in my body clenching up in cramps. I break out in cold sweats, putting one hand to my forehead (between balls), trying to gather myself. “What’s wrong with Daddy?” my daughter asks, and my wife just looks at me and shakes her head. “Not again,” she says. “When will you learn?”

Actually, this time she said, “It doesn’t seem like you ever have a very good time with that.” But I was. It was ecstasy, as usual. 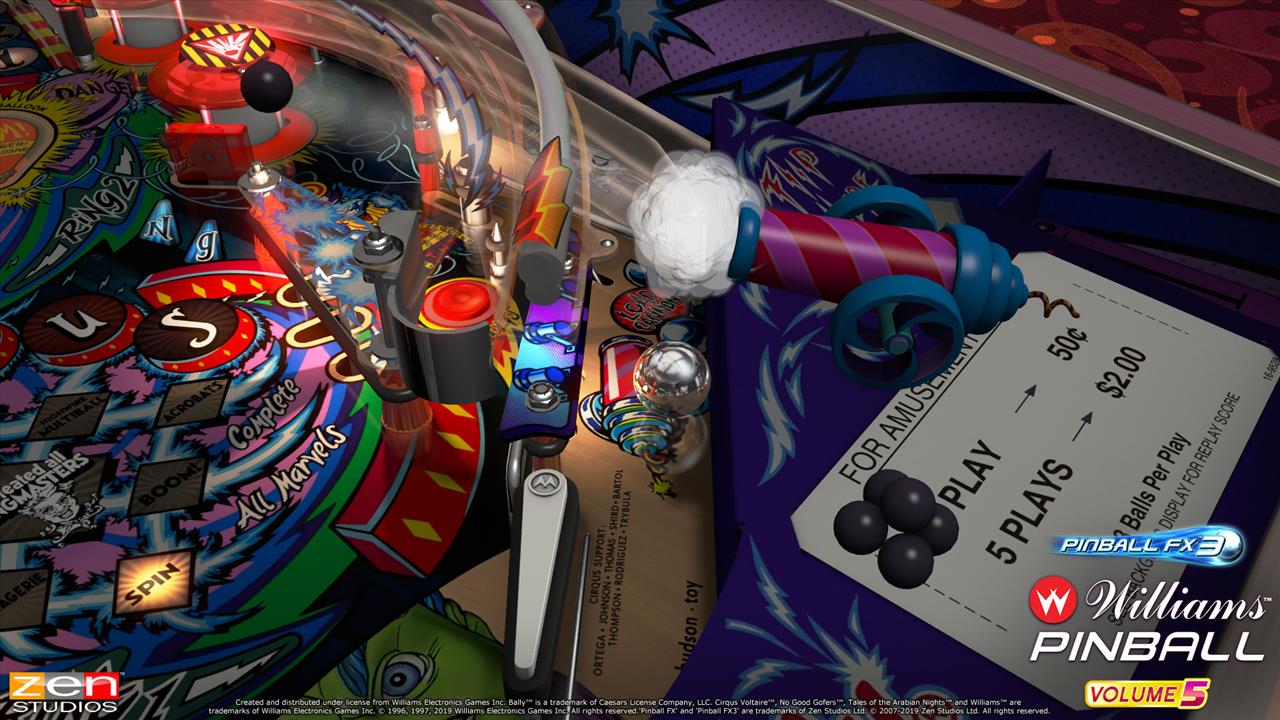 Because these tables each have individual world leaderboards, I play them in a very precise way. As my first goal, I just try to break the top 1000 in the world. Not so hard. But sometimes strangely elusive. Achieving that, I try to break the top 900. And so on and so on, until my carpal tunnel gets so bad that I’m forced to stop and nurse my numb fingers back to life. For me, its not about my score, its about where my score puts me in the rankings. (And no, I’ve never broken the top 100, except for when I get my sweaty hands on packs before they release. On those glorious occasions, I spend a few days in the hallowed top five before the rabble come rushing in and bust me back down to where I belong).

For all my enthusiasm, I’m relatively terrible at pinball. But I do love it. I took solace when playing the latest Williams pack that my son joined me for a few hours. He is the best gamer I know, and he sucked at these tables just as badly as I did. Pinball is a unique mistress, and the skills it requires are different from those needed for shooters and sports games. 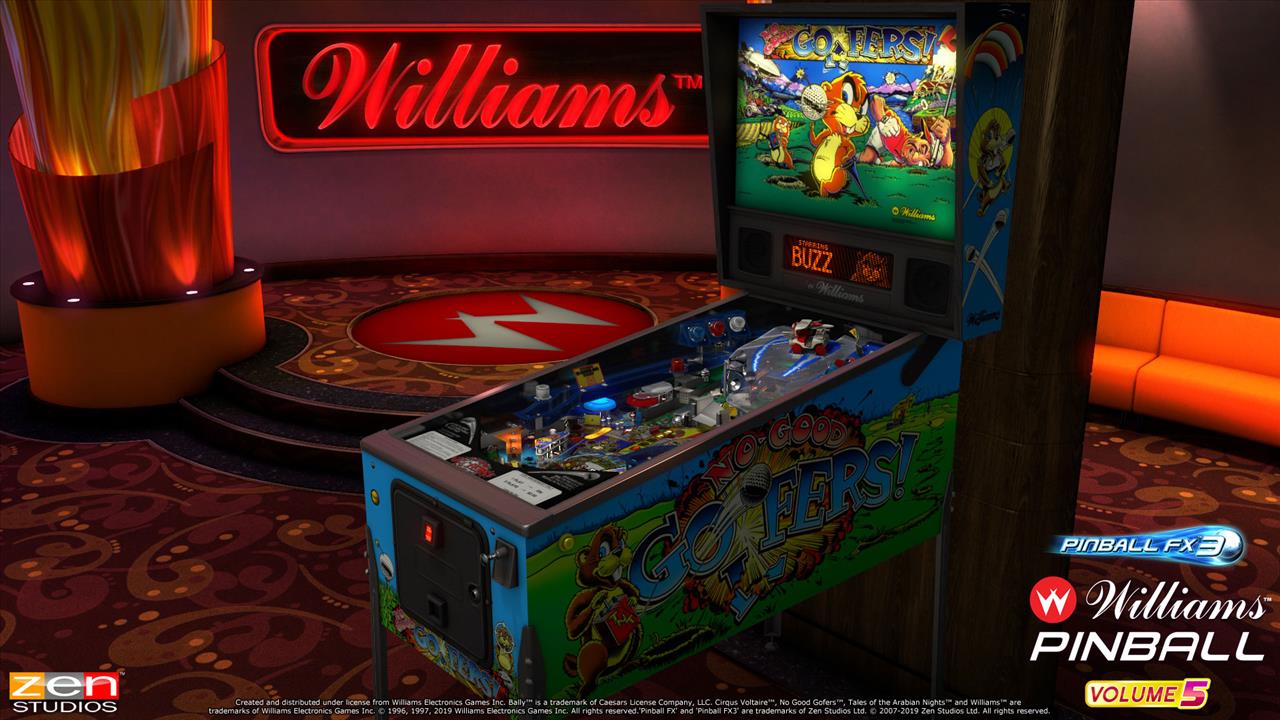 This particular pack contains two certified pinball classics, and one table that is so confounding that I had to walk away from it before it gave me a stroke.

The two classics are the afore-mentioned Cirqus Voltaire from 1997, and 1996’s Tales of the Arabian Nights. The last table – which I found absolutely unbearable – is 1997’s No Good Gofers.

No Good Gofers is a table that I have never encountered in real life – a fact that I am now pleased about. For some reason in 1997, Williams/Bally decided to design and release a table loosely based on Caddyshack. I had the toughest time with this table. There are certain table designs that simply don’t click with me, and many of them have so many ramps traps and bumpers on the top half of the table that you simply can’t keep track of where your ball is. Additionally, since the top half is so tight, I can never quite get a good rhythm going on tables like this. I can’t quite hit the correct angles, and most of the time the ball just bounces back and forth between my flippers and the middle point of the table, going faster and faster until it sinks down the drain. I memorably had similar problems with Zen’s Iron Man table back in the day, and though the table themes are wildly different, the feeling of frustration and failure is the same. Needless to say, I spent the least amount of time with No Good Gophers. 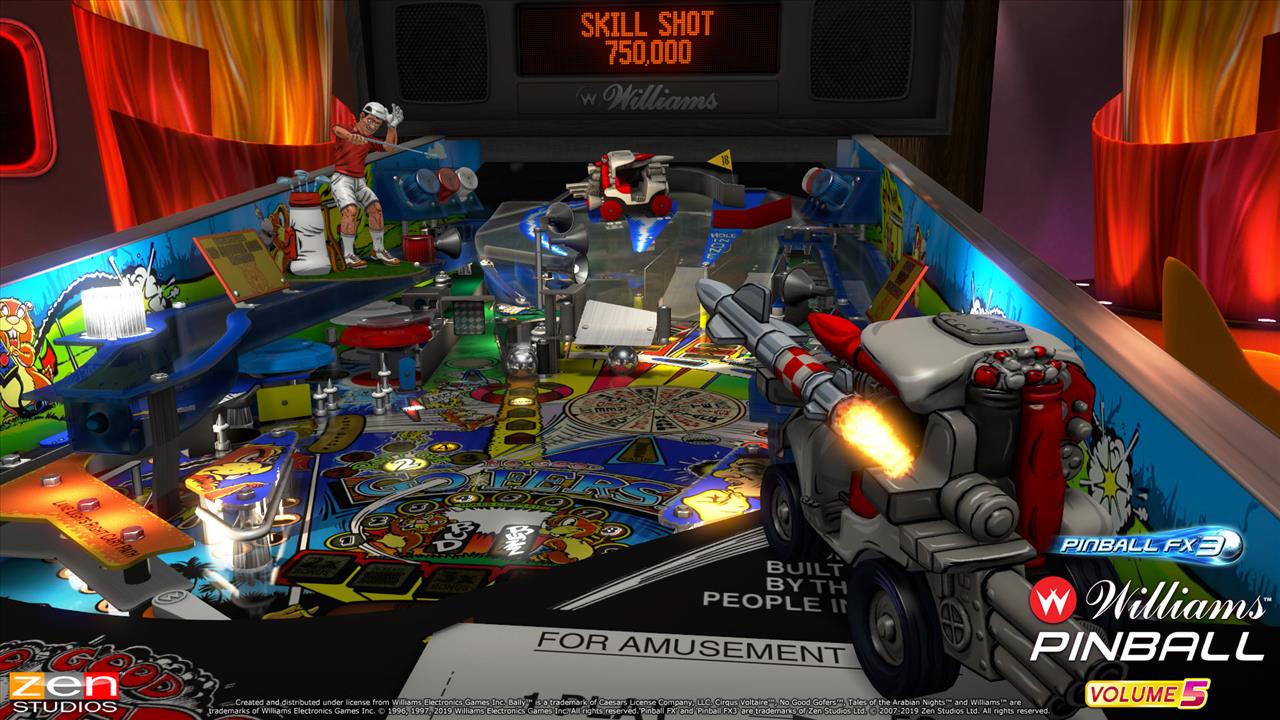 I had a much better time with the more well-known tables, Cirqus Voltaire and Tales of the Arabian Nights. Both of these tables have some stellar design elements in real-life, and more than usual I enjoyed tapping the Triangle button to toggle between the digital version of the real table, and Zen’s fantasy-enhanced versions.

Cirqus Voltaire has at its center the Ringmaster, a plastic head that pops up from the board and serves as the primary target. Zen wisely didn’t over-animate this creepy head on the table itself, instead placing an animated character lurking off to the left of the playfield, ala Deadpool.

The table has a lot of fun circus-based events you can trigger, and the mini-games that accompany them are just difficult enough that it will take players a few tries to figure out how to get past them. 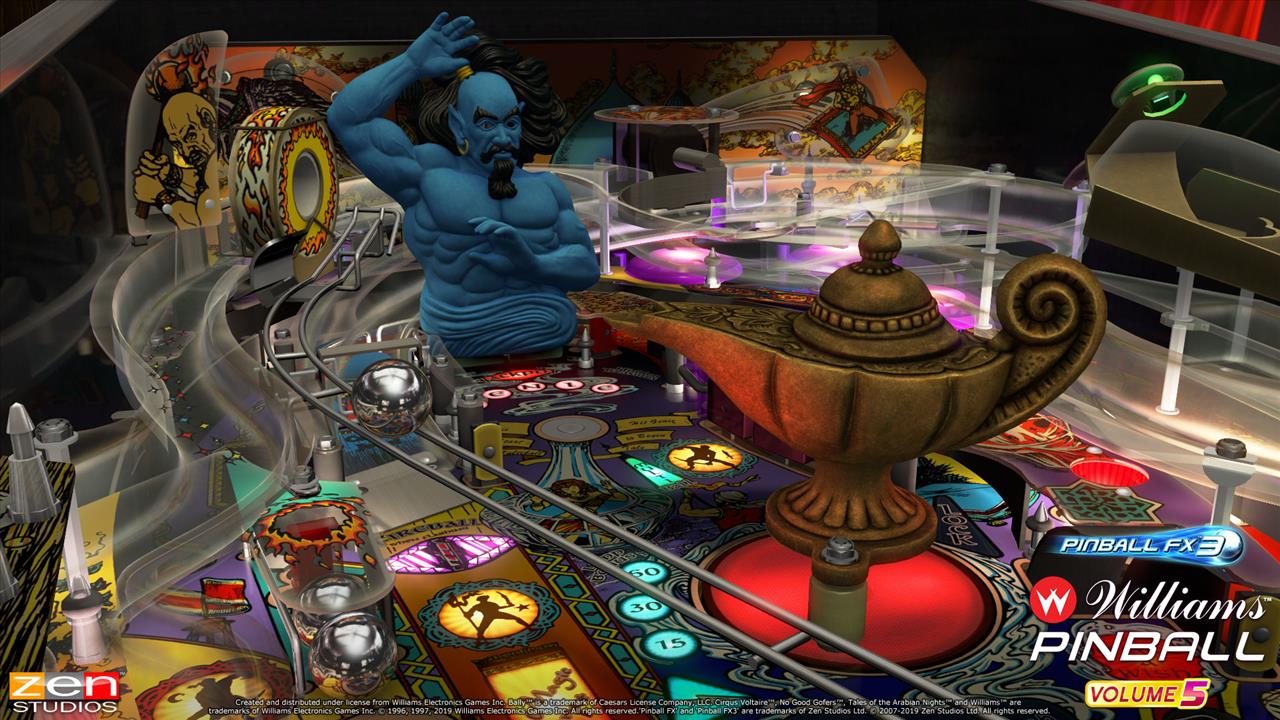 Tales of the Arabian Nights has two major centerpieces on the table, a blue genie and a lamp in the center of the table. Completing various missions will eventually allow players to free a princess from the genie’s grasp (a feat I was never able to pull off). I particularly enjoyed Zen’s animations on this tables. When you hit the lamp, it spins madly around, and when you get it flowing with a good rhythm, lightening bolts start shooting all over the table, racking up points and enhancing the general chaos.

As usual with these real-life pinball adaptations, the difficulty level is well above that of Zen’s homegrown fantasy tables. These machines were designed to gobble quarters, so keeping the ball on the table is much more challenging than what Pinball FX3 fans might be used to. But Williams fans should be right at home with the blistering punishment delivered by these classics.

I know a few guys in real life that collect pinball tables. It is an intimidating hobby – finding, restoring, warehousing and maintaining these incredibly intricate machines. For the rest of us, Pinball FX3 will continue to fill the need nicely, bringing these historic machines to life from the comfort of our sofas. Yet another quality pack just serves to reinforce the quality and care put into this platform. Pinball fans owe Zen Studios a debt of gratitude.

Williams Pinball Pack Volume 5 continues Zen Studios’ relentless adaptation of real-life pinball machines. The quality of the tables isn’t the issue here; the quality of the adaptation is what should be noted. As usual, these tables are spot on. Real-life pinball fans will love this pack, and FX3’s more casual fans might enjoy the gut check beating they endure at the hands of these classics. Recommended, as usual.