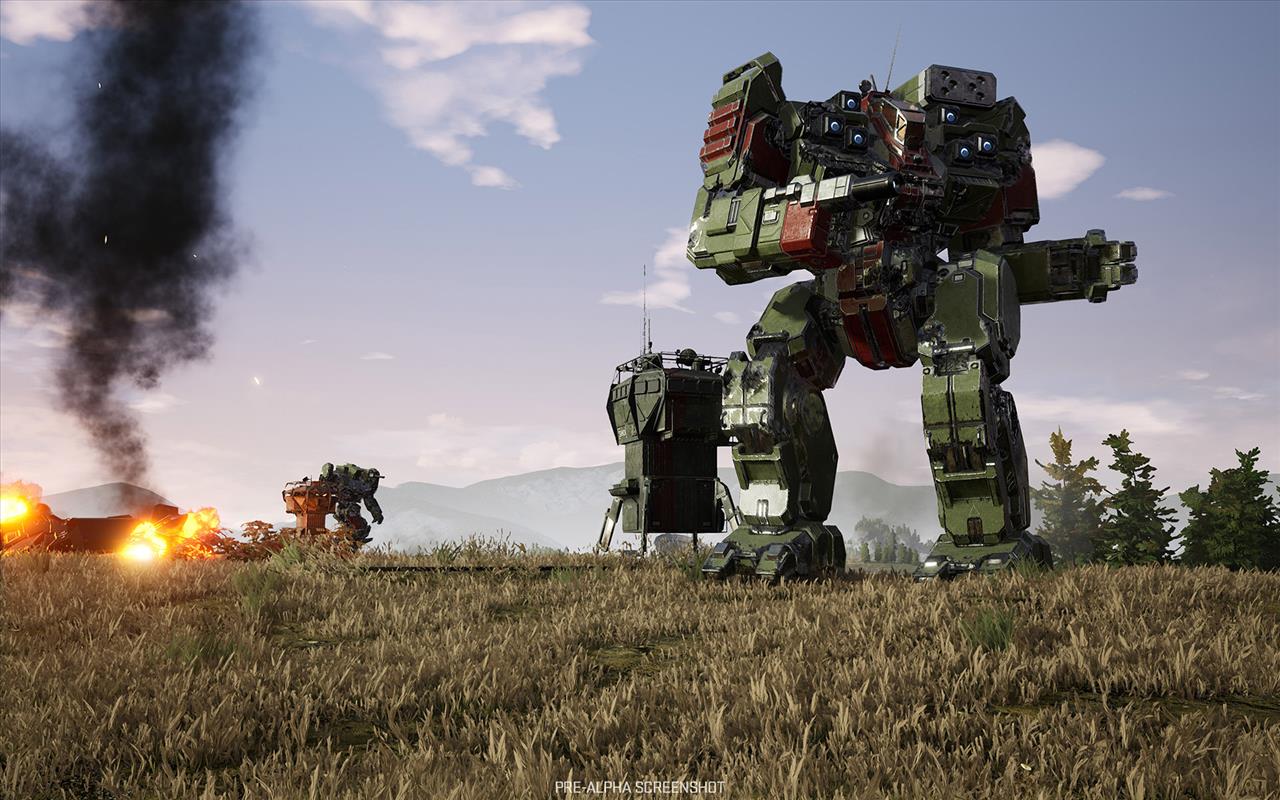 Mechwarrior 5: Mercenaries has been a long time coming. When the game was slated for release way back in 2008, it had already been six years since the previous single-player BattleTech game. Now 12 years on, Piranha Games seems damned and determined to satisfy the increasingly niche BattleTech fan base with a game that delivers on all the fronts the series is known for. This makes it a difficult review proposition for a complete BattleTech and MechWarrior novice such as myself, but hopefully I can deliver an objective assessment based on the game’s merits alone.

Mechwarrior 5: Mercenaries takes place in the year 3015, at the end of the lore-legendary Succession Wars. The galaxy has been divided up between the warring great houses of the fractured Terran Empire, which have resorted to feuding among each other in a series of proxy conflicts. These skirmishes are fought by mercenary PMCs who field BattleMechs, massive, lumbering, walking tanks fitted with small arsenals and piloted by the most skilled warriors in the galaxy.

The game follows the exploits of a rookie pilot under the tutelage of his PMC veteran father. Once he puts you through your paces on a tutorial course, learning the basics of mech movement and combat, he’s unceremoniously killed in a raid by a rival merc group. It’s up to you, the rookie, to rally the mercs under your command, pick up the pieces, and escape hostile space…all while plotting your revenge. It’s a pretty typical setup as far as plots go and I felt like it was serving the long-standing lore of the MechWarrior franchise more than the immediate game narrative. As a result, it was hard to get invested in any of the characters, but I can see how the deference to the series’ longstanding history will make fans happy. Once thing’s for sure, Piranha isn’t jettisoning the franchise’s history in some foolhardy “this ain’t your father’s MechWarrior” stunt. 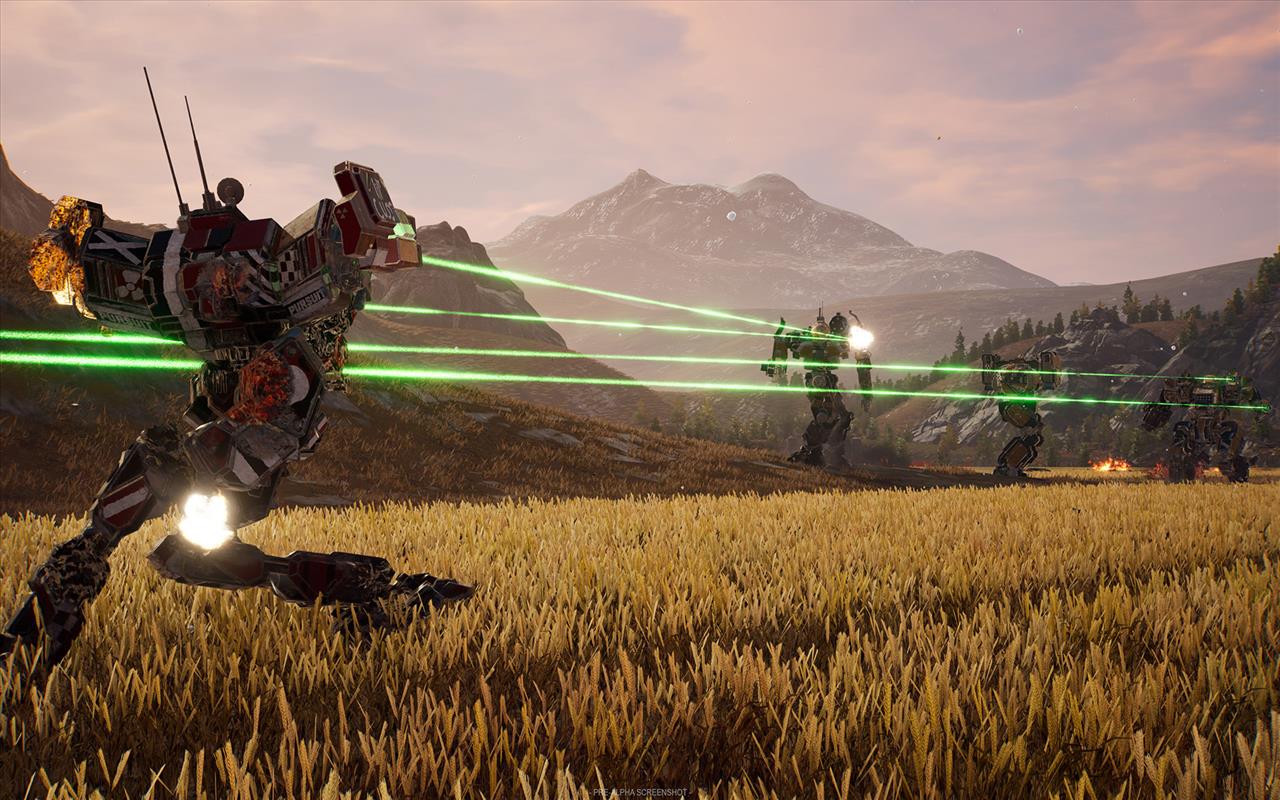 On the gameplay side, the early game is rough going. Your shiny Centurion mech gets trashed in the game’s intro, so you spend a few intro missions tromping around in a speedy but relatively puny scout mech with only some anemic laser cannons as armament. Combat is a bizarre combination of twitch action and deliberate decision-making, as you grapple with your mech’s complex controls that cover weapon management, positioning, power and temperature levels, and damage control. You can move the torso and legs of any mech independently, like a traditional tank, which makes movement a real headache early on. I’m more of a shooter fan so it really threw me that my mech’s legs would not automatically snap to the direction I was pointing; instead there are hotkeys for aligning your mech’s legs or torso. Try as I might I just never developed the muscle memory for this and it made movement a persistent chore the entire time I was playing. I’m sure it’s second nature for fans of the series, but for me it was a constant distraction.

You can tell Piranha wanted to be faithful to the series’ sim roots by making the mechs feel like big, complicated machines without overwhelming the player too much. Targeting specific body parts of enemy mechs is really about your aim rather than dedicated target locks, and the only major concern with your mech management is heat. Everything you do, from kicking up your running speed to jump-jets to firing weapons generates heat, and if your mech overheats it basically shuts down for several seconds, making you an easy target. Getting a handle on all this wasn’t too hard and I appreciated how cool and complex Piranha made the interior cockpits look, but to be honest I found this view to be little more than useless. With all the action going on and how often you’re assaulted from all angles, especially directly above by aerial vehicles, the third-person view was much more practical for situational awareness. 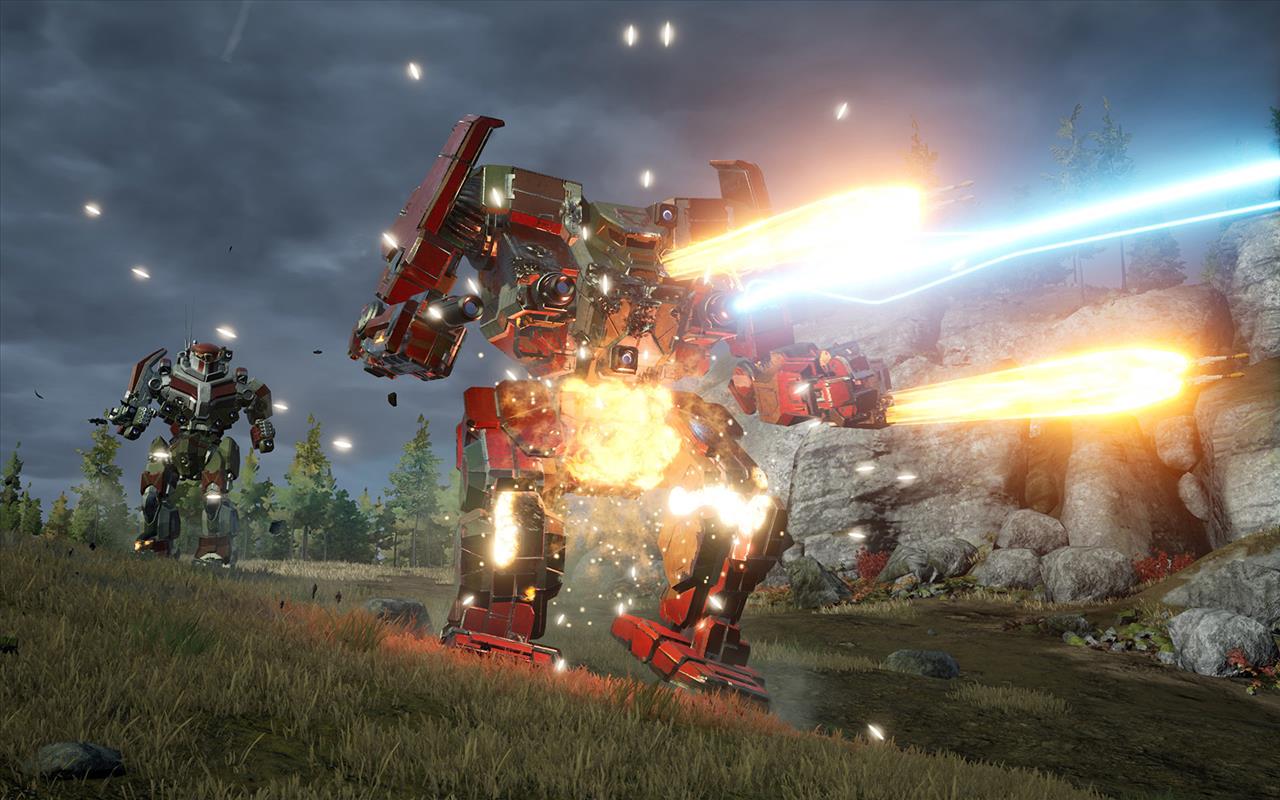 On the whole, combat is thrilling and effective but it never approaches sim perfection like the old LucasArts fighter sims of old, such as Tie Fighter. I really tried to get the hang of MechWarrior 5’s combat mechanics, but at the end of the day there were too many small issues that cropped up. Maybe it’s just my inexperience with the series and its controls, but I could never shake a distinct cumbersome, uncoordinated feeling. I know I’m piloting big, heavy walking tanks, but Mechwarrior 5’s controls and mechanics never made me feel powerful and intimidating; I usually just felt clumsy, slow and vulnerable.

Once you get out of the early game area and missions, it becomes clear what kind of game Mechwarrior 5 really is: a robust and complex management sim. It quickly shifts from “one man against the mercs” to an army-building sim that puts the likes of Metal Gear Solid: Peace Walker to shame. This is where the series lore and dynamic nature really come into play. The galaxy is a free-for-all with each of the great houses jockeying for territory, which changes the conflict and economic status of each star system on an erratic basis. After every mission you can collect your payout in salvaged parts and/or cash, but be prepared to spend most of it on the mech you busted up in said mission. Every mission, no matter how lucrative, ends with a gigantic repair invoice and bill of materials—and this was a pretty unwelcome surprise to a newcomer like me. You also have to keep an eye on your galactic reputation as a merc outfit, and eventually decide which of the great houses you pledge (financial) loyalty to. There’s no neutrality in this conflict, but what enemies you make is ultimately mitigated by the perks you get for turning in consistent work for just two or three houses. 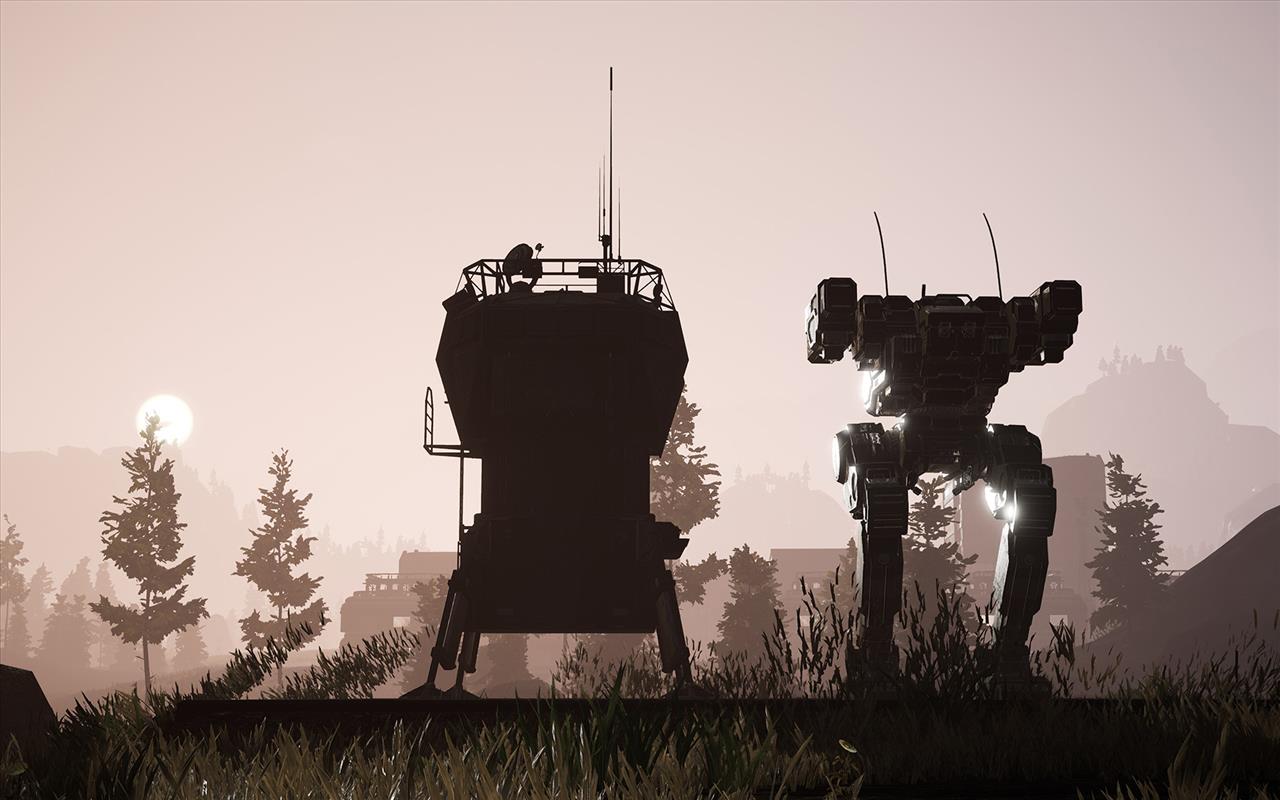 Combat quickly takes a backseat to playing the game’s economy against itself. The most common kind of game over in Mechwarrior 5 is bankruptcy for your merc unit, as you can’t very well take righteous revenge if you can’t keep the lights on or your mechs gassed up. This leads to a tricky balancing act; star systems in heavy conflict have beleaguered economies, which makes repairing your mechs a lot more expensive and time consuming. However, moving to another star system requires that you hire passage on an FTL-capable capital ship, and every one of these space Uber rides costs a small fortune. What’s more, every time to you buy parts or repairs in a quiet system, you steadily deplete the local economy of the materials and weapons you need, driving prices up.

As the game progresses you can hire new pilots and buy new mechs, or if you’re particularly savvy, gank one after a skirmish (the game helpfully alerts you when rare or valuable mechs pop up in optional missions). This lets you build up an entire regiment of Hammer’s Slammers, which of course require their own sub-level of management. If you pair the wrong pilot specialist with the wrong class of mech, they’re going to get smashed to pieces nine times out of 10. Cultivate your pilots and mechs well, and you can assemble a customized four-mech fireteam for any mission type, which, let me tell you, makes combat much less of a headache. That said, partner AI is overall pretty lackluster, and I can imagine when the game’s servers go live it’s going to be a lot more fun and much smoother going with three human teammates in co-op. 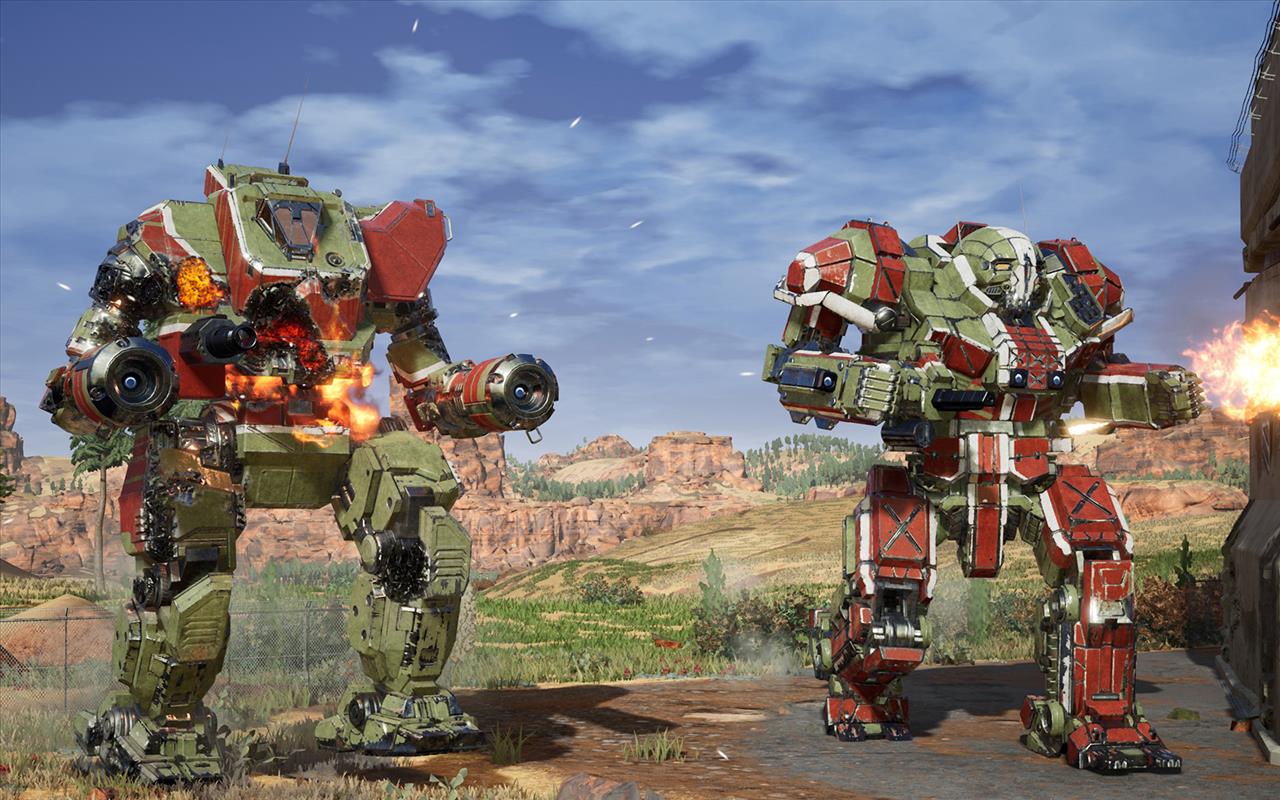 That said, MechWarrior 5’s gameplay loop  gets to the point where it feels like the combat becomes secondary to running the merc business. If all this macro-and-micro-management is making you salivate then congratulations, you’re probably a longstanding MechWarrior fan and MechWarrior 5 will probably be right up your alley. But to me, an old hand at vehicle combat sims, it felt like a giant distraction. I wanted more deliberate, nuanced control of the mechs, a level of aptitude that would make me feel truly dangerous once I’d put in the time to integrate the systems and controls of each mech class. MechWarrior 5 feels like it’s more about staying in the black, and just how strongly you can stack the deck in your favor before every combat encounter.

I don’t want to criticize MechWarrior 5 too harshly, because maybe it’s just not the sort of game for me, and that’s fine. Where were legitimate moments that felt pretty cool. I got serious Pacific Rim vibes every time my mech rotated down and out of the hangar bay to begin a new mission. But once I got into combat with enemy units, that feeling of intimidation and power just evaporated into the clunky controls, and the persistent nagging thought of “this is going to be so freaking expensive, if I even make it back in one piece.” 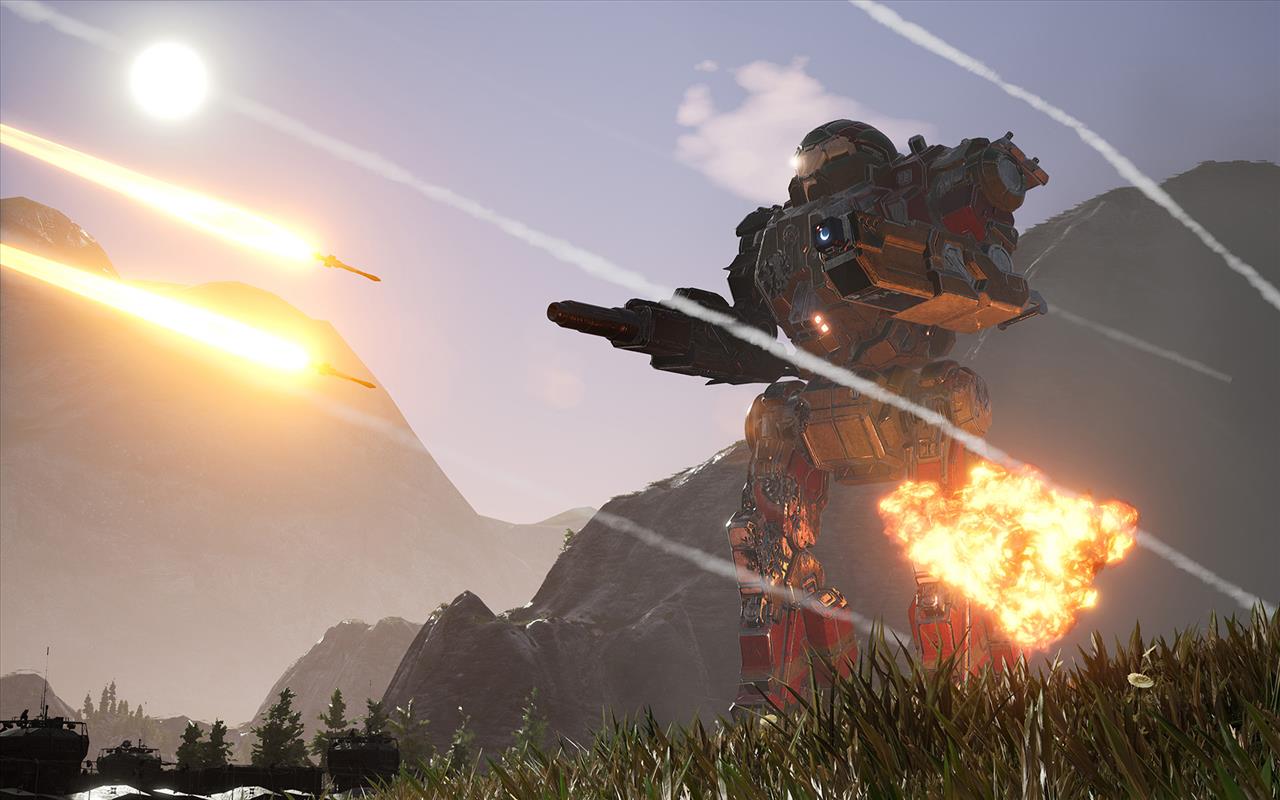 It’s tough to make a concrete value judgement on this game because it is a niche property with a loyal fan base, but there are annoying little issues plaguing it from top to bottom. The visuals are at times stunning and the environmental destruction is eminently satisfying…until you realize that smashing through buildings tears the ever-loving hell out of your armor, and so the most cathartic, indulgent destruction is better off avoided. The story is layered, complex and quite lengthy, but with the exception of the talented Elias Toufexis, the voice acting is thoroughly wooden, and the musical score vacillates from competent during management, to fairly generic distorted electric guitars during combat. Stomping through a pine forest with your mech bros is a pretty amazing feeling, until you’re ambushed by a team of enemy mechs and the game’s barely competent friendly AI becomes painfully obvious.

I can definitely recommend MechWarrior 5 to the hardest of the hardcore who have been waiting since 2002 for a new single-player entry into their favorite series. For everyone else, I’d recommend waiting for a sale. MechWarrior 5 has a metric ton of raw content, but I feel like some DLC and fine-tuning is needed before it really shines.

Mechwarrior 5: Mercenaries brings back most of the combat and management the series is known for. Your mileage may vary on just how satisfying that is, but in objective terms there are a number of small issues—from AI to graphics—that add up and keep this game from its full potential.