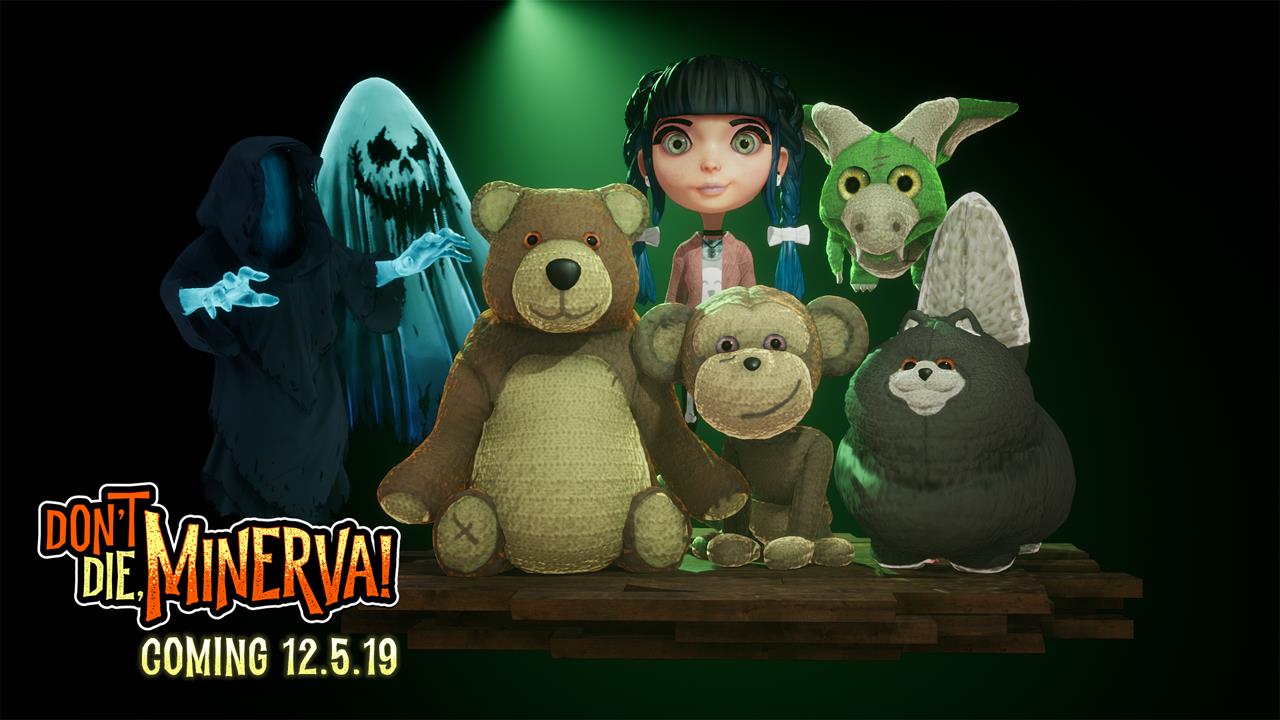 Ah, Shallow Grave—sorry, sorry, Shallow Grove. Slip of the tongue. A lovely compound comprised of a few creepy old buildings with an innocuous fountain in the center and suspiciously empty courtyards scattered around. What haunted property would be complete without strange sigils and skulls on all but one door? How could you call yourself a respectable homeowner without a creaky iron gate that swings shut behind any unlucky children that happen to wander in? What are we doing here, you might ask?

No, really. What are we doing here?

In Don’t Die, Minerva!, we play as the titular Minerva, a young girl who is excellent at not noticing that she’s been separated from her parents until she wanders into, and is subsequently locked into, the property of Shallow Grove. At least, that’s what I can glean from her only intro lines. Somehow, this girl managed to get herself into a spooky area in the middle of the night, looking like she’s just hopped off the school bus with her backpack, wander into an abandoned-looking property, cross the gate threshold, get locked in, act like she’s suddenly lost her parents (and if she had been with her parents earlier, how did she not notice losing them?) and then say that she thinks she’s lost?

I truly admire the gall of this girl—just enough gall to, dare I say, navigate a procedurally-generated haunted house at the command of a headless ghost named Mr. Butterworth.

In this spooky rogue-lite, we’re tasked by the aforementioned Mr. Butterworth—who is actually, all things considered, quite kind and understanding to this delightfully stubborn girl—to navigate each floor of the haunted house and bring back Essence Crystals, which we can then use as currency. Mr. Butterworth pulls a classic no-time-to-explain here (or maybe he just thinks that any explanation as to why we’re here and why we need to fight off ghosties and ghoulies will sail straight over sweet Minerva’s head). He knows our name, says he can help us survive but needs crystals in exchange, and that the “master’s” pets hate intruders.

Dear Minerva, of course, takes this in stride and takes the magic elevator down to the first floor, where she finds a weaponized stuffed monkey in a purple gift box—and just like that, we’ve nailed down the vibe for this game before we’ve even seen the first enemy. 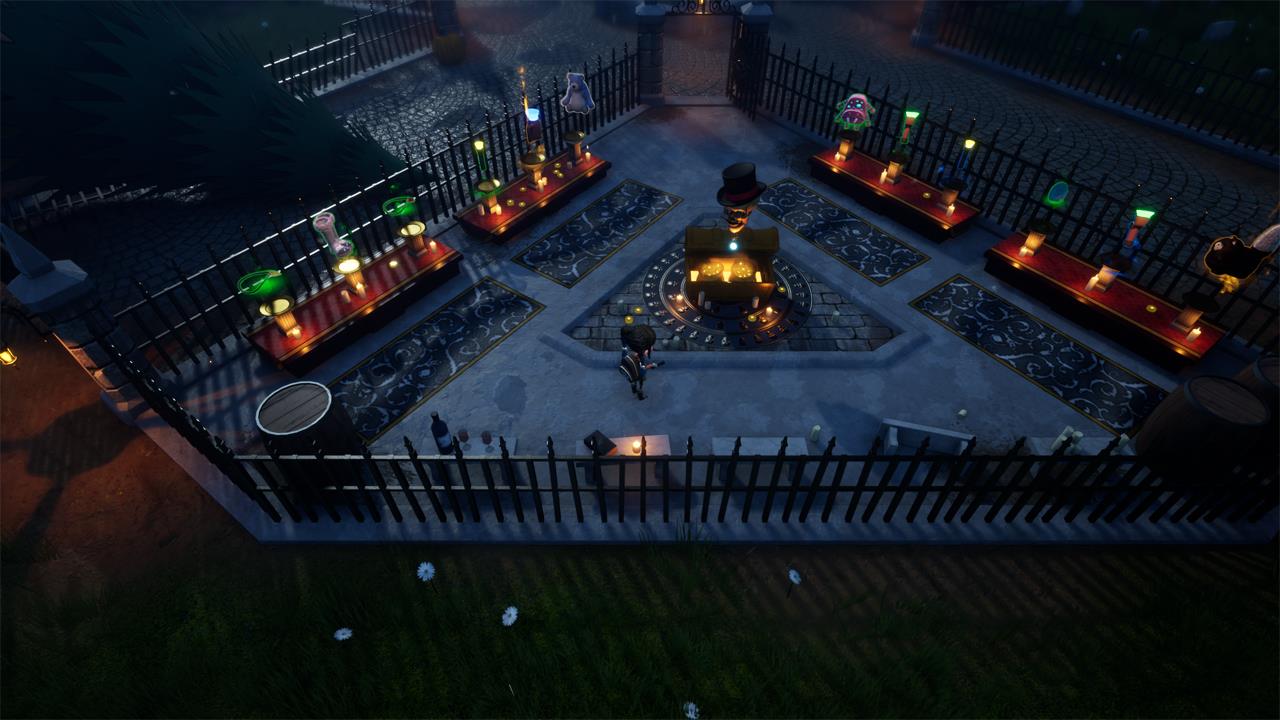 I hit some stumbling blocks with the controls early on—namely, that some of the buttons while playing on keyboard don’t at all do what they say they do, and some custom mapping is necessary—but once I got past that we were good to go. The elevator opens up into a procedurally generated mansion packed full of ghosts, and once the plucky Halloween music kicked in I threw down my monkey for some good AoE attacks and—

I died almost immediately. Turns out jamming out to those sweet tunes wasn’t really conducive to my hand-eye coordination.

After a few more cycles of zero progress (partially because of the dope music, and partially because I haven’t played a PC game in months), I decided to bump the difficulty down to easy, and we were back in business. To his credit, Mr. Butterworth—who was very insistent that Minerva shouldn’t die—didn’t seem overly fazed by Minerva dying, since he seemed to be aware that we always respawn right at the front gate again and again with an empty backpack and coin purse, but otherwise no worse for wear. The only real punishment for dying is the fact that I always start over again from Level 1, even if I’d progressed through multiple levels (including end rooms that I had initially assumed were save points—oh, what a fool I was).

My anti-specter weapons were all of the stuffed variety (aside from what I can only guess is a killer flashlight?), and all with different functionalities. I started out with the monkey by default, a fearsome stationary ally who hurls bananas at any who dare roam into its range. My second weapon was the cat, a yowling ball of heat-seeking fury that headbutted my foes into submission (and my personal favorite). Then came the dragon, which...I’m not quite sure how the dragon worked, and since this game is pretty light on the tutorials I ended up scrapping the dragon. (RIP, Sir Scorch, you will be missed.) On one of my subsequent lives I acquired the bear, whose AoE attack functions eerily similarly to Donkey Kong’s down special in Super Smash Bros Ultimate. 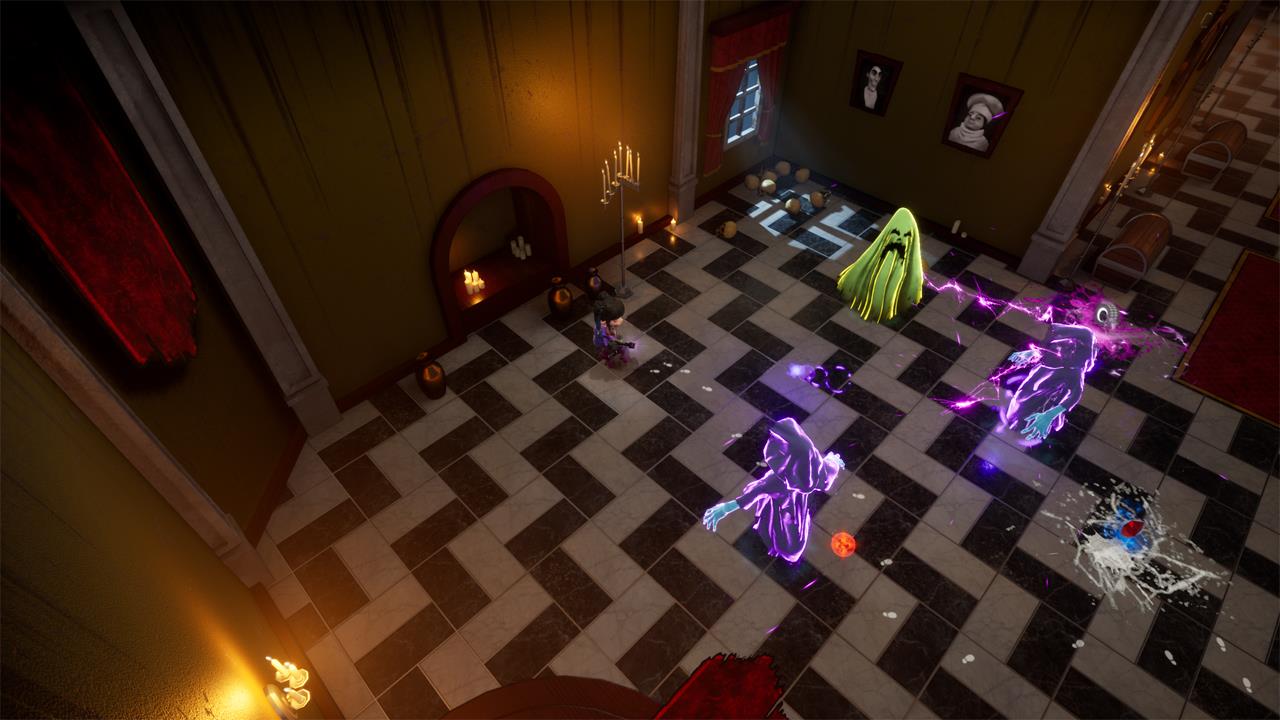 Of course, this isn’t a rigid order (especially since every time you die you lose everything and start out with your good old friend, the monkey). After all, it’s a procedurally generated game in loot as well as layout. As you progress, you can find items scattered throughout chests (anything from stuffed weapons to armor to crystals) as well as purchasing them from a shop. Each item can be enhanced with crystals that imbue the object with elemental effects and attack bonuses that vary depending on the crystal.

For all his cordialness, Mr. Butterworth didn’t really tell me what I was looking for on each floor of the mansion aside from a fountain and some crystals. He also didn’t tell me that I would need to find boss rooms to unlock the key to the exit. All I could confidently expect was that there would be an exit room somewhere. There seemed to be a chance on each floor for a bonus treasure chest room, which I stumbled upon by accident and promptly worried that I’d missed bonus rooms on all the previous floors. The fountain was a mystery at first; when I found the first exit elevator room, Minerva so kindly reminded me that Mr. Butterworth told her to find a fountain first—to what end, I still didn’t really know, but such is life. I skipped off to find the fountain room.

Dear Mr. Butterworth neglected to mention that the fountain room would be lit entirely crimson, have bars on the floor with glowing chasms below, have candles and candelabras scattered about, and just in general look like the parlor of the devil’s mansion—oh, and that the fountain has blood instead of water. (This girl is what, an elementary schooler? Come on, Mr. Butterworth, age appropriate.) This fountain is apparently a portal to a strange, crimson-lit version of the front courtyard, which contains the game’s shop as well as Mr. Butterworth himself. Each level has one fountain room, so Minerva has the chance once per level to spend her essence crystals to get buffs and bonuses, as well as spend her coins at the shop for physical items.

Aside from dealing with the shock of being thrust into a literal hell after dealing with rooms upon rooms of cutesy ghosts and plucky combat music, the game itself has a very intuitive progression. Enter level, navigate random rooms, fight elites, get key, find fountain, find exit (with some loot peppered in there for variety). It felt a little weird to be playing a Halloween game in December, but once I got the hang of it (and bumped the difficulty down) it was a fun, fast-paced experience. The game doesn’t take itself too seriously, which I think works in its favor. Of course, being an Early Access title, tweaks are needed; the keyboard controls need a little nudge in the right direction, and I would love some more variety in that bouncy spook-tunes soundtrack they have going on. Admittedly, Minerva’s not going to win any storytelling awards, but nonetheless I’m excited to see where she ends up going from here.