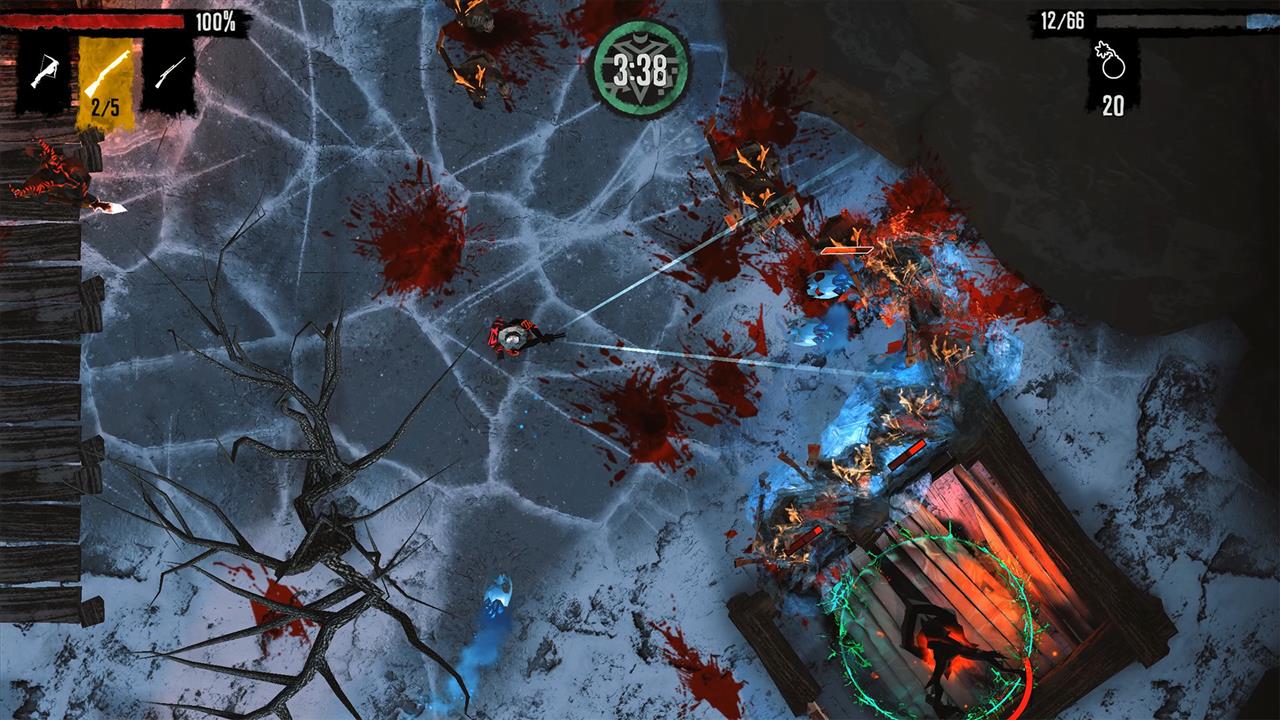 Difficulty must be a difficult thing to gauge as a video game developer. If you make a game too easy, players will blow right through it, possibly decreeing the game “boring.” Too difficult, and players will bounce off the game in frustration. Finding just the right balance that will maintain enough challenge to keep players interested without infuriating them must be a tough proposition.

Ritual: Crown of Horns, the new top-down shooter from Polish dev team Draw Distance walks the difficulty line right on the edge between “this is hard enough that I have to try a few times to get through a level” and “screw this game, I’m going home.” While I never got frustrated enough to put the game down for good, I did have to take a few sanity breaks during my playthrough.

Ritual is a top-down horde shooter. This is normally the spot in the review where I compare Ritual to a well-known game to give readers a point of reference, but there really isn’t another game that I can point to. Crown of Horns is one-of-a-kind. And I’m not entirely sure if that is a good or a bad thing.

Players take on the role of a sturdy Marlboro Man-type in an alternate universe. Our squinting hero has been hired by the government to kill a witch that has been stirring up problems. Stuff happens, betrayals take place, tables are turned, and before you know it the witch is resurrecting the cowboy and requesting that he accompany her on a mission of revenge against the government.

Right out of the gate, the witch and the cowboy work together on clearing a map to use as a hub. The witch hangs out in the middle of the map, “concentrating” on casting a spell for a specified amount of town (a countdown clock is always on screen). Waves of undead attack from all sides, attempting to get to the witch. The cowboy fights them off by shooting at them with a pistol and a shotgun. If the baddies get to the witch or the cowboy, they do damage, and if too much damage is taken by either party, the level ends and the player must start over. If the player manages to keep everyone alive to the end of the countdown, the witch unleashes a small nuke and wipes all the leftover baddies of the screen—and the player can move forward.

This first level is a microcosm for the rest of the game, both in that the entire game follows this same basic structure, and in that the level is ludicrously difficult. Enemies swarm from all sides, and with just the slightest lapse of concentration, players will find themselves surrounded. I died twice in my attempts to clear out the hub before finally succeeding in my third try. Ritual: Crown of Horns's willingness to immediately smack me in the face was startling. 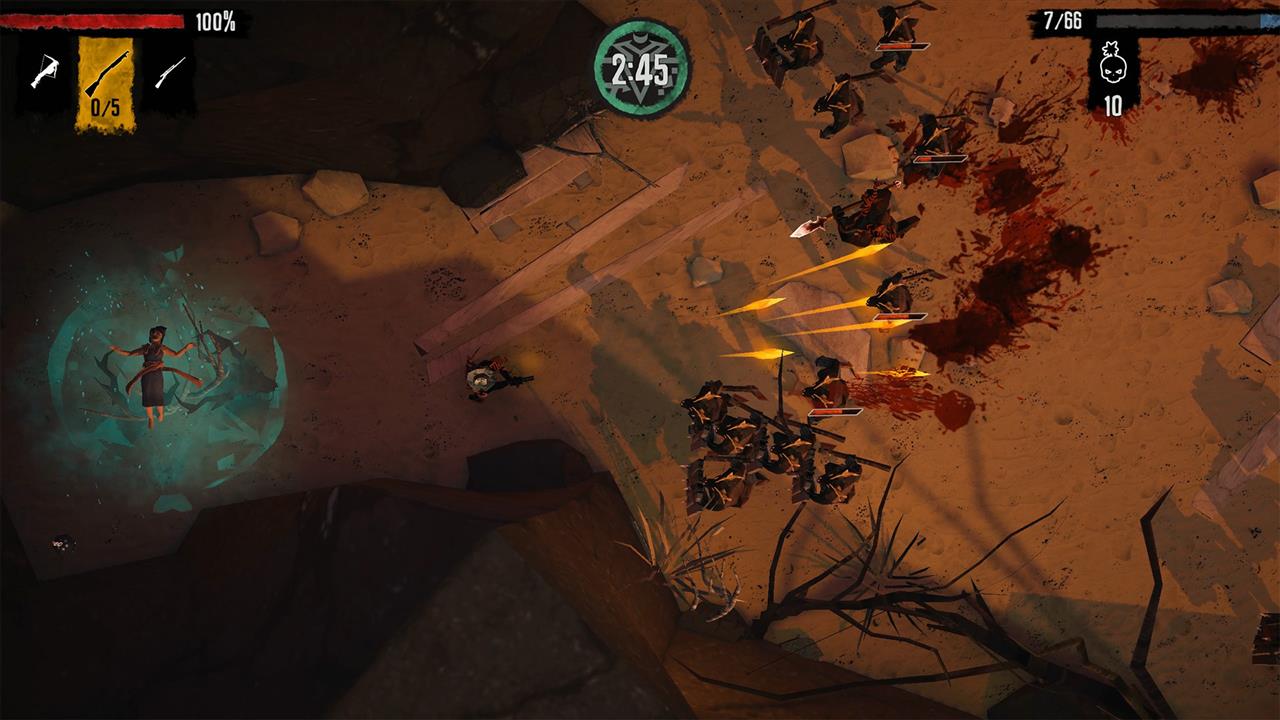 Of course, things don’t get much easier from there. After gaining control of the hub area, players gain access to a map where they can slowly unlock and select missions. Each of these missions follows the same basic formula: protect the witch and kill the baddies. Sure, the player gets a little stronger, but so do the bad guys. If you play even one level, you will have a pretty clear idea what Ritual: Crown of Horns is all about. Many of the early missions reward the player by unlocking new allies, each of which appears as a vendor in the hub. From these vendors, players can unlock a variety of weapons, spells and upgrades. In all likelihood, players won’t be able to afford these items when they unlock, which leads to a lot of replaying of older levels, farming for currency. Purchasing a bunch of goodies does not make Ritual: Crown of Horns any easier, however. This is simply not that game. The difficulty ramps up with each successive level and it quickly becomes clear that if you aren’t willing to grind a bit for upgrades then you aren’t going to be playing this game. 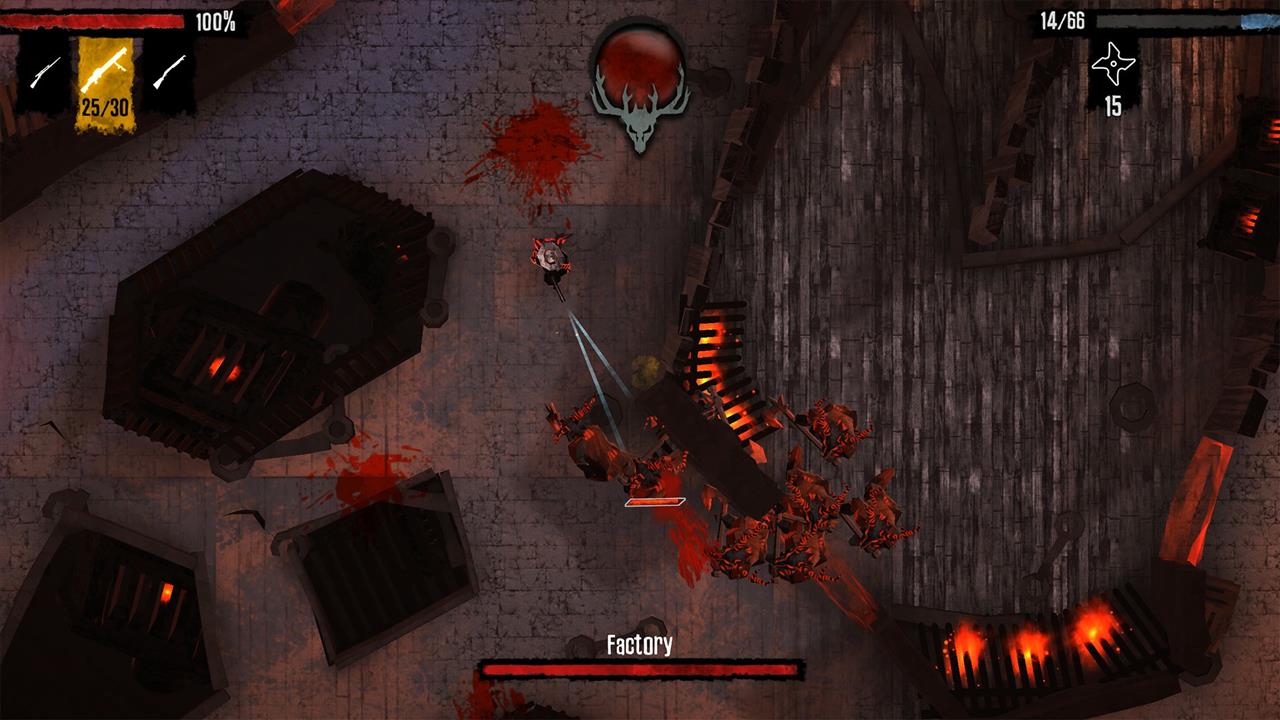 Controls are a mixed bag. They work well, but they are wildly complicated. For a game that seems as simple as Ritual does, the control scheme is convoluted beyond reason. You can have up to three weapons equipped at a time, which you can cycle through with the R1 and L1 buttons. Additionally, you can have three spells mapped to three of the face buttons (with the last reserved for your dash move). While you are juggling all of this, you must move your little guy with the left stick, while selecting which way you are facing with the right stick. On top of that, you also have to use the auto-aim on L2—some of your weapons won’t fire without it. And then, finally, you shoot with the R2 button.

If you are thinking, “That sounds like a lot,” well, yeah, it is. Enemies are constantly encroaching from every direction, and the player must constantly move to keep from being overwhelmed. There are so many things to keep track of during a round of Ritual that I often forgot that I had spells at my disposal, or I would forget that I could change weapons. Then next thing I knew, I was staring at the “start over” screen for the umpteenth time. 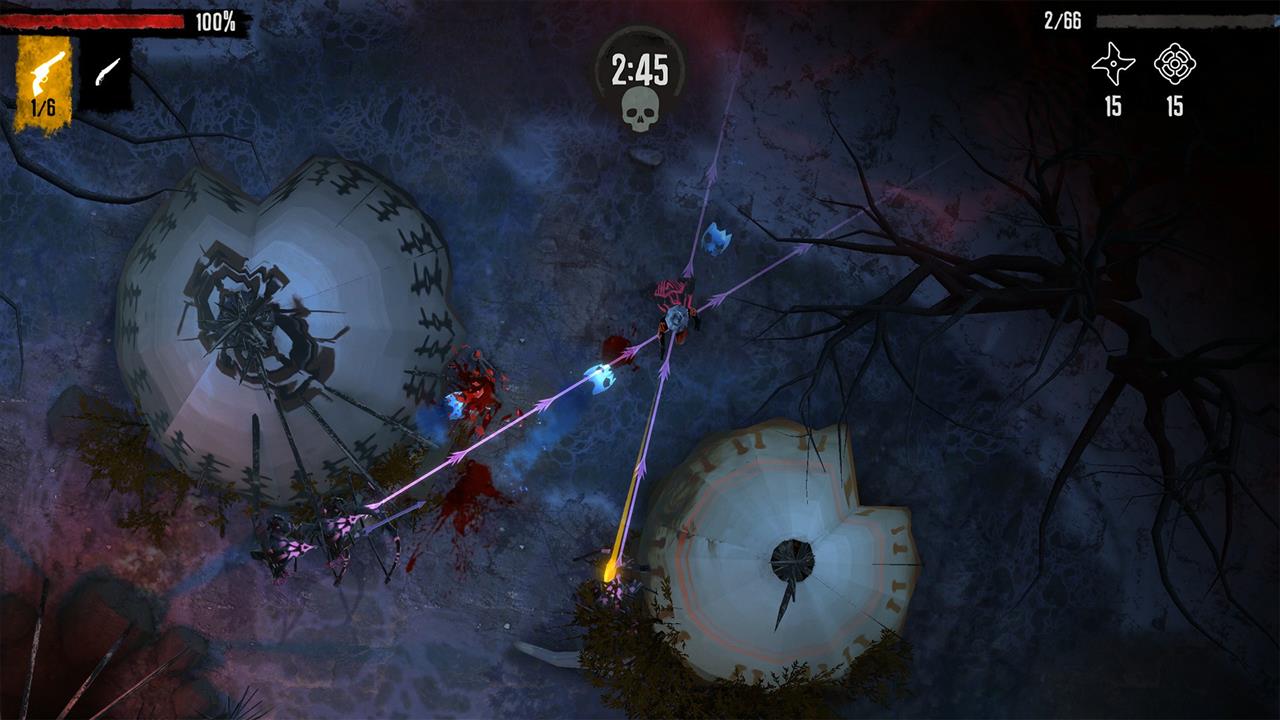 It must also be noted that Ritual: Crown of Horns really doesn’t work so well in handheld mode. The game functions just fine, but the tiny characters and enemies can easily be lost on the Switch’s smaller screen. Additionally, Ritual suffers from that overly prevalent video game disease: the needlessly tiny font. Playing in handheld pretty much just made me mad.

The game fares far better when played on a nice big TV, where players can get a better look at the rather nice artwork (and read the dialogue). I can’t say that everyone will have the same experience, but my old man eyes certainly felt a lot better when I gave up and played Ritual on the big screen. 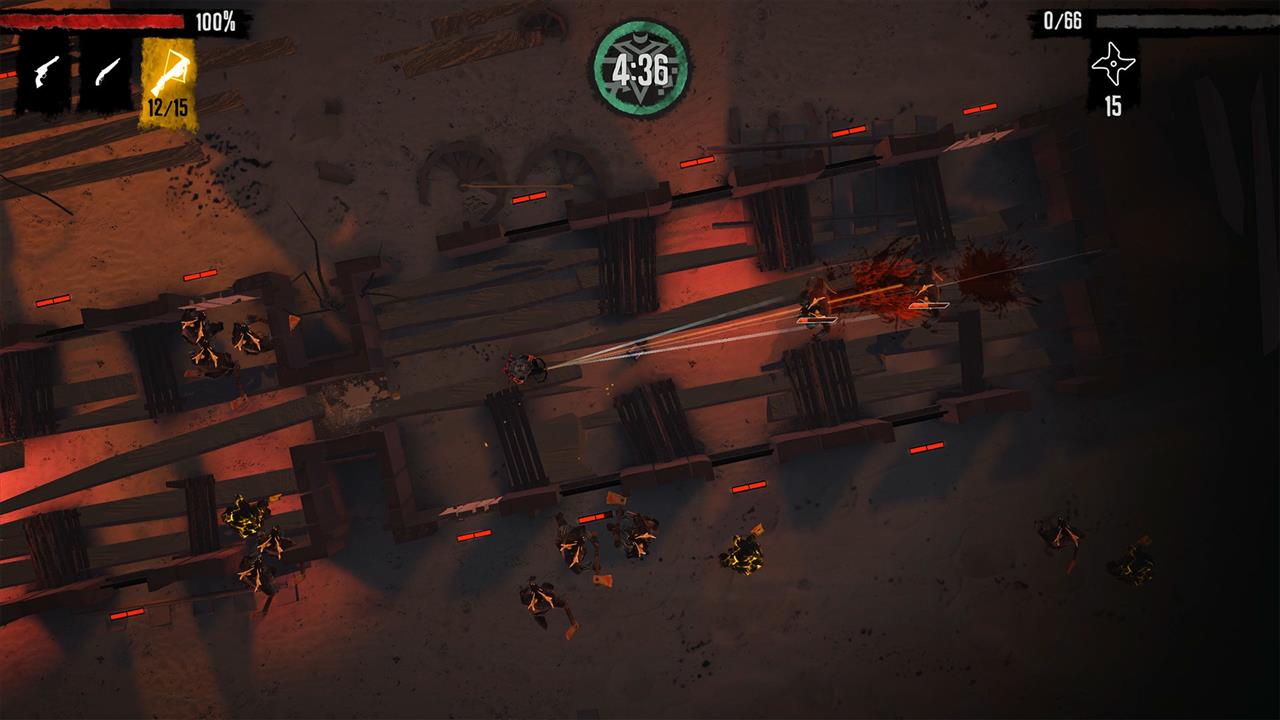 I did enjoy Ritual's strange supernatural world and humorous writing. I would love to recommend Ritual, because many aspects of the game are actually pretty cool (the music, for example, is great). But most players will likely find the frustration level eventually gets so high that they discontinue playing. It just feels as though the game got lost a little while fine-tuning the difficulty. If there were a way to turn down that pervasive difficulty, I would have likely enjoyed the game far more.

I know that some players really enjoy being challenged. But in this case, complicated controls mixed with relentless difficulty, combined with power-ups that don’t feel terribly powerful, all add up to a game filled with cool ideas that could be a lot of fun, but instead just left me feeling tired and defeated.

While interesting and certainly unique, Ritual: Crown of Thorns wears down the player with relentlessly punishing difficulty. While the concept and story are a hoot, in the end the gameplay can't sustain interest. Instead of feeling rewarded by advancing to new levels, players must often backtrack and play previous difficulty levels repeatedly. Frankly, there are just too many other ways that I would rather be spending my time.