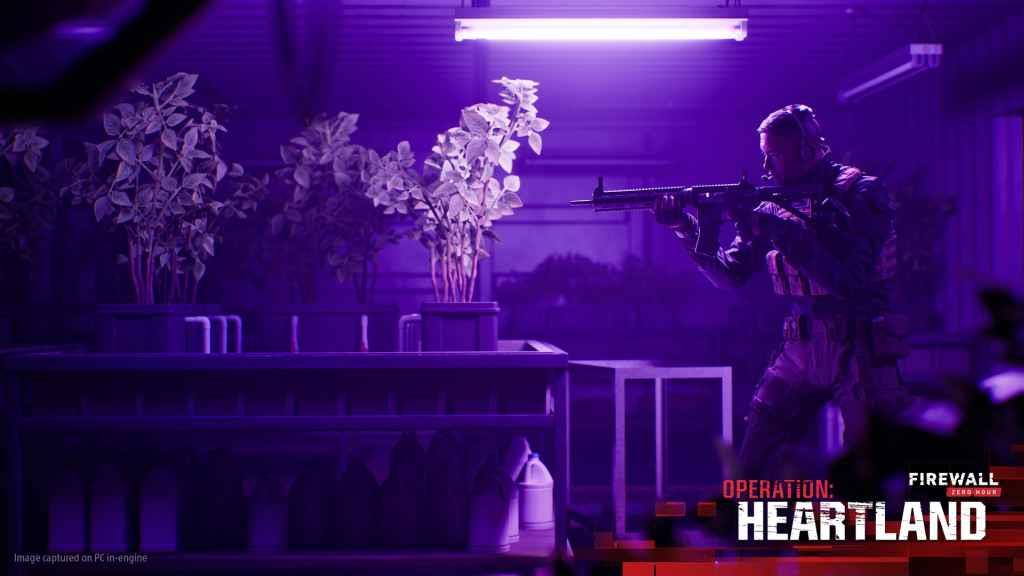 When Firewall: Zero Hour released back in September of 2018, it felt like a revelation. In my 9.5 review for Gaming Nexus, I said “Firewall: Zero Hour is a game that will bring a large segment of gamers to the PlayStation VR that might have otherwise never considered the device worth their time or money. The fact that a dedicated community has sprung up around the game carries enormous weight. These folks are excited about Firewall for good reason. This is the game that signifies the maturity of PSVR as a platform. This might be a lot of weight to put on the shoulders of a military shooter, but Firewall is up to the task. This is one hell of a game.”

It turns out that I was right. Over the past year, multiplayer games have arrived on PSVR and fallen by the wayside one after the other. No matter how intriguing a game is, after a week or two the lobbies are empty, the community is gone. Why? Because everyone is playing Firewall.

After more than a year away from Firewall: Zero Hour, I dropped back in on the game to check out the latest season – Operation Heartland. I was shocked to find that not only were tons of people still playing this game, but I was surrounded by noobs. Now, I’ve been away so long and am low enough level to be considered a noob myself. But the point is, there were enough other noobs playing that I could be teamed with six or seven of them for four v. four matches (with a couple of more experienced players thrown in for good measure). The fact that there are so many low-level players entering the game a year after it’s release speaks to the size and scope of Firewall’s community. People love this game.

Not only is the Firewall community robust, they are also incredibly cool. The fact that the team at First Contact Entertainment designed Firewall's play to encourage chat between teammates automatically excludes players from speaking with those on opposing teams – effectively cutting smack talk down to nonexistent levels.

In general, I find the maturity level of players to be higher than that found in many other online communities. Players seem to mostly be enthusiastic guys – many of them obviously military or ex-military – who understand the value of teamwork and are happy to help teach newcomers the ropes.

I’ll be frank – I am fairly terrible at FPS shooters, but though communication and teamwork I am able to find some success in Firewall. Even when you are gunned down quickly, you can still help the team, and that makes all the difference in the world. I played for five hours the other day, and every person I teamed with was happy to be playing and encouraging – even when we went on a five-match losing streak. These players are nice people that I wanted to hang out with, which is almost unheard of for people like me that shy away from online play and typically mute chat.

Coming back to Firewall after 14 months of updates, I find that the core game is largely unchanged – there is just more of it. More maps, more characters to choose from, more weapons, more mods. The entire game is now positively swollen with content – though a bit of it is hidden behind a paywall, which wasn’t the case when the game released. It’s no big deal, but there are some characters (known as contractors) that you have to unlock with real-world cash if you are interested – though there are really more than enough characters included with the core game, so these pay-to-play additions are likely only for the super hardcore. 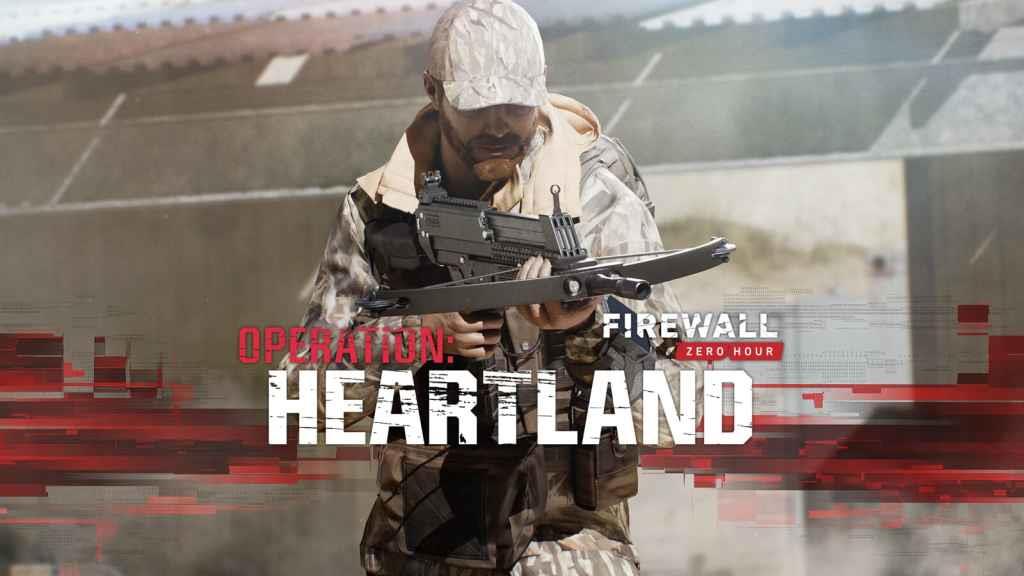 For the uninitiated, Firewall is, at its core, a four on four strategic military shooter. Firewall matchmakes players into teams of four, which are then pitted against each other on a variety of maps. One team plays defense, protecting the McGuffin (a laptop full of…data and…stuff). The other team plays offense, attempting to get at the laptop and pull downloaded data from it. There are a number of different characters to choose from, with a few more that can be unlocked after achieving certain levels. Each character has their own “perk”; quiet movement, faster reloads, less bullet damage, that sort of thing. Maps are randomized, and with a year’s worth of updates, it’ll likely be a while before you land on the same match twice.

Luckily, one thing that has been added into the game over the last year is a single player mode. While ludicrously easy compared with multiplayer, single player is still a great way to get in and learn the maps a little bit.

The latest seasonal update – Operation: Heartland – grows the game even further. There are two new free maps – though only one is immediately available. The Prepper map is set in a doomsday prepper’s underground bunker in an Arizona desert. This bunker is now the site of the lobby when you log in, and it was recently hilariously decorated for Halloween. On November 26, the other new map drops. The Gauntlet map will be set in a training ground in Virginia. 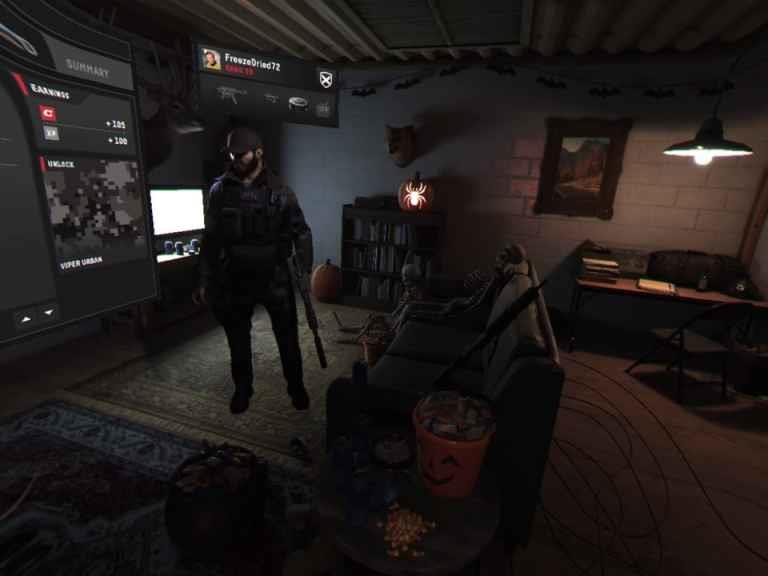 There are also two new contractors, following the same release schedule. The first guy – Bear – is available now, and I played with him exclusively during my recent sessions. Bear is a hunter and marksman. His special skill “Hunter” removes the red chevron from above his head, making him harder for enemies to spot and track. The other guy – Dom – isn’t out yet, so I don’t have too much info on him.

I did immediately unlock Bear’s TC1 crossbow though, and that thing is baller. Holding five bolts at a time, the TC1 is a great stealth weapon for newbies like me that want to take dudes down without attracting too much attention. Firing the TC1 is almost silent, and I was able to shoot around corners, taking down guys in a way that probably left them with no idea what hit them. Deeply satisfying. I wasted no time covering this crossbow in festive seasonal pumpkin paint, which was also deeply satisfying. 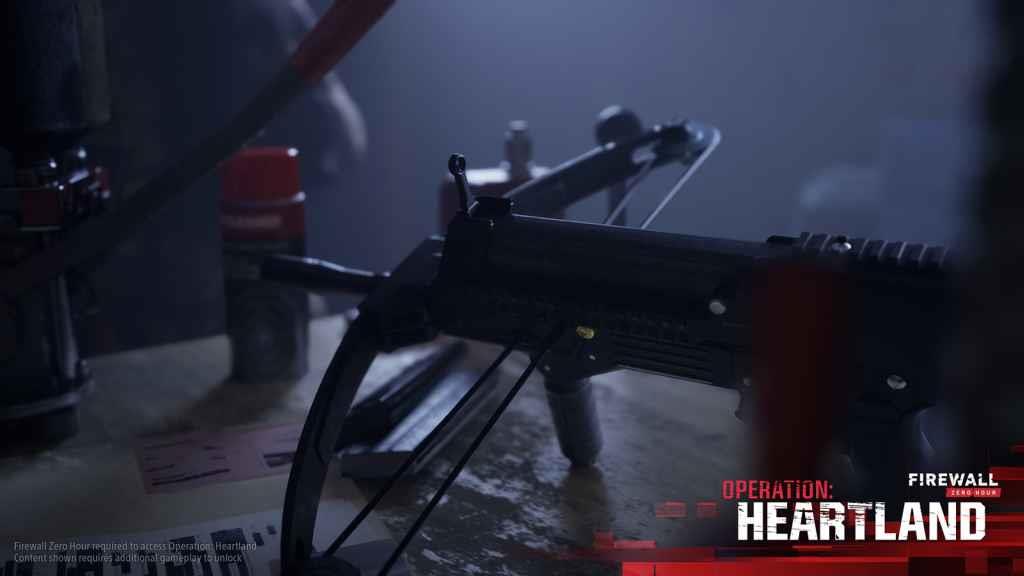 There are all sorts of other cosmetic rewards that are being rolled out over the season. Most of these are acquired via “Operational Missions” - a series of objectives that can be completed in regular play (get six takedowns on this map, take down 10 guys with a shotgun, stuff like that). There is typically one “free” mission available at all times, and the rest must be unlocked via the $29.99 Ops Pass. Once you have the Operational Missions unlocked, you can either beat them through play, or instantly unlock the cosmetic items via “Hack Keys”. You get 25 Hack Keys with the purchase of the Ops Pass, or you can grab five of them for five bucks. It’s important to note though, that the really good stuff is always in the free mission, and the stuff you have to pay for is all cosmetic. If you don’t want to pony up the cash, you are still on an even playing ground with everyone else.

Even though Firewall is clearly engaging players to spend more money on it, nothing about the game and its current monetization strategy feels pay-to-win. Even those with the base game have access to enough stuff out of the gate that they are perfectly viable, and progressing through the leveling system will unlock enough goodies to keep most players content. 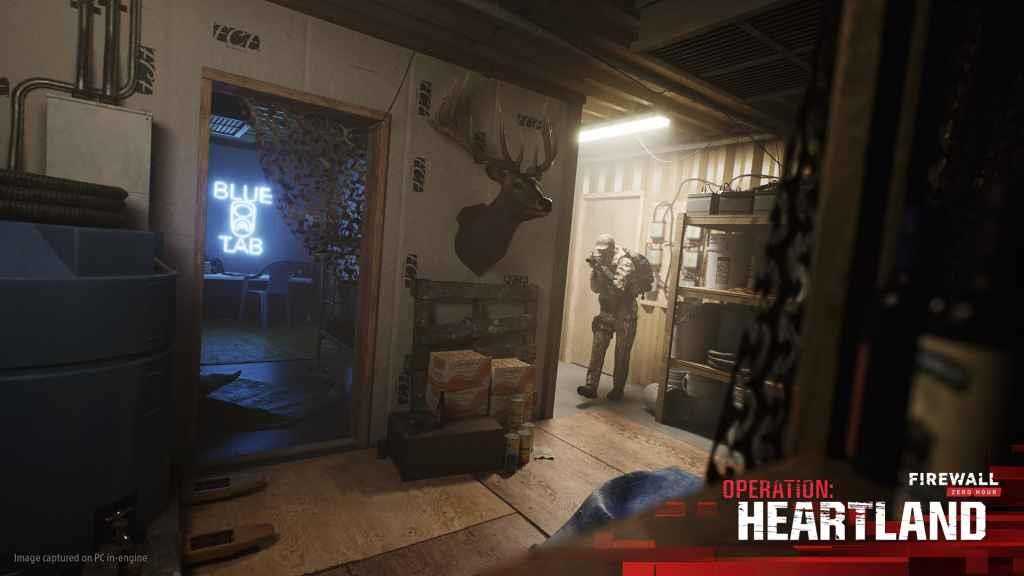 I was obviously very impressed with Firewall: Zero Hour when it released, and I’m even more impressed now. There aren’t many PSVR games that see this caliber of updates, and the community is clearly onboard and engaged. The game has only gotten bigger and more impressive since it’s launch – without losing any of the features that made Firewall so damn fun to start with.

If you are thinking of jumping into Firewall for the first time, don’t be intimidated. You will find a community that is warm and welcoming – and chock full of folks that are just starting out, just like you. And if you’ve been away from Firewall for a while, now feels like a great time to jump back in. I think that you will like what you find. Firewall is a great game that just keeps getting better, and it shows no signs of slowing down.