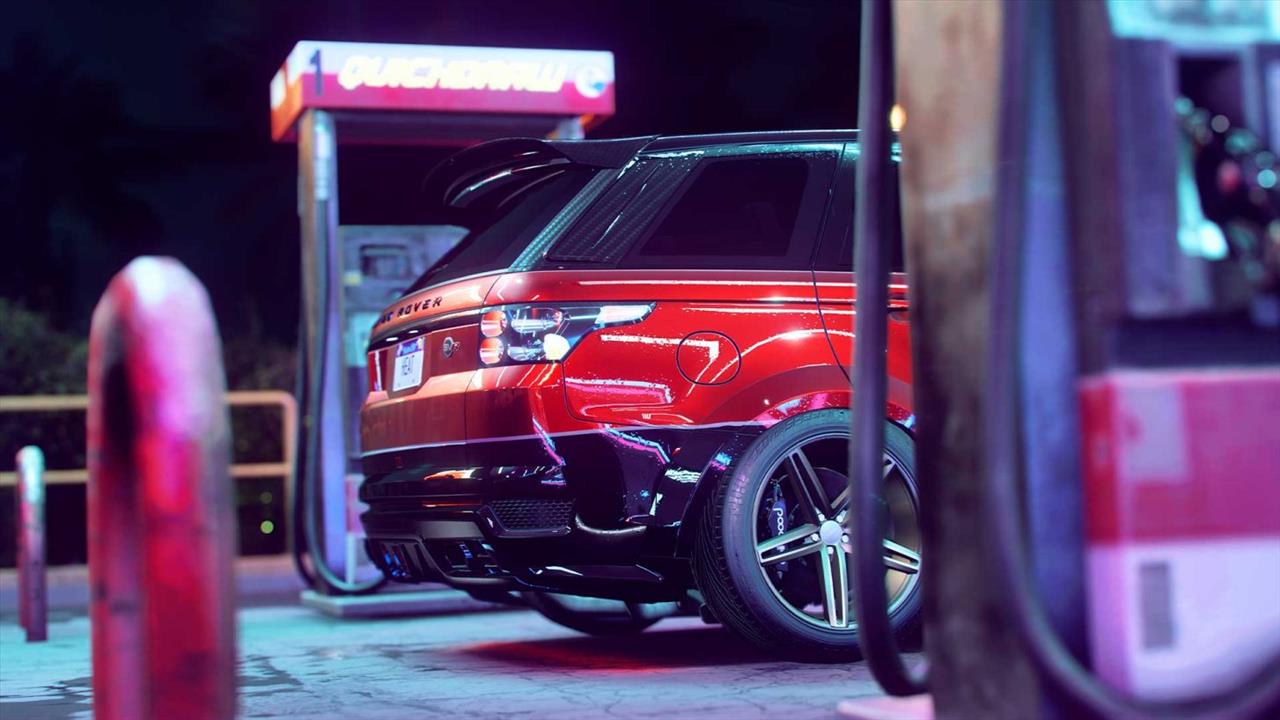 Ahhh, Palm City. This Miami lookalike was designed to appeal to all racers. From speed junkies, to off-road ruffians, and even burnout drifters. Her paved roads, backstreets, alleys, and dirt trails are just begging to be torn up by hot rotating rubber. She’s a hotbed of high-speed competition. But Palm City isn’t the Wild Wild West.

Even though her streets are devoid of pedestrians (presumably hiding in fear), Palm City’s finest are here to protect and serve the imaginary people. Because this is still a civilized society. And where there’s infrastructure, there are rules. Unless, it’s nighttime, but we’ll get to that later.

Welcome to Need For Speed Heat. If you’ve got a car and you’re looking to go fast—you’ll fit right in.

Through a combination of news bulletins and cutscenes, Heat educates us on the racing epidemic that’s plaguing Palm City’s majestic streets. We’re introduced to a cast of law enforcement characters who are tasked with killing your buzz and taking you down. And they are quite villainous about it. 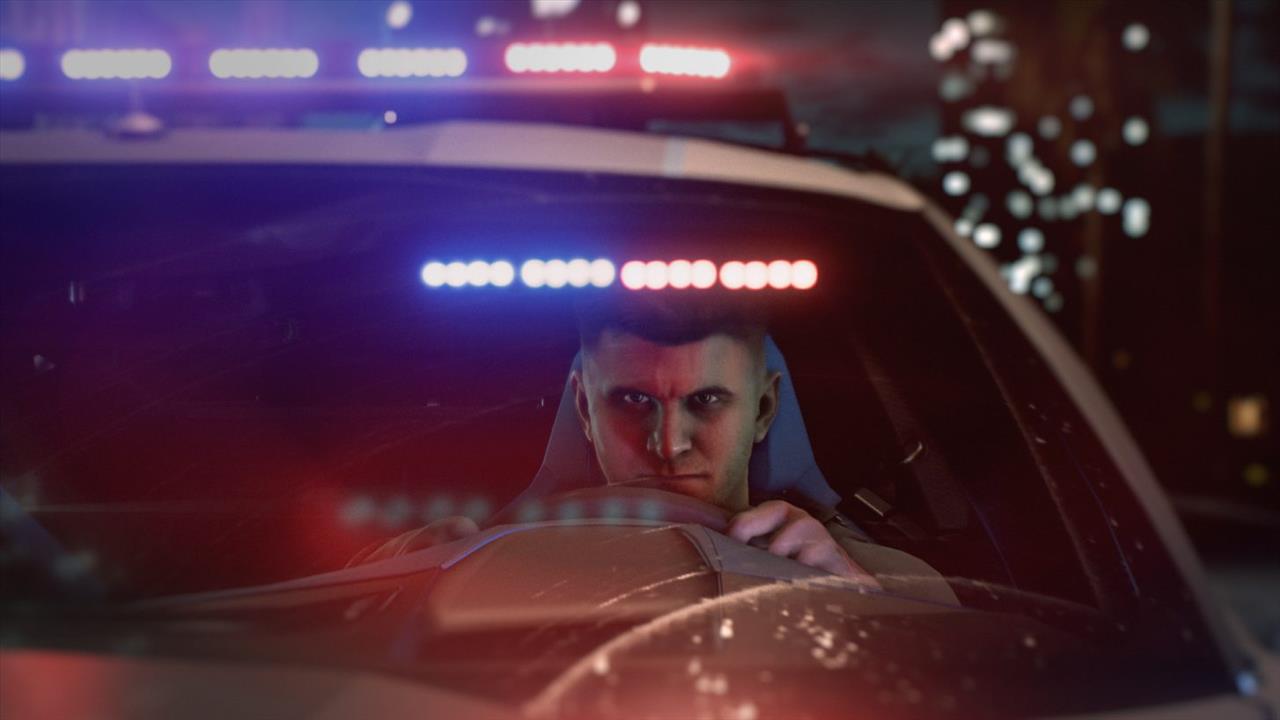 Once we’re up to speed (ha), we get to choose from a wide array of diverse-looking characters. Our player is new in town and looking for some wheels. We meet Lucas, the local mechanic who’s well past his racing glory days. He so graciously presents us with a lineup of four vintage cars: a ‘65 Ford Mustang, an ‘88 BMW M3, a ‘96 Nissan 180SX Type X, and a built-out ‘67 Chevy Camaro SS. One of these beauties will serve as our first vehicle.

Aside from the Camaro, which already has some upgrades installed, these starter cars are the same level—a metric Heat is used to quantify a car’s performance capabilities. Better parts equate to a higher score and a better driving experience. Now that we’ve picked a car (I went with the Mustang), it’s time to start racing. 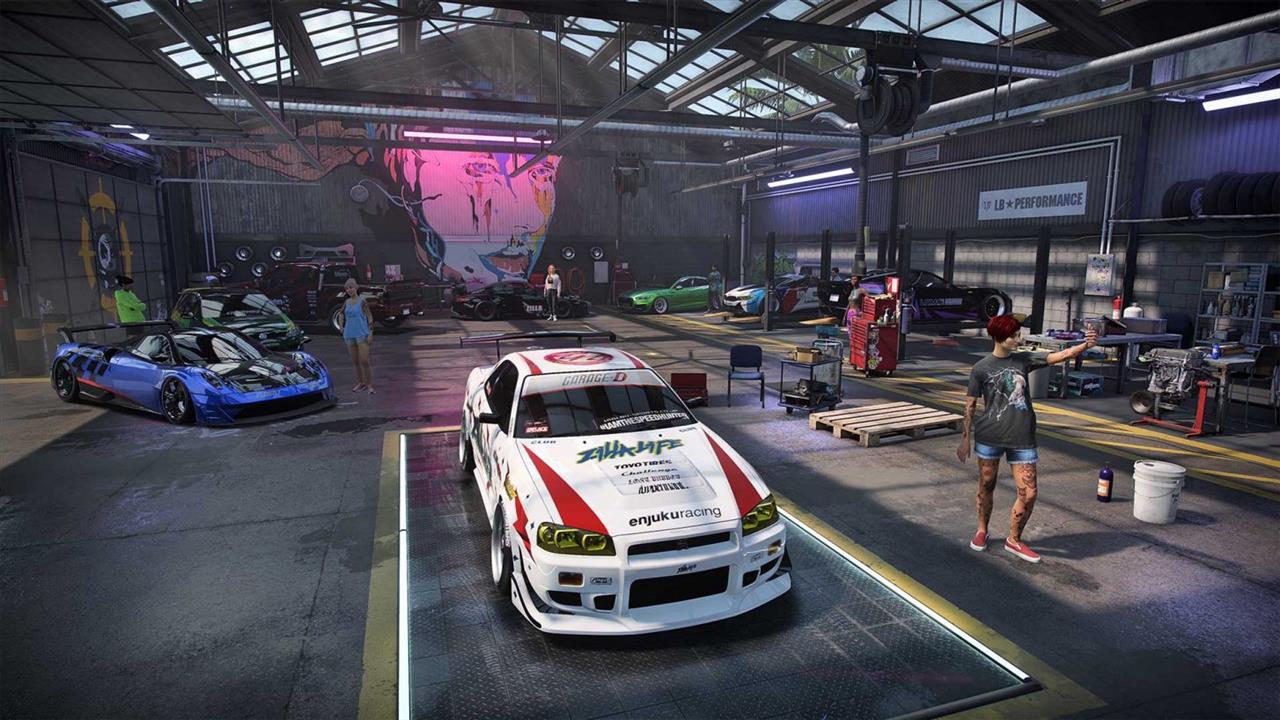 Our new garage pal, Lucas, rolls with us to our first race, a circuit that takes place in the heart of what we presume to be Palm City’s business district—based on the grid design and towering buildings. Here, we get to put our new wheels and novice skills on display.

Heat’s controls are straightforward and in line with most racing games. The one element that may take some time to get a “touch” for is drifting around corners. Heat’s control system for this is different than its predecessors. Despite the simple controls, you can’t expect a “pedal to the metal” approach to ensure a first-place finish. So, take it easy, you speed demon. 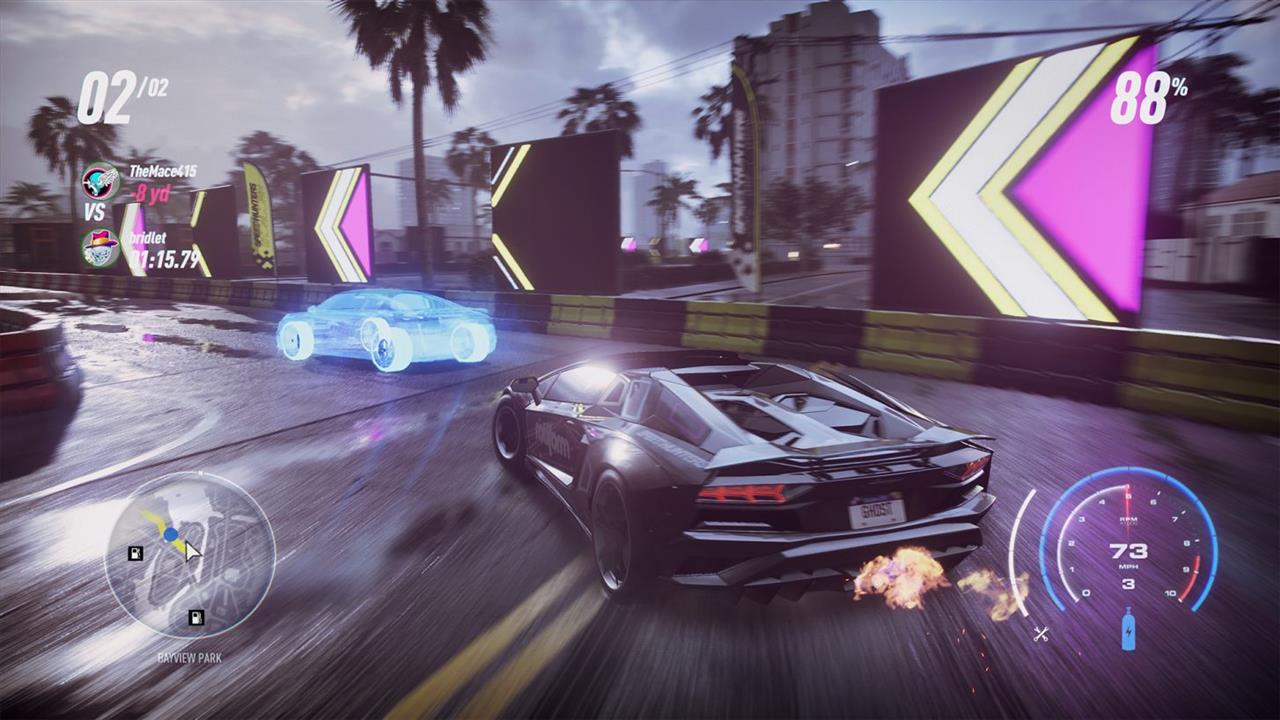 After we complete our first race, we head to the local parts store to buy a nitrous kit. Here, we meet Ana, a fiery Latina who’s a bit overzealous when it comes to racing. Nonetheless, we’re stuck with her, as her campaign advances most of the storyline.

If we’re serious about racing, she tells us, we need to be racing at night. So, we do. Heat’s gameplay is split between day and night racing. When the sun’s out, the city is tame and orderly. Sanctioned competitions are spread across the map. These legal races have a) closed tracks (i.e. no traffic), b) no cops, and c) cash prizes (“Bank”). 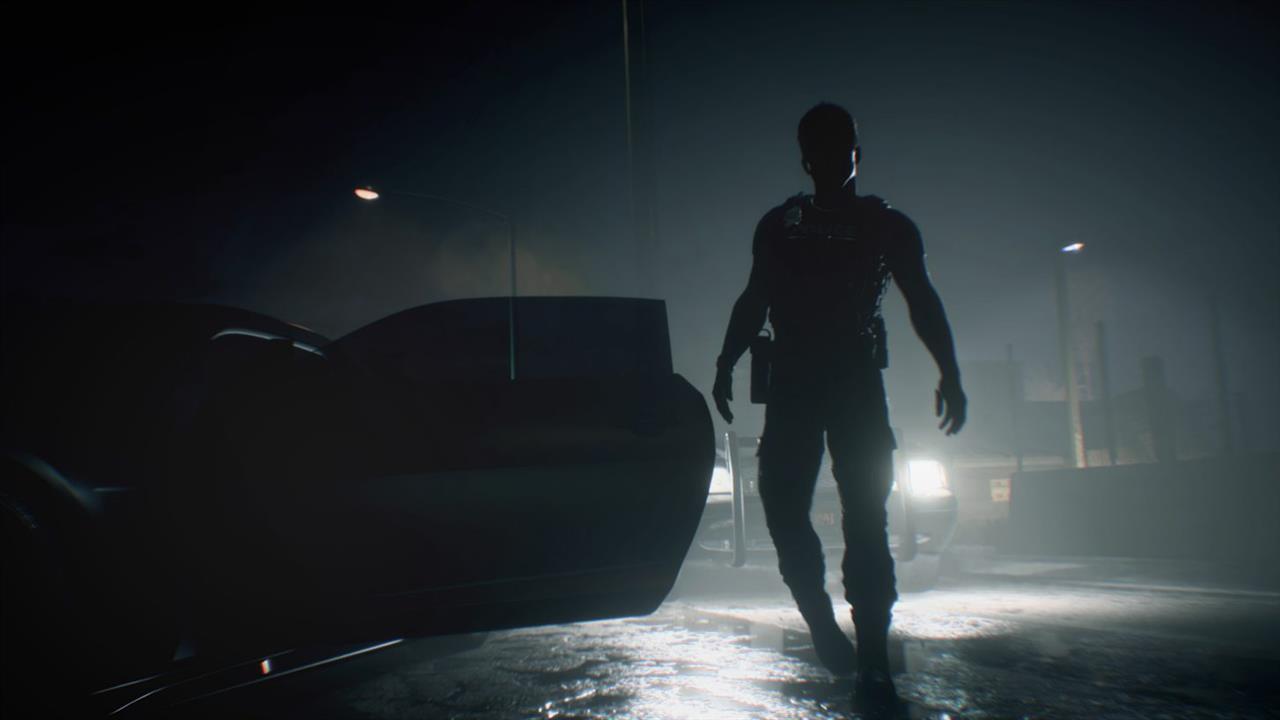 Although they patrol the city during the day, the police’s presence is sparse, and they abide by the laws they enforce. But, when the sun sets, law and order disappear with it. Heat’s night mode is full of illicit races. Instead of cash, the prize is reputation (“Rep”). As great as earning Bank is, Rep is what drives your progression and unlockables. There’s a catch though, of course. You can’t get caught, or else you lose Bank and your night is over.

Racing at night comes with an added risk. The men and women in blue go full werewolf, embracing amplified aggression and takedown tactics. Seriously. During the day, you can rip past a cop at triple-digit speeds and they won’t bat an eye. At night, the rulebook is tossed out of the passenger window. These eager beavers throw caution to the wind and will ram the ever-living daylights out of you. Let the cops corner you—or wreck your car—and you’re busted. They will go to great lengths to stop you, even to the extent of jeopardizing their own lives. The Palm City Police Department doesn’t play games. 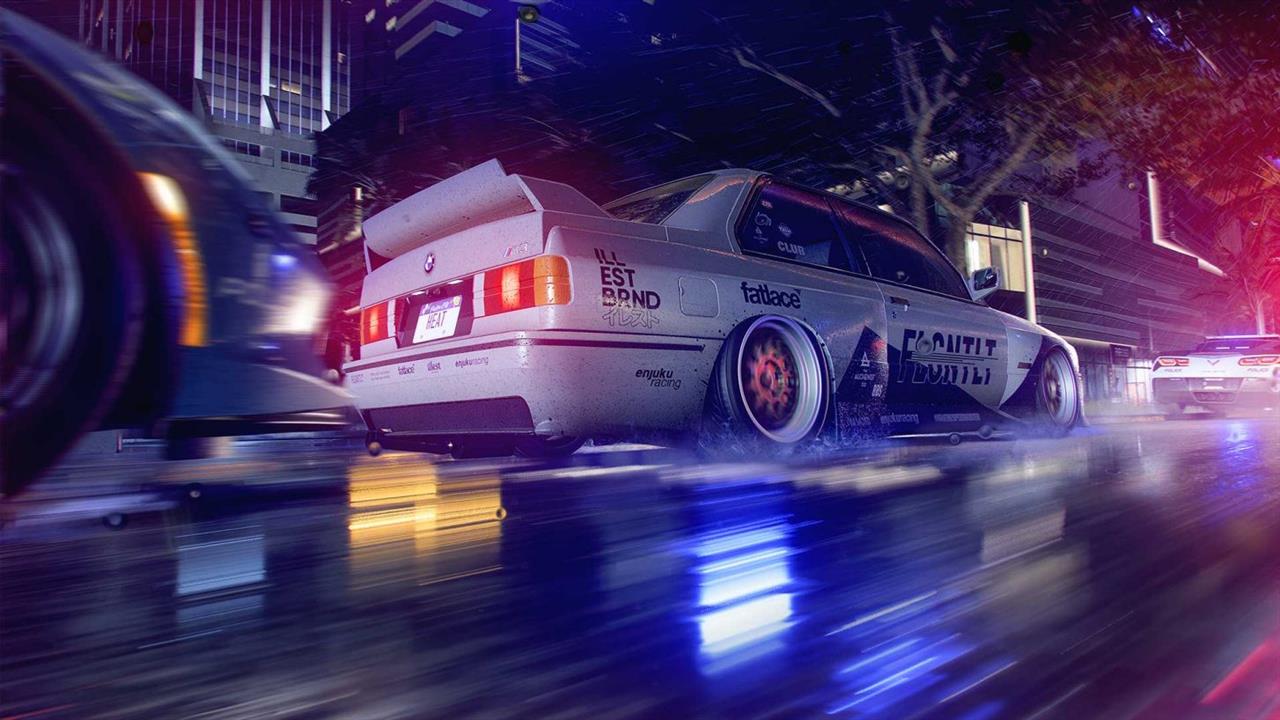 The intensity they pursue you with is measured by a “Heat” scale of 1 to 5. As the level rises, faster and stronger squad cars join in. This element of Heat takes some getting used to. In lower-level cars, it’s very difficult to escape anything above level 1. The key to alluding the Palm City PD is finding jumps, especially over water, and outfitting your car with a radar disruptor and repair kit, once you can. Also, drift cars are terrible for outrunning cops.

But high risk, high reward. The Heat scale acts as a Rep multiplier. For example, if you’ve accrued 10,000 Rep in a night and your Heat level is 2, you’ll earn 20,000 Rep if you can safely get back to a garage. In sum, day racing earns you the big bucks, while night racing gets you Rep—which you need to unlock new cars, parts, missions, and races. 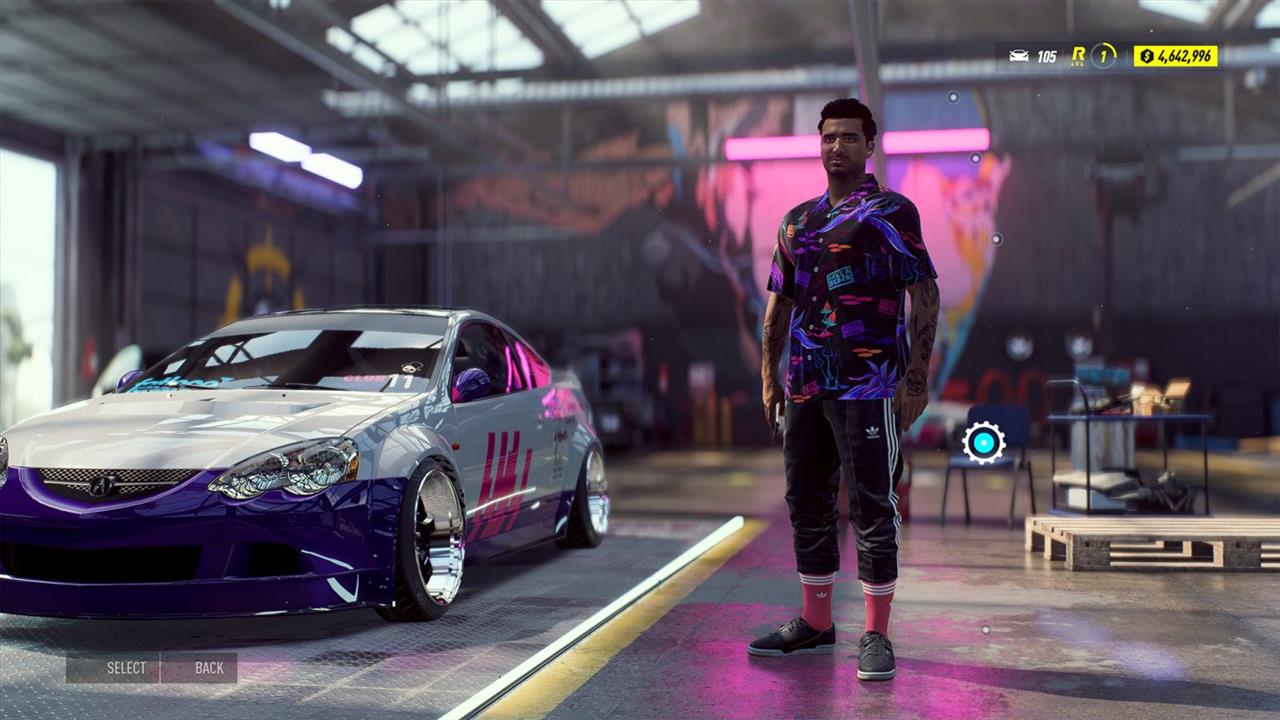 Speaking of cars, Heat boasts an extensive list of automobiles: 127 in total. And it features a little of everything, from rare classics like the ‘88 Ferrari F40 to modern marvels like the ‘17 Ford GT. You can even rock a ‘63 Volkswagen Beetle if that tickles your fancy. As you buy and collect vehicles, you’ll be able to tinker and tailor them to your liking in the garage.

The garage doubles as your HQ and customization workshop. Here, you can tune your cars to fit your driving preferences or to maximize performance for a particular type of race, like throwing on rally tires for off-road circuits. Heat illustrates your car’s tendency with a graphical display that’s divided into four quadrants: road, off-road, race, and drift. 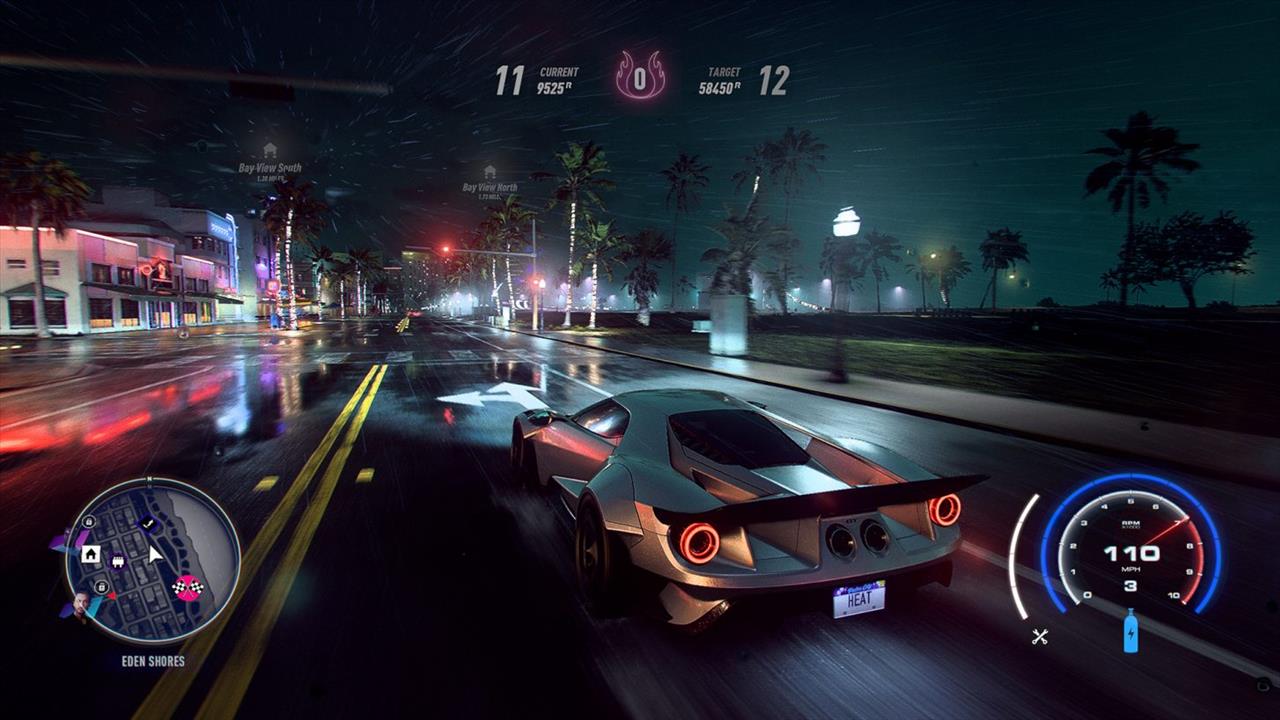 To be successful, you’ll need to outfit your car based on the driving style required in each race (e.g. have a car in the drift quadrant for drift races). Although Heat’s controls are pretty simple, you can’t expect a car tuned for racing to perform well enough to win drift competitions. And vice versa.

There are a few elements of the game that were a bit off or could use some work though: 1) the game’s characters, 2) post-campaign playability, 3) the concept of “The League”,  and 4) Crews.

The characters are pretty cheesy. Maybe it’s their random outbursts during races, which make logical sense 50% of the time, or that they seem to really lean into their personality traits. The game just felt a bit dramatic. 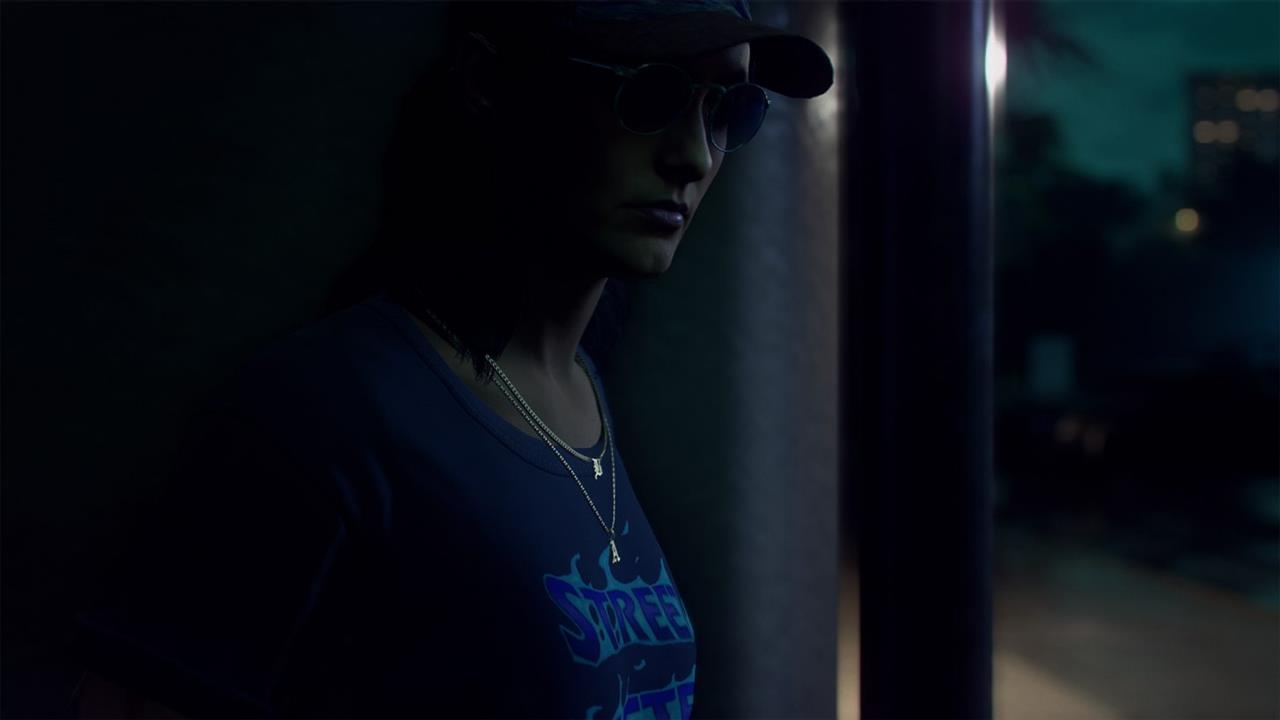 Heat’s campaign mode is siloed into four parts, each with a distinct driving focus and style. But, once you’ve completed these series of missions, there’s kind of this “Well, what do I do now?” feeling. You can try and accumulate enough Bank to buy the game’s most expensive cars and best parts. Plus, there’s an abundance of side challenges like speed traps, jumps, and drift trials. But I really wish there was some sort of ladder or leaderboard, something to keep players enticed after the campaign or even alongside it.

The League, which is essentially the street racing elite, is another area I didn’t quite connect with or maybe understand. For the entirety of Ana’s campaign, the League is put on a divine pedestal. But it’s an all-shine no-substance kind of situation. Once you’re in...nothing really changes. You unlock some more races, or so the game suggests. But that’s it. Here’s a spot where I’d like to see that aforementioned ladder or leaderboard make an appearance. Challenge others in the League, race to improve your ranking. That sort of thing. 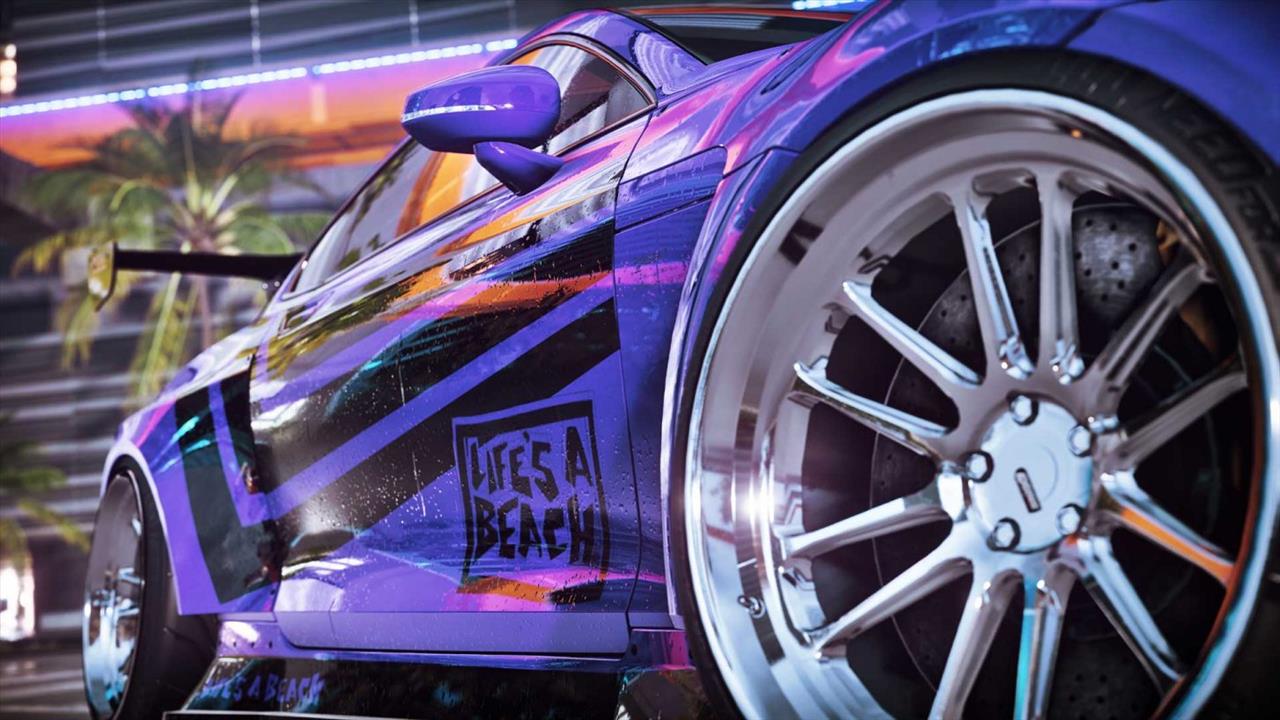 Crews, which serve as the gateway to Heat’s online multiplayer, are another area that left something to be desired. You’re automatically placed in a crew, which operates in the background and doesn’t have to be a feature you interact with if you don’t want to. I appreciate the option to sort of forego this functionality (by just ignoring it), while still receiving the benefits from being in one. But it feels empty. Crews are spoken of in high regard - like brotherhoods or pacts. That connectivity isn’t really there.

Its characters lack depth, and it could really use some sort of leaderboard or ladder to compete with. But, overall, Need for Speed Heat is worth playing even if you're just a casual racing fan. The day/night dynamic is entertaining and mixes things up. The car list is better than expected. Customization is clean and maximizes personalization. And the driving mechanics aren't overly complicated but present enough of a challenge.

In short, Need for Speed Heat gets most of the important stuff right.