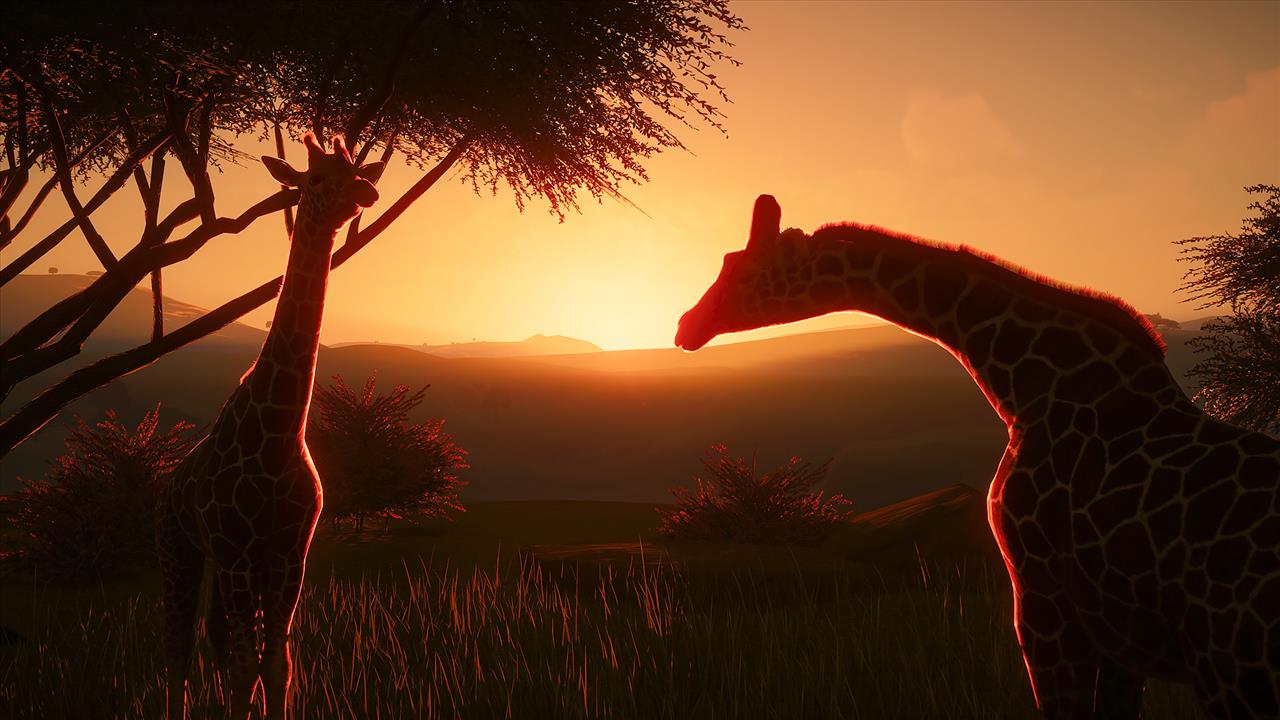 The zoo simulator is an endangered species. The last (real) one was the Zoo Tycoon reboot in 2013—and, like Planet Zoo here, that one was made by Frontier Developments. Planet Zoo is really the only show in town, like it or not. And at first, I did not.

It wasn’t because of the animals. From aardvarks to zebras, the Zoopedia’s cast of creatures is detailed and lively. The lion fur is fuzzy, the frog skin is slick, and the elephant hide is leathery. The animation is convincing, too. The alligators just break the surface of the water like scaly icebergs. The timber wolves run and play like the good boys they are. Even the iguanas, uh, basically find a warm rock and just sit there. See? Totally convincing.

But there’s an entire second part of this game I was not expecting: the part where you become an architect. Now, that may sound overly obvious to some. Want to run Planet Zoo? Then you better bring your engineering degree! No, I was expecting to simply kick over the ticket counter, slap down a prefab animal shelter, and watch the money bags pile up in my bank balance. Easy peasy. 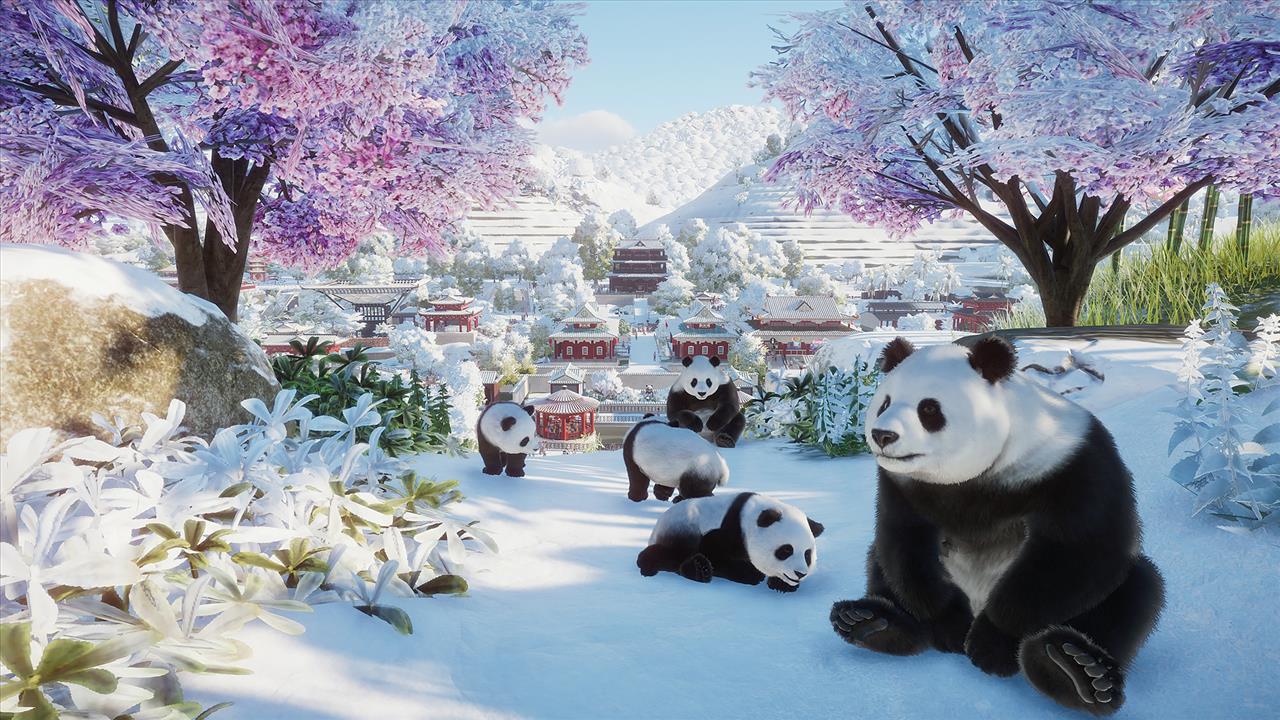 Planet Zoo is not easy peasy. Well, yes, if you want to be lazy like me and just drop a few prefab buildings down onto a flat lot: be my guest. But you won’t be getting the most out of Planet Zoo, and you’ll know it. One glimpse into the Steam Workshop where other players have uploaded their mind-boggling, beautiful architecture will force you to reckon with yourself. Are you going to be the kind of zookeeper that does the bare minimum to keep the animals' happiness meters in check, or are you going to be one mean architecture degree-wielding machine?

I wasn't happy with Planet Zoo until I figured out I had to engage with this enormous second part of the game. Wasn't happy until I stopped treating the game like an economics spreadsheet and started treating it like an art project...alongside an economics spreadsheet. And I realized I’d never find happiness until I came to terms with manipulating individual LEGO pieces and parts on their X, Y, and Z axis. The architectural side of the game requires just as much finesse as the animal care side. 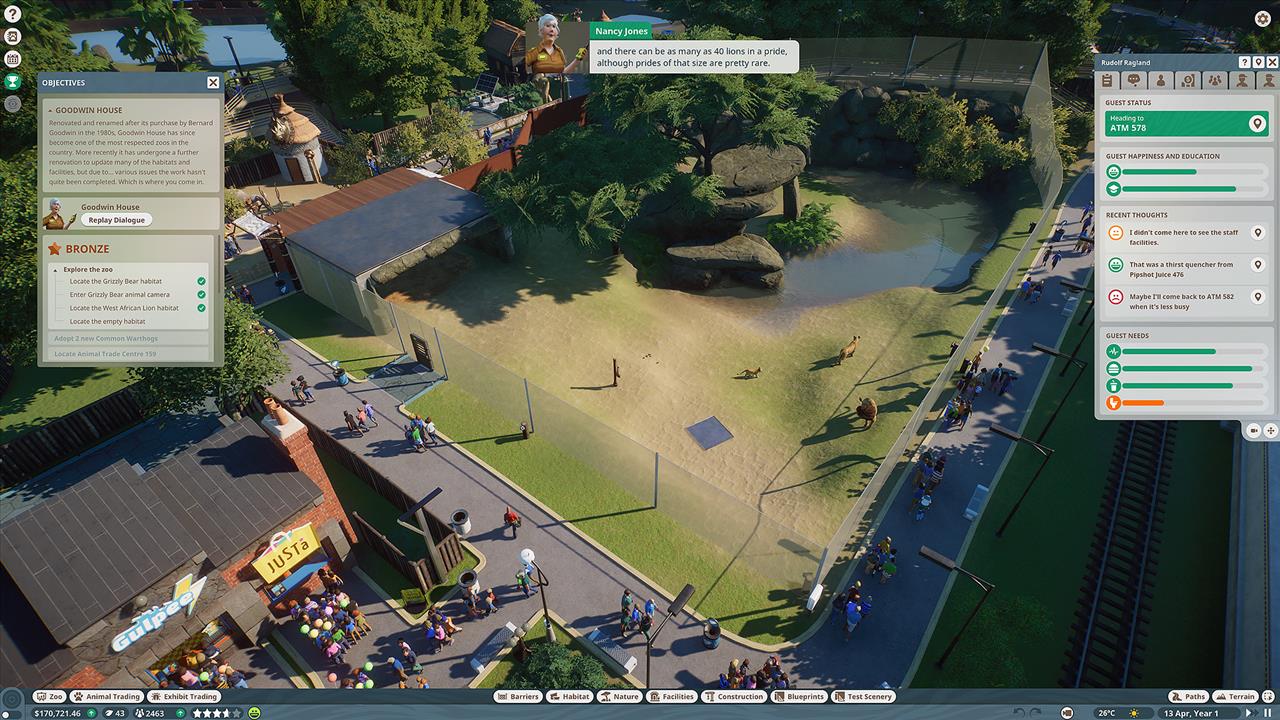 The game made me pay for all of that learning. Took it out of me in blood. At first, there was no end to the troubles I’d seen. I had a hard time swapping out two-way glass with one-way glass. Adjusting terrain was a percentile nightmare, spray painting grass over soil, and rock over sand. It’s like I was a Mother Nature-loving graffiti artist. Drawing footpaths around my zoo was a game of inches, one that I was losing.

I was given tutorials on how to assign zookeepers to specific work zones. What I really needed was someone to explain to me why my water was “obstructed” when trying to build a high water-content exhibit for my saltwater crocodile. What I needed was some clue as to how to make elevated paths so visitors could look down into a habitat rather than having those habitats' barriers get kicked out by escaping animals. Alarms are going off and people are running for the exit. That's the sound of failure in Planet Zoo. I heard it many a time. 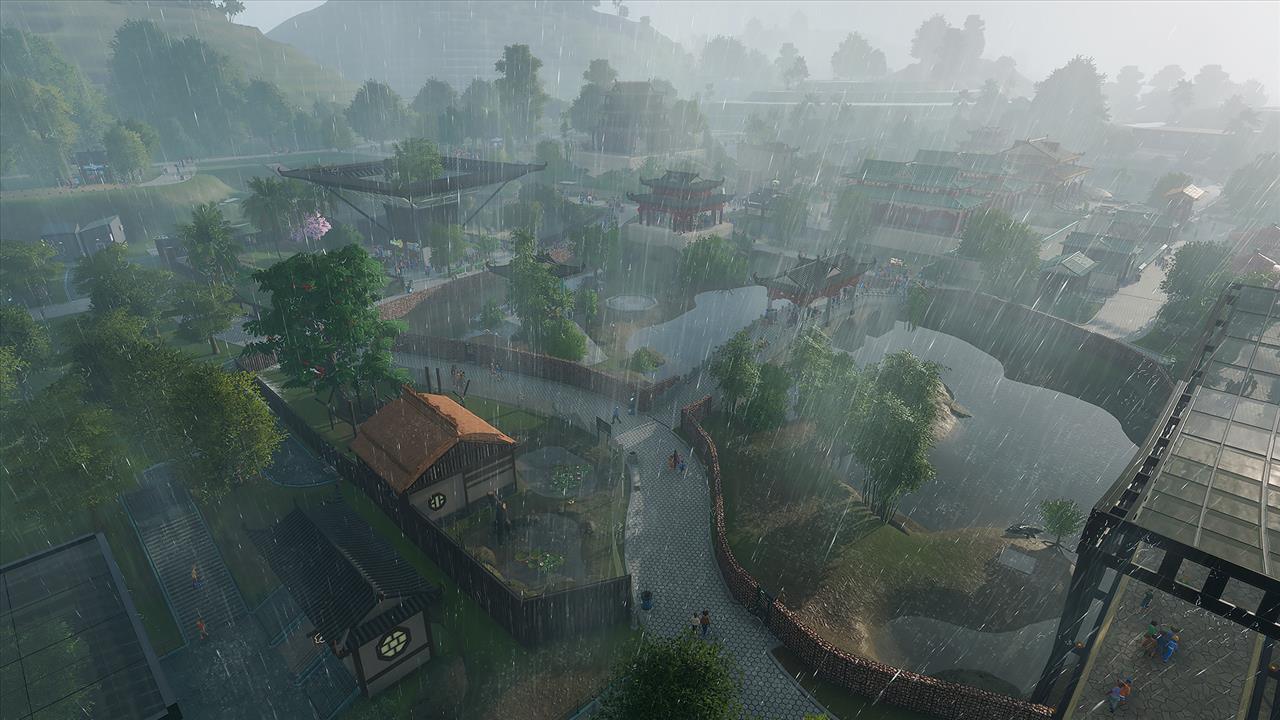 I plodded (plodded!) through the career-based tutorial, whisking me to faraway lands across the globe, to bear witness to the developers’ sheer artistry, then coupling it with my stunning lack of dexterity in completing menial tasks, like, deleting the mossy rocks the Saltwater Crocodiles didn’t like seeing in their habitat. Or me, trying to find the button to call the mechanic to fix the degraded fence that let the antelope escape. Pardon me: not antelope, but Thomson’s Gazelle. Or was it the Gemsbok? Oryx gazella—class Mammalia, order Artiodocryla, family Hippotraginae, genus Oryx. I’m not even certain all of that Latin is spelled correctly. The font they chose for the game is near inscrutable as they introduced smaller and smaller italics into the write ups.

Franchise Mode is brutal in the early days. But it’s the kind of game start I’m looking for. A big dream and a small wad of cash. Too small, maybe. In my early days, by the time I’d gotten a few decorative rocks and trees on display, not to mention the heavy-handed number of employee facilities I thought I needed to even start a zoo, I was broke. Zero balance. And I hadn’t even made an animal exhibit yet, let alone gotten an animal into it. Absolutely brutal. I learned that, just like in SimCity, you have to start small. Build a small animal exhibit. Build the small Gulpee drink hut and the small Chief Beef grill. Don’t go in there ordering a large of everything. Don’t even order everything. Learn the bare minimum you need to get started and then slowly spread your wings. 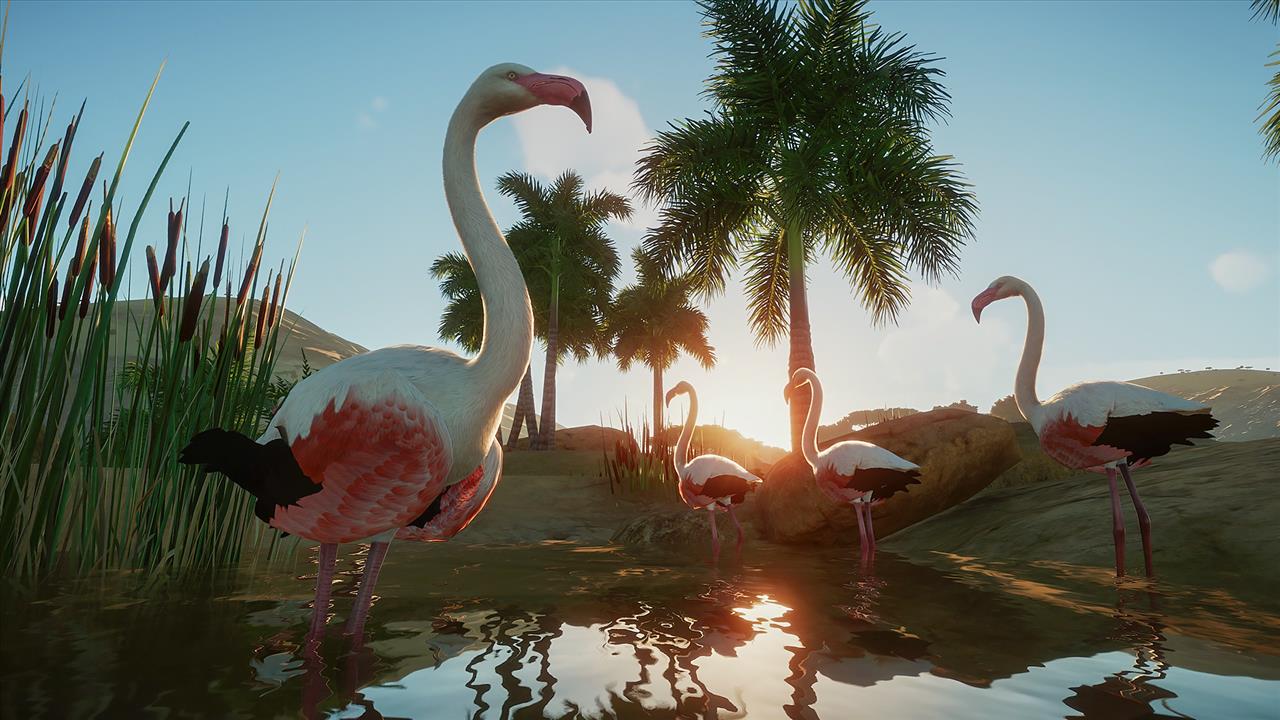 The tutorial shoves into your face all the beautiful habitats you won’t have the skill or ability to build. The franchise mode will make you take out a loan just to get your starter zoo on its feet—and it won’t get on its feet. On the other end of the scale, the sandbox mode will paralyze you with choices by unlocking the game’s full array of options. Planet Zoo is more game than the average player is asking for. But if that’s the game you’re asking for, Planet Zoo is the game for you.

The game teaches you the hard and fast rules about keeping your species alive, and even happy. But you have to find it within yourself to love the architectural aspects. It's a lot. If you don’t want to make a pretty-looking exhibit, then, intentionally or not, you’re cutting yourself off from half the game. This one’s for The Sims players that typed “rosebud” a hundred times, just so they could build their ideal home for hours and hours—and then maybe let their sims walk around in it for a couple minutes. 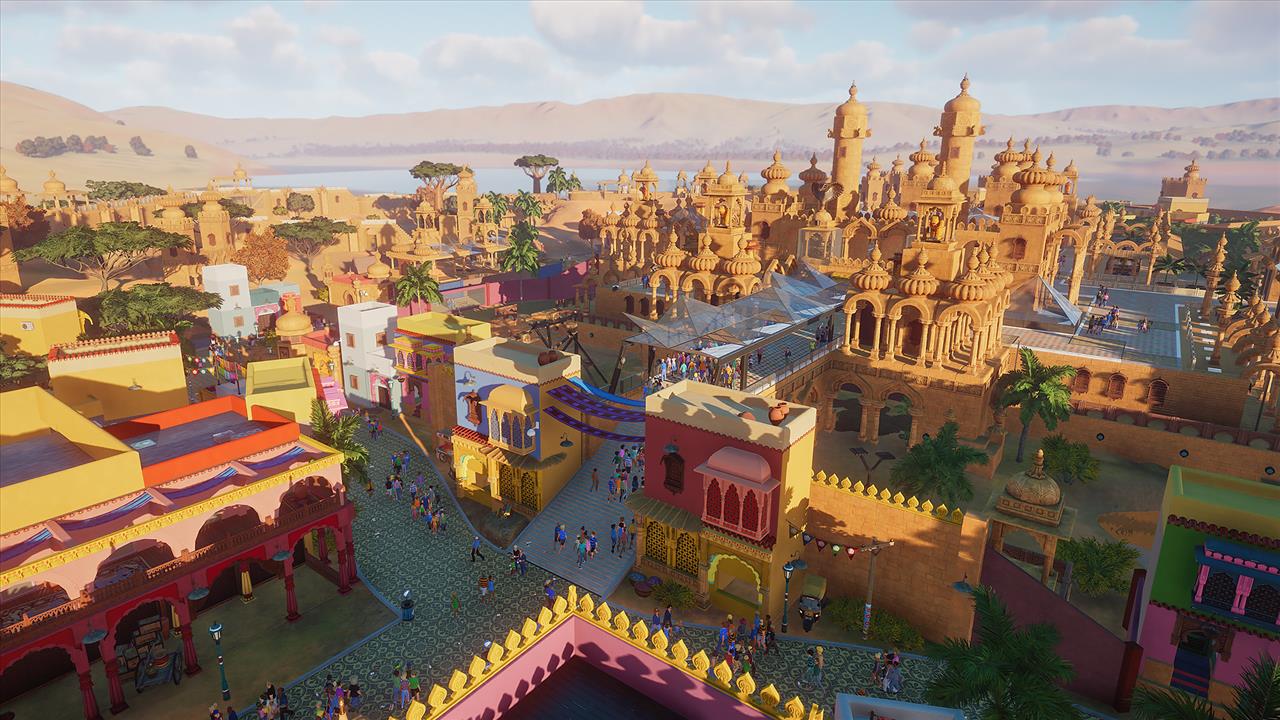 Thank goodness for filters in sandbox mode. Because self-imposed limitations are the only thing keeping my sanity in check in that sandbox. There’s entirely too much. Left unchecked, there’s too much length, width, and height to your options. Yes, you can plop down the tin can of an info booth for your zoo visitors. But you won’t be satisfied with your laziness once you see someone that recreated Frank Lloyd Wright’s Fallingwater home with the info booth dropped inside of that.

There are things I still don’t understand. Like, why did Aisha the Sable Antelope kick through that section of chain link barrier when there were so many other holes already in the fence? Aisha's just being a jerk. Or why did inspectors only show up when I finally figured out that I was overfeeding my Western Lowland Gorillas and their leftovers were stinking up the place? Cool it, protesters, you’re scaring away the paying customers! 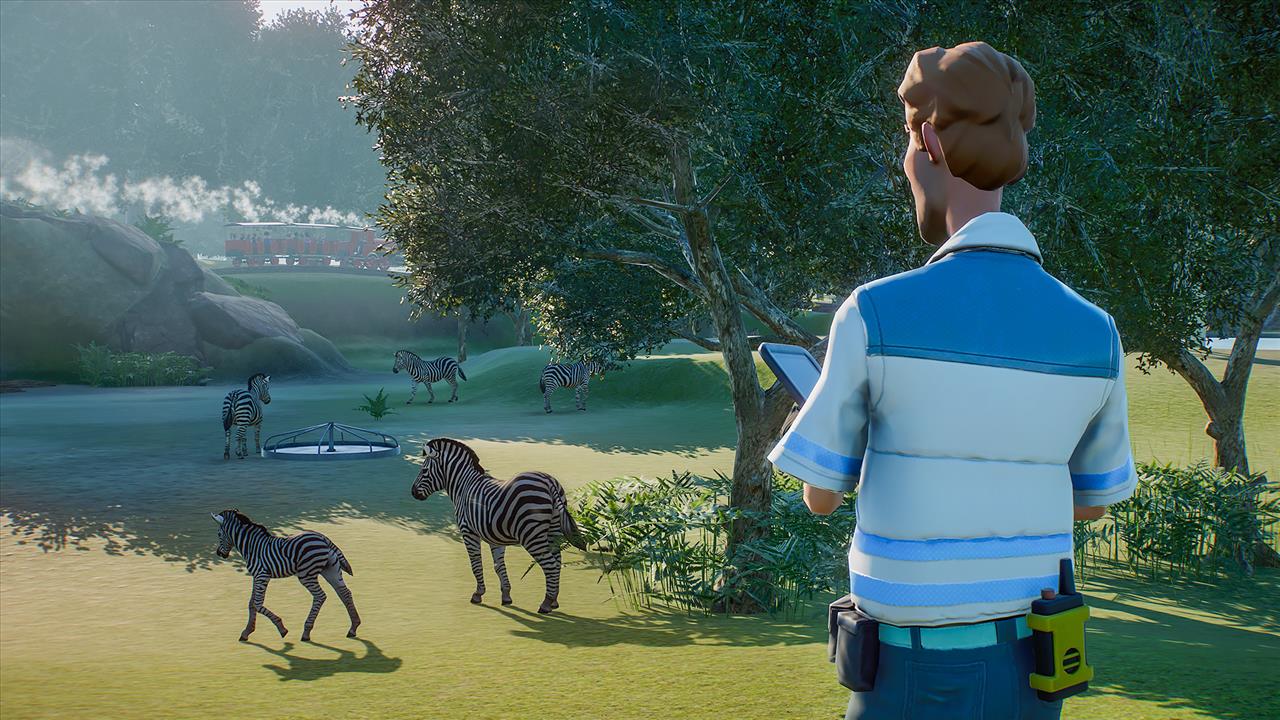 I wouldn’t mind if the Zoopedia was organized for us plebes. Because everything is (naturally) listed in alphabetical order. But that’s hardly helpful when you can’t find the Giraffe entry because it’s a Reticulated Giraffe. There is a Hippopotamus entry, but the Pygmy Hippo isn’t listed next to it, no. Also, peacocks? They’re called peafowl. But don’t look under P because they’re Indian Peafowl; you already passed them. There’s an Indian Elephant and an African Elephant, and there’s an Indian Rhino but no African Rhino. Bison are American Bison, Camels are Bactrian Camels. About the only thing you can reliably find is the Aardvark, who takes its rightful place at the beginning of the alphabet. Zebras don’t bookend the Zoopedia, though. They’re Plains Zebras. The...Yellow Anaconda sums up the list. But they’re cool. They can stay.

The Dark Souls of zoo tycoon sims. Start slower than you'd like to, YouTube yet another tutorial, then watch Planet Zoo blossom before your eyes. This is a slow, mindful, niche of a sim that demands more patience and learning than you'd expect.