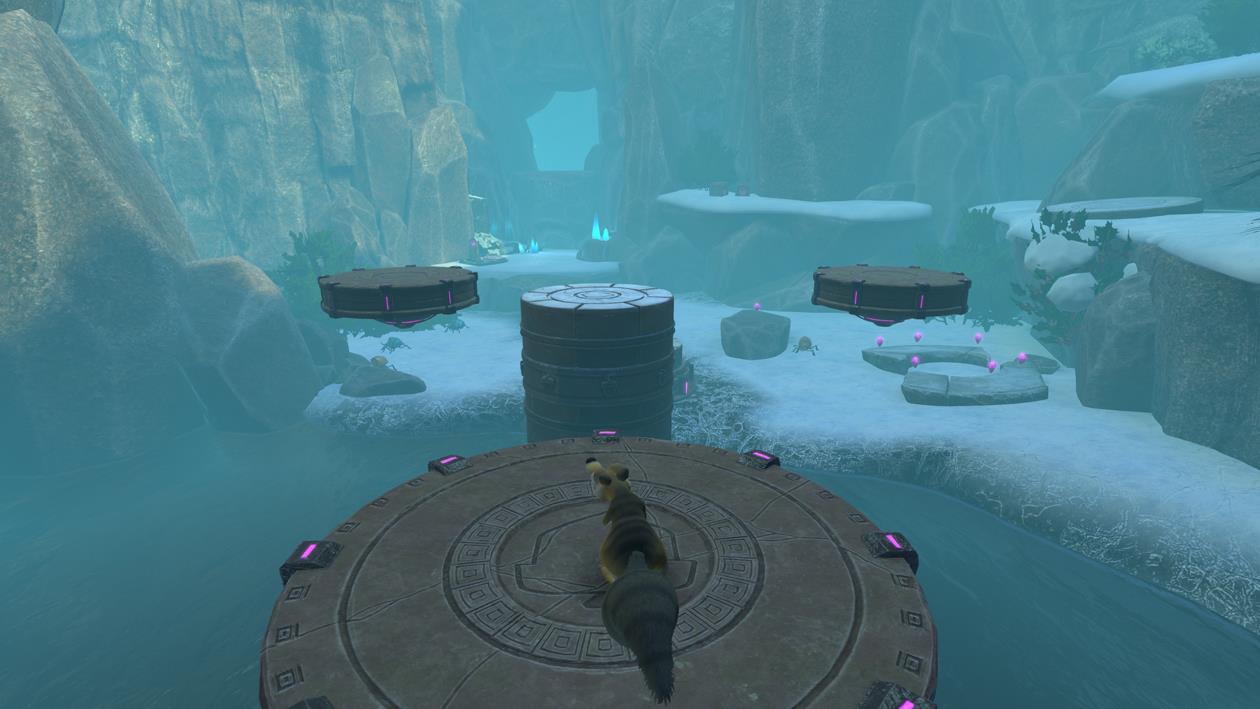 It’s been a while since I played a licensed game based on a film franchise. I think the last one was X-Men Origins: Wolverine – Uncaged Edition, the best Wolverine game ever released, that saw players decapitating and dismembering enemies as Wolverine in a way that was never done before.

Ice Age: Scrat’s Nutty Adventure is not that game, but it is nearly as fun; albeit without the gore. Coming out of nowhere from developer Just Add Water and published by Blue Sky Studios, it’s the spinoff adventure focusing on Scrat, the Arctic Squirrel from Ice Age that audience’s never got enough of.

The game doesn’t have anything to do with the original films, outside of Scrat’s involvement. There are some familiar characters, but they are more so B- or C-List supporting cast that pop up as boss fights. I can’t even remember.

In this latest iteration of the Ice Age franchise, Scrat is after the Crystal Nuts—literally acorns made of purple crystal. It’s a simple plot that has no greater meaning, but such is Scrat’s life.

To do this, players branch out into four zones of different biomes from a central hub area, going in a linear order. The game is a third person action platformer, seeing Scrat traverse levels by running, dashing, and hitting his way through beetles, mongooses, flies, and boss fights.

In playing this game, I want it to be like this old PS2 game I used to play at my cousin’s house: it was a Looney Tunes game that had terrible direction. I didn’t know what to do or where to go, but I remember it being fun nonetheless.

This game is a lot easier to understand. For one, modern graphics make things a lot easier to see, and with the clarity of game design and the simplest of plots, it turns out to be much better than those old-school licensed games, if only to a point. 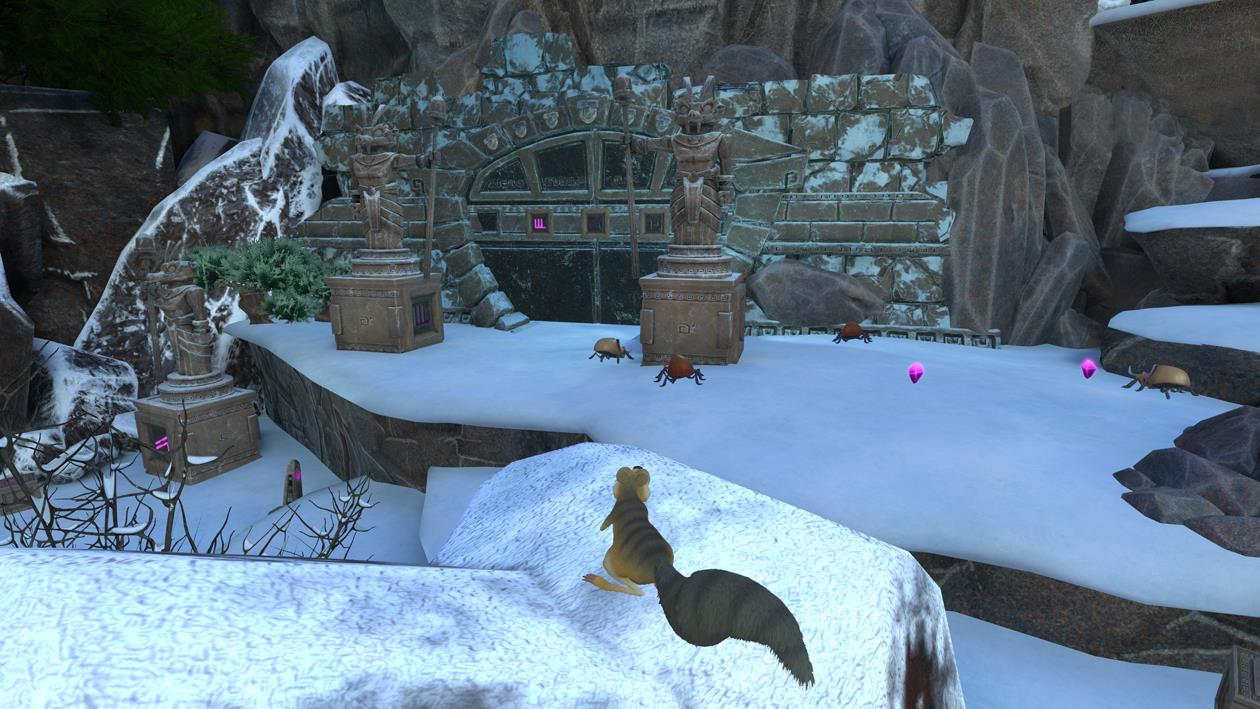 Players start on a short leash, only being able to jump once, but still being able to dash, hit, and throw rocks. The first area is simple platforming: going from point A to point B, timing jumps so that Scrat won’t fall into oblivion when jumping across chasms onto moving platforms. There are little areas that players reach that contain collectable statues and tablet pieces that show up in the central hub area, but don’t offer anything outside of immediate gratification for players with a little bit of intuition.

In addition to those tablets and statuettes, Scrat can collect little purple crystals (not clear if they’re amethysts) and also heart boxes that increase his health. Although the regular enemies don’t have too much trouble, they can get Scrat into hot water if the player isn’t careful. The rate at which Scrat’s health increases is subtle, but over time the health bar extended a good chunk across my screen. This benefit certainly helps out, but it’s the way in which the game design helps perpetuate player ability that I admire the most.

As I said before, players start out with limited ability. The first area is standard, lightly touching on an Ice Age setting, easing the player into the game’s platforming and action. But by the end of it, players gain the ability to double jump. It’s something that genuinely surprised me. By just doing this one thing, the game world opens up so much to the player. Where before, the player can’t access certain areas, after completing just this one level, they’re able to do a whole lot more. This feature is compounded the further the player advances in the game. Players pass by blocks or platforms that are highlighted in certain ways, and there’s no way to discern what they could be made for. This happened to me more than a few times. I found those blocks and platforms and went over to them to see if a button prompt would pop up. When nothing did, I wandered around, seeing if there was anything I could do. When it was clear there wasn’t, I simply continued on. The button prompt pops up for mounds of dirt, but it took me a little while to realize that I had to repeatedly press triangle to dig up the mounds. I would knock this game for that, for not being clearer, but what works about it is that it helps the player work things out on their own. Although the game may seem a little obtuse, it all works, because the player keeps going. After I completed the game, I wanted to go back to a few of the stages I had gone through and explore what I had missed the last time. 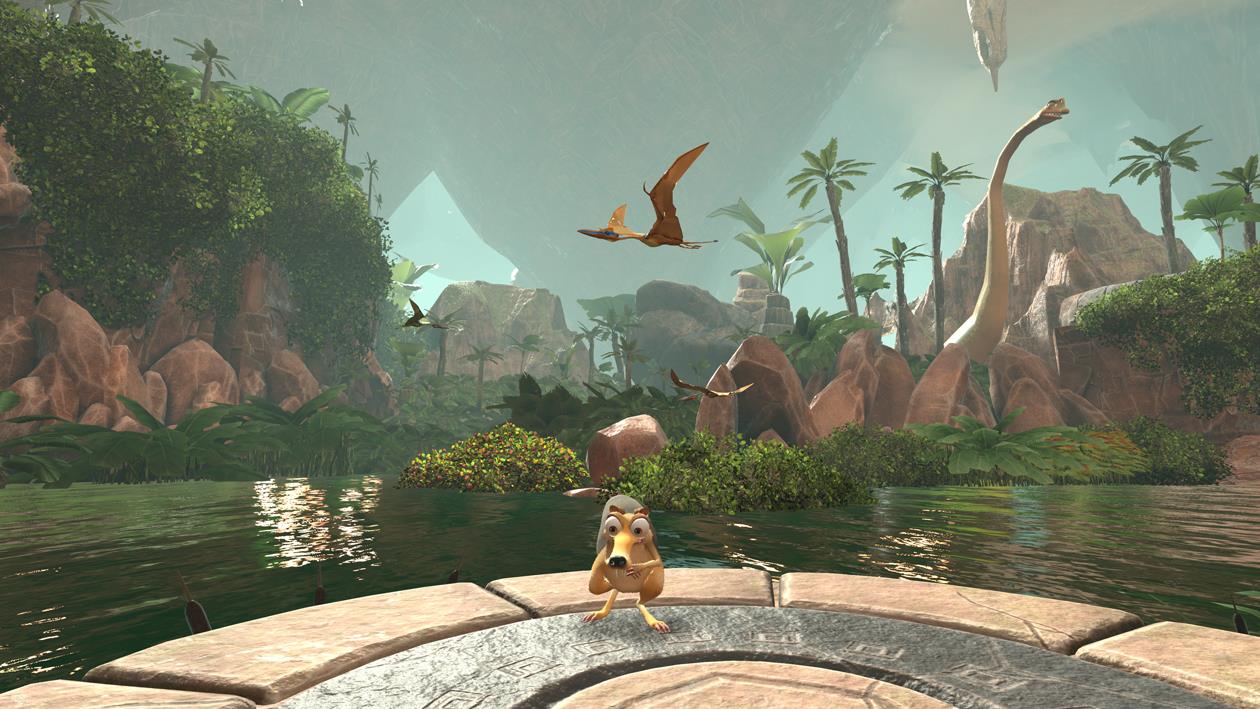 With the blocks, I can press triangle to use telekinesis (Scrat is very powerful and we should not mess with him) to move them and get into impossible to reach places. With the highlighted platforms, Scrat can jump really far and get to more of those unreachable areas. Mostly, these areas lead to the aforementioned purple crystals, heart jars, statuettes and tablet pieces. Besides getting these pieces, the best thing about this is finding those platforms in the first place. It’s a rewarding way to engage the player into exploring more of the game world. I did, and although going through the entire game’s levels again is a bit of a pain, it is intriguing.

Speaking of pains, the game is not without that. If there’s anything this modern title brings back from those old-school licensed games, it is a terrible camera and lagging framerate. Although the camera draws back for most of the game, there are a more than a few places where the camera collides with a wall and runs down it for an uncomfortable closeup, interrupting the game experience. There’s also the framerate. Although I was playing this on a nearly-current gen console (just a regular PS4), the framerate lagged somewhat many times. It didn’t interrupt the gameplay too much, but it was noticeable.

The biggest question I had on mind during this game is: why? It’s been years since a few years since the last Ice Age release on film—three to be exact. The game is published by the studio that produced the last few films (Blue Sky, which is owned by Disney) so maybe they just wanted to make a quick buck. But the thing is, the developers really nailed it here. It’s a perfectly simple game that accomplishes what it sets out to do. It’s not entirely perfect in the technical aspects, but it works nonetheless.

It's refreshing to play a game like this. I don't think I've experienced one since Conker. Although this game is not nearly as complex as that, it works well to send Scrat on his way.