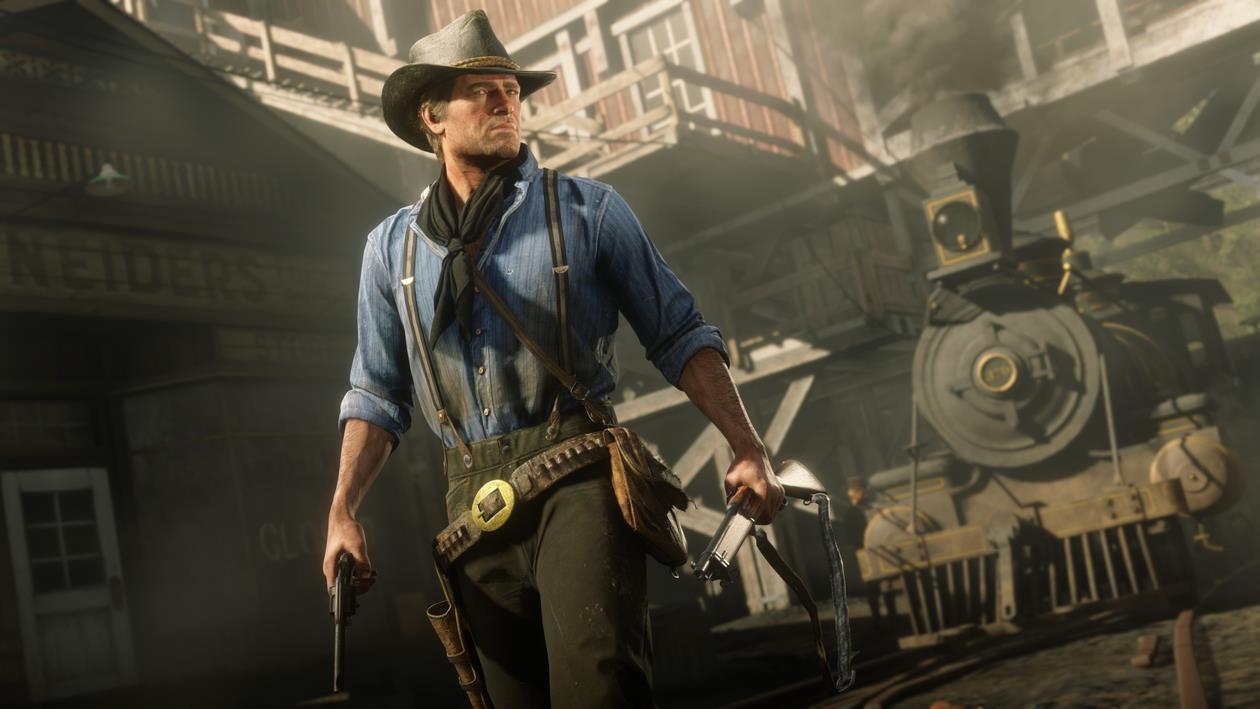 Rockstar continues to be a machine that pumps out AAA titles that find the right balance of action, adventure, story and gameplay. It’s impressive that the company has maintained its standards and still met the demands of the gaming industry. Red Dead Redemption 2 has been out on consoles for over a year now, and it was met with almost universal praise. However, Rockstar had to acknowledge that the game wasn’t going to be read for PC gamers for about a year. They simply weren’t ready to put the product out because they didn’t want it to be a port. A year has passed, and the old time themed sandbox game is still amazing and gorgeous.

Even after a year, it all feels fresh. For those who never played the game and specifically waited for it to launch on PC, the story involves the Van der Linde gang and their recovery from a botched heist in the town of Blackwater in 1899. Horses and carriages are the primary modes of travel for Arthur, the protagonist. Following in the footsteps of previous Rockstar games, the protagonist and his friends are not upstanding members of society. In short, Arthur and the gang are criminals. Yes, they are doing it to support their group but they’re not good people.

The world is just a wonderful environment to enjoy and get lost in. While this isn’t the bustling metropolis of San Andreas or Liberty City like in Grand Theft Auto, there is a different beauty to this game. The flora, endless views off of cliffs and mountains, waterfalls, and many other surroundings immerse a player in the world. It’s easy to get lost in the game and just ride around on a horse finding new things, shooting animals for meat and pelts, and holding up unfortunate riders that the player can catch alone. 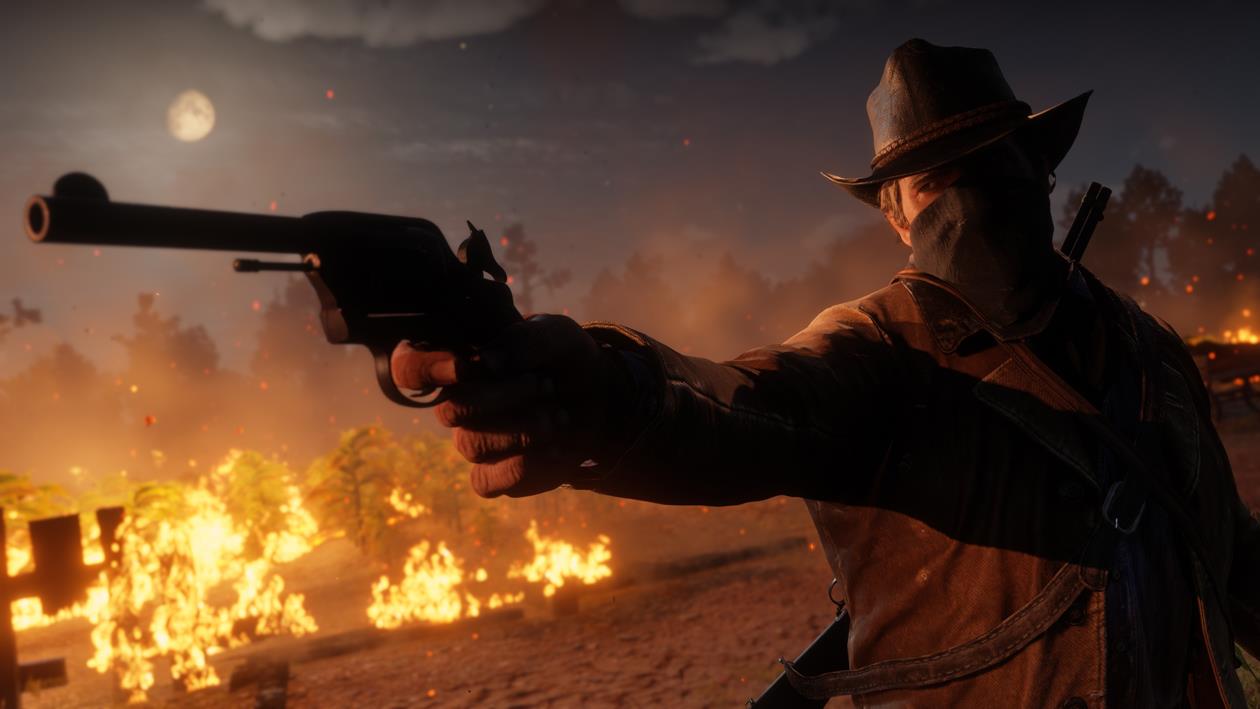 I dipped my foot into RDR2 last year but never dove in because I was one of those players waiting for the PC launch. I had been itching to get a game that could truly push my system to the limits. Rockstar’s warning ahead of the game was that even the beefiest of graphics cards may have trouble running the game on ultra settings. Unfortunately, it took a little time to get into the game because graphical issues and bugs plagued the launch of the game. These things happen, and Rockstar handled it as best they could. However, there was one minor issue… 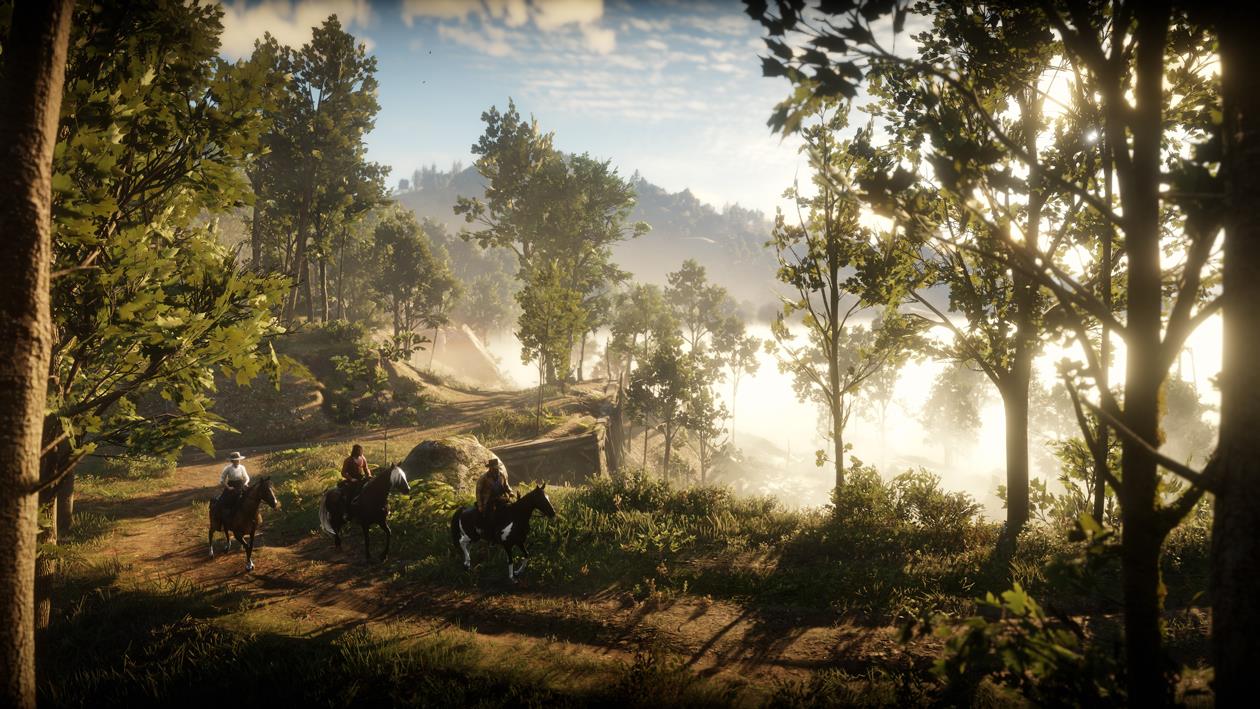 My specs for my PC include a Core i7-8700K, 32GB of memory and a couple of SSDs that are used for booting and data storage, including running some of my Steam games. I was also sporting an nVidia GTX 1060 OC in my system. My motherboard and processor had no issues handling things, but the graphics card was not having any luck getting about the standard settings. Even at the baseline, the right side of my screen was glitching out and losing sight of characters, trees, and whole pieces of scenery. After the patches went through that Rockstar sent out, I hoped that things had been resolved and I could continue on.

Nope. Not even close.

Unfortunately, my graphics card picked the worst time to say, “Carry on without me,” and eventually died. More than likely, this was just very bad timing. However, I was able to replace it quickly with a 1660 Ti thanks to warranty coverage. It made the best of a bad situation, and thankfully it helped with this review as I was able to push the limits of the graphic settings. It’s still not recommended to go with full graphic settings unless you have an incredible system. Maybe those out there with 2080s or the new AMD line can push it up without sending their system into meltdown. As for me, the new card was able to handle the graphics on a more than acceptable level. I hung around 55 frames per second once the new card was installed on my Acer Z35 Predator. I’m happy to report that the game supports ultrawide monitors as well, so there were no black bars on the sides. 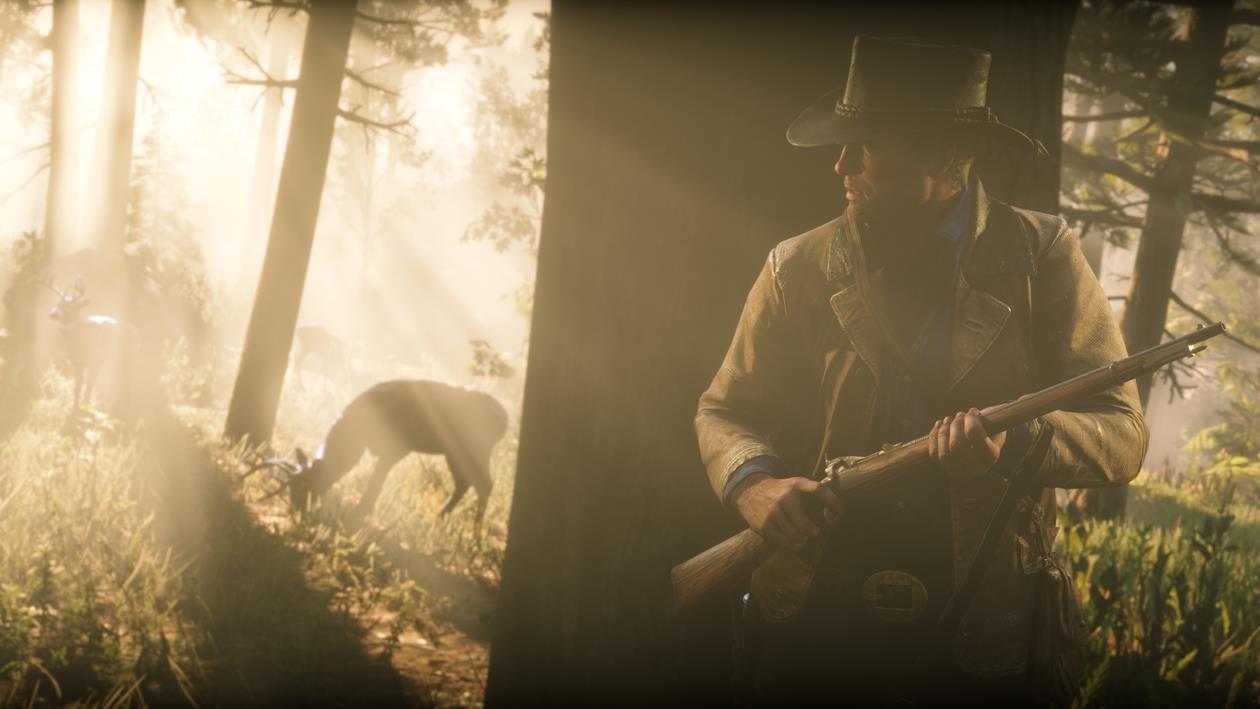 This world is simply stunning. I can’t get over the amount of detail that is crammed into this game. Yes, it’s a different experience than a GTA title, but that’s why it’s so good. In GTA, everything is moving. There are cars, pedestrians, police, fire, etc. Dodging all of those while doing missions and occasionally plowing into a crowd of people might be one person’s niche, but RDR brings a different world that is vibrant and lush with animals, people, and a growing society...even if they’re quite scattered. I know this is a tad redundant but it’s worth mentioning twice.

Arthur’s traversal into this open world is dictated by missions, side quests, or just open roaming. The player will determine whether Arthur sticks to robbing other criminals for the greater good of the camp or decides that everyone is fair game. My favorite part was hunting down bounties, far and away. Each one had a different story and level of difficulty to receive the reward at the end. The very first one made me laugh a bit as it was a literal snake oil salesman claiming that everything he sold was safe, yet it was clear he was out to swindle. Later on those interactions become more challenging, taking on dangerous men who shoot first and ask questions later. 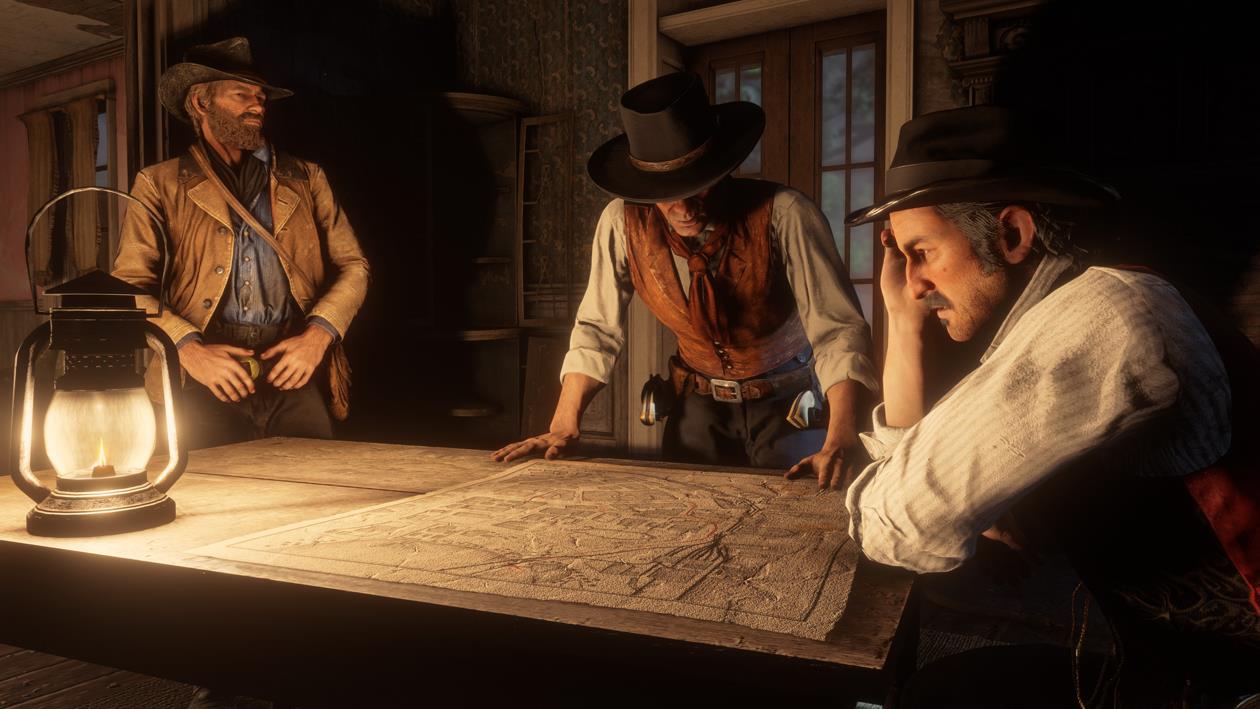 I found myself almost avoiding missions at times because they have a wild disparity in difficulty and enjoyment. I prefer the missions to be action sequences and have a general purpose at the end, yet there’s one mission where it’s all about getting drunk in a saloon and not losing track of your partner. It was disorienting, boring, and frustrating to get through that. However, when missions are full of action, it makes it worth the slog of the other missions. There is one exception to this, and that’s the performance in the theater that made me sit back and enjoy.

Arthur’s character is as good as a player wants to make him. Arthur goes through waves of anger and determination, yet turns into a giant teddy bear when the women of the group are involved. It took awhile for me to warm up to him, even though the biggest draw of Rockstar characters is the fact that I’m playing a criminal who has a story that is generally a dark one. 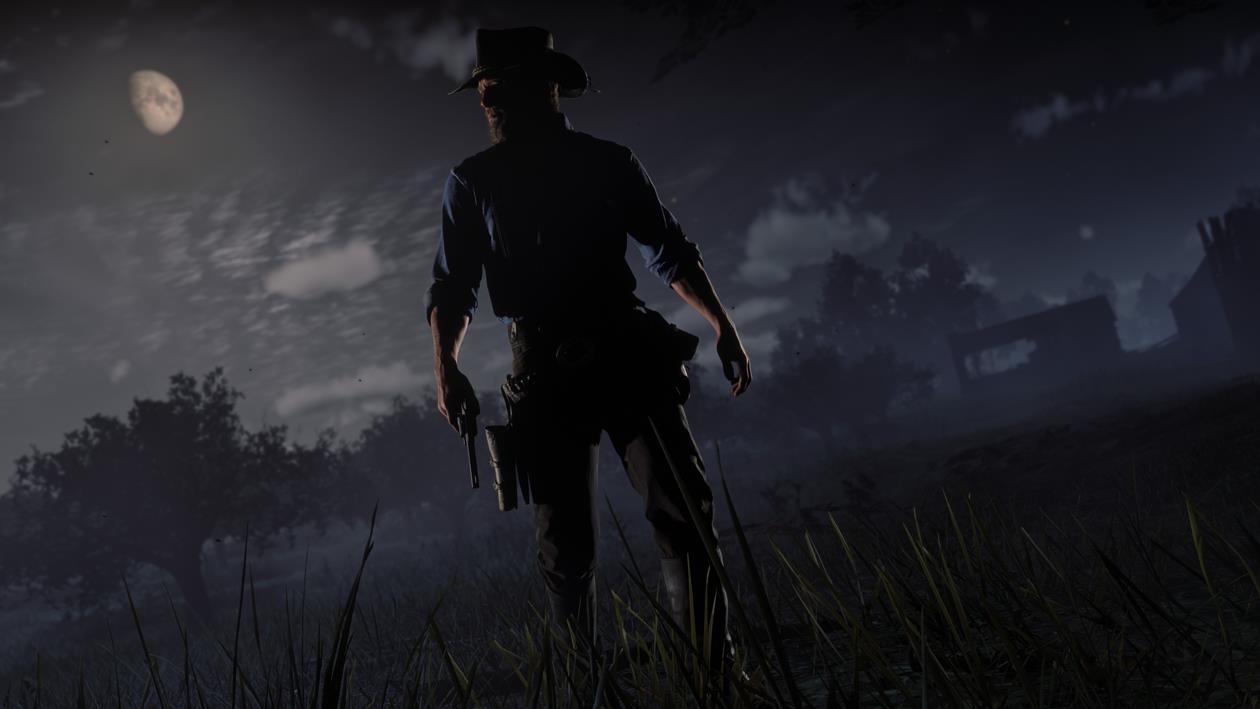 Arthur didn’t really latch onto me like Niko did in GTA IV or any of the main protagonists in GTA V, but over my time of playing with the grizzled gunman, I understood his goal. He simply wants to survive and prosper, and his diary entries helped me understand that. It’s such a nice touch to pull out the journal and read what Arthur is thinking. He may not always agree with his brothers in crime and he may not want to help every person that asks for it, but the soliloquy that he sometimes gives in his many ways makes it worth pushing forward to the endgame. Red Dead Online is a frustrating experience early on but probably worth it in the long run.

Full disclosure: I’m not much for online modes like RDR Online or GTA Online. I have traversed them in the past from time to time, but never for long runs. Red Dead Online is different in that there’s a little bit of everything for players, but the leveling system is rough. I expect there to be a curve to unlocking the best stuff in a game mode, but some of the simplest stuff that should be available to a player has almost ridiculous experience points requirements to hit. I didn’t have much of a thirst for it, so I stuck primarily to the single-player mode. 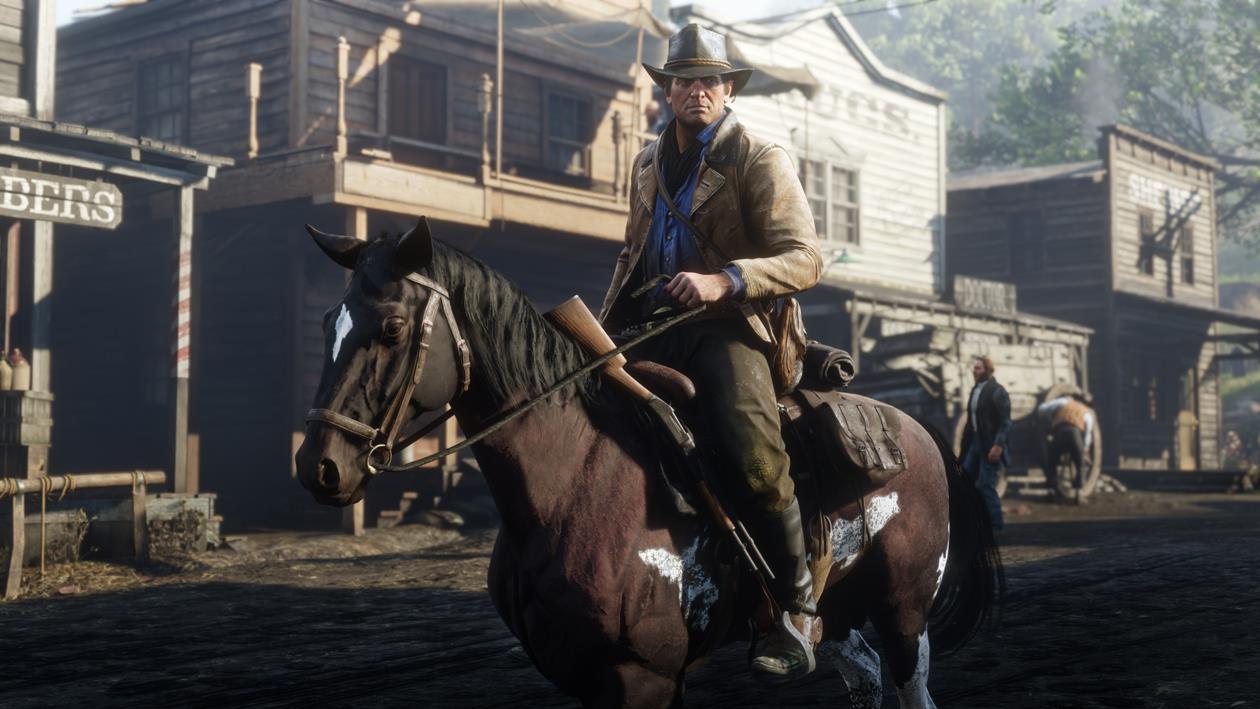 Final thoughts. Regardless of if you played RDR2 on console or not, you’re in for a treat just from the visual upgrades a beefy gaming PC can offer. Arthur grows on you, much like his beard grows throughout the game if you don’t tend to it. There’s a fantastic open world waiting to be explored and is either ripe for the taking or there to build a reputation with. The story flows for the most part, give or take some clunkers when it comes to missions here and there, but it’s worth repeating that for every boring mission, there’s a train heist waiting for you around the corner, possibly. As with any Rockstar game, it’s an open world and you can play it how you want. The campaign itself seems to be around 40 to 50 hours, depending on how hard you go at it. For me, I was perfectly content doing all of the side missions and exploration, and I wouldn’t have it any other way.

A gorgeous world with so much to explore awaits everyone. It's not without some faults, and those with older spec'd PCs may have trouble running this. If you've got the rig to handle it, it's a wonderful experience.