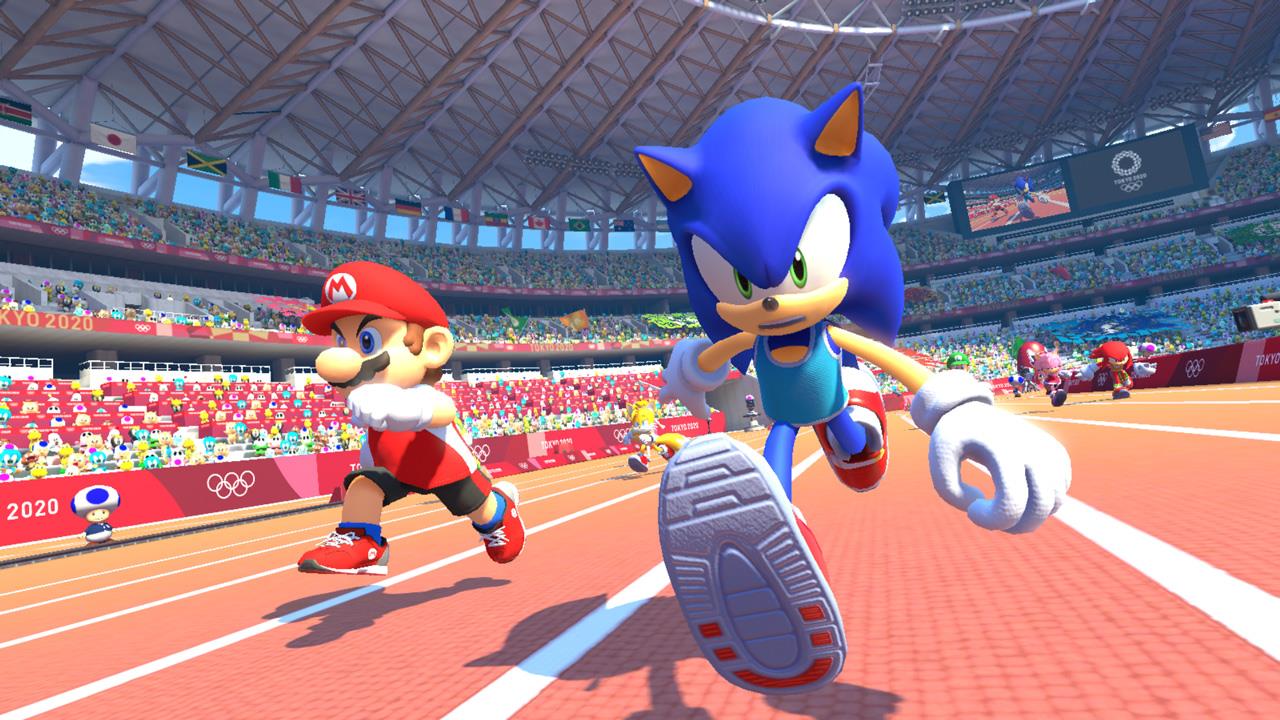 Mario and Sonic at the Olympic Games Tokyo 2020

The story…I’ll give it this, it’s interesting. Dr. Eggman and Bowser have created a new portable video game called “Tokyo 64,” which is based on the Tokyo Olympic Games in 1964, with the intent of trapping Mario and Sonic in it, thus allowing Eggman and Bowser to take over. However, Eggman and Bowser—along with Toad—also get trapped inside the game with seemingly no way out. Eggman lets it slip that they need to collect gold medals to get out of the game but doesn’t quite say what to do with them once they have them. Meanwhile in the present, Luigi and Amy set off to find out what’s up with the game and how to get their friends out. Again the concept is interesting as you go back and forth playing games in the modern times and those from the 1964 Olympics, the latter of which has you play as the characters in their 8-bit forms. However, the story itself seems a bit illogical…well, at least part of it is.

Inside the game it makes sense for Mario, Sonic, Bowser, and Dr. Eggman to compete in the games for gold medals; they’re part of how you can leave the game. In the present though it really doesn’t make much sense. You’ll travel to the different venues finding various characters from the Mario and Sonic universes who can help you out in some form or fashion, such as Tails who’s good with machines, so Luigi and Amy take the game to him to see if he can figure out how the game works and how to get Mario and Sonic out. The problem with this though is that when you find a new character they’ll agree to help you, but only after you beat them in an Olympic event. If I had a friend who needed my help because another friend got sucked inside of a video game, my first response wouldn’t be, “Crap, we need to save them from their predicament or we might lose them forever, but let’s compete in the 110m Hurdles first.” Granted, the present-day group do learn about needing gold medals and think it’ll help on their end, but that’s not until several chapters into the story. Again, the story mode is an interesting concept but it does seem to drag on for a bit as you have to slog through a lot of story text just to play a single event, and this goes on for several chapters. Given how short each event is, you’ll be reading more text than actually playing the events.

The game includes 21 present day events with three “dream events” and 10 events from the 1964 Olympic Games. All of the events can be controlled with just the buttons on the Joy-Cons (such as a pro or wired controller or with the Joy-cons attached to the Switch or a grip) with some games having the option to also include motion controls with one Joy-Con and/or both. When you play an event for the first time the game will tell you how to play depending on which control style you choose, which is chosen when you pick the event. Most of my time through the Story Mode I played with just the buttons, then went into the events via Quick Match and did a few using the motion control methods. While the motion controls aren’t bad, for a lot of events they didn’t seem to add much to the events. That’s not to say I wouldn’t use them at all, as they can make some events more fun or even easier, such as the balancing portion of the Gymnastics event. 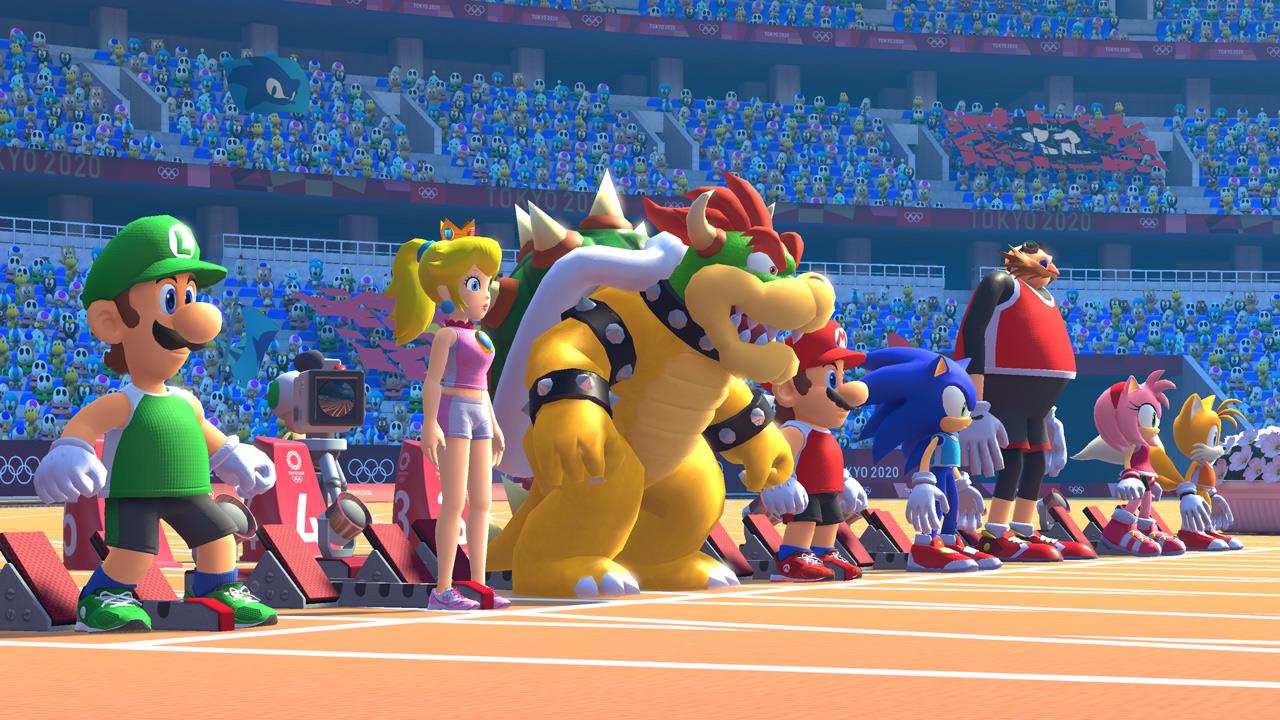 While the Story Mode is an interesting idea, and the events themselves are fun for the most part (still trying to figure out how to score at least a seven on Vaulting after hitting nearly perfects on everything), that’s kind of it. There are multiplayer options that include playing locally with friends on a single console, on multiple consoles, and online. For the local multiplayer options you can pick an event, choose your characters, and you and up to three other people can see who’s the best in that event. That’s fine and all and the events themselves are fun—again, a couple notwithstanding—but then you’ll notice something missing. Something that you’d think would be in a tournament-like setting for the Olympics. There is no tournament mode. Once you complete an event in Quick Match or Multiplayer you can choose to replay the event, choose a new one, choose new characters, or go back to the main menu, but that’s it. There is no tournament option where you can pick several events and compete in them one after the other. That is severely disappointing in a game like this. While you’d think this would be a natural fit for a game like this in multiplayer, even in single player it would add some replayability. Sure you can still try to match your best scores, and there are accomplishments you can obtain depending on your scores, such as hitting at least a 9.50 in the 100m Dash, but not having a tournament-style mode is kind of bewildering for a game like this.

You can also play online in either Ranked or Free matches. Here you can pick which event you want to take part in and compete against up to eight other players online depending on the event. Sounds interesting, except I tried several times to play online and, maybe I was picking the wrong events, but I never found anyone to play with. Most of the time I was just sitting there waiting in the lobby until time ran out and it kicked me back out since there weren’t enough people to play the event with. This might have more to do with the fact that the game has only been out for a couple of weeks, so hopefully I can take another look at this down the road and get some online play in. However, much like offline multiplayer there is no tournament mode online so it’s just single events. 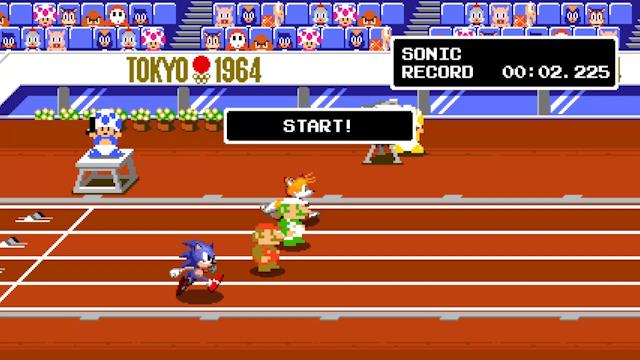 Compounding things a bit more is the lack of unlockables. As you play Story Mode you’ll unlock some extra characters you can play as when you challenge them in various events, such as Zazz in Table Tennis or Espio in the Triple Jump. However, some of the unlockable characters are only available in the event you unlocked them in, so Zazz is only available in Table Tennis and Espio is only available in the Triple Jump. Again, not sure why that is. I get that it’s probably their specialty event, but that would be like in the Mario Kart series if you unlocked the Koopalings but they could only be used on the Airship track. By the way, there are a couple of Koopalings you can unlock and they are restricted to their respective events as well. The different venues you can visit in Story Mode do have a lot of Olympic trivia you can find and check out, which is nice to learn some history of the Olympic Games and the characters themselves. There are also several non-Olympic mini-games you play throughout Story Mode that, once you complete them, you can access them any time you wish. So, the unlockables are kind of a mixed bag for me.

Mario and Sonic at the Olympic Games Tokyo 2020 has a lot of fun moments, but it feels like it’s kind of incomplete. The events themselves are naturally the best part with over 30 to take part in between the 2020 and 1964 games, and thankfully you aren’t restricted to having to use motion controls. However, each event only takes a few minutes at most before you have to choose another one. With no tournament mode it kind of takes a lot out of playing with friends when you can only do one event at a time, as opposed to a tournament format where you can choose several events and see who has the most medals at the end of them, or even give a point system to each medal and see who can earn the most points. The Story is interesting, but when you’re wading through text and walking around the map and venues more than playing the actual events, it can get tedious and boring at times. Overall Mario and Sonic at the Olympic Games Tokyo 2020 can be fun when playing with friends—not having a tournament mode notwithstanding—but it seems to miss the mark overall in these types of games.

Mario and Sonic at the Olympic Games Tokyo 2020 has its moments. The events themselves can be fun and challenging—sometimes too challenging—but overall it misses the mark in a couple of areas. The Story Mode can get tedious and boring when you're wading through text more than playing the events, and the fact that there's no tournament mode is a bit puzzling. The game isn't bad by any means, but it feels like more could have been done to enhance the multiplayer experience and to just add some replayability.