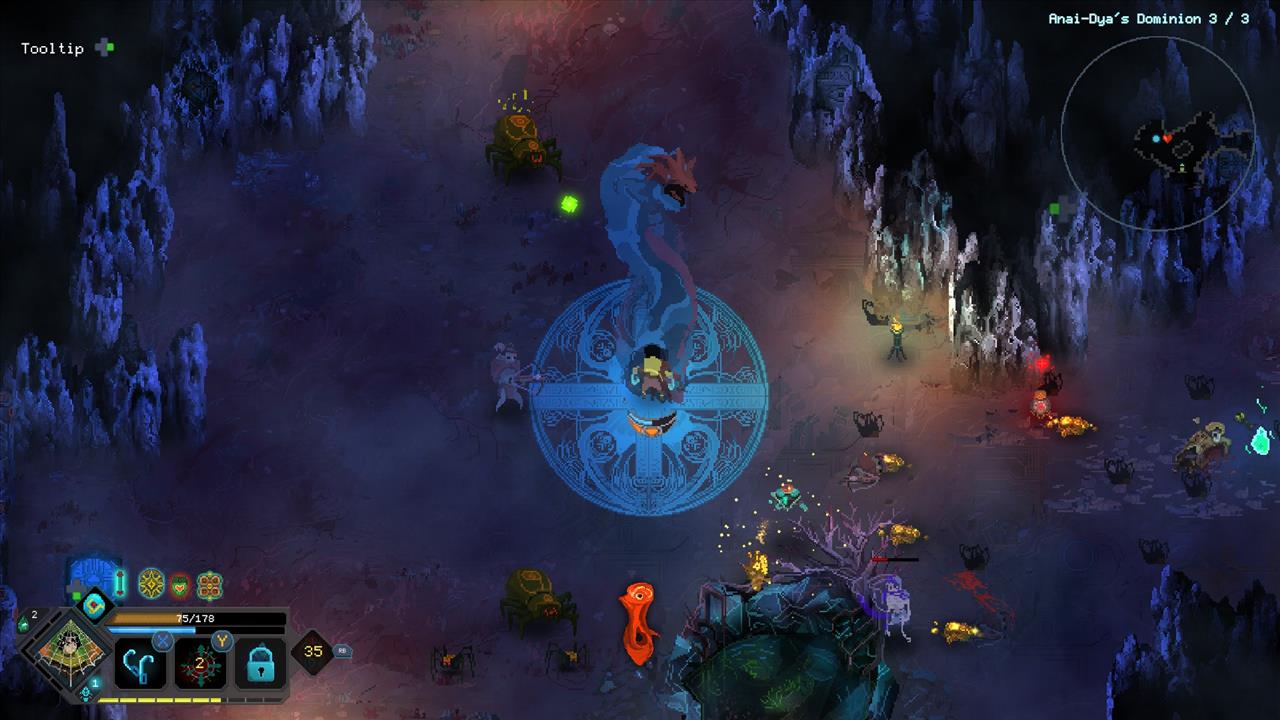 Family is complicated. The interactions between fathers and daughters, mothers and sons, aunts and nephews, uncles and nieces, cousins and cousins. Family has an ever-changing dynamic. More often than not, family members have to discourage one another from doing dumb things. But the Bergsons? This is a family that encourages each of its members to greatness.

The Bergson family are the titular Children of Morta. There’s father John with sword and shield, vocal both in and out of the home. The two youngest are Kevin and Lucy, one is an assassin, the other is a firestarter. The two oldest are Linda and Mark, one is a bard, the other is a monk. Then they bring in Joey, the long-lost cousin with a hammer bigger than Thor. While not playable characters, Grandma Margaret is opening doors and speaking in riddles. Uncle Ben is fighting alcoholism and crafting gadgets. Mother Mary is carrying a ray of light from a god in her womb. And then there’s the Bergson family’s delightful cat and their adopted wolf cub.

I couldn’t have put together a better Dungeons & Dragons group myself. Relying on a family to put a cork in the Corruption belching out of the local mountain god is certainly a better premise than a group of strangers that all meet in a tavern. (That’s an old D&D trope, too.) 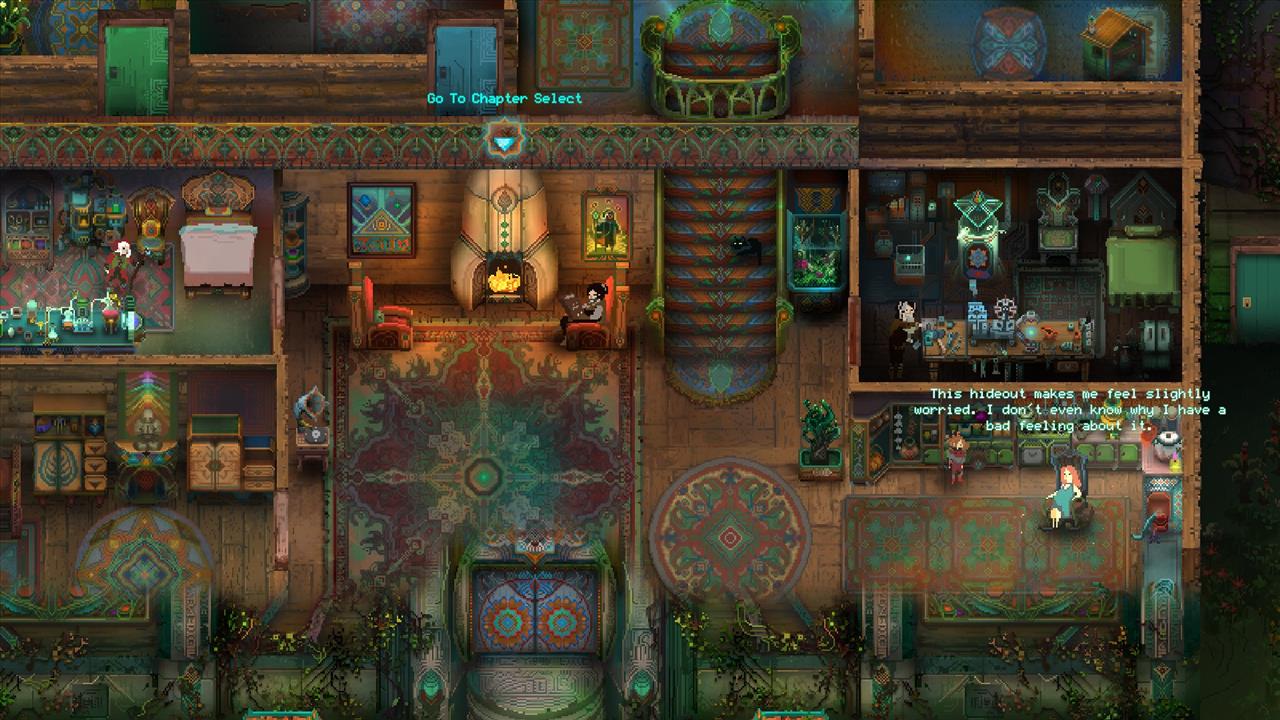 Children of Morta handles things on the homestead with kind words and firm beliefs. But that doesn’t mean there isn’t drama. There’s teen drama and young adult fiction. There’s a dad reaching midlife alongside an overprotective mother bear. All of them have their baggage. All of them grow and learn, on and off the field of battle.

This is an action role-playing game that wants to be handled like a twin-stick shooter. Meaning, it wants you to move through the violently gorgeous top-down environments with the left stick, and then hack, slash, shoot, and burn everything down with the right stick. There’s a roll-dodge that gets you out of the thick of it, but runs you out of stamina. There’s a super attack that brings the pain but operates on a cooldown timer. And there’s all manner of bonuses and powerups and totems and skill sets that stack on top of each other to make every run lather itself up into a pretty good fight. Every inch of the pixel-perfect fighting is taken into account: points added to your damage, seconds removed from your cooldowns, faster pacing in your rush and attack, slower moves from the enemies and traps. 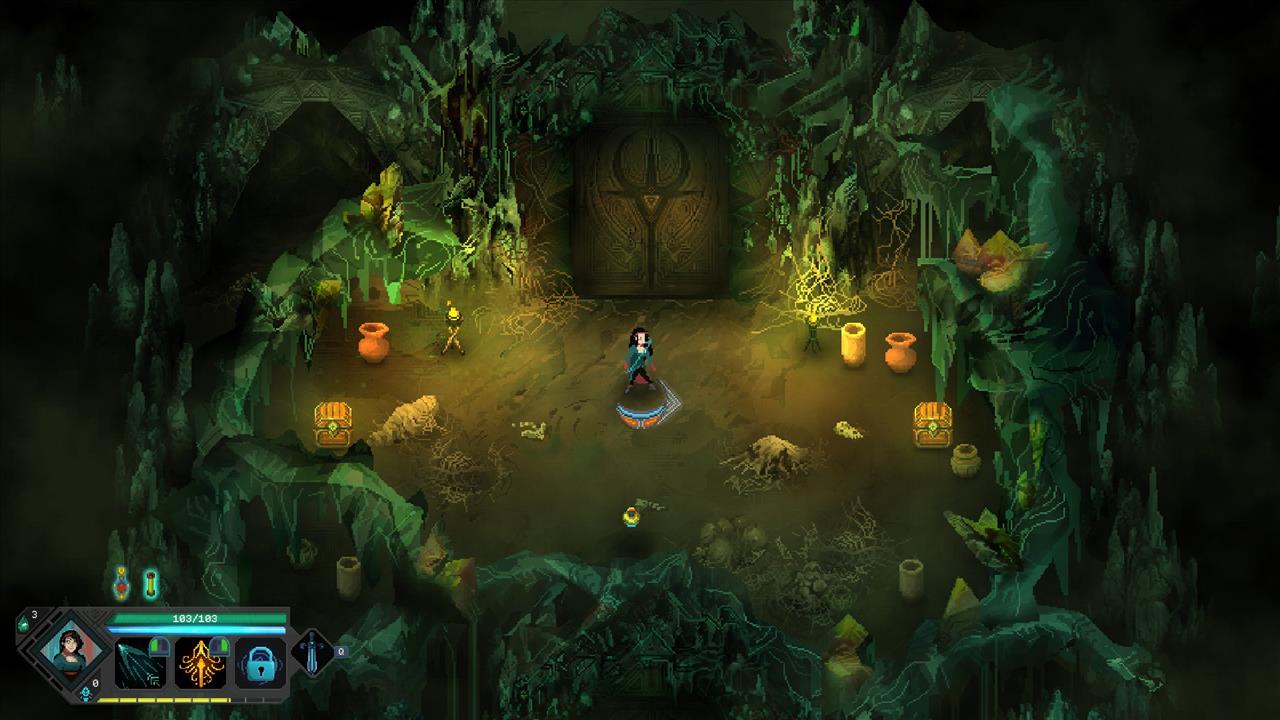 Being a roguelite means that the levels are randomized. Enemy placement varies from, say, the first time you only survive five minutes with the sword-and-board dad, John, and then have a stellar 30-minute blast with the twin-knifing boy, Kevin. You could get lucky and take Linda’s bow and arrow all the way to a boss fight on one attempt, but get stomped into the mud when you send the hammer-swinging Cousin Joey into the fray. Just kidding. Joey is a monster. That overgrown man-child is unstoppable.

But you can’t just keep picking one family member over and over, leveling up just one person that happens to match your playstyle. Because the skill tree is intertwined with the family tree (clever, eh?) As they level up, they unlock abilities for everyone else back at the Bergson mansion. You can’t leave your little firestarter in the dust while you throw your moody assassin into the meat grinder in back-to-back sessions. In fact, to counteract that, if you just had a good run with Cousin Joey, hammer smashing through that last level with the best of the Bergsons, he’ll catch Corruption Sickness that will drastically reduce his max hit points unless he gets a few days’ rest. Developer Dead Mage already has you figured out. 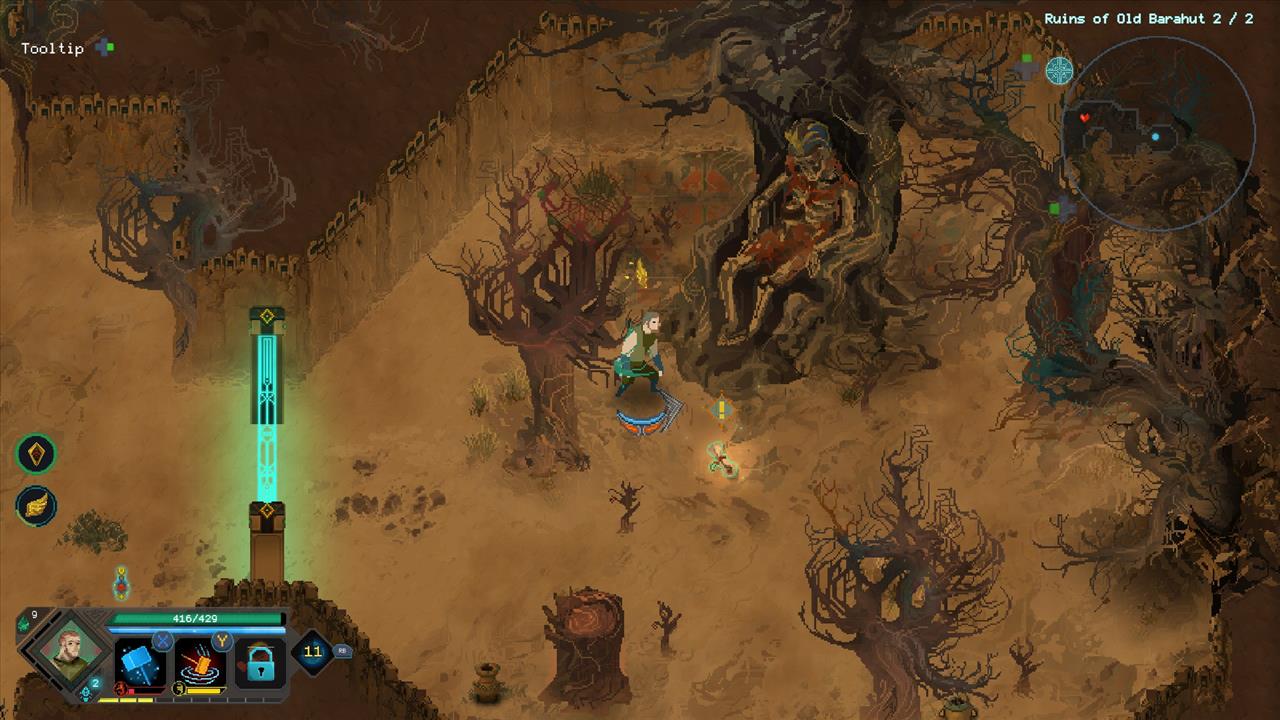 Children of Morta is a tough game, though. There’s a reason the levels and mobs rearrange themselves in a roguelite manner. It’s because each section of each level is meant to be tackled multiple times. But no matter how many times I was sent back home between defeats, there was always a snippet of family story to fill me in on. In an ever-changing world, the Bergons’ home was a constant. And the grandfatherly narrator kept the story flowing. There are a ton of flattering comparisons I could make between Children of Morta and developer Heart Machine’s Hyper Light Drifter. But the biggest difference is Morta’s wonderful narrator, filling in lush details where Hyper Light Drifter’s unspoken narrative maintains its own brilliance. Both games excel in their narrative aspects while hanging out at completely opposing ends of the show-don’t-tell spectrum.

But yeah, tough game. I had to level up my archer a half a dozen times, through dozens of defeats, just to finally topple the first boss. The Children of Morta are all attending the homeschool of hard knocks. And these boss fights aren’t set up like a typical boss rush. You don’t get a quickload outside the boss’s door so you can run back inside and immediately try again. When you die, you instead go straight home and head right up to your room, young man—and you think about what you’ve done. Even if you try and make a beeline for the boss (which you can’t technically do because the level has been rearranged since your last visit), you’ve still got a good 10, 20, or 30 minutes of roguelite fighting of all those respawned enemies on that map. But whenever I hit a wall with one character, another would unlock, and I would have a strong run with that one. And when I’d hit a wall with that one, I’d circle back around to a previous family member and have a revelatory moment with them. 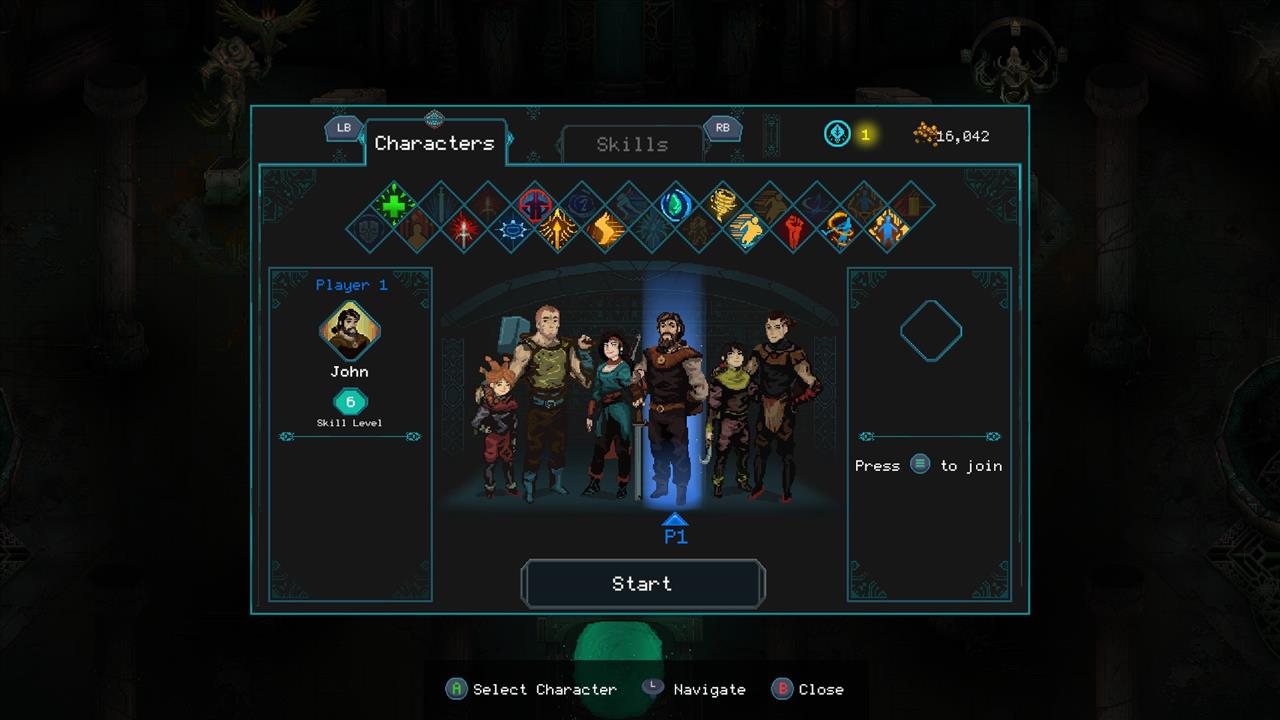 The Bergson’s home is gaudy with detail. The whole place is vibrant with life and magic from aquarium to kitchen, from hearth to hallway. It’s impossible to take in all the details at once. Almost hurts your eyes to try. You’ll see something new every time you return home. One thing I always do between levels is scour the place for the Bergsons’ cat. Is it on the upstairs bannister? On the fence-lined overlook? Batting a ball of yarn on the living room area rug? There are no trophy unlocks for finding the cat. It just gives me a minute to soak in a few more details. The activity speaks to how miraculous of a place it is.

Then you get back out there, fending off the foul, inky blackness pouring like a tsunami over the science-fantasy landscape. The formula here works wonderfully. I was pretty sure I’d get sick of it, but I never did. Stepping into each procedurally hobbled-together level felt good every time. I’d hug the wall all the way around in order to reveal each map in its entirety. No stone left unturned. I’d run halfway back across the map if I thought I’d missed some chest or vase while ripping along in a blindingly fast melee, because when it comes to treasure, every coin counts. 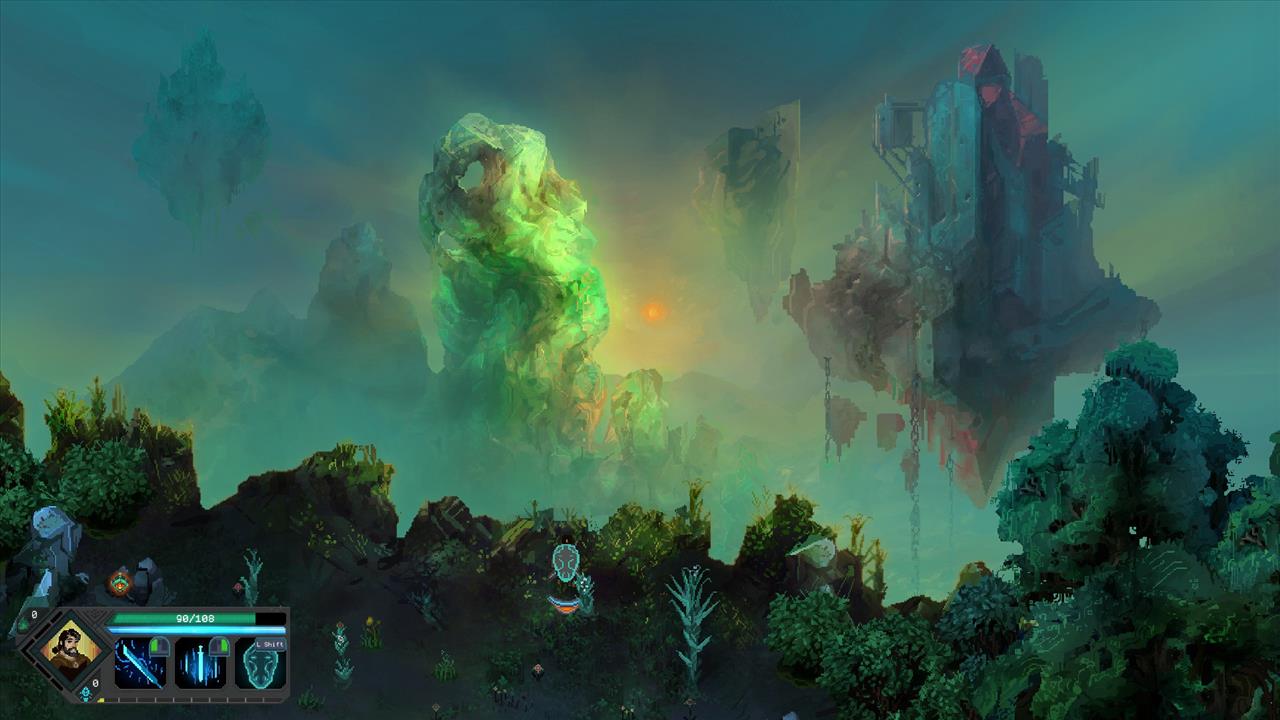 Children of Morta strikes a perfect balance between up time and downtime. A part of me wants to appreciate the combat more, or appreciate the story more, but it’s a tie for first place. Whether I wanted to put a proverbial smackdown on an unholy horde of bad guys, or if I wanted to watch the Bergsons gather at their dining table filled with food and brightened with candles, I couldn’t help but push both agendas. During a mission, the only sin was sitting still. When at home, the only sin was leaving.

Every member of the family is built up—loving, learning, and sharing—until they all form a familial Voltron around each other. Children of Morta is the most visually striking, and emotionally tender, action-RPG I’ve played all year. It's got enough thoughtful moments to make me rethink how my own family gatherings should go.

The family that slays together, stays together. When it comes to striking a balance between raucous gameplay and dramatic discourse, Children of Morta is an absolute gem.