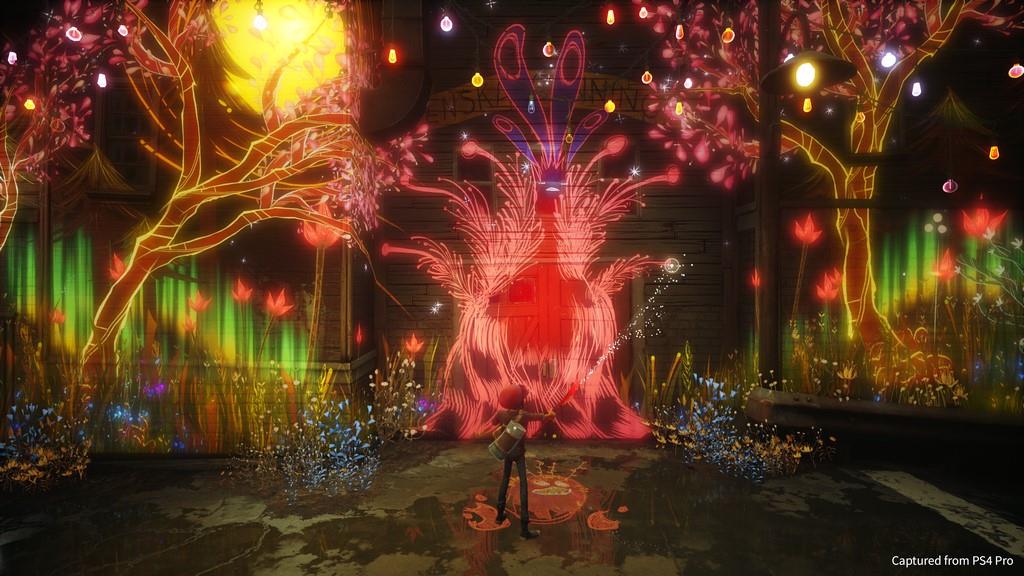 In a Fall game season full of the typical shooter sequels, superhero romps, and remasters of classic titles, it's delightfully refreshing that something as original and positive as Concrete Genie can create the buzz that it has. There is very little violence in Concrete Genie. For most of the game, there isn’t any combat at all. The lightest of stealth elements provide the tension in the game, and that tension is really more narrative than gameplay based.

Yet Concrete Genie is a blast of fresh air blown into the stale halls of gaming, a burst of color and life that comes darn close to creating a new genre. And while not a kids’ game, this is an experience that can be enjoyed with a family (so long as you are willing to have some explanatory conversations). I played much of Concrete Genie with my two young children in the room, and they found watching the game as delightful as I found playing it.

Concrete Genie centers on Ash, a young artist who whiles away his time drawing in his sketchbook, creating fantastical landscapes and characters. Ash used to live in the city of Denska, but industrial accidents, poor leadership, and urban decay have rendered this port town an uninhabitable waste. Yet Ash finds himself drawn back regularly to his childhood hometown, either for comfort or inspiration. He sneaks off to the piers and factories of Denska to fill his sketchbook with his dreams of the city’s recovery.

Denska is now abandoned, seemingly only occupied by a roving band of child bullies, and they do not appreciate Ash’s artistic leanings one bit. They have covered Denska in mean-spirited graffiti taunting Ash, and when they find him perched on a post sketching, they reward him by ripping the pages from his sketchbook and scattering them to the four winds. Ash is granted a one-way trip to the local lighthouse—home of the “ghost of Denska.” 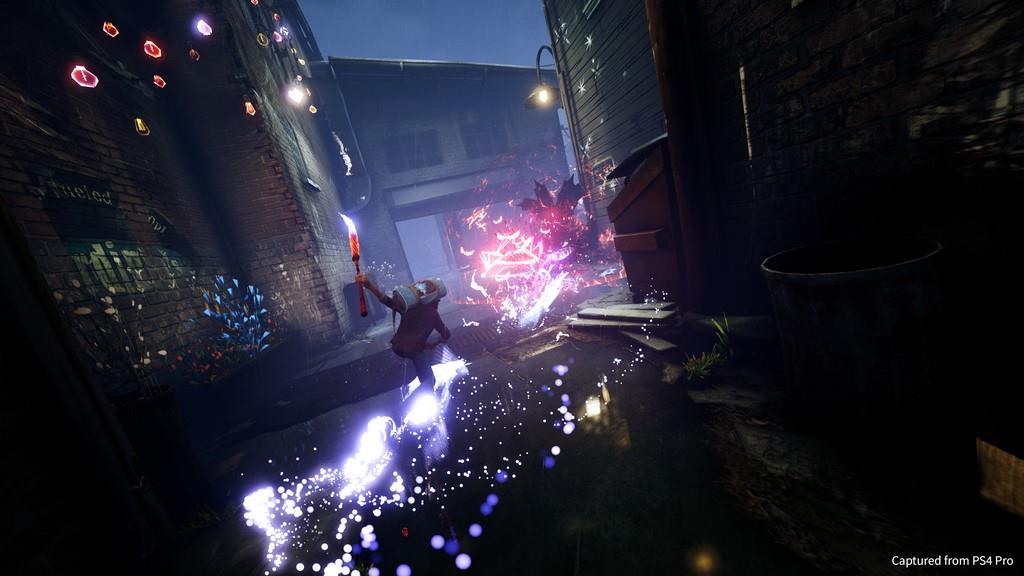 The ghost is actually a genie—a cool two-dimensional creature bound to Denska’s walls. The genie grants Ash the ability to restore life to Denska though the power of art. After this brief introduction, Concrete Genie is off and running, with Ash moving from zone to zone throughout Denska, scampering over roofs and walls like an adolescent Nathan Drake, slathering artwork over every available surface, and freeing the town from the wastes that have choked the life from it.

As he progresses, Ash must avoid the gang of bullies. Though to be honest, the bullies aren’t a terrible danger, and getting caught by them only wins Ash a trip to the local dumpster. He brushes himself off and gets right back to work. The bullies, in fact, provide much of Concrete Genie’s sizable heart. I won’t spoil anything, but I can say that Concrete Genie understands that a gang is made of individuals, and children don’t end up stalking the street of a dead town unless something in their lives has gone drastically wrong. 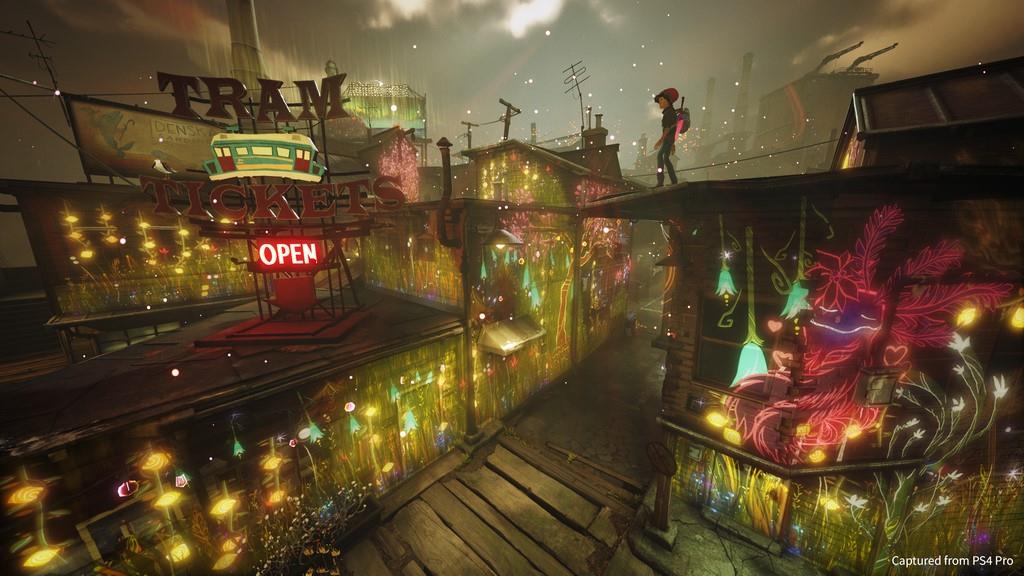 Indeed, Concrete Genie does not put many barriers to progress in front of the player. Puzzle are mostly simple (though satisfying), and the light stealth elements are a fun distraction, but never too difficult to overcome. When dynamics take a turn and combat does enter the game, it is smooth and enjoyable, and not overly challenging. Concrete Genie correctly stays out of its own way and lets the player get to work with some of the most fun and engaging creation tools I’ve seen in a game.

As Ash explores the barren streets and tunnels of Denska, he splashes blazing landscapes on the gray walls, bringing color and life to the sad remnants. These murals are animated with shimmering brilliance, an HDR-laden blast of luminescence in the shadowy city.

The tools the player uses are as brilliant as the murals themselves. Concrete Genie is one of the very few non-VR games to take advantage of the DualShock 4’s motion capabilities. Players chose the pattern they want from a growing palate, then aim a cursor at the surface they want to paint. Then, holding a button and guiding the cursor by physically moving the DualShock, the players paint gorgeous scenes and landscapes on the wall. The patterns burst to life, eventually turning the entire city into a glowing canvas. Concrete Genie remembers every artwork you create, making touring the streets from earlier in the game a treat. 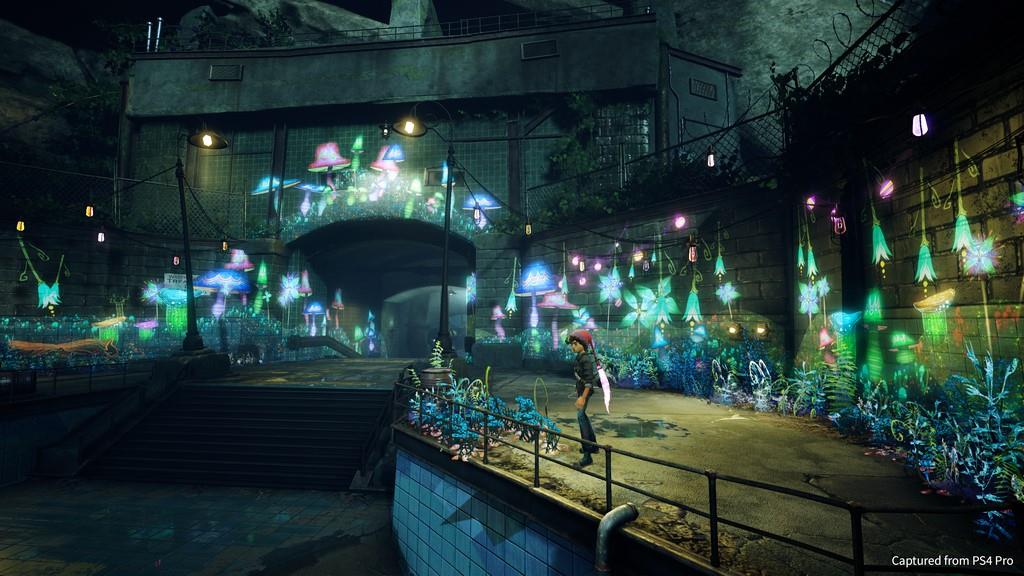 Gameplay-wise, the player is challenged to light up strings of dead light bulbs that are strung around Denska by creating artwork in their vicinity. Though it is possible to just slather any old thing over most of these walls to meet the games’ requirements, I imagine that most players will be like me and will actually attempt to create something appealing.

Players are assisted in their mission by various genies, which gallivant along walls of Denska, goofing off and helping with puzzles. Players create these genies by painting on horns, appendages and features, and no matter how unholy your creations might seem, Concrete Genie finds a way to make them appealing through animation. Genies play with each other, goofing off and interacting with the art you create on the walls. The effect is beyond clever. It grants a feeling of life and playfulness like nothing else I've seen in video games.

Also stunning is the VR minigame that is included with Concrete Genie—a prime example to other developers of how to include a VR component that is polished and fits with the rest of the package. While brief, the VR segment has players using the move controllers to create artwork in a 3D environment with effects that are simply stunning. 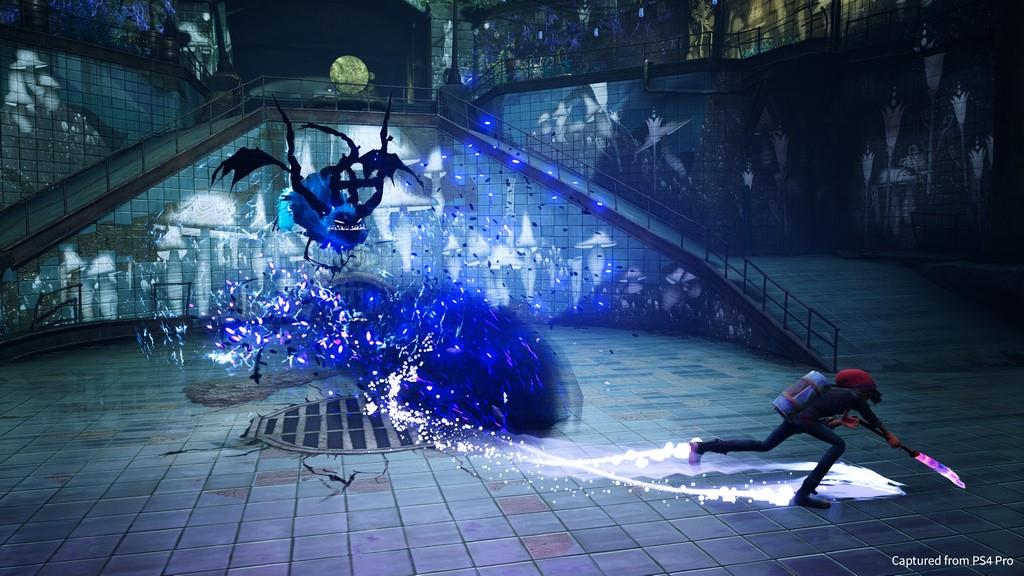 While you might initially feel that the VR portion of Concrete Genie is just more of the same game, just in 3D, the game soon blows the walls of the experience out to reveal a solid little chunk of gameplay that is rewarding and visually stunning. It is also gratifying that the VR gameplay in Concrete Genie works better on a technical level than many recent full-fledged VR games, showing that care and love were taken in its creation.

I have simply never encountered another game that looks or feels like Concrete Genie. This is a game that bursts with life, from the amazing genie characters to the Rankin/Bass-style animation of Ash’s facial features. By not crushing the player with needless challenge or obstacles, Concrete Genie allows the focus to remain squarely on the joy of creation.

The originality and artistry in Concrete Genie shine through in every moment. It is rare that a game comes around that feels truly new and original, and the fact that this game exists in such a polished and playable state feels audacious, if not approaching revolutionary.

When future gamers look back on the defining games of the PS4 generation, Concrete Genie will certainly be high on the list. At the very least, this is sleeper hit. If the world is right and just, Concrete Genie will be acknowledged as a game-changer—a video game that eschews violence for values like empathy and humanism. Concrete Genie is one of the most rewarding games I’ve ever played.

Concrete Genie is one of the best games of this generation—an experience that expands the parameters of what video games can be. By embracing values like artistry, empathy, and beauty, this is a title that will appeal to gamers that might be feeling a bit world-weary, bringing color to a world that has been feeling a bit gray lately. If you have ever wondered why video games have to be so violent and dehumanizing, then do the industry a favor and support this game. And lest I forget to mention: Concrete Genie is a lot of fun to play.