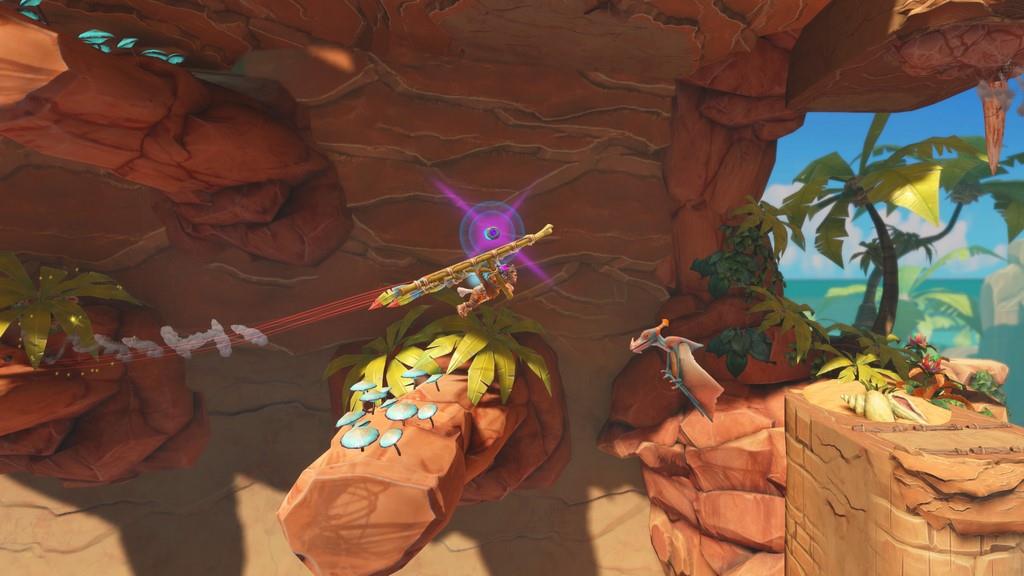 Regular readers of Gaming Nexus know that I’m a sucker for a good cave man game. I liked Far Cry Primal a whole lot more than it probably deserved because they reconstructed the proto-Indo-European language, guys, but even less anthropologically-accurate renditions make me happy. Case in point, Jet Kave Adventure, a 2.5D side-scroller that cheekily admits in its title credits that early humans definitively did not exist alongside dinosaurs…but aliens are up for debate.

Developed by studio 7Levels, Jet Kave Adventure concerns a cave man chief named Kave, who is kicked out of his village when he fails to bring back any food for his snacky citizens. Kave dejectedly wanders the wilderness, feeling hungry, until a flying saucer crashes nearby. The cyborg aliens inside determine that the best way to gas up their spaceship is to snatch some powerful crystals out of a nearby volcano. The problem is that doing so will cause the volcano to erupt, destroying the island paradise that Kave and his villagers call home. The aliens don’t seem to care much, but Kave certainly does, and in their haste the aliens carelessly discarded a jetpack, which the curious Kave quickly commandeers. Yes, the whole plot is a very whimsical take on Roadside Picnic, relayed entirely by abstract thought bubbles above characters’ heads and the occasional narrated interlude.

The jetpack is the game’s core gameplay conceit, allowing Kave to hover for a couple seconds and perform a versatile dash move, which can be used for anything from a last-second save to blasting through stone barriers. Kave acquires a few other abilities too, including flinging rocks with a slingshot, dragging giant stone blocks, and smashing anything in his way with a club. That said the platforming is the meat and potatoes of this experience, and it’s clear that 7Levels cribbed a lot from a certain tie-wearing simian. Jet Kave Adventure borrows heavily from the Donkey Kong Country series, both the original 90s Rare trilogy on the SNES and the Retro Studios revival of the past decade, and this is reflected both in Kave’s tropical environment and the general rhythm and feel of the gameplay.

This isn’t necessarily a bad thing. It’s clear that 7Levels have a lot of love for the DK series, which is reflected in the respectful imitative nature of the caves, jungles and beaches that characterize Kave’s island home. Kave himself moves with much the same lumbering-yet-fluid gallop cadence as Nintendo’s original mascot, and his jetpack calls to mind the various traversal-enhancing abilities sported by DK’s sidekicks in the Country Returns games. Jet Kave Adventure also does its best to recreate the timing-heavy platforming of the DK games, and for the most part it succeeds. While it is orders of magnitude easier than any of the DK series—any seasoned platformer fan will breeze through Jet Kave Adventure without breaking a sweat—there are still plenty of tricky sequences that take a solid grasp of rhythm and mechanics to execute.

This is where Jet Kave Adventure shines and possesses that compelling platformer quality that keeps you pushing forward to see what challenge or new thrill just one more level will bring. I found it surprisingly difficult to put down even after conquering a world or two, which is no small feat considering the absolute glut of so-called “retro” sidescrollers clogging up Steam and the Switch eShop. Jet Kave Adventure hits that rare (no pun intended) balance of challenge and joy that so many other platformers don’t even approach.

Unfortunately the experience is not consistent all the way through. The boss fights are a touch obtuse; I died several times fighting them, but not because the fights themselves were hard, but because the game didn’t clearly telegraph the strategy for defeating them. Once I puzzled out the patterns beating them was a snap, but getting to that point was unnecessarily obscure. I kind of wish the bosses were a little tougher, faster or hit harder rather than just being confusing. The game also includes a number of horizontal chase sequences, which were overall pretty fun, and reminded me of the mining robot pursuits from Metroid: Samus Returns.

There are also a handful of vertical jetpack escapes at the end of a few levels, which are less enjoyable. These play out a bit like a bullet hell shooter, throwing fast-moving obstacles, enemies and hazards at Kave. There’s nothing inherently wrong with that, but Kave is relegated to the very bottom of the screen, which makes him difficult to keep track of, and the hazards come so fast that it’s nearly impossible to avoid them on your first few attempts. The only way to get through these, like the bosses, is through aggravating trial and error. I know the DK Country series had those infamous minecart tracks (and later the rocket barrel courses), but somehow those felt less cheap than these vertical kill courses. 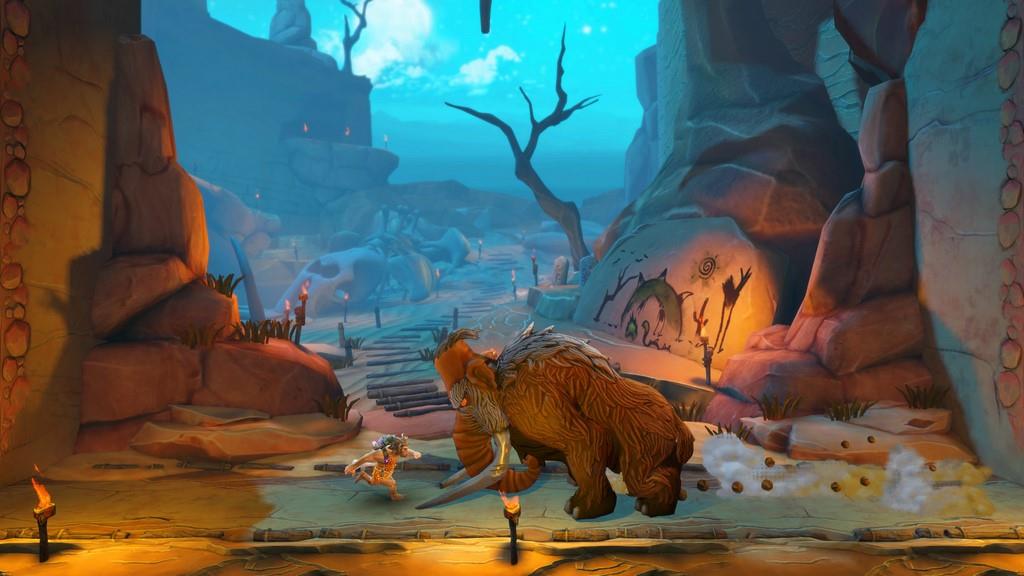 Thankfully these don’t show up too often, and their interruption of the core gameplay is minimal. Which is great, because the majority of what’s on offer here is legitimately a lot of fun to play through. It looks pretty good too. The graphics won’t be winning any awards but the art style is distinct, vivid and gets the nonsensical cave man themes across effectively. I particularly like the depth of field effect that blurs out details like palm trees and vines that stretch out to “touch” the inside of the screen. My only real issue with the graphics is that they could use more differentiation. There’s a lot of detail packed into each level, which is fine, and the foreground and background elements add a real sense of depth to each environment, but it’s difficult to pick out Kave and other important elements. All too often the visuals blend together into a morass of colorful noise, which makes it hard to keep track of your character, enemies and objects like health. It’s not a deal breaker but it does take some time to train your eye to play this game.

There really isn’t a lot more to say about Jet Kave Adventure. It is, in a word, solid. It has a fun, goofy premise, a likeable lunkhead of a lead character, and challenging platformer gameplay that (usually) doesn’t get too obnoxious for its own good and at its best is a decent enough homage to the old Donkey Kong games that inspired it. Jet Kave Adventure is a competent B-tier release from some clearly talented people at 7Levels. It’s not particularly lengthy, difficult or groundbreaking, but it is fun in an addictive, popcorn sort of way. I’m not sure I’d pay the full $20 for it, but at the $15 it’s currently on sale for, it’s definitely worth adding to your Switch library.