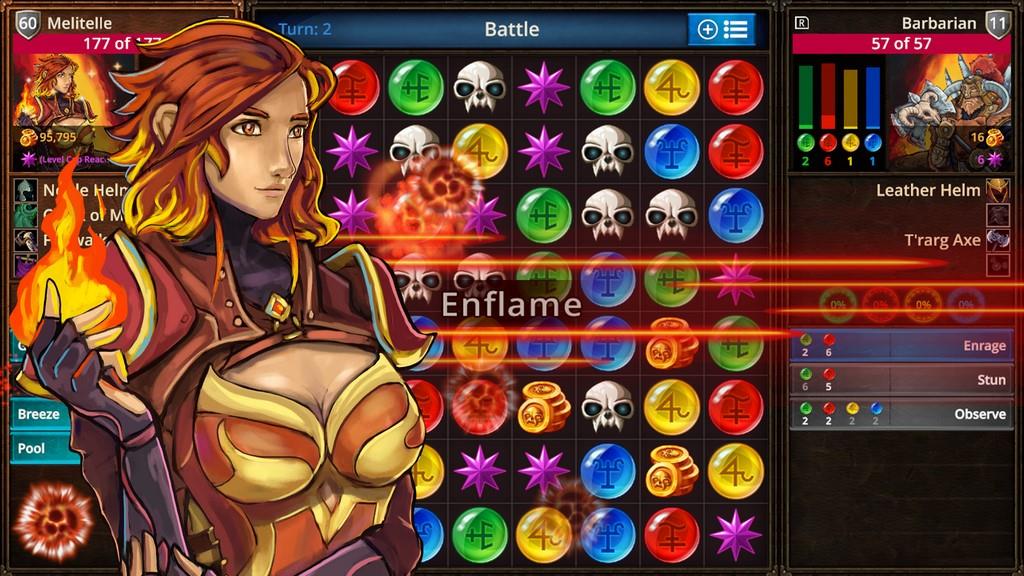 Written by Sean Colleli on 10/15/2019 for SWI
More On: Puzzle Quest: The Legend Returns

Long before King Digital was extorting microtransactions from baby boomers with its junk food-crushing mobile games, the match-3 genre was ruled by another name. A little game called Puzzle Quest: Challenge of Warlords arrived on the Nintendo DS and PSP in 2007, and took the portable scene by storm. Developed by Australian studio Infinite Interactive, Puzzle Quest wasn’t the first match-3 puzzle game (that honor goes to 1994’s Russian DOS game Shariki), but Puzzle Quest was definitely the game that kicked off the second match-3 fever after Bejeweled’s initial craze.

Puzzle Quest did something groundbreaking: it combined the already addictive match-3 gameplay with a fantasy story and RPG leveling elements. The result was a deceptively simple witch’s brew that hooked anybody who played it. Puzzle Quest was like Brain Age, Mario Kart DS or Nintendogs; everybody who had a DS eventually ended up with a copy, and from then on they couldn’t put it down.

But as I said, the idea was watered down and ripped off endlessly in the following years, to the point that match-3 puzzles are something of a punchline these days. Now the original game has been remastered for the Nintendo Switch (and other platforms) as Puzzle Quest: The Legend Returns, but in the wake of so many imitators, can it still enthrall as it once did? Well, the core of Puzzle Quest’s habit-forming appeal still comes through as strong as ever, but the peripheral elements haven’t aged quite as well. 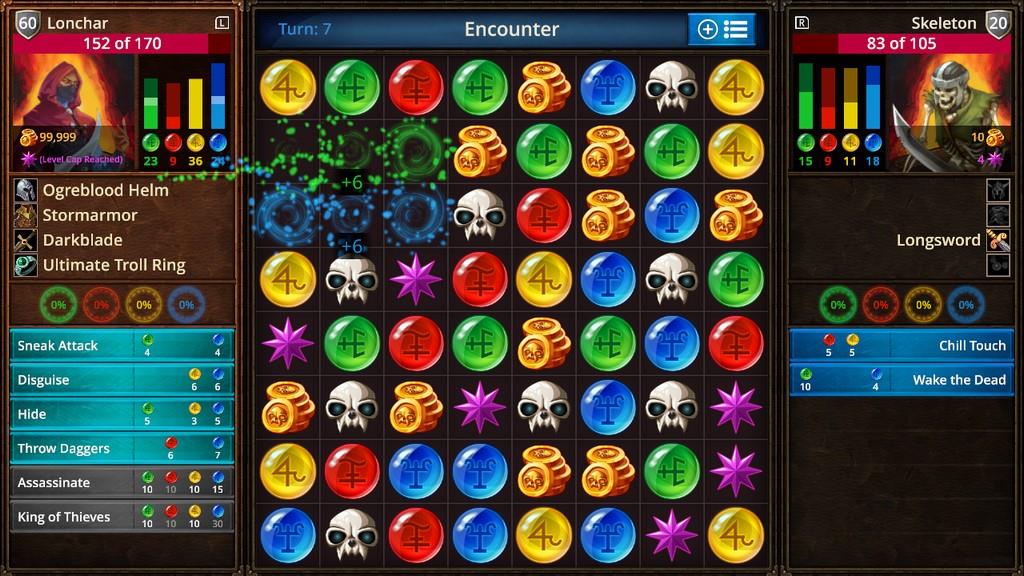 Puzzle Quest begins the way a typical RPG does, with you choosing a class. This remastered version adds five new classes to the original eight for a total of thirteen, and each class doubles as a difficulty level. Your standard classes like warrior, paladin and mage make up the easy tier; knight, rogue and druid will give you a balanced challenge; warlock and elementalist crank the difficulty up to hard, and the new blood mage class is the only one to offer very hard difficulty. The class you choose determines the balance of MP points you earn and the various spells and abilities you can unlock and utilize. This is, ironically, one of the few RPGs I’ve played recently where the class you choose matters considerably. If you roll a priest and expect to play like a rogue, you’re gonna have a bad time. After sinking several hours into a recent replay of Skyrim, this was a bit of a rude awakening. It’s also important to note that if you change your class, you have to start your quest over.

Regardless of the class you pick, the story is about the same. You’re a recruit in training for the local kingdom of Bartonia, but before you begin your tutelage in earnest your father calls you back home to pass on a mysterious artifact and some words of wisdom from your deceased grandfather. Upon returning to the castle you get to work learning the ropes of the match-3 battle system, and once you know the basics you can accept a variety of quests from your home castle and the surrounding provinces. 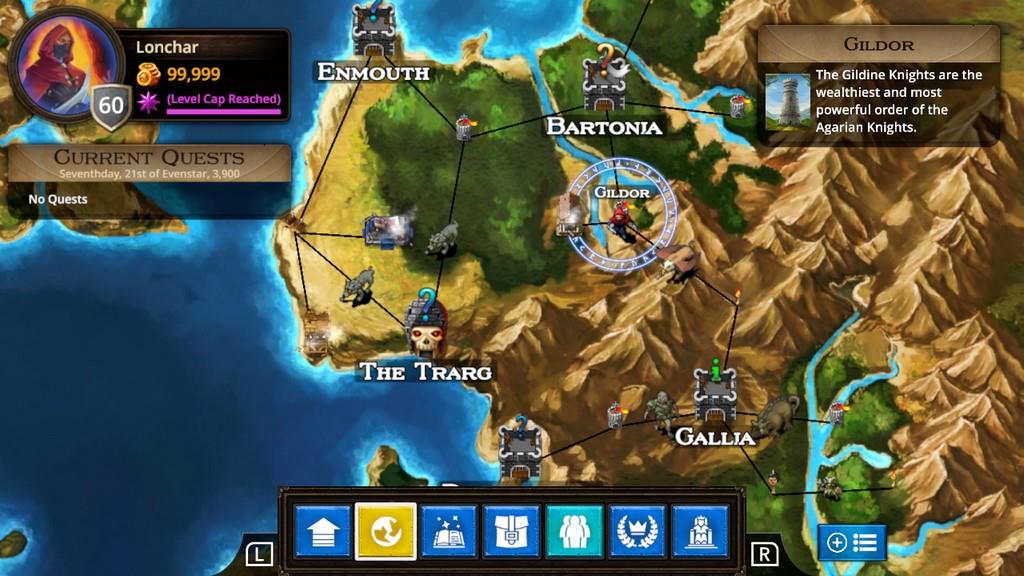 All of this is presented in an overhead map that’s very reminiscent of the quick-travel systems from early 2000s RPGs and visual novels. Towns and castles will have a glowing question mark above them if they have any quests open, and at your kingdom you can visit various shops for weapon and armor upgrades or hit up the tavern to buy information. It’s all very rote and typical and the art is disappointingly generic, but it adds a layer of complexity and narrative that most match-3 games just don’t have. It’s what made puzzle quest so novel back in 2007 and it still goes a long way to give the puzzle gameplay some much-needed context and breathing room.

That said Puzzle Quest lives and dies on its puzzle gameplay and that is just as meaty and challenging as ever. The game presents its battle grid as a typical match-3 puzzler, but the implementation of the various colored jewels is what sets it apart. Red, blue, green and yellow gems can be matched in sets of 3 or more and each color powers up a different kind of mana. Your spells and abilities—essentially your special moves—require different combinations and amounts of mana to cast; for example a fire shield costs 5 red and 6 blue mana. Meanwhile, skull gems do damage to your opponent’s HP, gold gems net you money, and purple star gems earn XP. 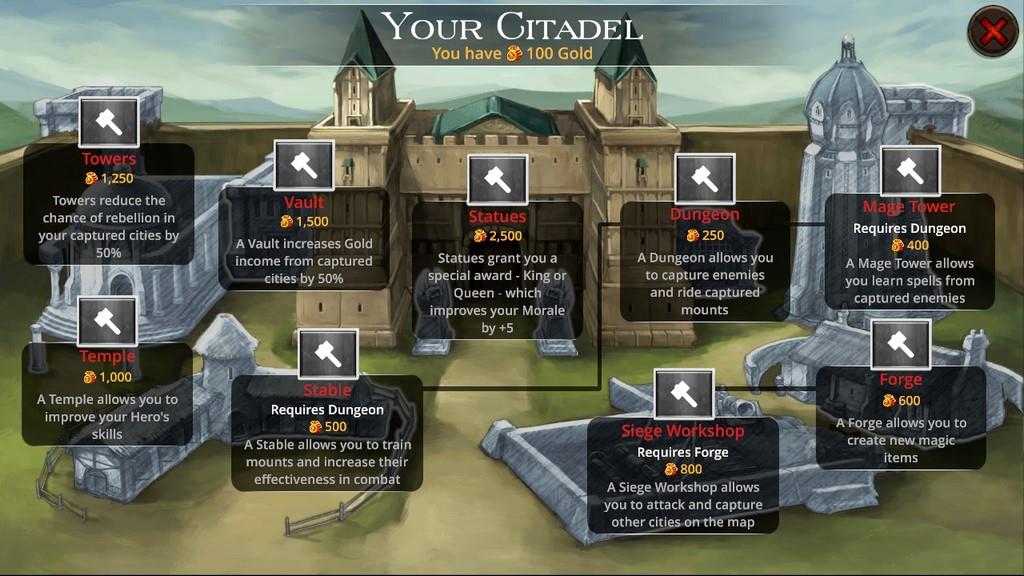 You can just try to match skulls and wear down your enemy as quickly as possible, but once you run into the more skillful enemy AI this won’t be nearly enough to win. Puzzle Quest is all about strategy, and you need to pay close attention to how much mana you’re earning, when to use crucial spells, and of course do your best not to line up a killer skull combo by accident that your opponent can turn right around on you in the next turn. It’s also vital to train your eye to notice 4-of-a-kind matches and higher, as they always yield better results and net you an extra turn. Puzzle Quest doesn’t limit the number of turns you get per game and battles don’t have a time limit, but being able to pull off several turns in a row before your enemy can respond goes a long way toward victory. I can’t count the number of times my opponent kicked off a streak of matches that brought me to my knees and had me cursing the winds of fortune.

You won’t get far without learning how to fight tactically, or without upgrading your weapons and armor. Puzzle Quest has a typical RPG story, but the RPG mechanics are what make the biggest difference to the gameplay. This isn’t Candy Crush or even Bejeweled; it requires that you put effort into leveling your character and keeping your gear and spell list in top shape. This is especially true if you want to get serious about side quests. These usually involve running a particularly obstinate enemy out of a nearby town, and these optional missions offer a lot more challenge than the basic story missions. I often had to fight them on a dry run and lose, and then knowing their spells and tactics, come back with my spells and weapons tailored to whip that specific tree golem or giant spider. You don’t lose any loot of XP for falling in battle, so it’s often a good idea to feel an opponent out first. 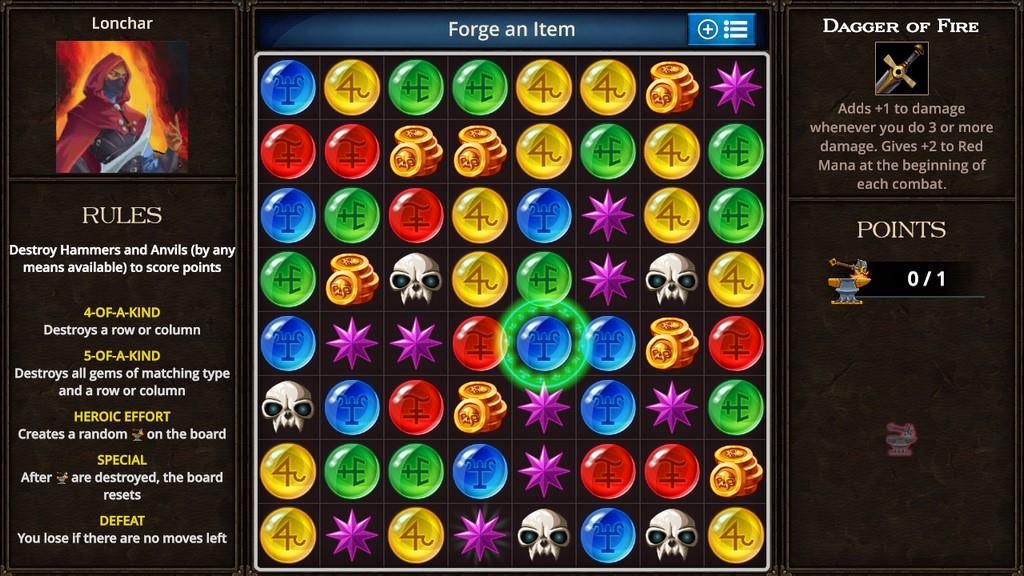 Early going is going to be a bit frustrating as you learn the ins and outs of the battle and upgrade system, but if you can take your knocks and stick with Puzzle Quest, cresting that learning curve offers rewarding gameplay and strategy. Eventually you can conquer enemy cities that will pay you taxes; you can even tame certain enemy beasts and train them up into battle mounts. The RPG layer starts off as a rather staid framing system, but eventually grows into a minimalist of welcome companion to the puzzle gameplay. And if that aspect starts to get on your nerves, you can just load up a single battle skirmish and grind out some XP, irrespective of the story.

Puzzle Quest: The Legend Returns is a pretty standard remaster, and at the end of the day it still is what it is, no more, no less. That being said, over a decade later it’s one of the deepest implementations of match-3 puzzling that I’ve ever seen, and it’s still the perfect portable experience to eat up time when you’re cooling your heels (or maybe even procrastinating). It’s a match-3 puzzle game with a serviceable story and deep, involving gameplay, and it won’t throw an annoying ad or microtransaction in your face every 5 minutes. In this day and age, that’s something of a minor miracle.

Puzzle Quest: The Legend Returns is still the same game but that isn’t a bad thing. Bundling in all the DLC and adding some new classics, this match-3 RPG hybrid is just as addictive today as it was over a decade ago.