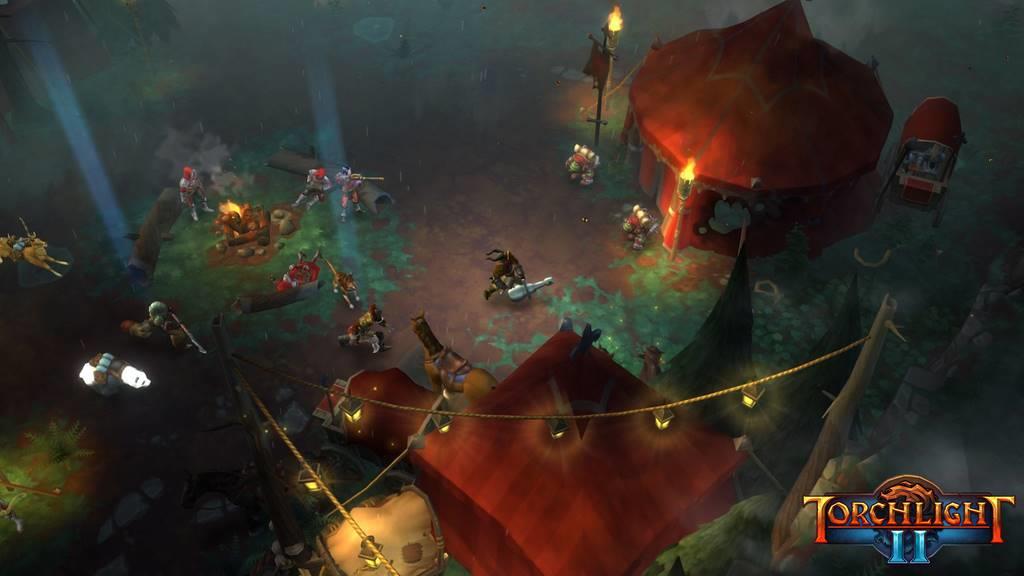 It’s been almost ten years since the release of the original Torchlight on the PC.  I remember a friend recommending it to me as I’m a huge fan of Diablo II and that the two games are very similar.  I picked it up, ran through it, and thoroughly enjoyed it as it did remind me a lot of the Diablo games.  A few years later Torchlight II launched on PC and I pretty much picked it up on day one and enjoyed the heck out of that as well.  Now its several years later and Torchlight II has been released on consoles, so what better time to get back into the game than now.  That said, let’s take a look at the Nintendo Switch version of Torchlight II and see if it still holds up today.  (NOTE: As of the time of this review, some bugs that were present when the game was launched have since been patched.)

Torchlight II begins with players creating their character by choosing one of four classes: Engineer, Outlander, Berserker, or Embermage.  Each class has three different skill trees that they can spend skill points into with multiple skills in each tree.  Most of the skills will have tiers that you’ll unlock once you put a few skill points into it, granting you certain bonuses.  It’s worth noting however that some skills you can only put so many points into before you have to reach a certain skill level to put another one into, so if you really want to rapidly power up an Embermage’s Fire Spear skill, you won’t get very far until you level up quite a bit, so you might want to decide where else to put those skill points.  Thankfully you don’t have to unlock the skills in any particular order as long as you meet any level requirement for what you want to use.  Finally, you can choose a pet which may not seem like a big deal, but your pet will become a valuable asset throughout your adventure.  Also, one of the pets is a Headcrab from Half Life and you really can’t go wrong with a pet Headcrab.

All of your major actions and items can be mapped to any of eight buttons including the four face buttons and all four L and R buttons.  To these buttons you can map any skills, spells, potions, and fish…yes, fish…that you have.  I did notice a bit of a quirk with this, at least when it comes to potions.  Aside from choosing specific potions to bind to the buttons you can also have the game bind the highest or lowest potions of each type.  For instance, if you have a regular health potion and five big health potions, binding a button to the lowest health potion will bind that single regular health potion until it’s used up, then move onto the big health potion.  When I tried this, for some reason it binded my rejuvenation potions instead.  Not sure why as I had regular health potions, plus there are options to bind rejuvenation potions using the lowest and highest criteria.  Because of this I just decided to bind the individual potions. 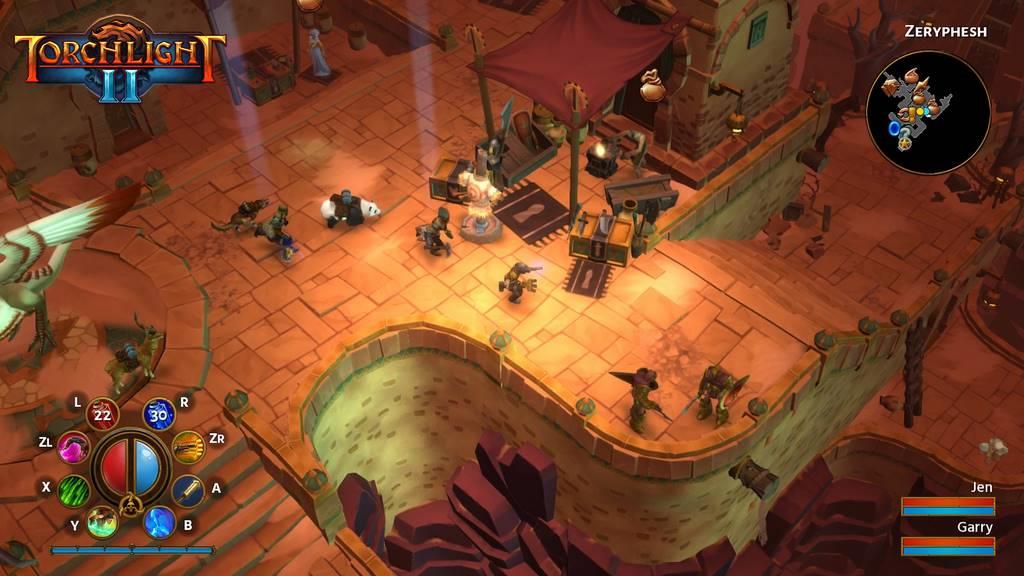 As you progress you’ll encounter many different quest givers whether they’re in town or just standing around somewhere in the open.  A lot of the quests you’re given will take you down into dungeons scattered around the different areas and the maps themselves are randomly generated.  If you’ve played similar games you know the deal: get a quest, go into a dungeon, defeat enemies, collect loot, defeat the “boss” of that dungeon, collect quest item/rescue someone, leave, and go back to the quest giver (in most instances).  This is one of those instances where if you are familiar with this type of game and enjoy it, you’ll enjoy that aspect of Torchlight II as it’s basically more of the same.  If you’re new to this genre, get used to this because this is pretty much Torchlight II in a nutshell.  As you complete quests and defeat enemies you’ll gain experience and level up.  Each level up gives you a skill point and five stat points, the latter of which can be put into Strength, Dexterity, Focus, and Vitality.  These give different bonuses to your stats and certain gear require either a certain experience level or a certain stat score to equip so if you want to use certain gear, make sure to put your stat points where you want them as you can only take back the last three spent while you’re in town.

So remember that pet you chose at the start of the game?  Well it’s more than just something that follows you around.  It can attack, it can hold items, and it can even run back into town to sell the items it’s holding.  Basically, your pet is like a swiss army knife of sorts.  You can give it a couple of different accessories to wear to boost its stats and you can give it your unwanted items and then send it back into town to sell them for you.  There is a catch to that however; your pet will take some time to return and the amount of time seems to depend on how far away from town you are.  Early on this can be near two minutes so if you depend on your pet to help you out a lot in combat, it might be worth it to find a safe spot to stand in before sending your pet away for a few minutes.  You can also have your pet purchase various potions and scrolls while in town, so your pet is a very versatile helper. 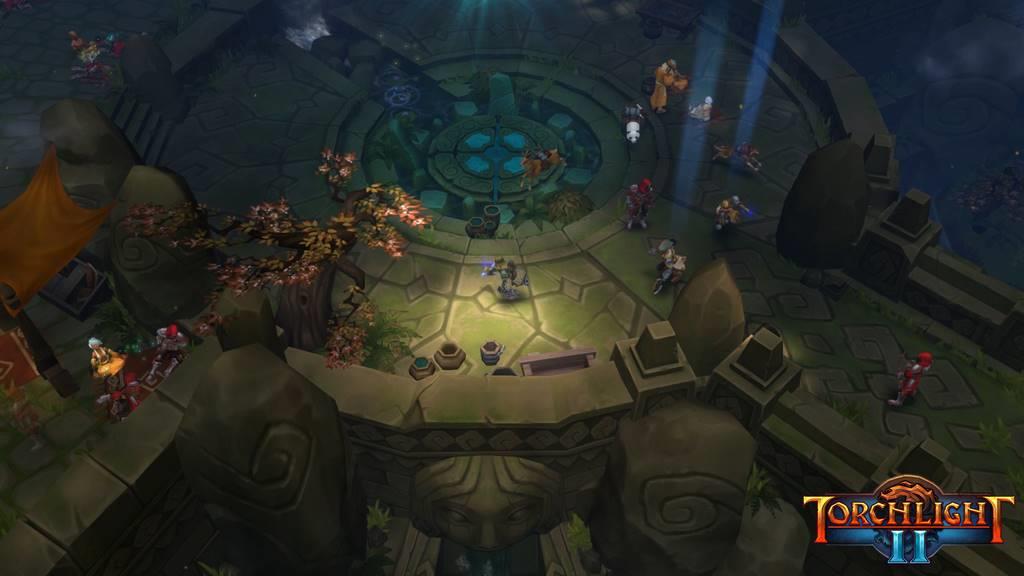 Having never played a Diablo-style game on a console I was a little concerned how easy the transition from mouse and keyboard to console controls would be.  As stated earlier the four face and four shoulder buttons can be mapped to different skills, spells, items, and so on, and for the most part I picked up on the controls pretty easily, but I did notice a couple of interesting quirks.  For one, the A button if your basic pick up item/talk to someone button, but it can also be mapped to a specific function and by default it’s your primary attack button.  If you’re trying to pick up something or talk to someone with an enemy nearby, chances are you’ll keep attacking that enemy instead of doing what you actually want to do.  Another quirk which I’ve noticed with the Embermage’s Shocking Burst skill is that while shooting the lightning from your hands you can rotate the left control stick to spin around and hit nearby enemies…unless you happen to actually hit an enemy in which case the game seems to lock into it and you can’t move again until you stop the attack.  It’s nothing major and I’ve gotten used to it, but it’s still strange how that works.

As with other games of the genre, Torchlight II does have a New Game Plus option once you beat it.  If you’ve played games like Diablo II or the Borderlands series, you’ll have an idea of what to expect.  You’re basically playing the game again except the enemies will be stronger, the loot will be better, and the maps will be regenerated randomly again.  Beyond that it’s more of the same.  In terms of how the game plays outside of controls, the music is pretty good and tends to match the atmosphere of the area you’re in and the graphics seem well done.  Performance-wise I didn’t notice too many issues with the exception of a slight hiccup here and there, but nothing game breaking.  If you’re into dungeon-crawlers, especially the Diablo series, you’ll want to give Torchlight II a try.  For $19.99 it’s a great alternative to Diablo III for about a third of the price…well, the Switch version anyway.

Torchlight II is as fun on the Switch as it was back when it launched on PCs seven years ago.  The controls on the Switch feel pretty good and eased my worries about transitioning from PC to console.  While a lot of the game is basically fighting enemies, collecting loot, and repeat, if you’re into games like the Diablo series you should enjoy Torchlight II, and at a third of the price of Diablo III (at least on the Switch), Torchlight II is a great alternative.