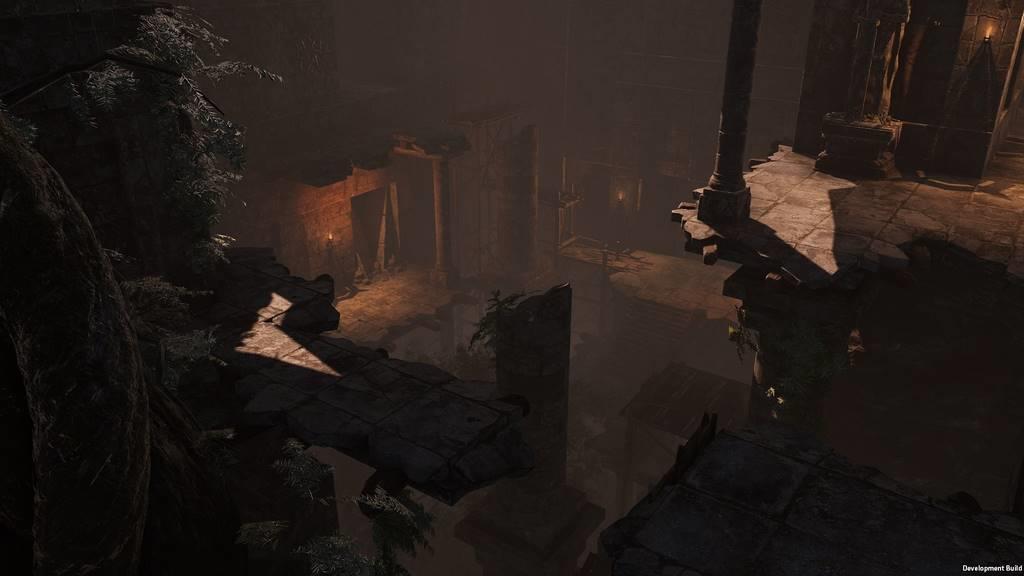 Solasta: Crown of the Magister

Written by Russell Archey on 8/8/2019 for PC
More On: Solasta: Crown of the Magister

If you’ve ever been to GenCon you might wonder how video games fits into “the best four days in gaming".  Sure there are a couple of rooms where you can play video and arcade games, but when you think GenCon I’m sure Dungeons and Dragons would come to mind before plumbers and koopas.  However, there is still a digital presence at GenCon every year whether it’s a publisher turning their own IP into a digital format, or someone creating a new game from an existing rule set.  Bad segue aside I got the opportunity to check out a developer build of Solasta: Crown of the Magister on Steam.

My time with Solasta: Crown of the Magister was accompanied by Mathieu Girard, the CEO of Tactical Adventures, and Graeme Davis, whose roles include IP Creation and Development, Narrative and Story Design, Game Writing, and Historical Research just to name a few.  They were on hand to fill me in on various aspects of what I was playing and answered any questions I had.  I started the demo with four characters who were asked to help find someone and right off I got a taste of what the game had to offer by simply responding to what someone said.  To help me in my quest my group was offered some food as the quest would take some time (in story).  Three of the four party members had responses that ranged from taking the food to not taking it for one reason or another.  While this decision wasn’t too influential in the long run, Mathieu and Graeme explained that in the final build certain responses in various situations could have an effect on your standings with various groups and factions.  Another point I got clarified was even though the four characters I started were “pre-gens” (characters already created), I was informed that players can choose from the pre-gens or creating their own characters.

After agreeing to help the two NPCs I ventured into an underground temple and this is where the bulk of the play session began.  Your party (singularly or as a group) moves around on a grid and you can click on what square you wish to move to.  This is pretty standard in games like this, but that’s only part of it.  Using the mouse and the right mouse button you can rotate the camera around to get a real feel for just how big the temple is, both on a horizontal plane as well as a vertical one.  Throughout my time with the demo I was not only crossing bridges and pillars I pushed over, but climbing up and down ledges, jumping over gaps, and exploring the temple on multiple levels.  You can also enable a Caution mode which makes you move more slowly to help avoid enemy detection, as well as highlight traps that you can disable.  Clicking on a trap before moving over it will disable it but moving over a trap will activate it and you will face the consequences. 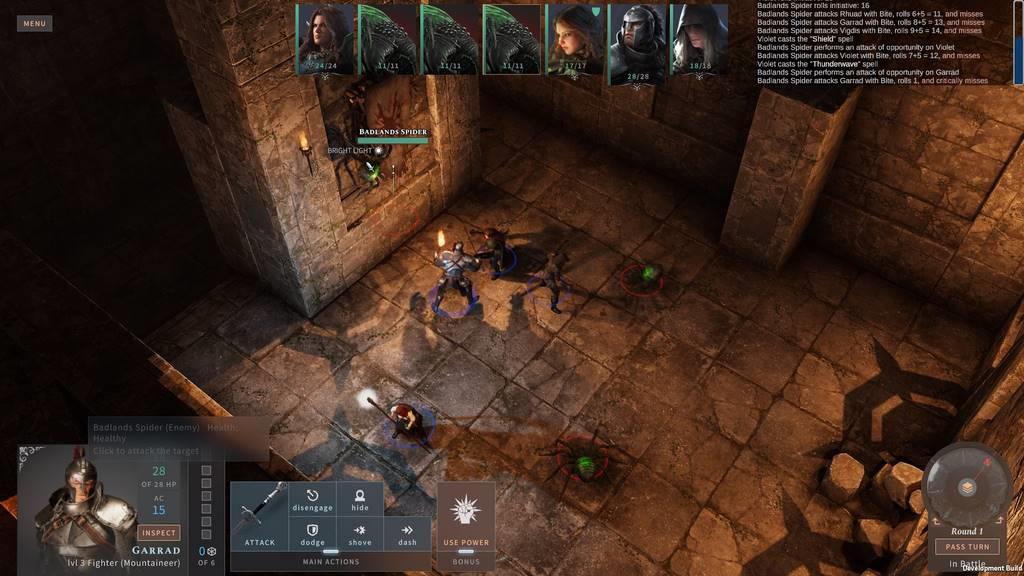 I also got a taste of the combat not once, but twice.  The first time was a simple battle against three spiders that came down the walls to attack me.  This was in a small room so it was pretty basic, but a good introduction to the battle mechanics.  If you’ve played Dungeons and Dragons 5th Edition you’ll know how combat works.  If not, each player will roll for Initiative and the enemies will roll as a group (so whenever a certain enemy type comes up in the Initiative order, each of that enemy type will attack one after the other before the next turn in the Initiative order).  When a party member’s turn comes up they can move a certain distance (typically up to 30 ft.), attack, cast a spell if they’re a spellcaster, or take a few other types of actions.  Characters can also have an advantage or disadvantage over the enemy depending on their positioning and the positioning of the enemy.  The first combat with the spiders didn’t give me an opportunity to experience that, but the second encounter against several orcs did.  My party all started the battle up on a ledge and the orcs couldn’t hit us.  However, that also kind of meant I couldn’t hit them with standard melee attacks so I had to jump down eventually and take them out…and got one of my characters almost killed in the process.

The demo ended after the second battle (the downed character survived) and I thoroughly enjoyed it, though there were a couple of qualms I had with it.  As much as I loved how they utilized the vertical space in the temple it does come with a caveat.  There were times where I was trying to click on particular squares to move forward and instead the game would think I was pointing to a square on a ledge above me and if I had clicked it, my party would have started moving back up to that ledge.  That could also mean if you mis-click a square above and below you and your party starts going to that square, you might accidentally move over a trap and trigger it which actually happened to me.  It’s not hard to get used to but it did take me some time to do so.  The other qualm is actually during combat.  While you can rotate the camera 360 degrees and use the mouse wheel to zoom in and out a bit, you can’t move the camera up and down and you’re kind of locked into the same isometric vertical view.  This can make it hard to see where certain enemies are in combat.  Thankfully you can click on the portrait of an enemy or ally to use an action on them, but even being able to move the camera up and down a bit would have helped a bit.  This could also help players see where they’re moving around to and if they’re gong to end up next to someone or something. 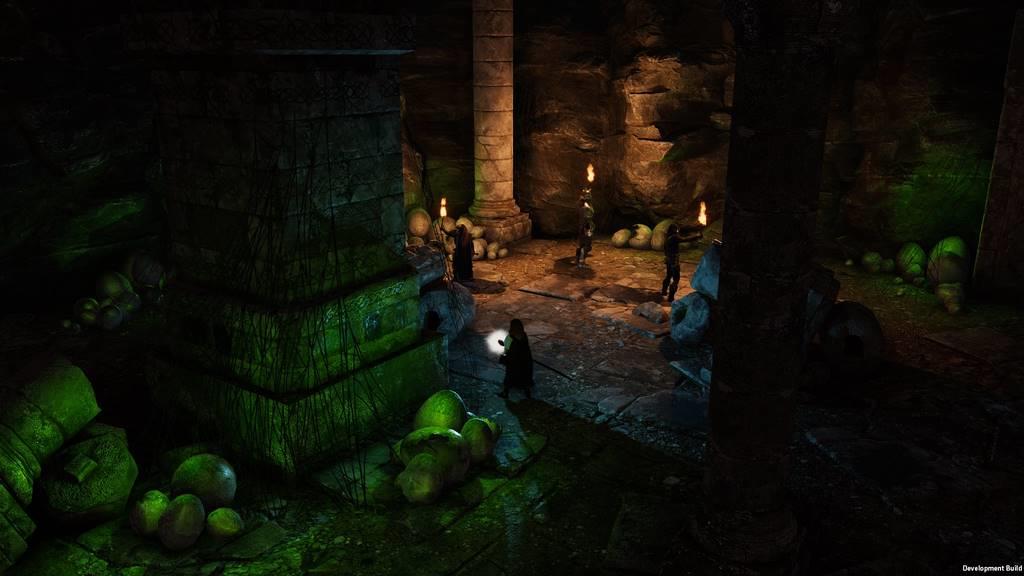 Overall though, I enjoyed my time with Solasta: Crown of the Magister.  I tell my friends that I wish I had more time to play Dungeons and Dragons but between the work schedules of myself and my friends, getting time to play is a rarity.  Something like Solasta is nice in that I can scratch my D&D itch in a way that prior games haven’t explored that much.  Mathieu and Graeme did a great job answering any questions about the game that came to mind as I played and they informed me that the game would be hitting Kickstarter in the coming weeks.  While I didn’t inquire about how much the game would cost during the Kickstarter campaign (which I’m honestly not even sure they’d be able to tell me), I’ll definitely be keeping an eye out for it and hopefully down the line I’ll be able to check out the full game.  If you’re a fan of D&D 5th Edition, this is one that you might also want to keep an eye out for.