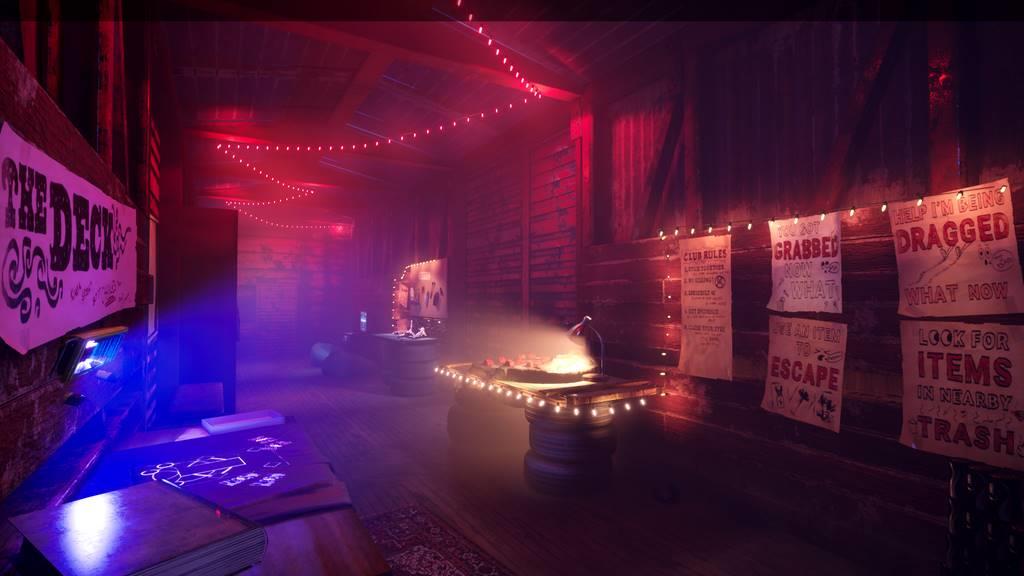 The Blackout Club, the latest title from development studio Question, is a multiplayer-focused horror title in which teams of four accomplish various objectives across a residential neighborhood which gets real haunted late at night.

Outside of an effective single-player tutorial, the game is entirely online. The tutorial, like all tutorials, serves as an introduction to the game, its mechanics, and the world. Players can either host or join games with up to three others. I always chose to join, as I don’t have the patience to wait out for people to join my game since my ping has a tendency to bounce around. Plus, it would really stink if I tried to fight the enemies in this game on my own, as they have a tendency to pop up out of nowhere, and if you don’t have equipment to knock them away, they’ll bring you down.

The game’s setting is the neighborhood of Hoadly, a sprawling subdivision full of the typical houses one would see there, except there’s something fishy going on. You see, Hoadly changes at night, and in classic fashion, the kids notice it, while the adults pretend nothing is happening, echoing films like Nightmare On Elm Street or It Follows. Except where those pieces actually had a story a viewer could follow with a clear throughline, The Blackout Club, on the other hand, feeds players the story through bits and pieces. Starting with the tutorial, the player learns the ropes of hiding in closets, maneuvering around lumbering enemies, how to use various gadgets and items, and navigating the game world.

This part introduces players to The Shape, the game’s mysterious, invisible protagonist who can only be seen when the player closes their eyes (on PS4, this is done by pressing triangle). The mystery, monsters, and parents are all tied to a mysterious facility beneath the town, which the tutorial dives into a small bit.

This is where the game’s titular organization comes in. The Blackout Club is a group whose aim is to find out what’s happening and save the town of Hoadly.

The player joins the club at the end of the tutorial, and that’s where the real game begins. 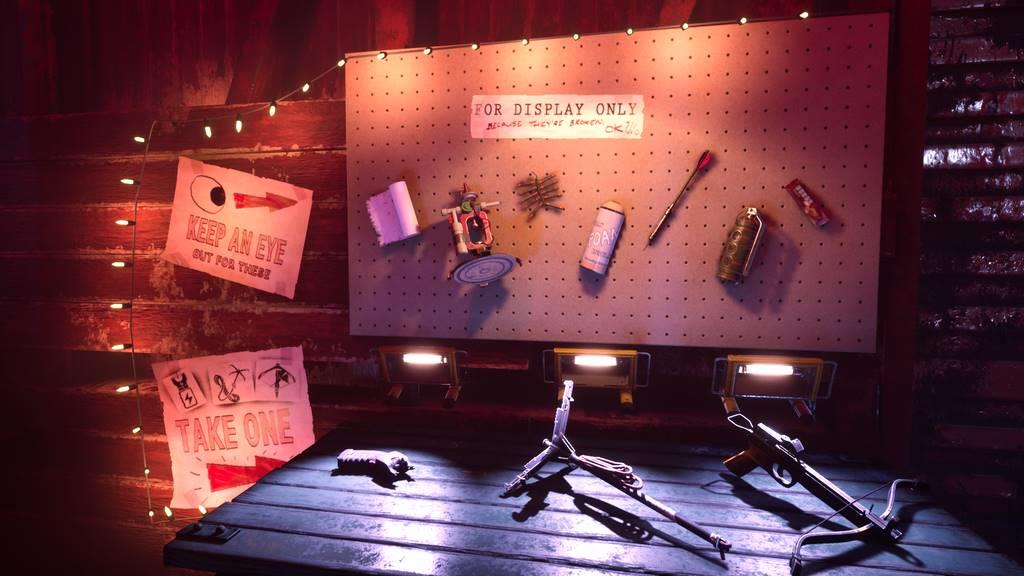 The game’s world lays out the narrative and the action. Dropping in at specific spots on the map, the player team’s task is nearly always the same: recover evidence through recording certain events in town, and make it to an exit point before they are all eliminated by the Shape or other enemies.

Speaking of enemies, there’s a few different types to be aware of. There’s the Shape, of course, but there are also the adults themselves. These constitute the majority of the enemies onscreen during matches. They can’t see, but they can hear, so of course this necessitates players quiet down when they traversing the map. In addition to those are Lucids, who can see in the light, but not hear (I am a little iffy on that, as talking with teammates online they did tell me that they could actually hear, but I think it’s the former). There are also Stalkers, although I’ve had limited engagement with this particular enemy type.

The combination of all these enemies and their advantages or disadvantages makes for an interesting and challenging way to traverse the maps. The Shape will come seemingly at random, highlighting a single player and then hounding them until either the Shape takes them or the player can somehow escape. Meanwhile, if the player is trying to be quiet, they can crouch and walk past a deaf enemy, which will negate any sound. But let’s say the player has to walk past a lamppost, and there’s a guy with a mask and robe on creeping around there. Well, let’s just say that that would be a good time to run. Except then you would alert the deaf enemies, and then that therefore raises there alert level, and also deplete your stamina, and also the Lucid enemies are probably alert now too. This brings a more complex method of gameplay to the fore, making players maneuver around tough situations that can potentially end a playthrough. 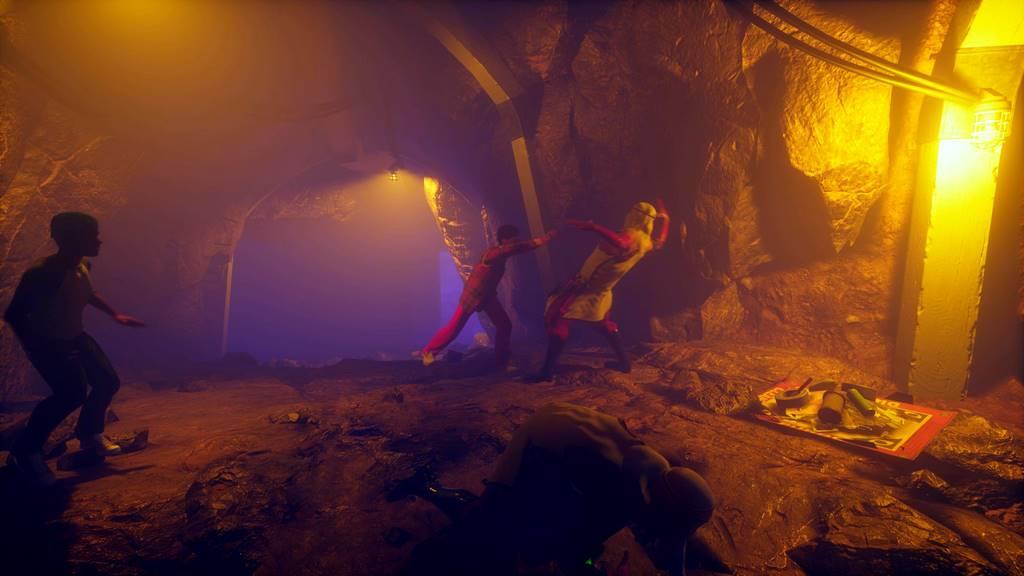 Luckily, though, there are a number of tools at the player’s disposal. From a combination zipline grappling hook, to a stun gun and dart gun, as well as major and minor powers that gain players both active and passive advantages. With the grappling hook, players can aim it at any surface above them, shoot, and, provided it sticks, can climb out of trouble. The dart gun packs tranquilizer darts that players can find all over the map, and provide great ways of incapacitating enemies around the map. The stun gun does what stun guns do best: zapping and knocking your enemies out. The major and minor power I took the most advantage of were the ability to knock down an enemy with a push of a button and to have an extra bandage when in-game. It’s easy to hurt yourself when you’re trying to get away from enemies who, even though they can’t see, will nimbly amble themselves onto the roof that you escape to.

Speaking of ambling, that describes the game’s pace to a tee. With every match, players are tasked with a random set of objectives. Capture however many pieces of “evidence” by filming blood splotches or parents wandering around at night; collect a set amount of posters and plaster them all over the neighborhood. As the team completes objectives, more and more pile on. It’s never feels like too much and it all feels accomplishable, and thankfully there are always opportunities for bonus objectives. Perhaps the best thing about this is the length of exploration that gets done around the map. The surface of the neighborhood is like any other, but there’s another layer that players can explore that’s makes it all unique. This is, of course, the underground facility that lies underneath. Both the neighborhood and facility expand with region of the map players unlock, but it’s that dual nature that makes the game so unique.

I feel like that’s about where it ends, though. As fun and tense as the game can be, with enemies sneaking up on you in absolute silence, or the frantic maneuvering when the Shape tries to get you, or the world to explore. But beyond that, it’s just the same thing over and over again. Go through the motions of trying not to get caught and complete the same objectives you did in the previous match. The thing I found the most useful is the different players I got to interact with. Sure it wasn’t for long, but it offered a lot more organic gameplay than the rote gameplay the developers came up with.

The Blackout Club is ambitious, but it doesn't have enough variety to make me care for that ambition. Thankfully, there are ways that players can make the game better on their own, filling in what the game lacks, but the game needs to back it up a little more.