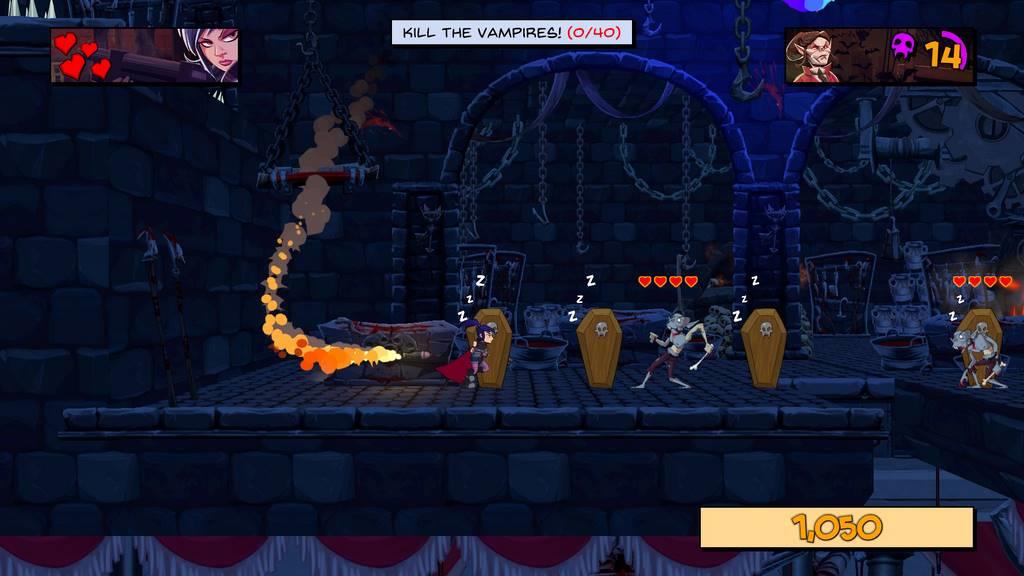 It’s happened to a lot of us: a new beverage comes out, it's mass marketed, everyone loves it and the next thing you know it’s the biggest thing since sliced bread.  This has also happened in TV shows and video games, though in those cases there’s usually some sort of side effect or some bizarre reason everyone loves it so much.  Maybe the drink is needed to keep people in check for one reason or another.  That just happens to be the case with Damsel, though there’s a bit more to it than that, so let’s dive into Damsel on the Nintendo Switch and see what exactly is going on.

Damsel takes place in a world where humans and vampires co-exist via kind of a loose alliance.  A popular drink called Red Mist quenches the vampires' thirst for blood, but when humans start to vanish on a regular basis, the Red Mist corporation is at the top of the list of suspects.  The Department of Sanguinarian Affairs sends out their best operative, named Damsel, to find out what’s causing the humans to disappear and if the Red Mist corporation is really behind it.  That’s basically all you get for a story at the start but when you play through Story Mode the story continues between stages via cutscenes that are styled after a comic book.  Kind of reminds me a bit of Comix Zone on the Sega Genesis though the stages don’t have you traversing through comic book panels.

Damsel has a couple of game modes to play including Story, Arcade, and Damsel Dash.  As stated Story Mode is where you’ll see the story unfold more as you progress.  In fact the comic book motif is taken a step further as there are three “issues" to play through and each issue has twenty-five stages.  Naturally you cant play a “future issue" without completing the previous issue first.  Each stage has multiple tasks you can do such as collect purple skulls, destroy coffins, rescue hostages, and so on, but you do have a set goal to complete to move on.  What this means is that sometimes you’ll have to make the decision whether to finish a few tasks to try and beat your best time, or just finish the main goal as fast as possible to obtain a faster time.  If you're connected online your times and scores will be uploaded to the online leaderboards so you can see how you stack up against the rest of the world. 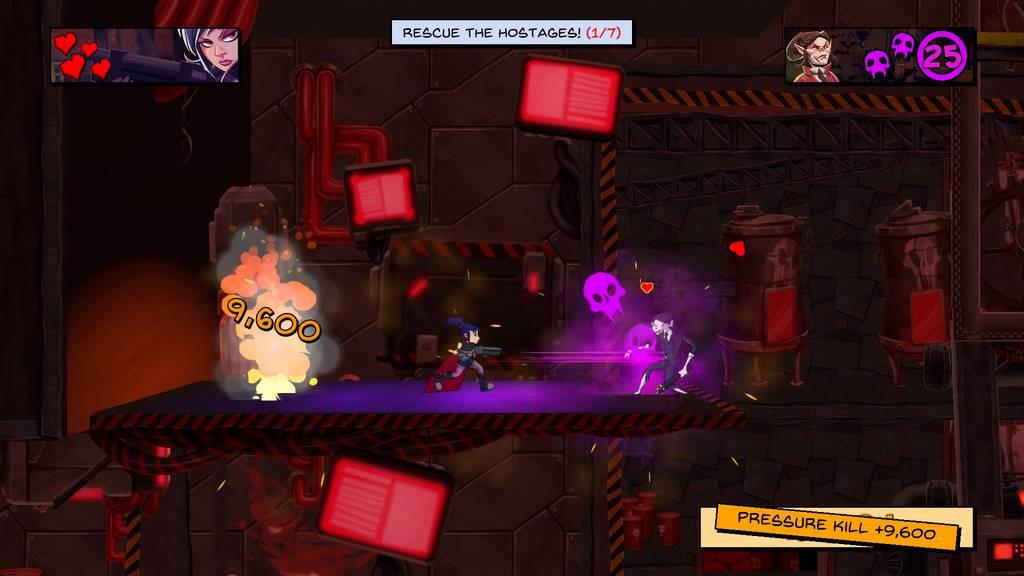 Damsel has a few tricks up her sleeves to combat the vampires roaming around.  For starters she has a pistol that she can use to defeat the vampires, but she can also point it at the ground, fire, and bounce up in the air.  This means you can basically pogo around using your pistol as long as you keep firing and even gain altitude if you fire fast enough.  If you’re close enough to an enemy or destructible item you can take it out with a melee attack.  Damsel can also perform a dash to dodge enemies, though the dash does have a small cooldown timer.  You’ll have to master all of these techniques in the early stages because even early on things can get rather crowded and hectic in a hurry.  Between the zombies roaming around, hostages tied up, and various objects such as exploding barrels just lying around, it can be very easy to accidentally shoot something and cause a hostage, or yourself for that matter, to die and cause you to restart the stage.  Thankfully in Story Mode there’s really no penalty for that.

The next game mode is Arcade Mode and it contains the same stages, but there are some key differences.  First off is that no matter how much you have unlocked on a Story Mode profile (which is selected after choosing Story Mode), you can run through any of the three issues and you’ll run through each stage in that issue in order.  The primary goal (at least for as long as I played) is always to collect all of the purple skulls.  Unlike in Story Mode you only have three lives to complete a stage, though you do get refreshed to three lives after each stage.  Beyond that the core gameplay remains the same; it’s just that instead of going for a high score or best time, you’re just clearing each stage one after the other with no story elements.  The last game mode is Damsel Dash which basically seems like playing the stages in a random order with the same three life limit of the Arcade Mode.  However, it seems like the stage order isn’t really that random as every time I tried it (and I was really bad at this mode) I’d get the same few stages in the same order.  Beyond that it’s basically trying to get an overall high score for the mode. 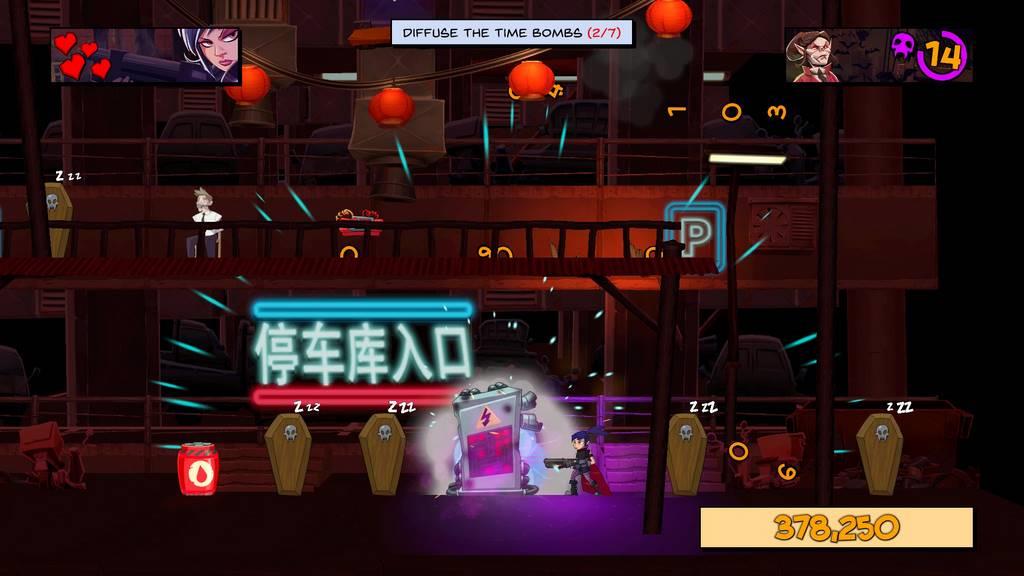 Damsel controls and plays pretty well and I didn’t notice too many performance issues outside of a couple of minor ones here and there, but there was one thing that stuck out to me and became kind of a hinderance when I played.  As stated Damsel has a comic-style motif going for it and…well, some comics can have a dark and gritty theme to it.  I’m not saying the story is like that, but the stages can have a darkened tone to them which can make it hard to see where you’re going sometimes.  Often times I’d be running on a platform only to drop down through it, but it was actually a gap in the platform that I couldn’t tell was there.  Likewise there are times where I’m trying to quickly jump up on a platform but the platform extends a bit further than I initially thought.  For the record I played most of this in handheld mode so if you’re using the dock your mileage may vary as you have a lot more control over the brightness and contrast settings on your TV than you do with the Switch.

When I got the chance to review Damsel I jumped at it because it looked like my type of game: a platformer with elements of speedrunning as you attempt to ascend the leaderboards.  Aside from the “ascend the leaderboards” aspect (I never said I was good at speedrunning) I enjoyed Damsel, though kind of felt it was just a bit lacking.  Aside from the dark tone the stages take in terms of being able to see what you’re doing at times, Damsel Dash almost feels like it’s kind of not needed.  I understand what they were going for but it basically just feels like a mash of Story Mode’s objectives with the lives aspect of Arcade Mode and just putting the stages in a random order.  Honestly this game feels like it was made to have a level editor.  Imagine being able to create your own stages for Damsel to run through or to upload them online.  Granted after playing Super Mario Maker and reviewing Million to One Hero I’m kind of on a stage-creating kick, but I digress.  Anyway, if you’re a fan of platformers that basically want you to multitask while finishing a particular goal as fast as possible, Damsel has you covered.

Damsel is a fun arcade-style platformer/shooter/speedrunner/whatever genre you want to call it.  The comic-style motif is a nice concept that I haven’t seen for a long time and the gameplay is pretty fluid.  The darkness of the stages and the similarities between the three game modes kind of bring the game down a little, but it’s still an enjoyable outing for the Nintendo Switch.