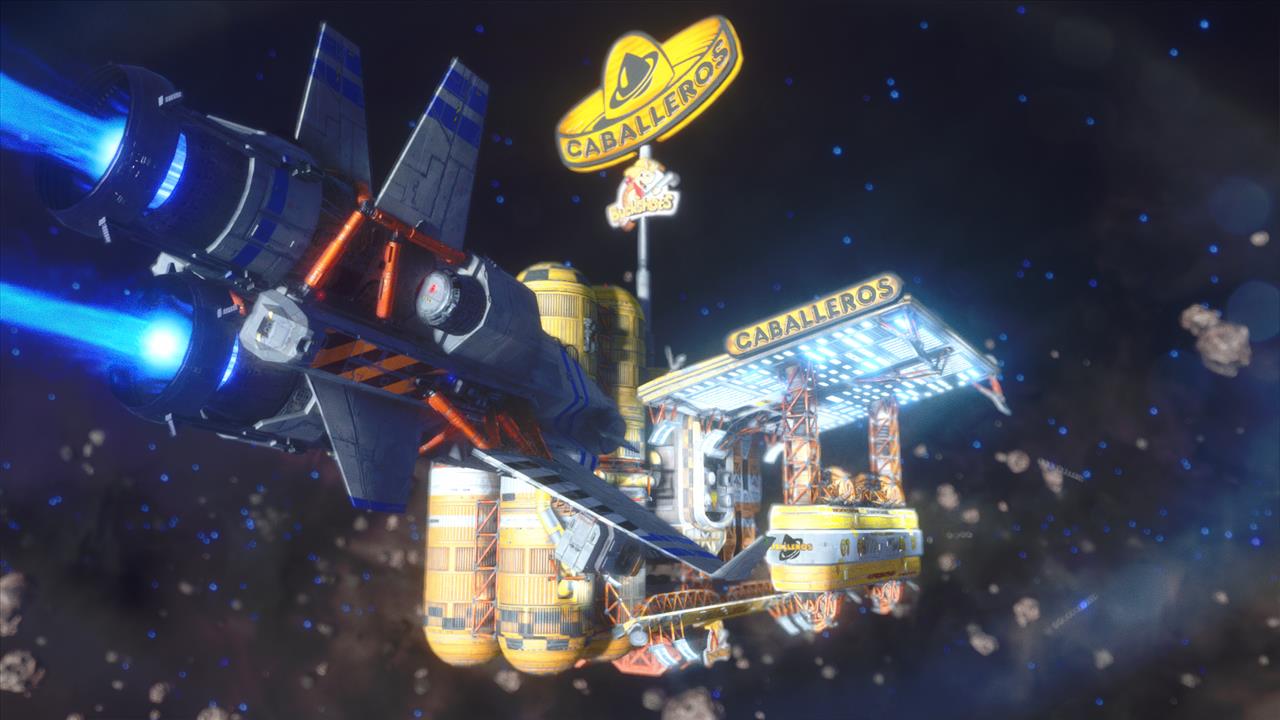 Rebel Galaxy came out a few years ago to a bit of fanfare and was largely well received amongst the space combat fans out there.  Space combat games are rare and good ones are even rarer which is why folks were happy to see a sequel being developed by Double Damage games.

The biggest difference between Rebel Galaxy and Rebel Galaxy Outlaw is that there’s now 360 degrees of spherical freedom. Before, all flying took place on a flat plane, more like it was battleships on the water rather than spaceships in space. You did fly immense battleships, firing broadsides at equally immense enemies. To a degree, it worked. But people wanted to fly up and down on a Y-axis, too. Not just do donuts on an X-axis outer space parking lot.

Rebel Galaxy Outlaw isn’t here to waste your time. There are trade lanes to autopilot, ships to envy, equipment to jack, and thugs to murk. And it moves things right along. There are slot machines, pool tables, poker dice, and arcade games to play. And it doesn’t mind letting you practically button mash your way through those minigames either. There are skip buttons everywhere. In the case of playing 8-ball, there’s a fast-forward button to keep the balls rolling at a brisk pace. Even if it means watching me scratch the 8-ball at 1.5x speed.

In one sense, Outlaw is the antithesis of what I usually look for in a space sim. To tell you the truth, I couldn’t be happier that it gets me out of my comfort zone. As it turns out, moving around outer space at an actually decent clip is rather fun. Launch ship. Ping objective. Autopilot out. Target, target, target, boom, boom, boom. Bounty collected. Loot gathered. Return to base. Landing permission granted. Auto-refill jump fuel. Sell off commodities. Repair. Rearm. Re-up your mission list. And then slow down, have a seat, and chat with the bartender for a few tips for a freelancer that’s been out of the game for a few years.

Then get back out there in the black. Marvel for a moment at the dusty twister-looking clouds of gas nebulae. Take in the view of that enormous blue jewel of a planet. Take in the sights of a lonely outpost swirling with space debris and perched on the edge of an asteroid field. Enjoy the view. But then get back out there. You’re Juno Markev. You’ve got a score to settle. 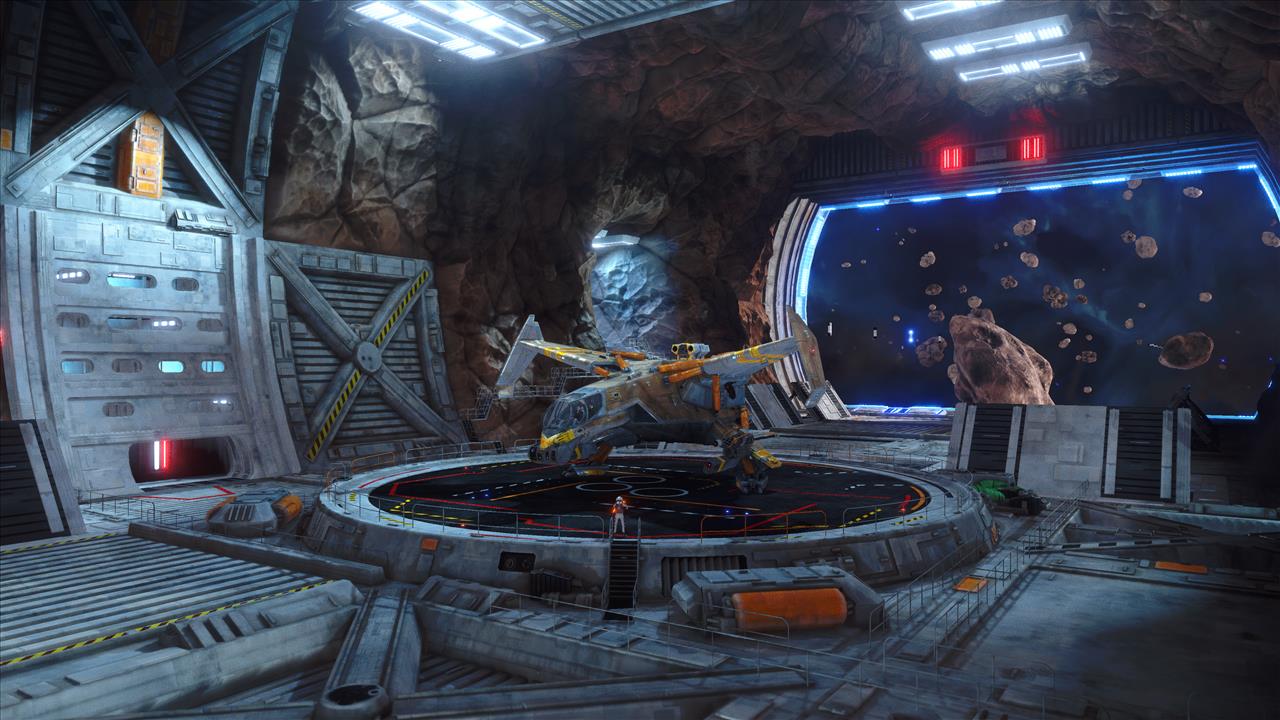 You already lost your ship, a top-of-the-line Coyote fighter. It was a beauty, too. Topside like an X-wing. Nose like the whisky barrel on a Saint Bernard. Back end stacked up like a double-decker bus but all jet engine. That ship is gone. Now you’re starting back over in a trash hauler. Yellow and green like it gathers the garbage from the Oregon Ducks football stadium. Your new, terrible ship isn’t a looker. But you’ll grow fond of it, too. You’ll make your first 10,000 credits in that ship. Then you’ll make your first 100,000. Before you know it, you’ll be visiting the car salesman of a ship dealer, rolling a beefy Sonoma off the lot, then realizing you have to learn a whole new dashboard. You’ll look for the radar where it used to be and find your enemy’s schematics. Then you’ll look for your enemy’s schematics and find your radar. They keep you in that first trash barge a little too long. But you’ll miss it when it’s gone.

There’s a garage blues radio station to get you through those times. Or classical. Or salsa. The soundtrack is as brave as any Grand Theft Auto mixtape. Traveling outer space's dark country roads with rebel-yell lyrics blaring throughout your dump truck of spaceship is a good time.

The enemy is no Kilrathi (those were the lion-headed enemies in Wing Commander). And while the bad guys aren’t as distinctive, they increasingly level up their flying skills along with you. I’ve watched enemies juke left and right, nearly breaking my wrists trying to keep up with their zigzagging. I’ve seen them go into barrel rolls that leave my auto-aim completely stumped. They’ve outrun my image-recognition missiles, torn down my front and aft shields in a single pass, and even gone kamikaze right at my face when they were going to turn the battle in their favor by doing so. The laser light show gets out of control once you hit higher tier ships. But you’ll be hugging that left trigger on the gamepad for all your worth. 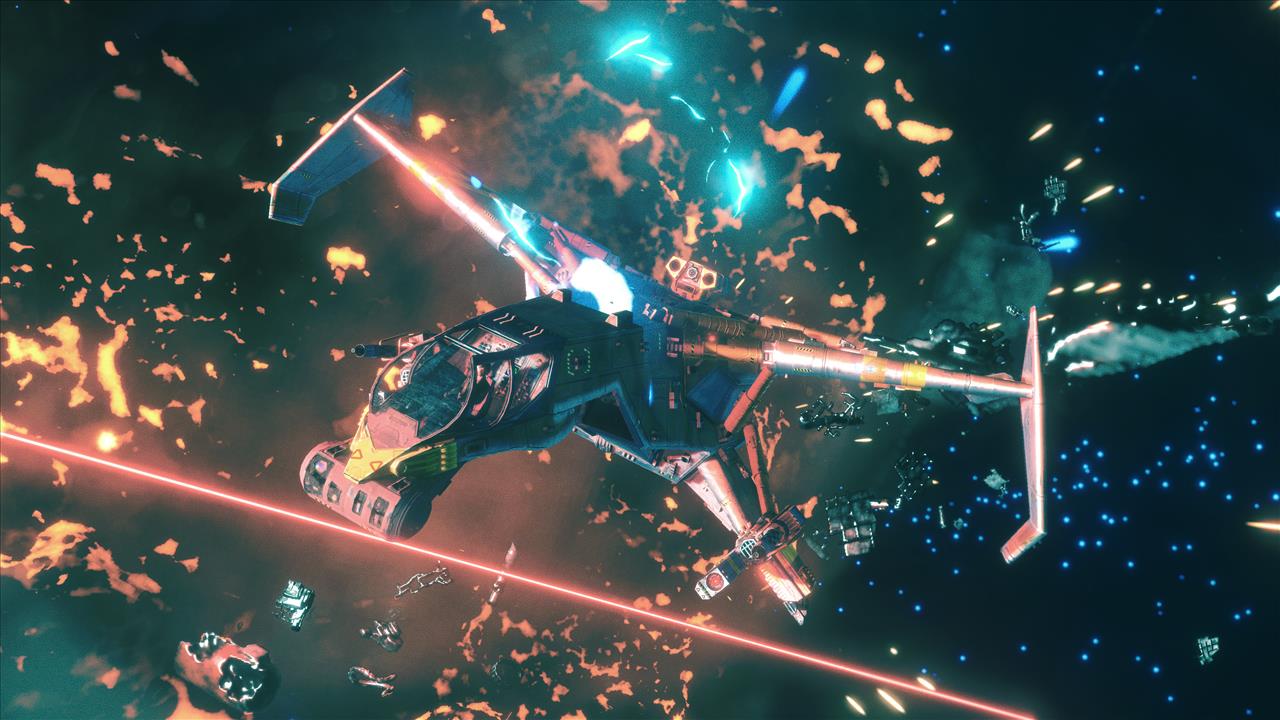 Much of Outlaw’s combat is tied to that left trigger. It’s Double Damage’s answer to the sometimes bewildering effect of dogfighting in 3D space. Close-quarters combat in spaceships can often mean you’re staring at the little red dot on your radar, trying to pull around tight enough to light up your enemy. Outlaw doesn’t want that. It doesn’t want you staring at your radar. It wants you staring out of the cockpit. The battle is out there, not on your dashboard. So, targeting an enemy and then holding that left trigger acts like an auto-aim feature. It basically takes control of your ship and brings you around in the right direction so you can bring your weapons to bear on the enemy.

I like it. I like it so much that I have a hard time releasing the left trigger when it’s time to lock another enemy. I sometimes forget to let go while tracking an enemy and end up slamming into the side of a jumpgate, or an asteroid, or some space debris, all because the auto-aim (and auto-follow, essentially) was keeping my nose toward the enemy, even if that enemy was on the other side of a very big, very damaging obstacle. There are harder difficulties to choose from, if you feel like that’s too much hand holding. But trust me. Trust the developers. You want that left trigger. It’s just one more thing that keeps everything moving along at a decent clip, rather than getting lasered to death while spinning in circles in space, looking to get a visual on the bad guys. 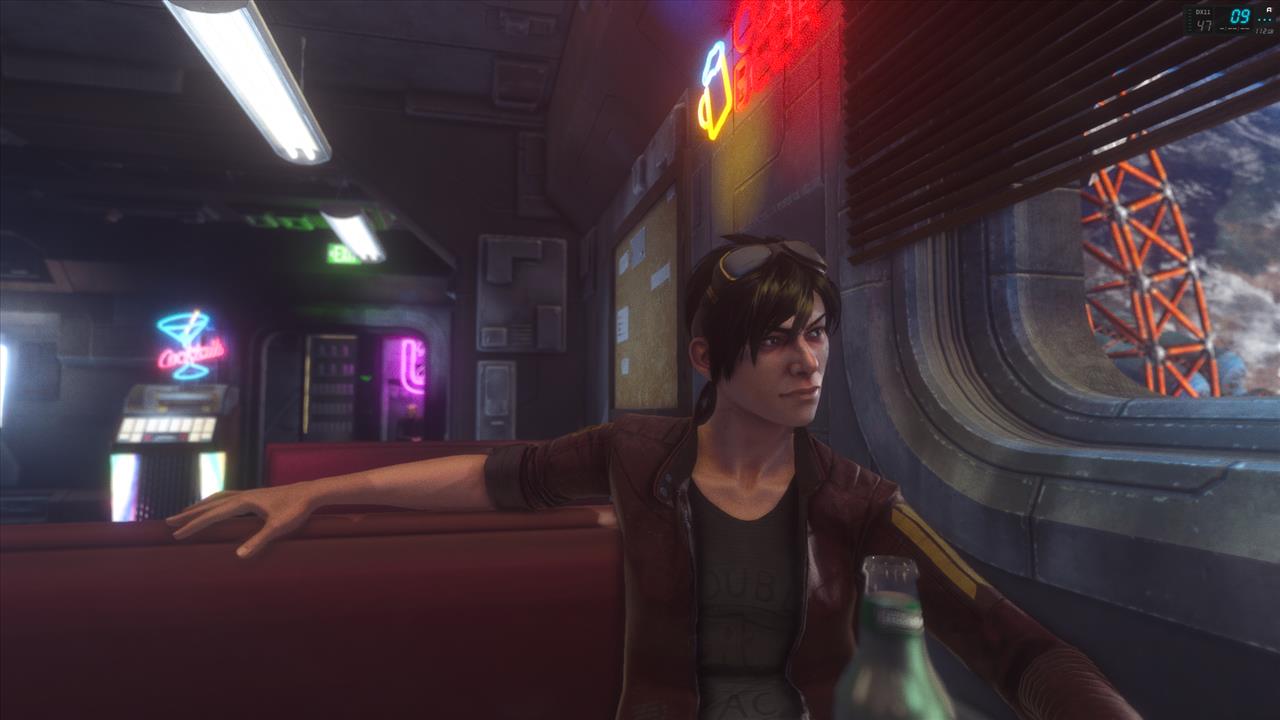 There’s a ‘90s naivete to the ship design, as well as the space station design. They belong on a higher-budget Mystery Science Theater 3000 set. There’s a lot to like about Rebel Galaxy Outlaw. But just the fact that you can pick it out of a police lineup of every other space sim out there is astounding. Good work, art department. There will never be a Firefly game that looks this good, but I have no shame in pretending you’re my Firefly game.

A lot of Big Huge Space Sims drown you in awe and wonder. Which is entirely appropriate. Space is big. And huge. It’s full of awe and wonder. But Rebel Galaxy Outlaw manages to do the opposite. It doesn’t shoot you out into that big huge space. It brings that big huge space to you. It brings you the stars. It brings you the planets and moons. It brings everything to you in your cockpit--and still has the decency to let you get out and stretch your legs for a round of pool. 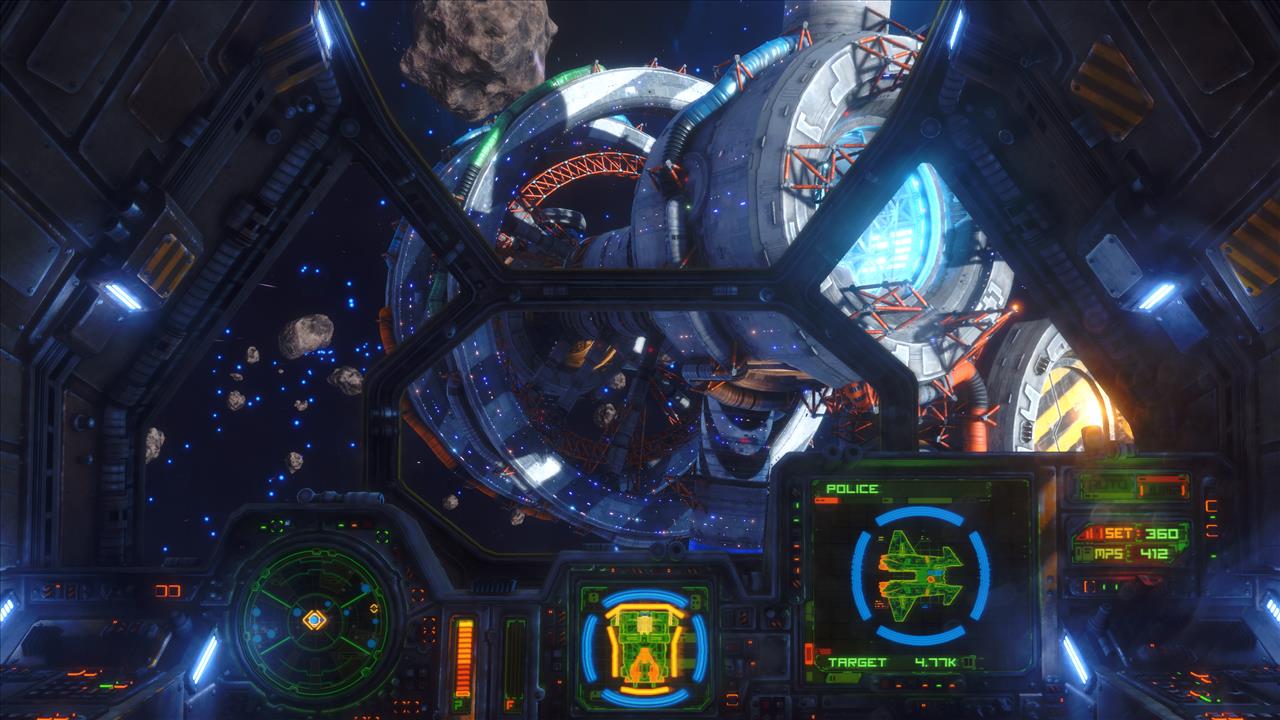 Outlaw is also confident enough to include quaint details like the different postcards you can tape to your dashboard, or the ship blueprints on the walls of the Mercenaries Guild that look exactly like the blueprints from the original Wing Commander. So pretty. And then there’s Hobbes Station, named after a big, lion-y ally in Wing Commander 3. Outlaw isn’t some set of veiled references to Wing Commander. It’s a love letter. The kind you wrote in high school and then folded up into an origami triangle and passed off to that cutie in third period.

I can’t say enough good things about Rebel Galaxy Outlaw. It’s a sucker punch aimed at all the bloated, morbidly obese space sims out on the market today. Yes, there’s room for them, too. But Outlaw distills the ‘90s space-combat and trading sim into a great-looking, great-playing game for a new generation.

Rebel Galaxy Outlaw is the Wing Commander that Chris Roberts can no longer make. And it's made with the love and respect due the legendary series.