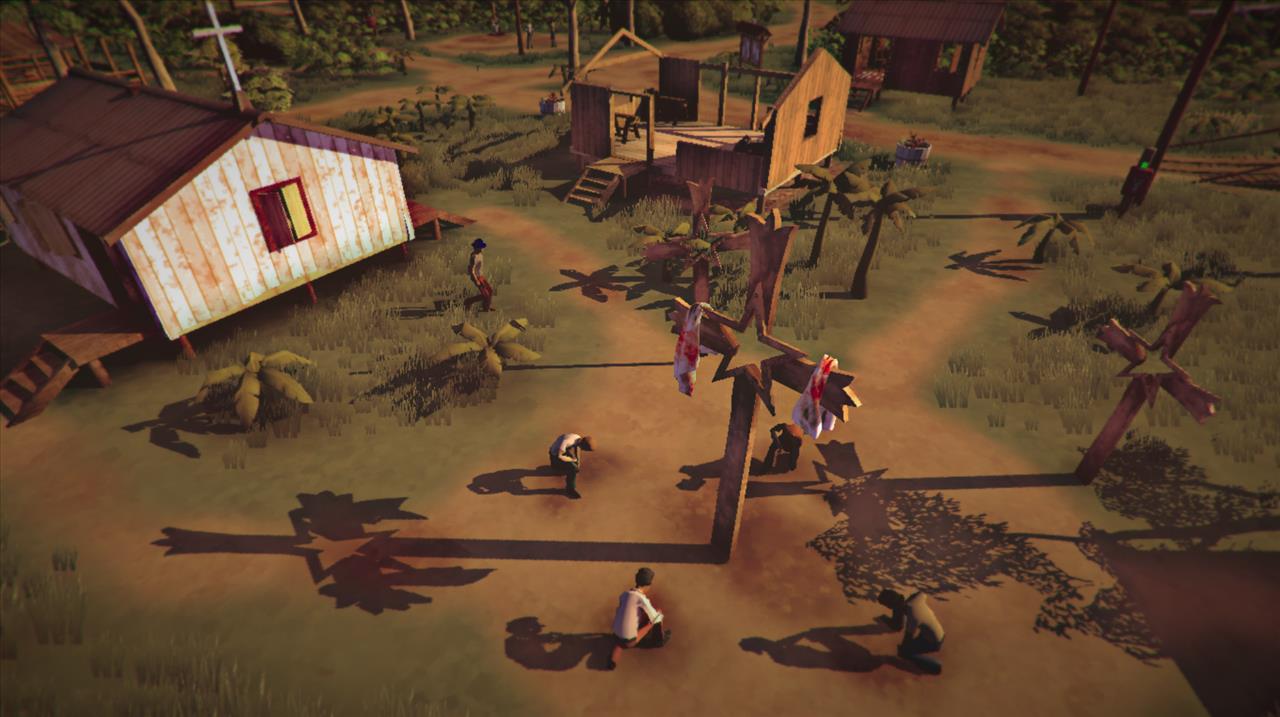 The Church in the Darkness

Written by Randy Kalista on 9/3/2019 for PS4
More On: The Church in the Darkness

Isaac and Rebecca Walker started a church on one side of the United States, then moved it to the other side of the country. Via real or imagined persecution, the Walkers abandoned the U.S. altogether for the jungles of South America.

You’re Vic. That’s either short for Victor or Victoria, since you can select to be male or female. Vic or Victor(ia) is also emblematic of who you can be in this game. Victorious or, as law enforcement refers to a “vic,” a victim. I may be reaching. But maybe not. The writing throughout The Church in the Darkness is deliberate every step of the way. Sure, it’s hamfisted and hard to listen to. But the Walkers, spending more time on the PA system’s microphone than on anything else, have given up on subtlety and nuance. They don’t have the time or patience to be misunderstood anymore. There was enough of that back in the U.S., and they’ll tell you about it. 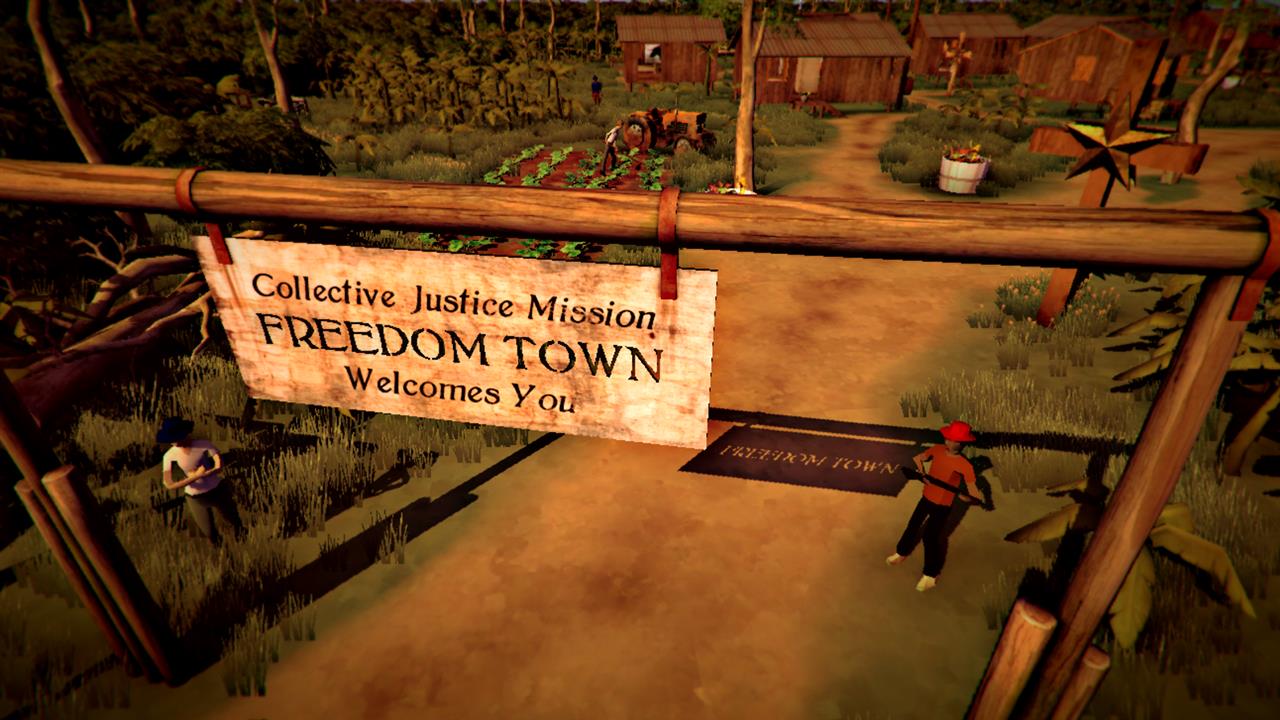 As Vic, you’ll be sneaking around the church’s sizeable grounds. You were sent here to find your nephew. He’s been in this South American church for two years now. But his family back in the States hasn’t heard from him for the past six months. That was too long. “With your background,” the family knows you have the skill and ability to find your nephew and bring him back.

Now, whether or not you bring back your nephew is up to you. The most compelling argument going for The Church in the Darkness is that it might be a good church. Or a bad church. That’s where a clever branching narrative conceit comes into play. Each run could reveal either evidence that the church is doing more harm than good, or that the church is relatively harmless. At the start of a run (which could last between one or two hours of game time), you can choose whether you have the same Walkers as you had on the last playthrough, or if you want a different set of Walkers. I tried both options. Give me the same. Give me random. It never made much difference. If that was the twist, it was lost on me. 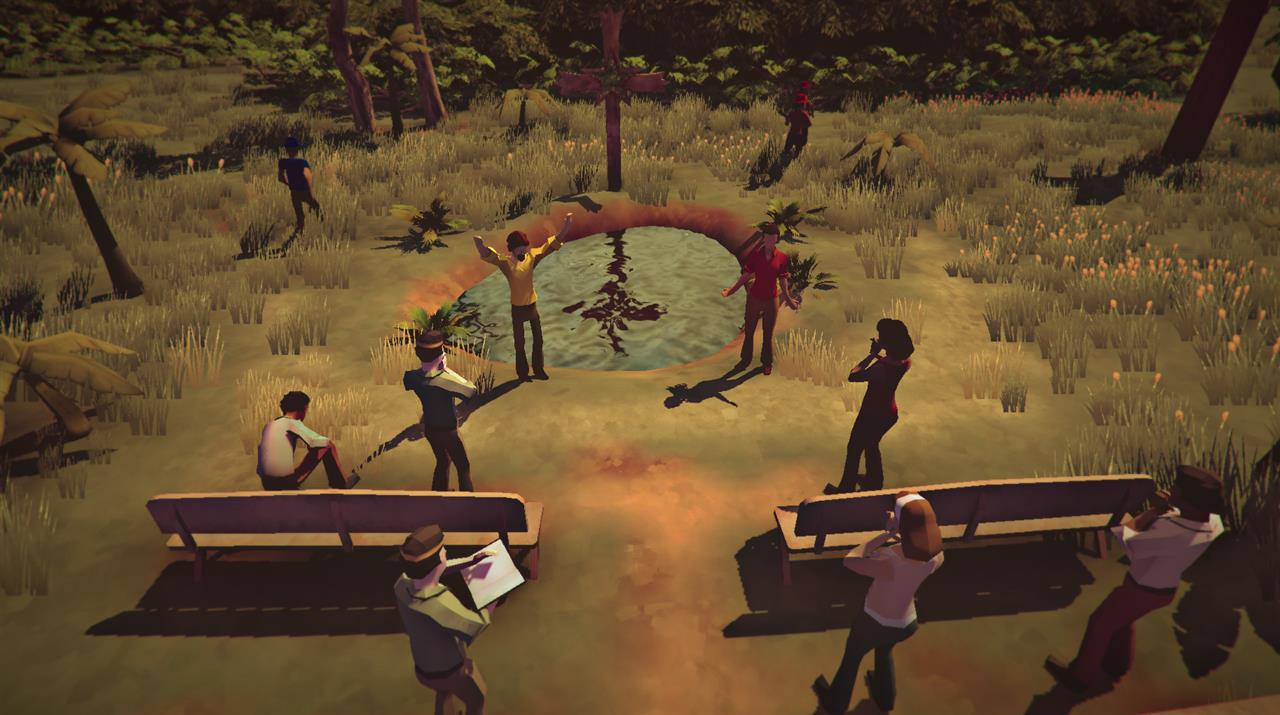 I thought it would be clever. But I feel like after a dozen runs—most of them failures—that I repeatedly heard the same phrases and sentiments stated over and over by the church’s pastors, the Walkers. And I understand that them being anti-capitalist certainly doesn’t make the Walkers bad...but they sure didn’t have a nice way of saying what they were saying. So, it’s possible that I had multiple playthroughs of a “good” Church in the Darkness, but I could hardly tell, since a majority of what I heard from them over the PA system was relentlessly angry stuff.

Here’s how a playthrough, for the most part, goes: Start at a random insertion point on the edge of the map; walk, run, and sneak your way past guards and civilians; talk to the rare helpful individual; find your nephew; extract or leave your nephew. 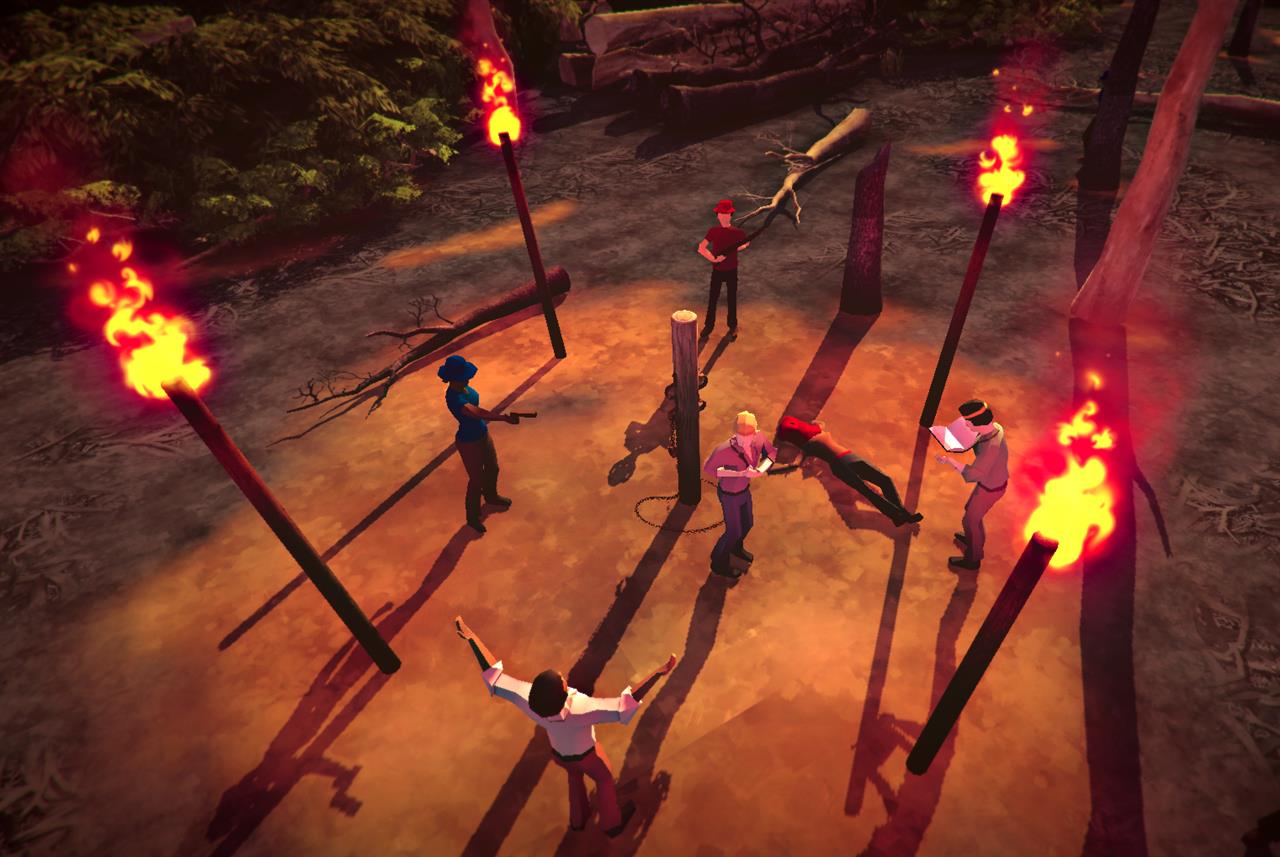 The church grounds are filled with tropical trees, with several chokepoints heavily guarded by armed guards. Why does a church need armed guards? Well, whether your scenario has handed you a good or bad church, it’s a church that is fully expecting to be attacked by an outside force. They’re locked, loaded, and ready to protect this neck of the woods that they’ve built for themselves. You can find a gun, too. There are even shotguns hidden around in chests and cabinets throughout the church grounds. You can even kill a guard or two if you want. Good luck with that, though. There’s a lot more of them than there are of you. And there isn’t enough ammo in the world to take them all out.

That’s where the rest of the findable inventory items come in. Items that can disable alarm boxes, cause alarming distractions, or even disguise you to look a little more like one of the church folks living here already (a pale Panama hat can go a long way if you prefer going incognito). There are medkits and painkillers. You know, for when you catch a cap but manage to sprint away, circle around a small cabin, dip inside, and duck into a clothes closet to hide. 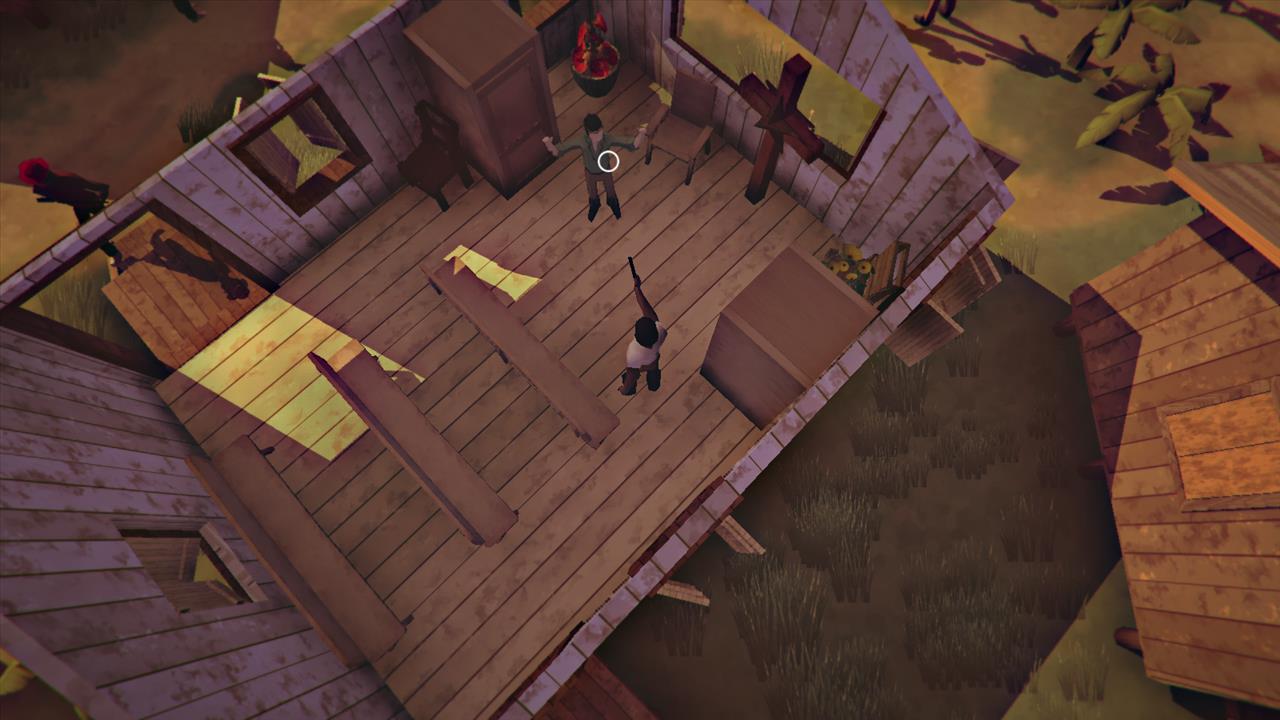 Then you climb back out when the coast is clear. The guards wield mean shotguns, but they aren’t too bright when it comes to tracking you down. Which is a good thing. I’ve had a tough enough time as is. As it turns out, stealthing your way into some embittered churchgoers’ camp in the middle of a jungle to yoink one of their members away is no easy task. In fact, it’s just hard enough, and the gameplay just dull enough, to make it not worth the effort.

In an industry crammed with top-notch artists and programmers, everything you see in this game is an eyesore. The jungle is ugly and untraversable. The riverside is stiff-looking and bland. The cabins and church buildings are so basic as to be boringly realistic. The textures on everything, from the leaves to the ripples in the water feel cheap and cheaply implemented. The entire map is made up of such lackluster details that it’s impossible to tell where you are without glancing at the map every minute—even after a dozen playthroughs. 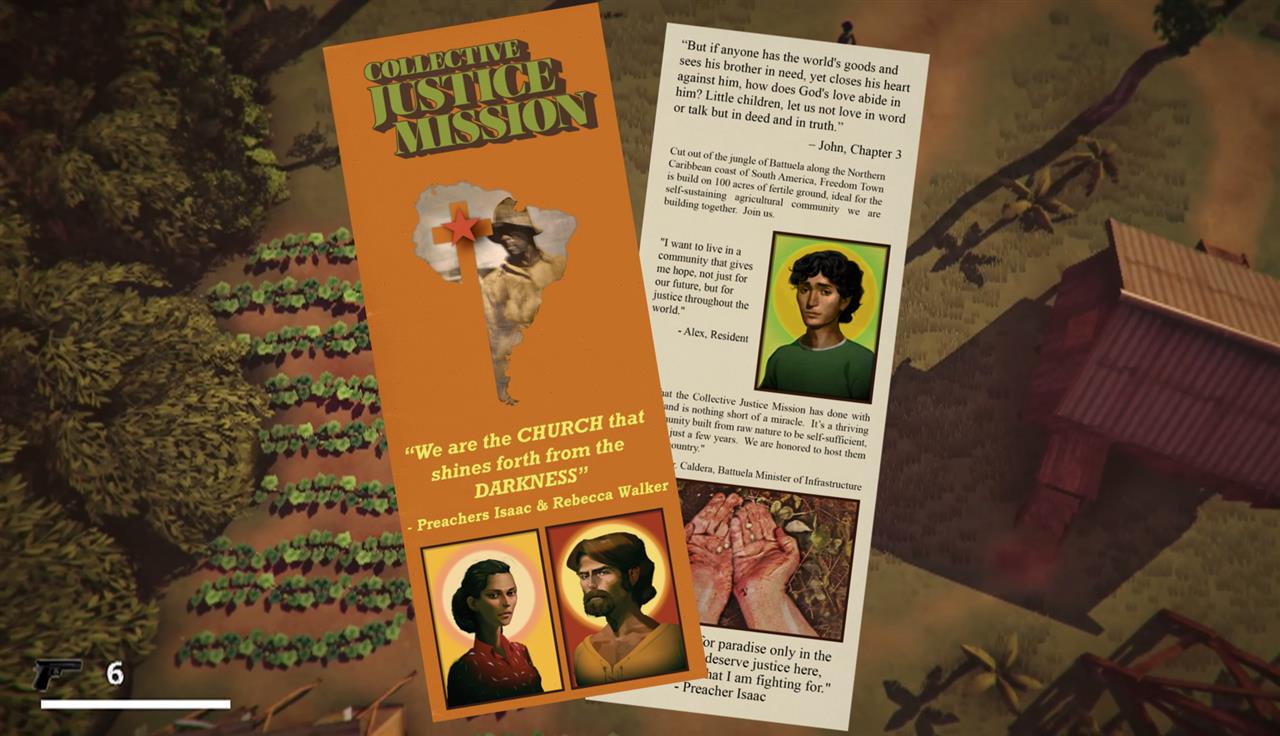 Eventually you’ll see details that seem a bit...off. The folks gathered in prayer before the cross are fine. But what about the dead body lying in front of them being nuzzled by pigs? They have playgrounds but no children around? One of the first people you meet that seems helpful is actually firing a shotgun at animal heads on spikes. Prepare to receive some mixed messages.

Sometimes you get a decent Bible passage spoken over the dozens of PA speakers scattered across the compound. I’m guessing those come from the “good” Walkers. But more often than not, it’s just one of them spouting off about why you used to be in a bad place, why your family is still in a bad place, and why America is that bad place. 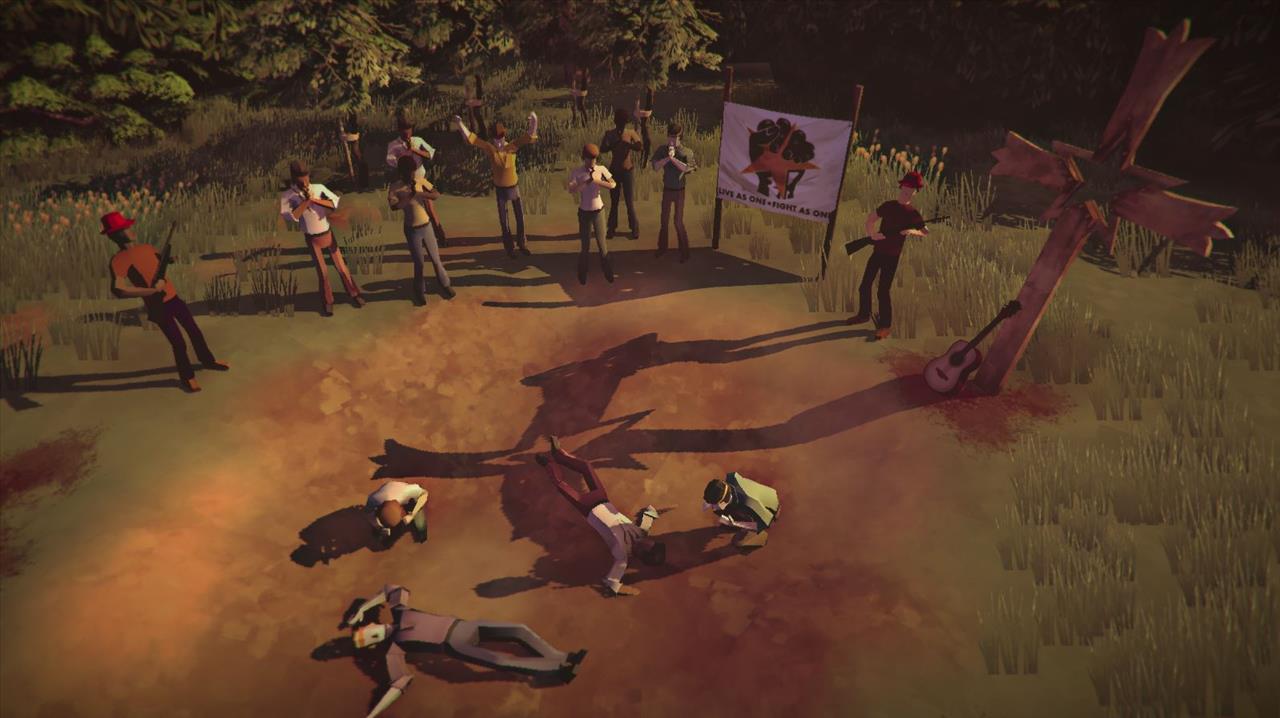 The PA messages are both random and repetitive, incessant, and disruptive. Honestly, who could find God in this place that is nothing but Isaac and Rebecca Walker running off at the mouth every 30 seconds? I can’t imagine much love existing in this church, whether it’s a reading from John chapter 3 in the Bible, or if it’s talking about the benefits of cassava fruit. Who could possibly find peace with unskippable audio logs triggering ceaselessly throughout all hours of the day?

The stealth gameplay is as simple as it gets. One, stay out of everyone’s cone of vision. Two, toss a rock to distract a guard. Three, hide in a closet. That’s about it. And yet, it’s difficult to pull off a win once the apathy sets in, which is early and often.

While taking place in the 1970s, The Church in the Darkness is talking about right now. They call out “fake” progressives. They ask, “Was America ever great?” These are the words that The Church in the Darkness built its foundation on. The church is running from those words, yes. But building upon them. There are multiple endings, but I only recommend one: The one where you find your nephew as quickly as possible, and make a bee-line for the extraction point.

While interesting on paper, The Church in the Darkness is mostly just a collection of anti-capitalist audio logs blaring over harder-than-it-needs-to-be stealth gameplay. There's no love lost in this place.