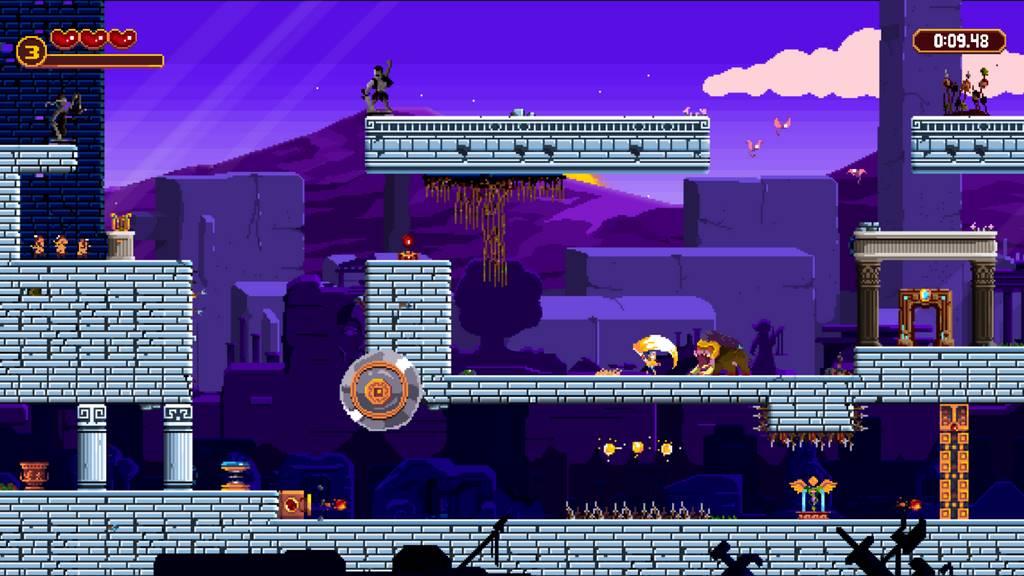 Million to One Hero

It took a while but several years ago we finally got a custom level maker for one of gaming’s biggest franchises in Super Mario Maker on the Wii U and later the 3DS.  It let players create and share levels of their own designs and play thousands of different levels from other creators in one of four styles of Super Mario Games (the original, 3, World, and New Super Mario Bros.) and the creation system was pretty robust.  There have been other custom level makers before and since, both official and unofficial with Mega Man Maker coming to mind.  However, on the official front we have a level creator game that does things a little differently than what Super Mario Maker offered in a couple of ways.  That being said let’s take a look at Million to One Hero on Steam.

Million to One Hero actually has a bit of a story to it.  In the game you’re traveling through the memories of the god of time Chronos and learning about an aspiring hero named Epicus who dreams about becoming the greatest legend in the world.  The memories you’re traveling through is essentially the stages you play as you control Epicus.  The first “adventure” you go on (and I’ll explain why I put that in quotes in a moment) is essentially a few stages that act as the game’s tutorial.  Epicus has a few basic moves that you’d expect from a platformer such as run, jump, and attack.  Epicus can wall jump by jumping against a wall and then just jumping off of it again.  The wall jumping isn’t bad but it took me some time to get used to the fact that when you’re sticking to the wall and start to slide down it, you can’t leave the wall unless you either slide down to the bottom or jump off of it; in other words, you can’t just drop down by letting go of the D-Pad.

Epicus can also dash in any of eight directions, even in the air, but only once per jump.  Combining that with wall jumping and you can kind of complete stages in ways that the creators didn’t intend.  You can also pick up certain abilities in a stage such as a shield that will send out a short-ranged blast and can act as a parachute…just go with it.  The tutorial stages don’t really introduce these items that well, if at all, so it’s kind of up to you in most instances to teach yourself how something works.  Thankfully you do have three lives to start with and each stage will typically have at least one checkpoint.  Throughout the stages you’ll see coins scattered around and picking up ten of them will net you an extra life.  Pretty useful as we’ll see in a moment. 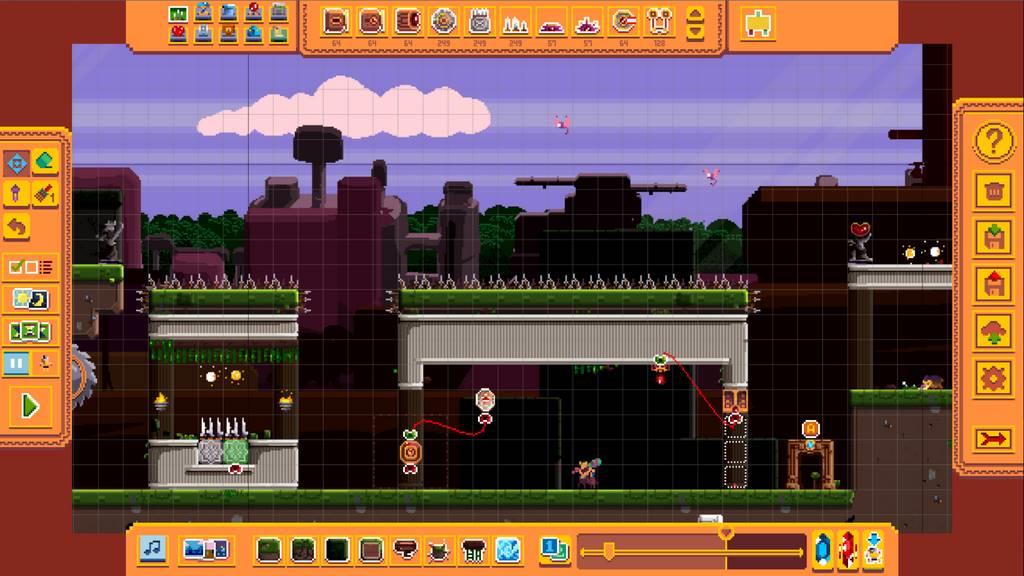 I mentioned this being pretty much a level creation game similar to Super Mario Maker and it’s time to get into that.  Million to One Hero kind of works like Super Mario Maker in that you can create your own levels and play levels made by other players.  If you choose to play a level you can sort the list by most popular, newest levels, and so on, or you can search for a level.  However, there were a couple of times where the search function doesn’t seem to work properly.  Once or twice I would type in the exact name of a level and nothing would come up, though it was few and far between.  It can also be annoying when you type multiple words and the game brings up results that contains at least one of those words.  For instance, searching for “Monkey Jump” (without the quotes, though even using the quotes I got the same results) brought up four results.  All of the results had the word jump in it somewhere but only one had the word monkey.

The other two options for playing levels are playing an Adventure and the Weekly Feat.  The Weekly Feat is simply playing a few stages created by players that focus on speedrunning that change weekly.  However, these stages can be rather difficult as if you’ve played Super Mario Maker you’ll have no doubt seen some of the insane things people can come up with.  These may not be that bad but the first one I tried I could barely pass the first obstacle.  As for adventures I mentioned I’d explain why I put that word in quotes earlier.  Adventures look like they’re a full-fledged game and that was my first thought when playing.  In reality Adventures are several stages linked together on a map screen and your goal is to get to and clear the last stage.  There are several different map layouts that you’ll come across but at most you’ll only have to clear a few stages to complete the adventure.  In other words, if you were expecting adventures to be a full-on game, they’re more like a single world from a Super Mario game. 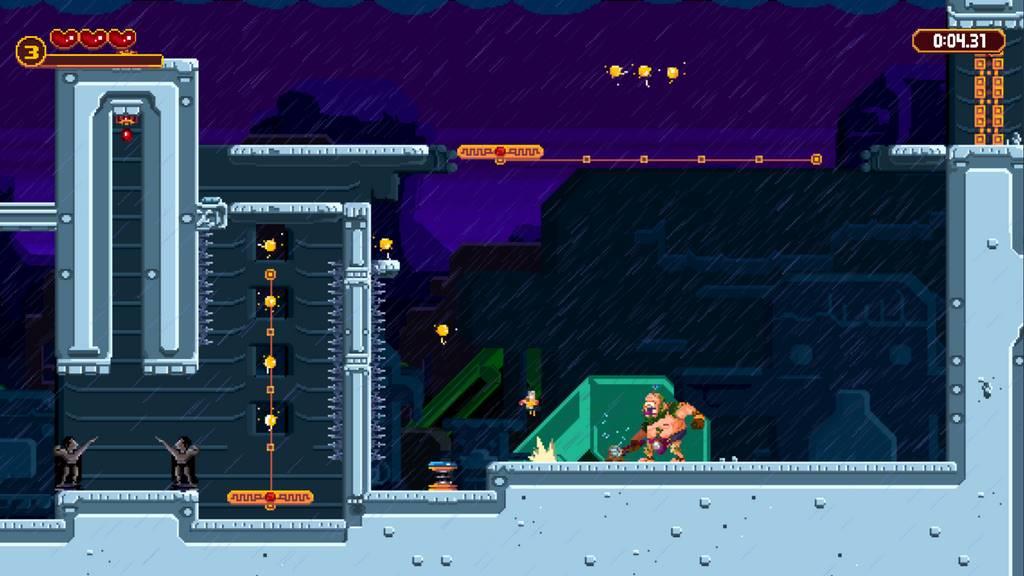 The level creator is pretty robust.  When first loading into it you can choose to create a level or an adventure.  The level creation is where the magic happens and there’s a lot you can do.  You do get a text tutorial when loading it for the first time but as with Super Mario Maker the best way to create a level is to just experiment.  You have a wide range of elements at your disposal to make a 2D platforming stage however you wish.  You can even use logic tools such as AND and OR (similar to various programming languages) to link gates to switches where you have to press multiple switches to open a single gate for instance (you can also just normally link a single gate to a switch).  The one issue though is that you do get a rough “tutorial” for how to use the level editor, but a lot of things are still left unexplained.  You can hover over a button to see a tool tip, but a lot of the icons on the screen are very small and it’s hard to tell what they are at first, and I’m using a thirty-two inch LCD TV as my monitor.  Once you’re done you can upload and publish your level and begin making a new one, or head over to adventure creation and combine multiple stages into a single Mario-style world.

I went into Million to One Hero not expecting 99% of it to be creating and playing custom levels (I was thinking it’d at least have a longer adventure mode of sorts), but that’s not to say I didn’t enjoy it.  One thing I love about games like Million to One Hero and Super Mario Maker is seeing what other people can come up with and, with Mario Maker and the fan-created Mega Man Maker, playing brand new levels from my favorite games.  It’s pretty much like a game that never ends until the servers shut down which typically is a long ways off.  Granted like Mario Maker you’ll get stages that seem almost impossible because creators like to test players’ skill and sanity, but I digress.  At only fifteen dollars it’s a really well polished game if you’re a fan of platformers.  Whether you want to play a bunch of custom created levels or want to flex your own creative muscles, Million to One Hero is definitely one way to go.

Million to One Hero is a well-polished game in the “custom level creation” genre (is that a genre…well it is now).  The controls are fluid and you’ll have to employ a lot of skill to finish some of the creations players can come up with.  The level creation itself is pretty robust, though it would have been nice if some of the icons were a little bigger on the screen, and combining levels into a mini-adventure is a nice touch.  If you’re a fan of 2D platforming and level creation, you’ll find a lot to do in Million to One Hero for a satisfying price.