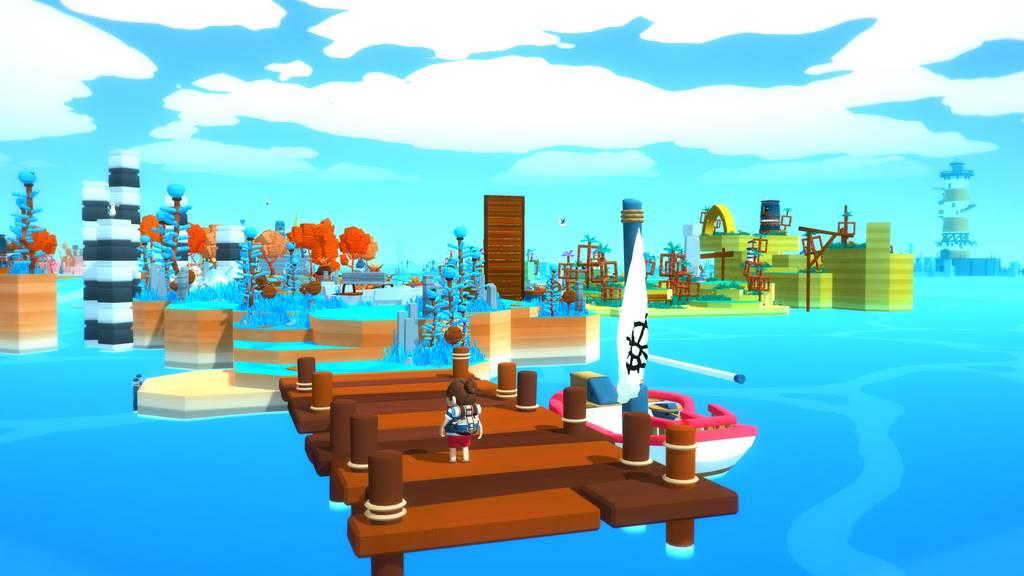 Solo: Islands of the Heart

My first impression of Solo: Islands of the Heart is that it’s really, really, really trying to help me do something. Or learn something. Or think something. I boot up the game and immediately realize that I am not taking on the persona of another character; this is me, digitally transposed into the game. I enter my gender, the gender I would like to love (it’s worth noting that nonbinary is an available option here, which earns major bonus points in my book), my appearance (from a whopping three options, all of whom are white), and the name of “my most beloved one.” You are meant to answer the questions based on my own lived experience, the game tells me almost right off the bat. Already, the boundaries between game and life feel blurred, and I can tell that this is a game of introspection—a game meant to provide me answers to my own love-life questions through guided self-examination, perhaps?

Well, I don’t really have any love-life questions, seeing as I’m getting married to a woman who I love very much and with whom I have very open communication, but at this point I’m interested to see where the game takes me. The first totem insists that these questions to follow will “shed light on my shadows,” and hey—maybe I have some shadows I didn’t know about. What the heck, I’ll bite.

The structure of Solo: Islands of the Heart is simple and uniform, if not a bit repetitive. I start at my own house, sitting atop a tiny island, and I hop into my boat to follow a beacon that has just appeared on the horizon. Upon arriving at the beacon’s source, I see an island with strange white giant white Easter Island head-like creatures who leave me with overly poetic-sounding advice and stories. At its center sits a large totem. I arrive at the totem and it asks me a question about my love life. When I answer, another island connected to the first rises from the bright blue waters, and I walk to that one. On this one, I have to figure out how to get to a small structure that activates the larger totem and them make my way to said totem, at which point it will ask me a question about my love life, and another island will rise from the depths, and so on. After each question, the color of the island will change and flourish, and I am free to proceed. Overall an intuitive system, if a bit monotonous, but the differing colors and styles of the islands help to break up the monotony. 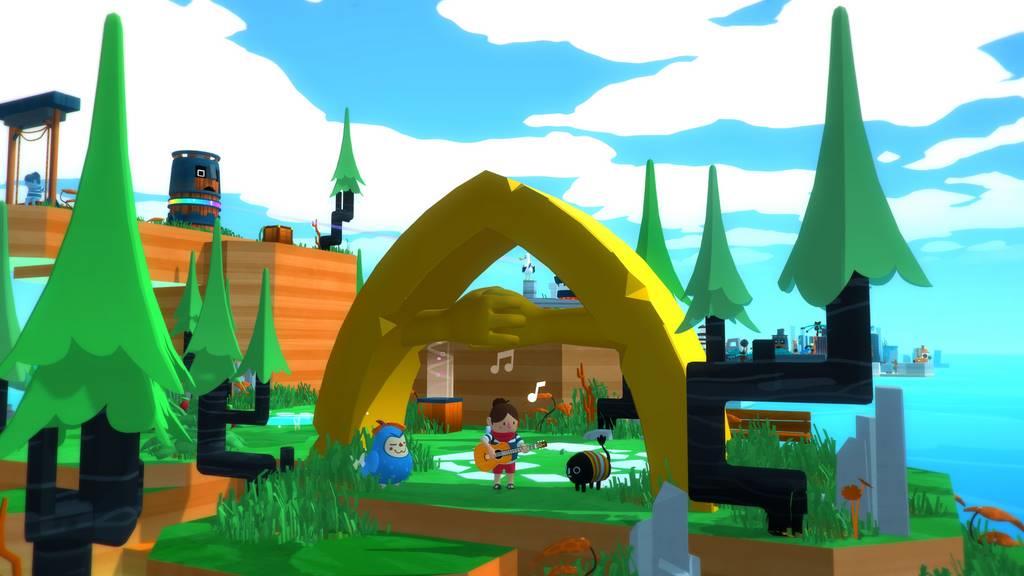 Already, I’m getting the sense that this game is trying to be something that it’s not, but being the oversharing goof that I am I actually enjoy answering questions about my love life, so I can overlook it at first. I solve the puzzles, utilizing anything from blocks to fans to a parachute to reach the totem and unlock the next island in the archipelago, and I almost look forward to the question at the end. Of course, this could just be me; I really enjoy talking about deep stuff with people I’m close to, and considering my fiancee is sitting next to me during most of this playthrough it feels like conversations we have had before. Do I have love? Do I want my love to last? Is time killing the passion in my relationship?

Wait. The questions are changing. The more I proceed, the deeper they become, and the harder they are to answer, but not because the subject is a difficult one. I select my answer from a multiple choice list, and increasingly often I find that my answer is not there—a tactical error for a game that urges me to answer based on my own lived experience. For example, one of the later questions asks me to decide between my family and my beloved; should the situation come down to it, who would I choose? As somebody who has luckily never faced this problem—my parents and my fiancee get along like cinnamon and sugar, and have basically already become a full family unit even though the wedding isn’t until next summer—I feel like any answer I select will be a lie. 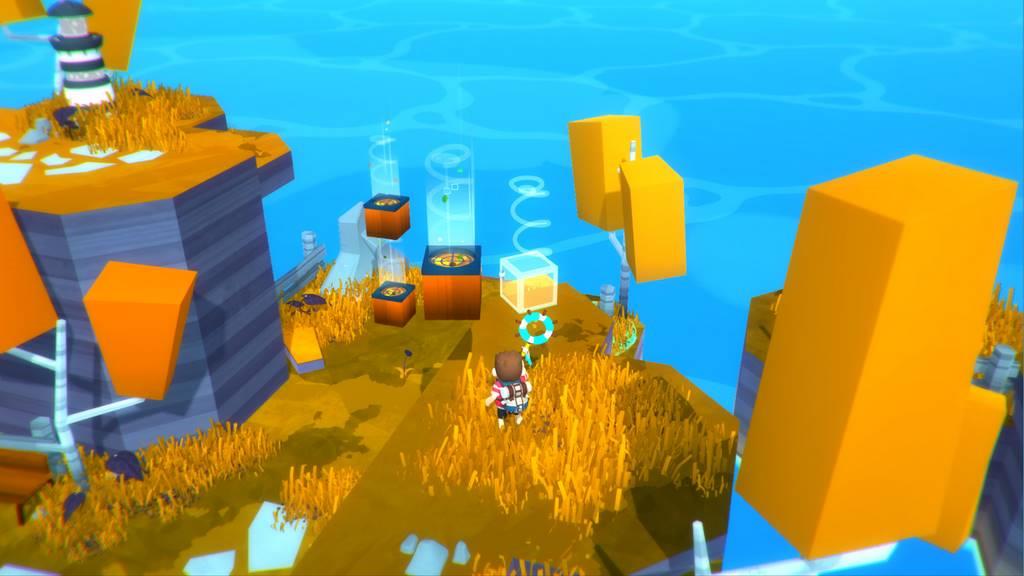 This wouldn’t necessarily be a problem if A: the game weren’t so insistent on answering based on my own experiences, B: the game wasn’t trying to be as deep as it is, and C: the answer had no effect on the rest of my playthrough. But alas, life can’t be so easy. Throughout my entire journey, a ghostly figure pops up to help me activate totems and to reset my puzzles when I fail beyond comprehension, and given the dialogue I can only assume that this person is meant to be a representation of my beloved (who, if I can remind you, is sitting next to me in real life as I play). This figure reacts to my answers to the totem’s questions, often in a negative light; I’ll come across them sitting on a ledge near my puzzle, and every time I walk near them they will voice a concern about the last question I answered. Will I be bitter choosing them over my family, who I’ve spent my entire life with? Could I love them without making our relationship more physical?

My real-life fiancee, who sees this ghostly figure’s reaction to all of my answers, responds with a hearty “Oh, come on,” because unlike this ghost, she has sense and trust, and she actually knows me. This game is trying to know me in a similar fashion through a series of pre-programmed questions and responses, which just isn’t possible without real human connection and conversation. I get that nothing is truly universal, and that it’s entirely unrealistic to expect to find my exact life experience in a video game, but on that same token the game shouldn’t insist that I’m even able to answer according to my life experience.

So we’ve established that Solo: Islands of the Heart is, in its quest to shed light on my supposed shadows, a bit fake deep. Or maybe really fake deep, depending on who’s talking to me. (Those giant white guys that look a bit like Easter Island heads need to calm down with the lyrical poetry.) This is already at odds with the overall style of the game, which to me feels like Rime mixed with Overcooked, of all things. But then we get into the controls, which is a whole other rabbit hole. 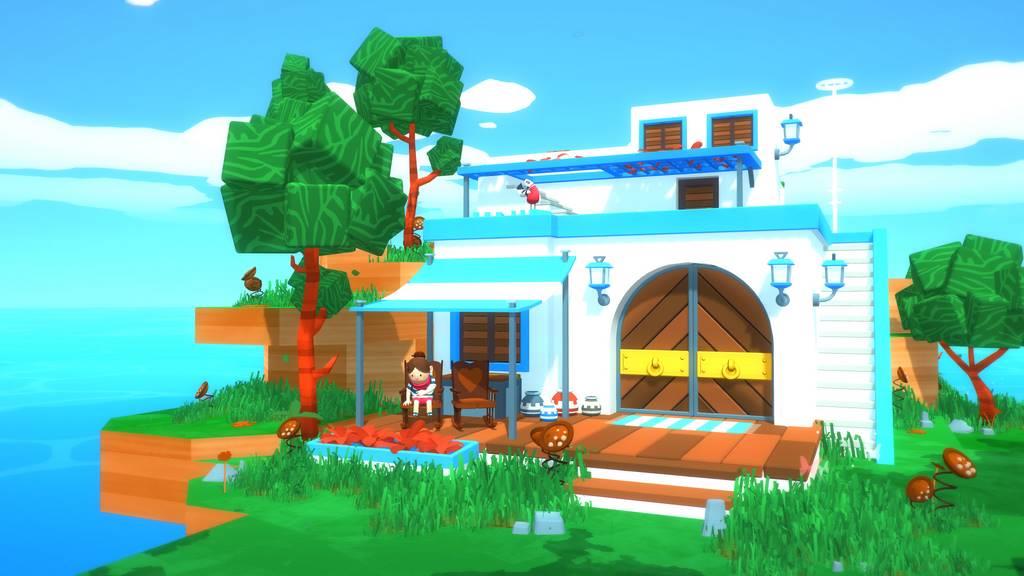 Nothing is inherently bad about the controls; in fact, some of them are very intuitive and work very well with the way my brain thinks they should work. (Auto-snapping comes to mind here, which is very useful when trying to stack boxes with precision or if I’m working at a bad camera angle.) My main problem with the controls is that I receive very little guidance on how to use them. There’s the Controls screen that pops up as the game is loading, but this isn’t super helpful when I don’t yet have half the items that are listed on the control map. The Y-axis starts out inverted by default, which I would expect to see in an airplane sim but definitely not in a sedate, colorful puzzler. I didn’t figure out how to sprint until I was over halfway done with the game (but maybe that one was just me being dumb, I don’t know). I didn’t realize that I had a guitar until most of the way through the second archipelago, and even then couldn’t figure out how to actually play it for a long while. (Once I did, I discovered that the songs actually do things a la Ocarina of Time, such as change the weather or turn my entire world grayscale, which was admittedly a very cool addition even if I wasn’t sure what purpose they served.)

You know that feeling when you meet somebody for the first time, maybe a friend of a friend or a new coworker or a blind date, over coffee, and the conversation starts out very surface—like, how was your day, how ‘bout that weather, did you see the game? And then when you try to dig deeper, to really get to know the person, your attempts to relate to them don’t always work because their experience is entirely different than the assumptions on which you’re operating, or the other way around? That’s what it’s like to play this game. At its core, it’s a very cute game with a lot of promise in its design and premise, and it even excels at puzzle design. However, it tries to go deeper and more personal than the limits of a video game will allow, and therein lies its fatal shortcoming.

Solo: Islands of the Heart seems like it’s trying to be your counselor. Go to an actual counselor. The gameplay is calming, the scenery is cute, the colors are vibrant, the design is unique, and the puzzles require a good amount of thinking without being too easy, but its attempt to analyze a real human person with pre-determined questions starts it off teetering on the wrong foot. It never quite regains its balance.