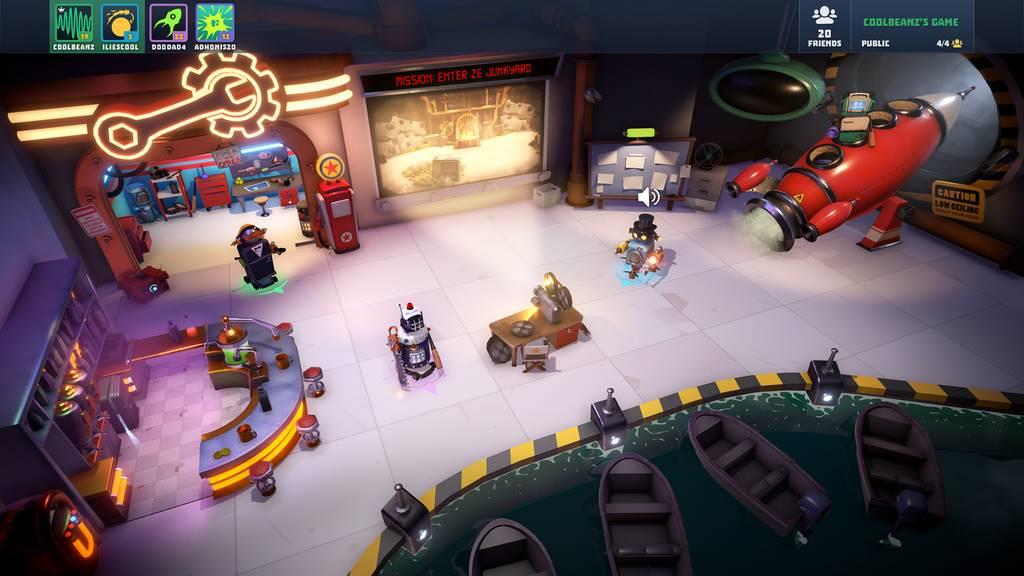 Written by Russell Archey on 7/25/2019 for PC
More On: Second Hand: Frankie's Revenge

Remember back in school when you had your annual science fair and you had to come up with something awesome that would secure you first prize?  Then remember how you ended up just cobbling something together from random things and passed it off as your project?  Yeah, neither do I, but then again I come from a small town that never really had science fairs, and even if we did I wasn’t very scientific or creative.  The bad segue I’m trying to make here is I recently got the opportunity to check out Second Hand: Frankie’s Revenge in Steam Early Access, so let’s see what happens when we create a robot from random stuff lying around.

The game starts with a tutorial to show you the basics which as well introducing the story which is that aliens are taking over Frankie’s world.  Frankie comes equipped with five different parts: his head, main hand, second hand, body, and legs.  The head lets you use a special ability that uses up your special meter, your main and second hands can each attack enemies with various parts though your second hand weapon consumes special energy, your body can define how much health and special energy Frankie has, and your legs can also have a special ability, your default legs (which are a lawn mower…I’m dead serious) giving you a short dash ability.  The weapons can lead to some interesting combo ideas such as a boxing glove and a tennis ball launcher, or a cutlass and a boxing glove (yes, there are two boxing gloves you can equip).  Personally I found the combination of a Disco Ball for a head along with a chainsaw and a tennis ball launcher as a decent combo for the early game, but I’ll get into that in a bit.

The gameplay doesn’t take long to get the hang of and while you can use a keyboard or a gamepad, I prefer using an Xbox gamepad.  Frankie’s Revenge plays from a top-down isometric perspective and you can move in any direction.  Aside from using your two weapons and your special ability, you can also perform a short dash forward and you can use the right analog stick to rotate Frankie.  This lets you move in one direction (such as away from an enemy) and attack in a different direction.  I didn’t utilize this too much early on as I didn’t really see a need for it…until I encountered enemies that can hit you rather quickly and you really don’t have many invincibility frames so you can take damage pretty fast if you’re not paying attention.  You’ll also learn about various items that will give you temporary buffs as well as health packs lying around.  Scattered by defeated enemies are little bolts you can use to purchase items in the garage, but these seem to be only for aesthetics such as a little balloon Frankie can have. 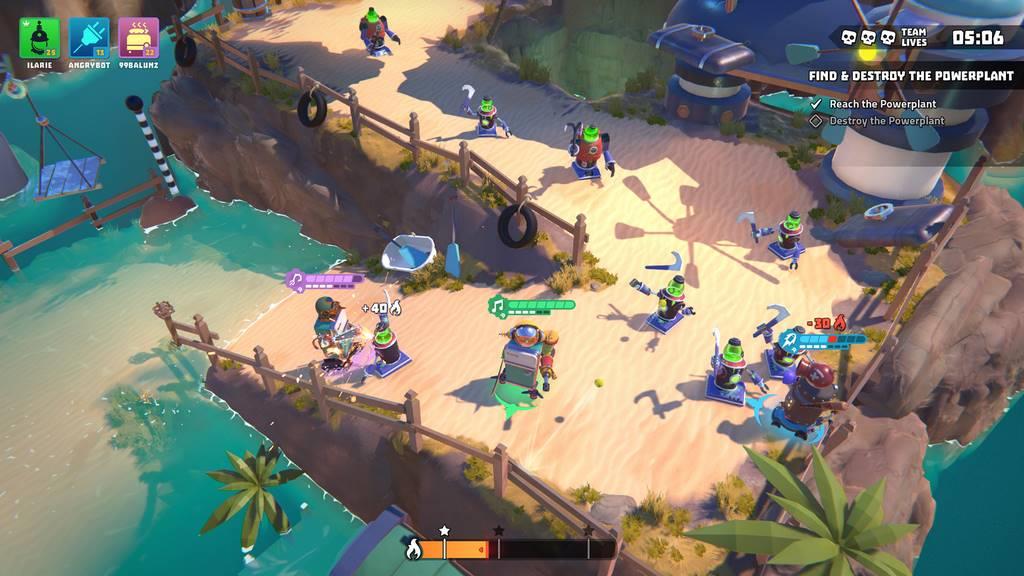 The stages aren’t straight forward get-to-the-end-of-the-stage stages as there are some specific things you might have to do besides just defeat enemies.  In one stage you have to follow a mine cart and constantly give it coal you find on the ground to keep it moving (it’ll just stop if it runs out of coal so you can take your time).  Another has you fishing for batteries in a lake with drones to open a door.  A few times you might have to hack something with makes you play a small mini-game.  You’ll see a black box above you and a white box at one point and a moving white bar going back and forth.  You have to press A when the bar is over top of the box about three to five times to succeed.  Miss any one of those attempts and you have to start again, though it’s not a long process; it’s just you might have enemies trying to kill you at the same time.   All of this, along with the parts customizations and the occasional items you’ll find lying around in breakable boxes in each stage to give you a temporary buff, makes for an intriguing game…but there are a couple of things I noticed that didn’t really strike me in a positive way.

The first actually comes at the end of each stage.  When you reach the end you have to call in a jetpack to escape.  Fair enough and you have to do the “hacking” mini-game to call for it.  Once you do (and keep in mind enemies will keep attacking you as you do all of this) a jetpack will arrive a few seconds later.  When you go to the jetpack and press A to put it on it’s time to escape…by mashing the A button repeatedly to fill a bar.  That alone is okay, but it takes several seconds of this to fill the bar, the more full the bar gets the faster you have to mash the A button, and if you let up the bar begins to empty.  Again, enemies are still attacking you so you have to evade and attack oncoming enemies while mashing the A button as fast as you can and hope your wrist doesn’t fall off in the process. 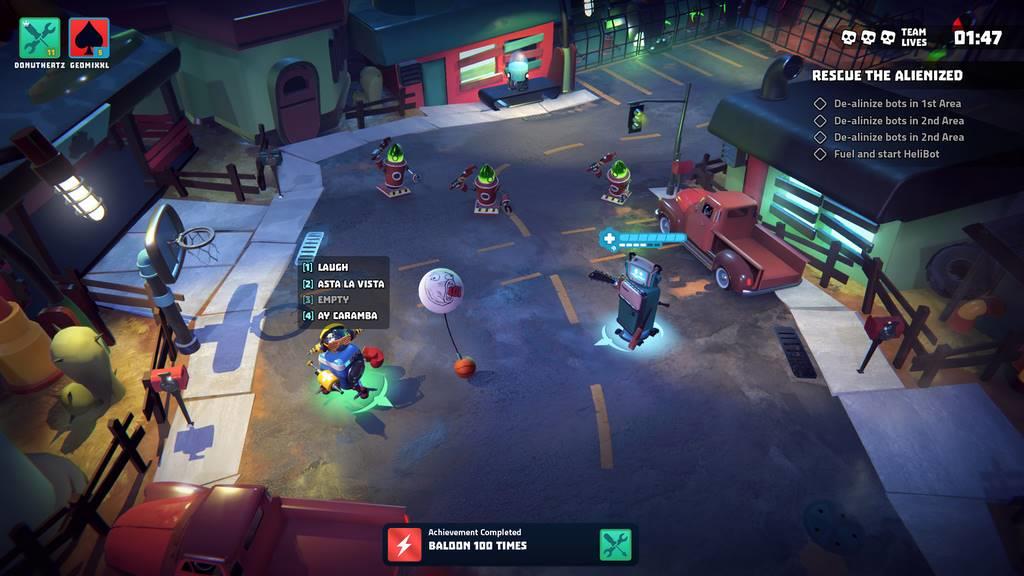 Another issue I noticed was that the lack of options in dealing with enemy attacks meant that often times you would have to move in, get a few hits in, and get back out before you took too much damage as you cant really parry or block attacks.  This can get a tad frustrating with the more challenging enemies and bosses.  There is a weapon combo I found that helps with some of this: the Chainsaw and Disco Ball.  The chainsaw is a main hand weapon that you’ll get after a couple stages of leveling up and can refill special energy, while the Disco Ball is a head item that will stun enemies in a decent radius for a few seconds.  If you can trap at least two enemies in that radios and take them out with the Chainsaw, that will replenish the energy used by the Disco Ball and you repeat the combo over and over .  Again it’s not a perfect strategy for bosses and huge moves of enemies and you’ll be scrounging for nearby health drops, but it actually got me through a lot of the early game.  Just keep in mind that you can only swap parts in the garage between stages.

However, if you’re having issues getting through some tough areas, all you need to do is find a friend or three.  Up to four players can play locally or online, and when creating an online game you can choose to have a public game or go friends only.  Players can drop in and out as they wish, though sadly when I tried to find some online games there weren’t any available which is a shame really.  I’ve been enjoying what I’ve played so far and hopefully down the road more people will come aboard and check the game out so we can see how multiplayer works.  That said though, Second Hand: Frankie’s Revenge looks pretty good for an Early Access game, but I do think a couple of things could be different (in my opinion of course).  Having bolts only be used for purchasing aesthetics kind of makes them pointless in some ways, and new weapons are only unlocked as you level up and that’s seemingly all leveling up does.  If they changed what leveling up does (increased damage or HP above what your parts already provide) and made you spend those bolts on the new parts, that would be nice as it would provide an incentive to scrounging for every bolt you can find if you got to pick which part you wanted to acquire.

That being said though if you like these kinds of games, Second Hand: Frankie’s Revenge is pretty good and I hope it only gets better.  For around sixteen dollars it might seem a tad high for a simple game like this still in Early Access, so if you’re on the fence about it you might want to check out some gameplay first.  Hopefully as the developers make progress and word spreads around a bit more we’ll start to see more people checking the game out and maybe even get some online play in.  Who knows, you might even see me playing a bit.  I’ll be the robot with the Disco Ball head, Chainsaw, and Tennis Ball Launcher.  You know, only the best in customizable robot warfare.