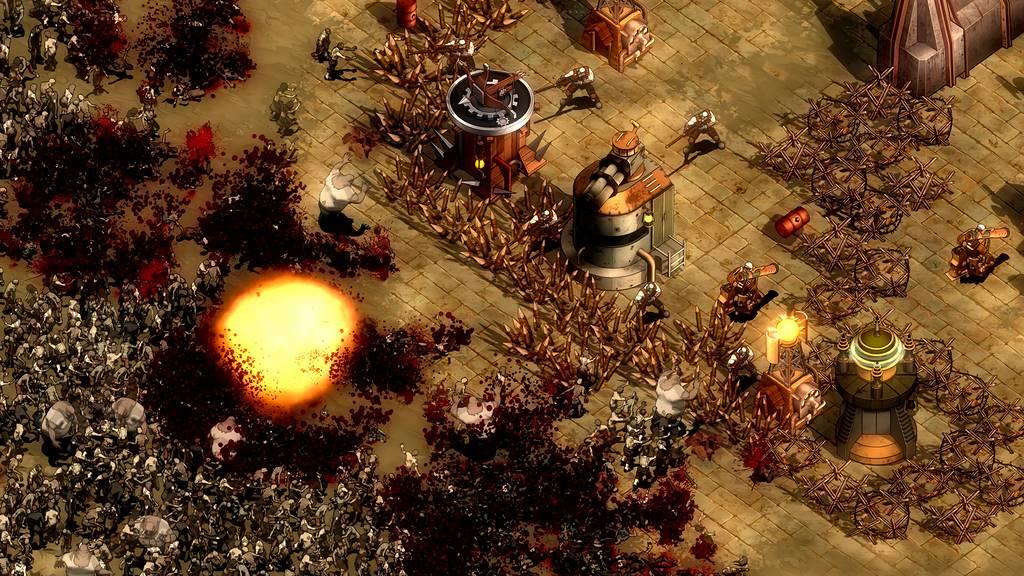 The clock is ticking. You've got just days before an inevitable horde of the undead are at your gates. Days to prepare your defenses and fortify your stronghold. They're coming, and They Are Billions.

They Are Billions debuted on the PC in Early Access in late 2017, finally saw its full release last month and was ported to consoles at the beginning of this one. It's a real time strategy game that starts you off with a base and handful of units in a Steampunk world with a singular mission and focus: survive. Send out your scouts to explore the terrain, build up your colony with workshops and foundries, harvest and manage resources, train an army to push back, and build the walls high and strong with towers to defend. Do what you can, as fast as you can, and know that eventually, the World War Z style horde will make its way to your gates. It's a cool gameplay loop for an RTS game. It offers something a bit different than the others in the genre, because you have no real opponent you are racing against to build a force capable of taking over each other's domains. No, in They Are Billions your ultimate enemy is time. You are collecting your resources and constructing your defenses ostensibly against the horde of zombies, but in reality the horde is coming in larger and larger numbers on more or less set intervals, in waves. It's whether or not you can effectively manage your time and expansion in those intervals that seem to determine success and catastrophe. So as opposed to the traditional race to the endgame of most RTS games. The sprint to see who can get the most advanced arsenal first from hogging the most resources early and dominate the board in the endgame. In this iteration, there is no intelligent opponent, just mindless masses. I find the shift leads to more action throughout a given play session, as opposed to a whole lot of building while saving most of the conflict to large endgame campaigns in many similar games.

And while the concept is solid and for the most part the execution of the vision is too, my main gripe here is simply how out of place this build of the game feels on console. It's not that the genre is out of place, or even the idea of They Are Billions as a console game, it's really the execution of the actual game on offer to download from the digital marketplace. This is a port with what appears to be very little thought or effort put into it. The on-screen text is impossibly small to read in any setting other than standing up with your nose pressed to the television. So what works with font size for most PC players on a monitor at their desk does not translate to a player on their couch some distance away from a big screen TV. Then we have the control scheme, which is little more than mimicking a cursor with the joypad. There are a few hotkeys set up, but they are hidden to be discovered by chance by button mashing about. There is no tutorial to walk you through them or any on-screen prompts as to what they might be when hovering over the actions you want to perform. I was in my third match before I finally figured out the hotkey to keep my troops moving without having to toggle back into their menu before every new pathing target could be laid down.

But it's not only the lack of thought in the execution that plagues this game, but it also suffers from a dearth of content. You see, the PC release of They Are Billions had recently added a campaign mode with a number of challenges that loosely follows a plot line for a unified experience. That campaign mode is wholly absent from the PS4 port. So all you're left with is a randomized maps with some difficulty sliders on the survival mode, or the one-off weekly challenges. While the weekly challenge is a cool concept (you have one shot to play a common map and all results are posted to a global leaderboard), it's not really enough with only the survival mode to carry players through the rest of the week. It's fun to jump in to a game every now and again, but it lacks any narrative driver to compel dedicated and consistent play time.

While the game runs smoothly and I can't say I uncovered any real bugs in my time with it. There's also a bit of a missed opportunity with the "Steampunk" style the developers attempted to brand the experience. You start your compound with a nice ornate command center, but then slog through wood and stone upgrades. But what you don't really do is dive into any steam based upgrades. Sure the look of some of the structures take on a Steampunk vibe, especially as they upgrade, but bringing that kind of tech into the core research and upgrade experience seems like an obvious mandate when you're positioning the game around that very style. So it ends up all style no substance on that particular point.

In the end this becomes a difficult game to score. It faithfully ports the PC game over to the console. Unfortunately, that's all it does, as it puts no effort into smoothing over the rough edges that a direct port creates. It does however, drop the campaign mode and fails to bring that with it. And while it also fails to fully realize the style the game strives for, it does over a new kink in the RTS mechanics for a unique gameplay experience. All in all I suppose this is a good game that is simply better enjoyed on a PC.

While the game itself is really quite good, the lack of gameplay options and lack of thought into porting over the control scheme make for an average experience overall. This is a port that feels very much like one done with the absolute minimal effort required, and that's just not good enough for 2019 when so many other games this year have done so much better in this same PC to console space.