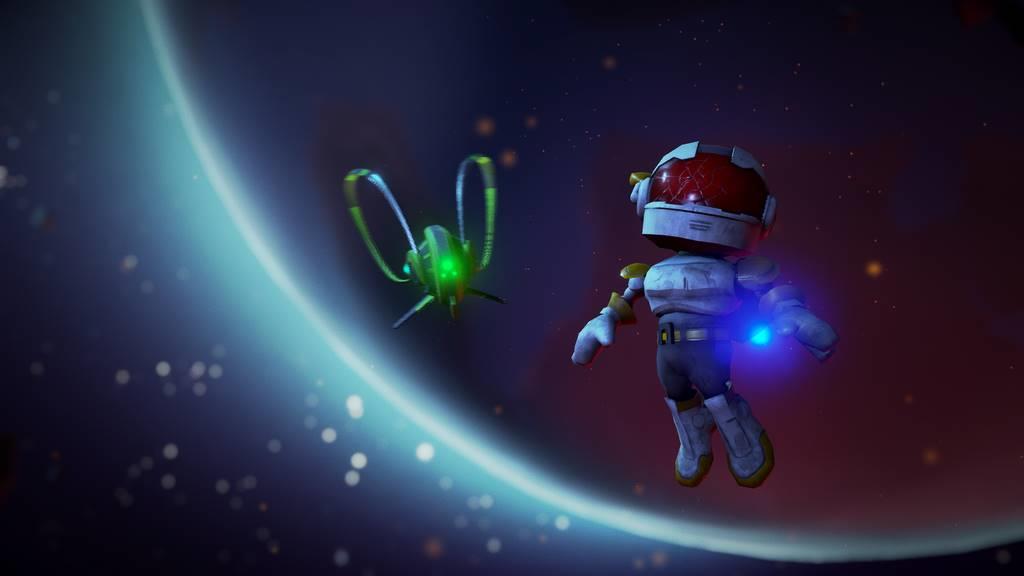 Written by Dave Gamble on 7/16/2019 for PC
More On: LOST ORBIT Terminal Velocity

I’ll just come out and say it: the vast majority of my entertainment choices on the PC are either simulators, or the next best thing, open worlds in the manner of Far Cry. That said, those are what I call “heavy” games - lengthy load times, hours-long sessions, and generally not something I can do to kill the 20-30 minutes between the wife saying “I’ll be ready in five minutes” and the time we actually get out the door. For those occasions, I have a small collection of what I usually refer to as “console” games. Note that I am not slighting consoles in the least; I am utterly devoted to my PS4 for any number of reasons, one of which (and it is not as trivial as it sounds) is the comfortable room its in. That, and its ability to provide quality entertainment when we’re out somewhere in our travel trailer.

LOST ORBIT: Terminal Velocity, which I am going to abbreviate to LOTV in the selfish interest of maintaining my sanity, is just the kind of “console” game that I enjoy as a periodic distraction while waiting for the spaghetti water to boil and/or while I’m boiling with impatience as the aforementioned five minutes approaches 45. It loads quickly, and while there is a campaign mode, it isn’t especially burdensome, although in one way that we will get to soon, it is a touch irritating.

In addition to Campaign mode, there are also ‘Time Trial’ and ‘Challenge’ modes. The difference between Campaign and the other two seems to be nothing more than the inclusion of a story line. Other than that, the mechanics remain pretty much the same. The campaign story is based on an astronaut of some sort who gets separated from his tether and is assisted in his dilemma by a seemingly sentient alien drone/being. You, as the lost astronaut, have a jet pack to start with, and gain upgrades, etc. as you progress through space. The story is delivered via narration and pop-up caption boxes containing the same text. I found the voice to be distracting, so muted the volume to get rid of it. Unfortunately, there was no way to stop the caption boxes from appearing on the screen. The mildly irritating issue mentioned above was that the appearance of a caption box muted the game sounds. It doesn’t seem like that big of a deal, right? Well, it is.

To understand why additional distractions are unwelcome, you have to understand where the challenge is in the game. LOTV is a vertical scroller in which you pilot your little lost avatar through the hostile,crowded space of… space. He can also exit one side of the screen and enter on the other. He can even go backwards when needed. He is very, very delicate and can be killed by bumping into (well, in my case ‘plowing into at full speed’) a hard object. There are, however, objects that appear on the screen but aren’t fatal to touch.They are there as a distraction. In fact, one of the ways the game ramps up the difficulty is by increasing these kinds of visual distractions. As near as I was able to tell, providing a distraction was the only reason for the seemingly sentient drone to even be in the game - he swirls around you like a mosquito with separation anxiety and can take your eyes off of your helpless little spaceman just long enough to splat himself into a planet. 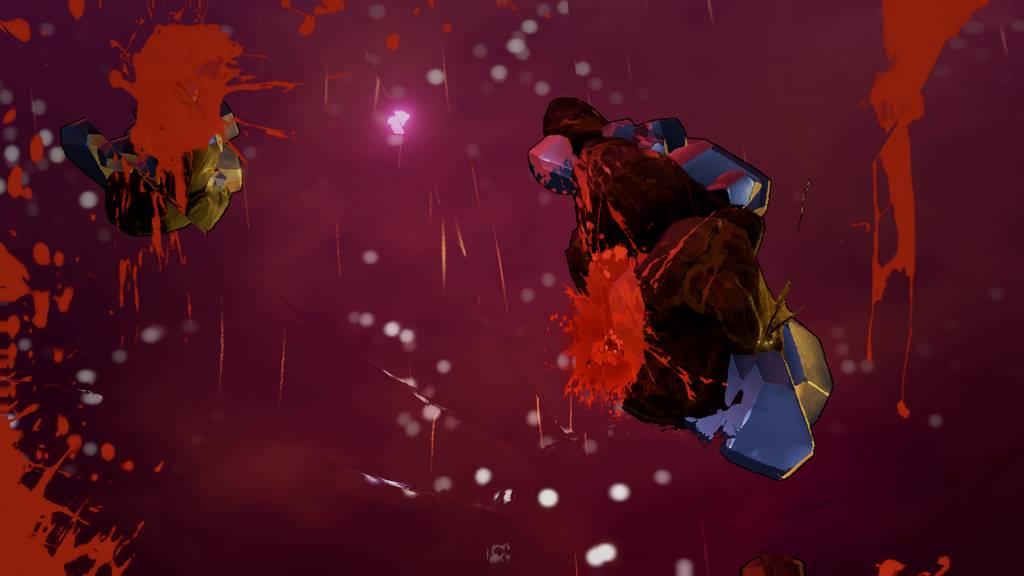 Control of the spaceman on the PC is via keyboard or Xbox controller. I found both to be workable, but ended up preferring the controller. Your astronaut is very responsive to the controllers, but does not behave as you would expect in a deep space environment - release the booster and he quickly slows to a stop. While it's helpful to have him slow and stop on his own, he has just enough momentum to get himself into trouble. As there is only one form of trouble (a bloody splash against a hard object), it matters if you get into it. There is an upgrade that adds a reverse thruster, but that implies you’re still in some level of control as you barrel towards a big rock. That didn’t happen very often at all. Most of my upgrades went into making the booster stronger. As I always say, if you’re gonna die, at least make it spectacular.

Game progression is essentially dealing with more distractions and higher kinetics. There are also little trinkets to gather called “Obtainium.” I found the name amusing - I have often referred to things that seem way overpriced for what they are as being made out of Unaffordium or Unobtainiam. Obtainium is used to buy upgrades, as you would expect. It is also very easy to gather as it is positioned in areas that are likely in the path that you have chosen to wind your way through the obstructions. 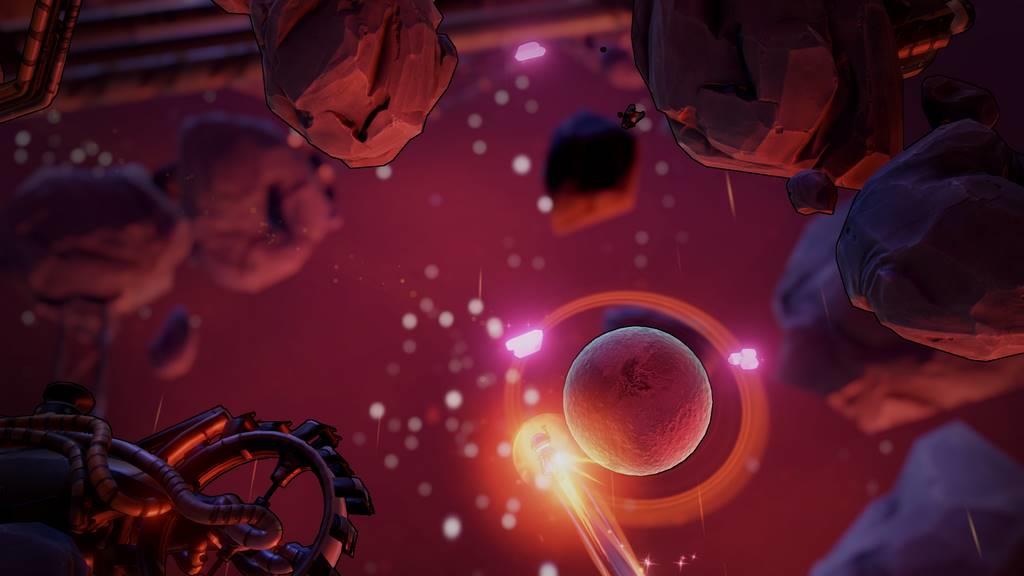 As you progress through a chapter, you will encounter a manageable increase in difficulty. Initially, the deadly objects are just sitting there and you just navigate your rocketman around them. It feels a lot like Asteroids, although more immersive. Sooner or later, there are asteroids coming at you from the top of the screen. Then they start crossing from the sides. A little later the side asteroids start lining up as asteroid convoys. All of this is happening as more and more non-lethal visual distractions are introduced. It was at this level of progress that I realized that at its very core, LOTV is a fabulous mash-up of Asteroids and Frogger, in space. Eventually (thanks to nicely spaced checkpoints on each level) you will reach the Boss level. At this point, all bets are off. Things get extremely kinetic, distractions are at their highest, and if your dogs are as sensitive to shouted profanities as mine are, well…. you might want to give them some yard time.

Scoring is based on time. The only collectibles I came across were the pieces of Obtainium that could be used for upgrades. Given the importance of time, your playing field is sprinkled with ways of getting extra boost. The most intriguing for me were the planets you can orbit. You can safely just blow right on by them without a glance, but entering orbit (which is easy, but not always safe) can refuel your boosters. There are also a few pieces of Obtainium orbiting around them. You enter orbit simply by driving into the planet without any boost applied. Sounds easy, right? You can also get a big boost if you glance across the orbit while using your own booster. Again, sounds easy. But… remember what I said about momentum? 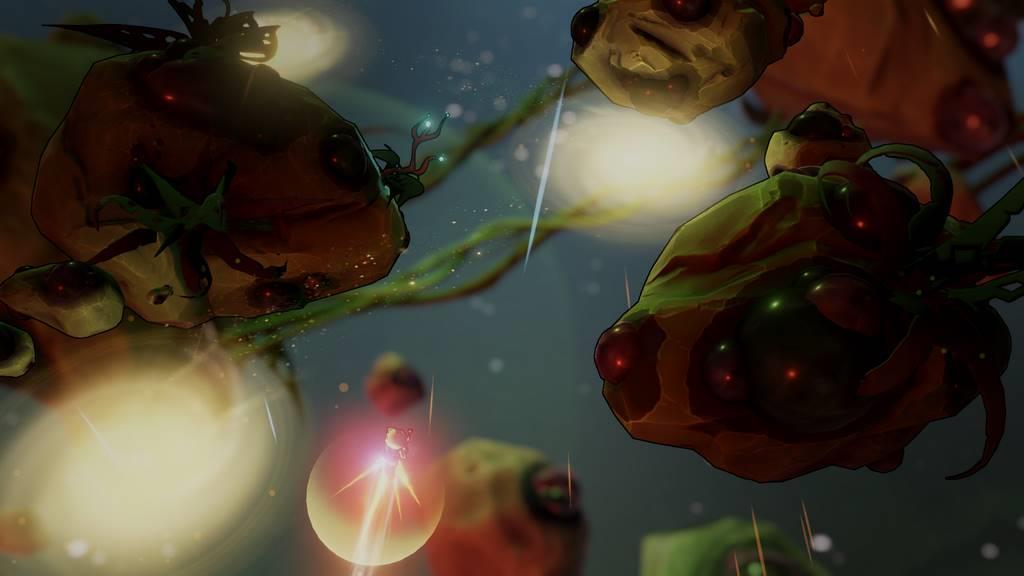 There are also yellow discs that provide an additional boost if you fly through them, but it is a directed boost: no matter what direction you’re going when you hit it, it shoots you off in a specific outbound direction. That outbound direction might be straight towards another yellow disc, which is turn is also pointed at the next one, etc. The problem is that sometimes they aren’t pointed at something helpful, or at least docile.

I quickly learned you have to be very careful about using additional boosts of either variety. My dogs quickly learned new profanities they had never imagined. Next door neighbors too, if I’m honest.

Despite a campaign that tells a story that I had absolutely no interest in, I really enjoyed/am still enjoying LOST ORBIT: Terminal Velocity. It starts out with an appropriately easy tutorial level and increases the difficulty in a number of ways, none of which were found to be insurmountable to an older, slower guy that abhors “twitch” games as much as he dislikes overly steep difficulty curves. The game play can be frenetic, but reasonable spaced checkpoints alleviate the pain. There is no minimum time required to move to the next level in a chapter, so those that just want to play the game for the fun of it can progress through the chapter at their own pace, at least until the Boss level. My cosmonaut died 22 violent deaths before I beat the first chapter.

That seems reasonable to me.

If you can imagine Asteroids meets Frogger in Space, you have a fairly good idea of what to expect from LOST ORBIT: Terminal Velocity. The game play is entertaining and the difficulty levels ramp up at a reasonable slope. The storyline doesn't bring much to the table, but the game mechanics stand on their own just fine.