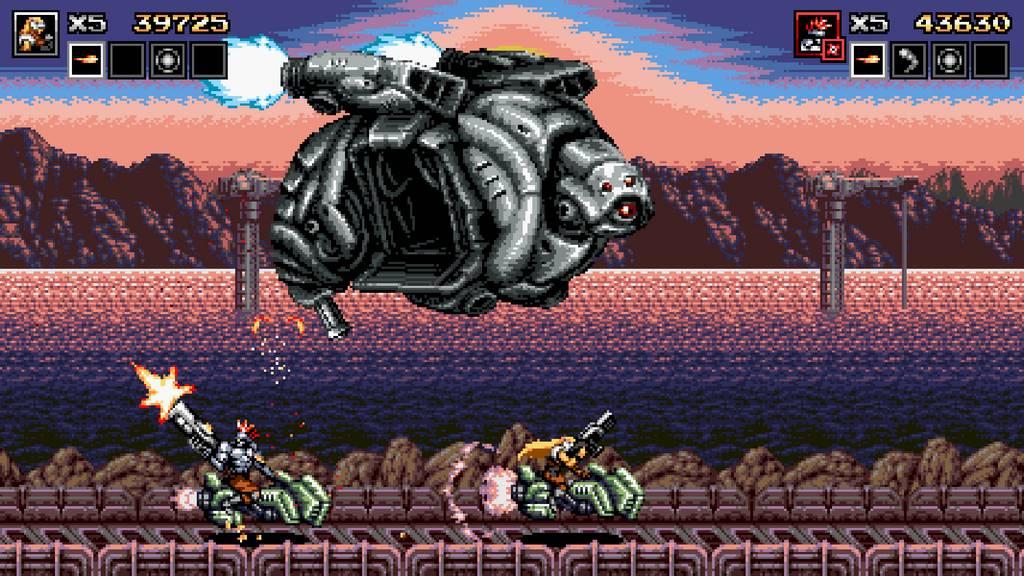 When Konami announced their Contra Anniversary Collection a while back I was excited.  While my experience with Contra isn’t quite as extreme as it is with Castlevania, I still played quite a bit of Contra and Super C on the NES.  Suffice to say that beating them were two of my proudest achievements on the NES as the Contra games have a tendency to be somewhat difficult.  Since then I’ve played a couple of other games that take some inspiration from the Konami classic and that includes today’s game, so let’s take a look at Blazing Chrome on the PS4 and see if it’s as good…or difficult…as the game that made the Konami Code famous.

The year is A.D. 21XX.  A war had taken place decades ago between humans and machines and it didn't go well for humanity.  Now it’s up to the last resistance fighter Mavra and her partner Doyle (a deadly insurgent robot who turned against the other machines) to wipe out the machines as they’re the last hope for humanity.  The game has a couple of modes you can play but the only one unlocked at the start is Arcade Mode.  There are also a total of four playable characters but only two Mavra and Doyle are available from the start (or you and a friend can team up in co-op play and use both).  Each one plays roughly the same so pick whoever you like.  The game has six missions and you can tackle the first four in any order which is pretty nice.  During my first trip through the game I had issues on a couple of stages and it was nice to be able to just go to another one and come back to the ones I was stuck on.  Each stage consists of a few sections typically with a mid-boss at the end until you hit the main boss of the level.  Defeating a mid-boss lets you move onto the next area and beating the main boss completes the stage.  After that you pick the next stage and repeat.

You start out with just your normal gun that will auto-fire when the button is held down and can be fired in any of eight directions.  In each stage you’ll come across boxes that have various power-ups inside.  Some of these will be one of three weapons: a pink whip-type weapon, a grenade, and a laser.  The whip just extends out a set length and you can wave it around to damage anything it touches, the grenade sends out a grenade that explodes with a decent blast radius (useful for bosses and mid-bosses), and the laser fires out a small laser unless you charge it up and release, in which case it fires off a large laser blast that stays on screen for a moment.  These weapons do take some getting used to and each are best in specific situations, and you can swap between them on the fly, but there’s a catch: if you’re using a weapon other than the default blaster and you die, you lose whatever weapon you were using at the time.  You’ll also obtain three different add-ons to help you out: an attack bot that fires when you do, a defense bot that basically gives you two hit points, and a speed bot that makes you move quicker and gives you a double jump.  However, you can only have one of the three bots at a time; obtaining a second one will make you drop the first one. 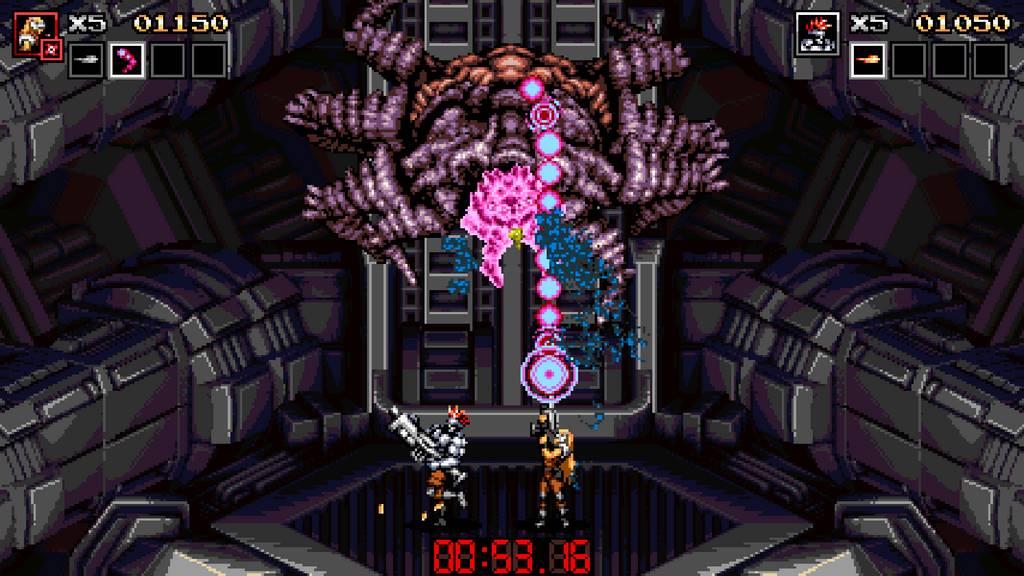 The controls are fluid and responsive which is nice given the fact you’ll be constantly under enemy fire.  Aside from the normal movement and firing controls you’d come to expect from a game like this, you also have the ability to do a dodge roll on the ground.  At first I didn’t use the roll too much but it turns out its imperative to get used to as the game progresses, especially during boss fights where you want to get in as many hits as possible before rolling out of the way.  You can also perform a melee attack, but the enemy has to be within close range when you press the attack button.  It’s useful when in a tight spot and there’s even achievements for defeating a boss with a melee attack and using it to reflect certain projectiles.  In terms of physical and audible presentation, the graphics remind me of Contra III on the Super NES and the soundtrack sounds like it could have been taken straight from a new 16-bit Contra.

Since Blazing Chrome takes inspiration from Contra you probably think the game can be somewhat difficult…and you’d be right.  You have three difficulties available from the start with a fourth Hardcore difficulty unlockable.  The easier the difficulty the weaker the enemies and the more lives you start with…which honestly you’d think that would be the opposite (more lives to deal with harder enemies).  However, outside of the lives difference and one or two other minor things the difference in difficulty isn’t that great between Easy and Normal, at least not from what I could tell.  I started out on Normal difficulty and it took several tries to finish the first mission.  I then tried each of the other three missions several times and just could not complete them.  That being said I restarted the game on Easy and I mopped the floor with the first mission and finished the second one without too many issues.  However, I do have to credit one thing in Blazing Chrome that at least the earlier Contra games didn’t have: checkpoints. 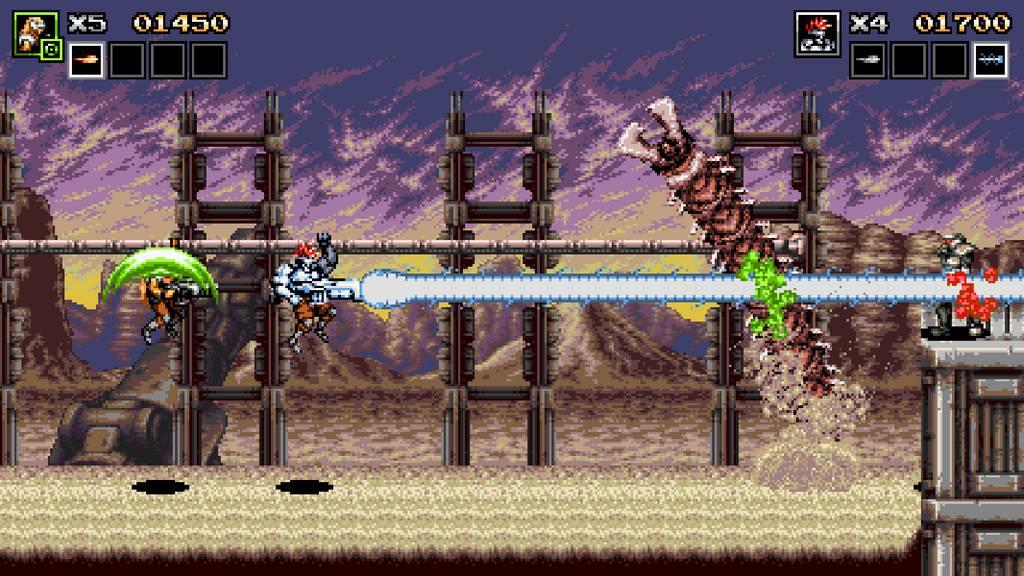 The game kind of has an auto-save feature where you can exit the game and pick up where you left off with however many lives you had when you stopped.  That alone is nice, but Blazing Chrome goes one step further.  I mentioned that at the end of each section of a stage you might find a mid-boss.  Once you complete a section you basically hit a checkpoint and if you get a game over, you’ll just restart at that checkpoint provided you don’t exit the game entirely (otherwise you’ll have to start the stage over from scratch).  While this may make the game seem a bit too easy for some players as a game over doesn’t mean having to do the entire stage over again, I personally love this feature as it means I won’t have to completely lose my mind every time I get a game over and I can actually make some progress in the game.  That said, while the main stages could get tedious and overwhelming, the boss fights for the most part are really fun.  They’re typically pattern based but once you understand the patterns, a tedious fight can become really enjoyable and exciting.

Blazing Chrome is a great game and, despite its difficulties and how bad I was at the game when I started, I really enjoyed going through it.  The weapons you can grab are unique in how they function and they have their different uses, the controls feel nice and fluid, the graphics and sound are great and really feel like an old-school Contra game, and you can play co-op with a friend for that true Contra feel.  Sadly there is no “Konami Code” from what I can tell, though if they did put one in somehow that would just be awesome.  My only real qualm is with the difficulty.  I mentioned that I flew through the first two missions on Easy, but that was also in part having already done them on Normal.  There is some difference in the strength of the enemies on Easy and the bosses do go down easier, but again, you’d think that you’d get more lives on the harder difficulty than the easier one.  However, that doesn’t hurt the game that much and if you’re into older games such as Contra, definitely give Blazing Chrome a shot.

Blazing Chrome is a great throwback to games such as Contra; simple run-and-guns with swarms of enemies, awesome boss fights, special weapons, and a great soundtrack to go with it.  With fluid controls, multiple difficulties, and a stage select so you can pick which stage to tackle in any order, Blazing Chrome is definitely worth picking up if you’re into Contra-style games.