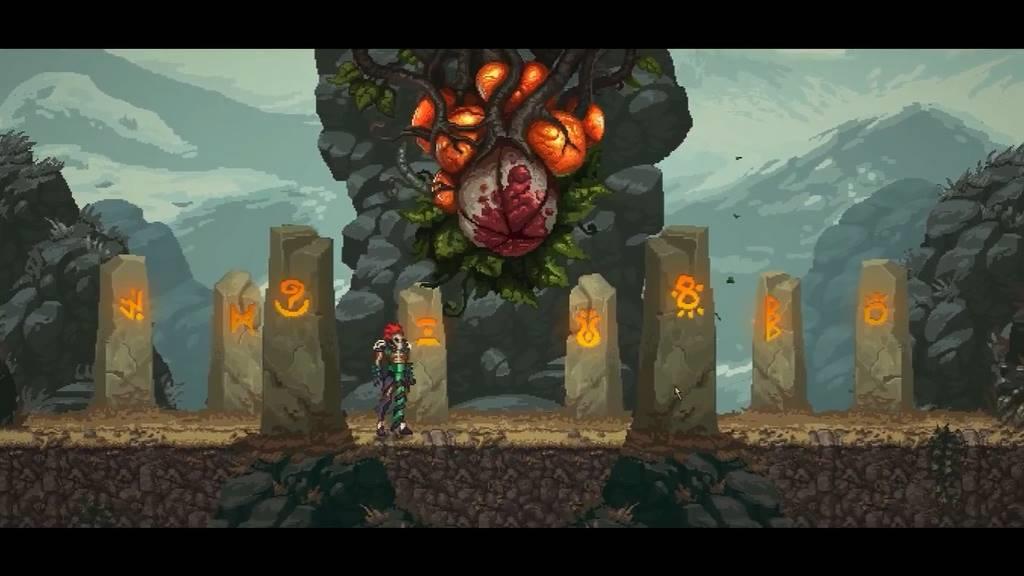 When you begin a new game you can choose from five characters, each with their own spells, abilities, and stats.  After that you get a tutorial area where a shaman speaks to you after you’ve been captured and put in a cage.  He breaks you out of the cage and you decide to get your revenge on your captors by running up to them and blasting them with your magic.  This actually serves as a decent tutorial for how combat works and, I’m not going to lie, takes some getting used to.  Instead of just firing off your spell whichever direction you’re facing, you can use the right control stick to aim your spell in any direction (if you don’t aim, you’ll fire either left or right depending on which way you’re facing).  This is what takes some getting used to as some attacks, while basically moving in a straight line, don’t really go from point A to point B and they all have a limited range.  It’s easier to see it in action than to try and describe it.  You can also hit Y to auto-target the nearest enemy, but even still your projectiles can’t go through walls and floors, so it can still be tricky to hit something that’s above or below you (you have to hold Y for a couple of seconds to deactivate targeting).

Much like any RPG-style game progression is done through quests.  Besides the main quests you’ll also find the occasional side-quest for some extra rewards and they’re usually simple enough that you’ll end up completing them as you do your main quest, though sometimes you will have to backtrack to a prior area.  Your main hub area is more like a main “pub” area…because it’s a pub.  I’ll get more into the game’s writing in a moment but you’ll talk to the bartender to buy and sell items and the fireplace is your method of transportation to the game’s various areas.  While in an area you can hold X to teleport back to the hub incase you need to sell any loot you’ve found or you need to buy some healing items.  You can equip several pieces of armor/weapons at once to increase your stats and you can have up to four different items equipped to the D-pad for easier access such as healing items.  Lots and lots of healing items because you’ll need them. 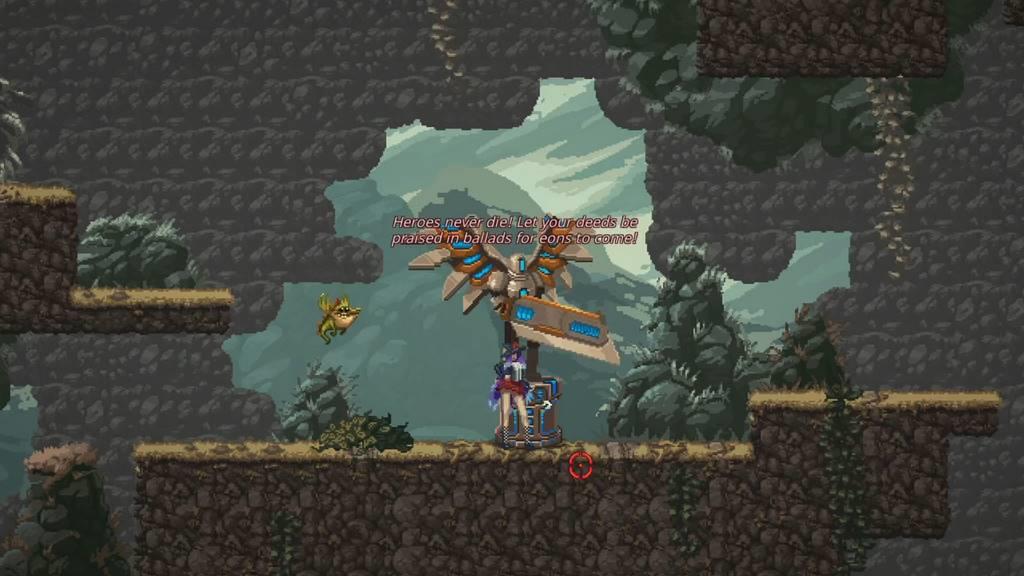 As you defeat enemies you’ll gain experience and begin to level up.  Leveling up gives you LP which you can spend on new abilities and upgrades.  Planning these out in advance is kind of essential because this game can get pretty difficult in the early going.  Even in the early areas you’ll face multiple enemies in a group that can drain your health rather quickly.  Very early on I had to grind for a bit to upgrade my primary attack and gain a couple of new abilities, and even then that wasn’t necessarily enough.  The upgrades can be fairly helpful though as they can have various effects such as stunning enemies, hitting several enemies in a row for small amounts of damage, or assist in dodging enemy attacks.  That being said though, combat is probably my least favorite thing about this game.

I mentioned that you can aim your attack in any direction with the right stick.  That actually makes for some pretty hectic combat, but the difficulty just compounds things further.  On top of that, it’s not uncommon for multiple enemies to attack you at once and quite a few of them have projectiles including arrows and acid balls, the latter of which can poison you for a few moments.  All of this combined makes it really difficult and almost suicidal to try and take enemies head on as damage can add up fast as there’s essentially no invulnerability period after you’re hit.  A good chunk of my time towards the start was trying to lure enemies one or two at a time, getting to a higher ledge they couldn’t reach me at, locking on, and firing when I could hit them.  This worked but it pretty much slowed things down to a crawl.  What makes this worse is that this was on Normal difficulty which is the lowest difficulty the game has.  I can’t even imagine trying this on Hard or even Permadeath.  Thankfully you can play with up to four players total via local co-op (sadly the Switch version has no online play) which should help with the difficulty of the combat quite a bit. 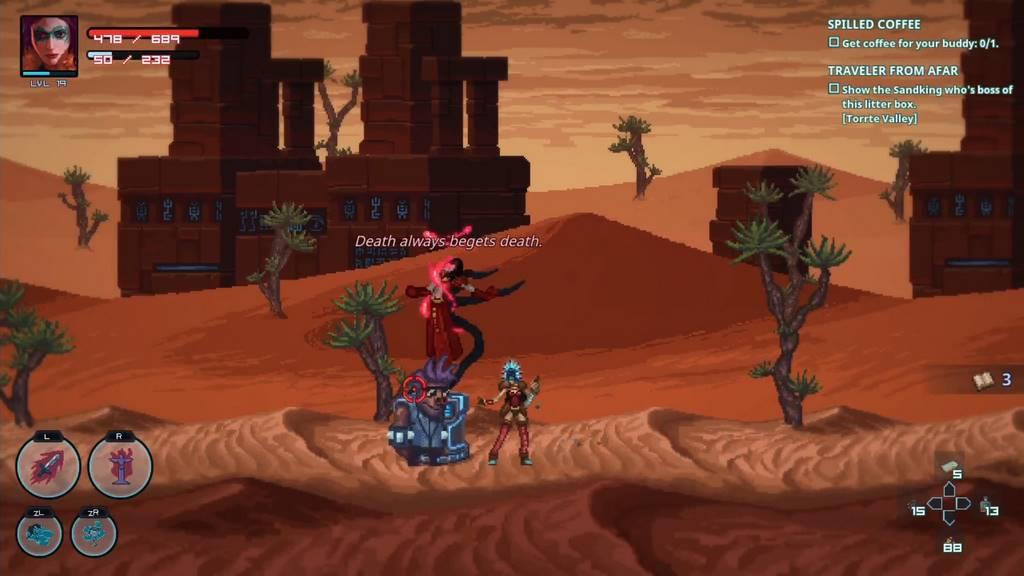 The combat wasn’t the only low point for me as there were some performance issues I kept seeing throughout my time with the game.  While they weren’t anything major they were certainly noticeable.  Every so often the game would freeze for a quick moment as if to load part of the area into memory.  This would tend to happen just before a group of enemies would attack you and it can throw you off a bit if you’re not expecting it.  However, this was more of a minor nuance for me as it’s not like the game slows down or lags, at least not that I noticed.

That doesn’t mean the game is downright terrible; it’s still fun to play and I do enjoy it when I’m not getting slaughtered by mobs of enemies.  As I said earlier the writing is pretty good and downright humorous at times.  I already mentioned the main pub and teleporting via fireplace, but the NPC dialog and even the spells and abilities themselves lean on the humorous side.  For instance, one character fires a phoenix at his opponents as his main attack and can ride on a cloud for a moment to dodge enemy attacks.  Another throws two roses as her main attack, can smoke a cigarette to increase her damage as well as take a selfie to create a temporary duplicate of herself to lure enemy attacks and can also be used to reach higher platforms.  While the combat can be tedious and overly difficult at times, the writing and rest of the gameplay tends to make up for some of it. 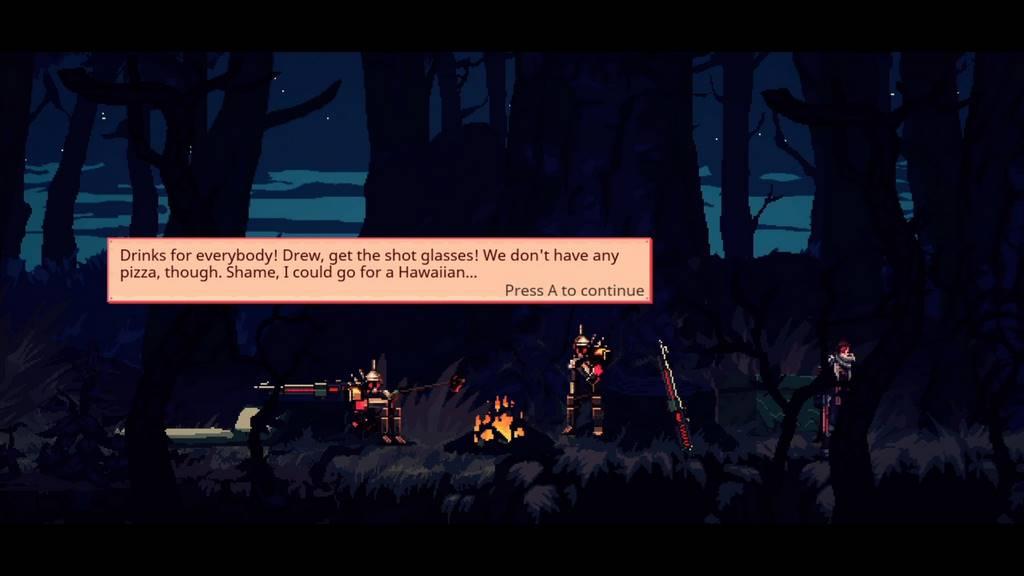 Warlocks 2: Godslayers isn’t a bad game by any means, but it can be pretty difficult early on.  I spent a lot of time just getting through the first several areas through a combination of picking off enemies one by one and getting slaughtered by a mob of enemies and having to redo part of the quest I was on.  Thankfully you can grind enemies if you need to level up a bit, though that doesn’t negate a lot of the tedium of the early going.  If you have some friends to play with it should help make things a bit easier on you, though there still might be the occasional grind session.  The occasional quick freezing while something loads in the distance isn’t a huge deterrent, but is something I wouldn’t expect to be in a game like this.  For the base price of eighteen dollars it’s not too bad of a deal, but you might want to wait for it to go on sale a bit.  A fun game but it could have used a bit more polish.

Warlocks 2: Godslayers is enjoyable for the most part, but the difficult and tedious combat can take the fun out of the game for some people.  The game is definitely geared for multiplayer as the combat can be overwhelming during solo play.  Beyond that there are a few minor performance hiccups though it doesn’t normally affect any major gameplay.  If you can get past that and the difficult-at-times combat, you’ll find an enjoyable and humorous game with some interesting gameplay mechanics and even more interesting writing.