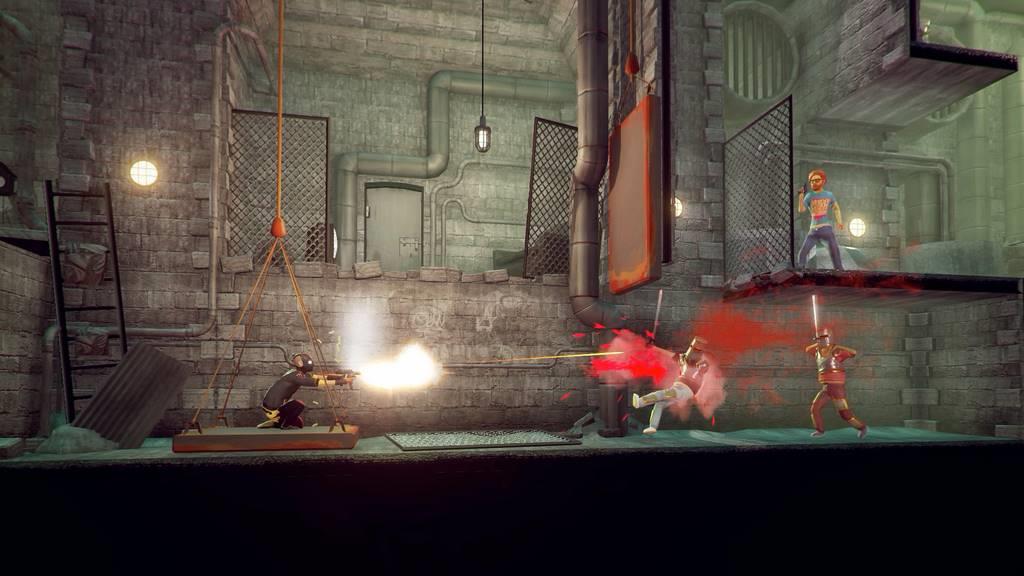 My Friend Pedro, a game that I have been waiting for since last year, is finally out.  The game is a sidescrolling shooter that combines platforming, bullet hell, flashy acrobatics, and just a whole lot of fun, it emphasizes new ways to implement gameplay elements with a light dusting of story, character, and motivation throughout. It is a crazy adventure, packed with a bit of the old-fashioned ultraviolence, and a good bit of humor.

Players control an unnamed protagonist who, with the help of a sentient, floating banana named Pedro, fights their way through a futuristic, criminally infested hellscape.

The game gives players different ways of dealing with these tough guys. Acrobatics (essentially jumping), the unique ability to dodge bullets by spinning, shooting akimbo, and bullet time round out the special moves, which players will use frequently and interchangeably throughout the game. The arsenal is equally numerous: sub machine guns, pistols, shotgun, an assault rifle with a grenade launcher attachment, and a sniper rifle. The abilities are available to the player from the get go, but the guns take an appreciably slow time to unlock in full. 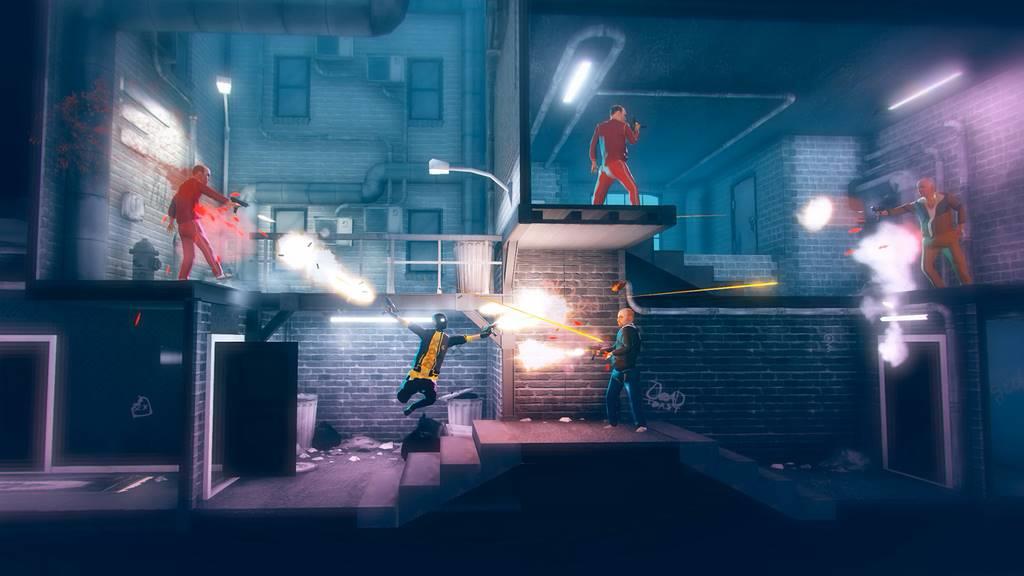 In addition to the enemies and weapons, the environments also receive upgrades throughout the game. From a meatpacking plant in the beginning, to abandoned sets of buildings, to sewers and fantasy lands, the setting plays into the gameplay as much as the guns do.

That’s the unique thing about My Friend Pedro: just how much game there is. The momentum of the game carries through by the simple mode of moving forward. The obstacles, whether human enemies, robot turrets, electric mines, or anything else, must be surpassed, and while there is always a set path with which to accomplish this, it is always a fresh and energetic experience.

One way in which the game makes itself so unique is how much inspiration it takes from other games and game subgenres. The game I would most liken this to is Max Payne 3, a personal favorite of mine. The platforming and acrobatics are among some of the oldest traditions in gaming, so that should speak for itself as to its inspiration. In sum, the game does a great job of combining the old and the new. 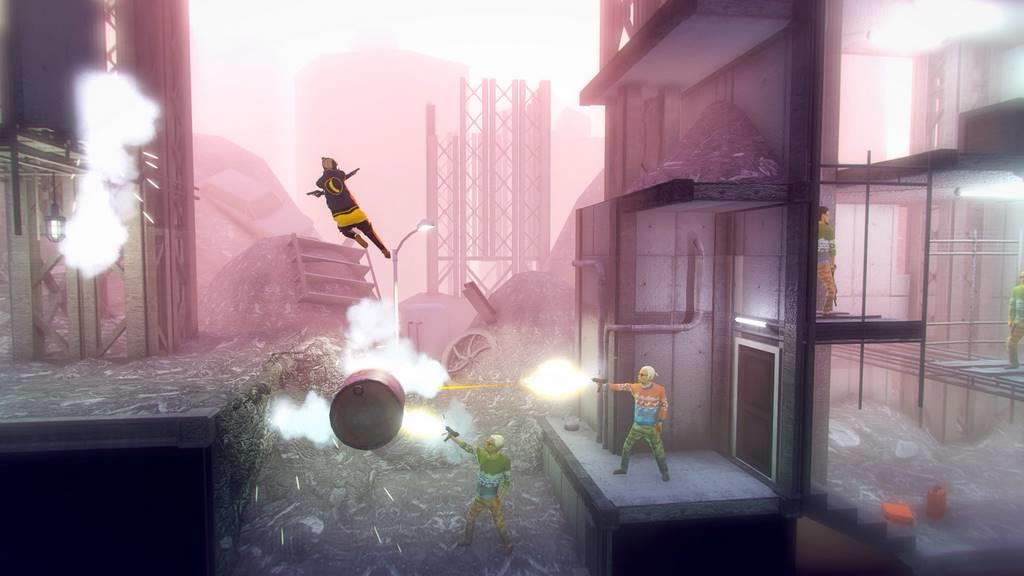 What is great and frustrating about this set pathway is the grading system that accompanies each level. The highest grade I made was an A, but mostly I got Cs. Anywhere from C for Coconut, or Careless, or Could Do Better. It is humorous, and provides an incentive for players to come back. But needless to say I died a few times, but so did all the enemies I killed.

If there is one thing I was frustrated with, it is that the game’s rigid structure can lead to repetitive gameplay that threatens to not hold up for the duration of the game. Whether it is dying over and over as a result of a particularly tough group of enemies, the fact that there is usually just one way for the player to get to where they need to go shows that the game does have flaws. 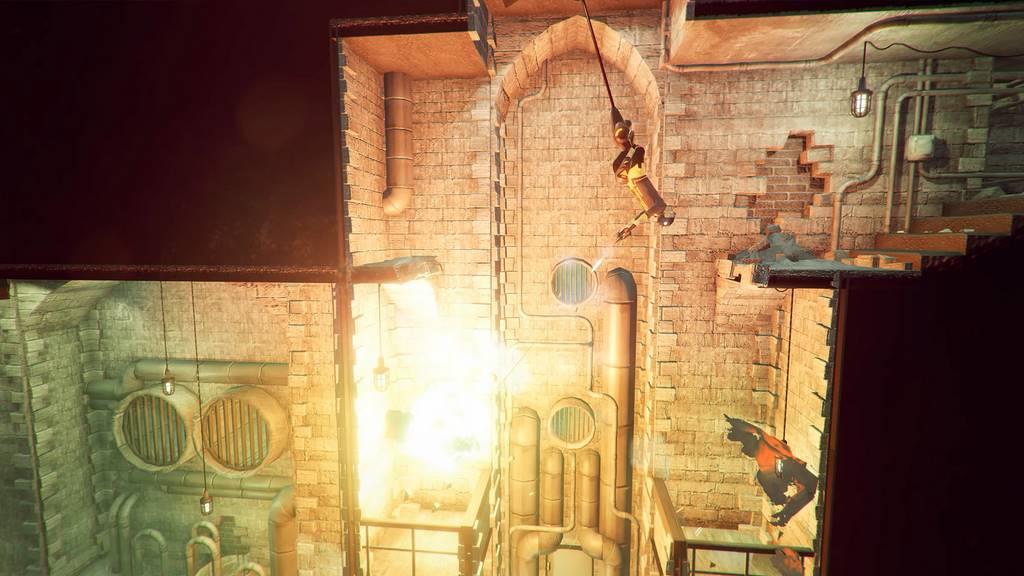 An example of this: at one point, late in the game, I had to traverse a room by jumping down from a platform on the left side, going slow motion and shooting a wooden box to pieces so that I would have the chance to jump up on the next platform, then wall jumping onto a rope that pulled me to the ceiling. Half of that done, I then had to hold down the W key to keep a dodge going, because a sniper sat stationary, his laser trailing my every move. By the time the rope had pulled me to the top, I jumped onto a hook that slid me back to the left side of the room, above my starting point, where I angled a shot at a lever that would open a door, allowing me to open a way behind the sniper, flanking him, and finally gunning him down. I hopefully described this process clear enough, and if so, then it should be doubly clear how efficient and simple it can be to traverse the game world. But sometimes, you might not be able to shoot that box to pieces in time, or you may try to overshoot it, only to fail, get shot, and have to start the same path again. It doesn’t too bad, but when you have to do same thing over and over, it can get annoying.

That leaves the story. The beats, which are few and far between are mostly tied to boss fights, the player needs to get out of the hairy situations they keep finding themselves in. It’s an efficient way to tie into the gameplay and its momentum. From the start, the player is stuck in a bad place full of bad guys with guns, and has to shoot their way out. Pedro the banana provides the informational context that gets the player where they need to go, essentially pointing us to the next bad guy over at Point B. This might seem like a cliché way to get the player where they need to go, and that is simply because it is. But the game is too fun for me to care, and I’m grateful for it. While I don’t want to get into spoilers, it does help that the game’s subversive tone threads its way into themes that confront what it means to control vs. what it means to be controlled, video game violence, and censorship. This all helps to play into both the narrative and the game world. Those references are subtle, and can generally be found throughout the setting, adding a layer to everything, sprinkling a little complexity for good measure.

There is so much and so little to My Friend Pedro all at once. To quote Reggie Phils-Aime: “The game is fun”.

My Friend Pedro, packing a punch, a kick, and quite a few guns, is a breath of fresh air in the shooter genre. While it runs the risk of becoming samey, though, it always manages to give the player something new.