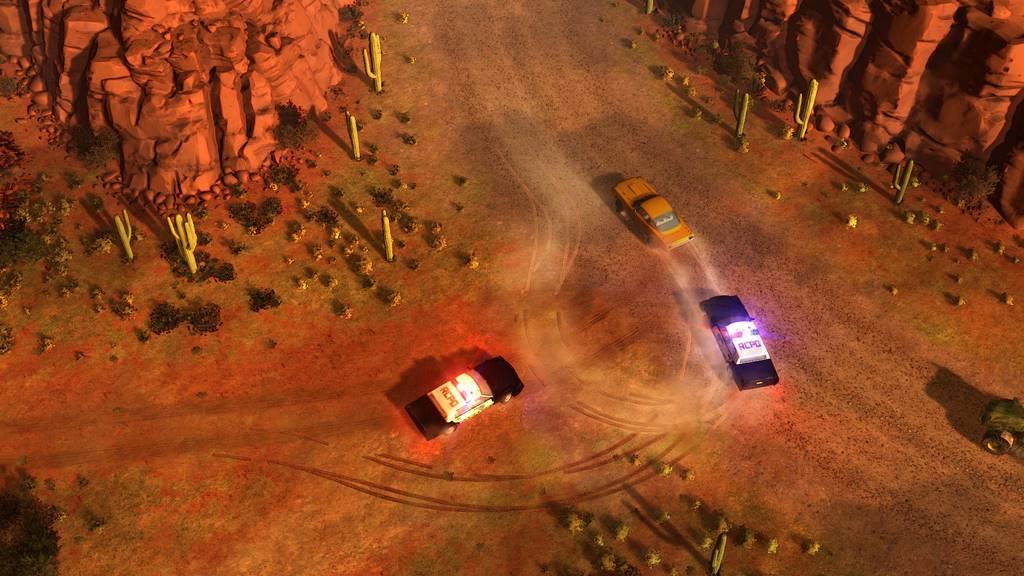 Written by Nicholas Leon on 6/6/2019 for PC
More On: American Fugitive

Narratively ambitious in its scope, but hollow in its execution, American Fugitive is a game I can appreciate. Following the criminal misadventures of Will Riley, a cunning thief who, after being framed for his own father’s murder, goes on a long, sometimes overly tedious hunt to find the identity of the real killer.

Because the game is viewed from the top down, and is a crime game, much can be made of the game’s overt resemblance to old-school Grand Theft Auto, including the more recent Chinatown Wars.

But, perhaps because of the game’s limited scope or its status as an indie, it doesn’t necessarily ascend to the level of its biggest inspiration. For the record, I don’t know whether it was the devs’ plan to model the game after old-school GTA games, but the fact of the matter is that the game resembles it, and so it will be compared to it.

One way in which it can’t immediately be compared is the game’s visuals. Utilizing a bright, colorful aesthetic, American Fugitive’s world never gets too stale to look at. Taking place in Redrock County in the 80’s, it’s a story of lies and crime in the American South. With more natural scenery than concrete jungle, it’s a refreshingly diverse setting that feels lived in, which goes a long way towards making the world feel all the more real. 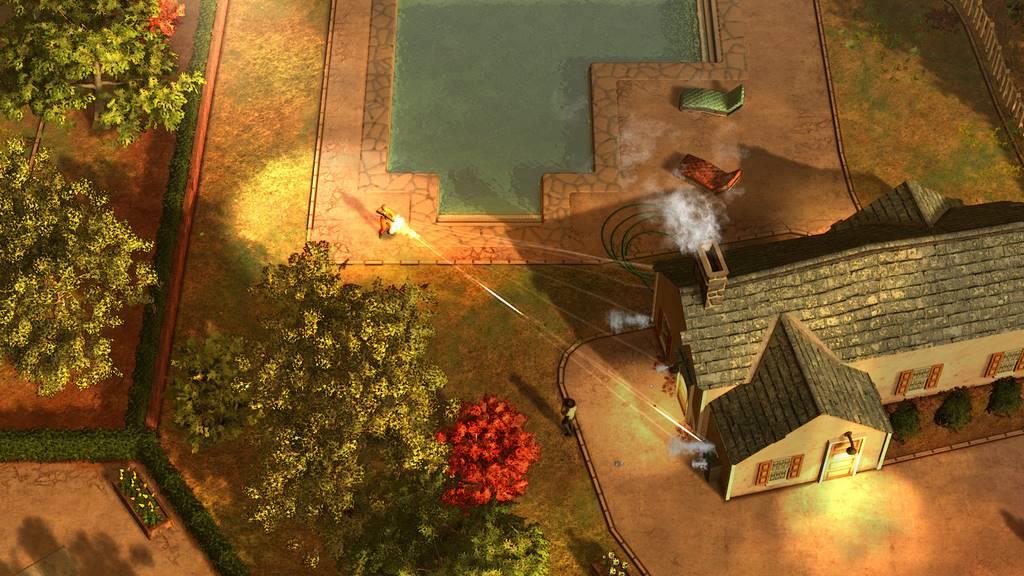 Combining carjacking, freewheeling, burglary and robbery minigames, melee and gunplay, American Fugitive’s gameplay variety is tantamount to its success. The game world, small at first, blossoms throughout the story, and Will needs everything he can get his hands on, mostly through illegal means, so he can accomplish his goal. So to do that, there’s more than a fair share of house burglaries and armed robberies of any store in the game to go around. Players can case houses, finding easy ways to break in, and then will have a limited amount of time to steal all they can from the house before the authorities get there. But sometimes, while you’re casing, you run across the homeowner and just happen to knock them unconscious, you might find something that helps in your venture. This can be a key that helps you break into the house undetected, thus negating the cops coming to bust you. If you break into a place and the homeowner is there, however, you will have the option of restraining, attacking, or releasing them. This plays out the same in store robberies, except you have that restrain/attack/release option from the beginning, and only then will you be able to rob the whole place.

In addition, you can steal cool cars, try to nail stunt jumps, and maybe do some time trials. Outside of the main story, there isn’t a whole lot of engagement with enemy criminal types, at least in my experience with the game. It’s an unfortunate detail left out of that experience, because what players get in the main story is so fun.

The gunplay and car mechanics here, while nothing fancy, is probably the best part of the game. Enemies will press you, the cops will chase you, and you have to find your own way to outflank or outrun. Plays have access to police specials, rifles, sub machine guns and assault rifles. Throughout Will’s story, players encounter numerous gangland enemies, ranging from the mob, to corrupt politicians, and country boys who made the wrong move in trying to cross Will’s path.

When players are actually doing something, for example engaging these enemies, it’s really fun. Dodging bullets, hiding behind cars, and then having to run when they’re about to blow from all the gunfire they’ve absorbed, is exhilarating. Finishing off the shootouts with well-timed and well-aimed gunplay elicits the same feeling.

Rounding out the gameplay elements most pertinent to the story are the cars. Varied in all the right ways, vehicles have a real weight to them that makes each and every one of them unique and satisfying to drive. Muscle cars, sports cars, vans, station wagons, even tow trucks and buggies all have their own advantages and disadvantages, leading to a driving experiences with whichever vehicle a player chooses. 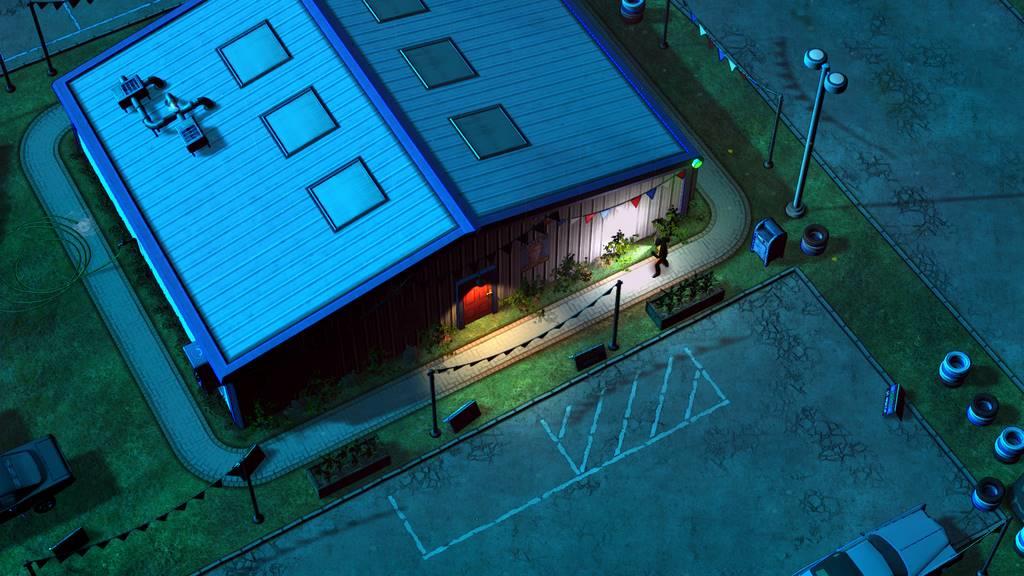 The freshness, however, doesn’t last so long with the game’s story. Although it has a fresh start, bringing the player into the story with an emotional hook, it soon gets bogged down in repetitive and rote tasks. Sure, there are many times when players can engage in fierce and exciting shootouts, but there are more times when players are simply going out on errands, retrieving this or that item, than there are moments in which the story is progressing in interesting ways. The narrative becomes very much a “you do this and this and this for me, and then maybe I’ll give you something, but only after you do that and that and that.” It’s rote. And I lost patience for it before the first act was up. But much to my disappointment, the game kept it up through the second and third.

Although the story on the whole is lackluster, there are definitely moments in which its shines. But while I can’t divulge those moments, because that would be spoiling things, I can use that as a springboard with which to analyze how the game succeeds in some ways and falls flat in others.

American Fugitive is good in spots. And those spots are fun. But on the whole, the game just barely keeps up with its own scope of ambition. The story is okay, and the shootouts and car chases are some fun stuff, but the game got so repetitive at points that I stopped caring after a while. That’s not a good thing when a story has three acts to get through. I’m genuinely surprised and thankful that so much activity is packed into the game, but it’s a disappointment that its only purpose seems to be a padding out of the time spent with the game. And that’s a shame, because with the things to do that are actually fun, I find that to be a lot of time well spent.

American Fugitive is good in spots. And those spots are fun. But on the whole, the game just barely keeps up with its own scope of ambition.