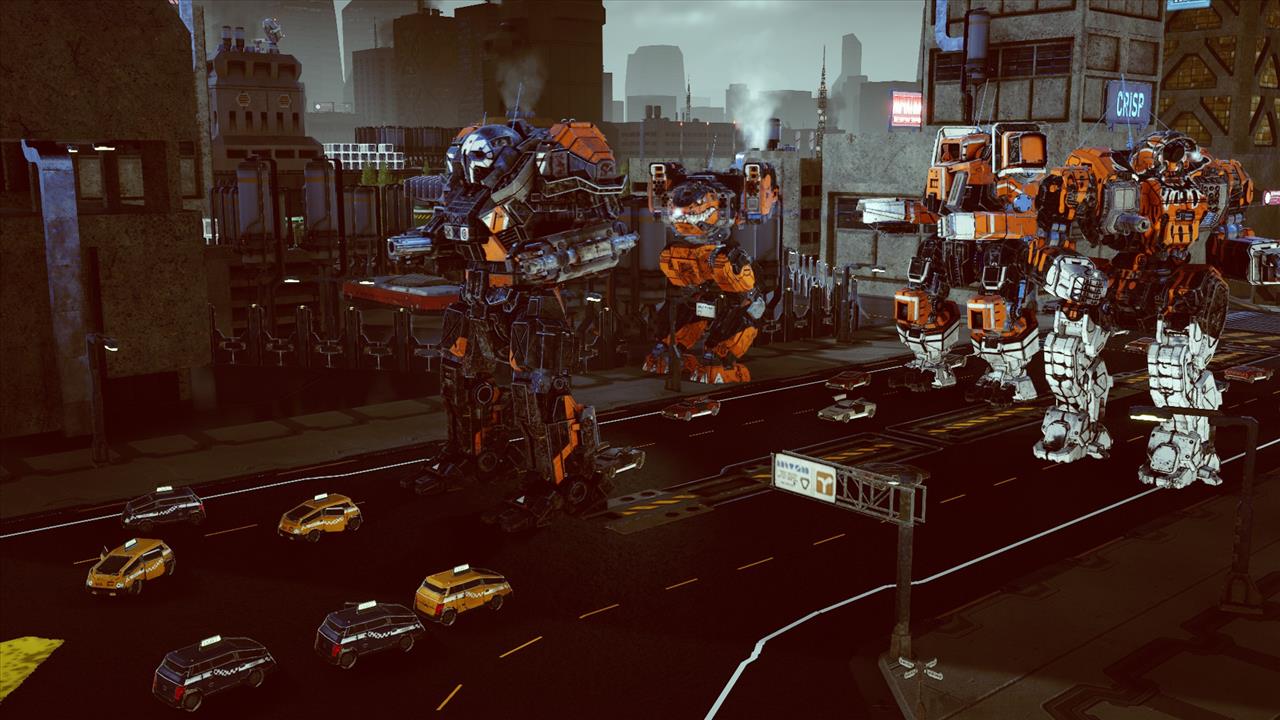 Urban Warfare is drastic. At first, anyway. It introduces, with a firm handshake, the biggest change to BattleTech’s area of operations so far. BattleTech has been hot, cold, temperate, and lunar. It’s given you jobs on dusty martian landscapes, icy blizzard landscapes, and even steamy jungle landscapes (if you bought the Flashpoint DLC). Yes, developer Harebrained Schemes ground a little pepper onto the algorithms making steeper hills and deeper valleys during a past free update. But nothing changes up the battlefield quite like the Urban Warfare DLC does.

At least visually. In the city, it’s still a game of inches. Just like it is out in the wild. You’re angling your battlemechs for this flank attack or that rear ambush. You’re grabbing an increased shot percentage from higher ground or finding ways to cool your jets. One hexagon closer or further away can make all the difference in sensor locking a primary target, a caravan giving you the slip, or bringing your short, medium, or long-range weaponry to bear in a guns-blazing alpha strike. In Urban Warfare, it just looks a little different while you’re doing those same things.

Welcome to the city. With its city lights, city streets, and city infrastructure, you won’t confuse this type of arena for any other. The city is fragile, though. It’s tempting and necessary to mount an office building or two while you’re in town. But large civilian and corporate buildings have only 100 hit points. Most buildings have fewer. A couple directed shots, or even a couple stray shots, will bring down a building real quick. The destruction can be as casual or as callous as you make it out to be. There are no repercussions, however, for any wanton destruction of public or private property. It’s just part of the cost of doing business when you’re a business in the city—and 100-ton mechs have slammed down on 5th Avenue. 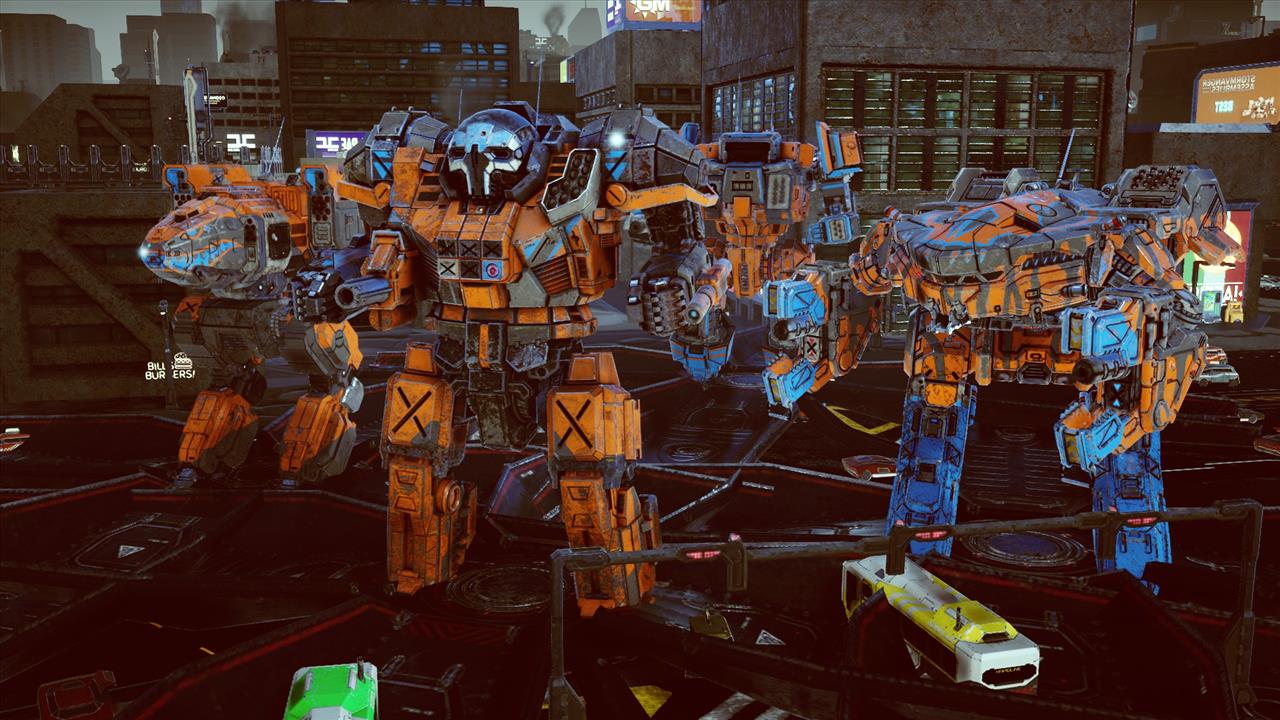 First thing you have to do is find these urban locations. Thank you, BattleTech, for improving the navigation map. There are a couple new features. Two dropdown menus now filter results across the entirety of the map. Filtering by difficulty narrows your results nicely, whether you want nasty five-skull missions, or if you want to buff up a greenhorn crew in a light lance with only half a skull’s worth of challenge.

The other dropdown menu filters by environment: jungle, lunar, urban etc. Also, it sticks a sort of pin on the map on all the star systems you’ve previously visited. Neat feature. I also feel like there are a few more pulsing lights and navigation baubles on the desk. A computer screen scrolls through monochromatic text behind Navigator Sumire. Just a small increase in attention-to-detail for your base ship’s interior. It’s appreciated, considering how (appropriately) drab the Argo can be. 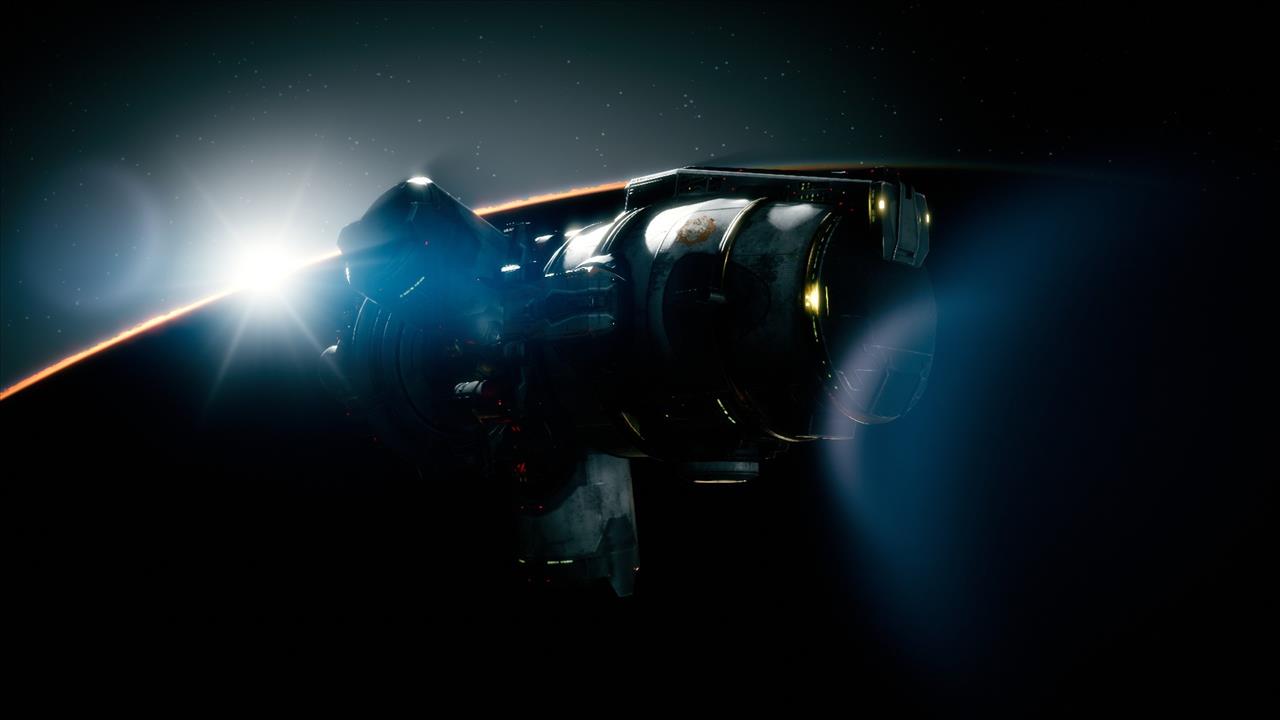 I sure didn’t miss these long, stiff loading screens, though. I haven’t timed them. They might not be getting longer. But they sure aren’t getting shorter.

I burn a month on the books (time is always money) flying across the Inner Sphere, back to friendlier skies. And then it opens up for me. Five contracts are available. Three of them designated “urban.” We head for the mech bay immediately. I would rather field four light or medium mechs with jump jet capabilities. But this is still predicted to be a five-skull battle, so I have to field my heaviest-possible assault mechs. I don’t have a choice. If this game were a fresh start, I’d be hopping in with lighter-weight mechs. I’m too far beyond that point, however. Once you're fighting with the big boys, BattleTech still makes it nearly impossible to field your lightweights.

I like running with a mixed bag. I bring a 100-ton Atlas for pure intimidation factor. I pack a 90-ton Cyclops for fire support, a 90-ton Highlander for its monster jump jets and indirect fire capabilities, and an 85-ton Stalker for its bonkers amount of firepower. I love Stalkers. But who knows what I’ll really need down there? It’s fun going into a mission once again not knowing what to expect. Knowing what to expect, time after time, has been the only thing slowly dragging down my BattleTech experience. Urban Warfare changes that. 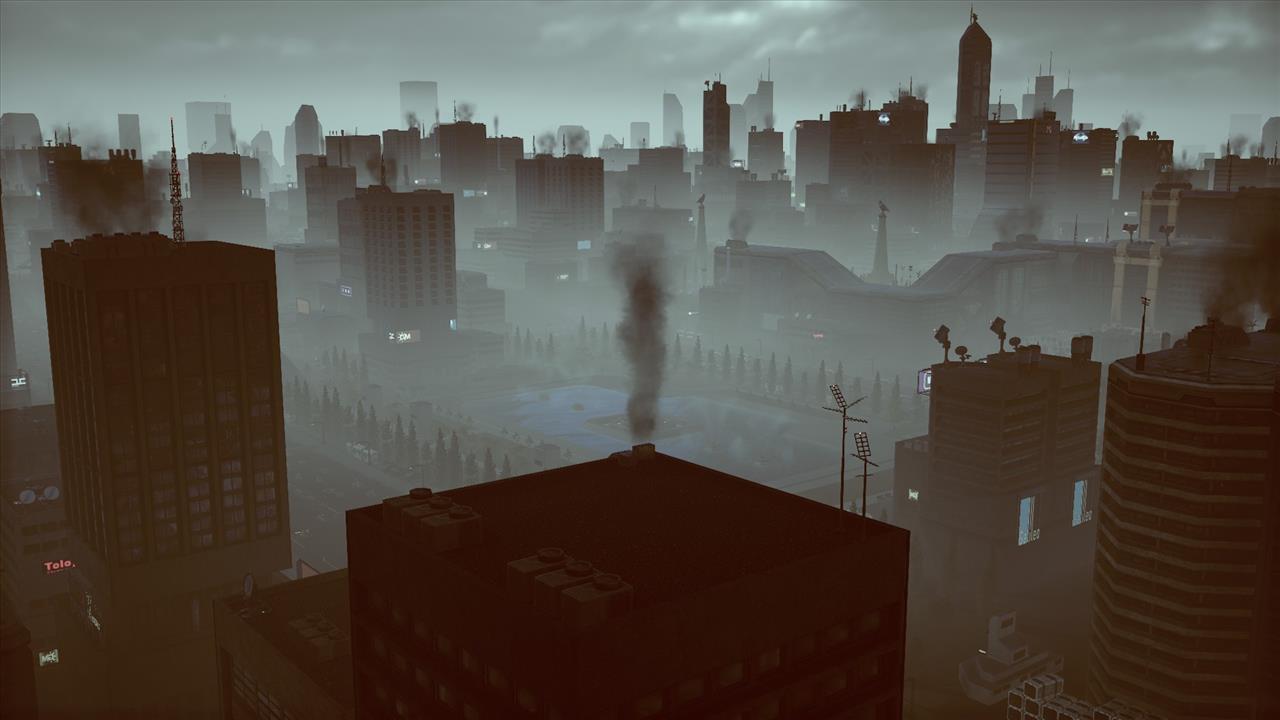 We touch down and it takes a minute for the frame rate to catch back up. It’s concrete, steel, and glass in every direction. The arena down here seems smaller, but that’s understandable, given how much more work it feels like the graphics are processing. There are signs everywhere. Pizza Place! (Call Now, Save Dough!) The streets are littered with abandoned vehicles. Yellow and blue taxi cabs. DeLoreans with their gull-wing doors up. Buses everywhere. Nothing moves. This section of the city was evacuated for these upcoming mech-related festivities, I presume. The abandoned vehicles explode in a puff of smoke as we stomp through the streets. We leave potholes in the asphalt.

Performance is choppy. Compared to the hills and forests of most other planets, these urban environments are taxing the heck out of that poor Unity Engine. Not to mention my PC. But there’s an impressive amount of new assets here. I thought cities would just be overgrown military bases with the same ol’ military base assets. Nope. This is all fresh. 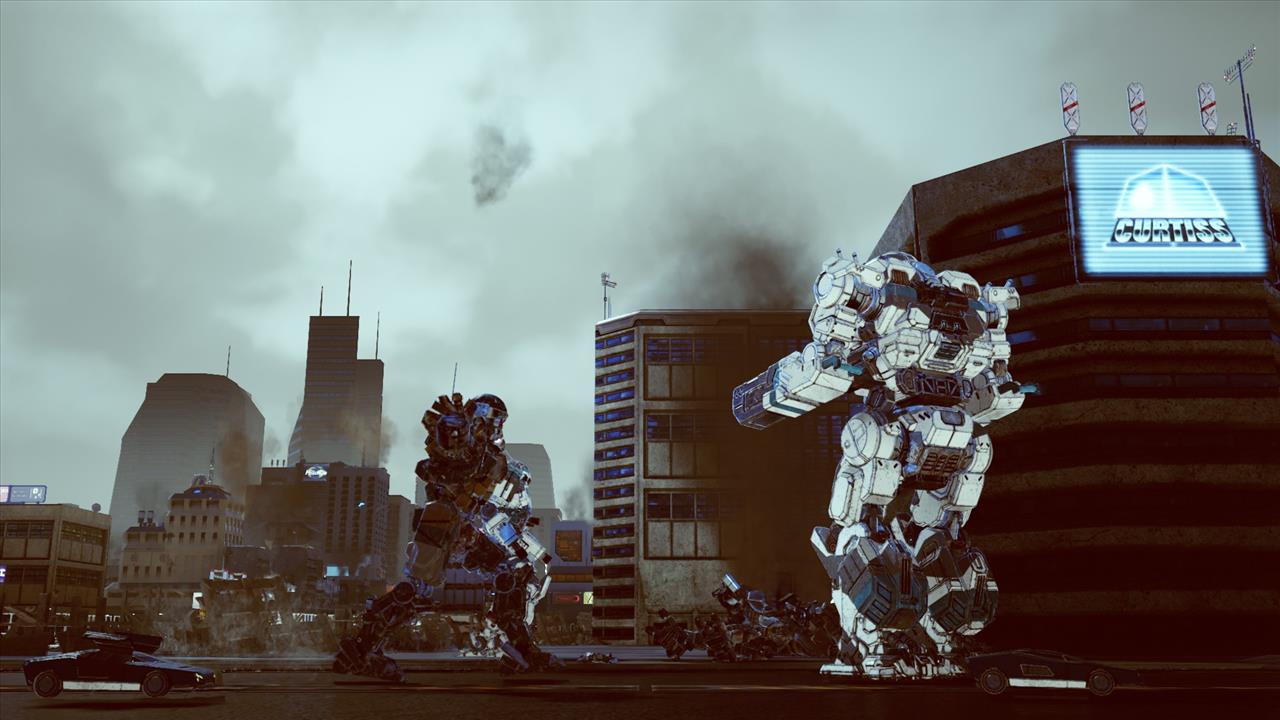 The scariest aspect of these buildings are their low hit points. You don’t want to be standing on top of one of these things when it gets blown out from under you. In a lightweight fight, the lower hit points would be ok. A full-on alpha strike from a light mech probably wouldn’t topple a building. But with heavy and assault mechs trudging around, that building is coming down and you won’t have time to hop to a safer place.

I finally see why the game added “Stray Shots” to the shooting results. Weapon fire doesn’t simply miss and fly off into empty space anymore. A stray shot will miss its primary target, but hit something nearby. A building, an explosive object, another mech.

I blew up some special structure that spilled coolant over a four or five-mech radius. Like a good-sized duck pond. Glad I didn’t actually hit the bad guys with that coolant explosion. I ran up and started reaping the benefits of increased heat venting. Sometimes you can cool off in a water fountain. Other times you have to make your own way to cool off. 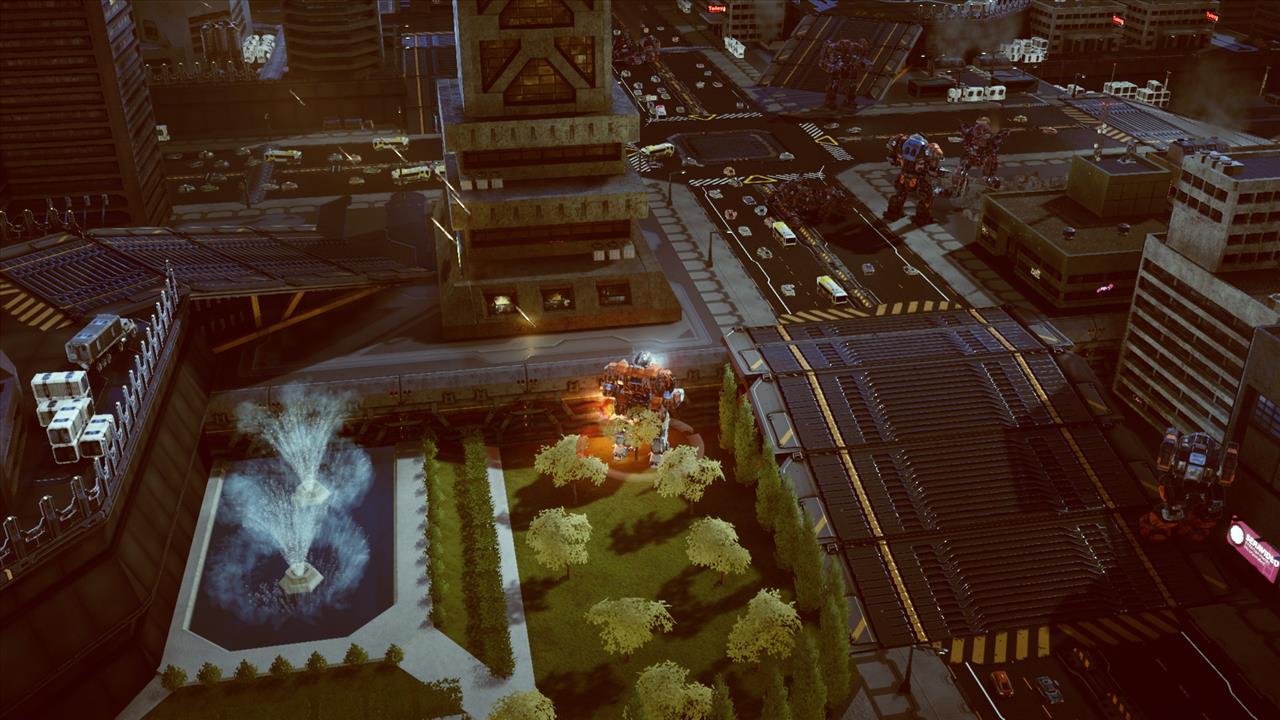 There are two new mechs. They are reportedly sprinkled throughout the galaxy, but I didn't encounter either of them because they're light mechs and top-level missions only roll with heavies. If you aren't in the early game, then the game isn't typically sending light mechs against you anyway. There's the Raven with an advanced electronic warfare package combining ECM and Active Probe systems. And there's the Javelin, a compromise between speed and firepower, with close-range knockout power. Again, in my weight class, I saw neither of these two new mechs brought into play. The Raven's X-1 EW Equipment, however, sounds like the only way to bolster a light mech's survivability when the big dogs are running around the yard. It provides an electronic countermeasures field that gives the Raven and nearby allies passive defense against missiles and immunity to indirect fire. That's pretty crazy, considering how many missiles are typically flying around the urban environment.

The Raven and its EW suite can be found in the newly added "Prototype" Flashpoint. It's the first Flashpoint you get when starting a new career, or it's inserted into the mix after finishing the storyline campaign side of things. If you're already several months deep into the campaign mode (having finished the storyline many, many hours ago) this new Flashpoint can slip right past you. Especially if you already have a dozen Flashpoints blinking at you on the map that you haven't attended to.

The urban environments themselves are very cool. They put a hefty spin on your usual tactics. But after a dozen Urban Warfare encounters, these contracts become part of the grind like any other.

Urban Warfare brings dynamic changes to the battlefield unlike anything before it. Those changes are surprising, challenging, and push the exploding, collapsing city in new directions. The graphics engine groans under the weight of urbanization. But the city is bright and beautiful.