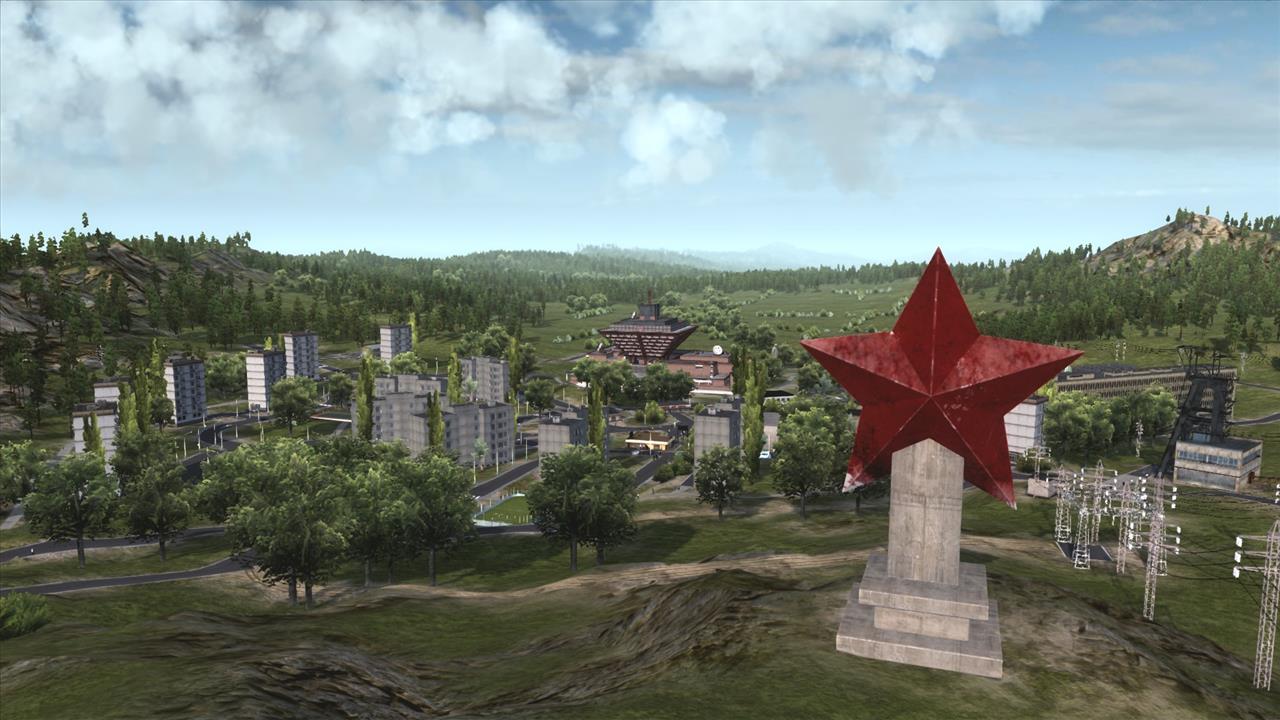 Written by Randy Kalista on 5/30/2019 for PC
More On: Workers & Resources: Soviet Republic

Meanwhile, in Russia, I watched my coal ore conveyor belts sidle down the rolling hills of Eastern Europe. That plucky Tetris-like tune popped up on the soundtrack when my construction office caught fire. The third-world immigrants I’d paid to populate a prefab block tower of housing were now watching my East German ladder truck slam into the side of the structure fire. It's still early access days. Plenty of bugs. There are still crashes to desktop every few hours.

Fire's out, though. Now I'm noticing the new school bus I put into action is picking up children and trying to drop them off at the Comrade Drinks Bar. I must've clicked the nondescript pub roof when I should've clicked the nondescript kindergarten roof during my initial setup of the bus route. I should probably fix that. I plant a couple more poplar trees behind a copper statue of Lenin. Just trying to brighten up my haze-gray communist urban planning that somehow saddled this small town with three coal plants crisscrossed with towering megawatt power lines.

Workers & Resources: Soviet Republic. It’s a mouthful of a title. It’s also a mouthful of a supply management sim. And logistics sim. And city builder sim. It’s like Factorio plus Transport Tycoon plus Cities: Skylines. Throw in tens of thousands of individual citizens all packing a Banished amount of wants and needs, and you’re in for a game with unmatched aspirations.

If that sounds daunting—then you have the right idea. This is the biggest sim I’ve ever played. I’m not going to lie: Without hours’ worth of tutorials already posted on YouTube for this early access game, I wouldn’t be in front of you today singing the praises of Soviet Republic. It’s not just rough around the edges, though. It’s rough throughout. Very finicky. Roads are difficult to route through steep terrain. Train semaphore signals are counterintuitive. Nothing communicates its wants and needs very clearly. And yes, it even crashes to desktop every few hours whether I want it to or not. But taking the time to learn Soviet Republic’s quirks has paid off. After a lot of (admittedly enthusiastic) digging, I’ve found one of my favorite games of the year.

Aside from being a monster of a resource management sim, Soviet Republic taught me some things about life in the 1960s, ‘70s, and ‘80s. Specifically in and around the USSR, the Union of Soviet Socialist Republics, where we get our name. It’s the Cold War. You play a fictional Soviet country; a 20km by 20km square country. To the west are the Eastern Bloc nations of Europe. To the east is the “Very Free People’s Republic,” e.g., Russia. Despite that snippet of dry humor—haha “Very Free”—Soviet Republic is as straightlaced as they come. The titular Workers & Resources are both just numbers. Workers are numbers that need things like food and clothing and don’t mind a little electricity if you have some to spare. And resources are numbers that let you play the Build A in Order to Build B in Order to Build C game.

You can look down from the clouds or follow automobiles on the ground. What you’re going to see is a lot of gray. Gray and brown. Gray from the prefab residential blocks. Brown from the conveyor belts hauling raw ores down from the hills. You’re going to see people that live where they work, and work where they live. You’re going to see a workforce that, with enough food, alcohol, and sports, will skyrocket in happiness, even as it becomes apparent that their spiritual needs will never be met by a communist government, and that you can never have enough pubs within walking distance of home, and that they’re only going to get only so much cultural enjoyment out of going to the movie theater. This becomes most apparent when you build a radio station. The sliders you adjust dictate things like anti-religious propaganda, pure entertainment, and preferences for alcohol.

But the meeting—and division—of East and West doesn’t end there. Specific makes and models of vehicles hail from either side. I love buying West Germany’s Mars309 for the striking blue color it lends to my drab streets. But I also love the Soviet Union’s PZ 672 because it’s school bus yellow but also has these three-quarter skylight windows. They’re cool. Also, the West has a few buses and harvesting equipment to choose from, but some years it’s slim pickings. 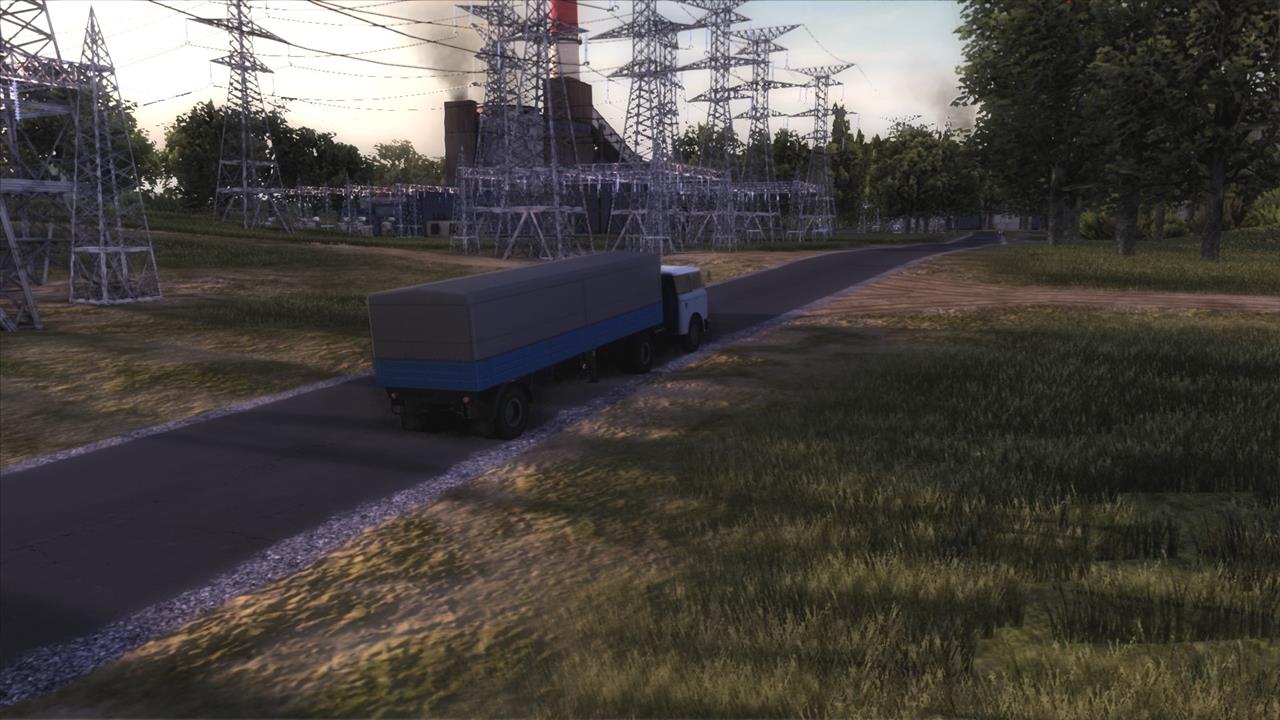 Which leads us to construction. Soviet Republic doesn’t have that huge roster of vehicles for nothing. You want to start a farm? That’s going to require tractors, harvesters, and some covered hull trucks that can haul crops. You want to transform raw crops into actual food that goes onto grocery store shelves? Well, build a grocery store within walking distance of some residential buildings, yes, but then also build a food factory, also within walking distance, or at least close to a bus and/or passenger train stop. Then get maybe a Czechoslovakian Skd 706 RTTN truck and trailer to make the rounds, loading food at the food factory, then unloading at the grocery store. Making too much food? Drive it out to a border station for export and start seeing those sweet, sweet dollars and rubles stack up. Food lines getting long again? Tweak the number of workers staffing the factories and grocery stores, or cinch up the amount of food that border truck takes on each trip. 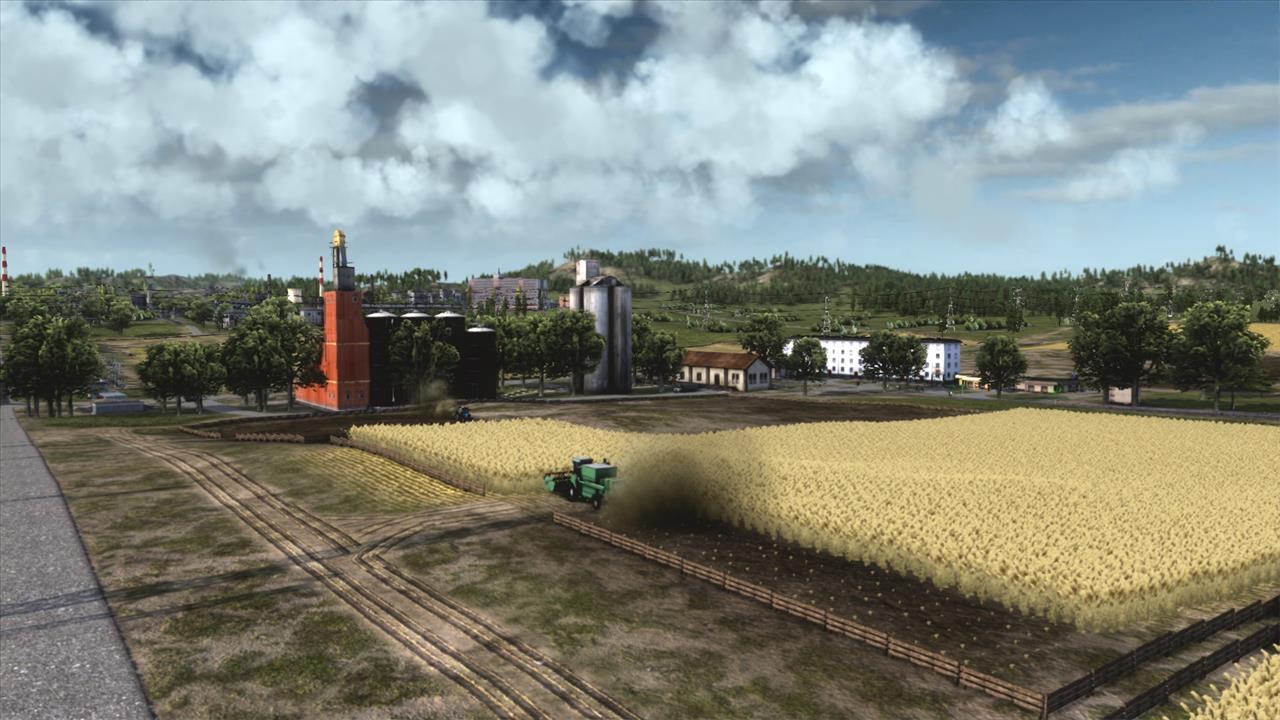 Whether you’re getting the cloudy 10,000 foot view, or you’re up close to a bus stop where citizens wait, frozen, to go to school, work, or off-the-clock activities, Soviet Republic is enthralling. It won’t hold your hand. As par normal for early access games, the developers are busy developing the game, not writing tutorials. Too many things can change from now until launch to be spending it baking tutorials. But it meant, once I gave up during this game session or that one, that I had to spend plenty of time at my own day job sneaking videos of hints and tips made by other smarter-than-me people playing the game.

There are dozens of residential buildings, all prefab or brick, and all sporting that washed-out off-white Soviet Bloc color. The architecture is unabashedly brutalist, oatmeal bland, and, after you’ve been staring at it for however many hours, somehow starkly beautiful, too. There’s a workmanlike quality to Soviet structures. It’s an intriguing palette to work from, since U.S. cities (which I’m the most acquainted with) don’t look like these. These are structures I'd only expect to see in, say, the Metro series, or in DayZ. 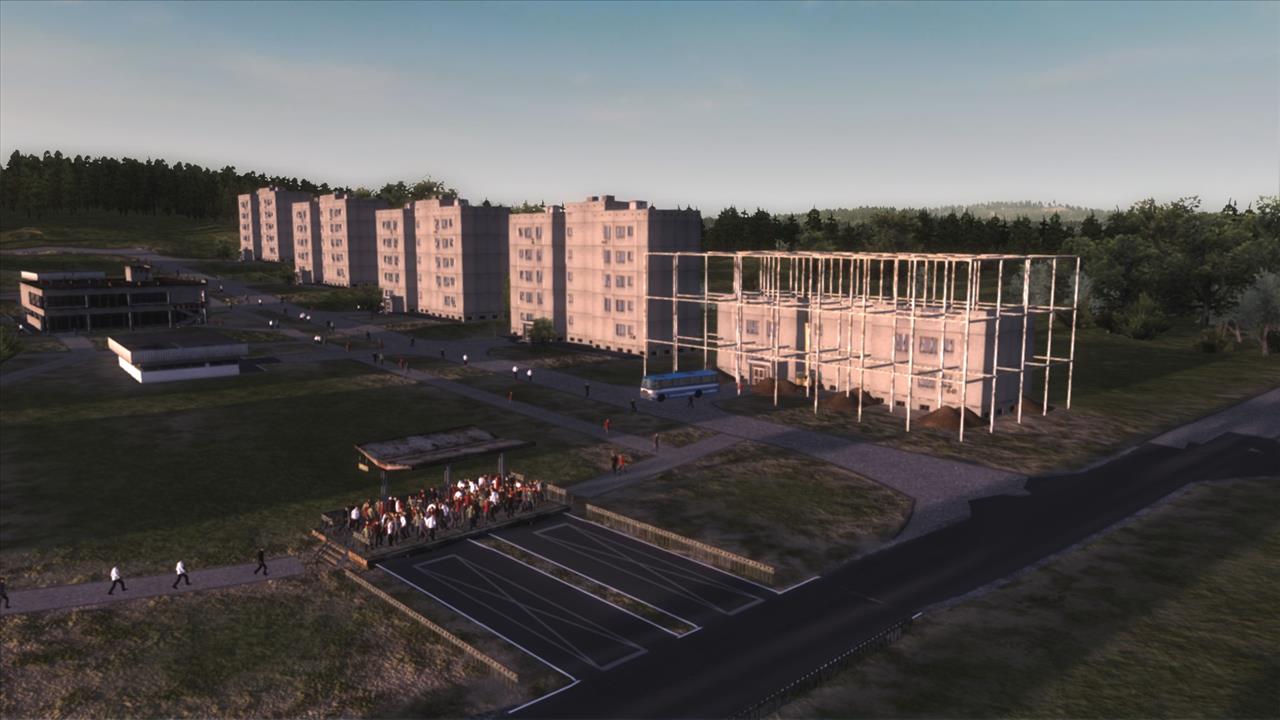 If you really want to get into the nitty gritty, Soviet Republic will let you. Boy will it ever. There’s an entire construction-related industry you can build up. So, instead of watching residences and factories and power lines go up auto-magically, you can build a construction office, stock it with a full suite of construction vehicles, and watch your construction vehicles very slowly build each and every part of the self-sufficient nation you’re working towards. That’s going to require more patience than any city-builder game you’ve ever played, should you go the construction industry route.

Soviet Republic’s hard mode is the Dark Souls of resource management sims. Incredibly specific. Again, very finicky. But learning those ins and outs is rewarding in a way I’ve never felt rewarded by other resource management sims. Hard mode, especially if you’re going the slow-as-molasses route and building everything brick by brick, slows things down in almost real-time, I swear. Hundreds of words have tripped out of my fingertips as I write this, yet my brand new agro-farm is not even 50 percent complete. That doesn’t count the grain silos they’re assigned to build next. Or the gas station at the end of the dirt road. Or the vehicle depot right next to it, so that when my tractors, combines, and trucks need maintenance, they don’t have to drive 35 km/h over mud roads to the next town in order to get an oil change. Heck, I can’t even upgrade from a mud road up to gravel road right now because that would close that road to construction, and they’d have to re-prioritize from building the farm to upgrading the road first. It’s insane. And makes perfect sense. And is also insane. 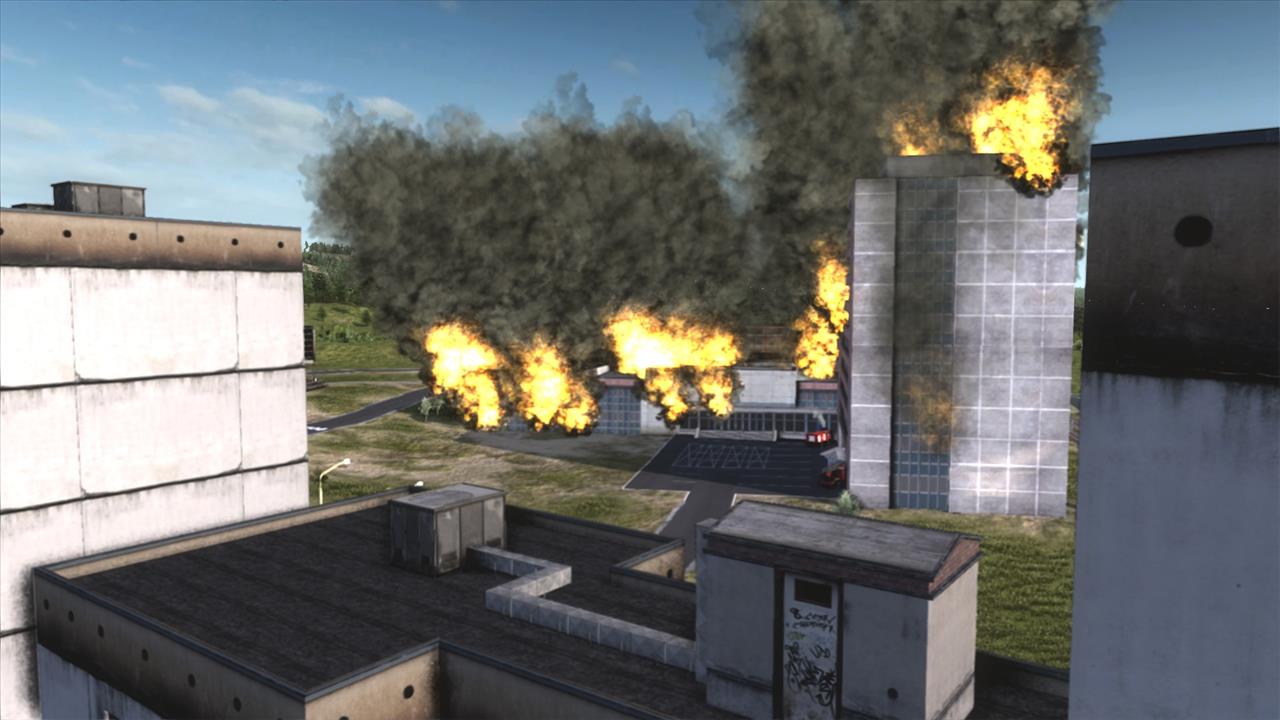 This speed makes me appreciate, and scrutinize, absolutely each and every decision I make, though. I’m not going to watch all of August 1971 go by, with the dump truck, passenger bus, excavator, and crane working 24 hours a day—then destroying all that work just to move it to a slightly nicer location a few feet to the left. After this much time investment, they’re going to have to make it work. Next time I’ll just have to blueprint it out a little more thoughtfully before jumping the gun on building things willy-nilly.

Workers & Resources: Soviet Republic’s gameplay is as unwieldy as its name. But it’s also the most impressive resource management sim I’ve played in a long, long time. I have nothing but high hopes for this one’s early access period. The developers have gone so wide and so deep that there’s not much more I’d want to see in that respect. Just some polish. Just some user-friendliness. But in this mind-boggling resource management sim, I’ve absolutely found one of my favorite games of the year.