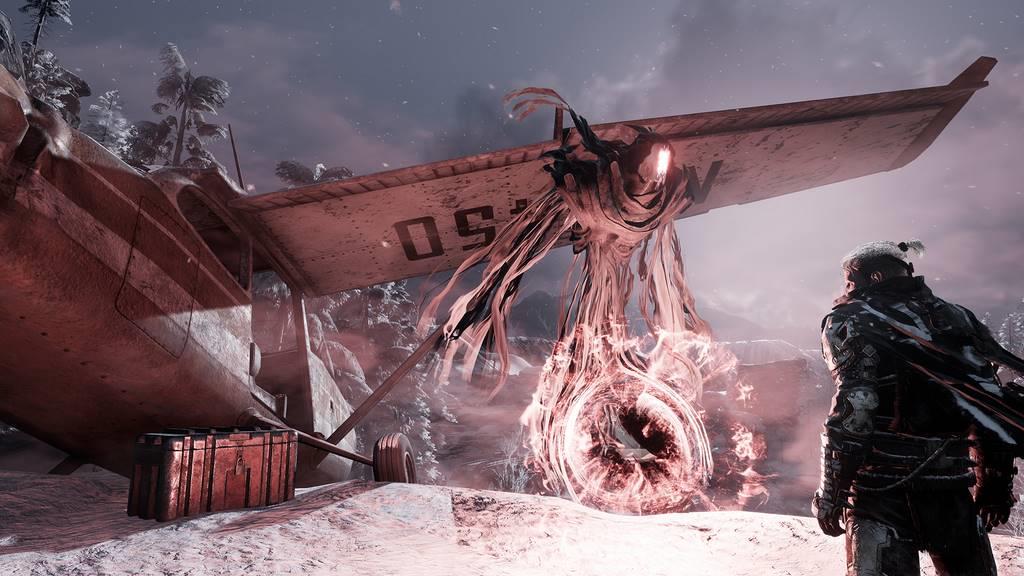 Initial impressions count. I dropped into Fade to Silence and couldn't shake the feeling that that antagonist who greeted my resurrection into this barren winter apocalypse was just a low rent Hades from Horizon Zero dawn in a Dementor cloak. Then came the combat tutorial where we find we've mimicked a soulsborne game only without any of the depth. It also didn't help that I was wall glitching before I even made it out of the resurrection cave and from there thrown into a cutscene where I was aghast to find the last-gen visuals of the characters and environment on full display. It's a bad start, but finally spills into the core game, a survival experience in a post-apocalyptic wasteland of snow and ice. The relics of our present civilization are there, abandoned huts for shelter, supplies to scavenge for and craft with, the wreckage of a car drops from the orbit of a mysterious Lovecraftian vessel that floats around the world, always watching from on high. But these relics and reminders are only that, as the world that greets us would actually much rather eat us. Survival is truly something to eke out through a careful balance of limited resources and time.

The gameplay loop in the survival sim is actually pretty solid. You have three meters in your HUD to mind. Your character will slowly freeze or starve based on how deep into the frost you roam or how long it's been since your last meal. But there's also one for the growing corruption and the continual forays of monsters into your basecamp when it fills up. Trek back for the defense and trek out again to push the boundaries of the map and try and "uncover the secrets of the world" or something to that effect that the trailers and press releases try and push. But the reality is the secrets of the world don't really narrate out at all. You just unlock a few wolves to hitch to a sled and then uncorrupt a few monster bases that can be used for fast travel and progress without a narrative driving the story at any point in that journey while trying to balance your resources for your expeditions and basecamp. Food and firewood are the primary concerns while picking up other tidbits to create more powerful gear, construct more buildings to unlock yet even higher level gear and set defenses agains the cycle of attacks.

However, around this largely satisfying survival loop persist those letdowns of the sub-par combat loop, the poor visuals, the lack of map variety, the lack of story progression and plot, and a void of meaningful choice. Along your travels you will hit seemingly randomly placed events where you can recruit new NPCs to assign to your basecamp or accompany you on your expeditions depending on their skill sets. But I failed to see any real meaning in the choice to let them join or cast them aside. Sure by joining you now need that much more food and firewood per day, but they also can be sent out to forage for themselves, and upgrades they can provide and construct make daily requirements lessen. So there is a little calculus to be done as to whether you can afford to take them on, but a meaningful choice? I didn't get that. 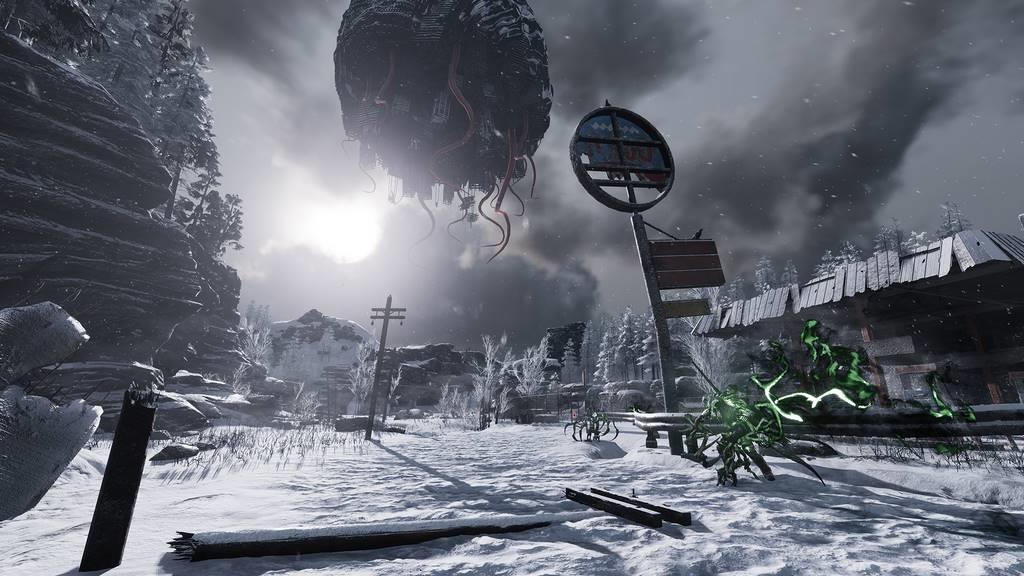 Nor did I ever really see the plot progressing. Sure the NPCs I picked up hinted at a backstory upon the initial meet and greet. Periodically throughout the play through they would request a sit-down by the campfire and divulge further details about that past, but there wasn't meaningful interaction in the discussion. There wasn't consequence to the world as their individual tales unfolded. It was just a bit of exposition about a timeline your character had no involvement with that took place long before those initial introductions and, frankly, I had little concern for as an audience. These stories all seem to focus on events after the flood, so to speak, after whatever happened that let to our present calamity. They didn't divulge clues as to the nature of this present tribulation or drive the main character to uncover its secrets. They were just one-off tales without a compelling reason to be interesting or a payoff for having waited patiently through to their long-winded conclusion. So while the story narrative for your protagonist, Ash, tries to all come crashing together at the end, all you really get for the majority of the game is the incessant buzz of the tormentor in your ear. The tormentor being that low rent Hades Dementor that resurrects you on death but spends the rest of your playtime chiming in with its grainy voice every time you go to open a treasure chest or encounter something new. But it's not a narrator, it's not adding plot, it's just chirping away and being rather tedious. Ultimately that is the way fo the story progression, alternating between the useless annoyance of a disembodied voice with the occasional interlude of a rather uninteresting backstory on one of your NPC campmates. Maybe there was meaningful choice at all: choose to leave your basecamp empty and you won't suffer the backstories.

Combat boils down to rote repetition of simple strategies of the same handful of opponents that rarely ever appear more than one at a time. You have a health meter and an endurance meter as well. You can afford a few regular swings before extinguishing the later, or alternatively a single heavy blow will just about deplete it entirely. You can also dodge-roll or block and face a handful of enemy types, with only the stalker being particularly quick. Some monsters can be overcome by just backtracking just out of reach in between heavy swings. Others require a timed parry with the block button to open them up for a one hit kill. Difficulty ramps up in later levels and the game itself never really hints at the strategies on how one might want to defeat the beasts. I guess what we really have here is clunky controls and ignorance of attack patterns passing for difficulty. There is just no precision in the combat. The attacks are mapped to thumb buttons not triggers and the whole little dance just feels unresponsive. 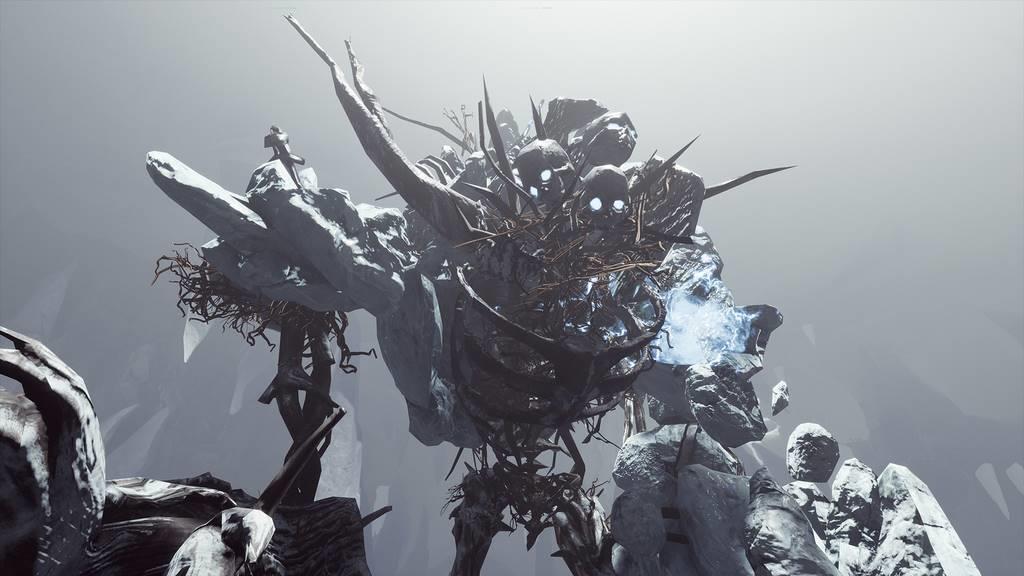 Now take that in consideration with the fact that death carries a real consequence. There is no manual saving or backtracking to previous saves in this game. You do have two modes, one is for keeps where you start with only a few resurrections possible, scarce resources, and new lives hard to come by. The other is more of a sandbox experience that removes the skill tree that gives you bonus in your next life but grants unlimited tries at the cost of disabling all trophy progress. It's basically a way to experience the story without the challenge and is a great space to learn to play a game that has little interest in showing you how to do just that. Come up with some strategies, put them in practice, and take what you've learned there back to the real game where death is for keeps, because you're never a few clunky swings and mistimed dodges in a poorly implemented combat system away from having to start over from scratch with your last life gone and a new game from scratch your only option forward.

Also consider this in the context that your biggest enemy is usually time. As you trek out you will slowly start to freeze and starve to death. Your only hope to stave off these threats are form regular meals and the use of firewood at basecamp and shelters but meagre resources turn the whole affair into a race agains the clock and its dwindling supplies. You will need to find capable followers and build the proper basecamp structures to fully upgrade weapons and gear for the endgame; but even the crafting by those NPCs is painfully slow, when they can even be bothered to stay on task. My biggest pet peeve was how incapable the NPCs were of staying on an assignment or even staying alive. I don't even want to think about how many times a nice, safe NPC with a warm fire in a cozy hut waiting nearby chose rather to just freeze to death meters from safety. Or how many times a task was left unfinished while the assigned camp member decided to instead fill their time with busy work wandering the camp or sweeping a floor. 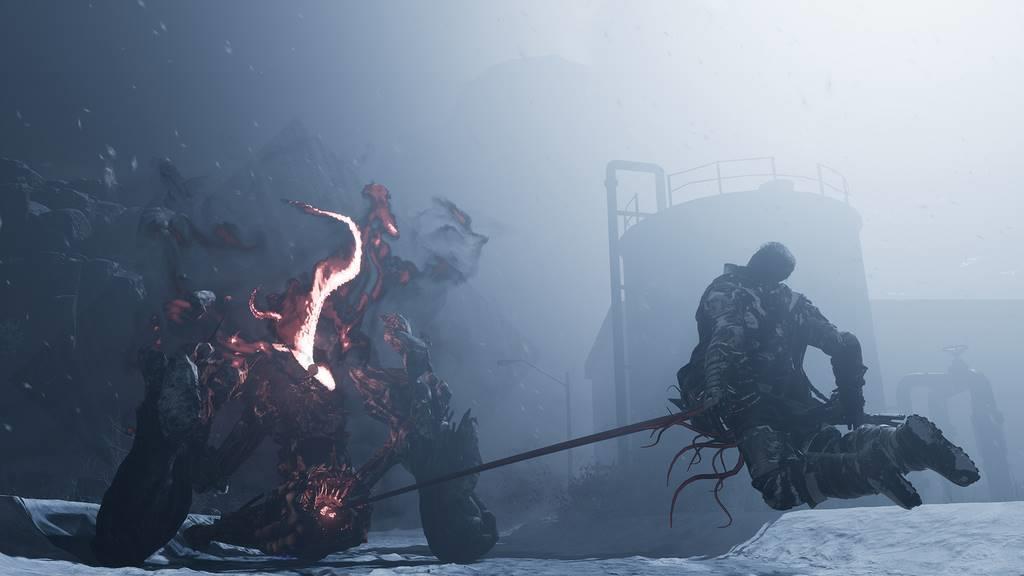 And perhaps more could be forgiven if the world really captured the desolate beauty of a frozen winterscape, but it really doesn't. The visuals look like something pulled from the last generation of consoles. It is the same assets copy pasted all around the game world, the same three colors in repetition over and again. Black, white, and red all over just a little bit. It's like a lightly sunburned Zebra you could say. Mostly bleak with the occasional corruption blighting that bleakness. Or perhaps maybe improving it... Audio wasn't much better, a real echo-y and distracting affair, with the crunch of your footsteps on the snow jacked up higher than any other peep form the environment except for the occasional rant by that tormentor that can't quite wriggle free from your mind who likes to chime in at a regular clip, never really saying anything of note, never really offering a positive spin to the experience, but ever-present and annoying none the less.

And don't even get me started on the inverted y-axis bug. You have the choice in settings to invert, but once you unlock the sled there is no option to do the same when riding it. It creates this jarring experience where every time you hop on and off that sled (which you will do often as you will need to disembark to collect resources or clear the way for the sled to progress), but every transition then thrashes your camera wildly across the screen as up becomes down and down becomes up.

In the end, what we have is a disjointed mish mash of some pretty obvious inspirations of both style and gameplay wrapped around a very competent core survival loop but put together with some decidedly last-gen audio and visuals. The sandbox system, giving you unlimited chances but ratcheting down the difficulty and stripping the rewards is actually a great feature. It really gives you the preview of whether the slog is worth it. The world does seem interesting at first but the story needed to be eked out and teased throughout to really compel folks to keep exploring but sadly just doesn't do that. So if you're a glutton for punishment in a survival game then there is something on offer here. But there are also so many other games that simply implement survival mode that end up much better experiences overall.

There is a decent survival gameplay loop at the core of Fade to Silence. It's just that everything that emanates from that core is either cheaply cropped from another game or poorly executed in this one. I just kept coming back to this feeling I was playing disjointed parts of these other games, not a unified experience of this one.