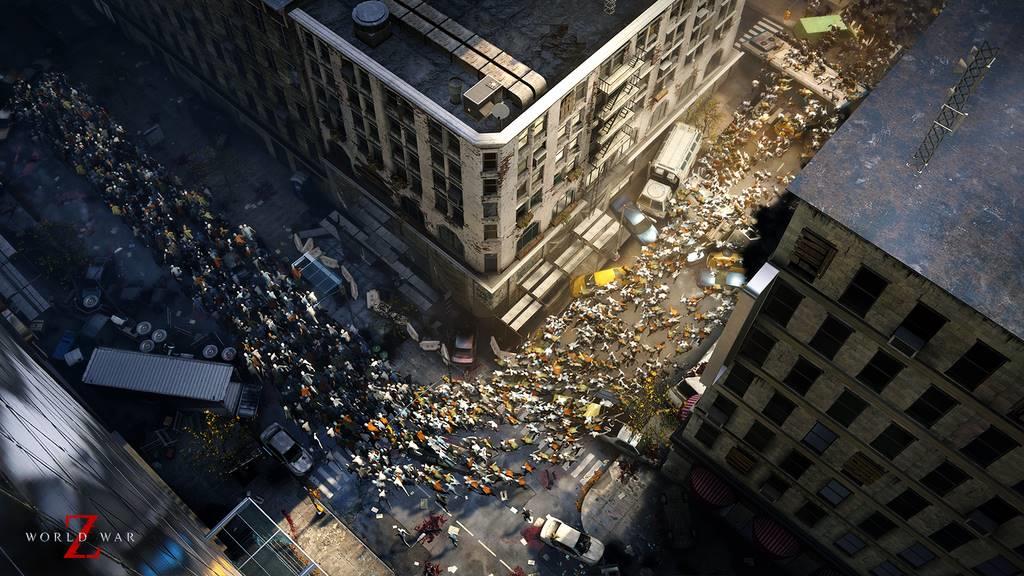 Why are zombie apocalypses so appealing?

I admit, sometimes I fantasize about what it’d be like to live in such a chaotic, base-instinct, kill-or-be-killed world. I think it’s so intriguing because it strips civilization of millennia of social, economic, and infrastructural progress. It’s like constructing an elaborate tower of cards—and plucking just one, toppling hours of work in a second. Although you can’t really test if Hollywood’s or whatever work of fiction’s portrayal of a zombie-world is accurate, I am a believer that chaos would unseat order and begin a termless reign.

For those contrarians out there who don’t think humanity would lose its collective mind, I point at two examples. First, Black Friday. People are willing to trample others with absolute disregard…just to pay a little less money for consumer goods—that they don’t even need. Second, have you ever seen a grocery store after weather forecasts call for snow storms? People scavenge food like a nuclear war is coming.

So you really believe undead maniacs who are hangry for your flesh wouldn’t have every living being hitting the panic button? You’re bananas, if so.

Saber Interactive has brought us the latest rendition of this post-apocalyptic scenario in World War Z. And if the world were to succumb to their interpretation of this doomsday environment, you better own an arsenal of weapons. And have some crack shot friends.

First and foremost, World War Z (WWZ) accomplishes what it sets out to accomplish: to provide a simple, intuitive third-person shooter that’s built around the concept of massive, undead hordes. This is WWZ’s bread and butter. 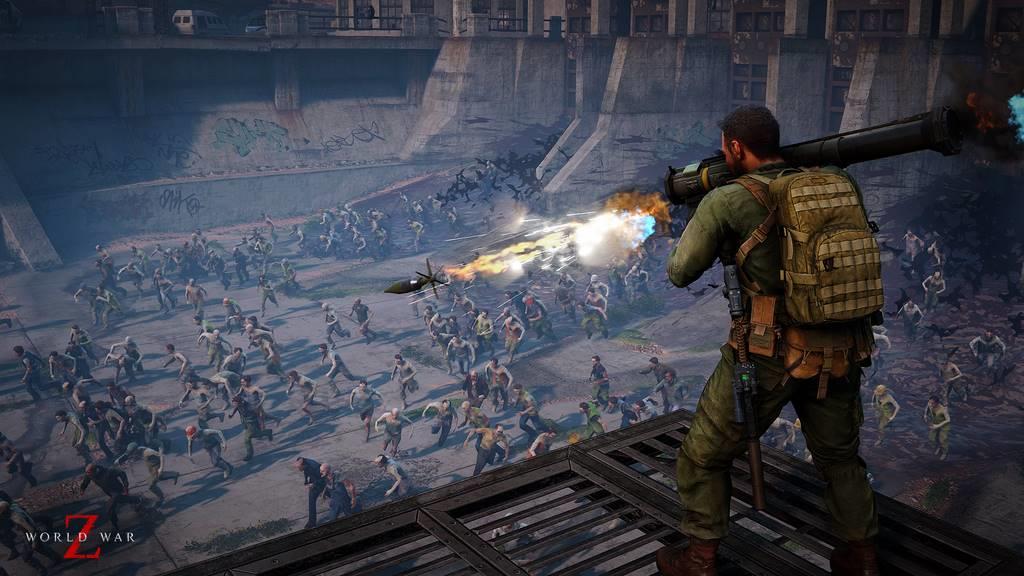 WWZ isn’t looking to wow you with an in-depth backstory and storyline—no, it wants your jaw to drop at the sight of tidal waves of hellraising dead guys. Employing the Swarm Engine, which supports up to 1,000 zombies on screen at once, WWZ aims for quantity over quality of opponent.

It elicits a nostalgic reminder of the Left 4 Dead series. WWZ’s gameplay and basic premise are similar. It’s a surface-level survival game with missions that follow the same predictable blueprint. Your average dead joe is fast and comes in masses, but he’s easy to take down.

The special zombies add a wrinkle to combat to keep you on your toes. There’s the Bull, who’s the heavy of the zombie squad, an armored SWAT officer who no longer lives to protect and serve. There’s the Screamer, who—surprise—screams to invite his zombie friends to your party, which is incredibly rude. Who could forget the Gasbags, hazmat adorned stinkers who will ruin a quality defensive position if you take them down too late, as they’ll spew harmful gas (unless you end them with a headshot). Then there are Lurkers, who you can always rely on to prowl behind corners, waiting for you to waltz by. 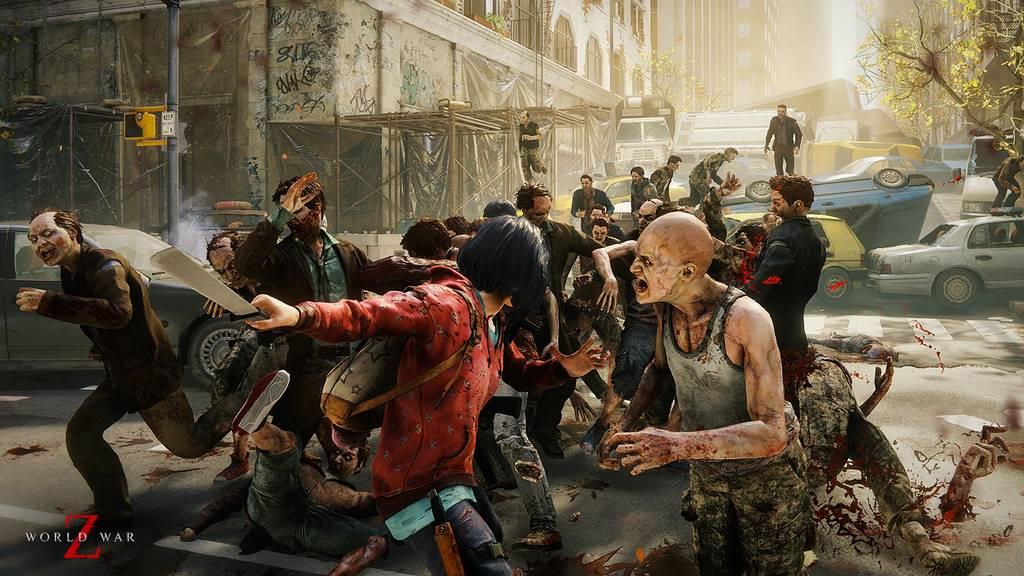 Your gameplay options are straightforward: offline/online co-op or online multiplayer. The “campaign” consists of four chapters, each with three episodes, that are spread across the world (New York City, Jerusalem, Moscow, and Tokyo) and do not tie together whatsoever.

Within each chapter, you’re presented with four playable characters. This choice is solely aesthetic. There’s no functional difference from character to character. Although you do unlock a mini-video of a character’s backstory if you complete a mission with them.

You can choose from six classes: Gunslinger, Hellraiser, Fixer, Medic, Slasher, and Exterminator. Each one specializes in an area of combat. But, from class-to-class, it doesn’t make a material difference what you choose. At the end of the day, it’s about killing lots and lots of reanimated corpses. 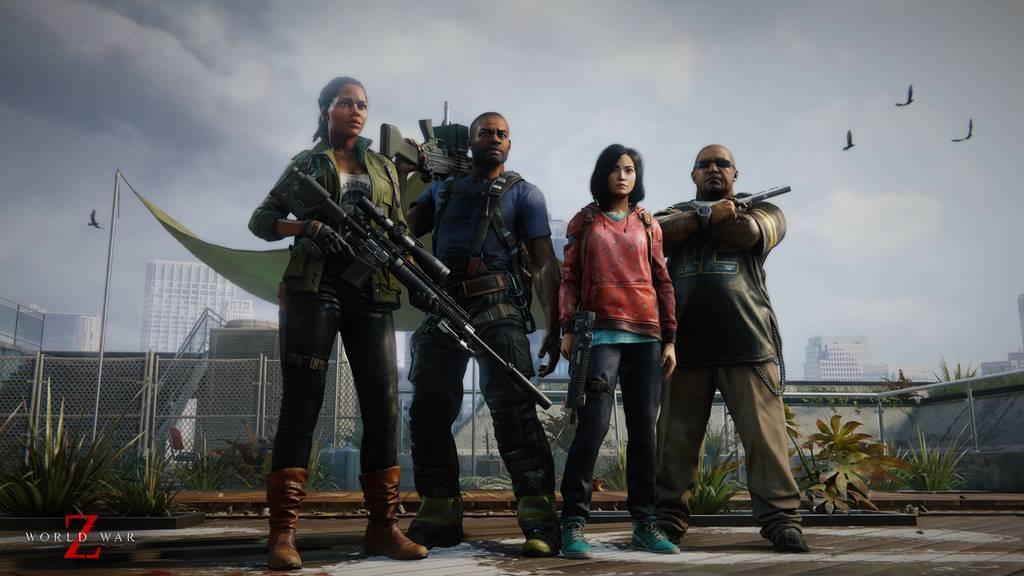 The controls are simple and intuitive so no tutorials are necessary, which is good as WWZ throws you into the fray. But don’t fret. You’re not alone.

Saber has enlisted competent NPCs to accompany you. They’re somewhat reliable shots and are quick to pick you up—most of the time. But I must mention this, because WWZ tracks your combat stats: NPCs refuse to aim for the head. Refuse. Not a single headshot throughout the entire campaign. Your NPC friends can get away with it, since WWZ’s zombies drop like flies. But c’mon, zero headshots? That’s like zombie 101.

Mowing down dead-sprinting zombies (see what I did there?) is the name of the game. You feel the urgency, the constant need to have your head on a swivel. There are times for creeping and cautious movement, but even in those moments, your adrenaline is still pumping. Combat is engaging and endless. But in all honesty, combat fatigue can set in. Being on edge for an entire mission is exhausting. But it’s a realistic representation of how this situation would feel. Darting from building to building, knowing the next horde is around the corner. It’s how I’d imagine a zombie apocalypse to be. 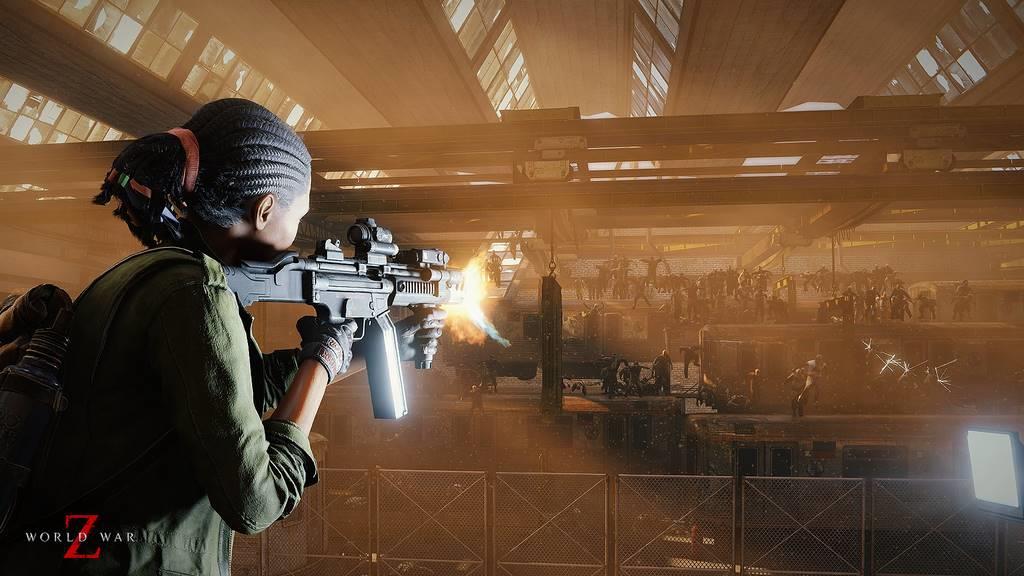 Speaking of hordes, imagine standing at the base of the Hoover Dam as it was beginning to crack. Except, instead of water, bursts of undead track stars with a will to kill start to pour out. That’s pretty much how WWZ’s hordes are. Your first horde experience is stunning. I found myself pausing in awe, admiring the scene. Instinct eventually kicked in, but man, you never forget your first.

Thankfully, WWZ supplies plenty of firepower to wipe them out. Weapons are scattered throughout your mission’s path and run the gamut, from chainsaws to explosive-round-packed sniper rifles. You can equip up to four weapons: a primary, a secondary, a heavy, and a melee for close quarters. Primaries are your main go-to weapon (i.e. ARs, shotguns, SMGs), while secondaries are there for backup (pistols, grenade launcher, sawed off shotgun). Heavies are for clearing crowds and stopping hordes in their tracks. These weapons make or break your survival, but they have limited ammo that can’t be restocked. For your standard guns, ammo isn’t at a premium, but that doesn’t mean shoot for the sake of shooting. Your machete (or shovel) will only get you so far through a horde.

Your guns level up with use and are categorized into three tiers. Higher tiers have higher quality guns with more damage, deeper penetration, and better handling/accuracy. Pro-tip: Penetration is the key to maintaining control over a flood of undead. As you pop zombies and finish missions, you’ll unlock gun variants like grips, silencers, etc., for purchase via game credits, which are earned after each mission or online match. These credits are the basis of WWZ’s customization system. 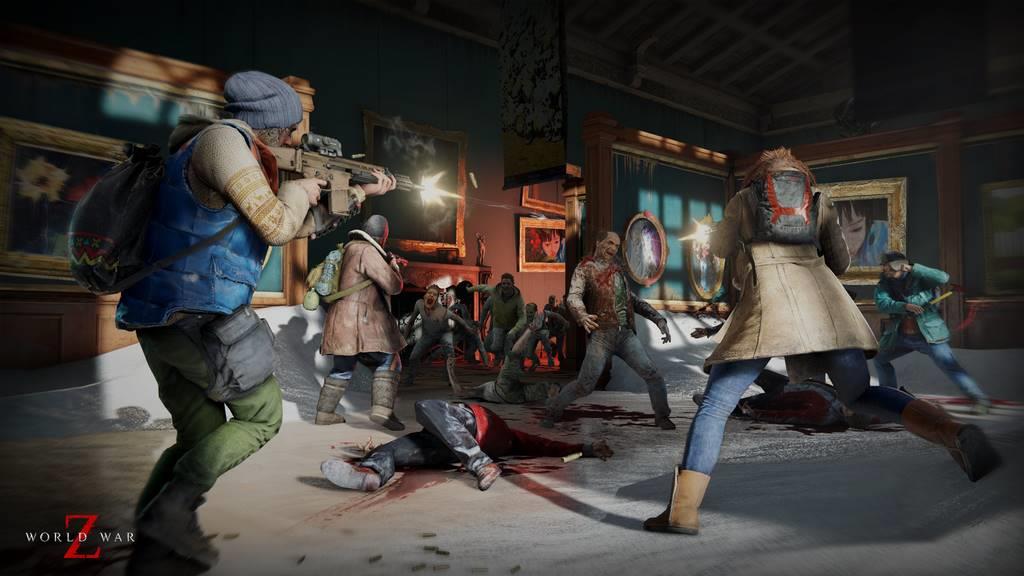 Although WWZ accomplishes its main objective, I believe Saber could make a few tweaks that would materially improve overall gameplay.

First, why can't you pause?! Excuse me for shouting. I understand why you can’t pause online gameplay, that’s obvious. You can’t just interrupt everyone’s game because you’re inconvenienced. But why oh why can’t you pause during offline gameplay? That bewilders me.

Last but least (and I do mean least because it’s not a big deal when considering the theme of the game), stealth is not a realistic approach within WWZ. That doesn’t come as a surprise, but sometimes this can be a little annoying. For example, if you’re looking to proceed undetected through a street full of loitering zombies, well...good luck. You can play it cool, pop off stragglers one-by-one. But WWZ doesn’t like when you take it slow. You’re guaranteed to trigger waves of zombies even if you don’t make a sound. WWZ is a loud-and-proud, spray-and-pray shooter. Again, this game owns that, so it’s hard to be mad about it. But I think it’s worth noting.

World War Z doesn't hide its intentions. It's not a layered, in-depth survival sim. It doesn't try to be anything it's not. It's built around the horde effect, which it nails. They're like train wrecks: you can't stop watching them—except the train is headed straight for you.