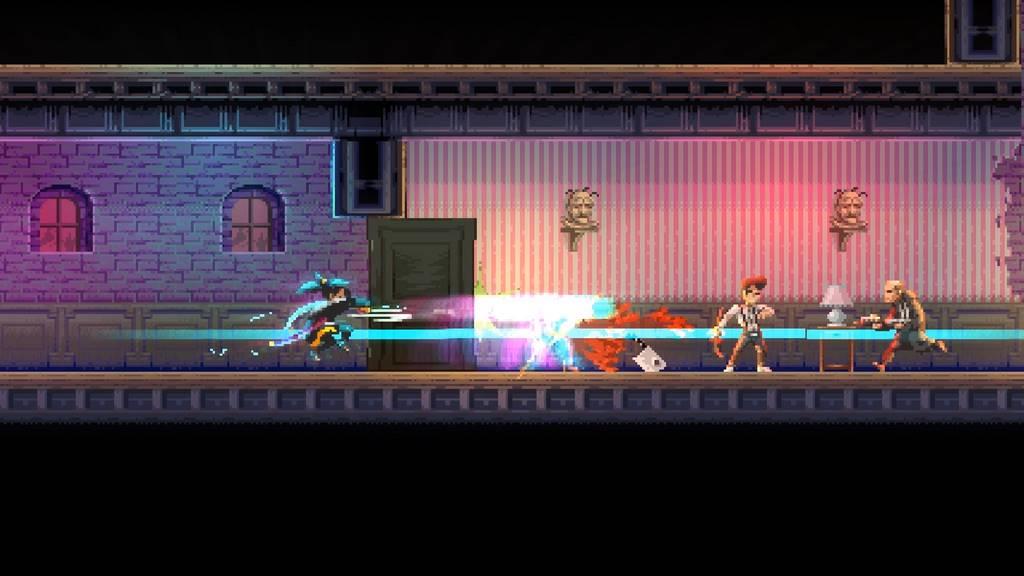 A while back when watching an event on Twitch I kept seeing ads for an upcoming game called Katana ZERO.  Naturally with it’s retro-styled graphics I was immediately interested as I’m a sucker for anything that uses sprite-work similar to the NES and Super NES eras.  It also helped that the game kind of reminded me of Ninja Gaiden at first which is a notoriously difficult game.  Granted I based that on seeing someone running through the streets with a sword, but after playing it a bit it’s not really like it at all.  Still, I’m always up for a trip through the world of retro-styled games so let’s take a look at Katana ZERO and see if the game is any better than that mess of an intro.

The game begins with a small tutorial stage that teaches you the mechanics of the game while you’re on an assignment from someone.  Aside from normal movement and slashing with your sword, you have a couple of special techniques at your disposal; slowing down time and dodging attacks.  Performing a rolling dodge lets you dodge enemy attacks, including bullets and lasers.  However, bullets tend to come out rather quickly, which is where slowing down time comes in.  Slowing down time gives you plenty of time to react to bullets by either roll dodging them or you can slash at them and deflect them back at whoever fired it.  You have a limited amount of time that you can slow down before you have to wait for the meter to recharge so use it sparingly.  You also have a limited amount of time in which to complete each area, but outside of a couple of areas where stealth is involved, the time limit was rarely ever a problem for me.

While the tutorial stage is on the easy side, you will eventually die in this game which happens in a single hit.  Afterall death is inevitable but it doesn’t have to be permanent.  When you die you’ll simply restart the current area from the beginning.  Something you’ll notice when you first start the game is the TV/VCR motif you’ll see from time to time, from starting a new game to choosing Continue and plopping a VHS tape into a VCR when picking a stage to go to and choosing where in the tape to go to so you can continue where you left off.  Most of the areas in each level begin with what appears to be a video recording and ends with a replay of your successful attempt to reach the end of that segment (minus whenever time was slowed down which looks pretty cool).  It’s a nice addition to the game and if you’re negatively affected by those effects, they can be turned off in the options menu. 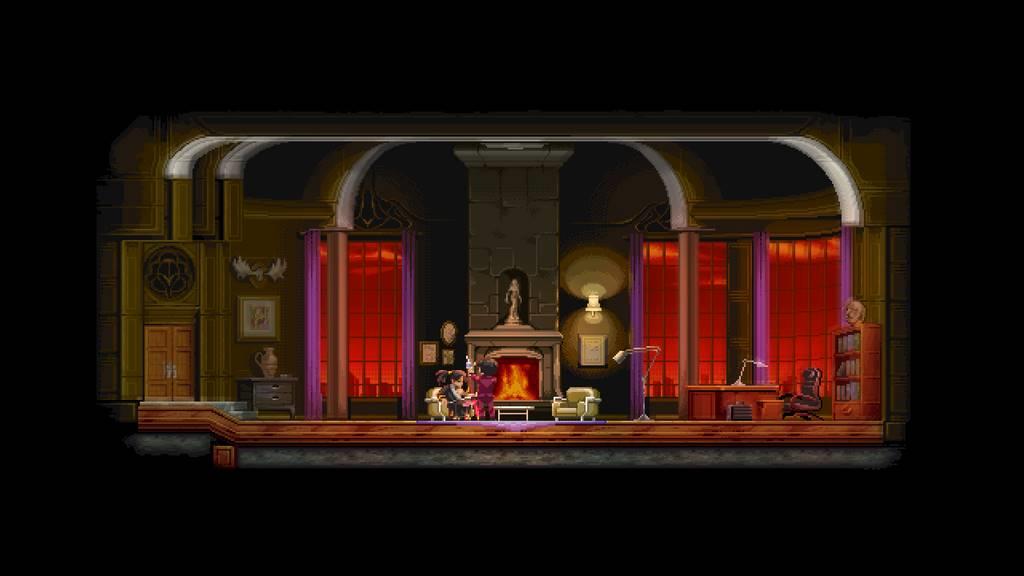 Yhe story starts out fairly simple and then gets a little crazy as the game progresses.  The first few areas start out with you talking to a psychiatrist about recurring dreams you’re having as you try to figure out what they mean.  After that you’re given a dose of medicine followed by an assignment, sometimes with specific instructions about how to handle the mission.  After that you’re on your way.  The medicine you’re taking is called Chronos and it prevents you from dying…well you die, but you then relive that same moment again, but this time with knowledge about what just happened (shown in the game as the video recording rewinding and letting you record the segment again).  As you get deeper into the story you learn more about Chronos, who you are, and that combined with the dialog really helps this game earn its M ESRB rating…I’ll just leave it at that.

Another mechanic that makes Katana ZERO interesting is that you can somewhat influence the story based on how you act during certain missions and respond to various dialogue.  Throughout the game you’ll have to respond to the current conversation and you’ll see a red and white meter appear at the bottom of the screen.  While the meter is in the red you can interrupt whoever is speaking and (usually) respond with whatever response is shown below the meter.  You can also wait until the meter is in the white to respond, erring on the side of civility so to speak, and you’ll usually get a couple more possible responses.  How you respond can shape the story in certain ways, though sometimes it may be better to be aggressive while others it pays to be more patient with your response. 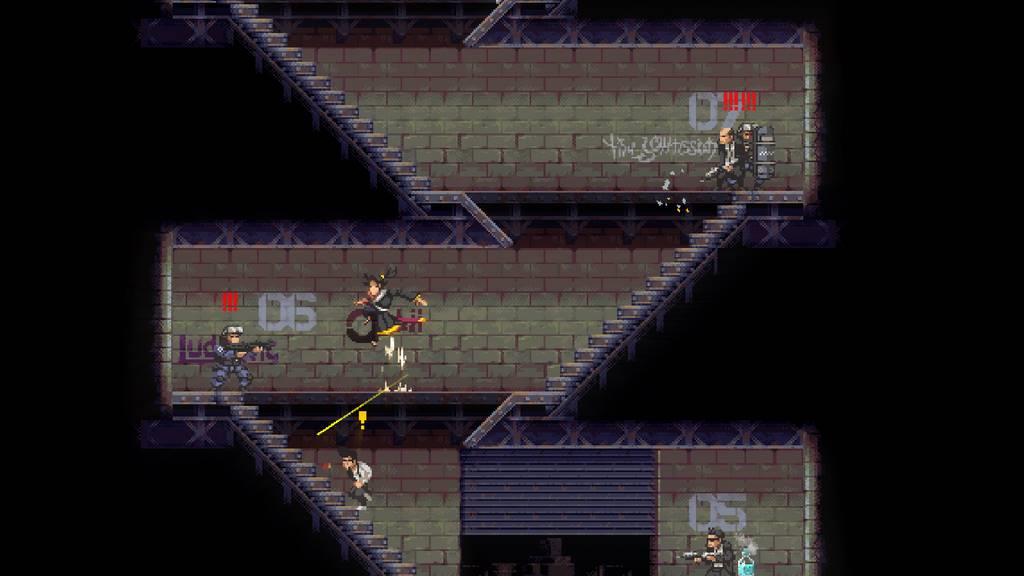 Graphically the game looks pretty good and the music fits the mood of the game.  In fact, at the start of each area you look to put a cassette tape into a tape player to play the music for the stage with the title of the track showing at the bottom of the screen.  This kind of had me hoping you could actually use your own music for the game, but outside of possibly editing certain files on your PC I didn’t see a way to do this.  I could think of a few tracks on my PC that would fit in nicely with the theme of the game, but I’m still happy with what we got.  Control-wise everything feels pretty fluid to where if something goes wrong, it’s your fault and not the controls.

The early stages aren’t too difficult as you get your feet wet with the controls, mechanics, and how the game operates in general.  Later on though you’ll have to think quickly on your feet about where enemies are, how they move, when best to attack them, and how best to attack them.  Some stages have objects you can pick up and throw at enemies such as a meat cleaver, Molotov cocktails that can also blow up explosive barrels, a statue that produces a cloud of smoke that will conceal you for a few moments, and a couple of other things that you can just throw and knock enemies out.  You also have to be aware of your surroundings as nearby enemies might hear the commotion you’re making while you’re taking out their comrades.  Some stages also have doors that enemies can use to travel between floors and sneak up on you, and a lot of enemies in later stages have guns and while you can deflect bullets with a well timed sword strike, some enemies carry shotguns that fire in a spread and the spread of the bullets is random.  You can try to knock a bullet back, but you’re also likely to get hit with one of the other ones in the process. 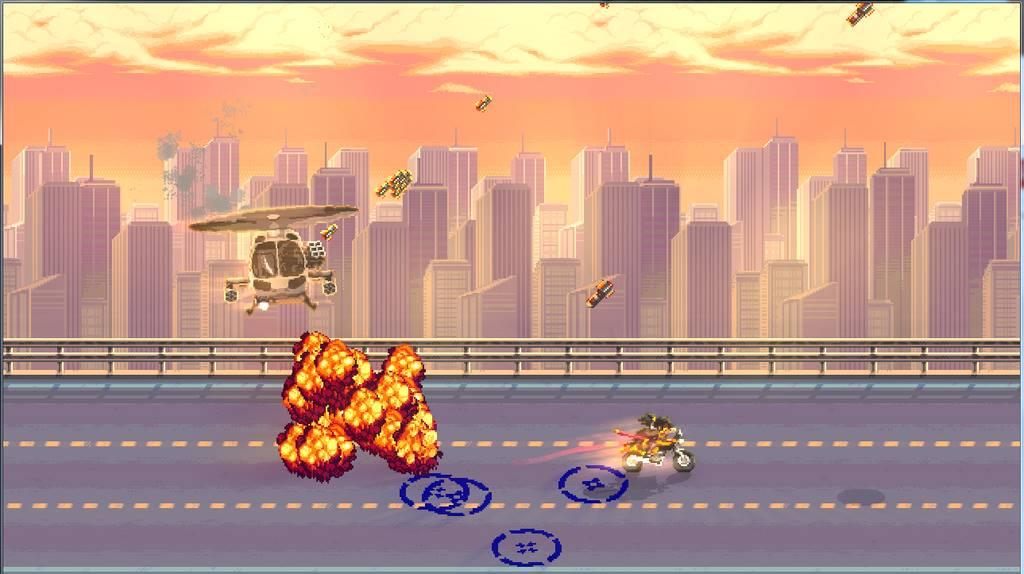 My only major complaint is that there are a few times in which you think the stage is over (you’ll see GO appear indicating that all enemies are defeated), only for a couple more enemies to show up right as you get to the exit for the area and kill you, forcing you to start the area from scratch.  This only happened a few times thankfully, but it was still an annoyance nonetheless.  One of them was in an area where I made many attempts before I finally was able to see those nice pink letters that said GO.  I ran towards the end only to be greeted by two more enemies that shot me down almost immediately, forcing me to restart the entire area.  Again, I’m thankful it only happened a few times and once you know it’ll happen, it’s easy to handle, but the first time it happened in each area it just felt kind of unnecessary.

Katana ZERO was a game that I was interested in from the first time I saw the trailer for it and it didn’t disappoint.  While there can be frustrating moments, nothing is impossible though it may definitely seem that way in some stages.  I firmly believe that my success in several stages was due to sheer dumb luck on my part as enemies moved in just the right way during an attempt that I could take them out nearly simultaneously.  Other times I ran out of slow down time and was mashing the dodge and attack buttons and somehow didn’t die.  I have yet to play a game published by Devolver Digital that I didn’t like and they and Askiisoft did a great job with this one.  The graphics look great, the soundtrack sets the mood for each stage, the controls are nice and fluid, and everything clicks pretty well for the most part.  If you’ve been thinking about giving Katana ZERO a shot, I’d definitely recommend it.

Katana ZERO is a game I’ve been interested in from the moment I saw the trailer for it and once again Devolver Digital and Askiisoft didn’t disappoint.  From the nice graphics and awesome music, to the  fluid controls and the engaging story with different ways to respond to dialogue and take out enemies in each area, Katana ZERO was an enjoyable game from start to finish, even with the story getting a little bonkers after several stages.  Then again, it’s that bit of craziness that kept things interesting throughout the game and I’m perfectly okay with that.